Hey there, friends!  Sorry for the radio silence over here but it’s been a busy week!  I worked at Sweet Clover Friday, then worked at J. Crew Saturday, Sunday & Monday, and on top of that have had a sick husband and sick kids, a birthday dinner out for Emmy.  Everyone is keeping me on my toes these days!  I was off from work yesterday and decided to take advantage of it by making progress on the nursery so I wanted to share a little glimpse of that with you today.  Also, Now that we have less than 4 months to go, I’ve started bargain shopping for baby supplies and wanted to share what I’ve purchased based on reviews, consumer reports, and friends’ opinions, as well as how I’ve gotten the best deals possible on several items.  Aaaaaaand, just to tease you, I wanted to let you know we’ve settled on a name and we’re all happy with it! You’ll have to wait until May for that bit of news. 😉  (This post contains affiliate links).

With my day off yesterday, I set to work on painting the walls.  To be honest, I was repainting the room in the same white as it already was, but after 6 years of use and Emmy putting boogers on the walls (um…. true story!) it needed a refresh to brighten up its dingy look.  The nook had been painted black when I redid Emmy’s old room a few years ago, and with the new nursery plan, I repainted that as well in Benjamin Moore Hale Navy.  (If you want to read about the method I used to make these shelves, click here). To save money, I just used paint that we already had on hand from other walls of the house.  Once everything was dry, I styled the shelf nook using items we already had as well as books I saved from when Sawyer and Emmy were little… books I look forward to reading to our littlest man.  I hung my Ore & Wool wall hanging at the top of the nook.  I had planned to use it elsewhere but I loved how its colors looked against the navy.  Lastly, I hung my Declaration Home flag above where the crib will sit.  I snapped this and shared it on instagram yesterday… 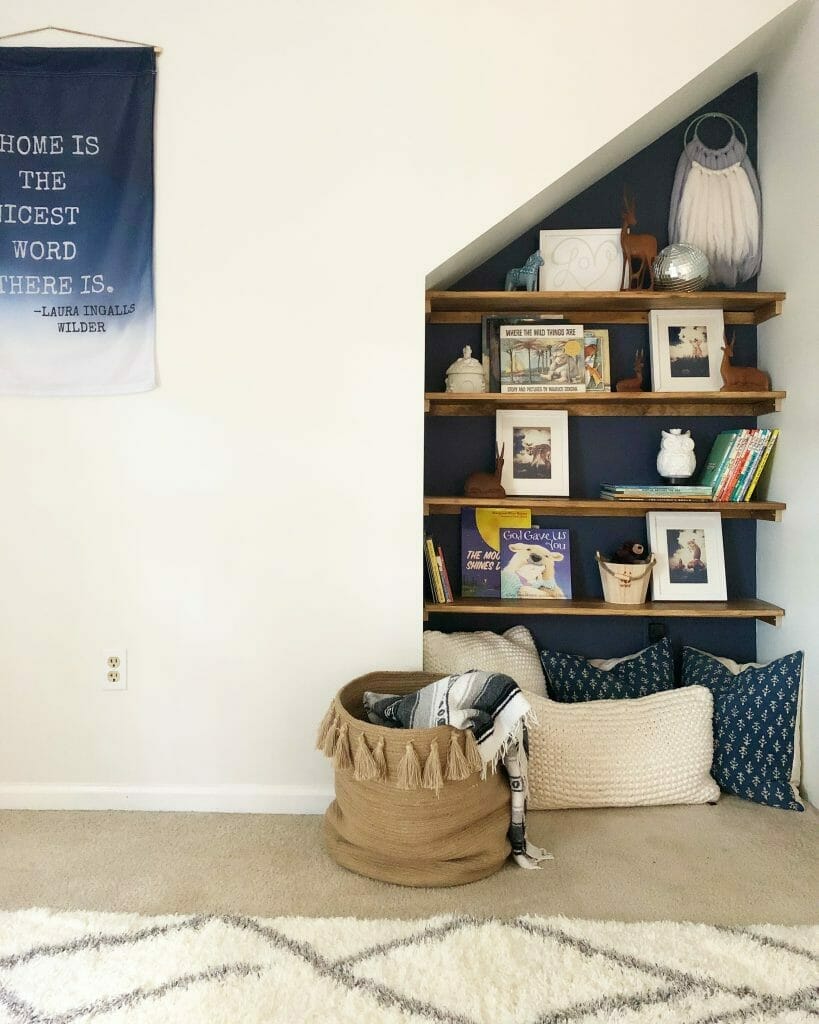 As you can see we have those ugly almond colored outlets, so I am hoping to change those as well.  I also want to give a shout out to Jackson Carpet Cleaning who came and cleaned the wall to wall carpeting as well as the brand new area rug that Chris had accidentally spilled a potted plant on.  They did an amazing job!  The carpeting has never looked so good and the area rug once again looks new.  If you are local to the Frederick, MD area, I strongly recommend them.

With just over 15 weeks to go, and only a couple left in the second trimester, it was about time to start getting things in order, and having the walls painted has helped ease my mind.  I know this time will fly by quickly, and I want to be prepared.  On top of working on the nursery, I’ve been getting the odds and ends together that we will need.  I want to get the best possible items for our baby, but I also want to be as thrifty as possible, and I am never opposed to buying used.  However, buying preowned takes research and patience… you have to wait for those right pieces to come along!  As soon as the new year hit, I started researching and shopping used, giving myself time to find exactly what I wanted for a good price.

The first big ticket item I’ve checked off the list is the stroller.  After researching, I decided that the Baby Jogger City Mini GT was the stroller for me.  It can be used as a jogger, is relatively compact, and can be used with an infant car seat with a converter kit.  It also has great reviews, which I read through.  I really wanted to get one stroller and have it work for all of our needs rather than a new one for each stage so I was excited when I learned about this version.  At $360 new on Amazon, it wasn’t an exorbitant price given everything it could do for us, but since I had time I decided to shop around. I took to craigslist and Facebook marketplace and searched every day.  As luck would have it, one popped up on Facebook marketplace brand new and still in the box for $225!  I met the owner at a grocery store parking lot and she had purchased it and never even took it out… she bought it because her sister had raved about it, but then she just used what she already had and never bothered to open it. We saved over $125, and have ourselves a pretty teal brand new stroller.

The second bigger ticket item I shopped for after researching was the infant car seat.  The one that friends repeatedly mentioned and popped up on the top of all of the consumer charts was the Chicco Keyfit 30 car seat.  I had asked for opinions on Facebook as to what car seat was the best, and a friend reached out to me that a good friend of hers was selling hers with an extra base for $85.  I normally wouldn’t purchase a car seat used, but it came from a trustworthy source, and saved me about $170.  Asking friends for tips in what to buy led me to scoring great deals! 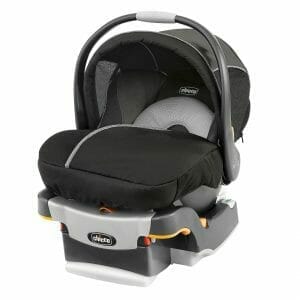 When I had Sawyer and Emmy years ago, I was a big time Baby Bjorn user.  Back then, that was pretty much “the carrier” to use.  I wore mine to walk the dogs, vacuum the house, shop, and basically just survive and be mobile!  Since then, there are many more comfortable and stylish carriers on the market.  Nowadays, there are also carriers that will hold newborn babies, and the Bjorn, as I recall, couldn’t be used immediately.  After researching I narrowed down the carrier I wanted to the Tula Free to Grow (which can be used from 7-45 lbs) or the Ergobaby but with the latter a separate insert for infancy needs to be purchased.  I decided that the Tula would last me longer, and I heard from several moms who swore by it.  Just as with the stroller, I constantly shopped Craigslist and Facebook marketplace, and finally exactly the one I wanted, black with gray stars, popped up on marketplace, and I purchased it for $100, saving myself $60.  I just hope that baby and I look as cute as this chick when we sport ours, but most likely I will be unshowered with no makeup and hair in a schlop on the top of my head, wearing a baggy tee with spit-up stains and sweatpants.  I’ll probably be wearing my glasses, but the similarity will stop there. 😉

Lastly, I wanted to share a few of the things I’ve purchased new from Amazon with gift cards we got for Christmas.

Isn’t it funny how much can change in regards to baby gear in a matter of 12 years.  Way back in 2005, I remember Sawyer having that huge plastic ugly vaporizer in his room… it served its purpose, but what an eyesore!  These days, oil diffusers are all the rage, and can be used as humidifiers as well.  I found this adorable little white ceramic owl diffuser that serves as nightlight if needed, diffuser, and humidifier.  I plan to use lavender in it at night to calm the baby, and the nightlight will be handy as well when he’s older.  It also fits right into our decor, and you can even see it sitting on a shelf in the photo I shared above.

With two older kids, and two noisy dogs, something new to me this time is a white noise machine.  We never used one with Sawyer or Emmy, but I am thinking it could be a life saver for our busy mornings when the baby is sleeping.  The Big Red Rooster sound machine (what an ironic name!) has great reviews on Amazon as well as other consumer reports I looked at, and it’s relatively inexpensive at just under $20.

That’s all we’ve gotten so far, but we’re well on our way to being prepared, and that is a great feeling!  Now that the nursery has been painted, we’ll be placing some of the furniture this week and I can’t wait to pull some big pieces out of the garage where they’ve been patiently waiting.