Good Monday morning to you!  Hope you all had a wonderful weekend.  I had my first weekend off in a while and was able to make some progress on the nursery, relax a bit, catch up on a walk with a friend, finish a book, and take care of the mundane necessary tasks like getting an oil change.  Why is it that getting an oil change is so hard for me?!?!  Those adult tasks really kill me… I just want to make things pretty and have fun; is that asking too much?  And perhaps my apple doesn’t fall far because getting Emmy to tidy her room so I could shoot it and write this post was a bit of a job in itself.  I have been wanting to update you on her room for quite some time.  You may recall a little over a year ago I participated in my first One Room Challenge, and Emmy and I took on her bedroom.  At the time, I really thought I was embracing her “a lot of everything I love in one space” style, but now as she’s settled into her room I know that I was wrong.  Since that challenge ended, she’s added much more of her personality and stuff to the room and I wanted to give you guys an update.  This post keeps it real, and you can certainly tell that a real child with a creative soul and joyful heart lives here.  Are you ready to see her bohemian eclectic girl’s room one year later?  It might make some of you twitch, but I am learning to, very slowly mind you, embrace her maximalist style. (This post contains affiliate links).

Now, to prepare you, I asked Emmy to tidy her room so that I could shoot it, and I didn’t touch a thing.  I wanted it to be truthfully 100% authentically hers.  As of today, Emmy’s room now looks like this: 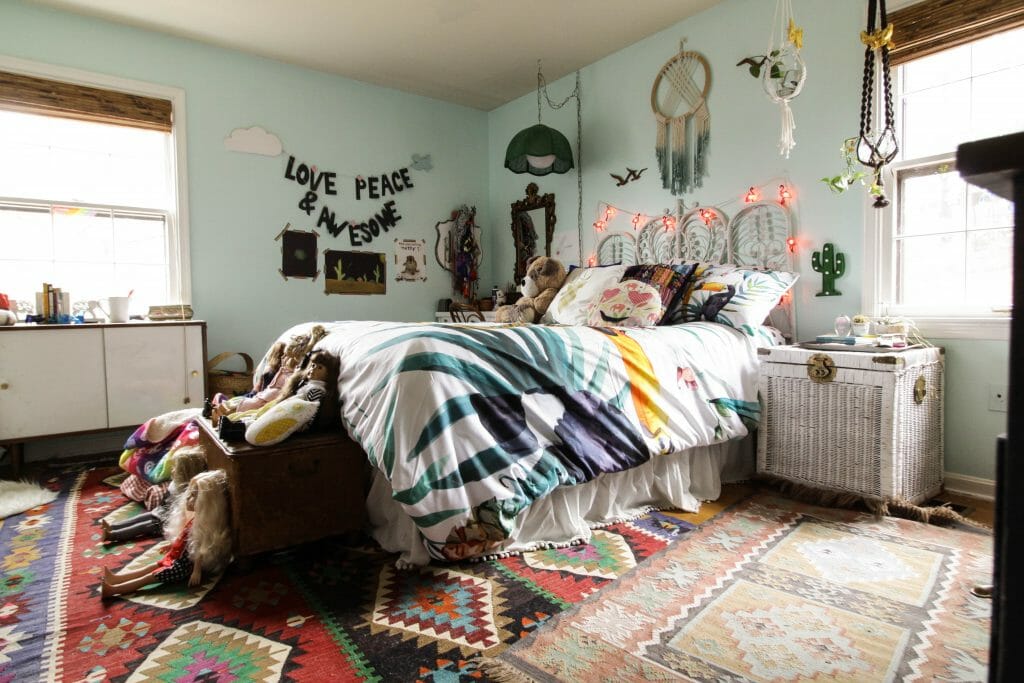 When we finished the challenge in November of 2016, it it looked like this: 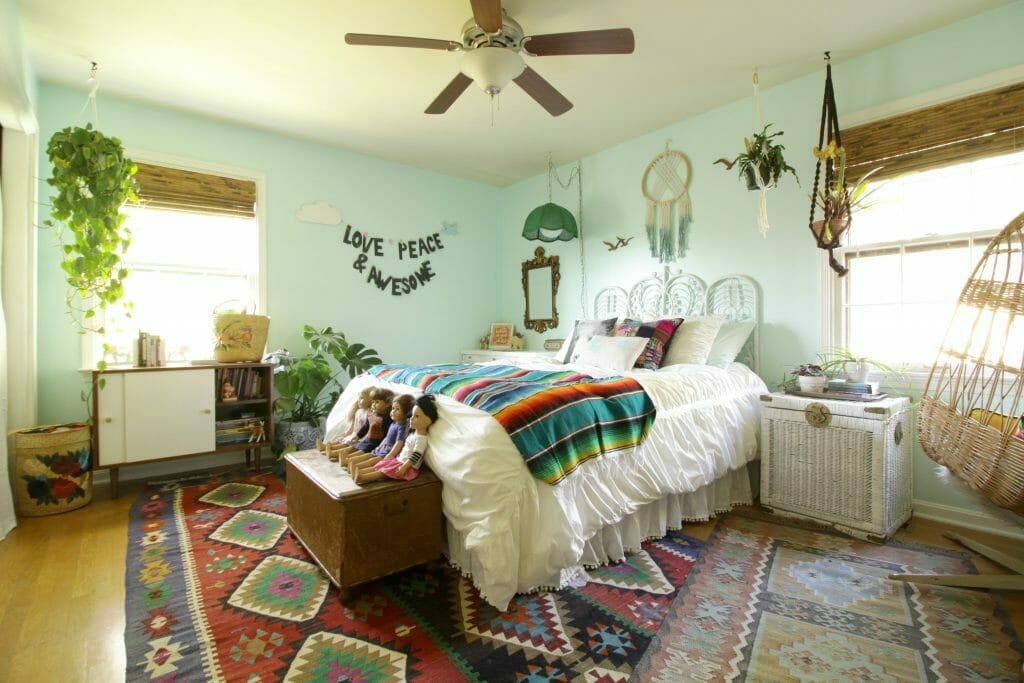 Aaaaaaaand, if you aren’t twitching yet, lemme just drop this photo here….. I took this on her birthday January 17th shortly after trying to walk in to give her a birthday morning hug.  I told her that day she was exempt from picking up, but then it was on.  However, I did a little kid-shaming on instagram because I couldn’t just let it go entirely, you know. 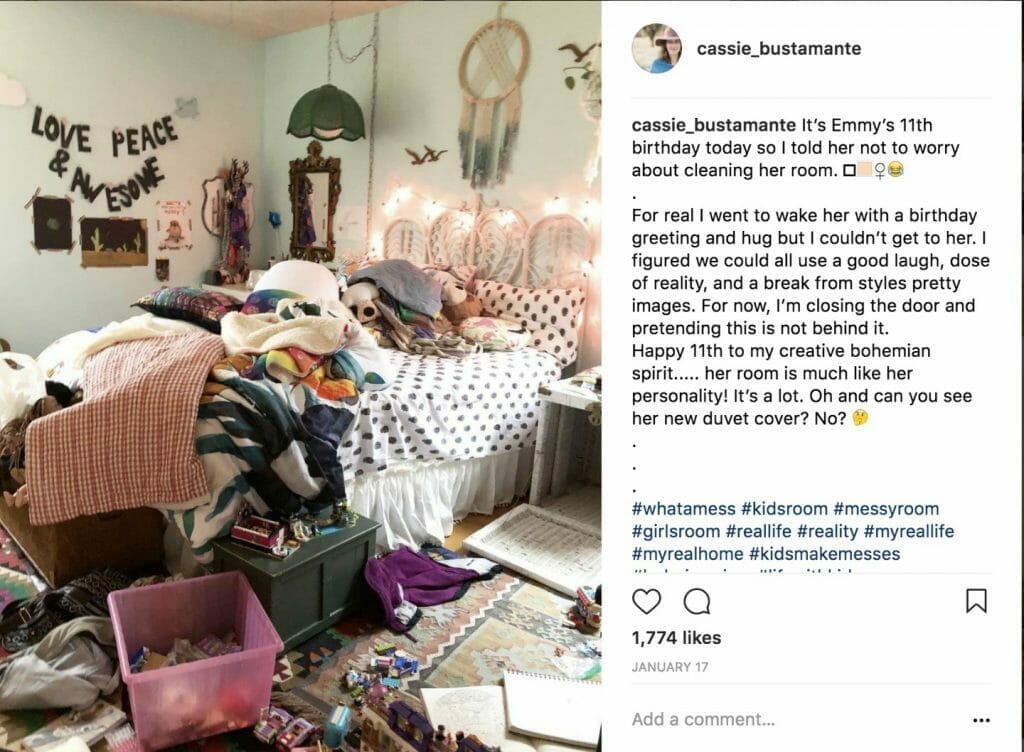 Now that I’ve burned that image into your brain, let’s get back to where we are today, with Emmy’s version of a tidy room as well as all of the new things that have been added to this space in the past year.  When we did the ORC, we used a white duvet cover that I had on hand.  However, we received a new duvet and she decided to remove the white duvet cover, telling me she didn’t like how bunchy it was.  I wasn’t comfortable with her having just a white comforter on her bed with no cover, and seeing her room above, I am sure you can understand why.  I was concerned about marker stains, or really who knows what?!  She and I looked together on Amazon at all sorts and I let her point me in the direction of what she wanted.  The cover she kept coming back to featured pineapples, leaves, and toucans (her favorite!), although on Amazon it’s called “tropical woodpecker.” (I can’t explain that one). 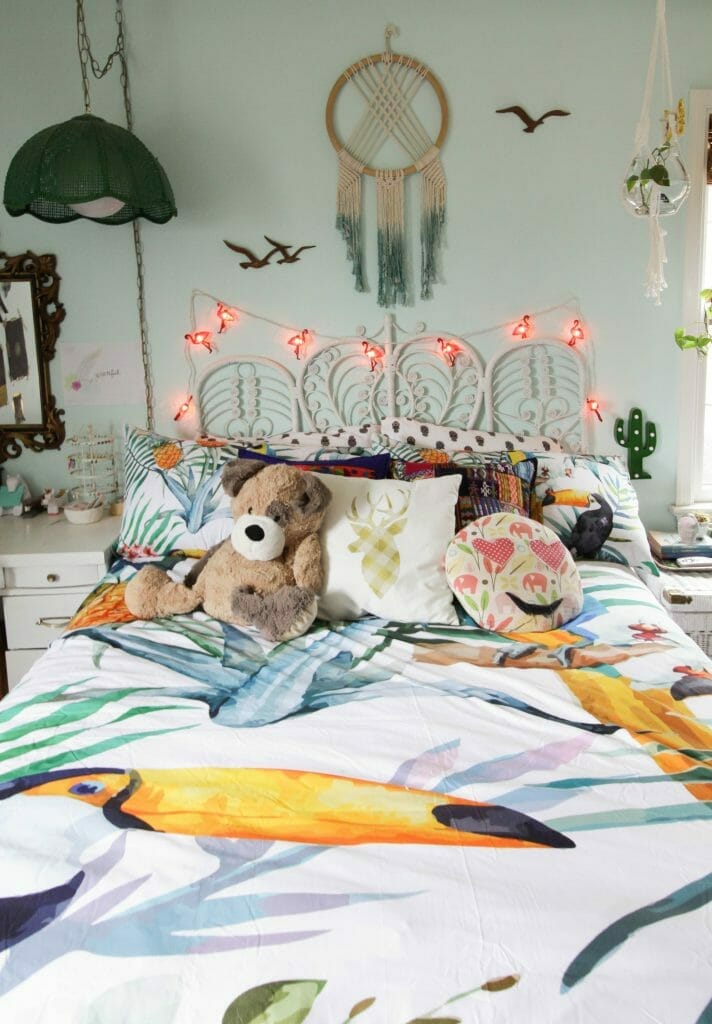 This duvet cover is bold, cheery, tropical, and definitely has a more artistic vibe to it…. basically it’s the perfect choice for Emmy.  We gave it to her for Christmas and she was thrilled to put it on her bed.  She’s also added pillows and stuffed animals to her collection.

Above her bed, new to us flamingo string lights add color and whimsy.  We found a few sets of these at a yard sale this summer, and she hung them in her room by herself exactly where she wanted them.  For h er birthday last year, Sawyer gave her a cactus marquis style light, and we hung it over her nightstand to serve as a little nightlight. 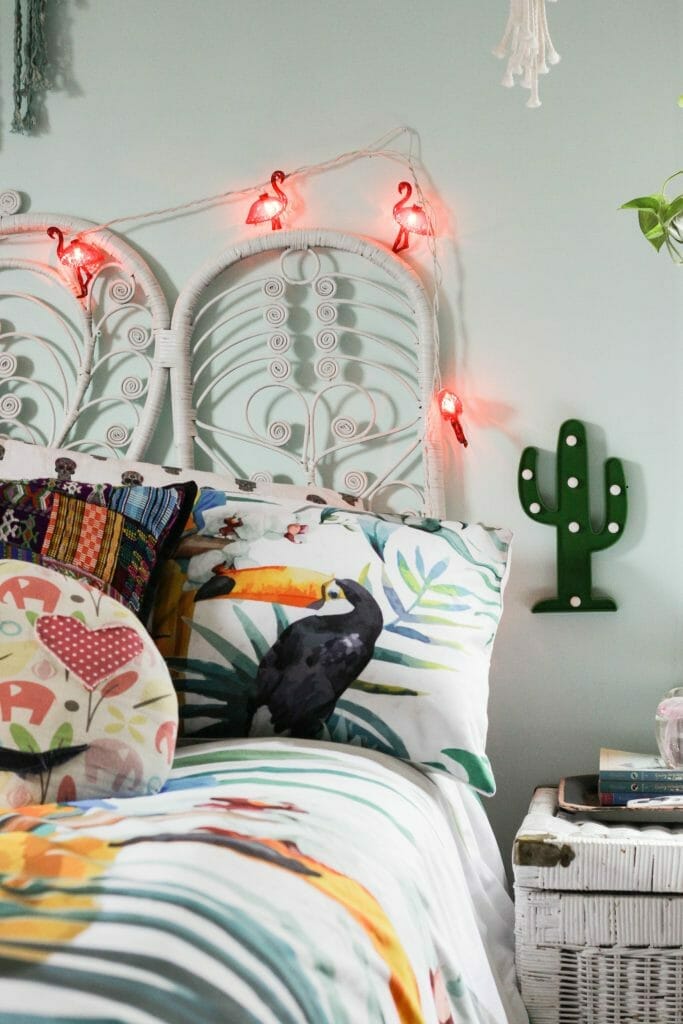 To the left of her bed, we added a new chair as she didn’t love the stool she had.  I found this bamboo one at a yard sale and knew she’s love it.  On the wall we added a jewelry organizer… currently you can’t see what the organizer looks like because in typical maximalista fashion, Emmy has a lot of accessories. I also kept the pencil sharpener plugged in for you because as I said, I wanted to keep it real. 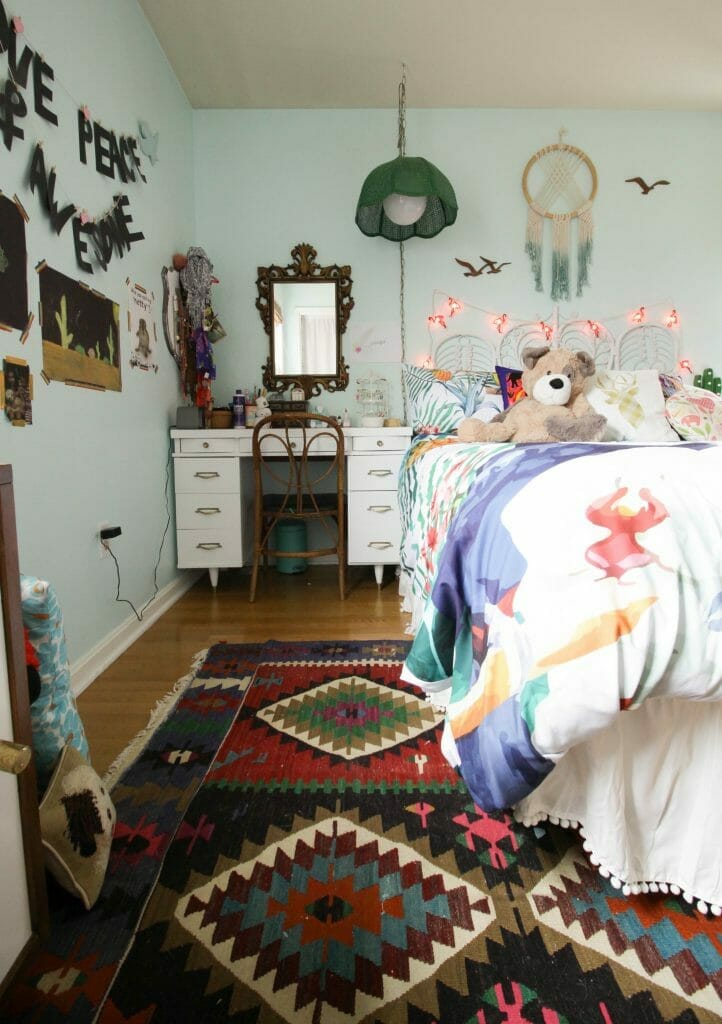 On the wall to the left of her desk, Emmy has added her own art work, a photo of her and her brother together (melt my heart!), and a cute animal poster from one of her magazines.  She used washi tape to hang them as she pleased. 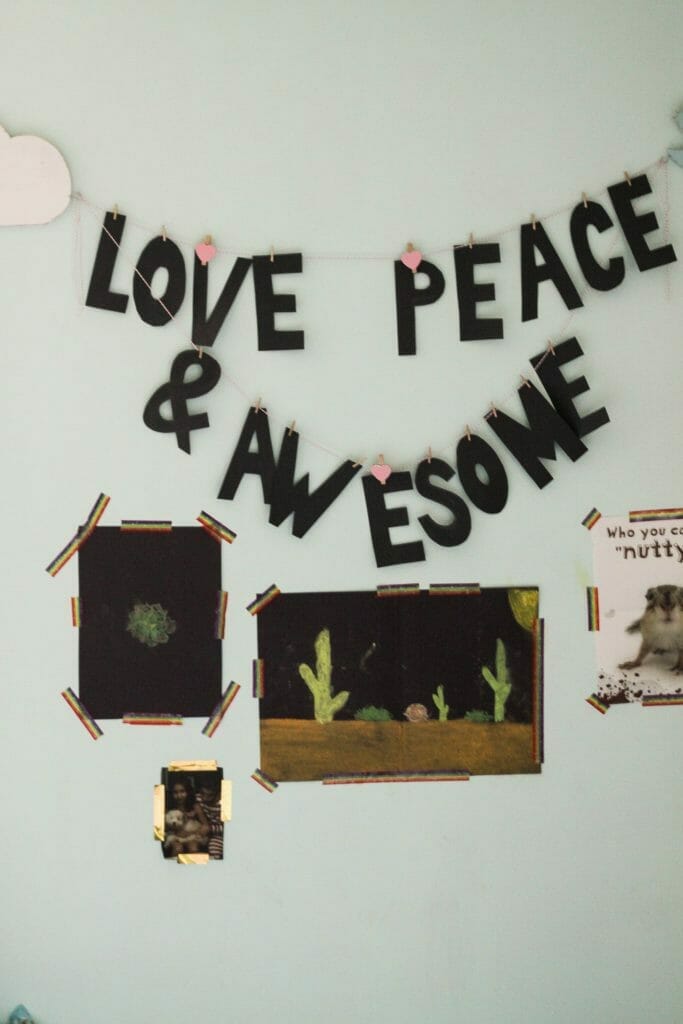 On the opposite side of her room, not much has changed with her gallery wall, but the collection of animals in her chair seems to multiply daily.  I am fairly certain that stuffed animals do, in fact, mate. 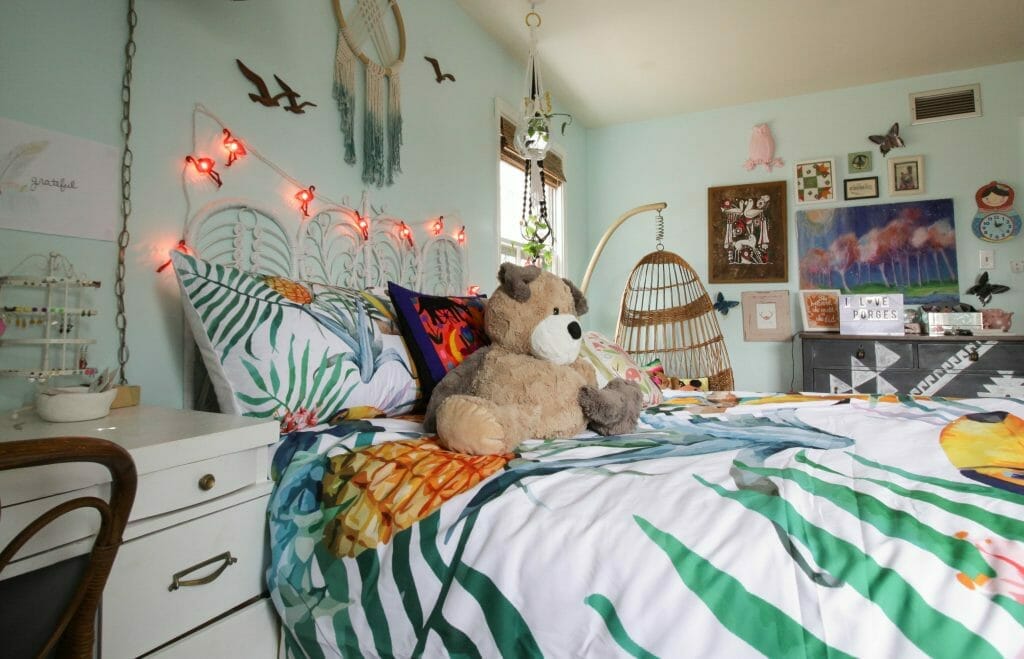 After Christmas, Emmy had an Amazon gift card, and I loved the thought she put into her purchases with it this time around.  She bought herself the most adorable owl onesie pajama set and a light box.  She chose this light box in particular because it came with emojis and symbols.  As you can see, our family loves Star Wars…. porges are the cute little guys in the latest film. 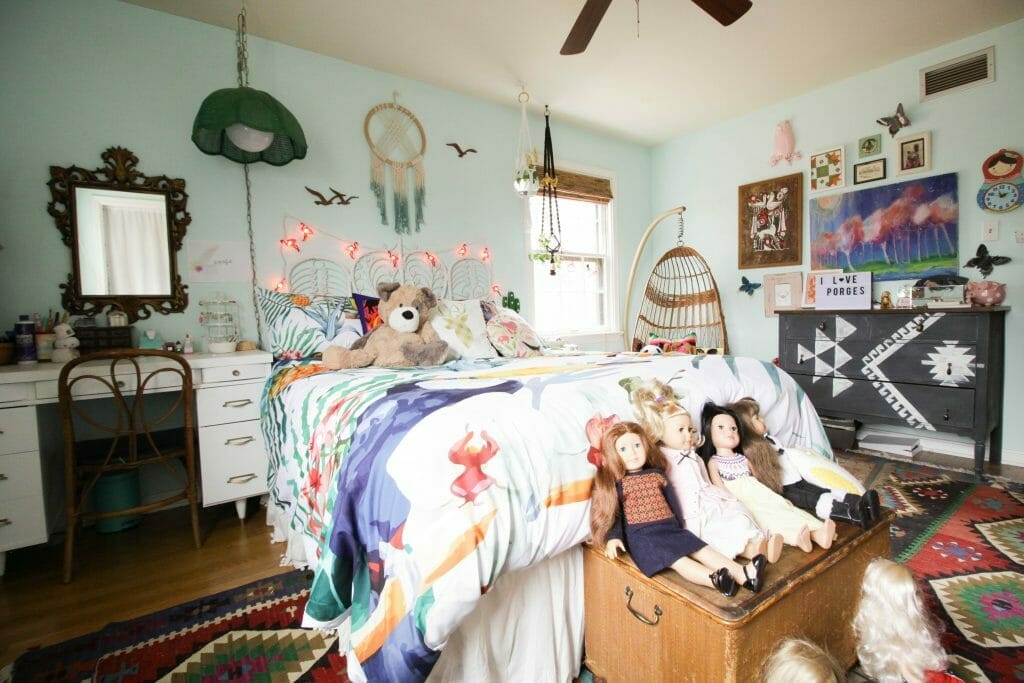 Although this room has much more stuff in it than it did a year ago, I am trying to really let her own her space and express her creative self.  While it can get out of hand, as in the photo I shared from her birthday, it’s who she is…. she’s a colorful, joyful, imaginative human being, and I don’t want that to ever stop.  If anything, I want to foster that individuality.  At the end of the day, it really is more important than any tidy room that Emmy has a space where she can be herself, design as she wishes, and create her own imaginary world.  We will still fight over it when it gets bad, but day by day, I am learning and growing with her.

If you’re interested in any of the new additions and existing pieces we from Amazon, you can click on their image below (had to share the owl pjs!).

If you have a child who tends to be more maximalist, how do you deal with it without losing your mind?  I’d love to hear!