Hooray for Friday!  Any big plans this weekend?  We’ve not got much on the agenda, and during these frigid and shorter days I’ve really enjoyed curling up under a blanket with a good book.  For a while you may recall, I was participating in a blogger book club.  Our lives all just got to be a bit too much to keep up with it this past Fall, so we decided to disband.  However, I’ll still be reading, just with no pressure to finish by a certain time. Since several of you have emailed me to let me know you enjoy learning about new books to read here, I’ve decided to share many of the books I read in a new “series” called Book Report.  (I say that very lightheartedly as there will be no agenda to it, and the posts will just come when they come!)

Over the last couple of weeks I’ve read two books that grabbed me completely.  I picked up The Winter People by Jennifer McMahon while out browsing Target with Emmy the other day. (I also picked up Everything She Forgot because Emmy said “This looks like a good one, Mommy!”  I just started it so I’ll keep you posted.) 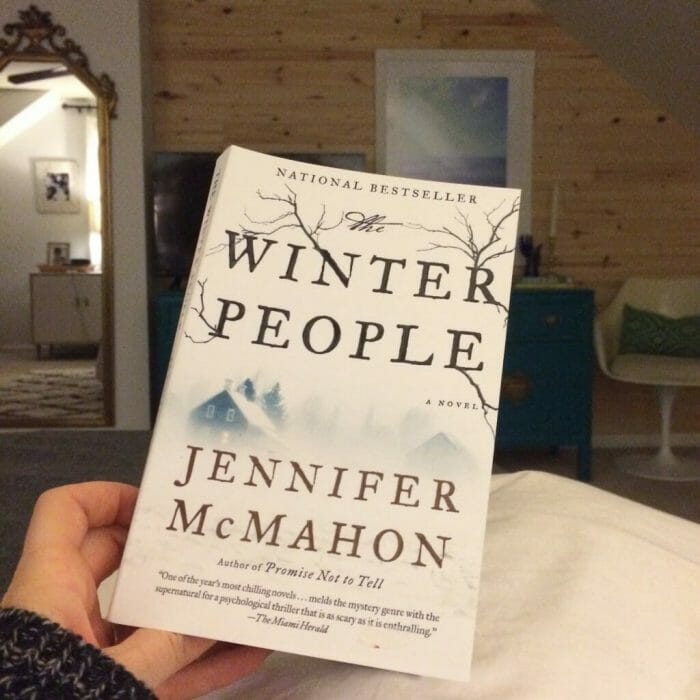 I began reading it that evening and was immediately sucked into this creepy mystery.  It takes place in 1908 as well as current times.  And if you’ve read any other reviews by me, you know I tend to like books that have intertwined stories separated by generations.  In 1908, Sara Harrison Shea is a woman with several secrets from her past that even her husband doesn’t know.  When her 8 year old daughter tragically dies, what happens next is horrific and devastating- Sara is found murdered in her own yard, with her husband as the suspect.

Fast forward to present times, when 18 year old Ruthie’s mother disappears from their home, which happens to be the former home of Sara Harrison Shea.  Ruthie and her young sister Fawn begin searching for their mother and in doing so discover several secrets hidden within the walls and floors of their house, and unlock a dark mystery.

I finished this book in just a 2 days  I began it Sunday night, read Monday night, then got up early to read on the treadmill while I walked Tuesday, and then finished it after I got home from work, but before the kids came home from school Tuesday afternoon.  Basically I squeezed in reading whenever I could because I didn’t want to put it down!  It is rather creepy and a little scary, so if you scare easily, it may not be the best book for you.  But if you look dark stories, and a bit of the magical and spiritual world, then it’s a must read!  And of course, I am always a sucker for a pretty cover, and that’s what originally drew me to The Winter People.

Last week I shared my word of the year, grace, and a bit about inspiration I drew from Jackie Hance’s book, I’ll See You Again.

I was not familiar with Jackie’s story, but my mom had given me a bunch of her old books and this was in the stack.  I picked it up and read the back, and decided to make it my first post-holiday read.  If you’ve heard about the Hance family, then you know it wasn’t exactly a lighthearted read.  Jackie’s entire world was shattered and her life forever changed when her three daughters ranging from ages 5-8 were killed in a tragic car accident, with her sister-in-law at the wheel.  Jackie’s story is tragic and gripping, and admittedly I kept reading it for the voyeurism- what is it about other people’s tragedies that pull us in?  But I also stayed interested in this book because Jackie’s writing felt so personal and raw, and I was completely on her side; the theme of hope underlying all of this loss was enough to keep me going.  I wanted to see Jackie through to the end of this book, and I wanted to know that her story didn’t end with her daughters’ lives, and I also wanted to know that their story was not buried with them.

If you’ve been a reader here for a long time, you may recall that in January of 2013, my neighbors suffered a great loss when their home burnt to the ground, and they lost two of their four children.  I didn’t know Chrissi or her kids well as her kids went to a local Montessori instead of the elementary school my kids attend.  Even so, their struggle and story hit home to me because of their proximity- it’s a tragedy that can befall anyone and it’s a mother’s worst nightmare.  As I read Jackie’s memoir, crying the entire way through, I could not help but think of Chrissi Lillard.  I admire both of these ladies, as they have both worked their butts off to create beautiful foundations in honor of their daughters and because of that, their girls will never be forgotten.  Jackie has the Hance Family Foundation, and Chrissi is working to create Sophie & Madigan’s Playground in Frederick, MD.

Although it was hard to read at times, I’ll See You Again made me want to love harder, hug tighter, and make my time more worthwhile.  It’s definitely worth reading.

And now it’s time for the weekend- time to build a fire, pour a glass of wine, and snuggle up with a good book!  Cheers!