Happy Friday!  I don’t know if it is because the kids were back in school after a week off due to winter storm Jonas, but this week just whizzed right by for me.  And it was a fantastic week…. nothing spectacular occurred, but it was just all of the little things that brought me joy…. I painted a dresser, took the dogs for walks now that the roads were clear and temps were warm enough (above 20!) early in the morning, played games with the kids, helped Emmy make her Valentines box, made a few successful dinners, baked Mardi Gras inspired cookies, ran outside with a friend, listened to a new to me podcast I loved (more about that at the end of this post), and finished an incredible book- Where’d You Go, Bernadette.  And I also wrote the longest sentence known to man, apparently. 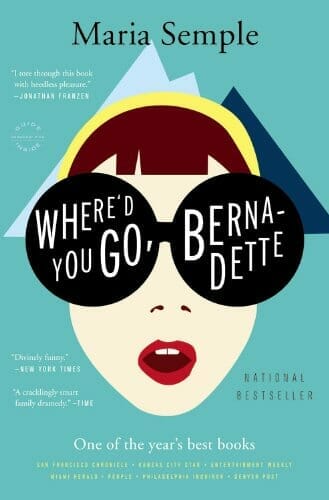 My mom reads so many great books and I am fortunate to have her pass many of them onto me.  This book is one that she handed me a while ago and raved about.  I was busy with the blogger book club, and just never had or made the time to read it before now.  But something about it called to me last weekend and I picked it up.  Once I did, I had a hard time putting it down!

This novel written by Maria Semple is different from many I’ve read with a format composed of letters, emails, texts, as well as a narrative from one of the main characters.  Semple’s unique approach kept my interest and passed the pages quickly for me.  The story itself follows the mystery surrounding Bernadette Fox, a brilliantly creative woman who feels stifled and has become agoraphobic, and has no friends in Seattle where she lives.  Her husband is a Microsoft genius, and clearly at the top of the ladder there.  Together they live in a dilapidated building where they are raising their teenage daughter, Bee, who is her entire world.

A family trip to Antarctica is in the works as a reward for Bee’s grades (the trip being the destination of Bee’s choosing).  Bernadette hires an inexpensive virtual assistant from India to take care of all of the tedious trip details since she abstains from social interaction whenever possible.  We read all of these emails leading up to the point where Bernadette disappears…. assumed dead by most.  But Bee is certain that her mother is alive and sets out to find her.

I loved everything about this book- the format, the satiric humor, the flawed characters, and of course the mystery. I’d like to share the passage that stuck out at me the most…. I went back and dog eared the page so I could reread it.

“Paul Jellinek was right,” Dad said. “He’s a great guy, a true friend. I’d like us to go down to L.A. and spend some time with him one day. He knew Bernadette best. He realized that she needed to create.”
“Or she’d become a menace to society,” I said.
“That’s where I really failed your mom,” he said. “She was an artist who had stopped creating. I should have done everything I could to get her back.”

As crazy as she may sound and may have seemed to others, Bernadette was a creative… and I completely related.  Maybe I am crazy, too. 😉

If you’re looking for a quick and interesting read, I highly recommend “Where’d You Go, Bernadette.”

Secondly, I want to mention one other point of entertainment… Do you guys listen to any podcasts?  I listened to the first season of Serial and started season 2 but it didn’t suck me in.  Well, the other day I was catching up on my friend Laura’s blog, and she mentioned a new to me podcast, Limetown.  I started listening Wednesday morning to see if I’d like it… And it pulled me right in!  It’s a fictional mystery following an investigative story around a town that seemingly disappeared over night.  I listened to the entire season Wednesday… I started in the morning and then hit the treadmill for speed day, which I knew was going to be about an hour long workout.  This show got me through that quickly, and then I just kept walking, logging more mileage just so I could keep listening.  It’s an incredible story, and very well done.  I can’t wait for season 2 to come out!!!

And speaking of Laura, I am off to meet her for coffee this morning.  Hope you have a fantastic weekend and catch all the awesome Super Bowl commercials!  Cheers!