Happy Monday!  Hope you all had a great weekend.  The cold returned to Maryland, which meant perfect reading weather… however, I’ve been sucked into Twin Peaks on Netflix so that’s my latest evening indulgence.  I did finish two books over the last few weeks though before I dove into that series.  Today I am sharing my book reports of The One I Left Behind by Jennifer McMahon and The Girls by Emma Cline.

I picked up The Girls earlier this month at the library after walking by it and recalling reading about it somewhere… I couldn’t recall what I read about it, but I took it off the shelf, read the synopsis and decided to give it a chance.  When I came home I texted my mother-in-law, an avid reader, to see if she’d read it.  She told me she had tried, but gave up.  Well, that didn’t give me much confidence, but I read on.

This novel was a national bestseller and loosely based on the story of Charles Manson.  I admit that I am always interested in the criminal mind and how it works, as well as how people allow themselves to be put into these situations.  One of my absolute all-time favorite shows is about a cult… The Following.  (Of course it also starred Kevin Bacon and I have a weird crush on him. Also, if you haven’t seen it, I believe it’s on Netflix now so check it out! It’s horrifically amazing.)

Anyhow, these stories typically draw me in.  The story is told by the now older middle aged Evie Boyd, who was an awkward teenage girl with not many friends, and parents on the cusp of divorce after her father’s blatant affair.  Feeling pretty lost, alone, and a little uncomfortable in her own skin, Evie sees a few girls who appear to be free spirited, lead by the magnetic and mysterious dark haired Suzanne.  Evie’s immediately intrigued by this young woman, and as luck would have it they run into each other a couple more times.  Suzanne and her friends, the girls, eventually bring Evie back to their camp, which is a broken down old home run and lead by the mysterious Russell.  At the time, Evie was intrigued and looking for some place to belong.  Fortunately for her, Evie is more of a fringe member of the cult, and when they commit a gruesome murderous act, she’s not present, though we do come to learn her role in that night later in the novel.  As an adult, she tells her story with a bit of regret and sorrow, but it’s clear that she struggles through life romantically, and doesn’t appear to be a strong woman.  The Girls tells the story of a young girl coming of age through the darkest of circumstances, and what it means to deal with such trauma as an adult.  While I found it to be an interesting read, I could only handle a little bit each evening and had a hard time relating to Evie.  In the end, I feel slightly indifferent about this book… I didn’t love it, but I didn’t hate it.  I kept reading because I just wanted to see Evie come out OK.

OK, now let’s head on to a book I devoured… it was SO good! The One I left Behind was written by Jennifer McMahon, whose books I have loved and shared before. (Read my review of The Winter People here and Night Sister here. I picked this one up at the library as well.  I like to just wander the aisles until something catches my eye, or google books I’ve loved to see things that are recommended if you like those.  I had googled, found something I wanted to look for, didn’t find it, but on a nearby shelf found The One I Left Behind and immediately remembered how much I loved McMahon’s writing style.  I jumped into this book right away, and finished it the very next day.  I was thankful for a cold day, the kids having friends over, and a cozy blanket and spot on my sofa to read. 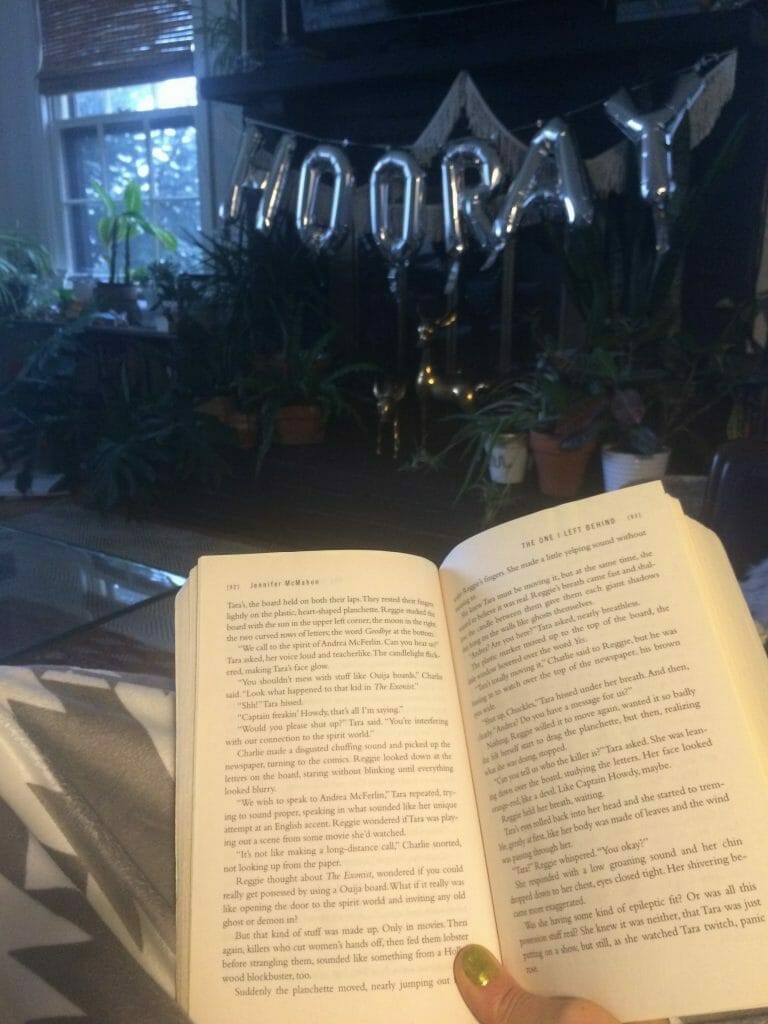 This book follows the story of Reggie as an awkward teen growing up with a dysfunctional family, drunk mother, and no father in 1985 in Massachusetts; and in the present time as Reggie has left home and become a prominent architect living in Vermont and struggling to commit in her relationship.  As the novel unfolds we meet Reggie’s childhood friends, learn about Reggie’s mother as a fierce but drunk mother who takes many lovers.  In 1985, a serial killer strikes their town, and is given the name Neptune.  Neptune chops off women’s hands, leaving them in a milk carton on the steps of the police station, and 4 days later their naked bodies turn up on display in town.  It’s clear that they’re not killed until the night they are left out, their wound has been treated well, and their last meal is a lobster dinner.  The last hand to be delivered to the station is that of Reggie’s mother.  However, her body never turns up.  Now, years later, her mother is found, alive and dying from cancer at a homeless shelter.  The years have damaged her mind, and it’s not clear how much, if anything, she remembers about her killer. Reggie returns home to help care for her mom, and Neprtune begins to strike again as the hand of one of Reggie’s childhood best friends turns up.  Reggie doesn’t trust the police to solve the case, and knows she has 4 days to find the killer.  If you love murderous mysteries, and dark novels (think Gillian Flynn), I highly recommend The One I Left Behind.

I’ve got two other books out from the Library now, and need to get started on one of those now.  What are you reading?