I picked up this little dresser the other day off craigslist. Actually, I had a friend visiting, but another pal called me and told me about this dresser that I would love. So I took her advice, looked it up, and immediately emailed about it! This is the before- I had already removed the knobs which were yellow. 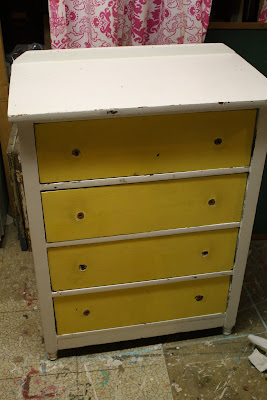 It was in decent shape, but the drawer stoppers were wearing away the bottoms of the drawers. The bottoms would have been nearly impossible to replace as someone glued in the bottom in all seams. Note to all furniture refinishers- you should NEVER glue in a drawer bottom. The dovetailed joints can be glued, but if a bottom is glued in it is nearly impossible to remove and replace, which it will inevitably one day need. Since replacing drawer bottoms was not an option, I removed all the metal drawer stops and replaced them with 1/2″ screws that I screwed almost all the way in, leaving just enough up to act as a stop and not scrape the bottoms of the drawers any more. Once that was done, I was able to get to work. I wanted to try out something whimsical and fun, so I decided to hand paint some funky flowers on it. I used DecoArt acrylic paint in Winter White. 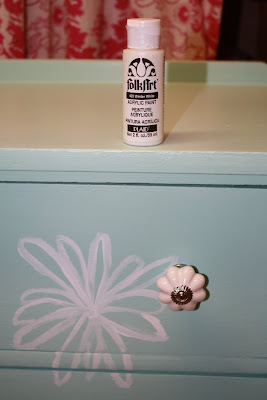 I also added knobs that I found at Marshall’s for $10 for a package of 6 (and very similar to the ones Anthropologie sells, but I couldn’t even buy 2 there for $10!). Here it is after my facelift…. It really makes me want to redo my daughter’s room in just white with pops of aqua- wouldn’t that be fun? 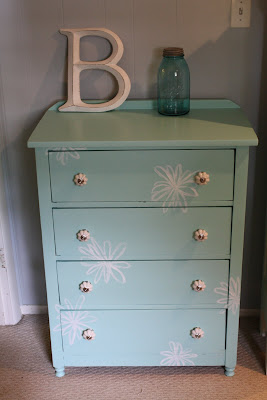 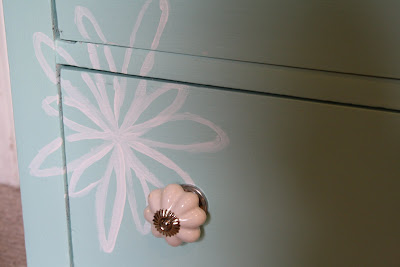