Happy Friday!  It’s going to be a cold and possibly snowy weekend here in Maryland, and weather like that is just asking for a fire in the fireplace, a cozy blanket, and a good book.  I’ve slacked a bit on sharing book reviews with you lately, but to be honest I haven’t had the time to read as much as I would like.  However, I am still reading, albeit at a slower pace, and have plenty of dark mystery novels to share with you today.  Books of that genre are always my favorite to read, and I actually love television shows of the same type. Lately, I’ve also read some other books I’ve loved that are completely on the opposite of the spectrum so I’ll be sharing those soon, too…. just in case creepy isn’t your thing.  If creepy is your thing, read on my friends! (This post contains affiliate links). 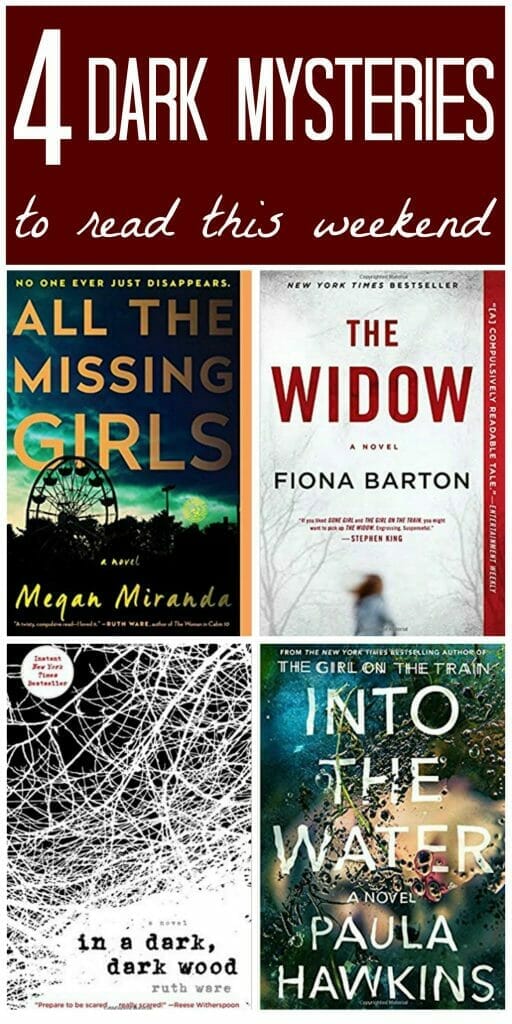 In a Dark, Dark Wood is a debut novel from Ruth Ware, who also penned The Woman in Cabin 10 which is on my to-read list.  The chapters are woven together, alternating a dark mystery that happened recently in the woods, with present day

thoughts from the narrator, Nora, as she comes to and tries to piece together what exactly happened in the woods….. who died?  And how did she end up in a hospital bed?  Nora tells the story of being invited on a hen weekend (bachelorette party) at a secluded but gorgeous modern house in the woods.  Clare, who is getting married, has invited Nora, after they haven’t spoken in 10 years.  Nora can’t quite piece together why she has even been invited, but upon chatting with another friend who was included, decides to go.  At the hen party that weekend, something goes wrong, and someone winds up dead…. but who?  And who is the guilty party?  We join Nora’s inner monologue as she puts together just what happens, and tries to eliminate herself as murderer, although she can’t be certain.   I enjoyed this book, but would give it about a B… I predicted the outcome a bit too easily.  It was, however, a good quick mystery read!

Into the Water is a novel by Paula Hawkins, of Girl on the Train fame.  (You can read my review of that here).

This book is on my favorite list for sure!  I devoured it in just two days, so it’s perfect for cold weather weekend reading.  A single mother is found dead, drowned in a river that flows through the small town where everyone knows everyone, and they’re all connected somehow.  She leaves behind a sullen teenage daughter, Lena. Earlier that year, a teenage girl, and best friend of Lena, met the same fate…. are they connected?  Is there a mystery surrounding the water?  Jules, Lena’s aunt, must return to the town she left behind, the home she grew up in, and the sister she hadn’t spoken to in years to face her past, and become a parental figure to Lena.  This story weaves together several narratives, revealing relationships and history, and other mysteries of the quiet town.  Who killed Lena’s mother?  Was it suicide?  Lena doesn’t believe so, and she and Jules set off on separate paths to piece together the mystery.  Get your page-turnin’ fingers ready for this one!

All the Missing Girls by Megan Miranda is another one that I really enjoyed reading.  The story format is different from anything else I’ve read, telling the story a bit backwards chronologically, but as you get into it, it starts to make sense. (To be honest, it confused me a bit at first). Nic returns to her home town to help her brother prep their ailing father’s house for the market.  She left the small town of Cooley Ridge 10 years ago, after her best friend Corinne went missing, the unresolved investigation focusing much on her father, brother Daniel, then boyfriend Tyler, and Corinne’s boyfriend Jackson.  A decade later, she’s engaged to be married, but leaves her lawyer fiance behind to spend the time at the house.  Just days after Nic’s return to town, another young woman disappears, a woman who happens to have served as the alibi all those years before.  This story follows Nic as she finally puts together the mystery of what happened to Corinne, and now must find out if Annaleise, the young woman currently missing, has met the same fate. This book has a surprise ending worth reading on for! How well do we really know our friends, and even our family?  This book will show you that everyone has secrets they keep, even from those closest to them, and even from ourselves.

The Widow by Fiona Barton was a truly interesting and different kind of mystery to me.  Jean has recently been left a widow, after her husband falls in front of a bus and is killed instantly.  They had lived a life together, she by his side, playing the role of suspect’s wife.  You see, he had been accused of abducting a little girl, taking her from her own yard, and then no one knew what happened to her. Now her husband has died, and all eyes are on the widow, perhaps she knows the true story of what happened to that little girl, and maybe now that he’s gone, maybe she’ll tell, if she even knows.  I found this book highly intriguing though at times very frustrating… I couldn’t quite connect with Jean, as she just seemed like a weak human being to me.  That being said though, I was into the story and I wanted to know what happened, so I kept reading, and the truth is finally unveiled. We learn what was going through Jean’s mind as her husband was accused.  This novel made me think a bit about what I would do if the person I loved most in the world was suspected of such a heinous crime…. fortunately, I truly cannot imagine!  If you’re looking for a different kind of mystery, I do think this one was worth it!  Fiona Barton followed this one up with The Child, which sounds utterly amazing and has been added to my list.

That’s all I have for you today, but hopefully that’s enough to get you through until I share some new reviews with you.  I’m finally getting myself back in the swing of reading a bit more, but the last book I read needed time for reflection and processing, so I have yet to open another.  This post is motivating me to get to the library. 🙂  Happy reading to you, my friends!