It’s been a long time since I’ve shared a furniture makeover around here!  With Sweet Clover in its busy season, as soon as I finish a piece lately I haul it right over to the shop and never give it a proper shoot. So this piece received its shoot on the sales floor.

Sometimes I pick up pieces of furniture I am not immediately in love with, but that have potential and, let’s face it, fit into my very thrifty budget.  That was the case with this eventual distressed midcentury dresser.  I found it on craigslist for a great deal and knew I could give it new life.  I loved the wood finish and planned to keep it as is at least on the drawers, but change it’s ugly non-original hardware (and I apologize because I don’t have a before picture).  When I arrived to pick it up, I found out how ridiculously heavy it was, and it seemed the drawers weren’t working properly.  I thought they were just not in the right spot and tried every configuration…. it seemed they wouldn’t work.  The sellers were moving that day and I felt badly and just bought it anyhow because I am a big fat sucker.

I brought it home, removed the hardware only to find the unoriginal hardware was hiding holes from the original hardware, so each of the larger drawers  had 4 holes, which meant filling holes, and no keeping those drawers wood.

I remembered seeing this dresser my friend Chelsea painted recently, and drooling over it- and it was white, distressed, midcentury.  I decided to give that look a go with this one.

I sanded the dresser all over, filled holes, and gave it a few coats of primer.  Here it is with one coat pf primer, so you have an idea of what I was working with. 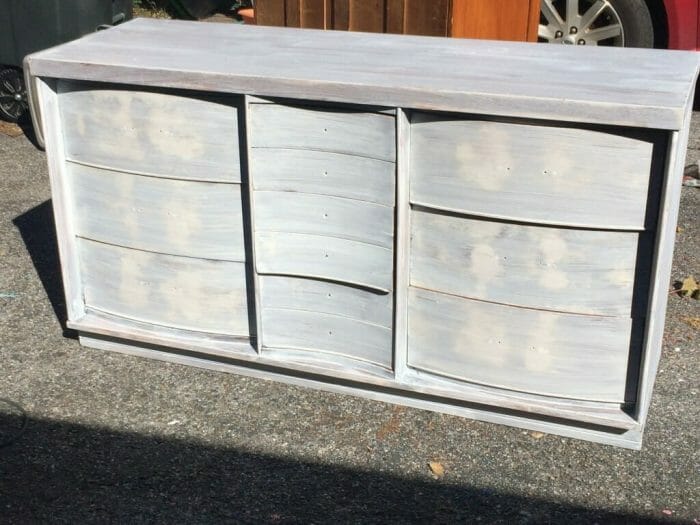 After priming it, I applied two coats of General Finishes Antique White Milk Paint.  It was very rainy that day, and I painted in my garage and it didn’t seem like the paint was sticking.  I felt like I could just scratch it off.  I was ready to haul it out into the rain and run over it a kajillion times at this point… I was so frustrated and nothing was going as I had planned with this piece.  I decided to walk away for the day, before I got too frustrated.

The next day I went back to the garage and found that the paint was perfectly fine and was not coming off.  I think the humidity was playing games with me!  I started to distress it by hand, but to be quite frank, I was feeling lazy and this dresser had already been the bane of my existence… I just wanted to be DONE. So I took my orbital sander to it, and went to town distressing the edges.  Once I had a look I was pleased with, I applied General Finishes satin wax with a rag and then  gave it a good buffing.  I will say- this dresser feels as smooth as a baby’s bottom!

Finally, the crowning touch, I used some silver branch pulls I had in my stash and paired them with some silvered faceted knobs I found at Hobby Lobby.  I added the new hardware, and when I put the drawers back in, I realized what way they were supposed to go finally, and now they all slide in and out with no issues!

So it’s functional now, and pretty!  I really love its final look. 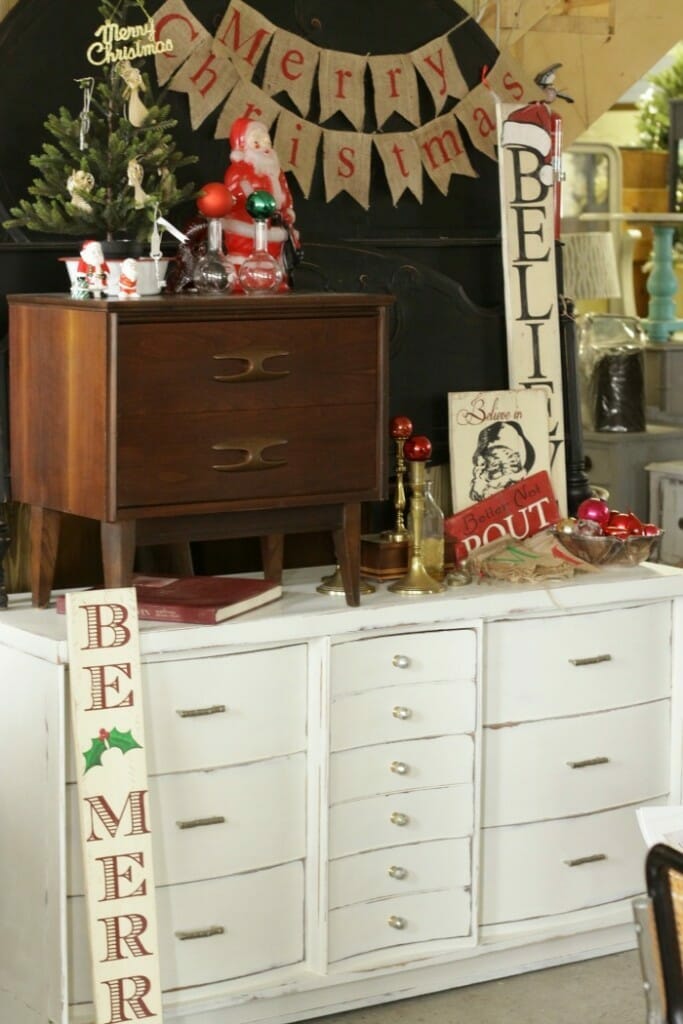 The knobs are stunning! 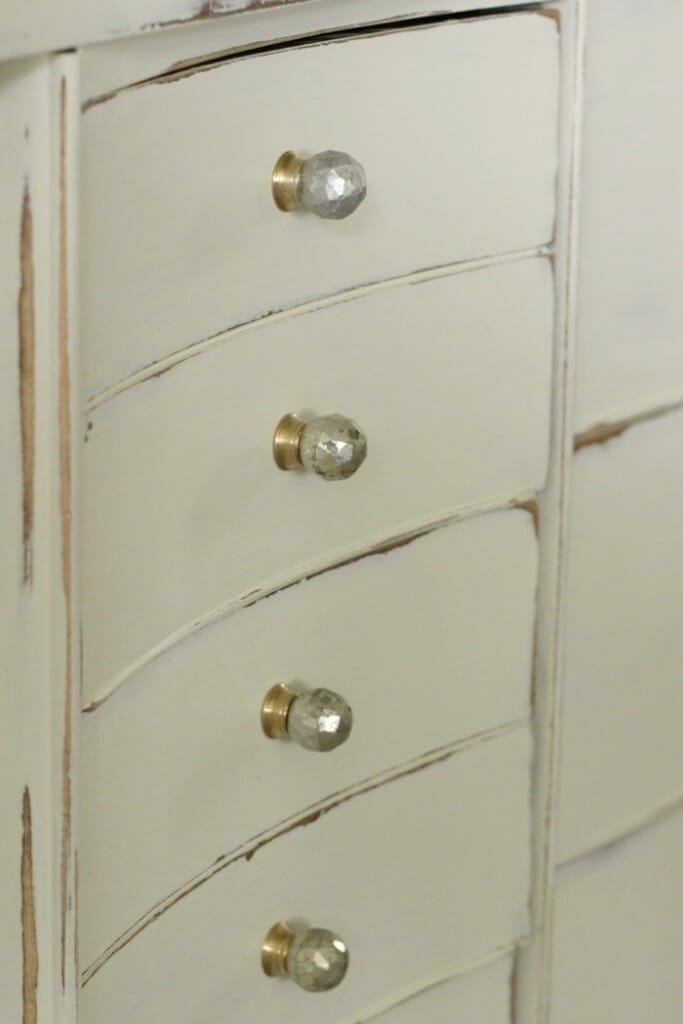 And of course the branch pulls add a lovely rustic modern touch. 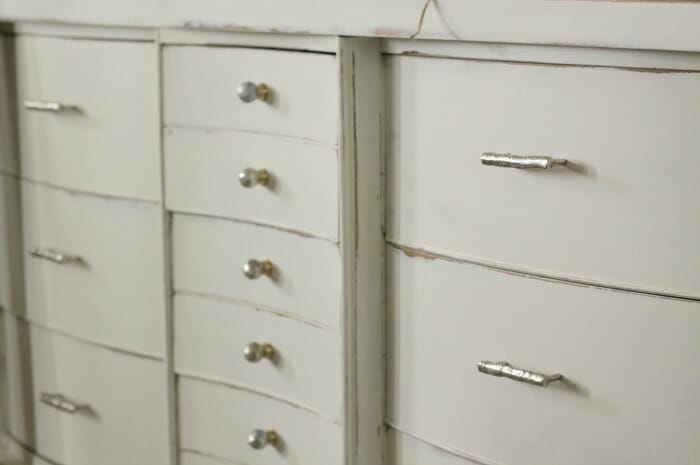 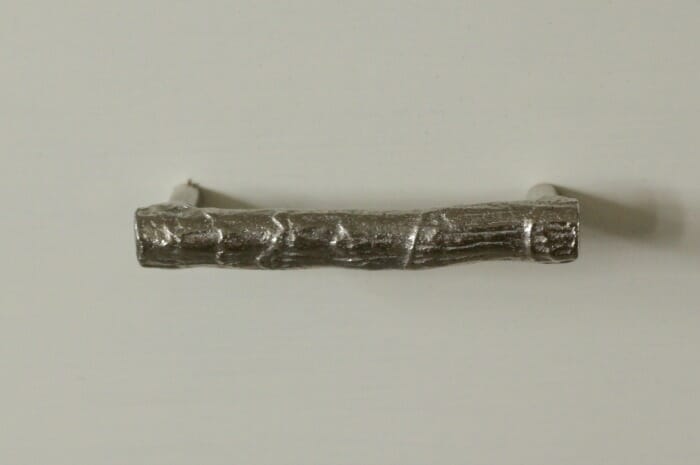 And now I don’t want to run it over anymore…. I actually love it enough to want to keep it, but you can’t keep them all, can you?  It didn’t go to a new home this past weekend, but maybe at our next sale November 20-22 it will find someone to love it like I do!  But it might take time, too.  Because sometimes, you really have to grow to love something, right?

Have you ever had a piece you wanted to toss in the burn pile?  I want to hear your stories!