Long time no talk, you guys!  I apologize for the blog silence, but if you follow me on instagram you know that life has been a little crazy over here.  We said goodbye to Jake, and I’ve been intending to write about it, but I haven’t been able to bring myself to do it.  We’ve also purchased a garden stone kit to make his grave marker, but I haven’t done that with the family either.  I’ve been sort of stuck in a paralysis, unable to take those steps that make it all very final.  As you might know, Jake was my best bud, so I am taking it much harder than I even thought I would and the blog has just fallen to the wayside temporarily.  All of that in addition to the kids being out of school and my desire to just make this a great summer has resulted in my disappearance here.  Today though I am back with a super cheesy craft for you, a DIY bohemian American flag hanging, just in time for the 4th of July.  After Jake passed, I found that keeping my hands busy was the best way for me to deal wth my feelings.  I worked in the garden, cleaned out under trees, trimmed all the shrubbery, and walked Catcher & Snowball to myself going.  When the weekend arrived, the boys headed out for some errands, and Emmy and I decided to heal our hearts with some craft time, working with things we already had at the house.  We headed out to the porch for fresh air, and brought our supplies with us.  She created an adorable doll canopy for her American Girls, and I created this boho American Flag. 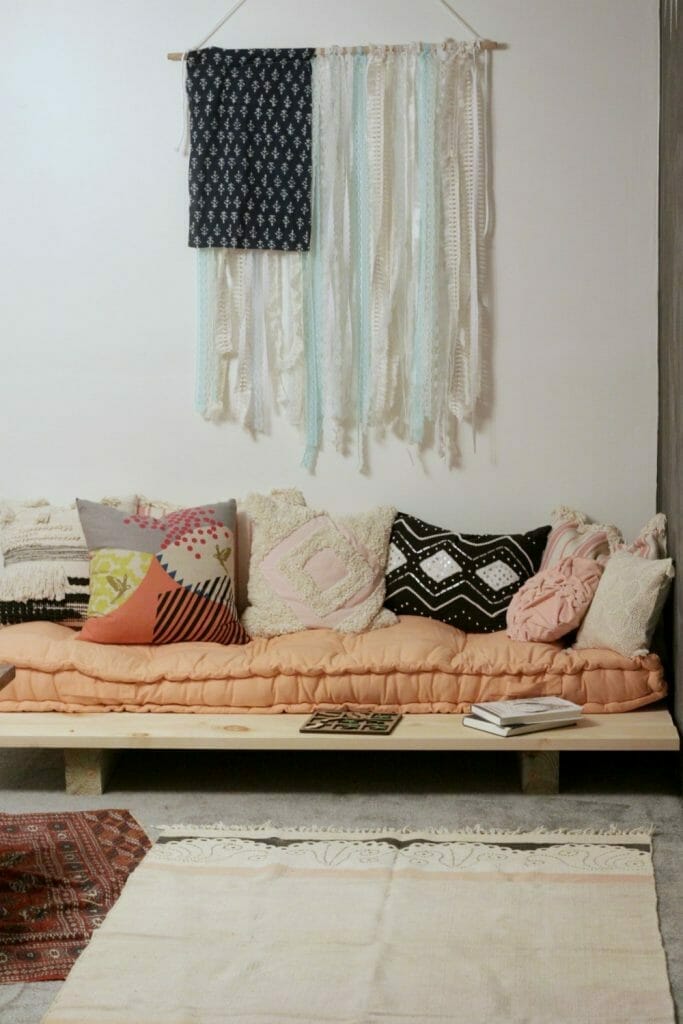 When I set out to make this flag, I honestly had no idea where I would hang it, but I just needed to make something.  As it turned out, it worked out perfectly in the playroom nook pictured above!  I’ll talk a little more about this nook at the end of the post; for now, let me share with you how I made this flag.

I used a 36″ dowel, and just began cutting a few strands of lace double the length I wanted it to fall so that I could simply tie onto the dowel.  As you can see, I had “collected” loads of vintage trims from yard sales over the years.  I love using it in different places, such as the fringe trim on my fireplace, so it’s one of those things I just always buy if the price is right. 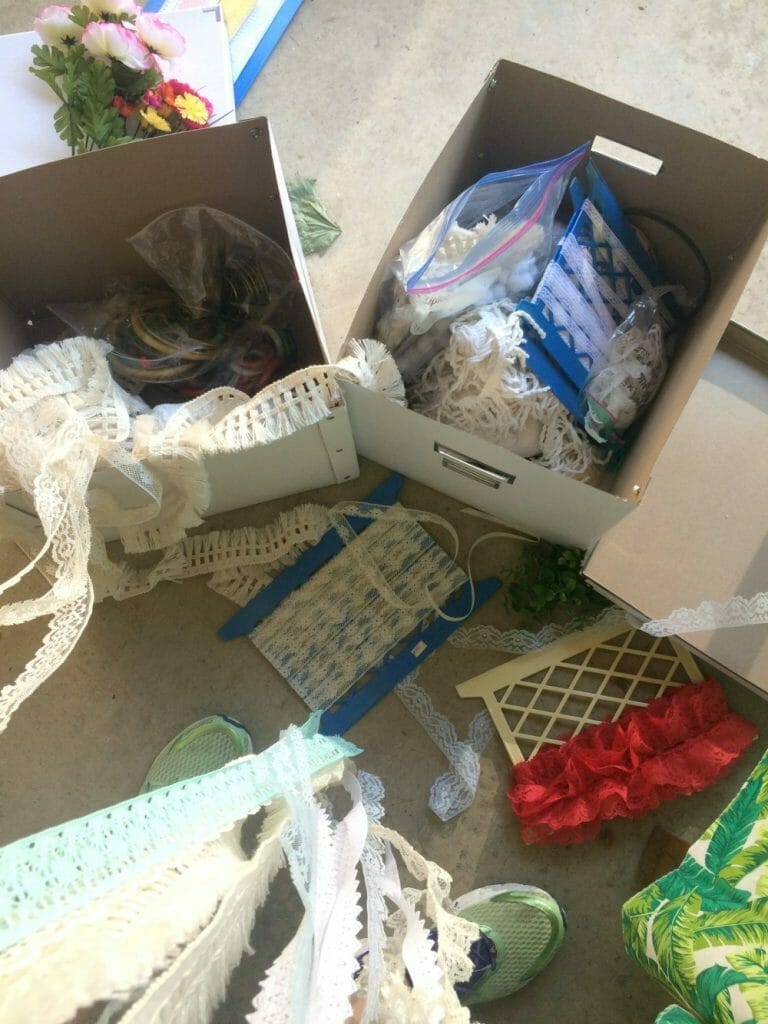 I began at one end and tied on a few strands of white, followed by an aqua or pale blue and repeated the pattern.  I am not one for the color red, so I made a Cassie-esque flag in shades of blue 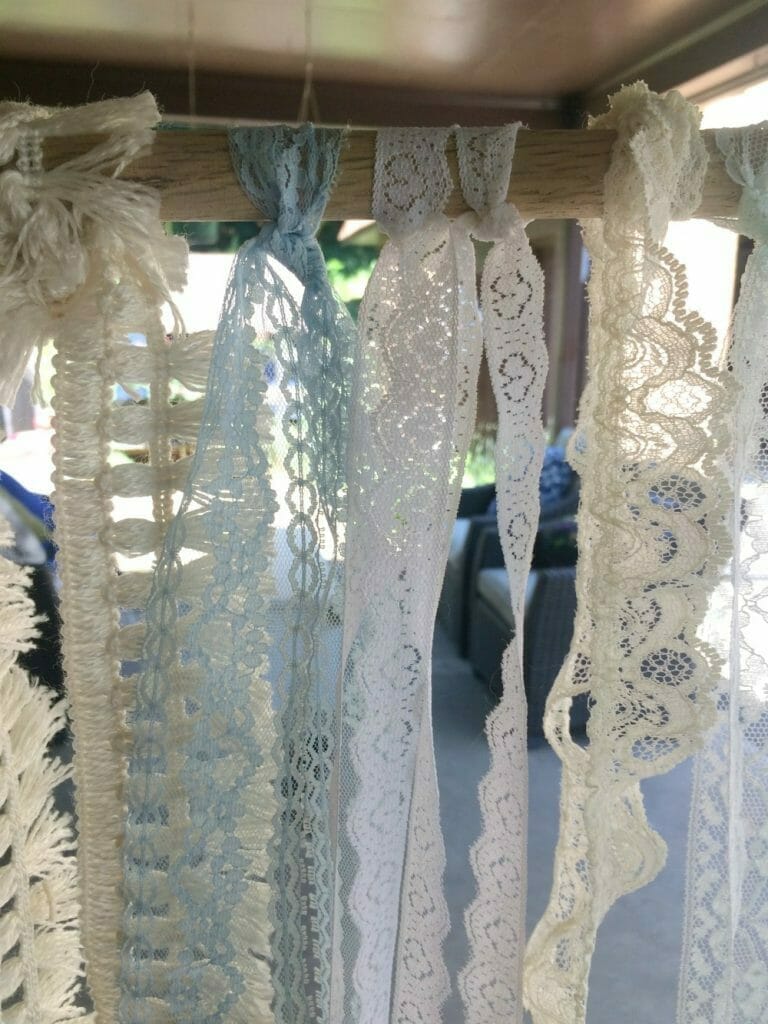 I continued along until my dowel was as full as I wanted it to be. 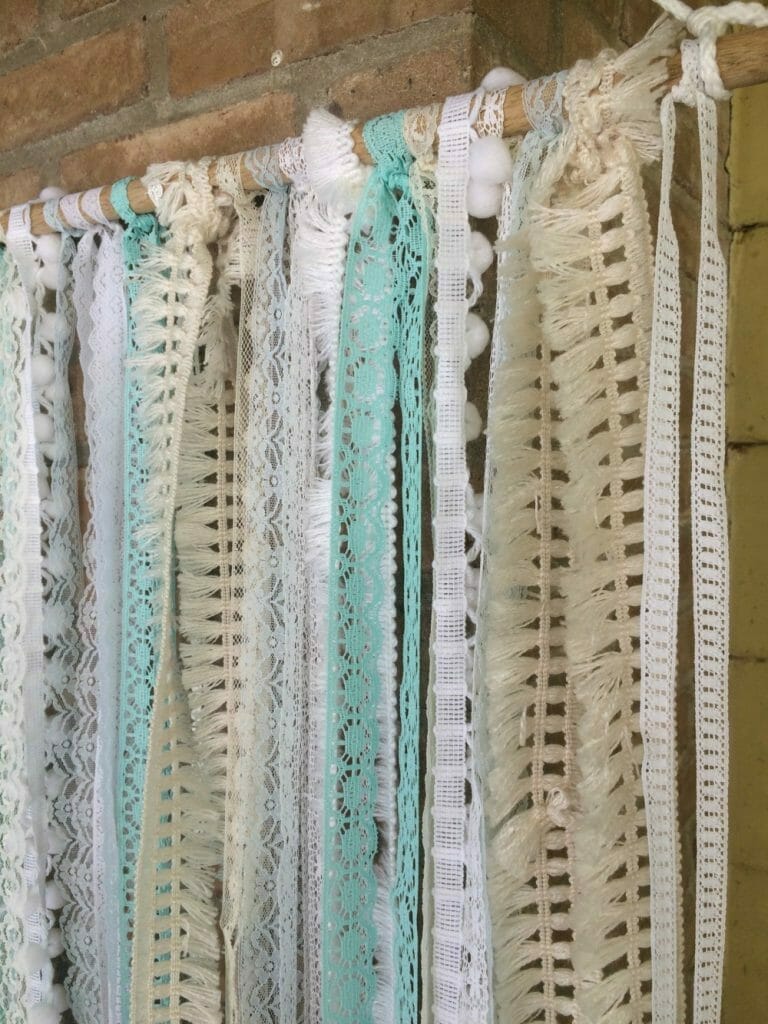 I used a strand about 50″ in length of white macrame cord (simply because that’s what I had, but it also worked well!) to create a hanger by simply tying it on to each end of the dowel. 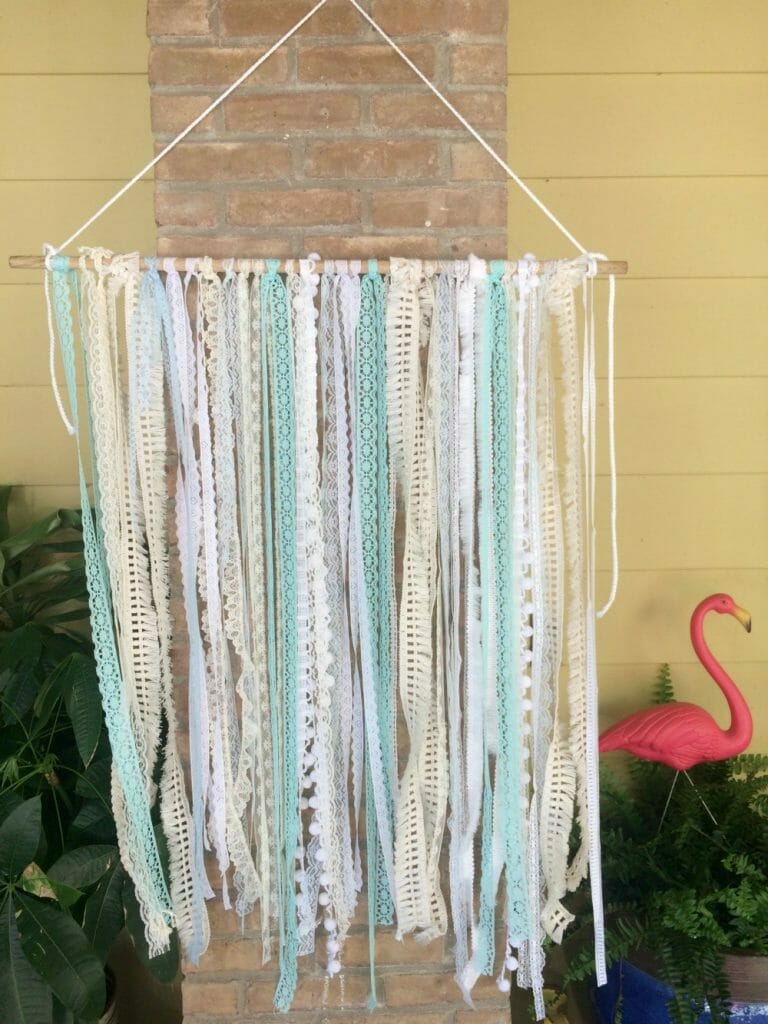 Next, I got out my fabric and decided how I wanted it to fall.  My original plan is what you already saw above, but I started to play with it and really liked how it looked as a triangle as well. 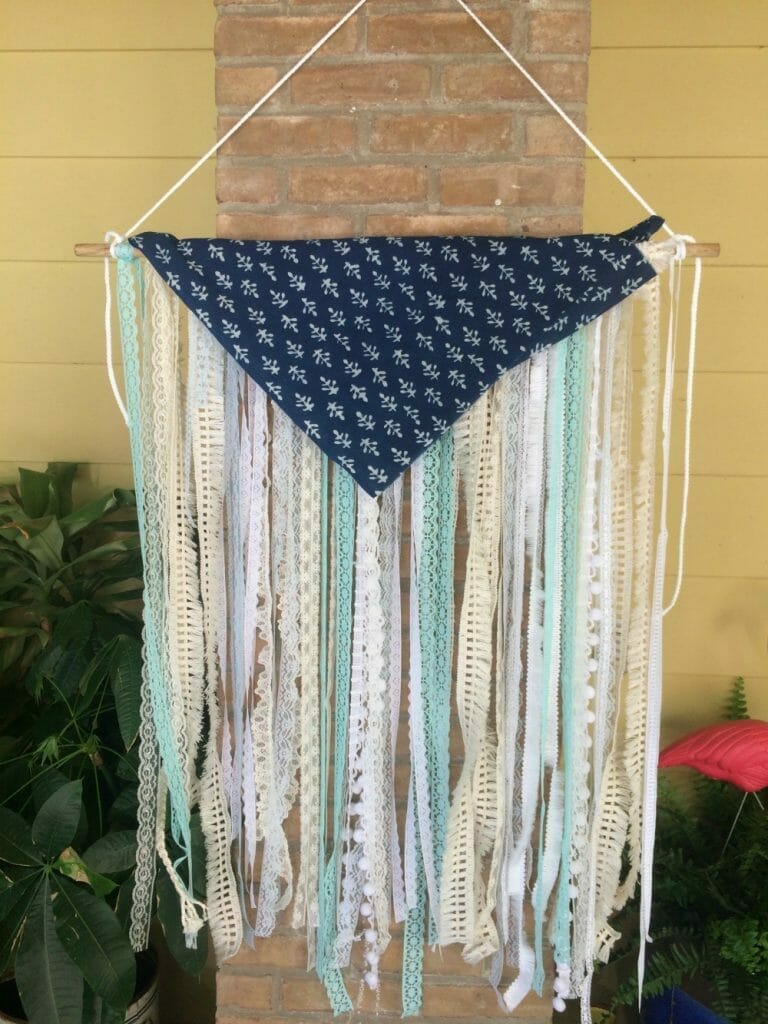 While I loved that look, I felt that the traditional placement had more of a “Murica” vibe to it. 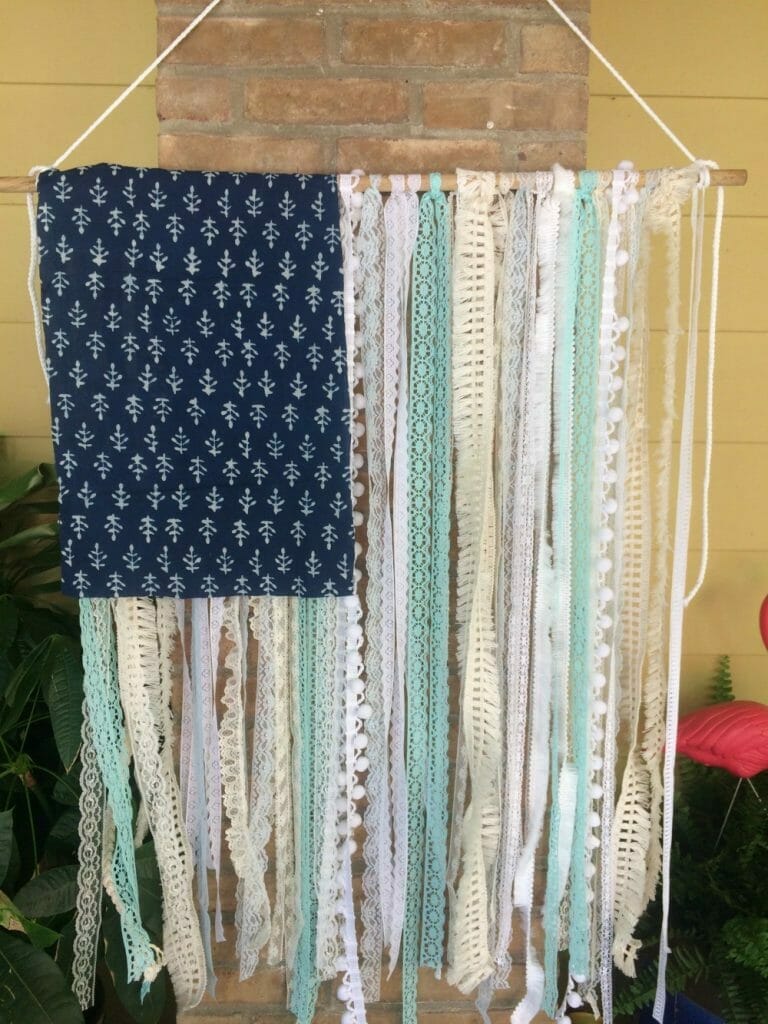 Now, I don’t have any photos of the next steps…. while it was not challenging, it was tricky maneuvering and extra hands were not to be found for photos!  I cut the fabric to the size I wanted that seemed to suit my flag… just eyeballing it… and cut it a few inches longer so that I had room to drape it over and sew it in place.  I left the edges rough to fit the feel I wanted. I draped the fabric over the dowel, using pins to secure it in place.  Next, I used my sewing machine to sew a line that I intended to be straight, but when it hit the knots of the fringe trim, it pushed aside a bit and my line is not straight.  But honestly, whatever!  It’s just for our family to enjoy and it’s boho… so there.  I want to add that I needed Chris to hold the dowel in place behind me and level so that I could get the line sewn with my machine.  The weight of the dowel kept pulling so eventually he was recruited to be my dowel holder.  As you can see, my line is crooked as mentioned… 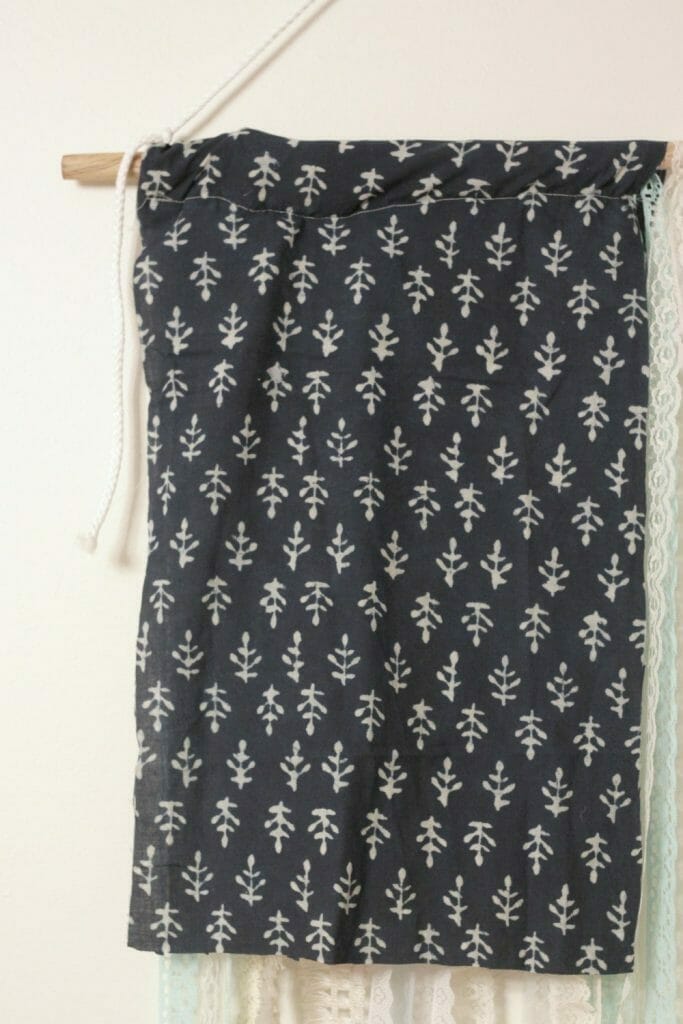 Even with its crooked line, I love how it looks in our playroom turned tween lounge nook. 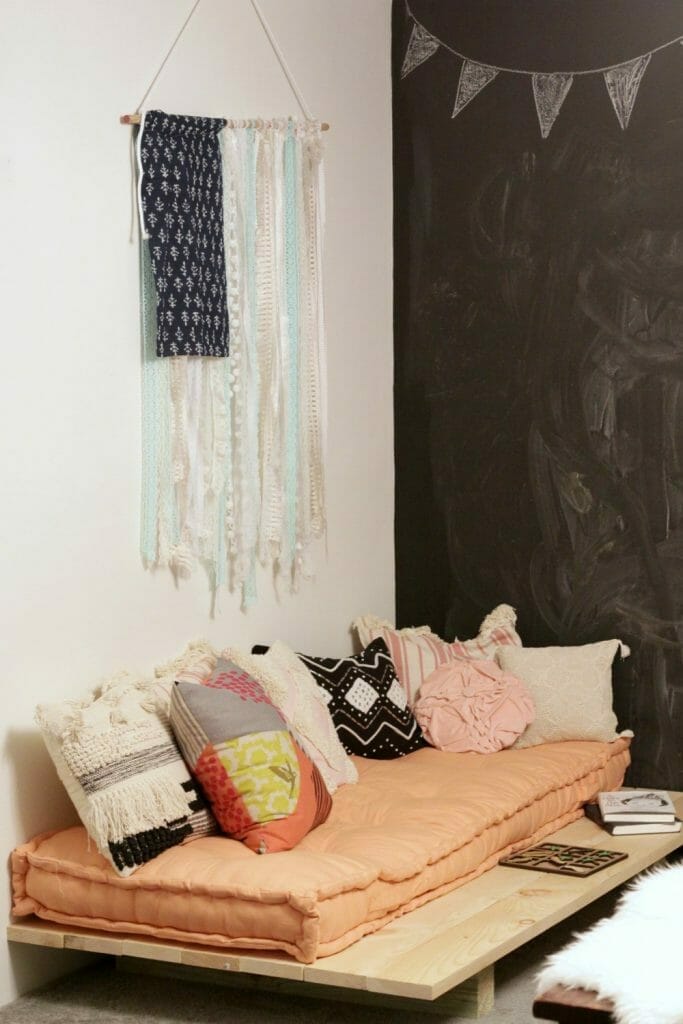 And of course, if you haven’t been on instagram, you’re thinking… what tween lounge?  Well, I’ve been working to redesign the playroom in to more of a tween/teen lounge as my kids have grown and their needs have change.  I commissioned Chris to build me this planked daybed after seeing it on Emy’s site and loving it.  He was supposed to build it according to the measurements I gave him to suit the cushion I ordered from Urban Outiftters.  (Emmy selected the peach color which I love!)  Unfortunately (or fortunately, as it worked out!) he used the measurements from Emy’s plans, and I was worried it would be too short.  It was also way too wide.  However, when we set it up, the length ended up a perfect match (UO’s site measurements were off, I guess!), and we decided we loved having the extra width for the kids to set books, drinks, games, what have you.  It’s like a built in side table… so while I was PO’ed and there was some yelling of “Why did you ask me for measurements if you didn’t even use them!!!!” I now think my husband was onto something.  All’s well that ends well! 😉 We still love each other, too, so win-win all around.

Aaaaaanyhow, I planned to use pillows I had on hand to set this up, but then was so fortunate to have a couple fabulous companies reach out to me and their pillows couldn’t have complemented this space any better.  Jane, who owns Janery, is an amazing seamstress and even made Snowball’s dog bed.  She creates beautiful pillows as well as an amazing array of cat and dog beds.  Jane sent me the Mountain Pinks pillow and I love the vibrancy and color it adds.  Not pictured is the garden teal she also sent me which is on one of our bamboo chairs in this space… I will share it in time! 😉 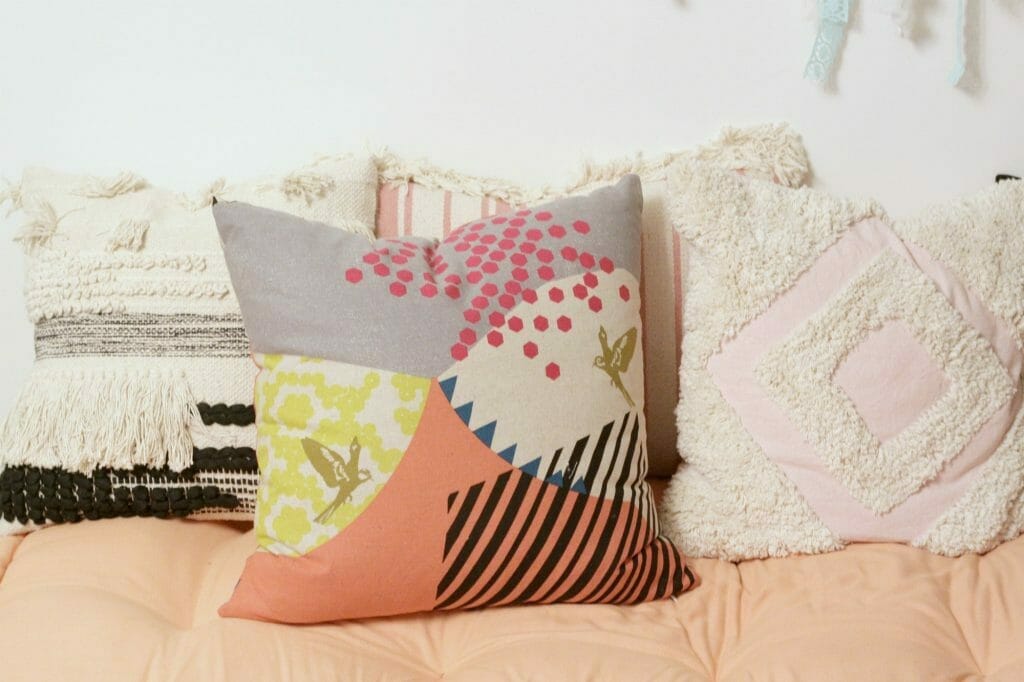 The other pillows you see mixed in come from AntiqueTex and they add the perfect amount of texture and boho vibes to this nook. (Minus the pink and white striped pillows I made from Ikea throw rugs).  The blush, velvet, fringe, and sequins all just take it to the next level! 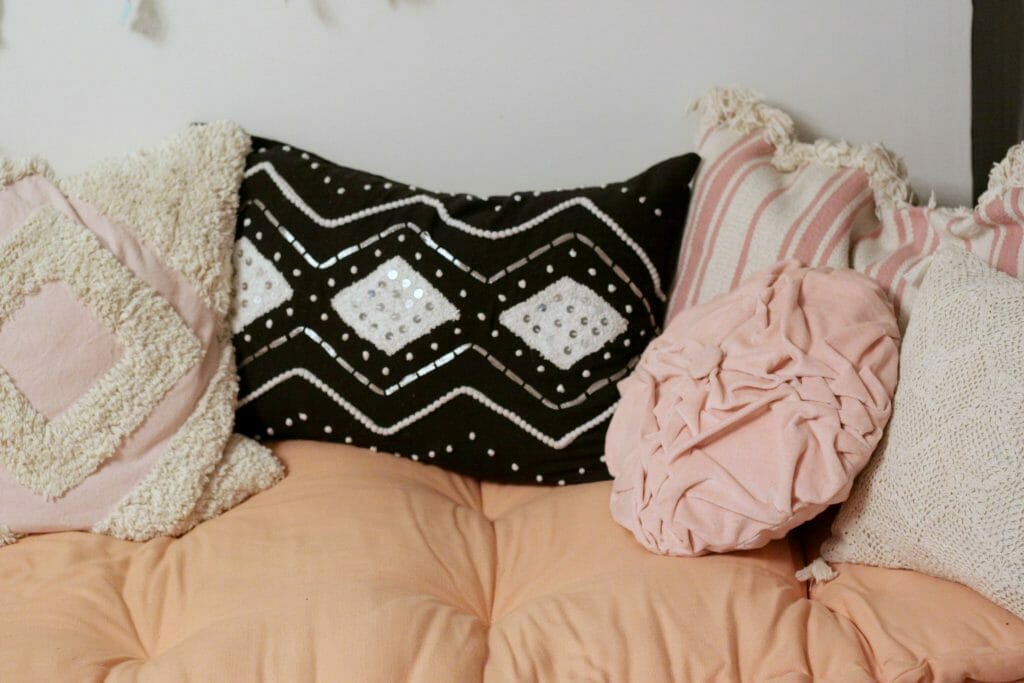 As summer goes on, I hope to continue working on this space so that my kids can use and enjoy it, and when they do go back to school in the fall, they have a comfortable and creative place they can retreat to.

Hope your week is off to a smashing start!  Thanks for letting me share with you today… I hope to share more about Jake soon, but I do know that spending time with the people I love, and making things with my own two hands is a sure fire way to bring some happiness to my heart.  This photo was taken the same day that Emmy and I made this hanging and her doll canopy… pardon my no makeup look, but I think what you get out of it is true happiness.  I finally felt a bit like myself again here, sitting in the hammock with my girl. 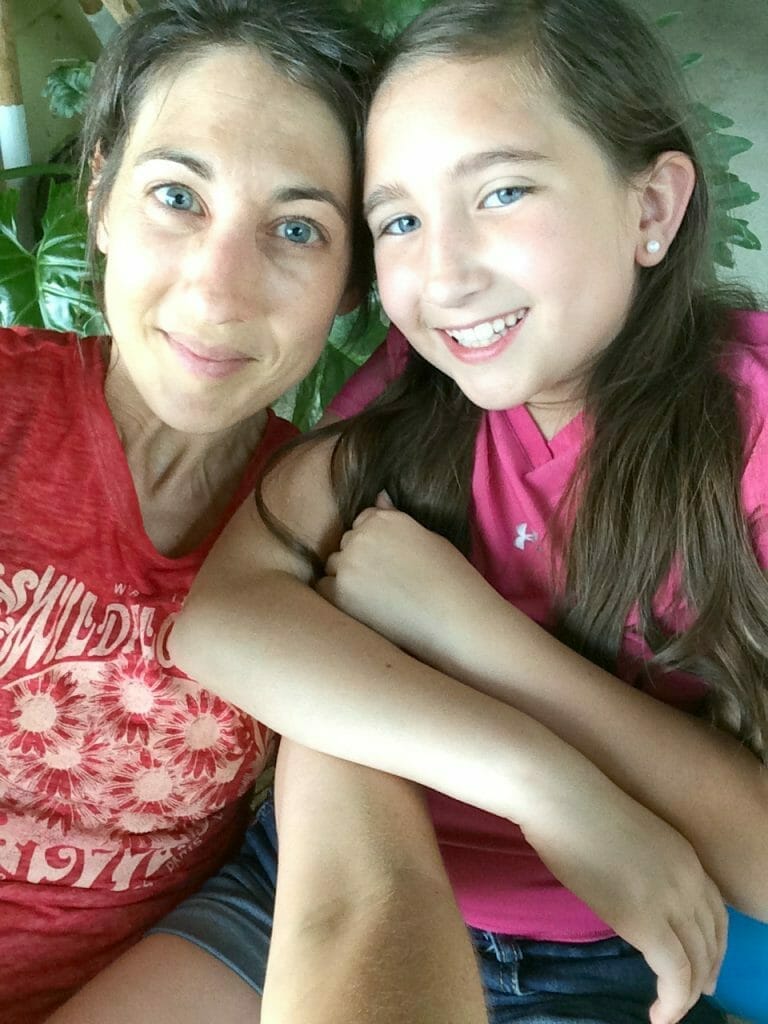 When you are going through a hard time, what do you like to do to get through it?  I would love to hear! 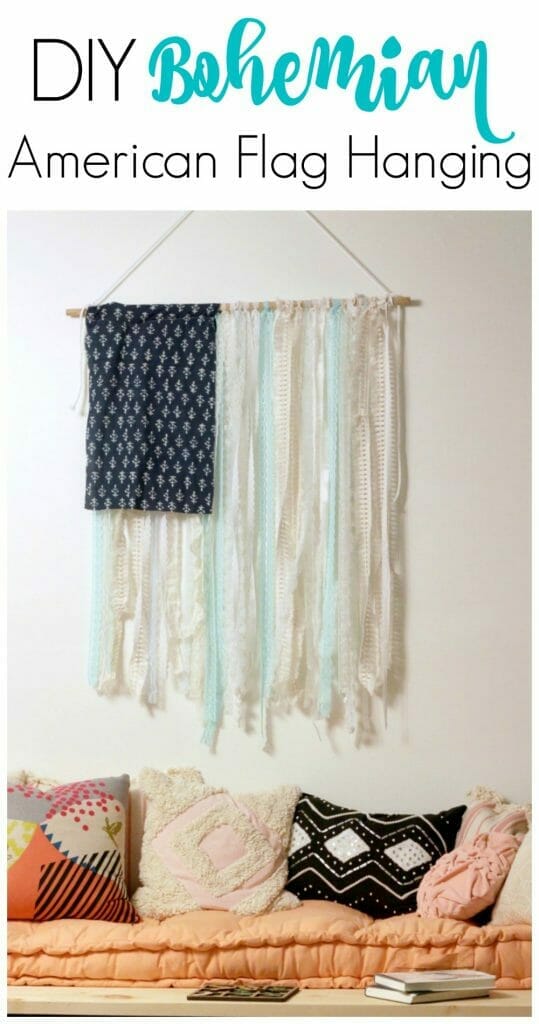