I am so excited about the project I am going to share with you today, a DIY boho pouf slipcover.  One of the plus sides (perhaps the only one!) of a super tight budget is that a lack of money causes me to think so much more creatively and make things happen by working with what I have sprinkled with a bit of elbow grease.  You might remember from my nursery plan that I intended to include a denim pouf to go with my big comfy leather chair.  My dream pouf was about $300, so we knew that wasn’t going to happen, but I found a fantastic bargain version I contemplated. (You can see them both in my original plan).  The “bargain” pouf was still $100, and I just could not pull the trigger on it.  As I was working on furniture in my garage one day, I walked by an old hassock I used to have in my living room.  It was a tan pleather that would not work with the brown leather chair, and the seams at the top were splitting a bit.  However, it was in my garage so free to me!  In the basement in my stash of fabric I had a few yards of dark denim I scored at a yard sale last summer, as well as some fringe I found at another yard sale a couple of years ago… all of those finds that I already had resulted in my wheels spinning and the idea to sew my own slipcover for the existing ottoman. 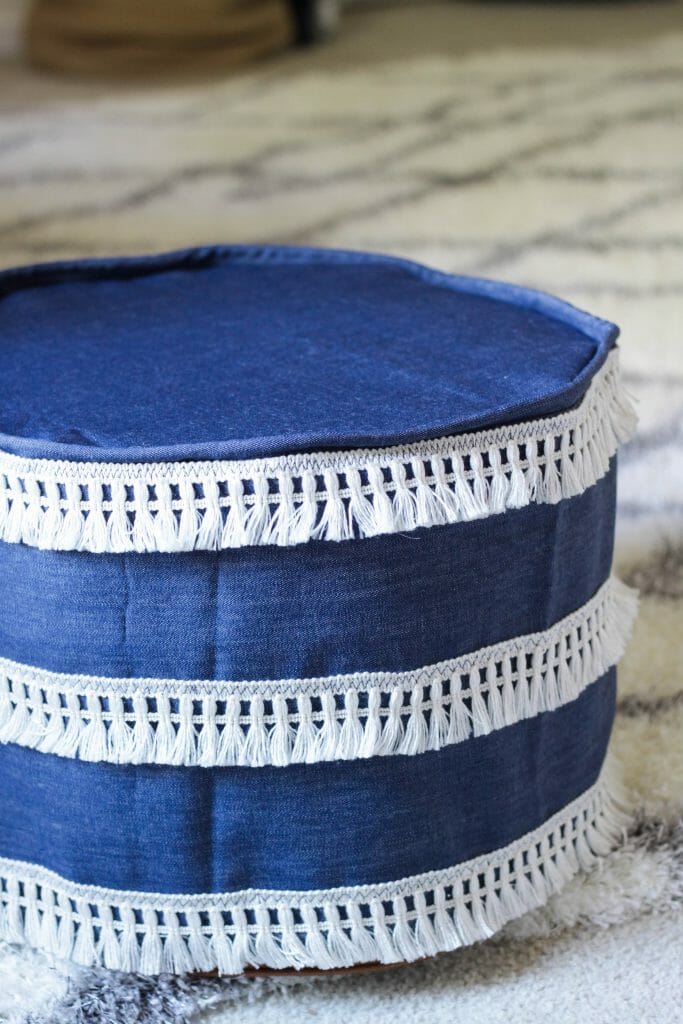 As I mentioned earlier, this piece started out life as a tan ottoman with seams coming apart.

I began by gathering my materials.  I used the following:

I used the cord to wrap around the top of my pouf to get the length needed for the piping.  I cut a few inches extra to give myself room to sew it into seams and for error. 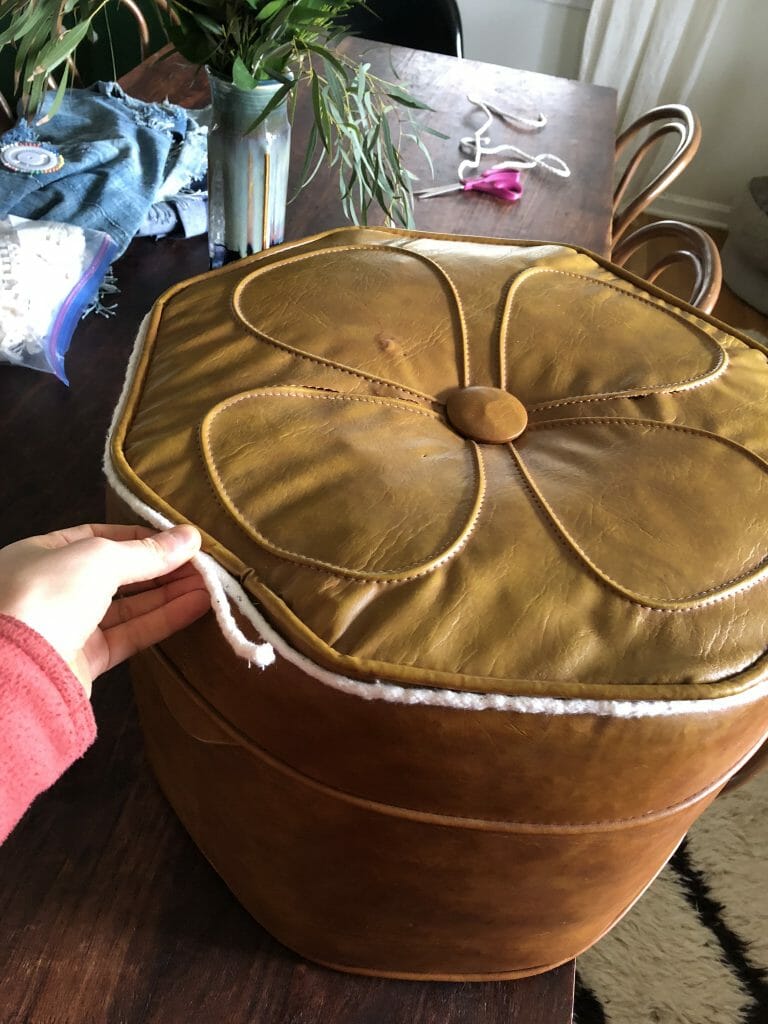 Next I cut the length of fabric for the piping by running the cord along the edge of the fabric and leaving it so that it had about 2.5″ on each side.  You can see below where I began cutting the strip of fabric.  You can also see that I tend to wear Uggs every single day of winter and that I got new dining chairs that desperately need new seat fabric.  I had thought of using this denim for those, but this pouf got it instead! 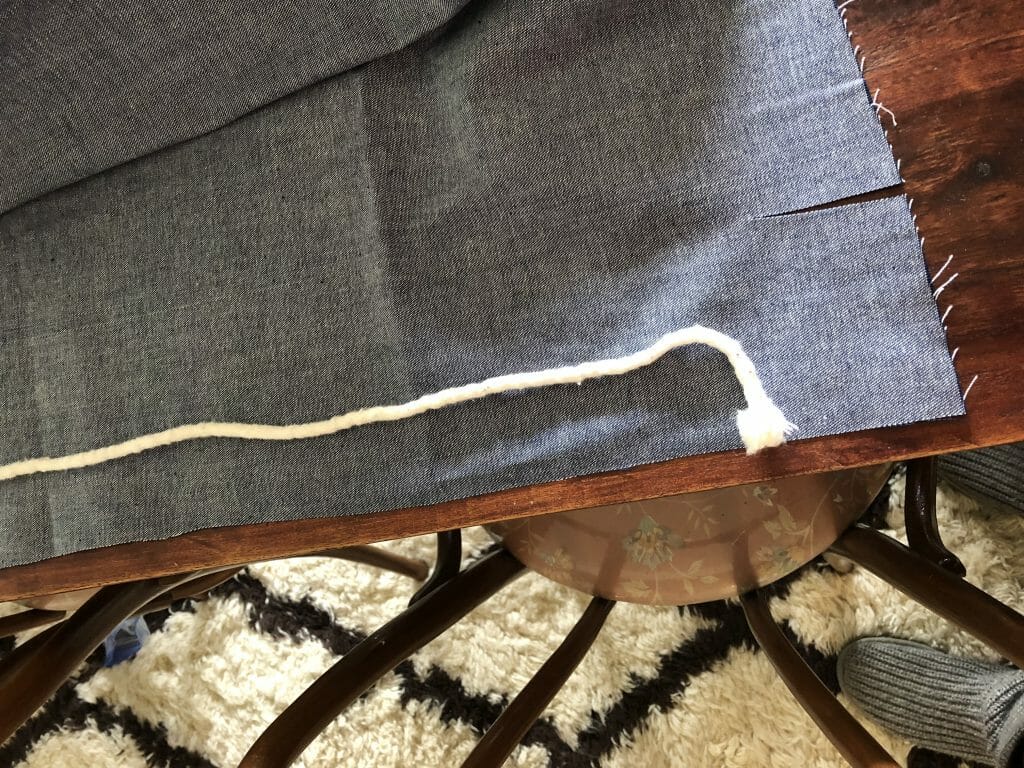 Next, I cut the fabric that was going to run along the side of the pouf.  To do this, I used the same length as the cord and cord fabric, measured the height of the pouf (mine was 12″) and added a couple of extra inches to make room for sewing and seams.  When wrapped around the existing hassock, it looked like this and you can see that it’s taller as it should be at this point.  I want to add a sidenote…. I was using denim with a finished edge on the bottom, not a cut edge, as you can see.  However, if you are using fabric with a cut edge, you will need to hem that, so allow another 1/2 inch  to inch for your hem.  I know that a finished edge won’t frat, and I was going to be hiding it with fringe, so I did not bother with the hem here. 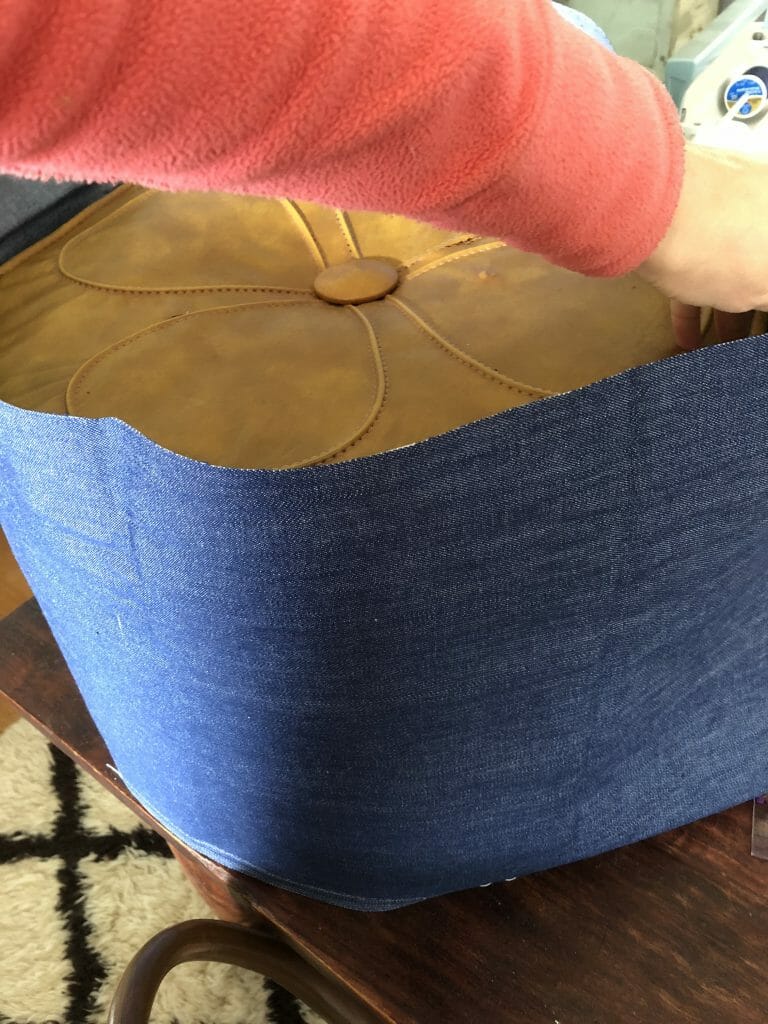 The next piece to measure for was the top of the slipcover.  To do this, I simply placed the fabric underneath of the upside down pouf, and cut around it with about an inch or so excess. 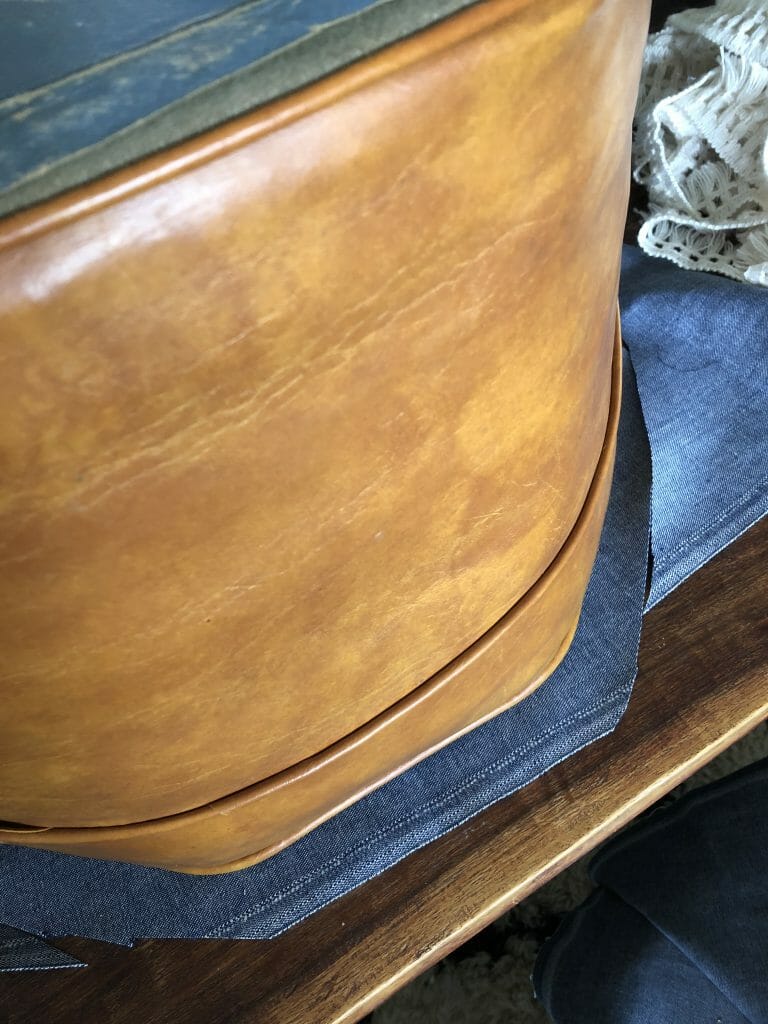 Finally, the last step in cutting was the fringe… I decided I wanted fringe along the top, bottom, and middle of my pouf, so I needed three equal lengths, and I cut them each a couple of inches longer than the length of fabric for the sides so that I had more hanging off each edge as I didn’t want it to fray. 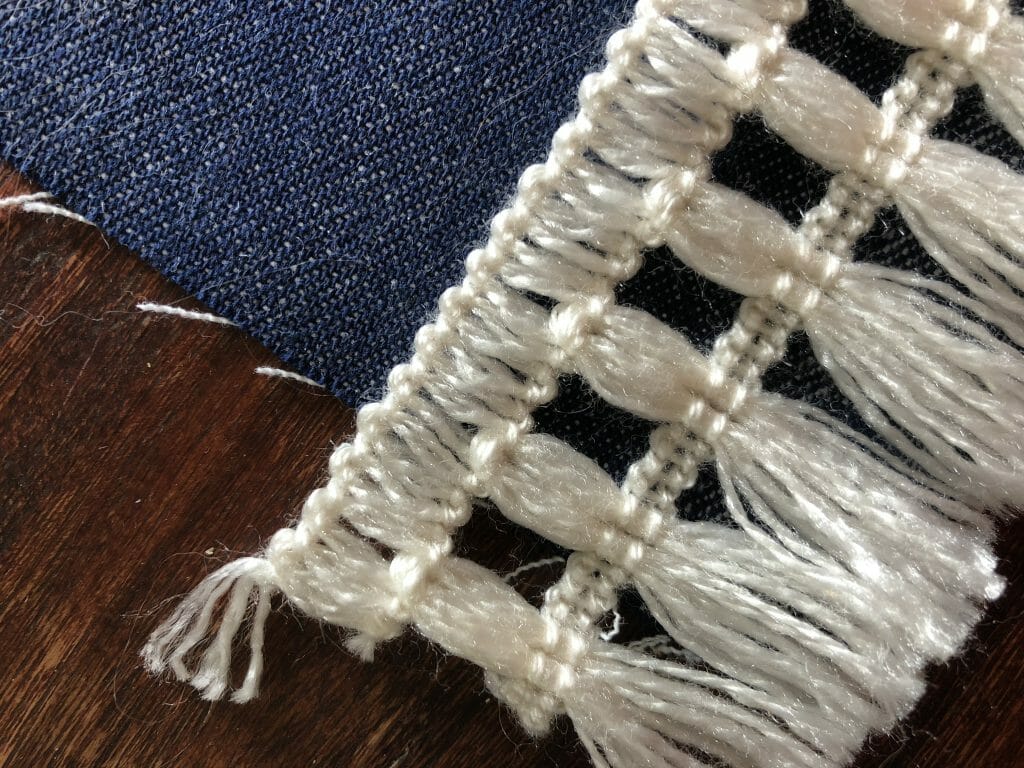 Next I pinned the fringe in place along the bottom, measuring to where the top seam would be and pinning a row there, and then finally pinning the last row of fringe exactly between the other two. 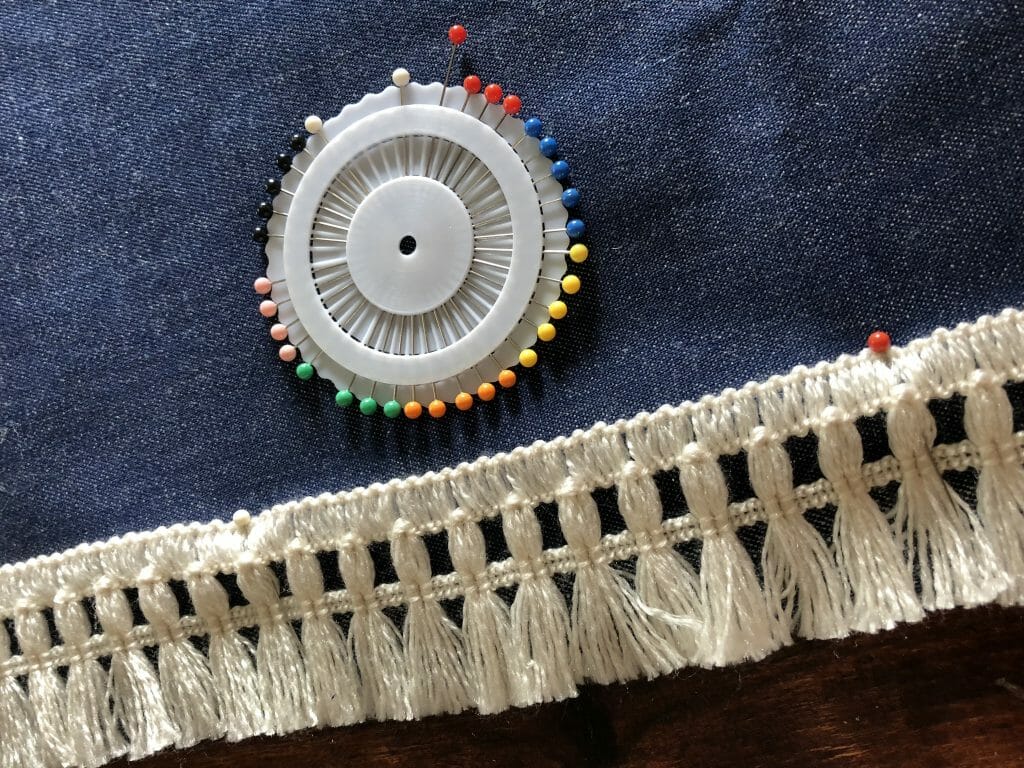 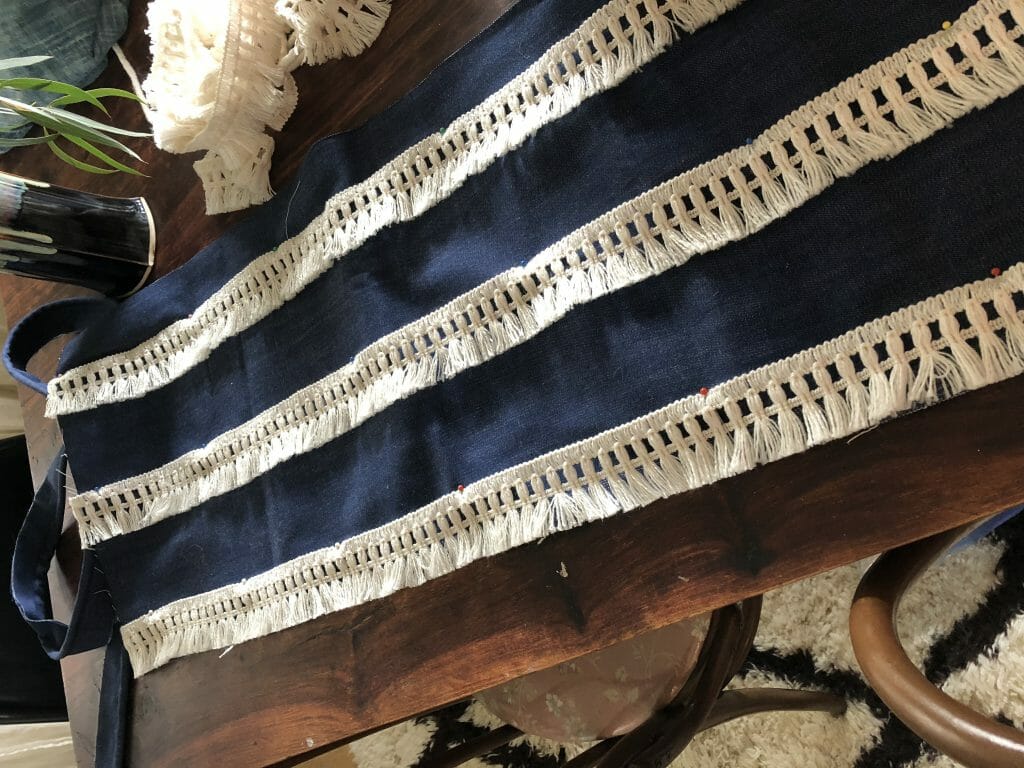 After all of the fringe was pinned in place, I set to work sewing it onto the denim fabric, using a zig zag stitch along the top of the trim.  The red on the stitch selection below indicates which stitch I used. 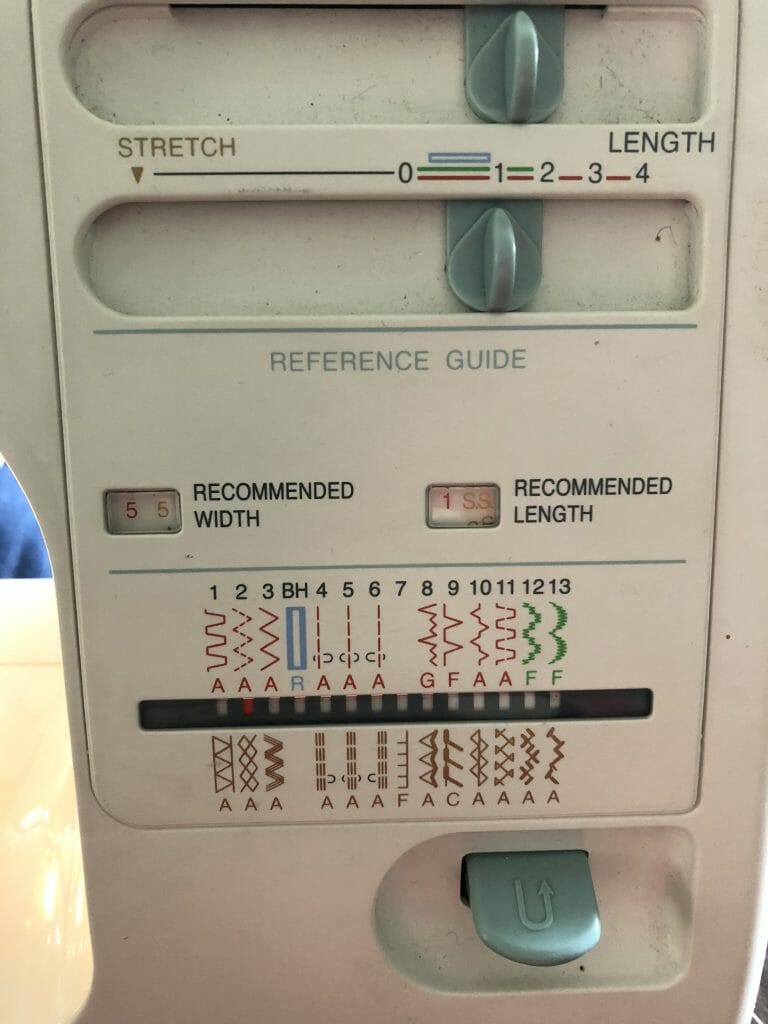 Obviously, white thread could have been used here, but I love contrast and decided to use navy. 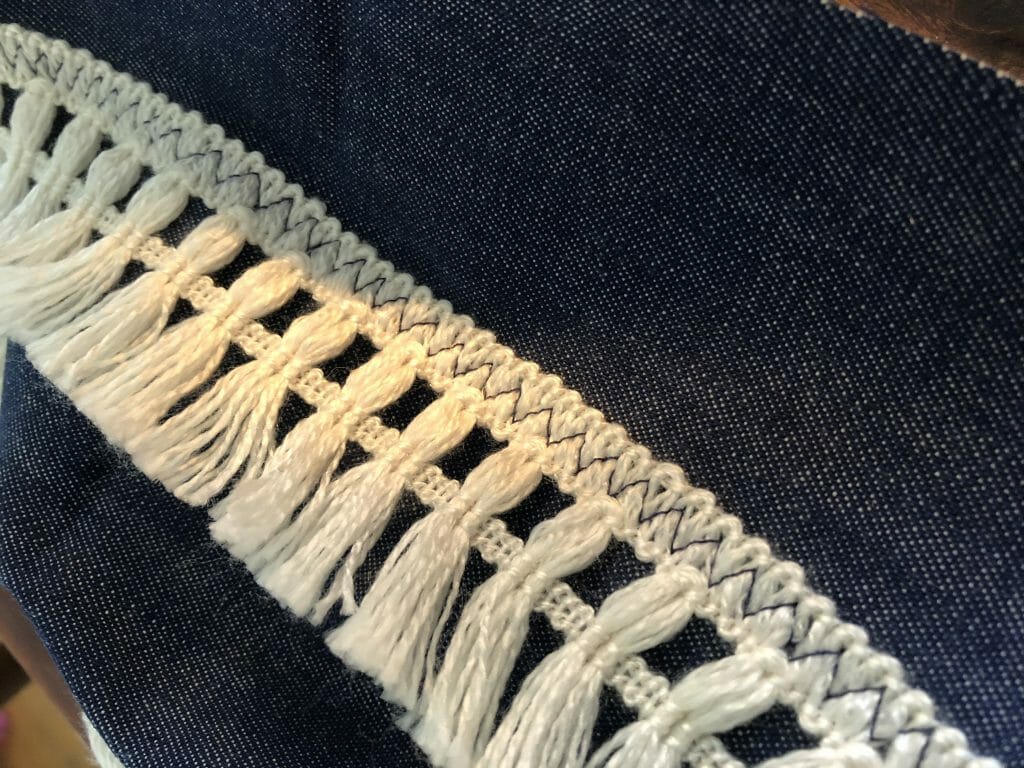 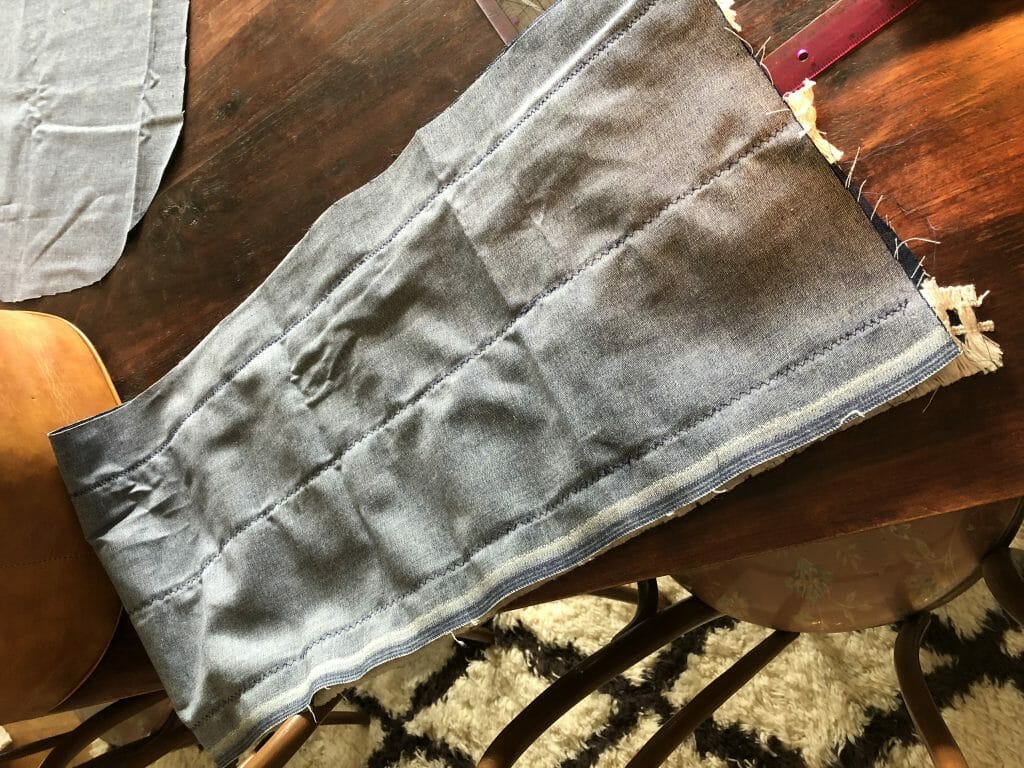 I sewed the two edges together, creating one big loop, otherwise known as an inside out version of the ottoman side.  I then flipped it right side out and slid it onto the pouf to make sure it fit securely. Hooray! 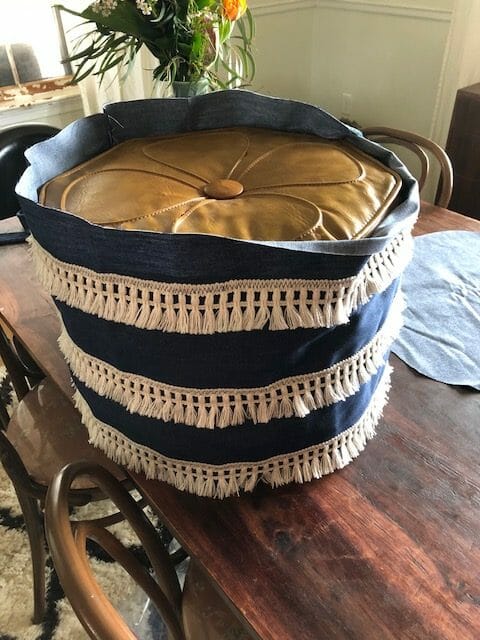 The next step was to make the piping for around the top edge.  This step is truly simpler than you might imagine, and something about piping just makes it look more complete in the end.  To create the piping, simply place the cording in the center of the pre-cut strip of fabric, fold the fabric in half length wise, and sew a straight line right next to the enveloped cording.  Below you can see I am about to feed it into the machine and start sewing my line. The lump on the fabric is the cording. 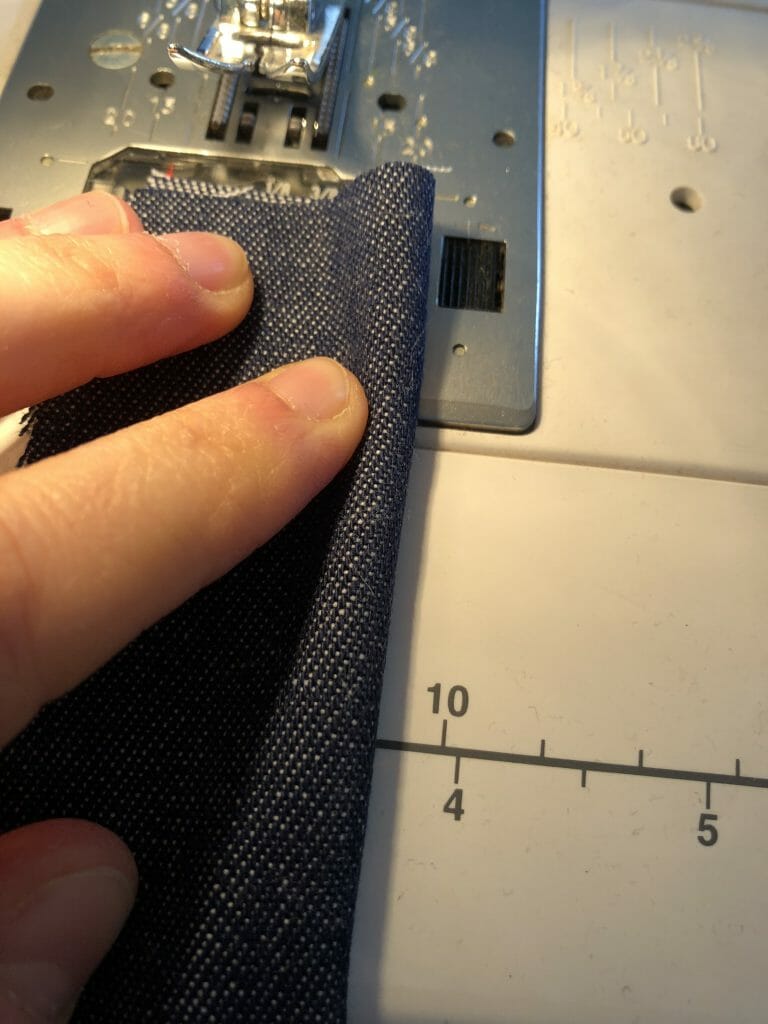 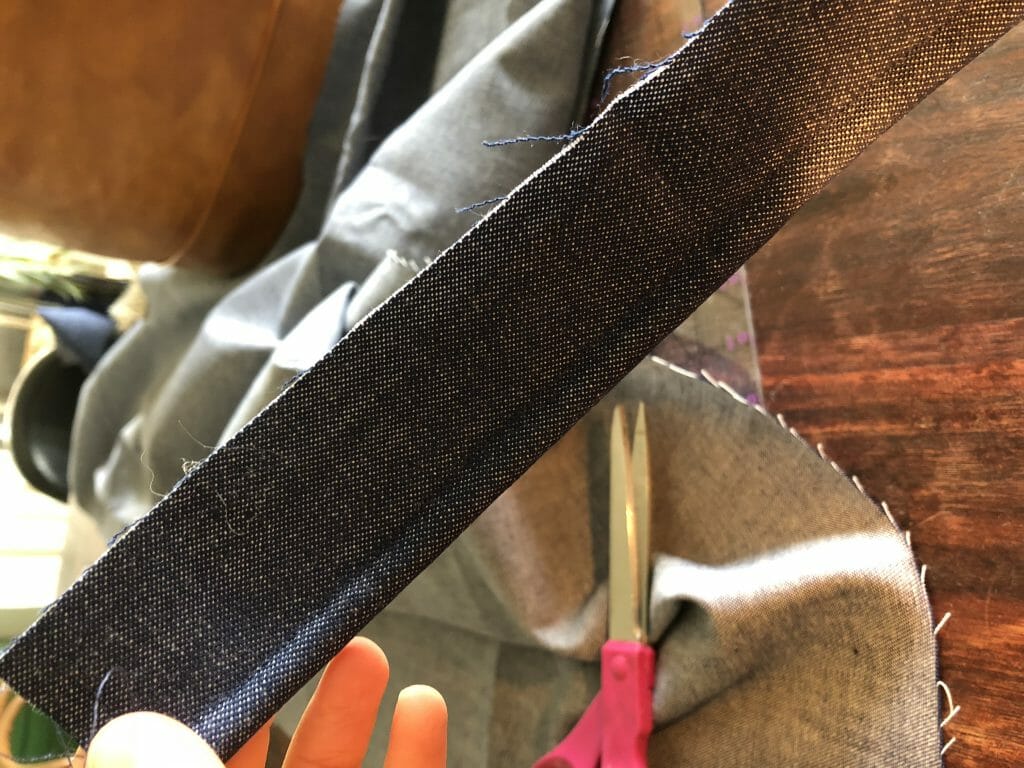 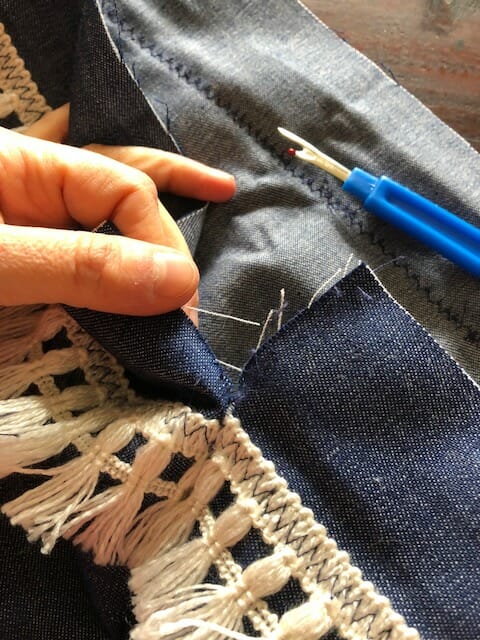 With that seam opened at the top, I was able to start pinning the oping in place.  It needs to be pinned so the piping sits on the fringe or what will be the edge, and the unfinished edge of the piping fabric lays against the unfinished top edge of the slipcover.  I also had to place an inch or so of piping overlay so that I could tuck this into the seam after as well.  Once I pinned it all in place along the top, I got to sewing.  Once again I used a zig zag stitch for durability.

Once I got to point where my piping ends met, I had to tuck one end into the other, and fold the fabric back a bit so no raw ends were exposed.  Below you can see how I folded the fabric on one end, and tucked the other end into that one, and then I sewed my line to connect the ends. 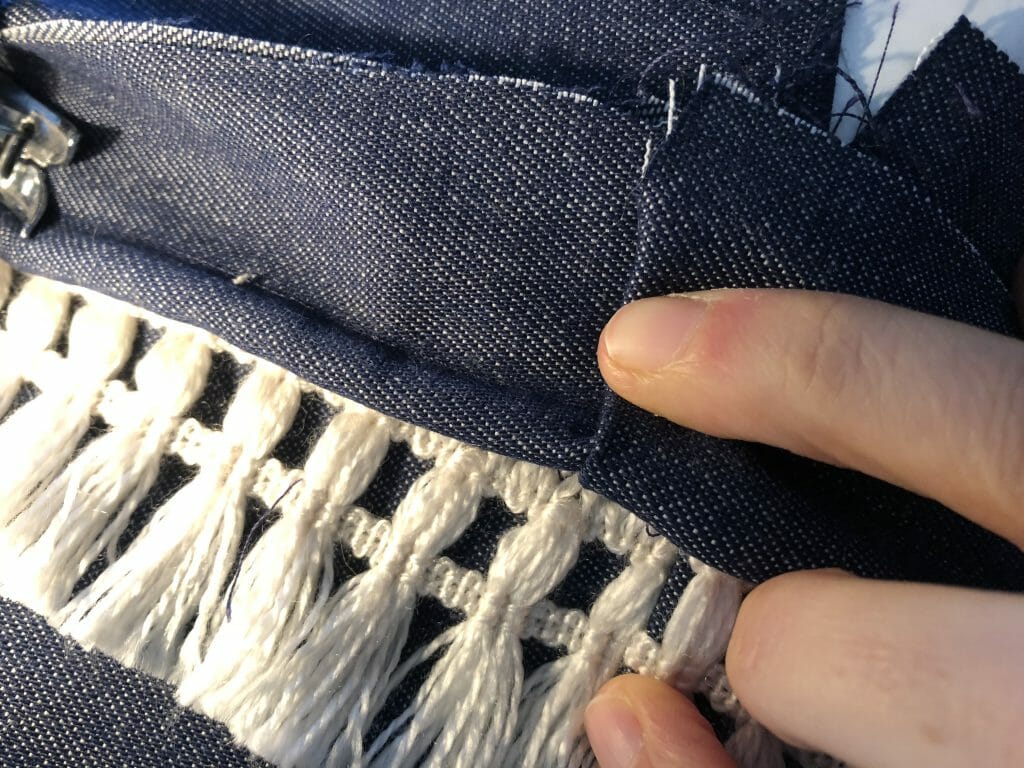 After the piping was fully sewn into place, it looked like this where the ends met. 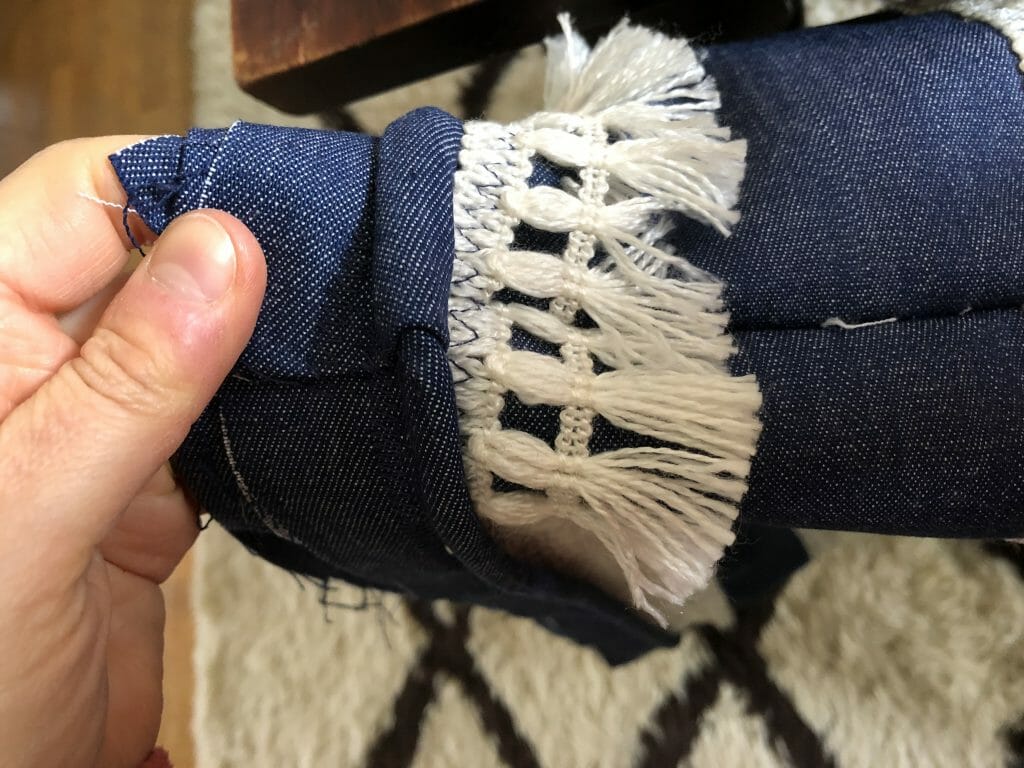 Finally, the last step was sewing the top onto my slipcover.  This step was one of the hardest for me because my top was not just round, it was sort of octagonal, so there were a lot of angles to work with. I didn’t pin into place this time as it was going to make it a little tighter for me to work with, but I lined up the edge of the top with the top edge of the side, dark side to dark side of fabric.  I kept the foot of my machine next to the piping as I wanted the piping to stay at the top edge. 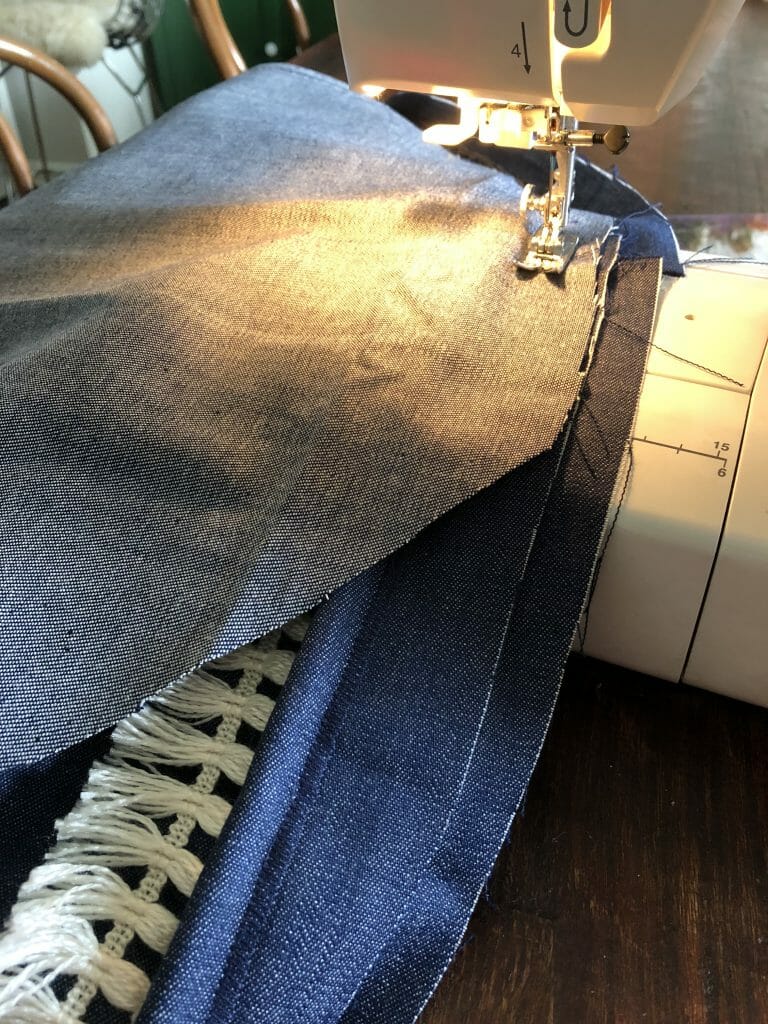 I followed along a straight line using my zig zag stitch and when I was about an inch from where that straight line angled, I made sure my needle was in the fabric, lifted my machine’s foot, and pivoted my fabric, lining up the edges again.  Below you can see the needle in place in the fabric, and this is the point where I pivoted and realigned the fabric pieces. 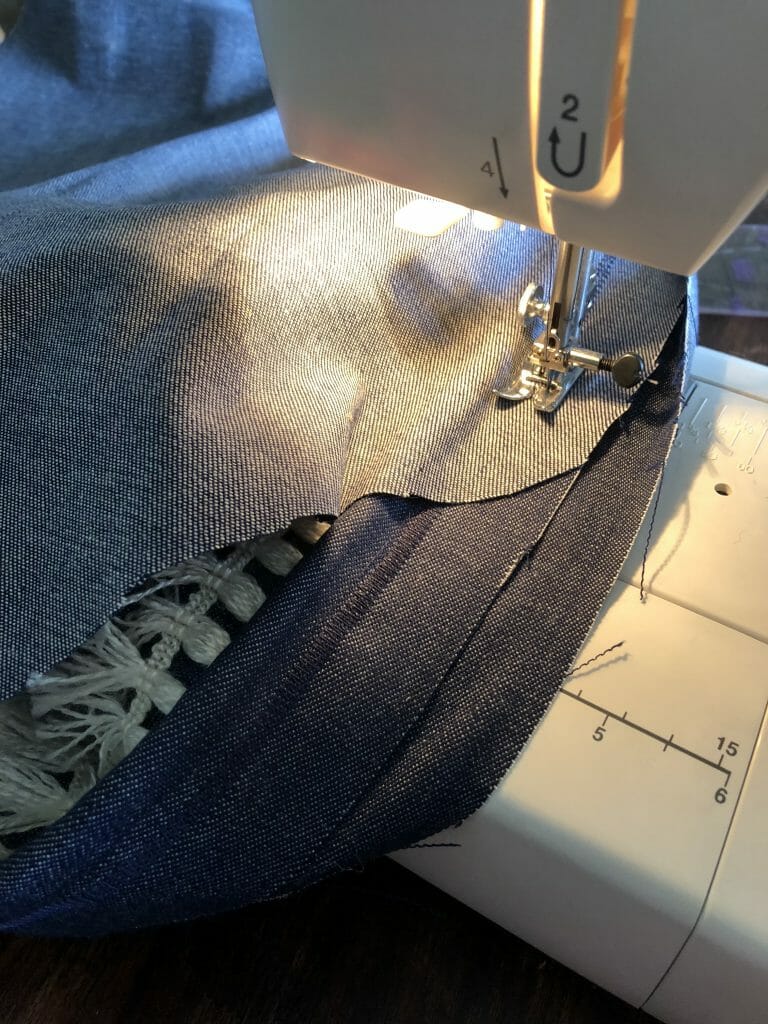 Once I made my way around and had the entire top securely sewn in place, I excitedly turned it inside out to see what it looked like! 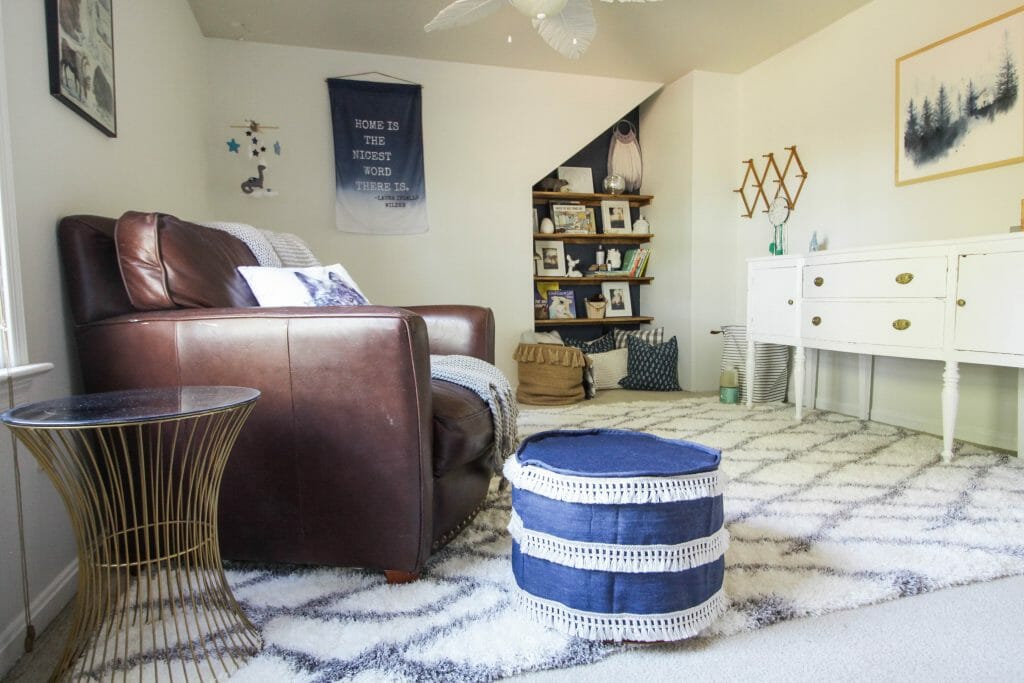 It is not perfect, as you can see the piping was the hardest part for me, and a pro would have done it better, but it’s good enough for us! 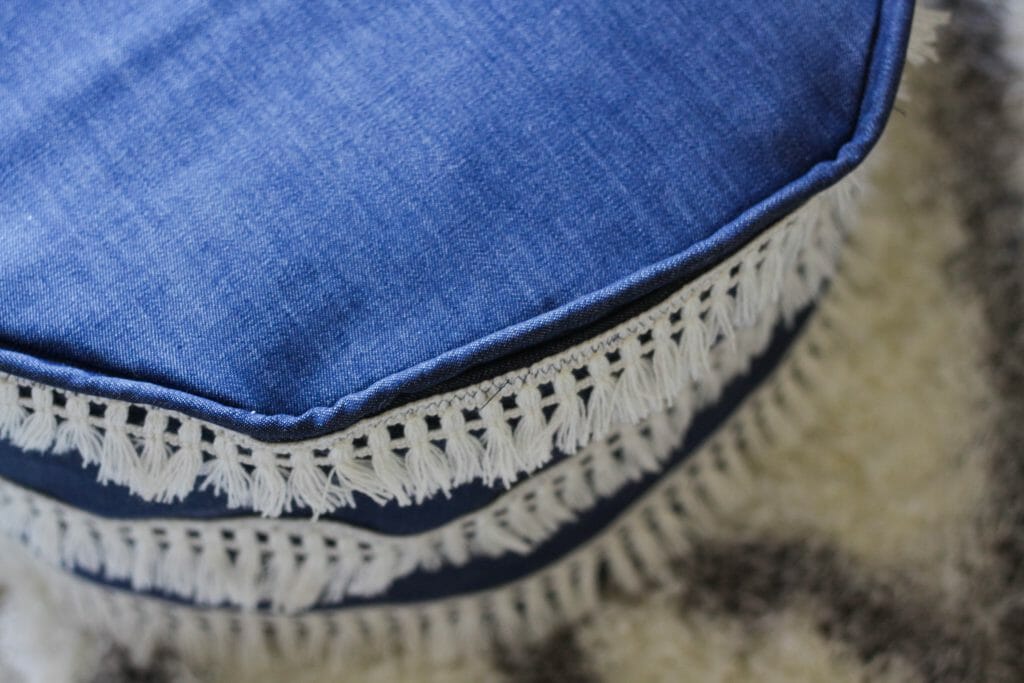 I also love that it brings the blue to that side of the room and now the space feels much more balanced.  It’s coming along!  Wallpaper has just arrived so the closet is next on the checklist… it’s the project that intimidates me the most, but will have such a great impact and be so worth it.

If you liked this project, feel free to pin it.

Thanks, guys!  I will be back on Thursday with a living room Spring refresh to share. 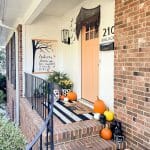 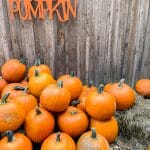 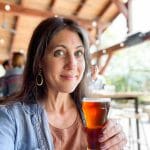 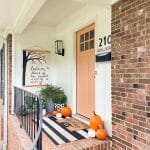 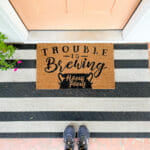