Ever since we painted our hallway white, I have been itching to do something fun in it, but I was struggling to come up with what.  I’ve been in a “fun patterns on the wall” phase since moving in, and our hallway seemed like a fabulous blank slate, just waiting for its moment to shine.  Last week as I looked ahead at the rainy weekend forecast, I decided it was time to do something about it.  We weren’t going to be able to work outside, so I was finally going to give that long white hall its makeover.  Today I am going to show you the easy DIY hand-painted black and white rainbow hills mural I created in our hallway.  This project took me just a couple hours and I used paint that I already had leftover from the entry and our master bedroom, so it was 100% free as well. I promise you, this was ridiculously simple as well; trust me when I tell you that I am no artist! 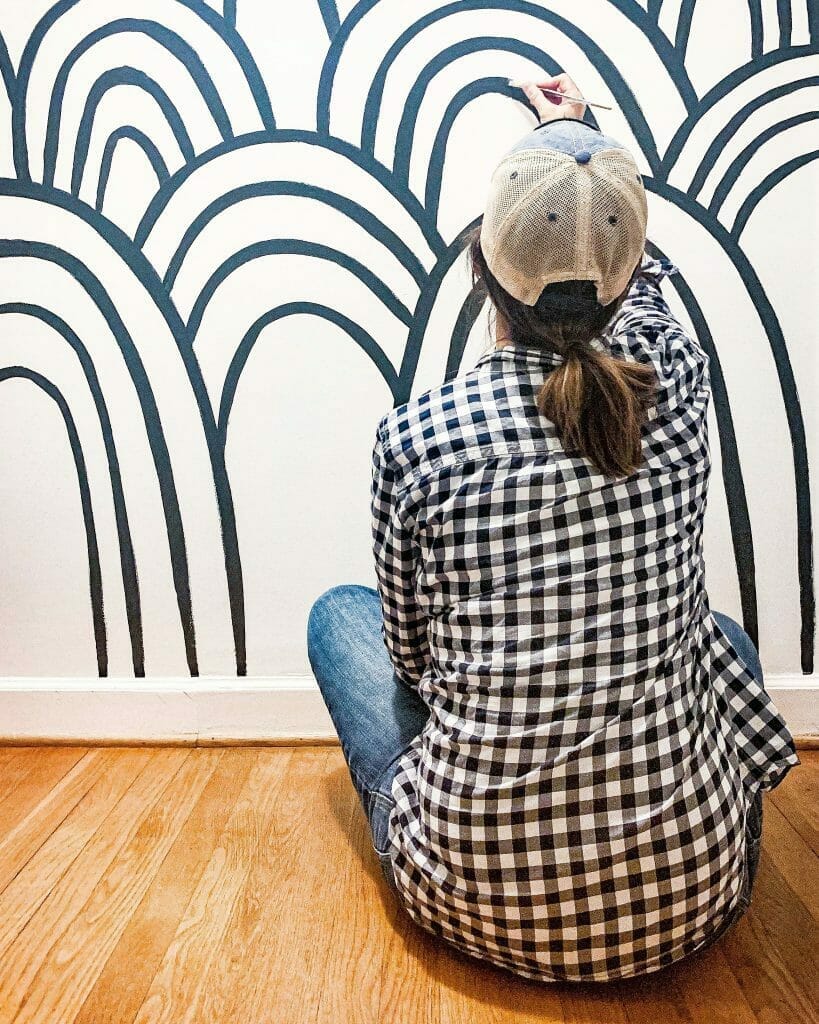 Before I go on, I do want to mention that our hallway gets zero natural light, so all photos in this post were taken with my phone.

Let’s start with the planning process.  This hallway sits directly off of our entry, which you may recall I stenciled with black and white stars. Whatever I decided to do in the hallway needed to jive with the already patterned entry walls 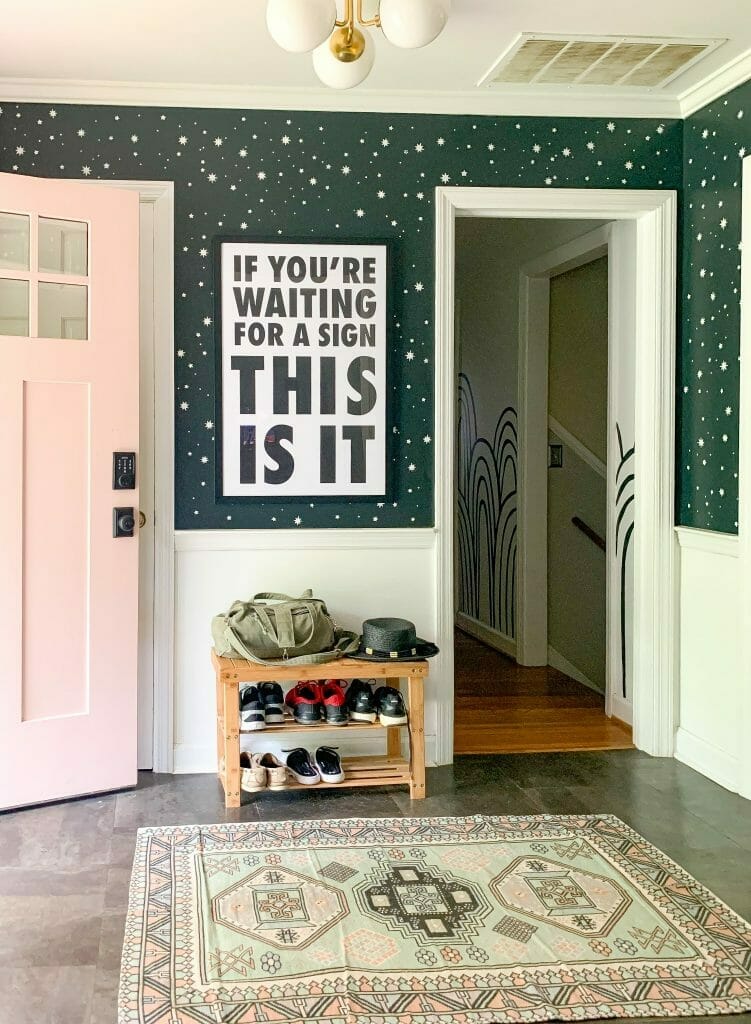 I hopped on pinterest and saved several ideas after searching for black and white murals. (By the way, if you’re not following me on pinterest, you can find me here.  I am always saving creative and budget friendly ideas for the home!).  I mentioned to Chris that I wanted to do something fun in the hallway, and his suggestion was to “hang some photos.” Honestly, I would have loved to hang some beautiful family photos, but I didn’t have any on hand and printing and framing can add up.  I had black paint on hand, so I was leaning in the direction of zero dollars.  As I searched for ideas, I was particularly drawn to a couple of beautiful floral patterns I found; however, I knew that I would be hindered by my actual artistic ability.  Sometimes the dreams and the abilities just aren’t in line, so you must create a new option.  Actually, this was my text chain with one of my best friends Friday morning as she helped me hash out plans. I sent her a screen shot of my mural pins and then went into my thoughts.

I should add, we have conversations like this all the time, and often she’s the one hashing out ideas. It’s so great to have someone who appreciates your crazy and lets you talk it out.

As you can see from our conversation, I recognized that I would be hindered by my lack of artistic talent, so I came up with a plan of creating a rainbow/hill type of wall in black and white.  I sketched the idea out on paper to see if I liked the effect. 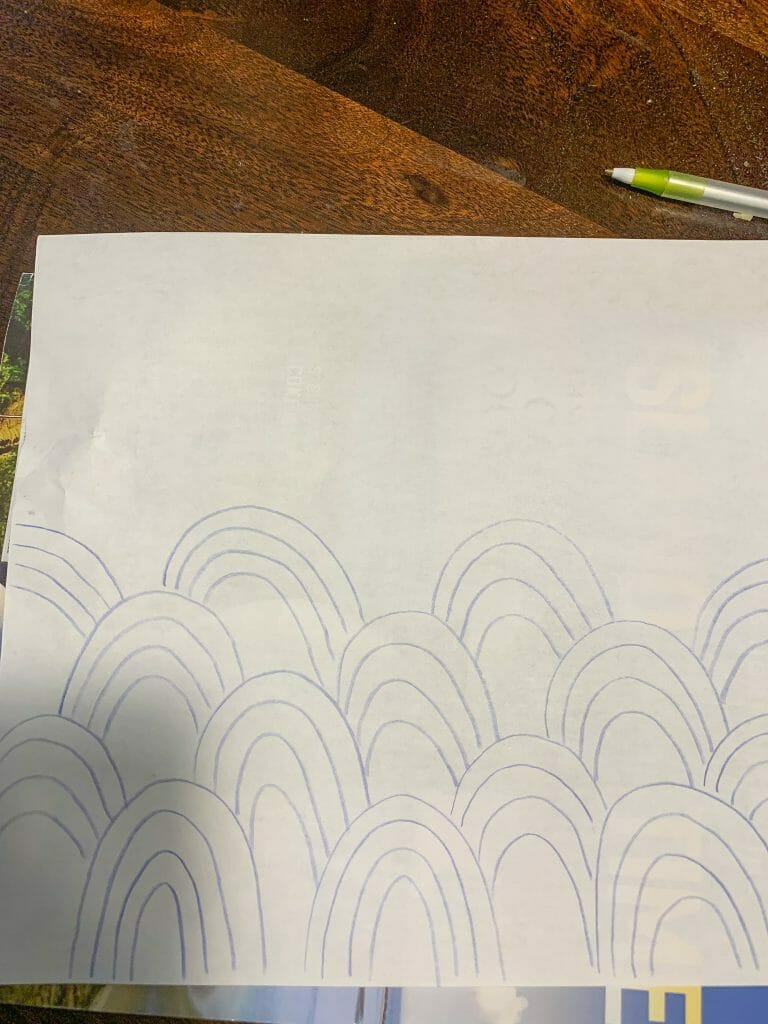 Overall, I felt like it had a cool retro vibe and I was feeling it.  I planned to paint it Saturday when Chris would be home to watch the little one. However, by the time late afternoon on Friday arrived, I was itching to get it started.  I put Wilder down for his second nap (which he only takes sometimes these days) and after he was quiet for a while, I grabbed my can of Sherwin Williams Greenblack paint in eggshell and my angled Purdy brush and got to work.

As a reminder, here’s the blank white space I was working with. 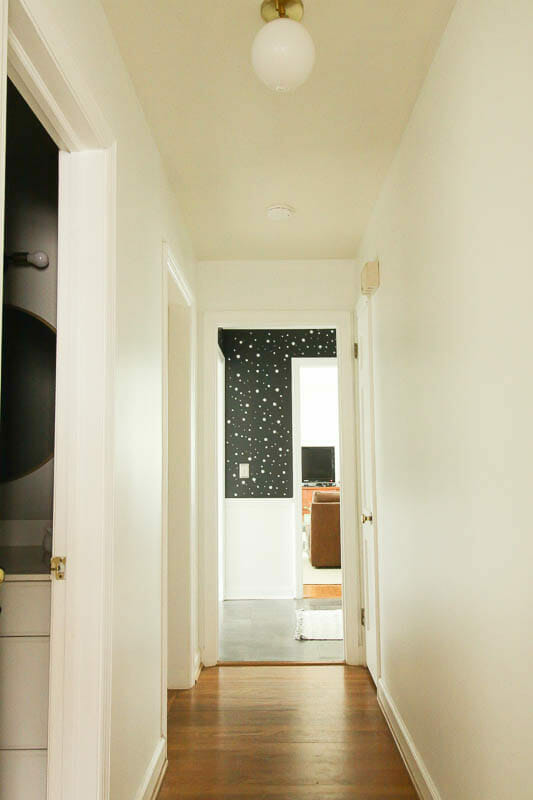 I began just to the right of our hall closet.  I didn’t sketch it out on the wall as it was a pretty simple pattern and perfection was of no matter here. 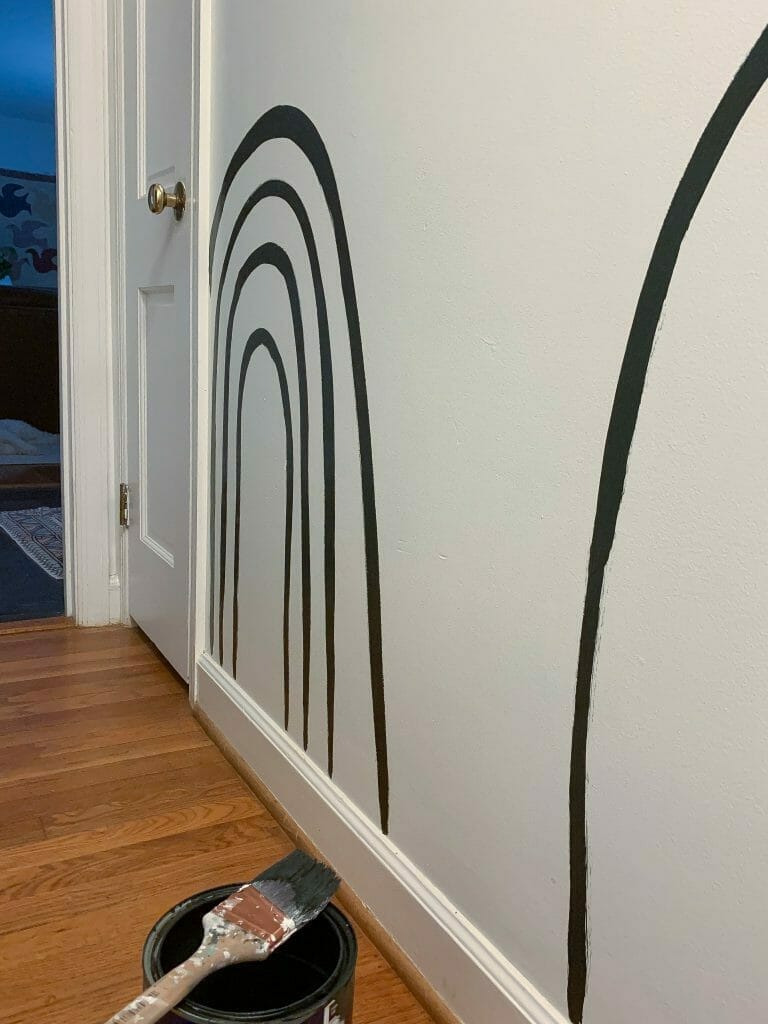 Just after I started, two things happened.  First of all, as with any project I start, I questioned myself and wondered if I was making a huge mistake and worried I would be rolling paint over it the next morning.  Secondly, Wilder let us know that he had just been laying there quietly for a bit and wasn’t actually going to take a nap.  Thankfully, Sawyer and Emmy were home and took over with Wilder so I was able to continue painting.  Using my angled brush, I simply painted the pattern as I went. I got as close to the edges as I possibly could, but I planned to touch up those areas the next day.

I continued along the wall, with just one layer of rainbow hills. 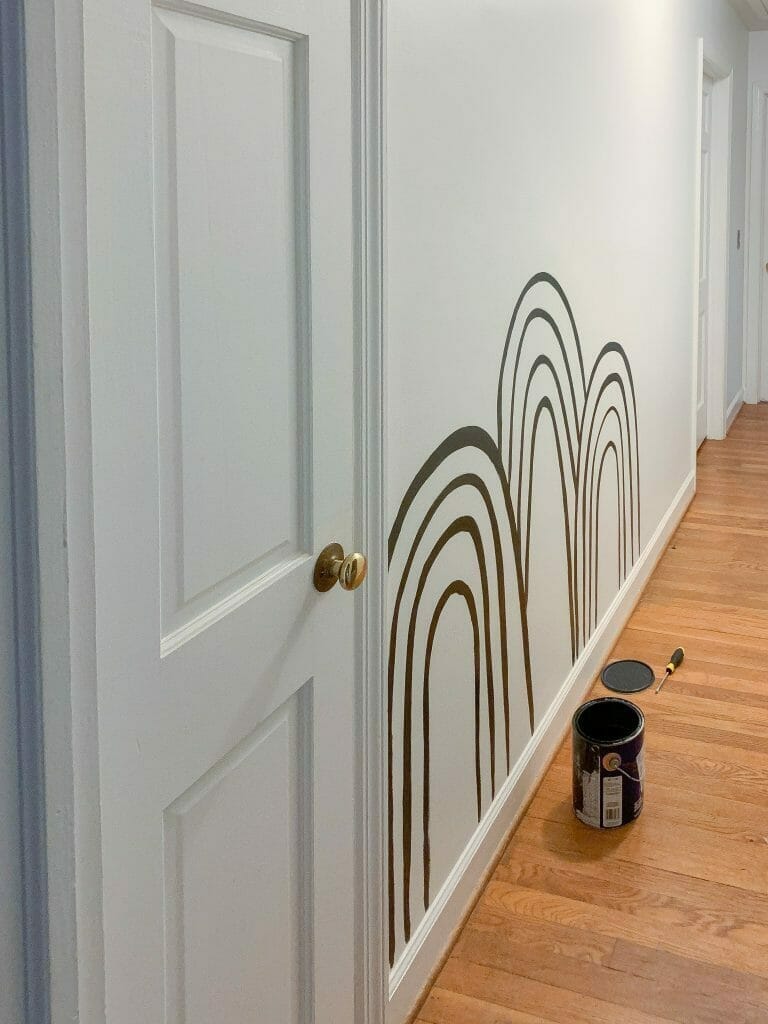 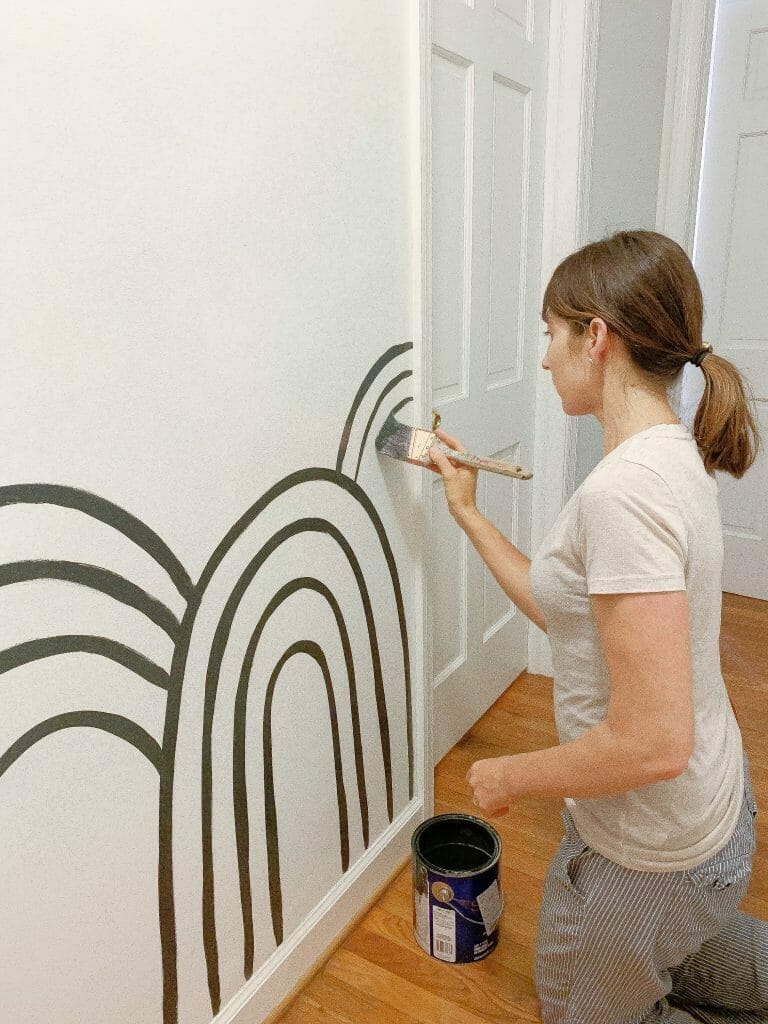 Catcher was not sure about this mural, as evidenced by his expression here.  He literally looks like he’s thinking, “I just can’t even look at it!” 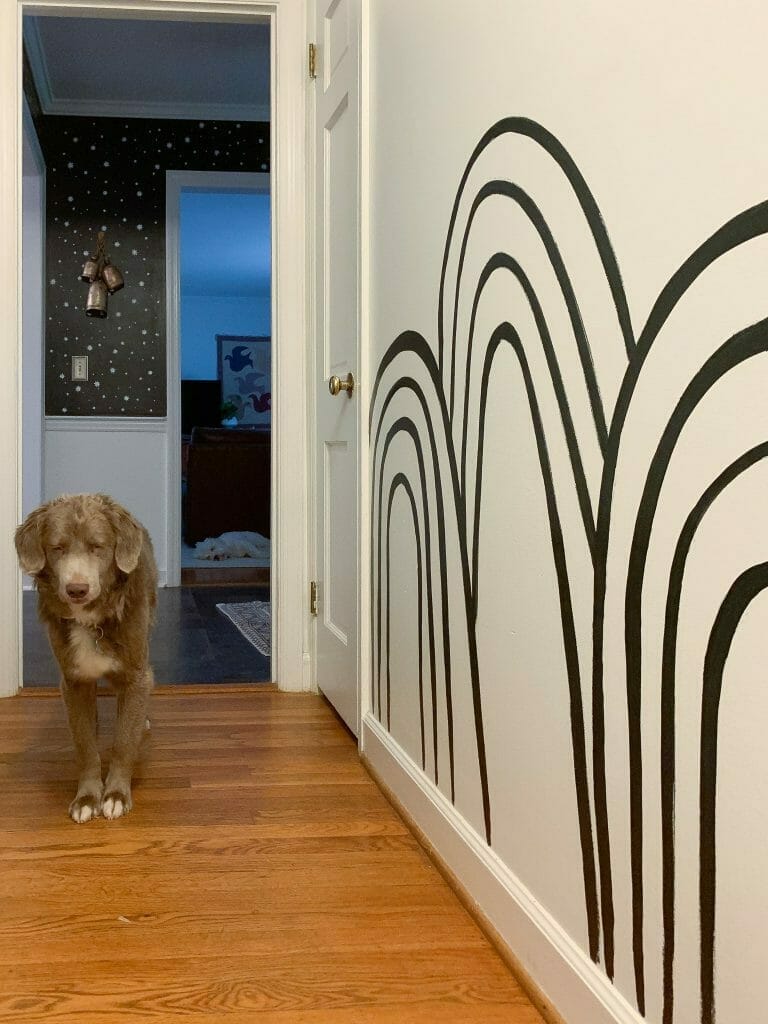 After this section of the wall had its first layer, Emmy came to hang out and chat.  My older kids are growing fast, so I try to really enjoy these moments and listen. To be honest, as seen in her own bedroom, she has an eye for design and she’s a very creative spirit, so I always love having her with me when projects like this are happening.  She’s helpful, encouraging, and has great ideas. 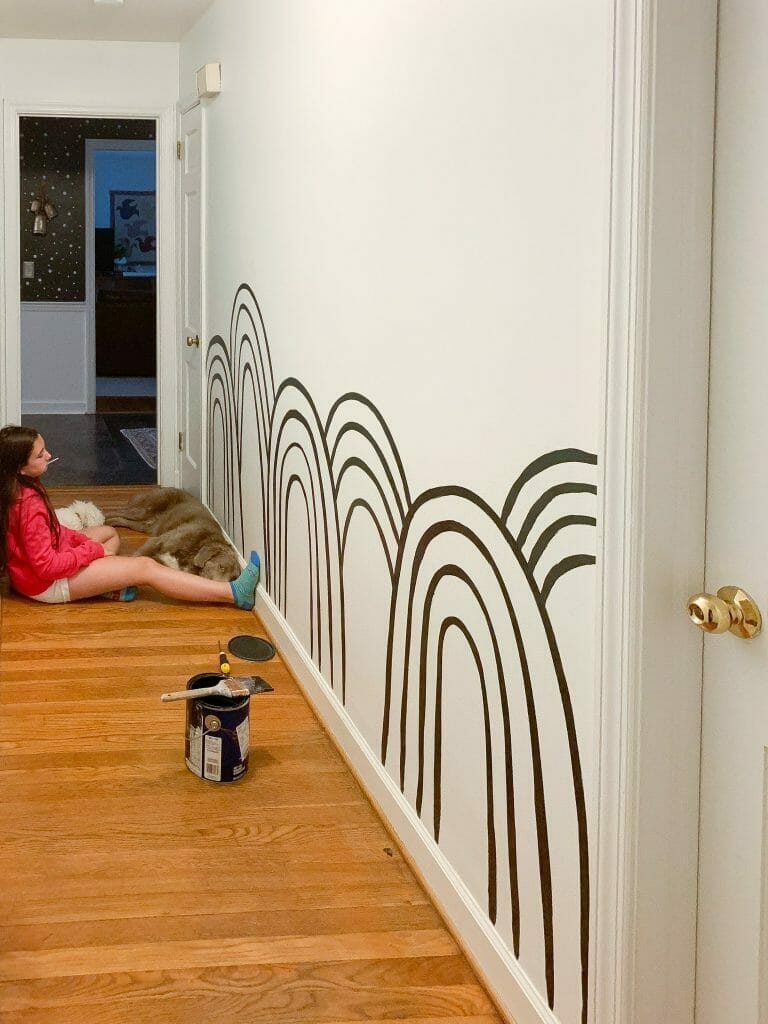 At this point, I wasn’t totally sure how high I was going to go, so just added the next layer and figured I could go from there. 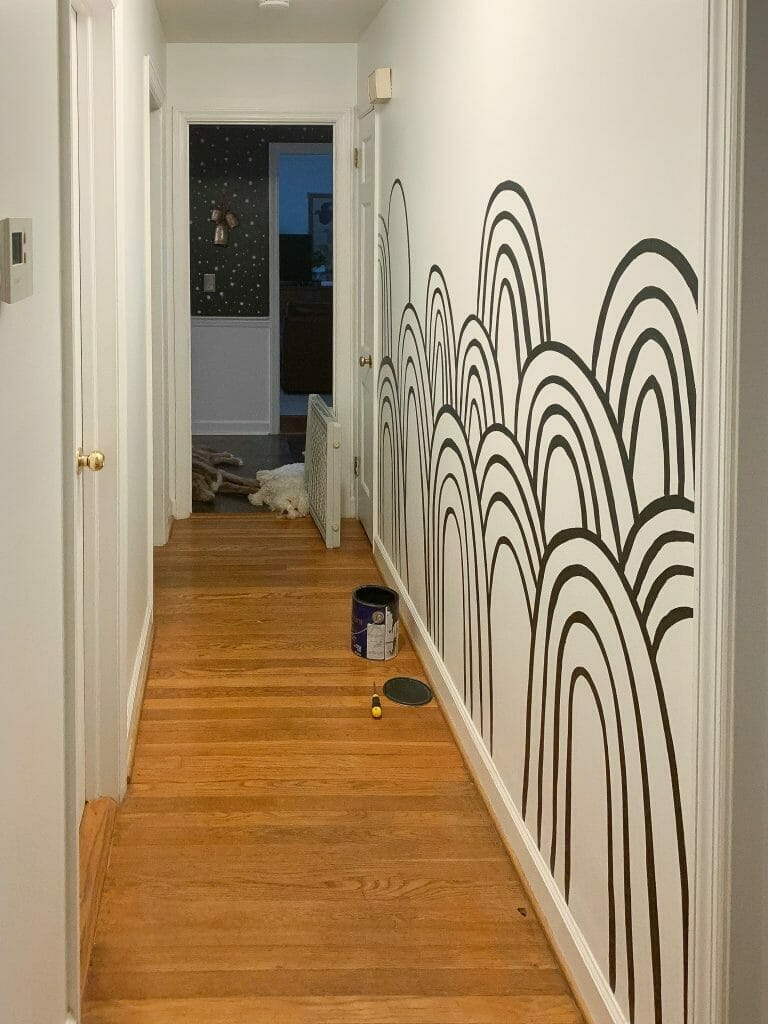 At this point, I was happy with the height and the pattern and decided that was a good stopping point on that wall and continued with the rest of the hallway until I had all of the walls filled. After that, I cleaned up and put everything away for the night.

Saturday morning, I picked up a small angled artist brush so I could touch up the edges where the paint met the door frames and baseboards. With the larger Purdy brush, this was the best I could do. 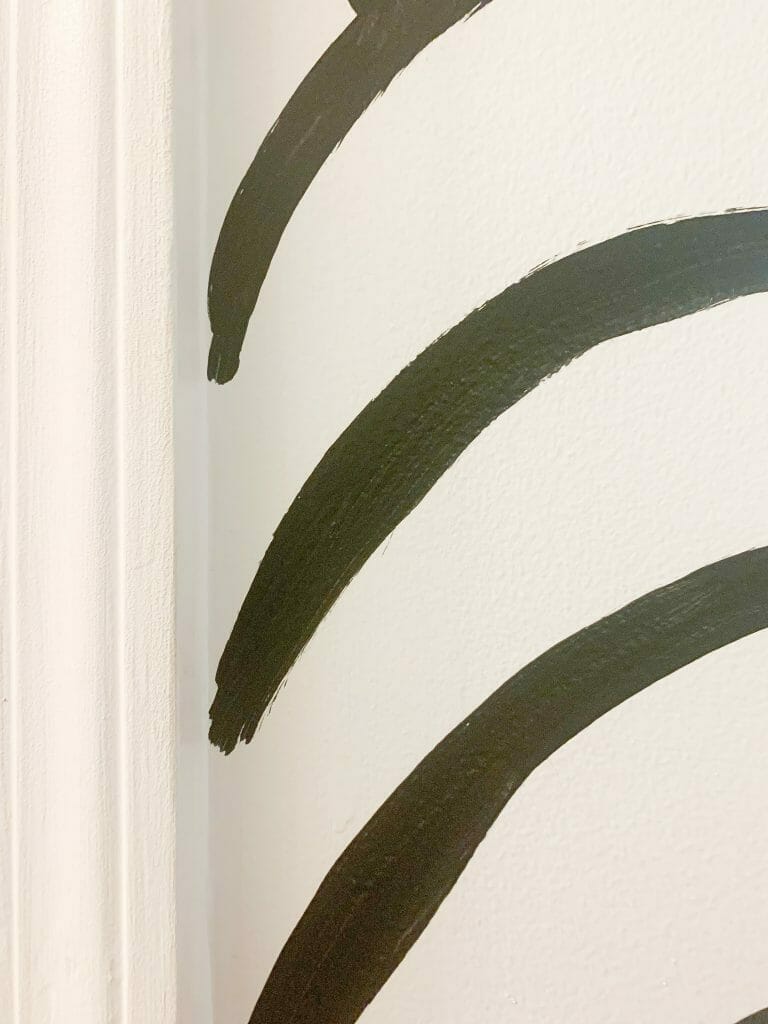 Using a small angled artist brush I borrowed from Emmy, I cleaned up those edges a bit. 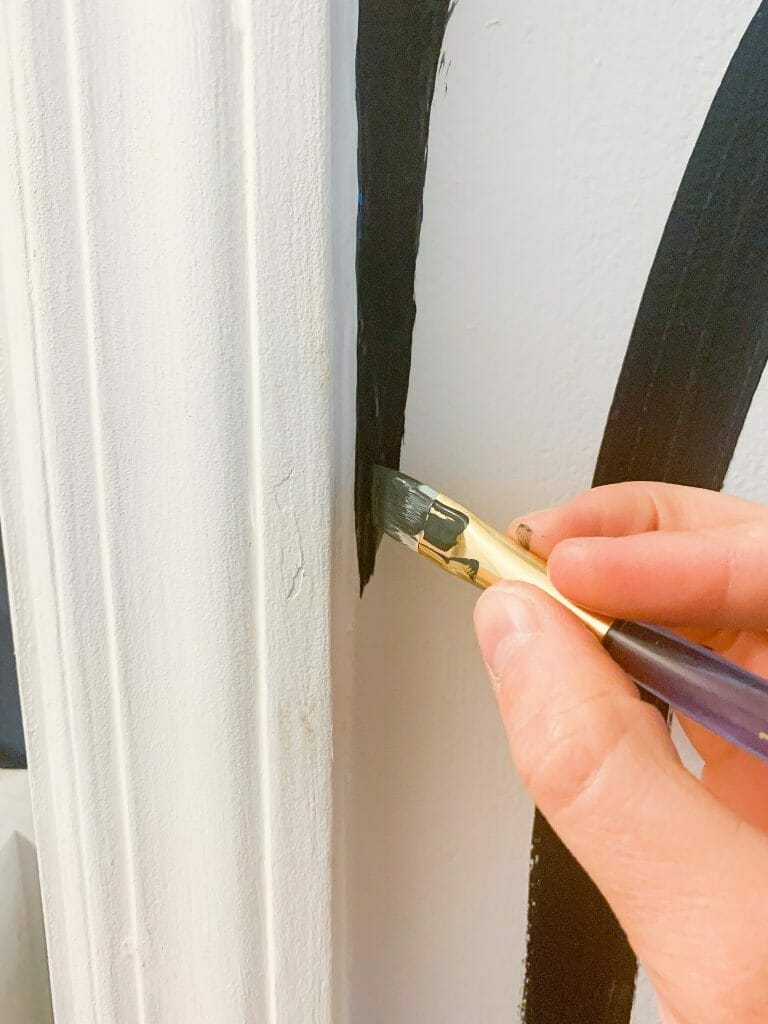 Afterwards, they still were not perfect, but I didn’t want them to be since the rest of the wall was rather imperfect.  However, they were much improved. 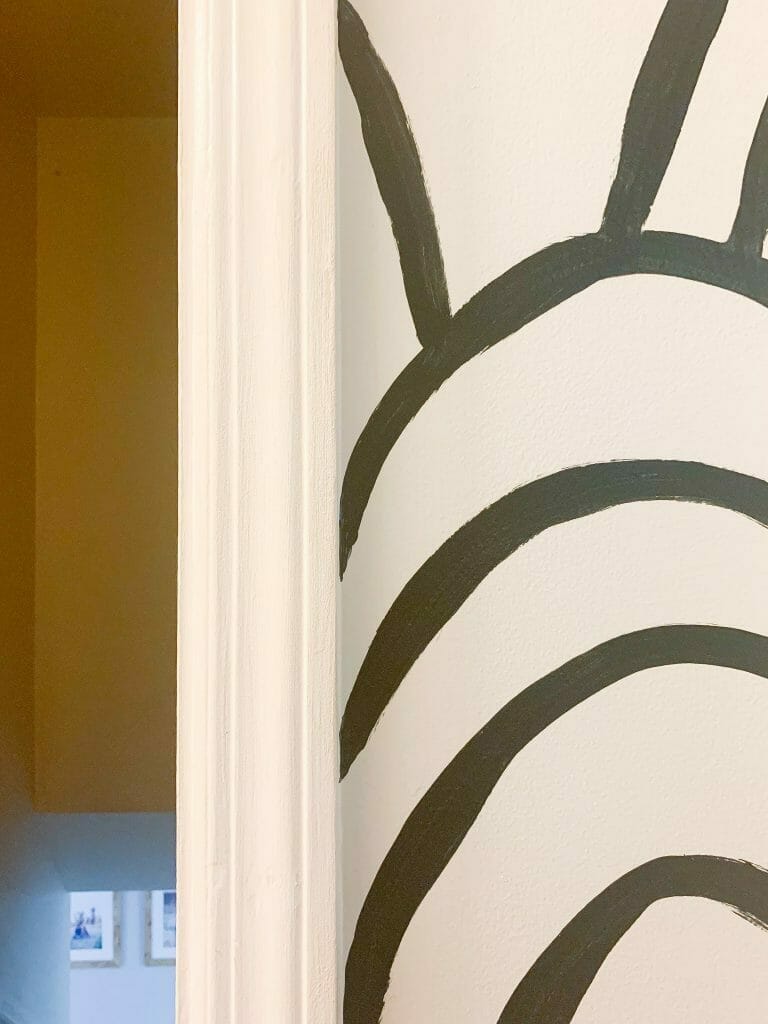 As I said, my paint job is rather imperfect, paint strokes are visible, but I wanted it to appear as hand-painted as it was.  Up close, I could easily scrutinize every little detail, but overall, the effect was exactly what I had been after.  The walls felt fun, cheerful and had a bit of a retro vibe perfect for this 1966 house. 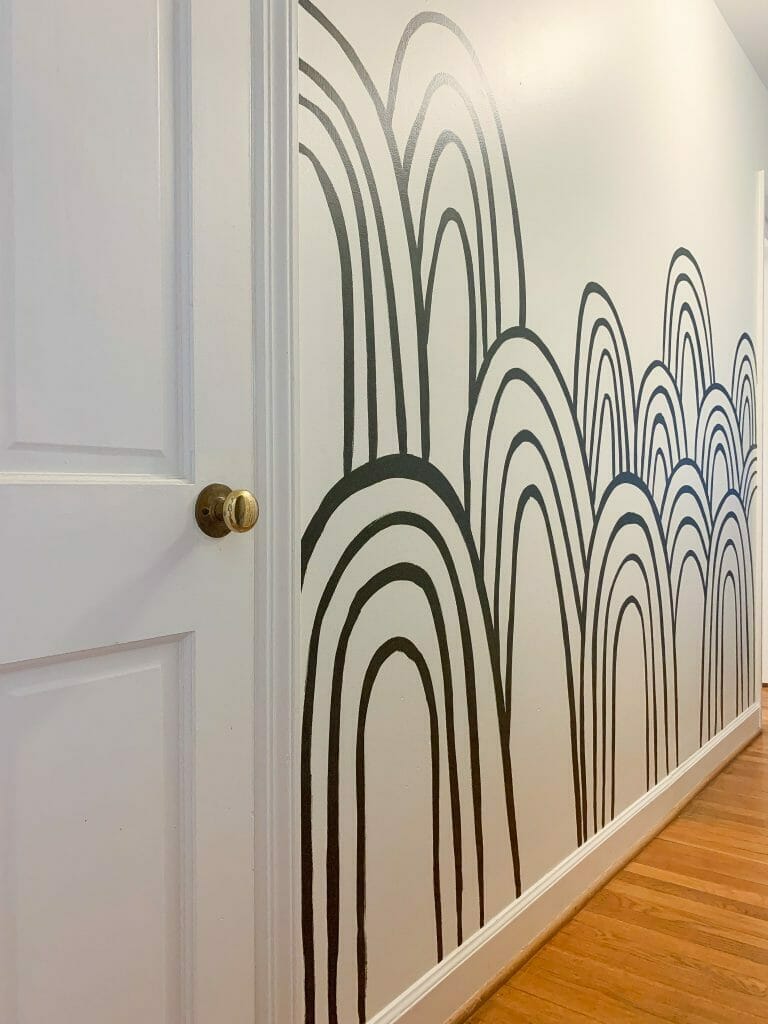 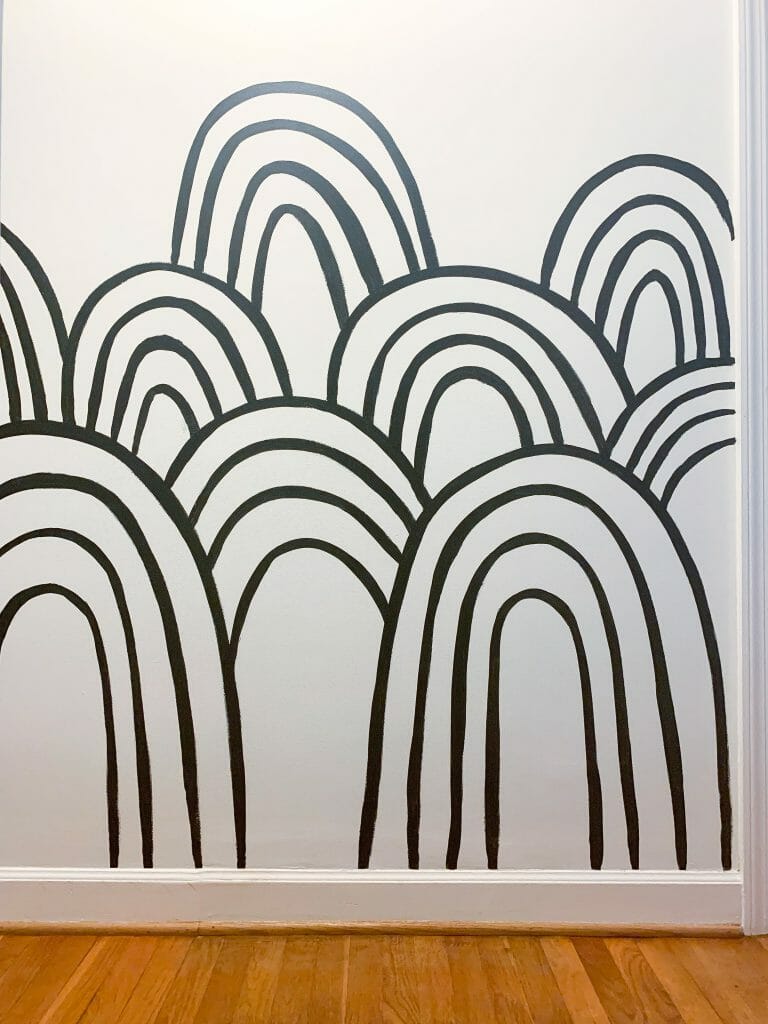 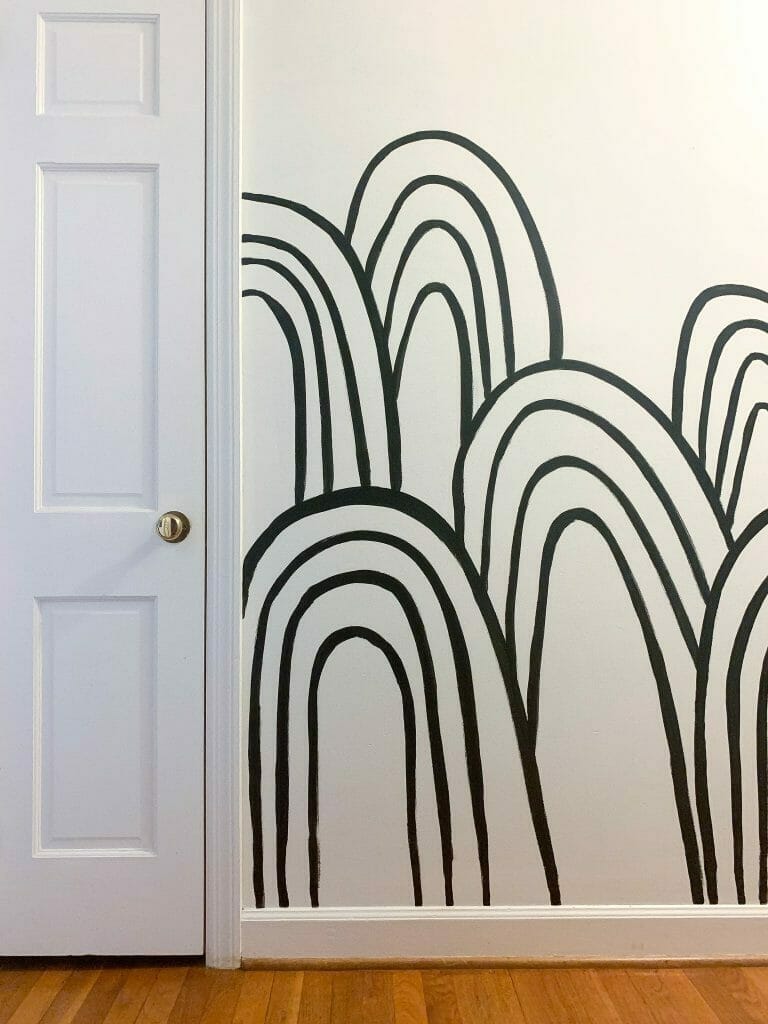 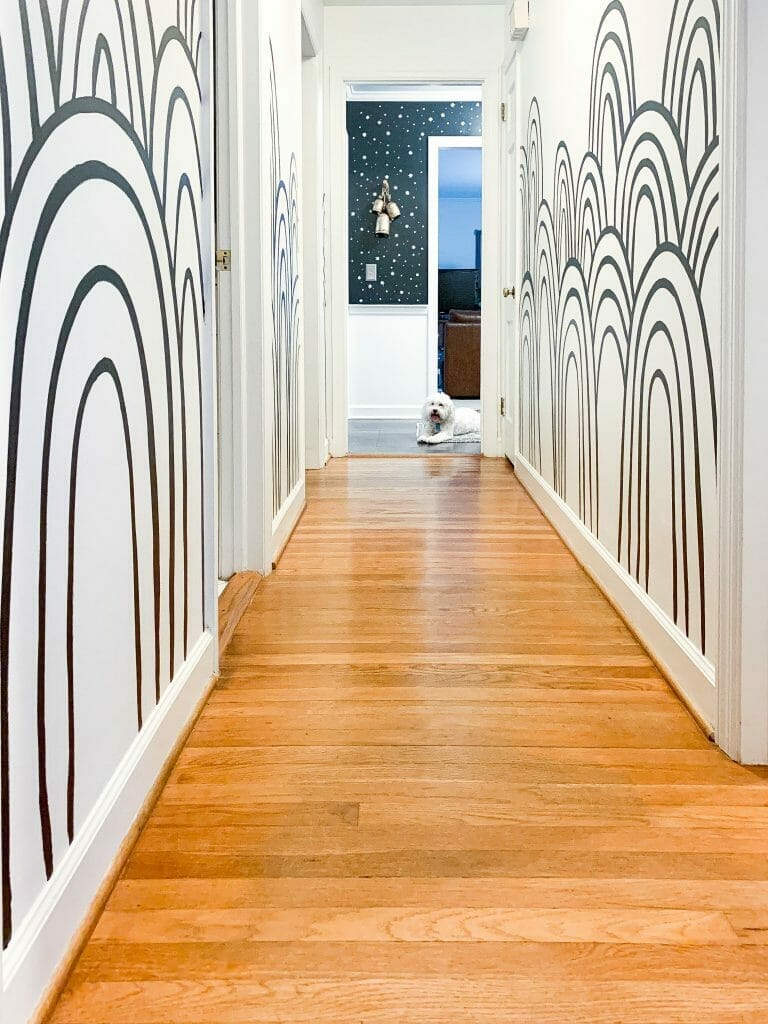 As I stepped back, I had to  have a little chuckle at myself.  Clearly, I am really having a black and white pattern moment right now.  From this perspective, one can see the newly painted hallway, the stenciled entry, and Wilder’s wallpapered nursery. 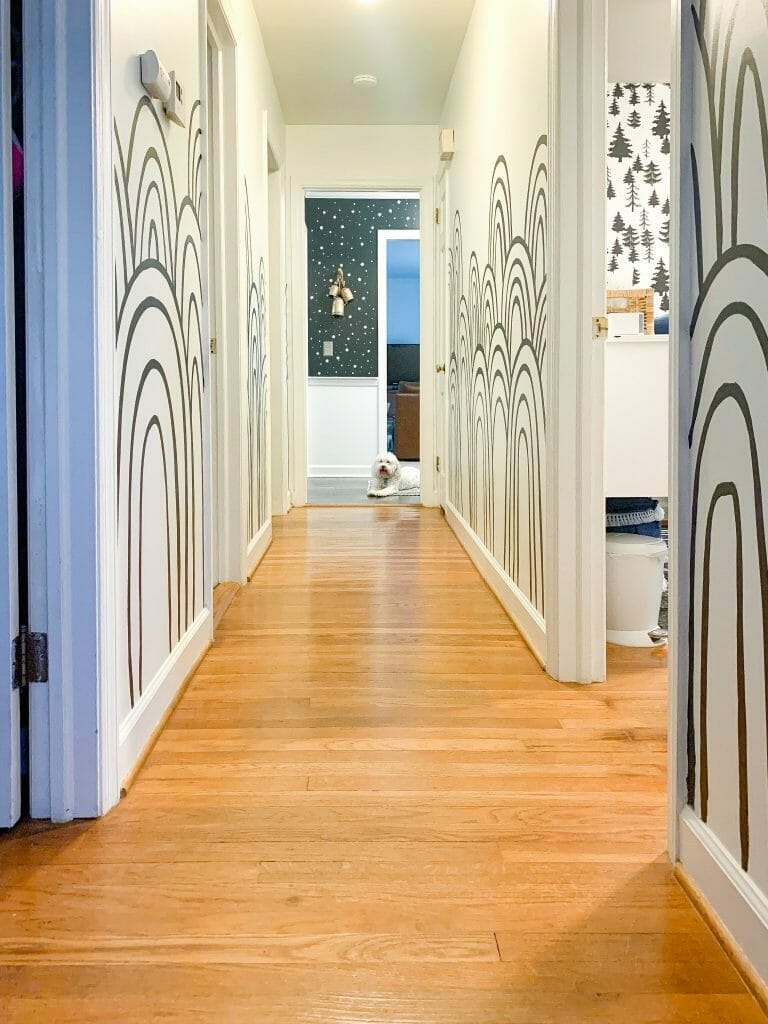 This pattern really works here because it’s similarly colored, and is large scale compared to the other two patterns. 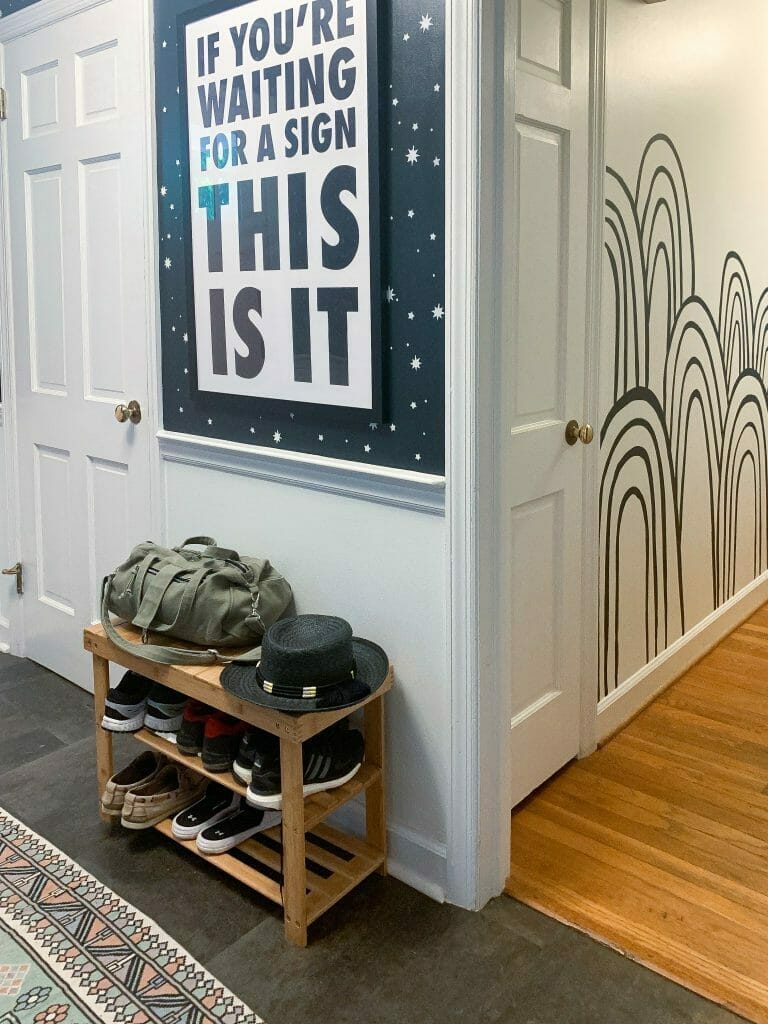 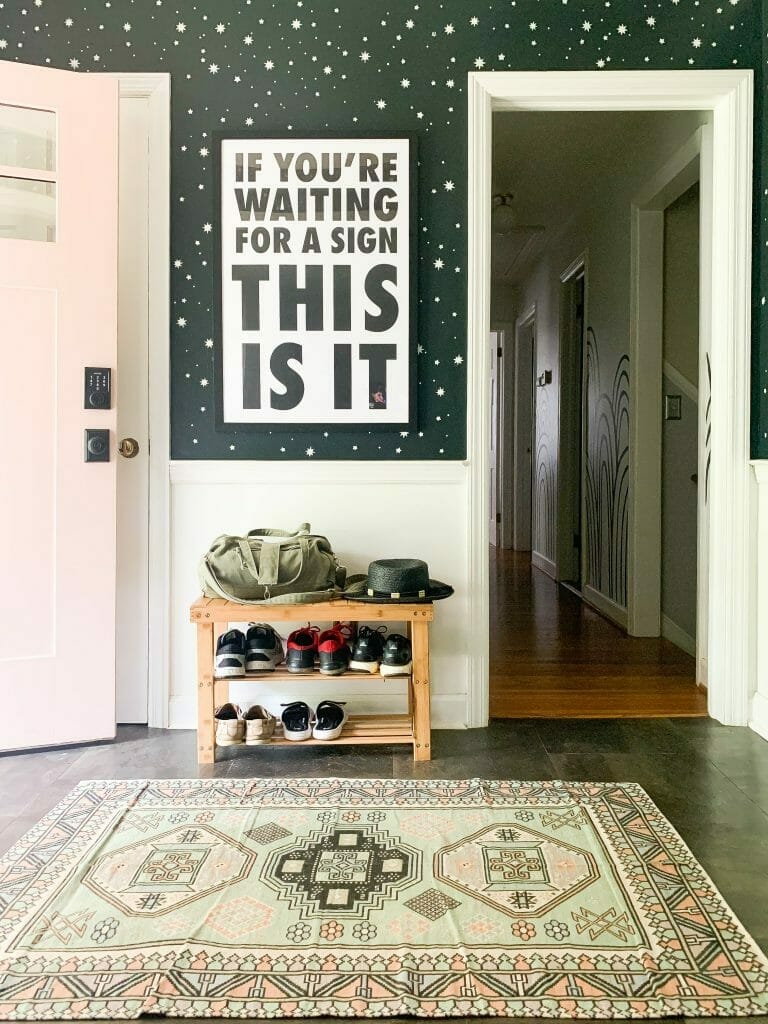 This space is unfortunately so incredible hard to photograph, but hopefully you have gotten a feel for the whimsical and modern yet vintage vibe I am working to create in our home.

The good news is that I am really thrilled with how it turned out and won’t be repainting these walls any time soon.  If you’re considering a crazy paint treatment somewhere, I encourage you to step out of the box and go for it!  The worst that can happen is you waste a little paint and a little time and end up painting over it, but the best possible outcome is that you create something unique that you can be proud of!

Tell me the most daring change you’ve made in your home?  Or what are you too afraid to try but have been pondering? 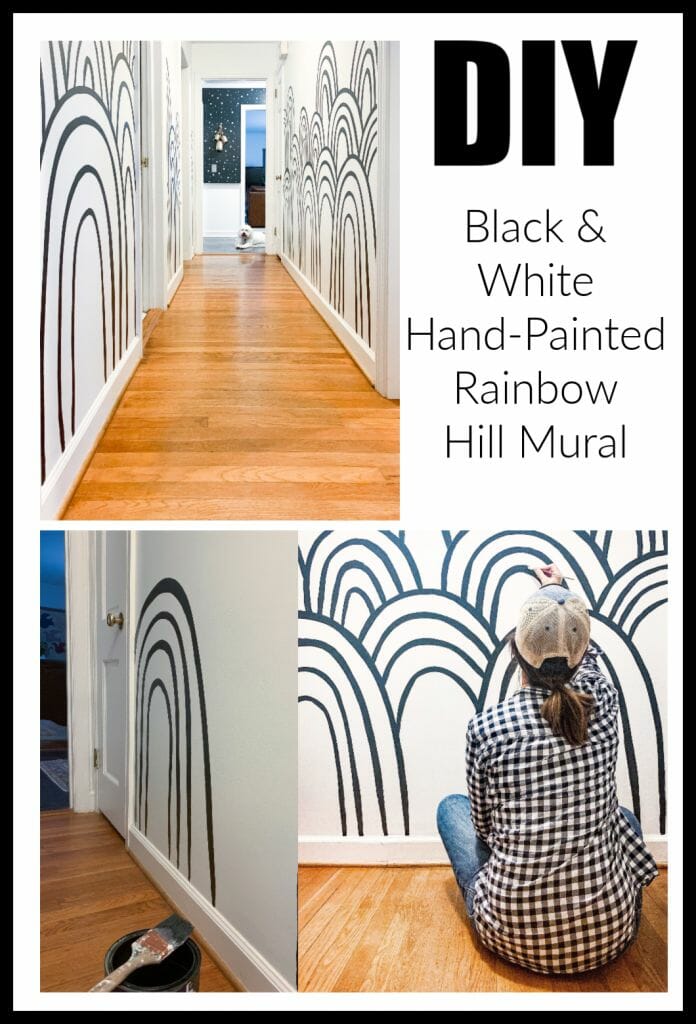