Happy Tuesday! I meant to share this yesterday, but Sunday after work I came down with a terrible headache and ended up in bed at 5:45.  If you know of any tried and true and natural remedies, let me know! (And not peppermint oil, as it is not safe to use during pregnancy, especially with a history of miscarriage). Anyhow, here I am this sunny but cool Tuesday and I’ve got another super simple Christmas project for you: DIY painted woodland animal ornaments.  No talent is required to paint these…. I promise! 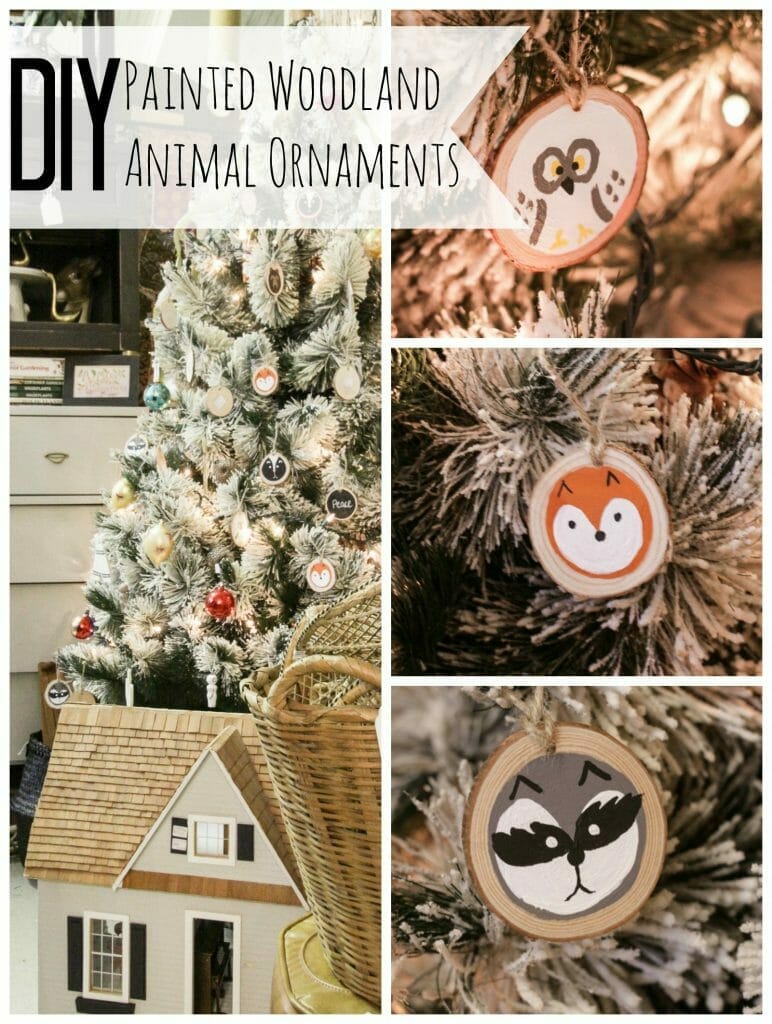 Affiliate links provided- thank you for your support!

You might recall that I used these same wood slices a on wood burned ornaments I shared with you just a couple of weeks ago.  I adore using them as they are so versatile!

For this project you will need:

Now I am going to apologize because I didn’t take step by step photos of these, but I promise it’s SO easy that you don’t even need them. One thing I do want to tell you is wait for each color to dry completely before moving onto the next step- that goes for each animal. 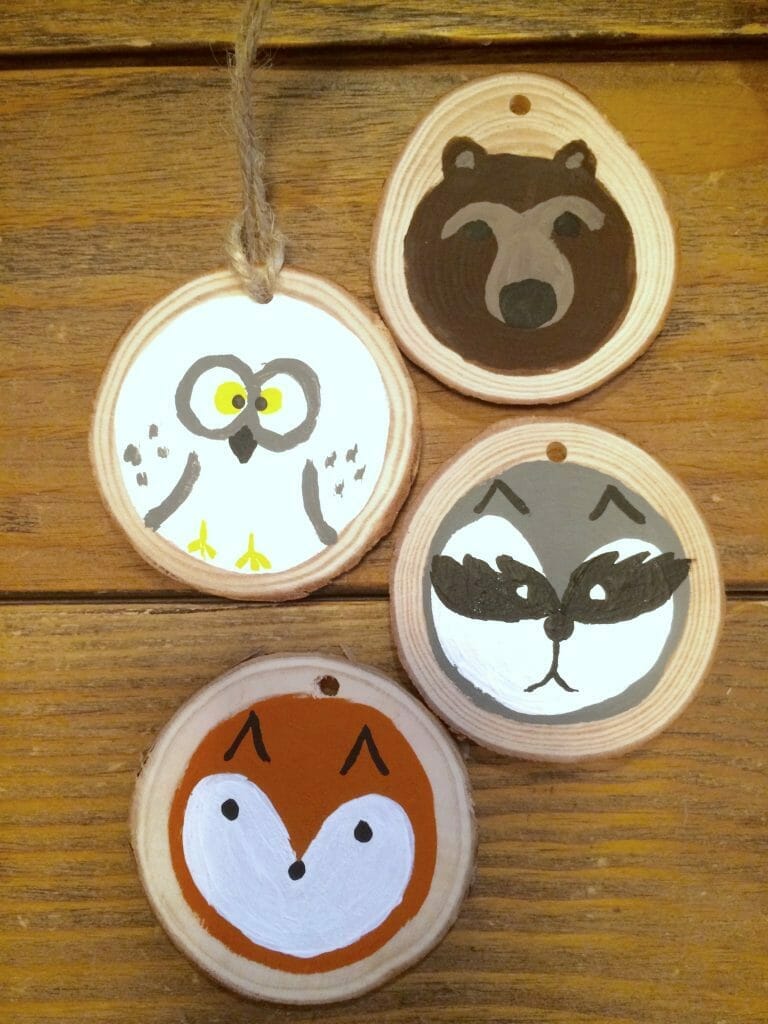 As you can see, all of these started off with painting one big circle in the color of the animal onto the disc.  Emmy painted a couple with me and she preferred to paint all the way to the edge, but I prefer the border…. personal choice!

The fox, and raccoon begin the same way, with a rounded heart shape in white on top of the colored circle. Both also get little black triangle ears painted on the top.

For the raccoon, A black nose and mouth, as well as a furry black mask are painted on top of the white rounded heart.  After that dries, use the non-brush end of your paintbrush to dot white eyes onto the mask. 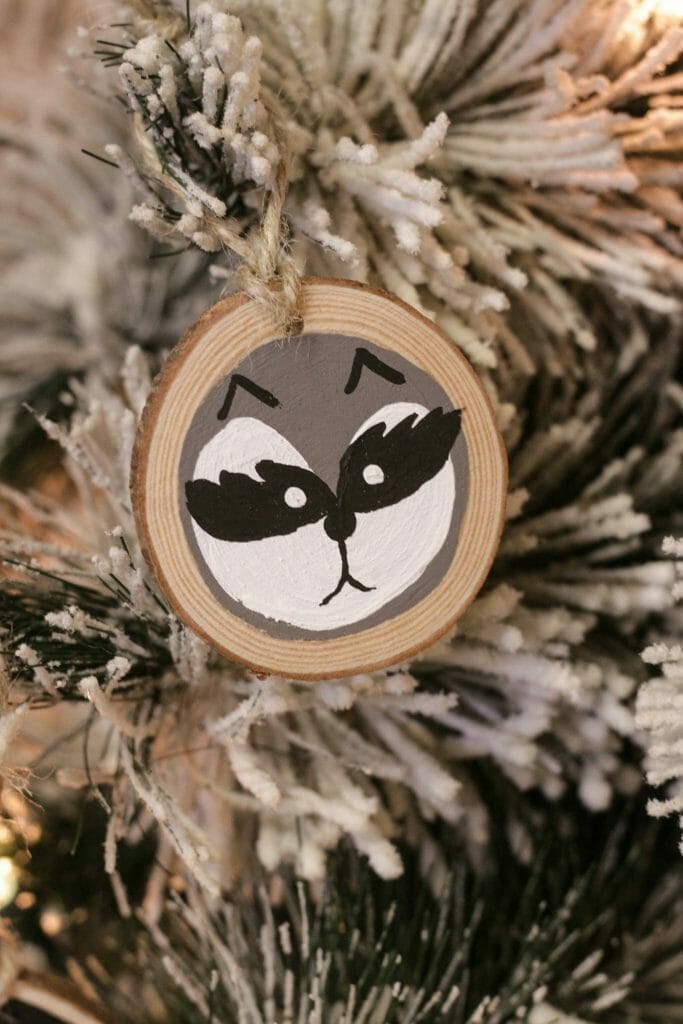 The fox is probably one of the easiest, and he was by far the most popular at Sweet Clover as they all sold.  For the fox, after adding the rounded heart and black triangle ears, simply dot the end of your paintbrush in the black paint and add a black  nose, and two black eyes.  Boom.  Done. 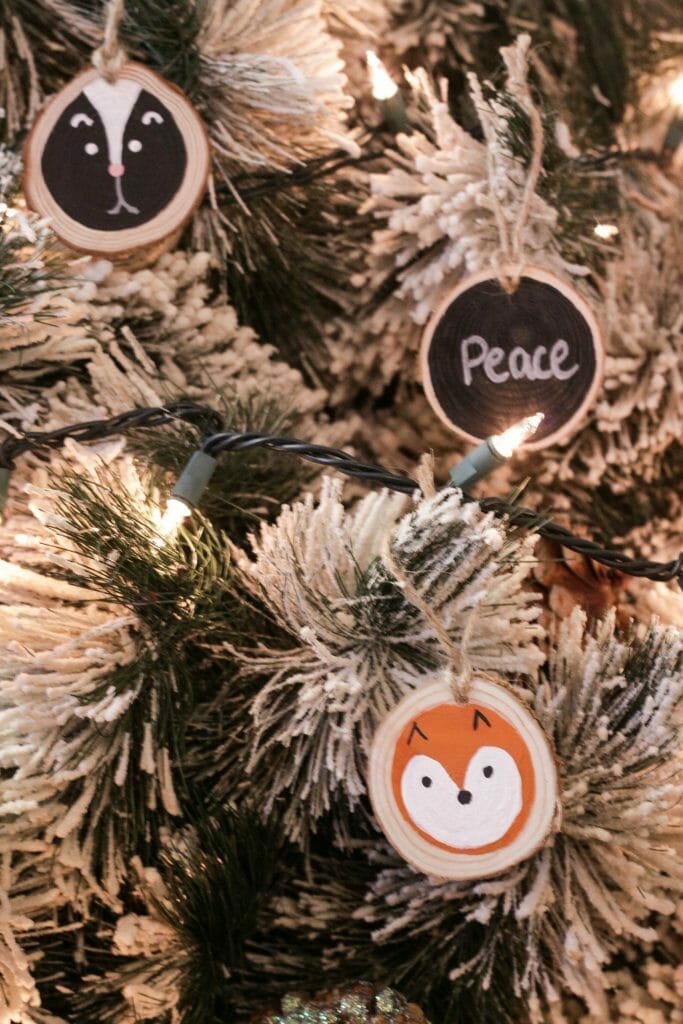 In the photo above, you can also see the skunk, which Emmy and I adore, but apparently no one else does. 😉  Once his black circle was painted and dried, I used white to paint a stripe on his forehead, which widened as it got closer to the top.  White “C” shaped curves were added for ears, white dotted eyes, a gray mouth, and a little pink dotted nose.  Isn’t he cute?  I guess no one likes skunks. 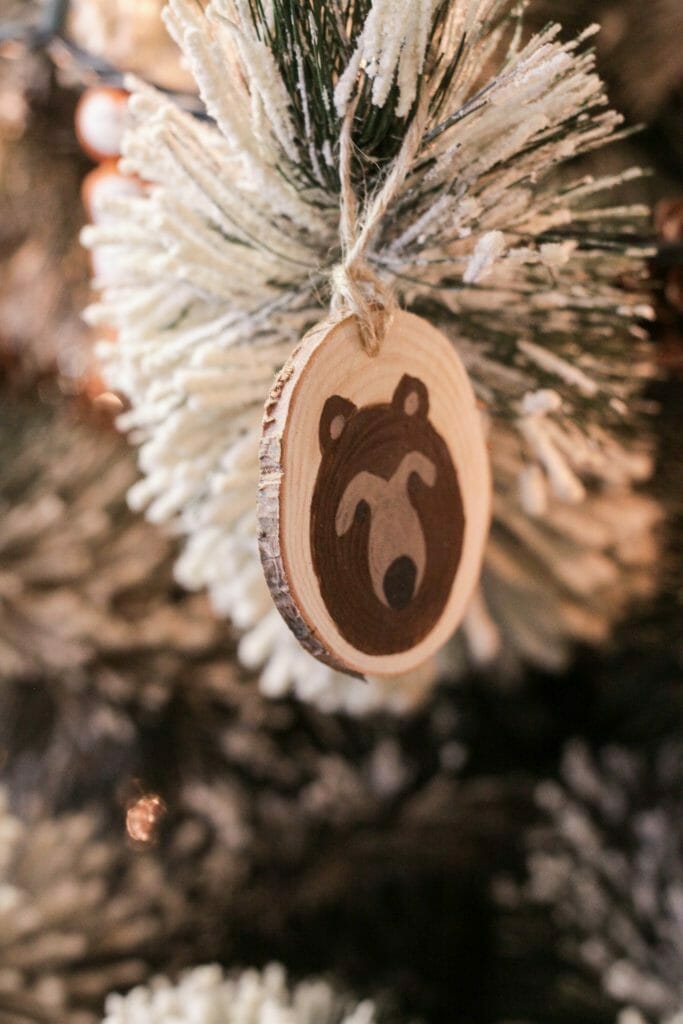 For the bear, I created his face a little differently, as I felt his ears looked best on the outside of his circle face.  I painted my dark brown circle and added larger “C” shaped ears to the top of his head.  I mixed brown and white paint to create a softer brown or beige, and painted a long nose that lead up to the forehead, giving his eye sockets some definition.  The beige section is almost like a downward facing fish.  I also added some of the beige inside of his ears.  Finally, I used black to paint  black eyes in the space I created for them as well as a large black nose on the end of his beige snout.  The bear’s nose is much larger than the other animals which seemed appropriate.

I saved the snow owl for last because he’s definitely the most unique as the wood slice features his entire body rather than just his face. He was also a popular seller. 🙂 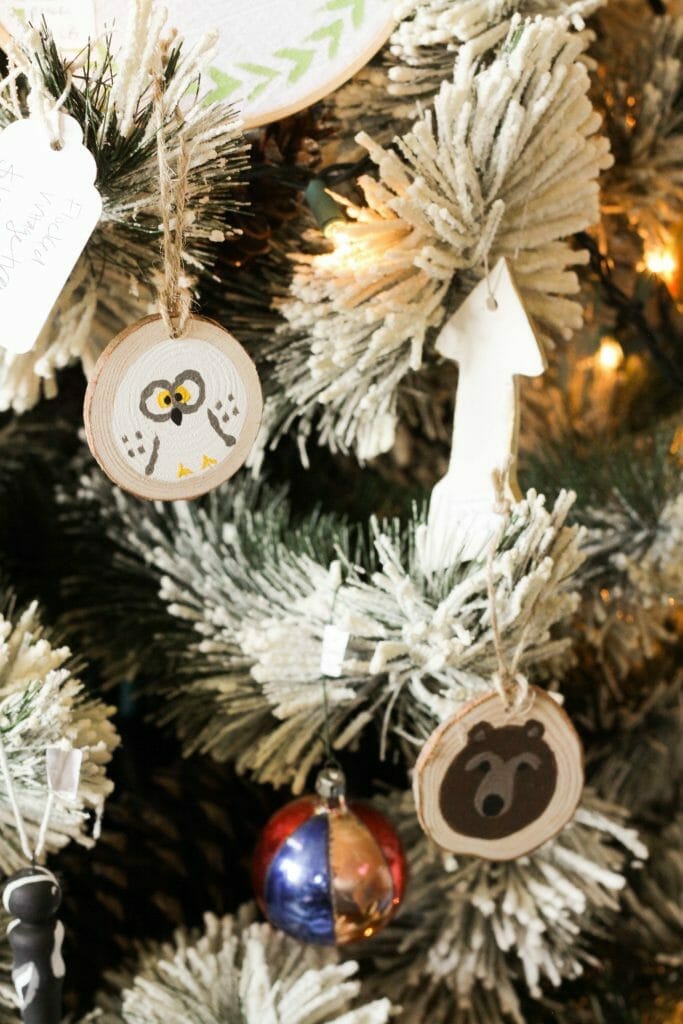 Sidenote- I couldn’t find my best artist brush so this guy isn’t as neat as I would’ve liked.  Anyhow, to paint him, I started with a couple coats of a large white circle  Next I used gray to add lines for wings, two circles touching each other for eyes, and a few little spots on his wings.  Next I used yellow to paint little lines for his feet, and smaller yellow circles inside the gray ones, both on the interior section of the eye.  Finally, black was used to paint a little triangle shaped beak, and two little dots on the yellow of his eyes. That’s it!  Super easy! 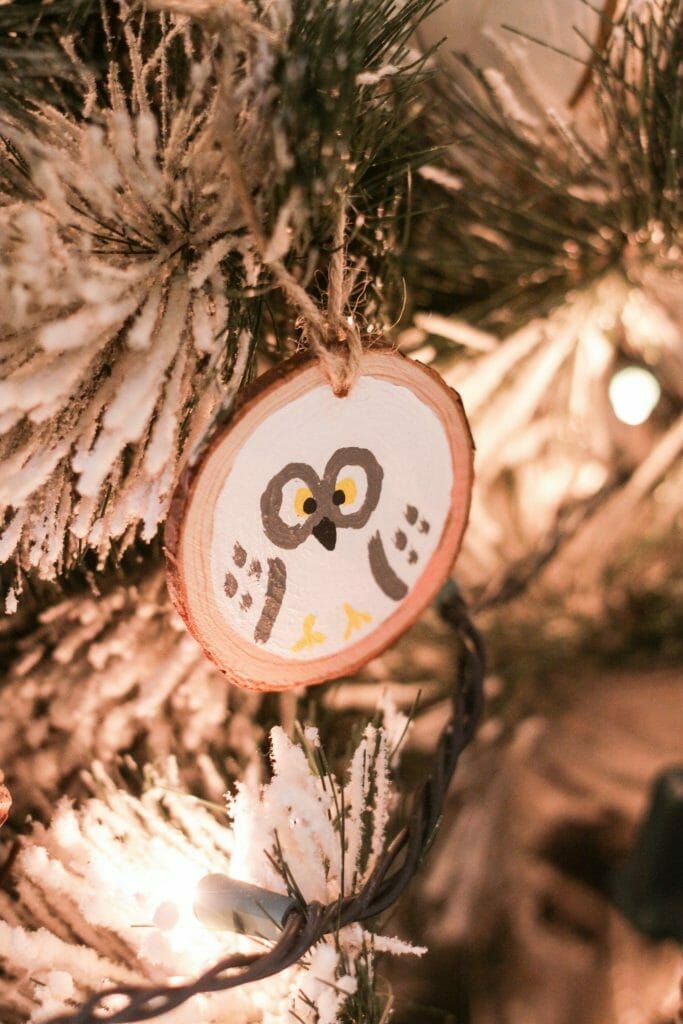 As I mentioned in the beginning of this post, no talent is needed; these guys are all truly easy for painters of all levels.  I hope you will try them out!  I just love the rustic and whimsical touch they add to a tree. 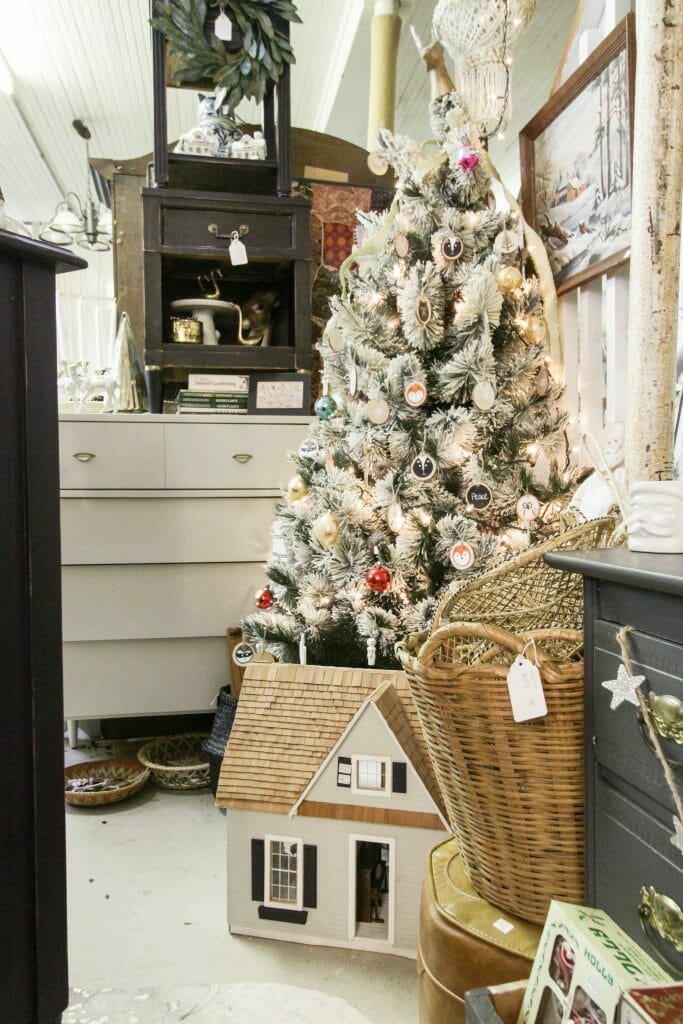 Have you created any of your own ornaments this year?  What are you crafting for the holidays?