Good Monday morning!  We survived a crazy weekend of soccer and the school play, and I am one proud mama.  My girl nailed it as Tweedle Dee.  I think the most rewarding thing as a mother is watching that glow your child gets when they are doing something they love.  Soccer for Sawyer, creative arts for Emmy.  Anyhow, I digress… you’re here to learn about my DIY rope stair railing.  Last week in my One Room Challenge update, I shared photos, but today I am going to tell you exactly how I did it. 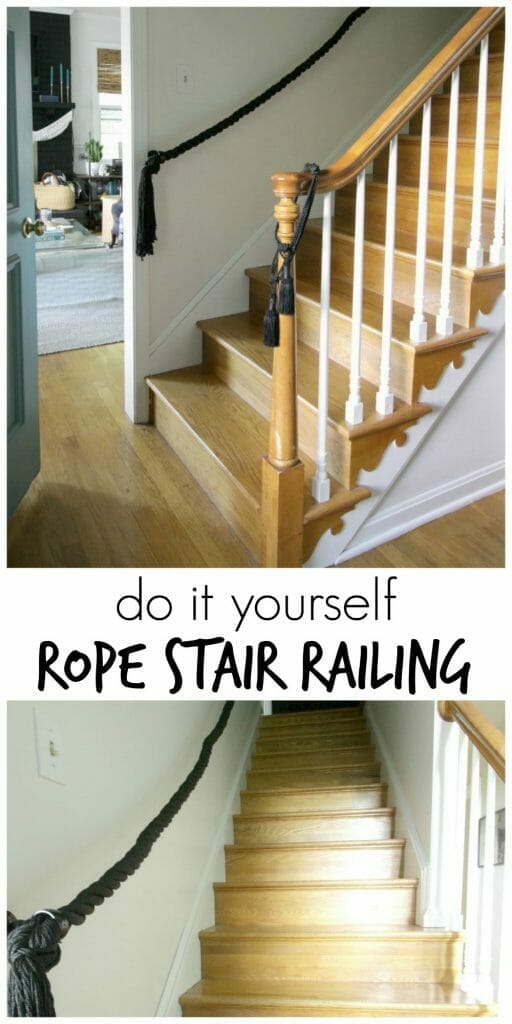 There’s really not a lot out there that I could find on rope railings aside from on websites that sell the products you need.  My inspiration originally came from a UK source that I was unable to order from so I had to keep digging.  I knew I wanted a black rope, and simple hardware.  I kept searching and came across Knot & Rope Supply.  I had not heard of them, but took a chance and ordered my hardware from them, and it was delivered carefully packaged in the matter of a couple days.  If I repeat this project again, I’d definitely use them. (This post is in no way sponsored or in collaboration with them, but I love to share great companies when I find them.)  They also sell the rope needed in a variety of colors, but I thought I would search Amazon to see what I might find and I’ll get into that in a bit, too.   Here is the official list of supplies:

I chose to use 3 brackets up the length of my staircase, but for a shorter case you may only need a couple.  Bear in mind that 1.5″ rope is much heavier than you might imagine.  Trust me on that one!  Because the rope is really heavy, and you will  have people pulling on your railing as they ascend the staircase, it’s important to make sure your brackets are securely mounted into studs in your wall.  Logically, I know that studs are always around door frames, so I chose to mount my two end brackets directly next to doorways that happened to be placed at either end.  Each end has a wooden railing on the opposite side, and I used the height of the top of that railing to place my opposing bracket at the same height.  below you can see how the bottom bracket aligns with the wooden railing. 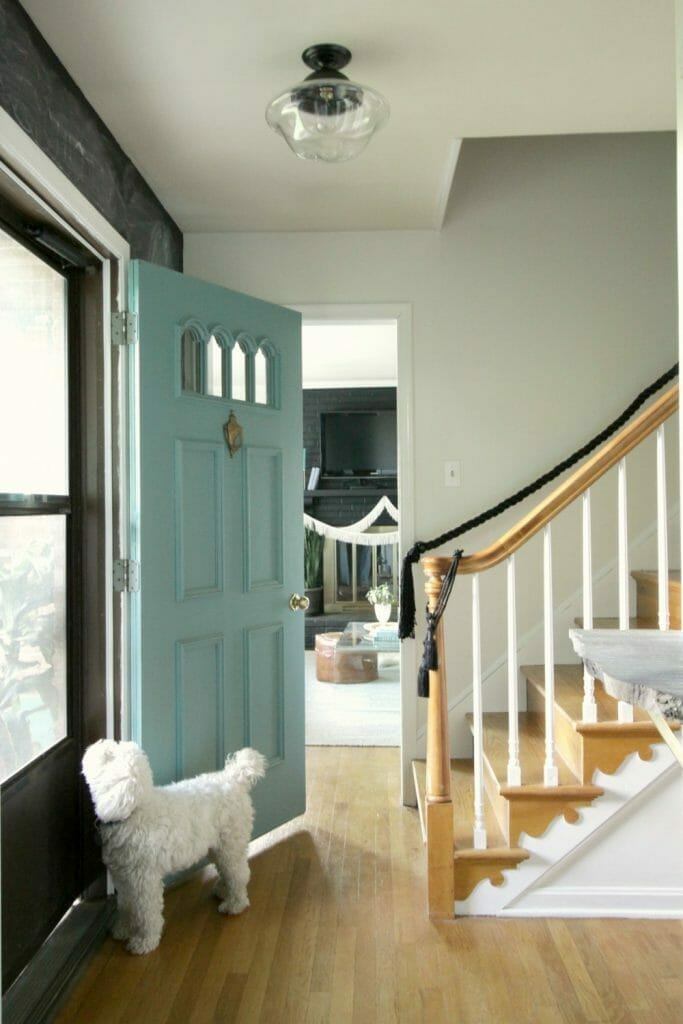 Placing the two ends was easy, and each bracket is held into the wall with 4 provided screws.  Finding the placement for the center bracket was more challenging.  I used my tape measure to find the straight distance between my two end brackets.  As it turned out, there was no stud exactly where I needed it. (This is why many railings are mounted onto a piece of wood and then mounted to the wall on that piece of wood, but I wanted to avoid that as I’m not a fan.)

Fortunately, or perhaps not so fortunately, our house has age to it, and I can clearly see a line dividing the floors of our home.  That line mean there was a solid beam there! 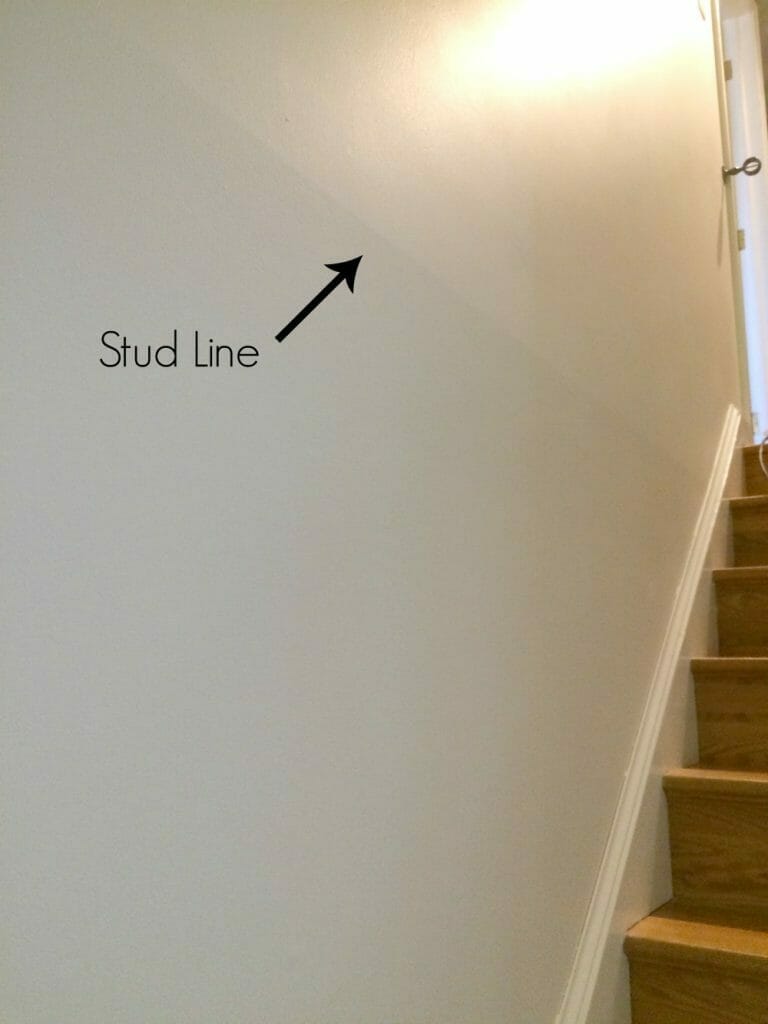 I had to shift my bracket an inch or two from the actual center point to use that stud, but I would rather have a perfectly safe and sturdy railing that’s off by an inch than one that pulls out of the wall and takes some drywall with it.

I used my tape measure to create a straight line from end to end, found the center, and then moved up the line until my stud line intersected with my tape measure line, and that is where I mounted my middle bracket. 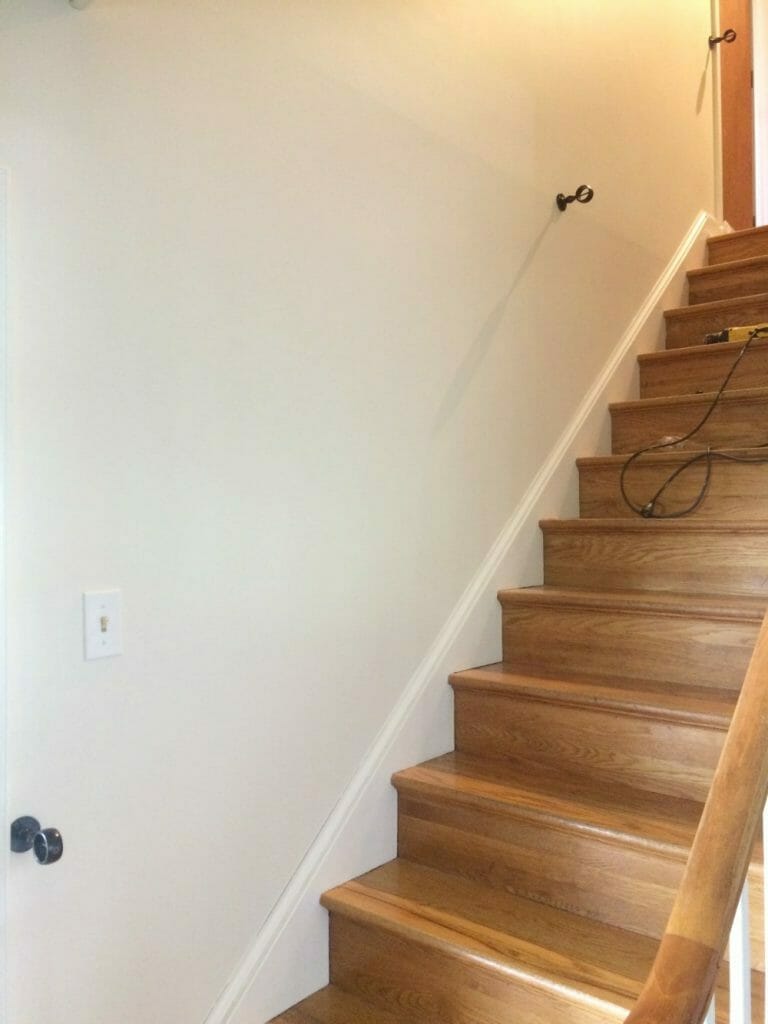 Once the brackets were up, it was time for rope!  Be sure to remove the center screw that runs through each bracket hole before moving on to rope so that your brackets are ready, and keep those screws and screwdriver handy.

Because I purchased a fitness rope that was sealed with rubber on the ends, I thought I’d be able to just slide it through.  WRONG!  The rubber made it a little too thick to slide through my bracket.  I had to cut the end off in order to get it through the bracket.  Bear in mind, this rope is thick.  I wasn’t sure how I was going to cut it.  I grabbed my jig saw, thinking I would saw right through it…. nope!  That just tore it up and didn’t cur so smoothly.  I thought a bit more, then grabbed a cutting board, sharpened my butcher’s knife, and placed the end of the rope on my cutting board.  And here is an honest picture of where I was working and all of the crazy tools I tried! 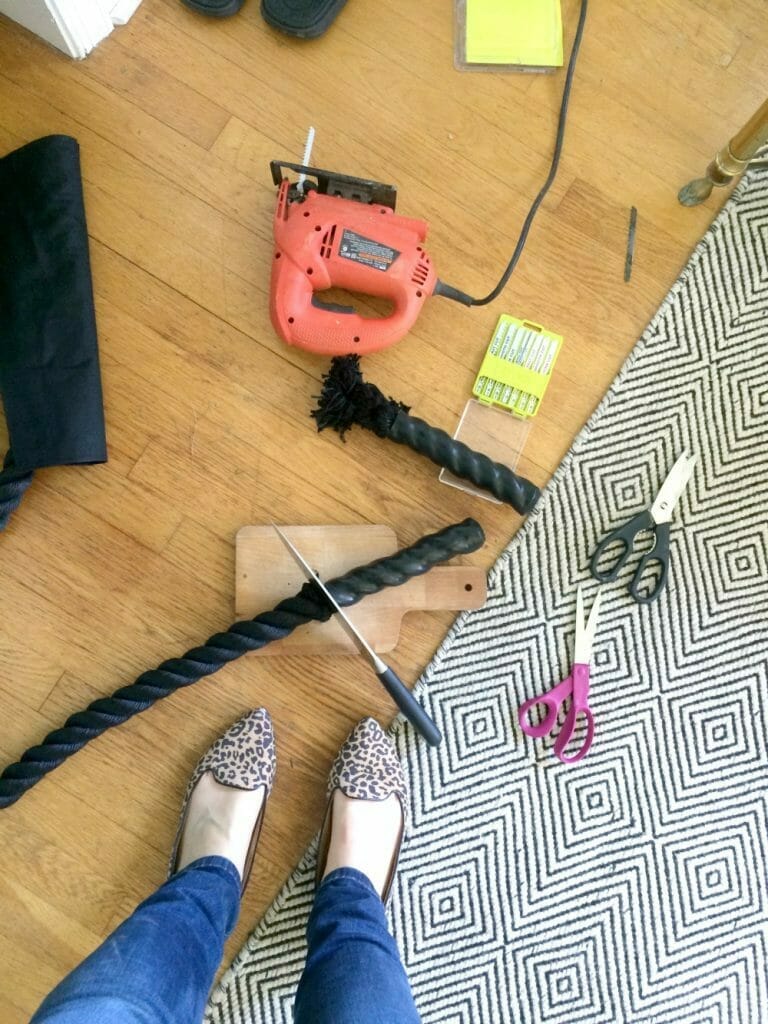 The butcher’s knife took some time and muscle but it provided me with the cleanest cut.  One thing I was not aware of though is that as soon as the end is cut, this rope will just start to unravel.  It’s three sections of strands woven together, and they just started coming undone.  Quickly, I took the end to the bottom bracket and pushed it through.  My original plan  had been to create a knot at each end, but when I saw the huge tassel look this unraveling achieved, I loved it.  I used the provided screw to secure my rope into place. 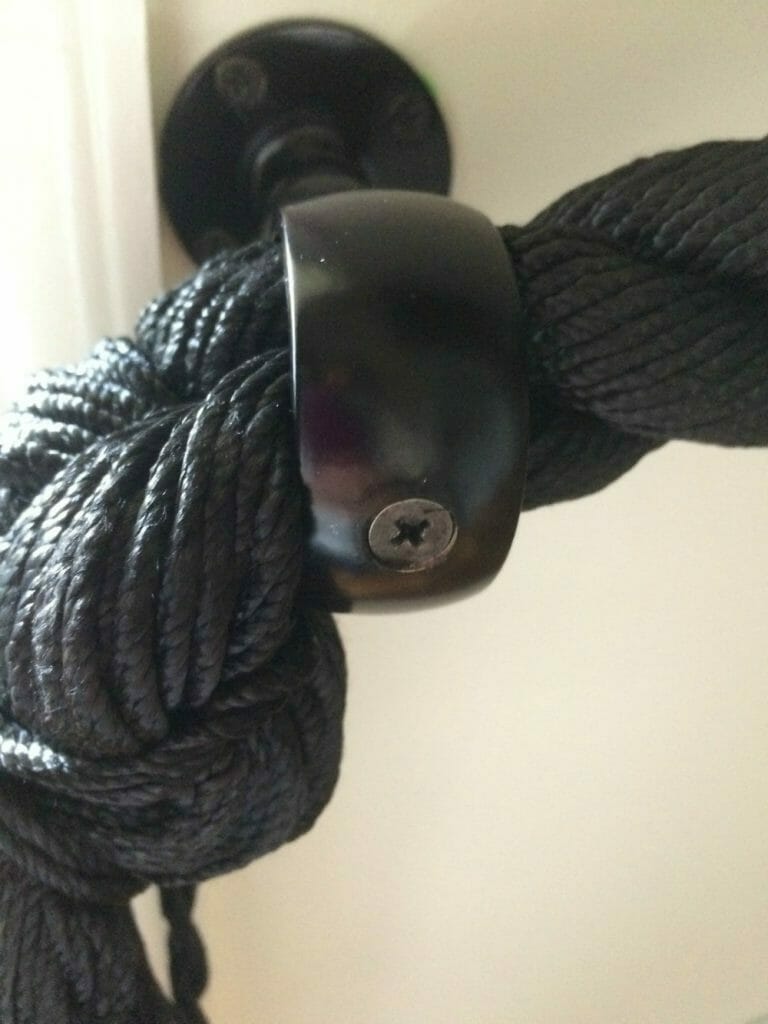 Once my rope was secure, I decided to create the look of a large tassel. I divided all of my strands into two and tied them in a knot.  Then I grabbed a couple strands from both sections and wrapped them around the knot, tying them in a secure knot of their own in the back of the tassel so that knot would be less visible.  The final effect was that of a huge tassel. 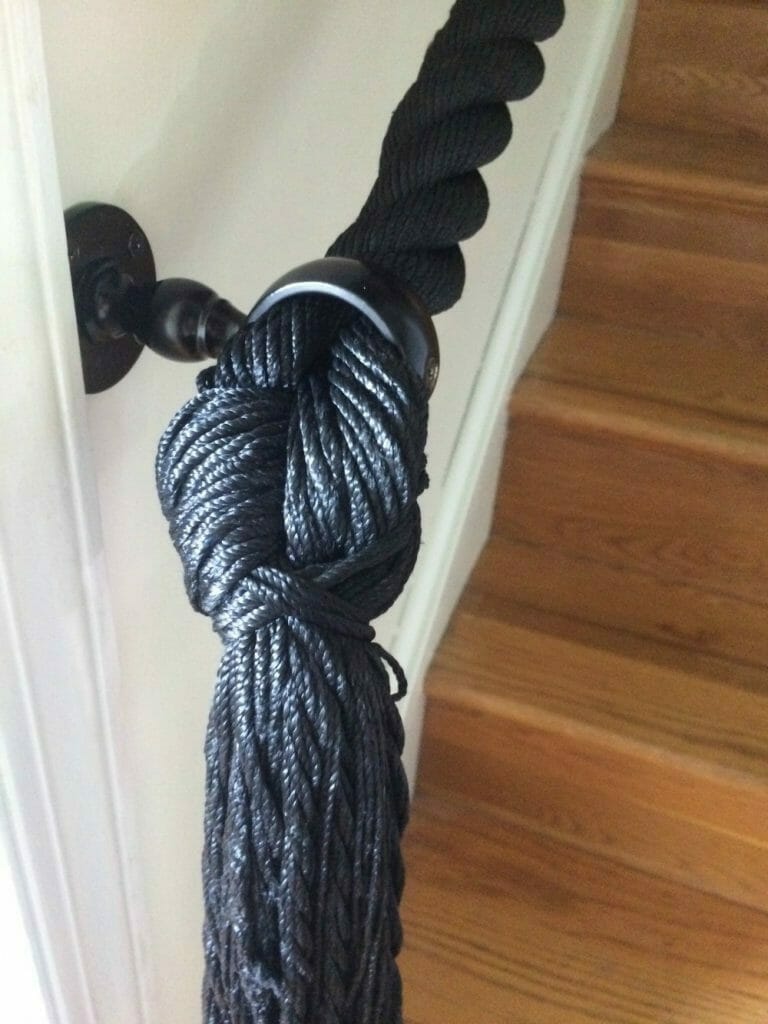 After this end was secured into place, I cut the other end of my rope (I had bought about double the length I needed… I highly recommend buying extra length to account for any errors, swag in the rope, or unraveling).  I held onto it securely after cutting so that it would not unravel.  I brought it through my middle bracket and then tied the end in a knot so that it would not unravel while I worked on the second bracket.  At the middle bracket I pulled it somewhat taut from the first bracket, allowing a little bit of give for movement.  Once I had it placed exactly where I wanted it, I used the bracket center screw to secure it in place.

Now, at this point, you might be wondering why gloves were on my supply list.  I did not use gloves, so I am doing you a solid here, my friends.  As I pushed the rope through the brackets, and kept moving and securing, I found myself with a bit of rug burn on my hands.  It wasn’t terrible, but I recommend using gloves.  Let my mistake remain my mistake.  OK, let’s move on past my stupidity.

Finally, I was at the last bracket.  I untied the knot at the end, once again slipped the rope through, pulled it as tight as I wanted, and secured into place.  At this point, I had a significant  amount of rope left.  I tied it off to prevent unraveling, and brought my butcher’s knife and cutting board upstairs.  I rested the rope on the board, and went to work cutting away.  I used my scissors to trim the end I was left with and repeated the tassel knot technique I used on the first end.  Once both ends were tied in their tassel knots, I used my scissors to trim them so they appeared to be even. 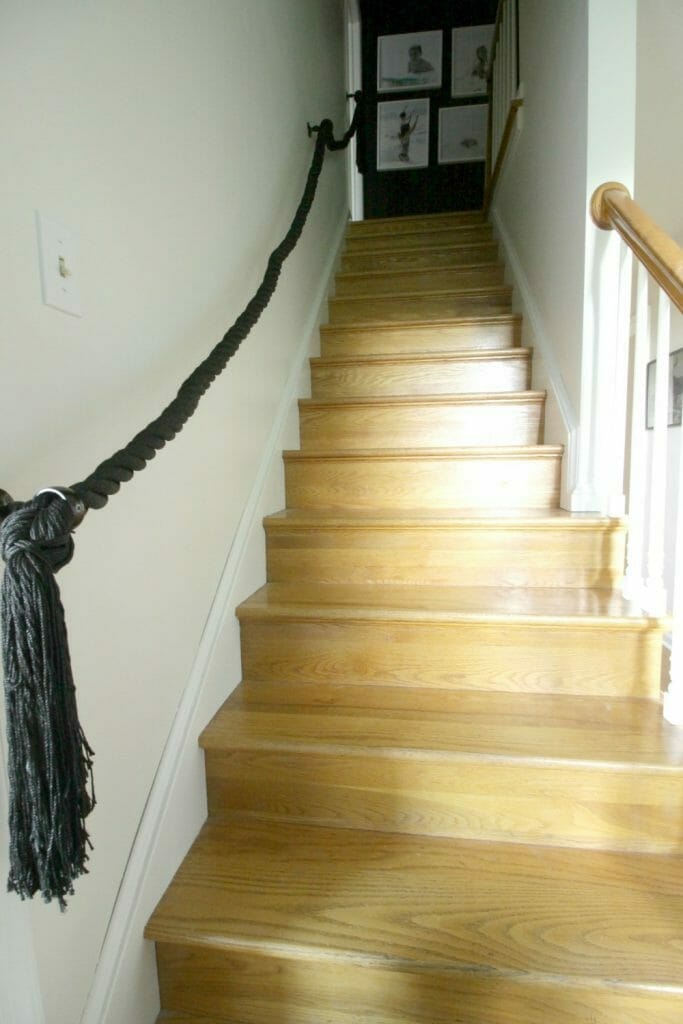 Lastly, after putting away all of my supplies, and sweeping up all of the trimmed tassel ends, I gave the railing a good yank near each bracket as well as in the midpoints between brackets to make sure it was secure.  Then I ran up and down the stairs shouting “Yippee!!!! It worked!” and proceeded to take phone photos and send them to Chris, my mom, my friend, my neighbor, and anyone else who might be excited for me. 😉

In all seriousness, this project took under 2 hours, only cost me around $115, and makes a huge impact aesthetically as well as structurally.  I couldn’t be happier with the outcome.  My dogs only wish they were bipedal and had opposable thumbs so they could understand why it’s so exciting. 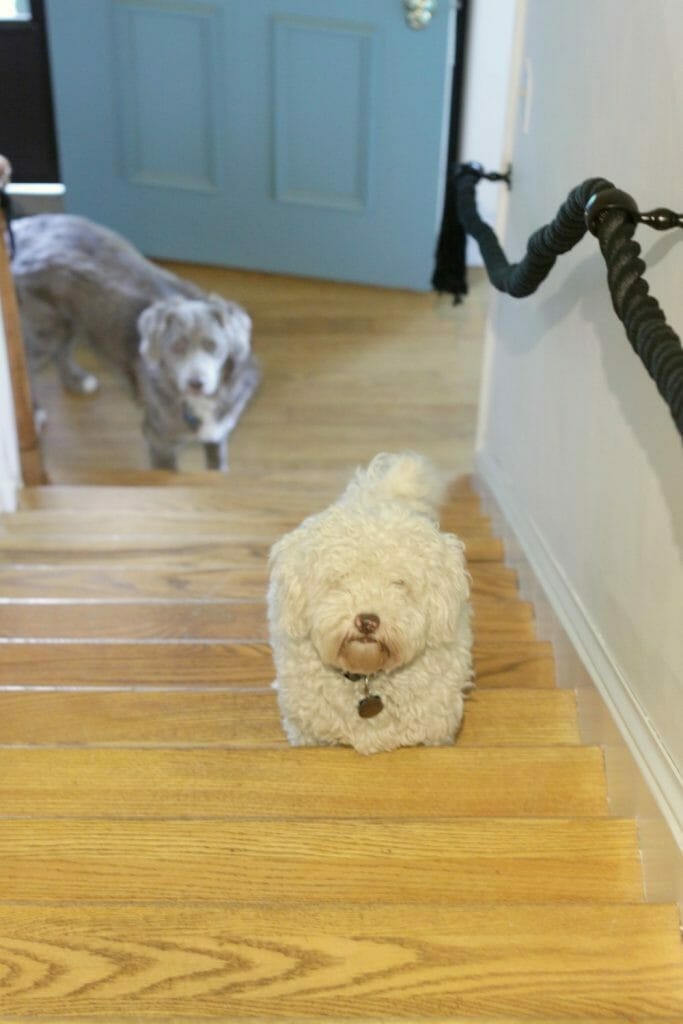 We have one more staircase in our home, and I am seriously considering repeating this project there to make it cohesive throughout the house.

Come back later this week to see the final reveal of our staircase and hallway for the One Room Challenge!