Hi guys!  I hope you all had an awesome holiday weekend and were able to get outside and do the things you love.  We just spent time together as a family watching movies, grilling and eating outside, hanging out by the fire pit, hiking, shopping, and just being together.  One of the highlights was heading out to the last Maryland Poultry Swap of the summer in Sharpsburg, Maryland.  This event is a great venue for finding all sorts of poultry as well as different small farm animals… One of these days I am going to come home with the pet of my childhood dreams, a lop-eared bunny.  They’re just so cute!  Anyone have one?  We went to the swap with plans to get a few more chickens, but we got caught up in the fun of the moment and we doubled our brood!  Where there once were five hens, there now are ten.  I wanted to take a moment to introduce the new members to you. (And don’t worry- tomorrow I will be back with a design-related post!).

Before I show you the new ladies, I want to take a moment to tell you a little bit about the existing crew: Friendly, Patches, Leia, Ray, and Chewy.  We bought five hens, all the same type, from a friend of a friend after our original flock were killed by raccoons. We had no idea what type these were but were just happy to have some free ranging in our yard again; and to be honest I can’t really tell these girls apart as well.  After some “research,” I discovered that these girls are Stars.  They’re extremely friendly with people… they aren’t afraid to approach me at all. 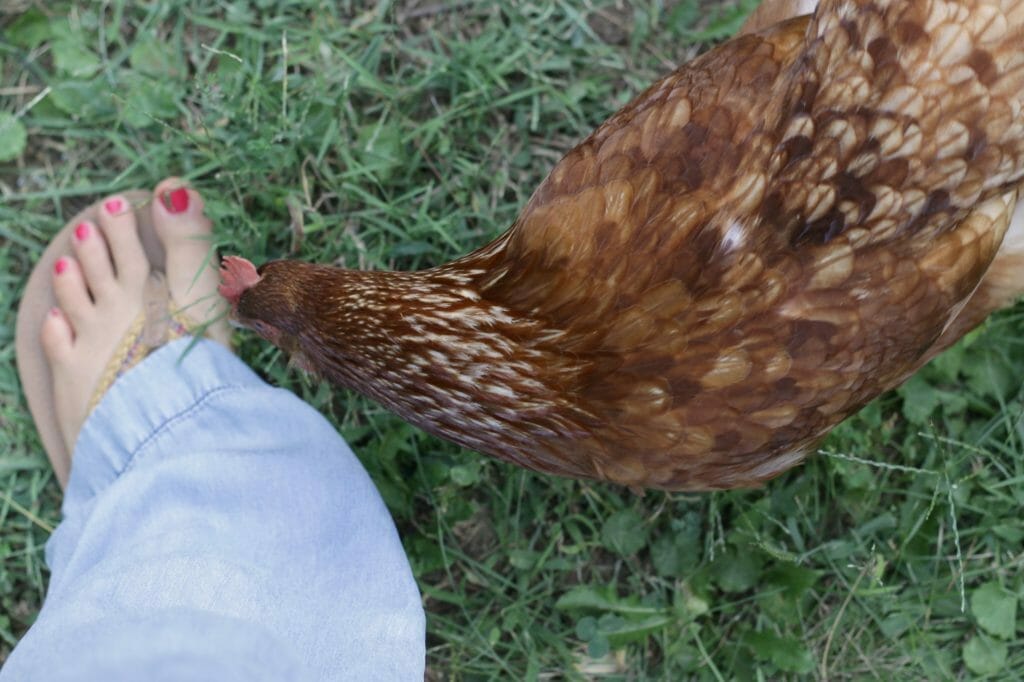 And no, she isn’t about to peck my toes, she just wanted to be where I was standing.  These girls will follow us all over the yard.  When I headed out into the yard to shoot photos of the new crew, these ladies followed me around. 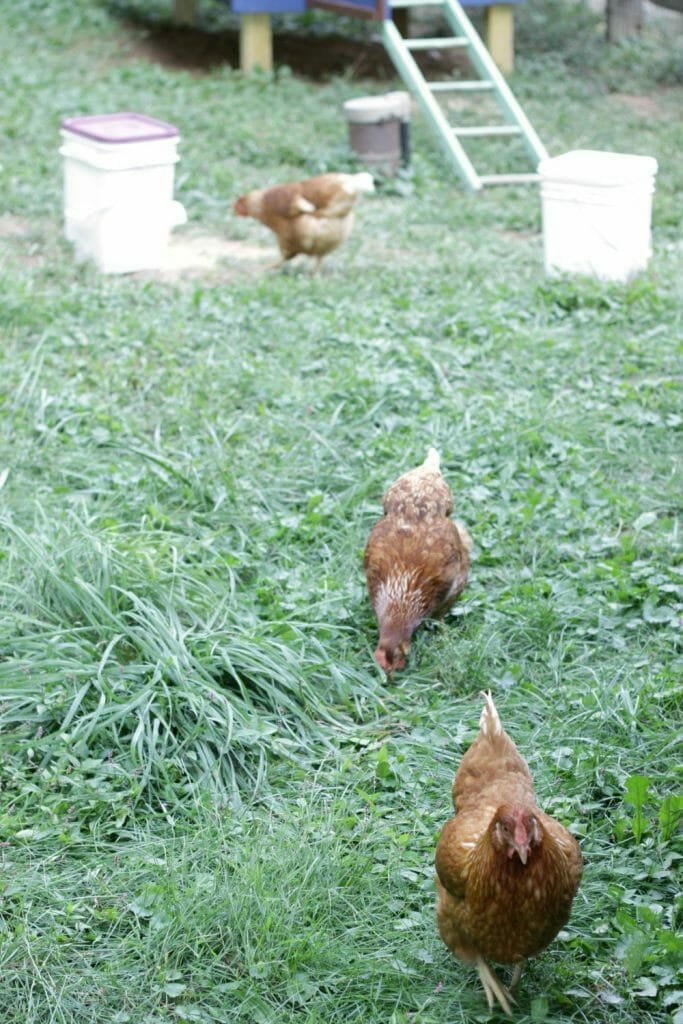 Stars are not supposed to be broody, but we did have one particularly broody hen, ironically named Friendly.  For the last couple of weeks we noticed that we were only getting 4 eggs, so we thought we had one that wasn’t laying.  I had searched the yard for another place she may have been nesting and came up empty.  Well, this past weekend, Chris found Friendly hiding in some brush under our pine trees, and he was able to grab two eggs that were nearby, but knew she was sitting on some.  Later that day, when she had finally left her post, Chris went back out and found a mountain of eggs- fourteen brown eggs, to be exact!  She had been hiding them all from us!  Luckily, we did the float test and all eggs were safe to eat.  (To test an egg place it in a pot of water.  If it floats, it’s no good; but if it sinks, it’s safe to eat.)  At the moment, Friendly is not too happy with us for taking her eggs, and hasn’t been laying any in her special spot.

Speaking of Friendly, here she is chasing the new pullets… 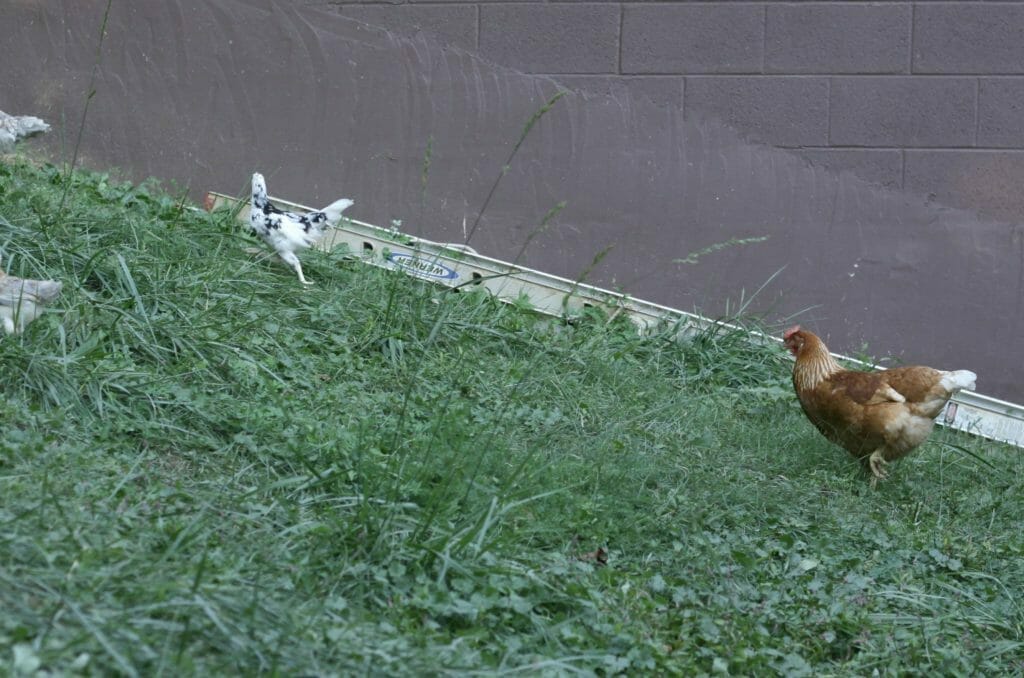 We are thinking she needs to be renamed Unfriendly.  The older established hens have definitely let the new members of the flock know the pecking order.  It’s hard to watch them chase or peck at the little guys, and sometimes we intervene, but it’s all part of the order of nature.

Now, let me introduce our new hens, all of which are young pullets just weeks old.

The very first hen we bought on Saturday morning was a Rhode Island Red.  In our first bunch, we had Vader, a Rhode Island Red who quickly worked her way into our hearts with her sweet demeanor.  Sawyer picked this one out (as he did Vader) and named her Squeaker.  She already loves to have her photo taken, and sat posing for a few minutes.  Squeaker will be laying brown eggs when the time comes. 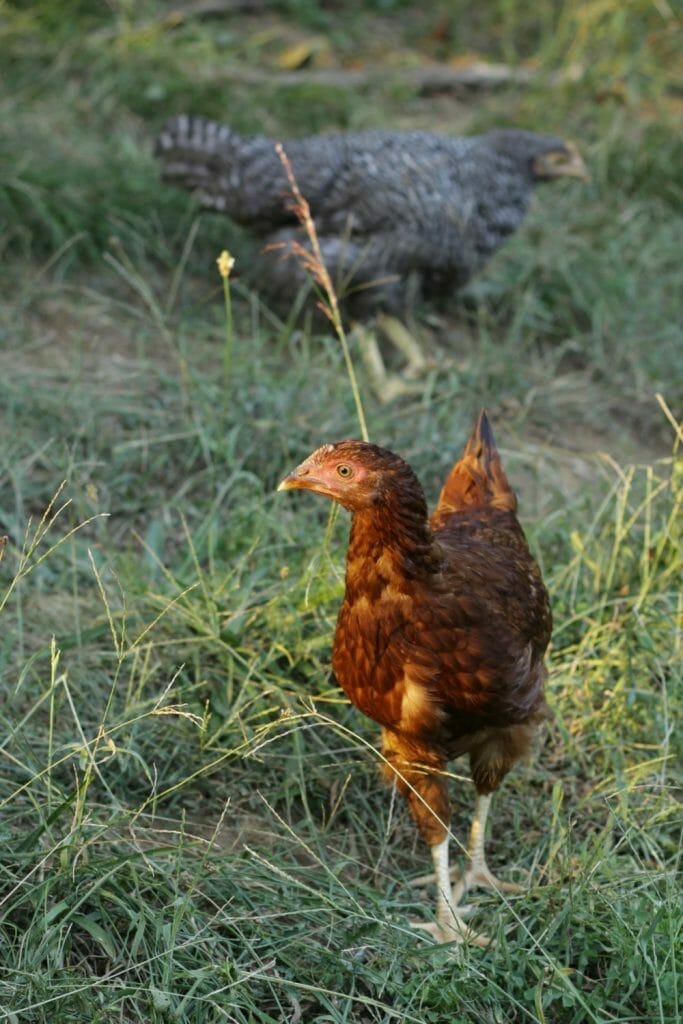 After picking her up, I was on the hunt for a Silkie, an interesting looking bird named for its crazy plumage.  They are not the brightest of chickens, but they are fun to look at nonetheless.  To my dismay, there were not many Silkie hens, but leads of roosters.  We do not want a rooster!

I ended up finding a couple other interesting and beautiful breeds to take home.  First off is this beautiful black and white hen who is a Barred Rock (after Plymouth Rock).  I named her Shakespeare after the most famous bard I know, in a play on the breed name.  Chris and I love to walk into the back yard now and shout, “Wherefore art thou, Shakespeare?” when we look for her. 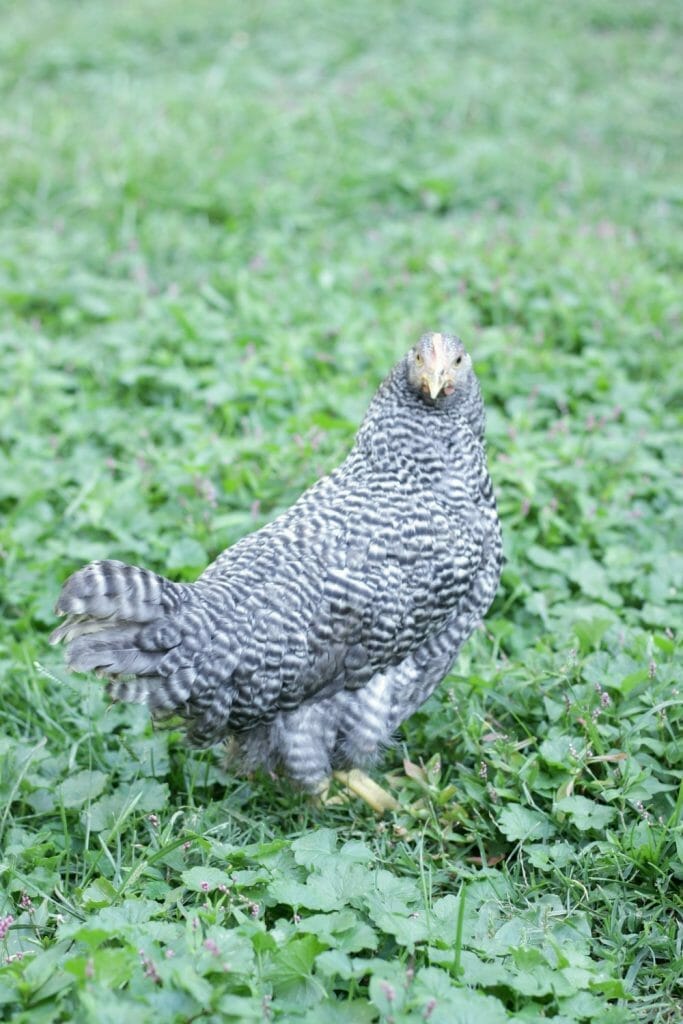 This soft gray and tan beauty is a Swedish Flower, and their feathers are truly graphic and resemble a beautiful bloom and come in an array of colors.  Chris named her Mowgli, simple because we were going to watch The Jungle Book that evening.  I am not sure it suits her well, but it’s her name, and that’s what I get for letting him name one!  She will lay pale brown to cream colored eggs. 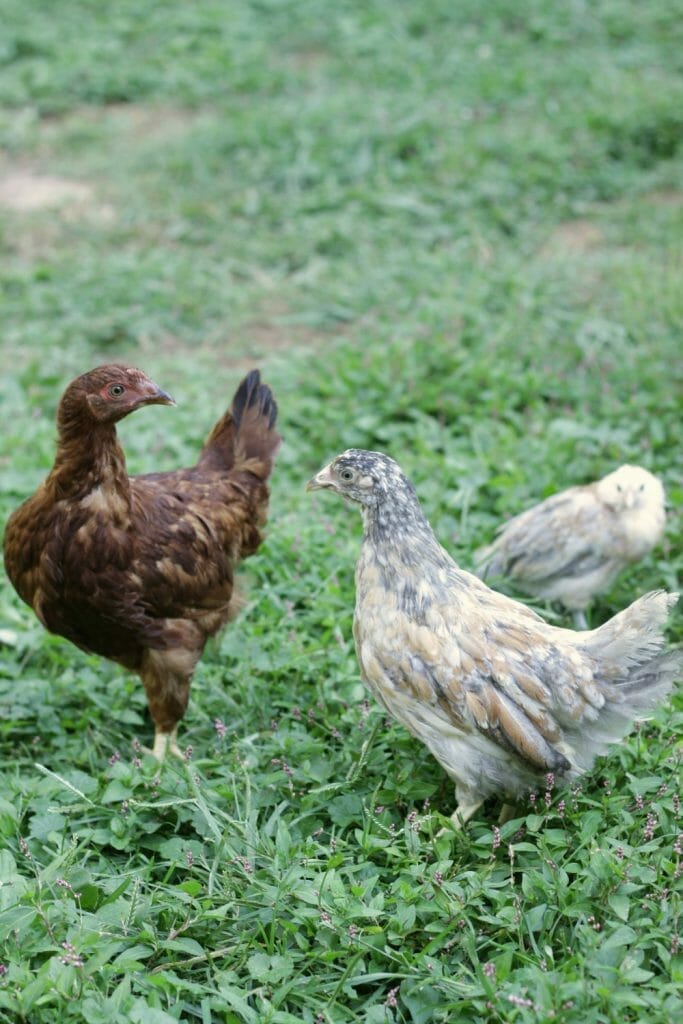 This black and white girl is an Exchequer Leghorn that Sawyer selected.  He named her Sparkles.  I have no comment.  She will be our only hen who lays white eggs. 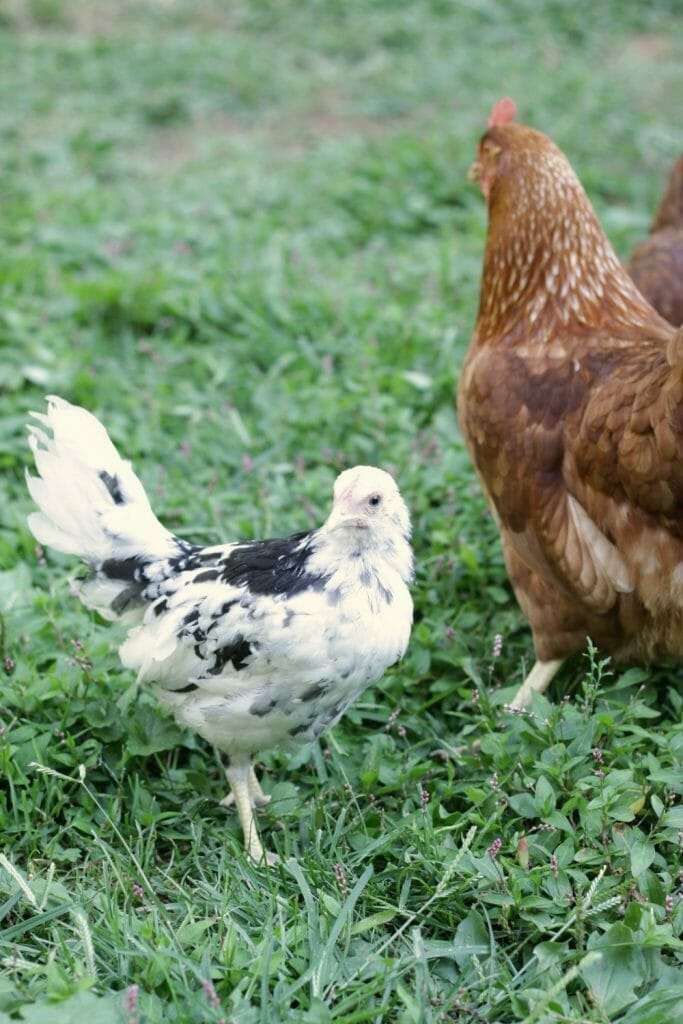 Now I saved the best for last…. Emmy’s pick of the day.  Emmy selected the smallest of the Wheaton Americaunas, which are beautiful tan birds that lay blue eggs. 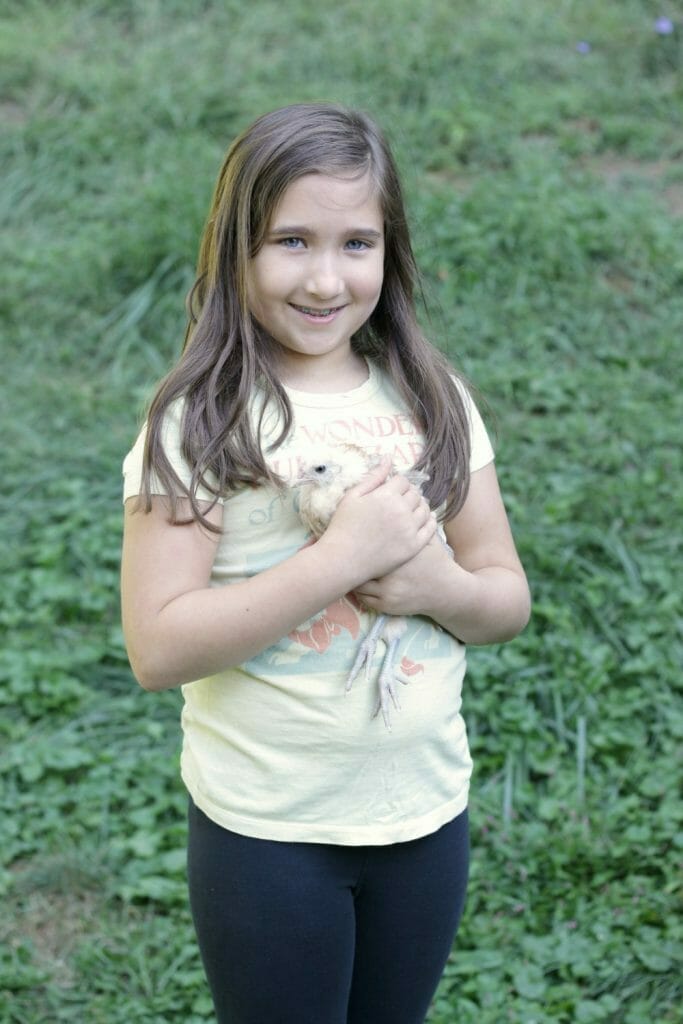 She named her little girl Sweetie, and is very protective of her.  But Seriously, isn’t she the cutest? When Emmy held her for the first time, all I could think of was Elmyra and the squirrel! 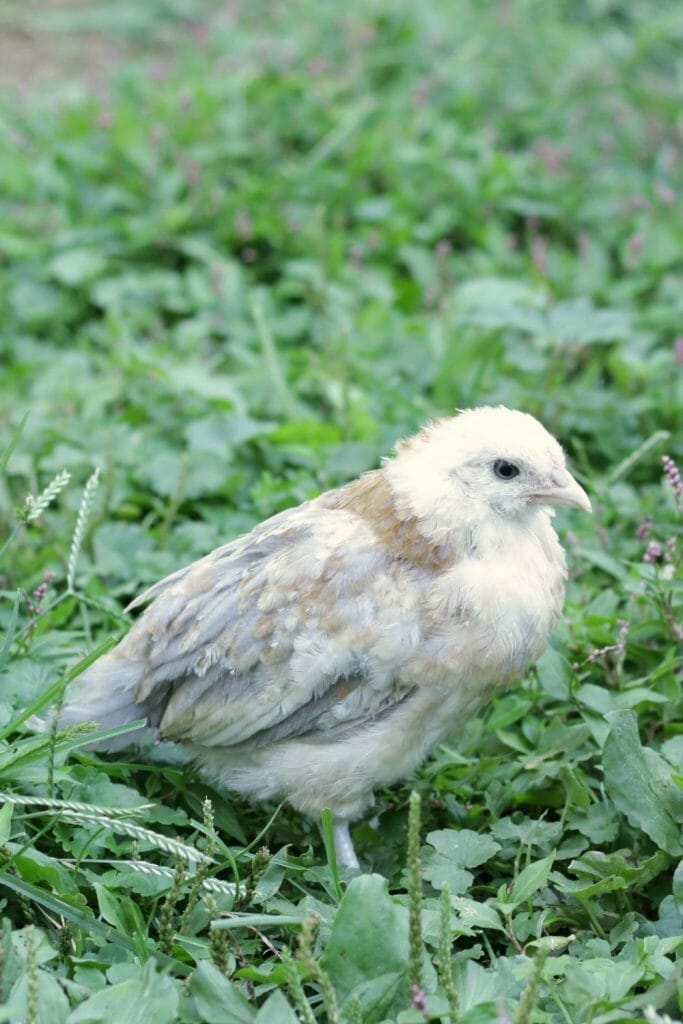 The new hens seem to be finding their groove by sticking together.  These three are the smallest and they tend to travel as a group. 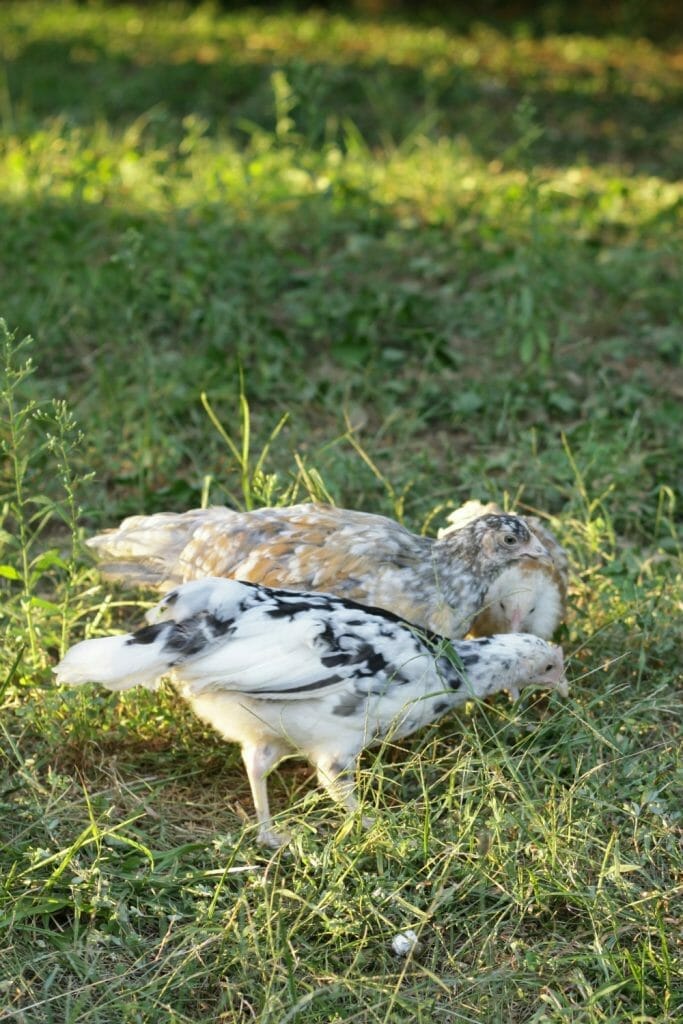 And they even eat as a group. 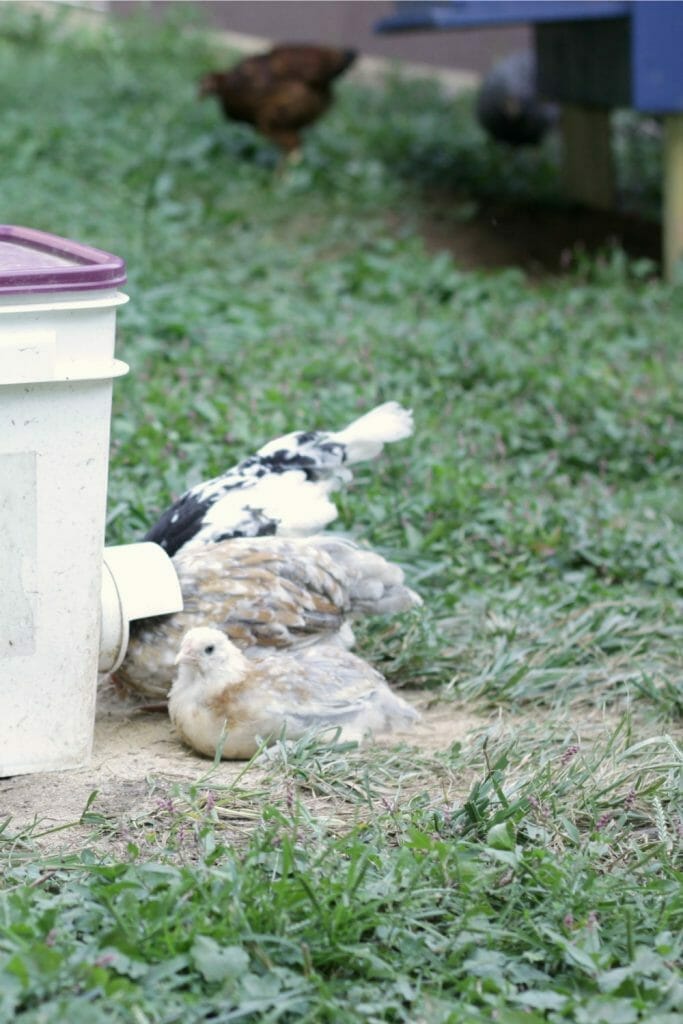 I had some fun yesterday with my sidekick putting these photos together for you, so I thought I would show you a couple of outtakes.  Emmy joined me in the yard, and I handed her my old camera. 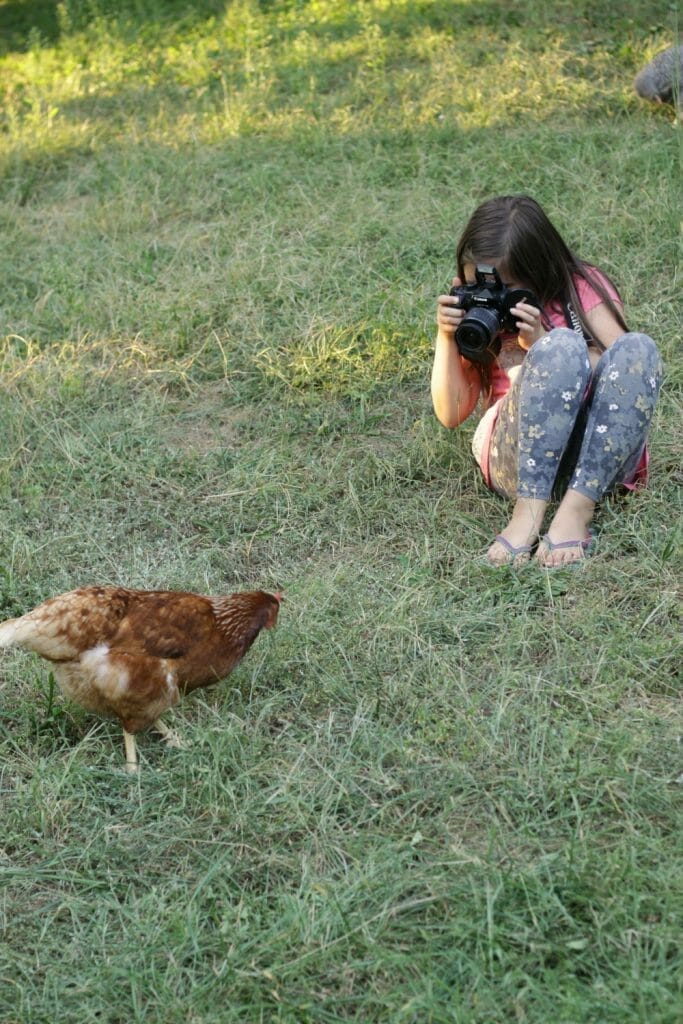 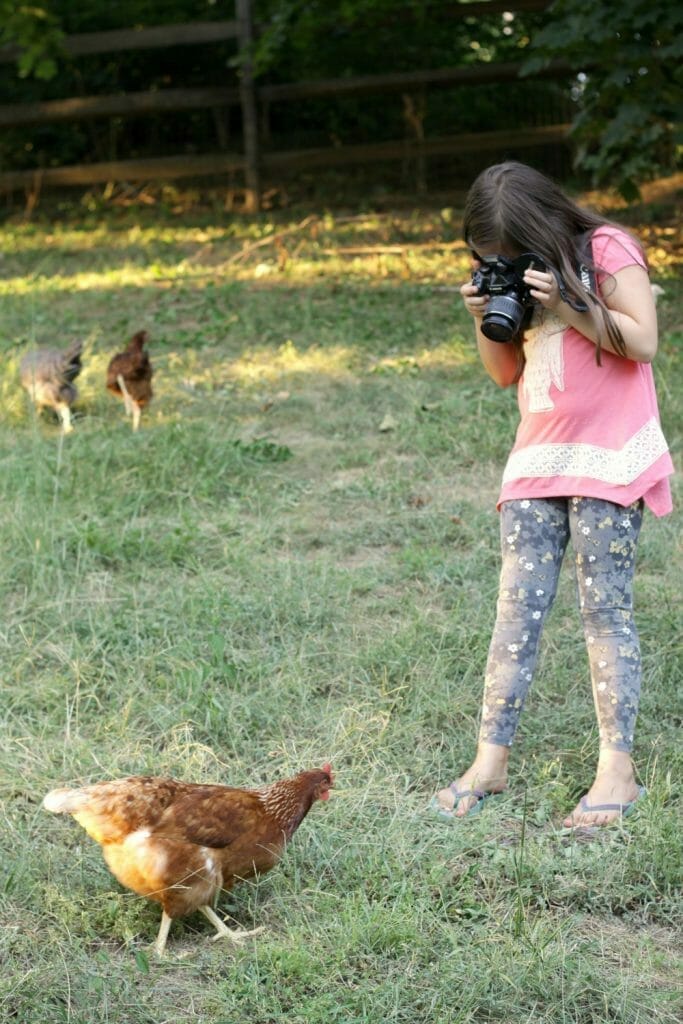 Tomorrow we’ll upload them and see how they turned out!

I have to say that even though it’s only been a couple months, raising chickens is so much more enjoyable and interesting than I imagined.  I love learning about different breeds, and watching their personalities develop.  It’s also been a great learning experience for our family.  And, I might add, breakfast is better than ever.