Lately I am finally finding my mojo and getting things done!  Last week I learned how to change light fixtures out and then proceeded to change 6.  Game changer, I tell you!  I’ll be sharing all of those updates soon.  Today I want to talk a little more about the master bedroom which has had some small updates lately.  Back in January I made a list of some of the things I wanted to accomplish in this space, and funnily enough this idea came to me after posting that, so it wasn’t on that original list.  I love to make to-do lists and then ignore them completely. Just ask Chris.  😉  That being said, today I am going to share with you a simple update to our master bedroom, easy DIY photo ledges. 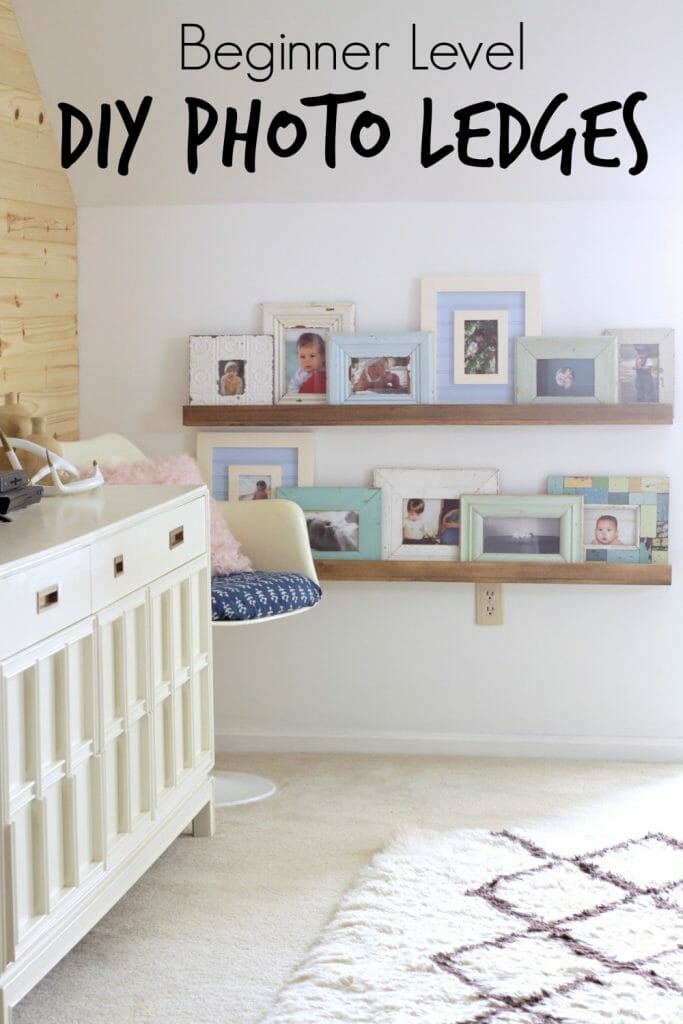 On the left side of our bedroom, we have a long wall broken up by a dormer window.  In the dormer window I created a simple DIY desk, to the right of that on the wall I hung a vintage accordion rack for storage, and to the left of it I was left with an awkward blank wall.  Because of the Cape Cod angle of the roof it’s a little low to hang artwork, so I was stuck, unsure what to do.  This photo from back in January shows you the blank space I am referring to.  I do enjoy having some white space, but it felt imbalanced with the other side, and that bugged me. 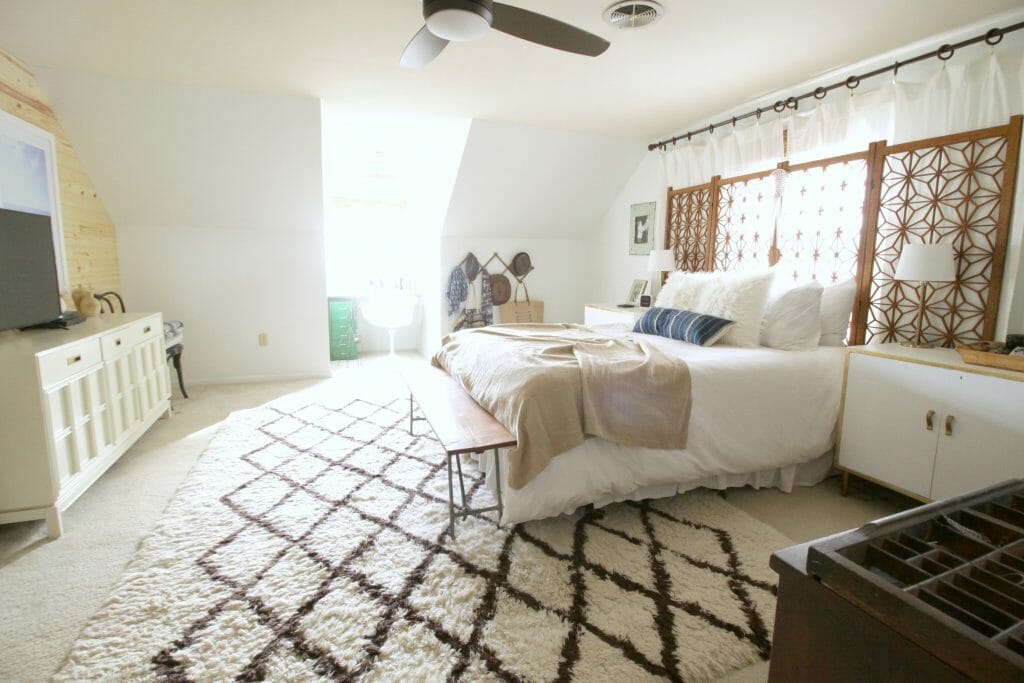 It finally dawned on me that simple photo ledges where I could display family photos would balance it and allow me a place to display and change photos out easily.  Here’s the same view of the room now, with those ledges. 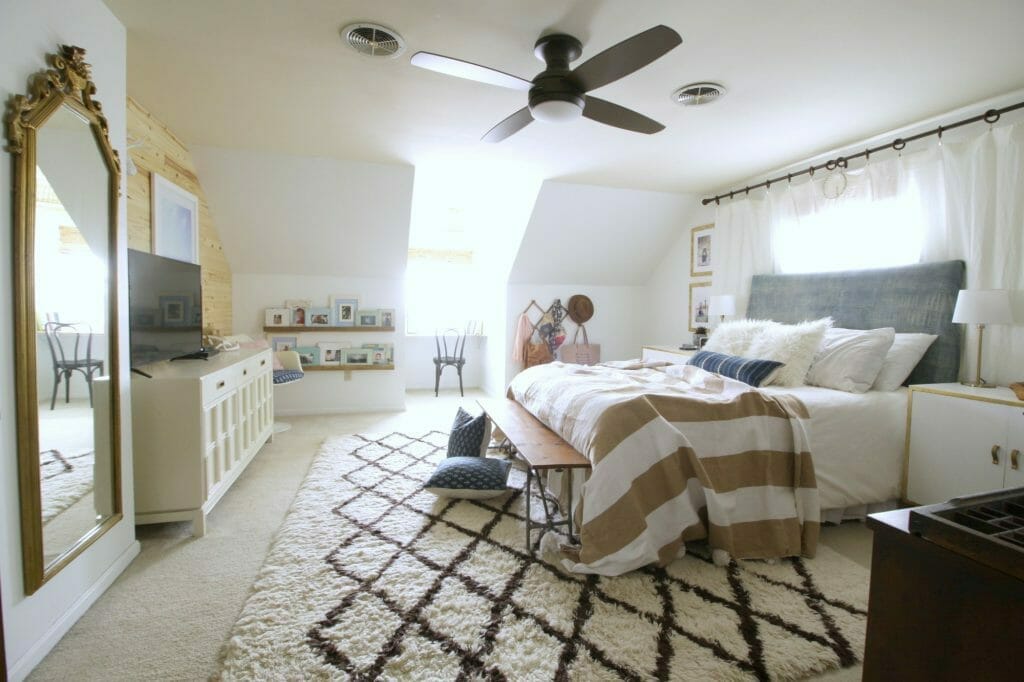 The balance is SOOOO much better to my eyes, don’t you think? 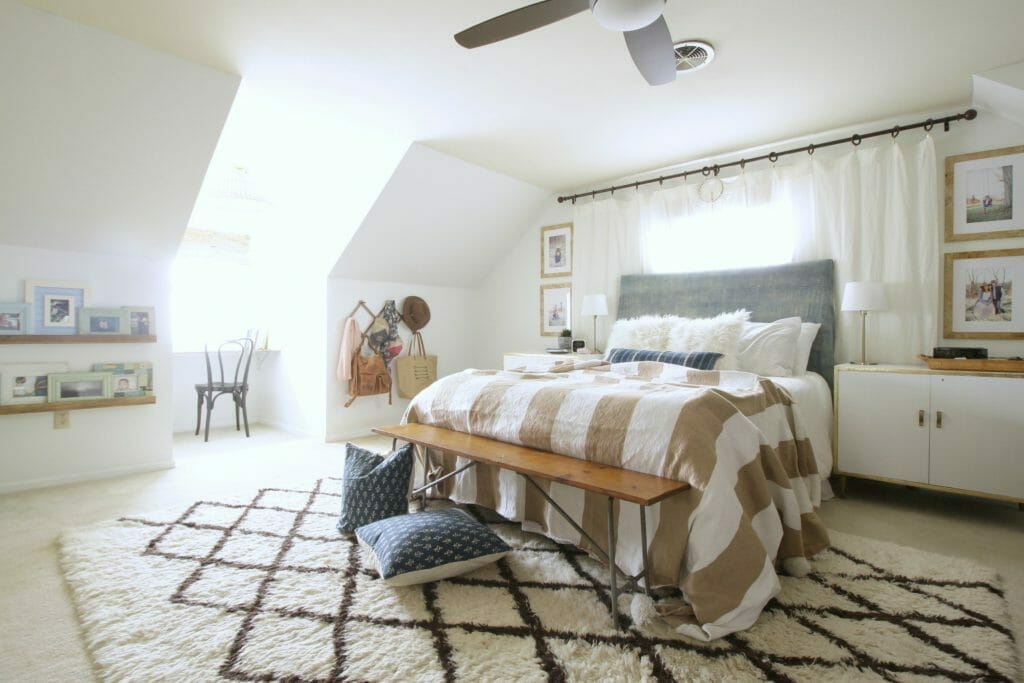 As of now, I used framed photos that I already had on hand in an eclectic mix of blues and greens. 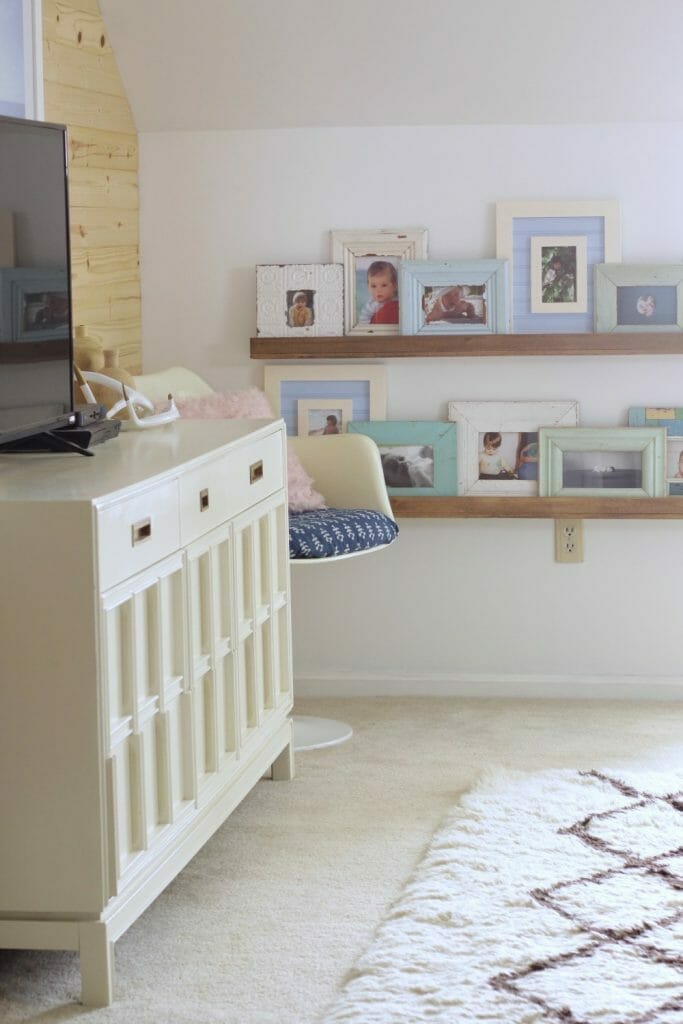 I actually bought most of these frames when we lived in our last house.  I ordered them from a shop called Fragment Freaks on ebay but they are no longer in business it appears.  Some were made with antique ceiling tiles, and some with old painted moldings.  I did find a shop on etsy called Recycled Relics that makes very similar frames in case you are interested. 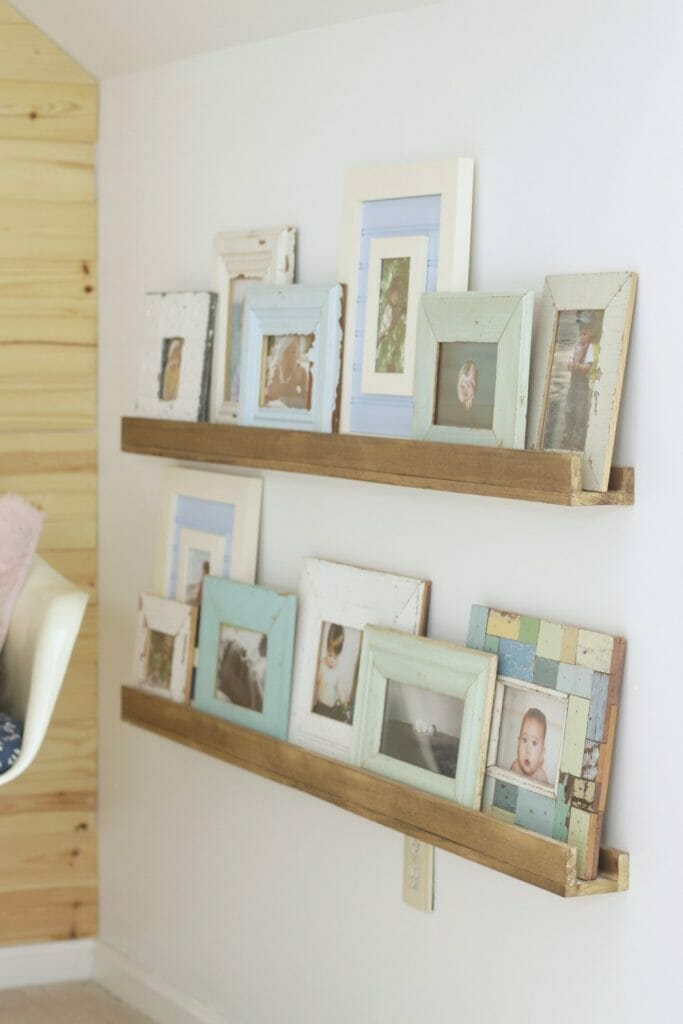 Now let’s get to the DIY tutorial portion of this post.  I promise you that this is the easiest DIY ever… my kids could have made these ledges, and that’s no exaggeration! To make one ledge you will need the following supplies.

I purchased my boards at Home Depot and was pleased that the polar boards came in a precut 4 foot version… that way I didn’t have to make any cuts as that size worked well for me.   If you do need cuts made, generally the people at Home Depot are happy to do it for you at no cost. (I use this service often because I trust them more than myself sometimes!) 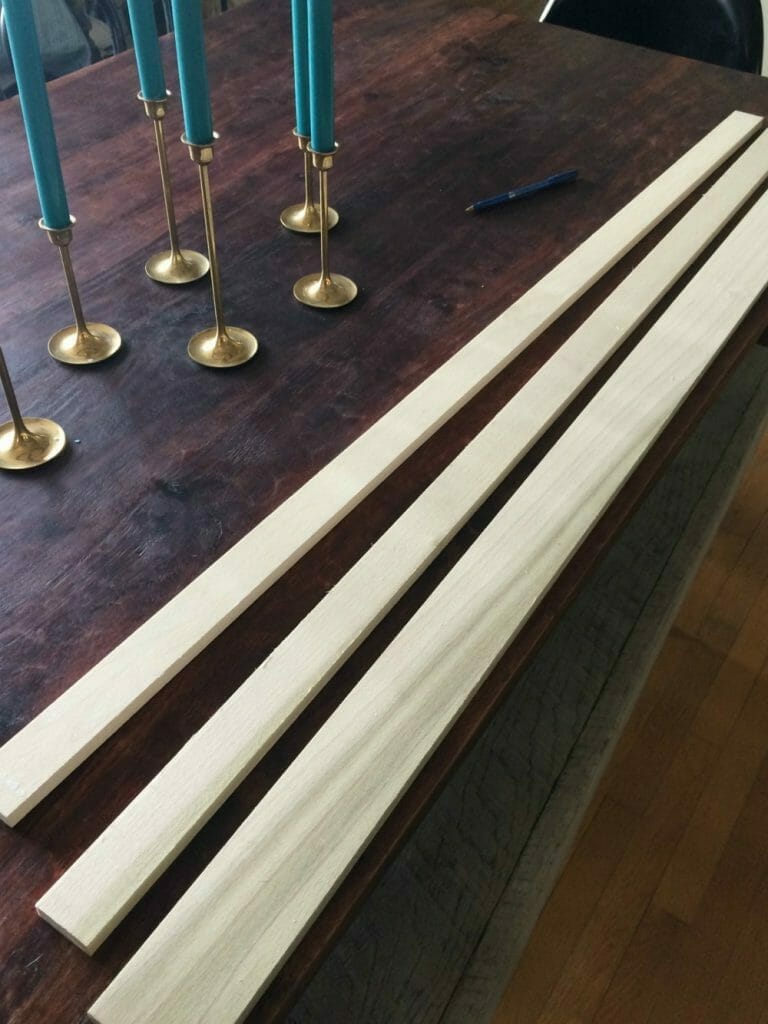 Once I had the boards, I placed them how I wanted them to go together. 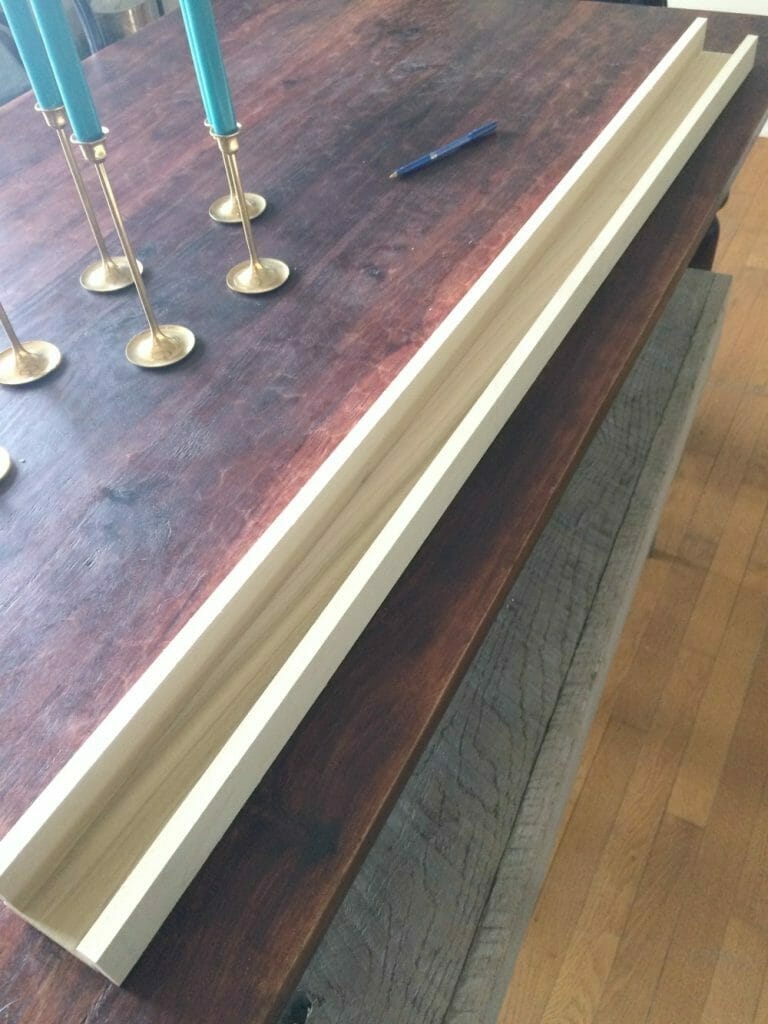 I then drilled pilot holes with a 5/64″ bit, along each joint in 3 places… 1 at each end )1.5″ in from edge) and 1 in the center.  The arrows below indicate approximately where I drilled and the direction. 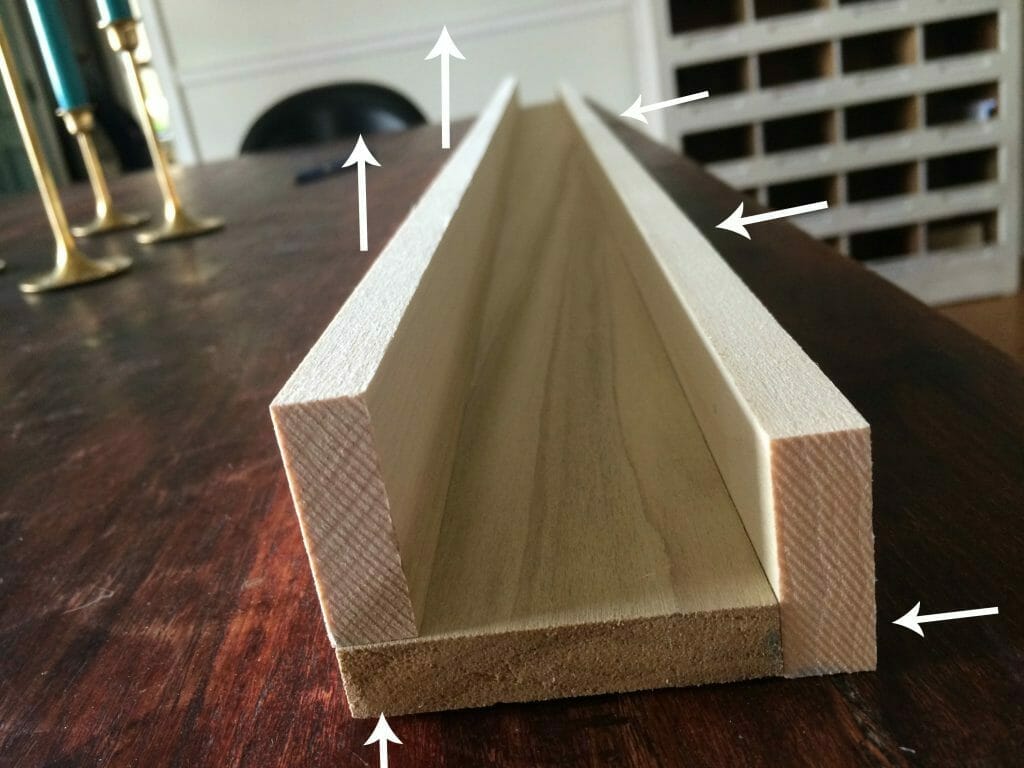 Next, I used a phillips head bit to place my screws into the pilot holes, which connected all of the pieces.  Don’t worry if your screw heads don’t look perfect because you won’t see them once you hand the ledge.  Once they were both put together, I used a rag and applied Minwax Aged Oak gel stain… because I generally really like this stain and color, and it’s what I had in my garage that was still viable.

Once the shelves were dry I was ready to mount them to my wall. Here you can use whatever screws and anchors you have on hand, but I used #8 wood screws.  This is the trickiest part of the entire process… As I said, I don’t always have the best luck with anchors, so I found where the studs were in my wall and marked them.  I then held my first shelf where I wanted it and used the level to make sure it was straight.  I then drew marks on the back of the ledge (the shorter side is what I used as the back so no screws would show) indicating where I needed to place a screw in order to attach to a stud.  I had two points where the ledge would cross a stud, so I drilled holes in the back plate of the shelf at those points, and then added two other holes closer to the ends of the ledge where I would use anchors to mount it to the wall.  Below you can see that the shorter side of the ledge is what is mounted onto the wall. 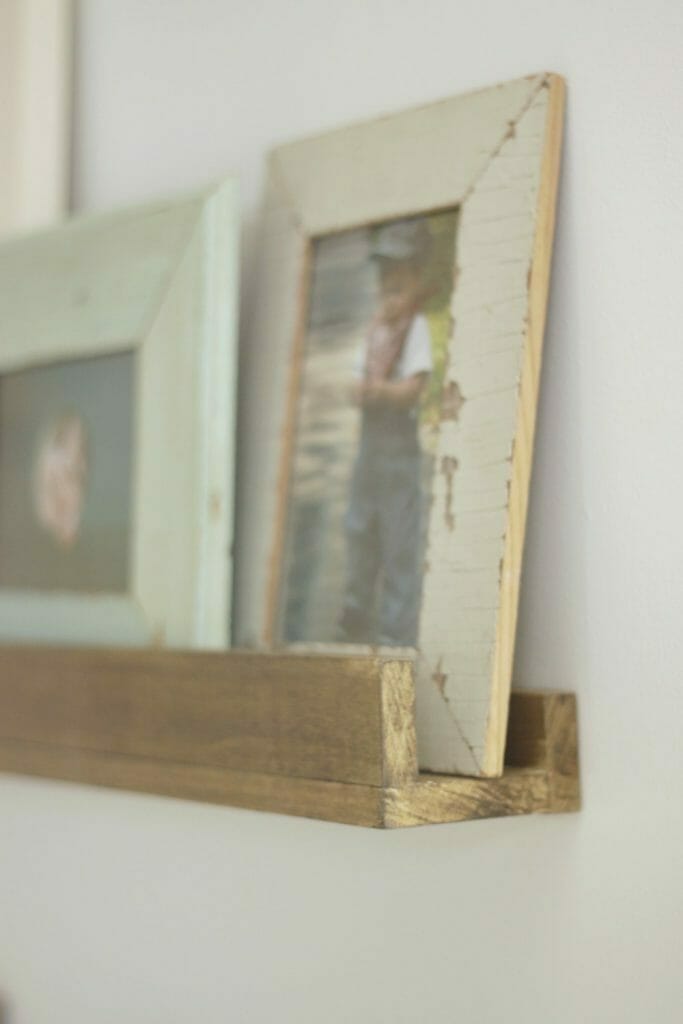 Once I had all 4 holes in the backplate of the ledge, I held it to the wall again with the level in its place and used a screw through each hole to mark the wall.  On the two spots where the studs were, I used a 5/64″ pilot hole, and on the two end spots I drilled holes large enough for my anchors and inserted my anchors.  I held the shelf back in place and started screwing my first screw into a stud. 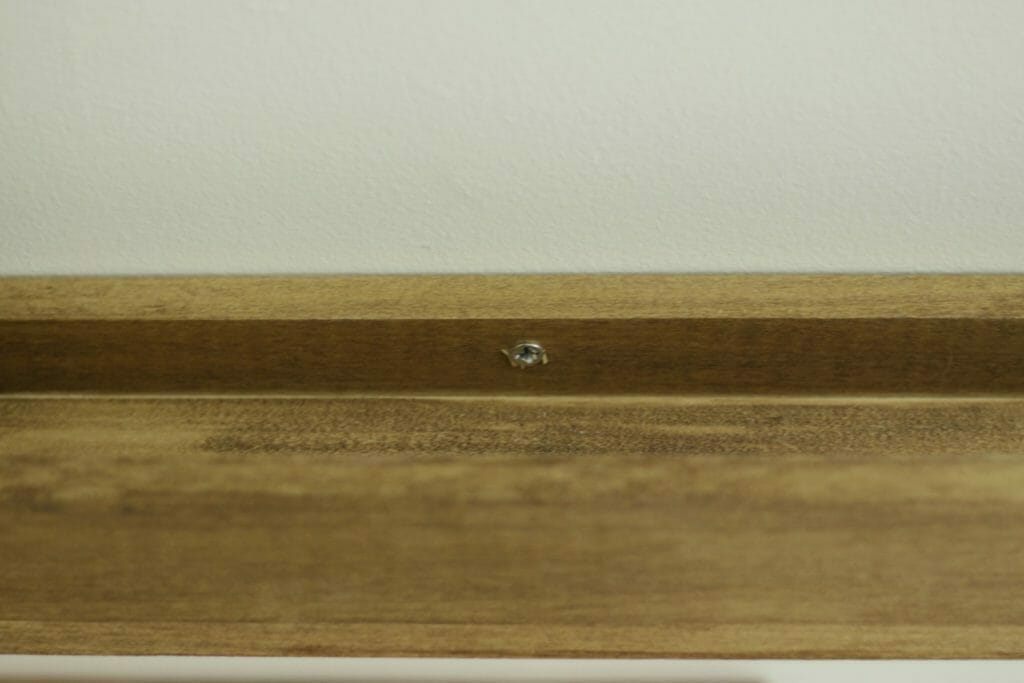 By far, this was the hardest step.  With the taller side facing out, I was not able to use a drill, and a regular screw driver wouldn’t cut it to reach in there, so I had to use an offset screwdriver which was more time consuming and had to be done manually.  Here is where I may have cursed and moaned a little… this work was a little tedious and tiring to my slightly arthritic hands, and I had to screw 8 screws using that offset driver.  If you look along the back of the ledges here, you can see the screws that went into the anchors close to the end of each. 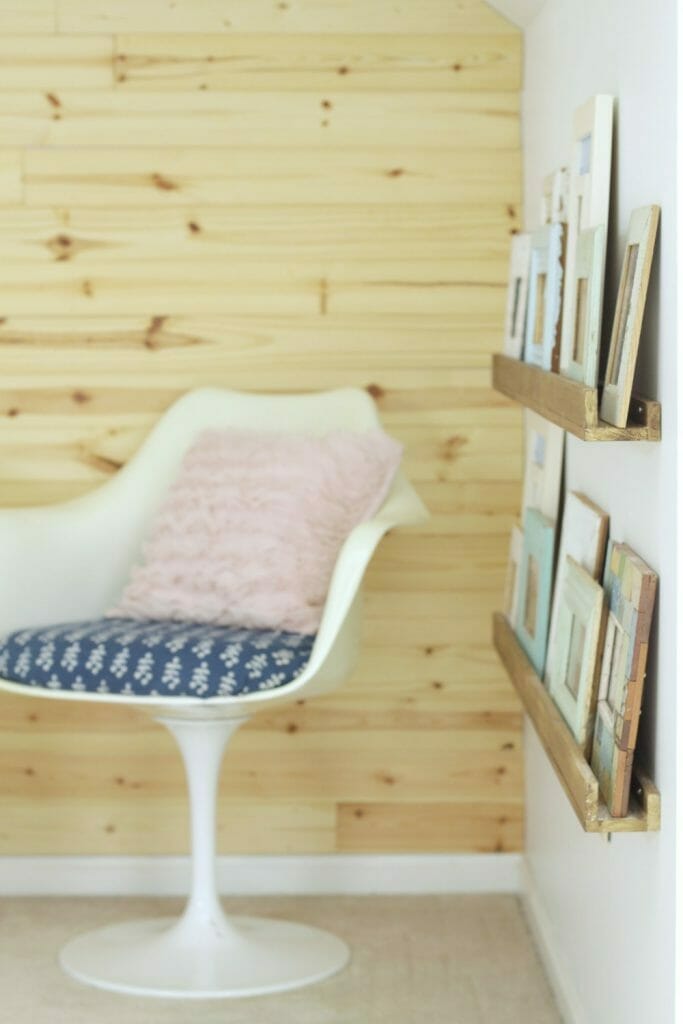 In the end, my hand was a claw, but I was happy I persevered because I love how they turned out. 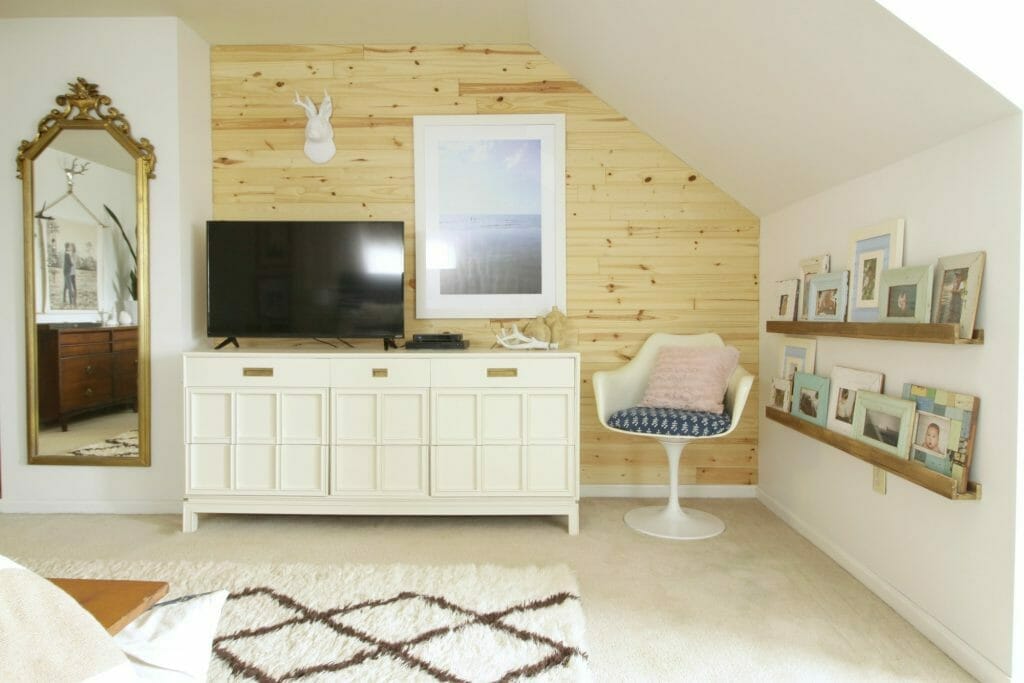 I’d love to change the frames to all simple white modern frames, but in keeping with spending less, I used what I had for now as I mentioned. 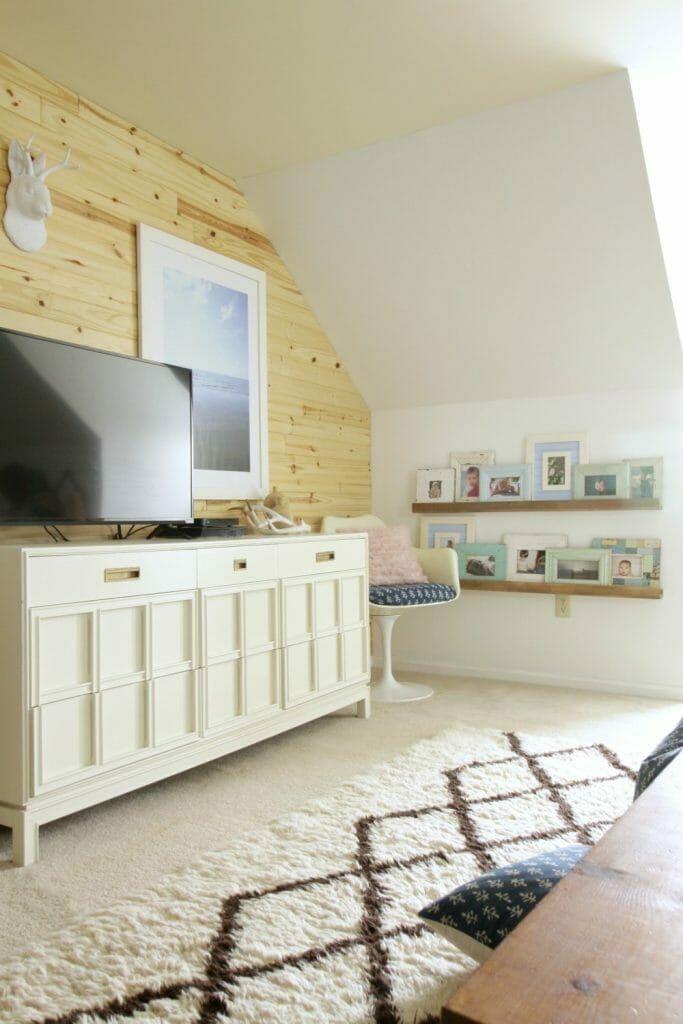 All in all, this project cost me around $12-$15 for supplies since I was able to use mostly what I had minus the wood boards. 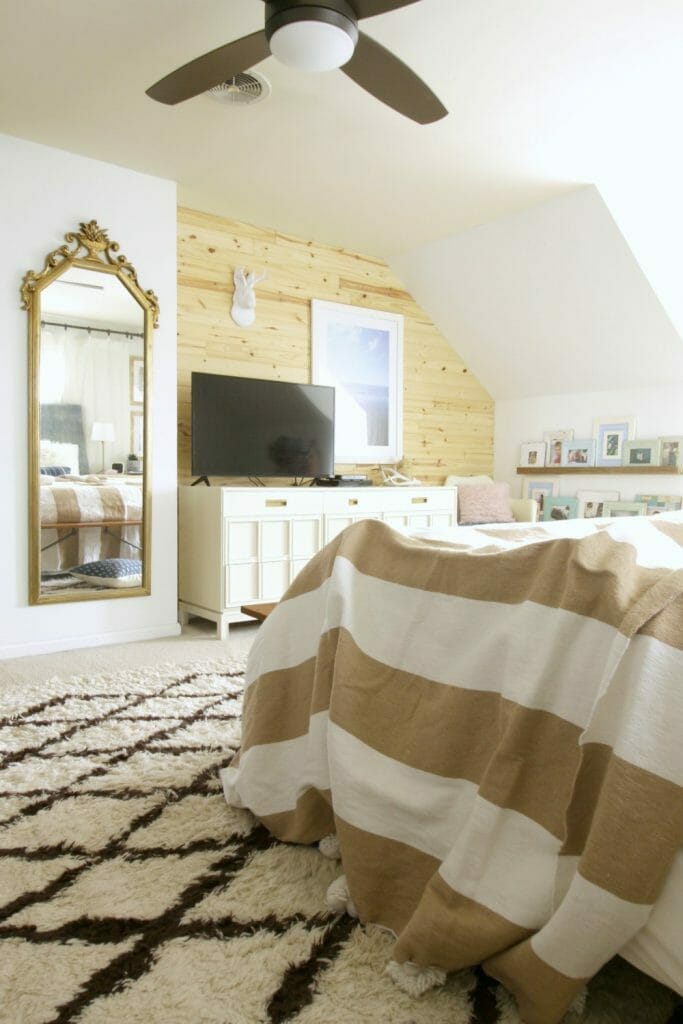 I am excited to add some new photos to this space (as you may have noticed those are predominantly baby photos of my 10 & 11 year old children!), and thrilled that the room now possesses the balance I was seeking. 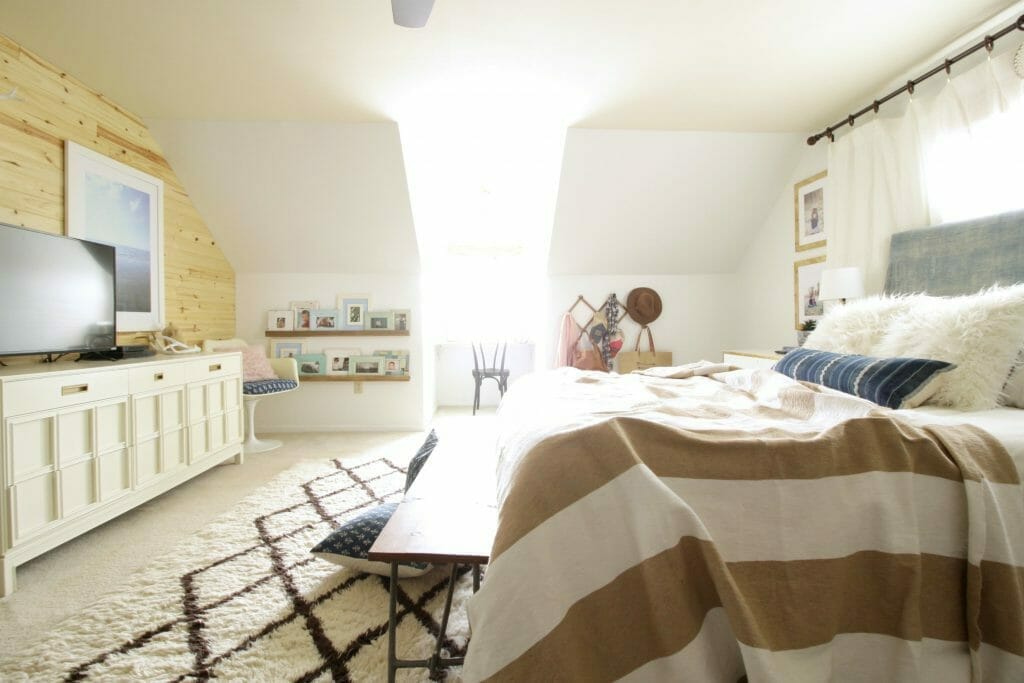 I think now the ceiling paint might be next on the list in here, but clearly lists do me no good… so who knows what will happen next!

You can shop the post here and I have also used affiliate links throughout for your convenience: