I was not compensated for this post, but RugsUSA did provide me with a rug for Emmy’s Room.

We’ve been slowly making progress in Emmy’s room.  I last shared a quick update here, but we’ve had some changes that have made a big impact over the last week and I am so excited to share with you!

Since we have moved into this house, Emmy has never really had a great rug for her space.  I put a vintage rag rug I found and loved in there, but the size was off, and since she wanted to update her room in more graphic black and white with touches of pink and gold, it didn’t have the right vibe.  She knew she wanted a black and white rug, so I sat down with her at the computer and let her peruse RugsUSA with me.

She selected the Spectrum Trellis rug.  And yes, she selected it!  I actually had another in mind I tried to talk her into, which was less graphic and more bohemian.  But she had her mind made up, and it is her room, after all.  I want her to be proud of the space she helped create, and I love that she is so into design and style.  I don’t want to squash that spark.  And when the rug arrived, I was so proud of her because she had made the perfect choice! 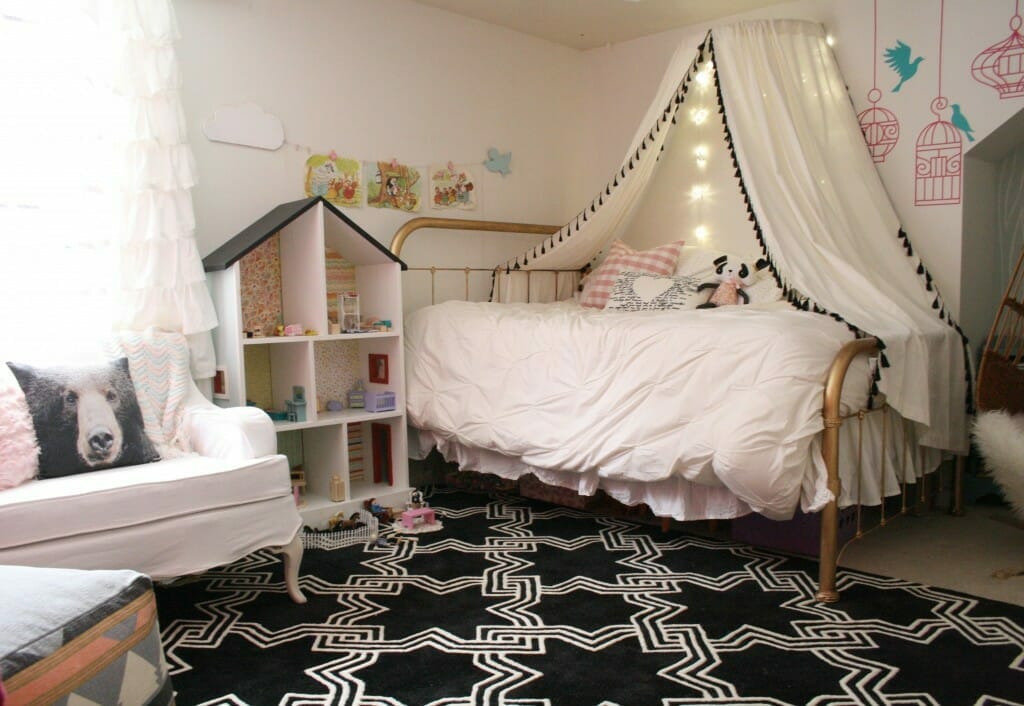 The size is just perfect and really grounds her room. 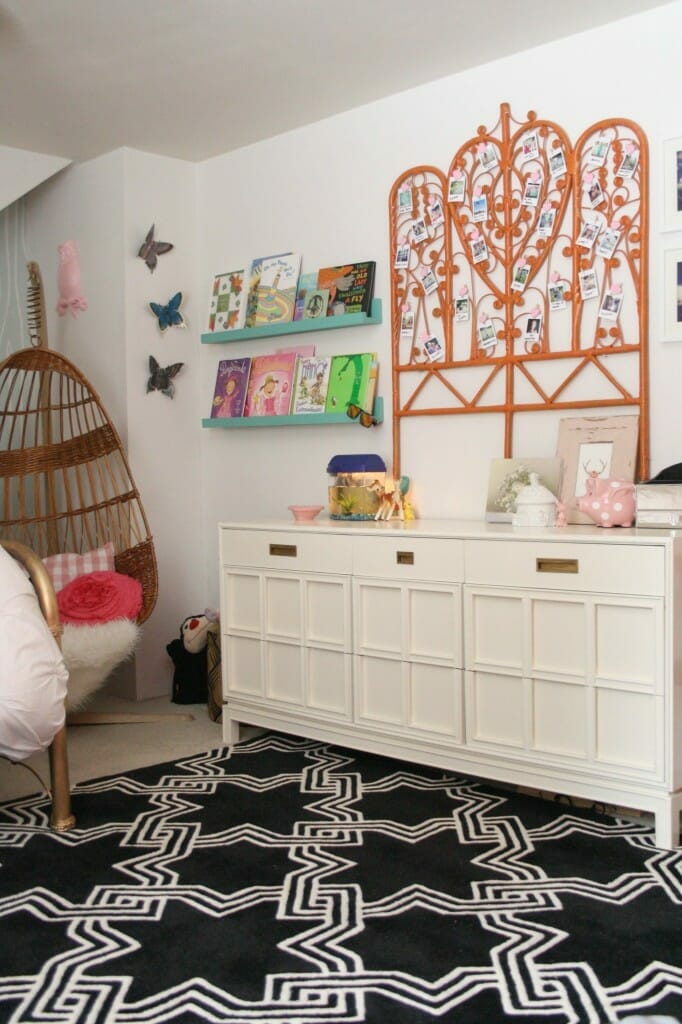 We also moved the dollhouse out of her nook.  She couldn’t play with it with her egg chair in front of it, so we moved it next to the bed to double as a nightstand.  (She loves to have a glass of water next to the bed).  Because we moved it, I was able to scoot the chair a little further back.  I have some plans for that nook though! 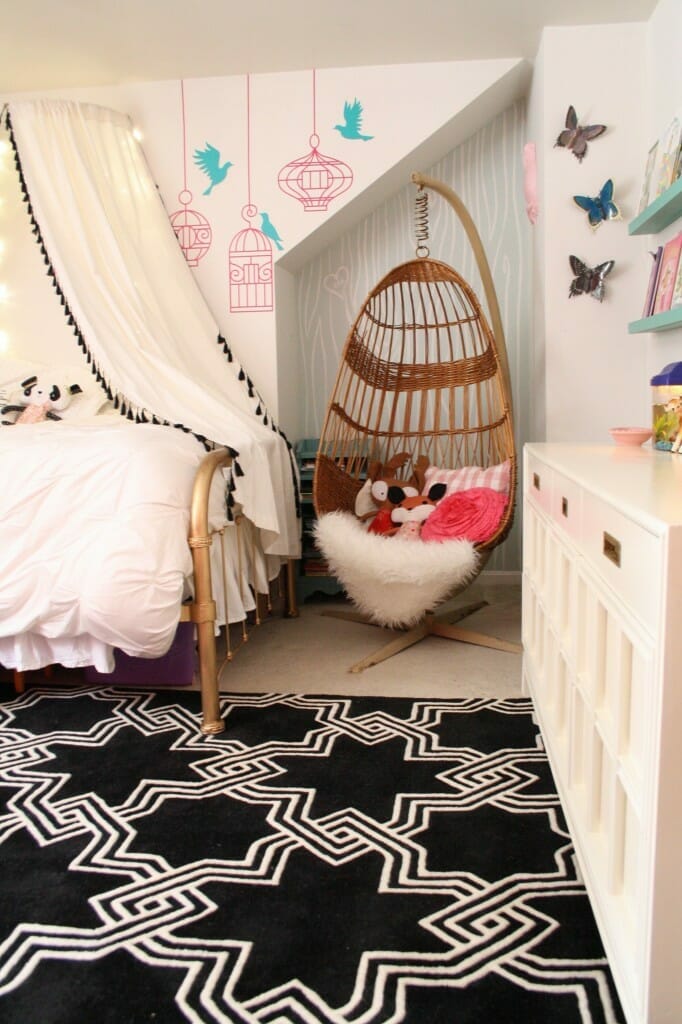 And see how the dollhouse now works as a nightstand, too? 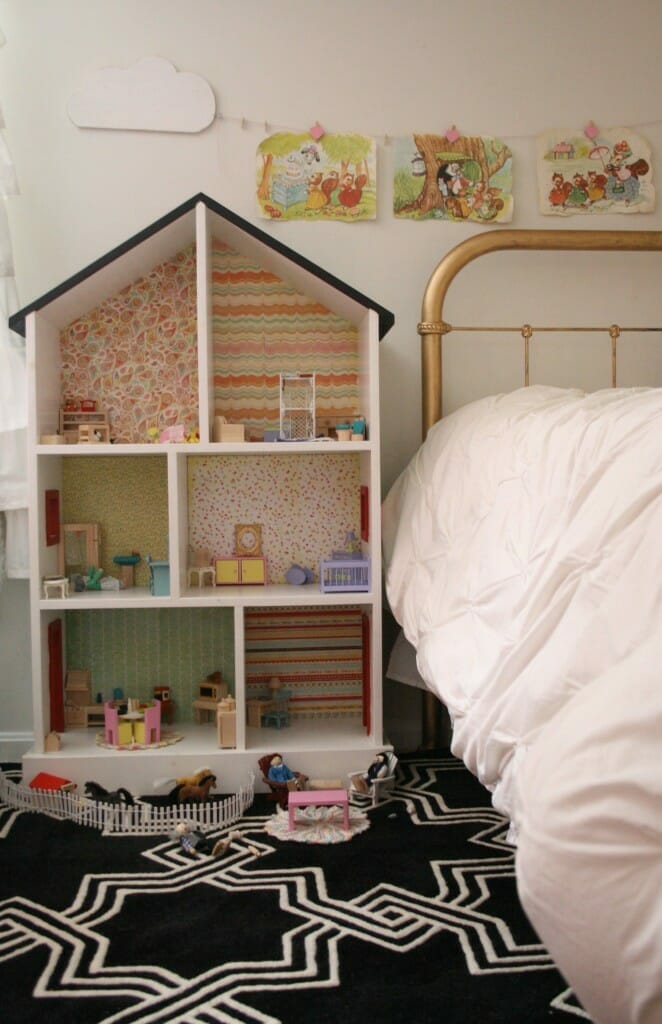 And like I said, she can now play with it.  Don’t tell Sawyer’s friends but they were so excited to play dollhouse this week! 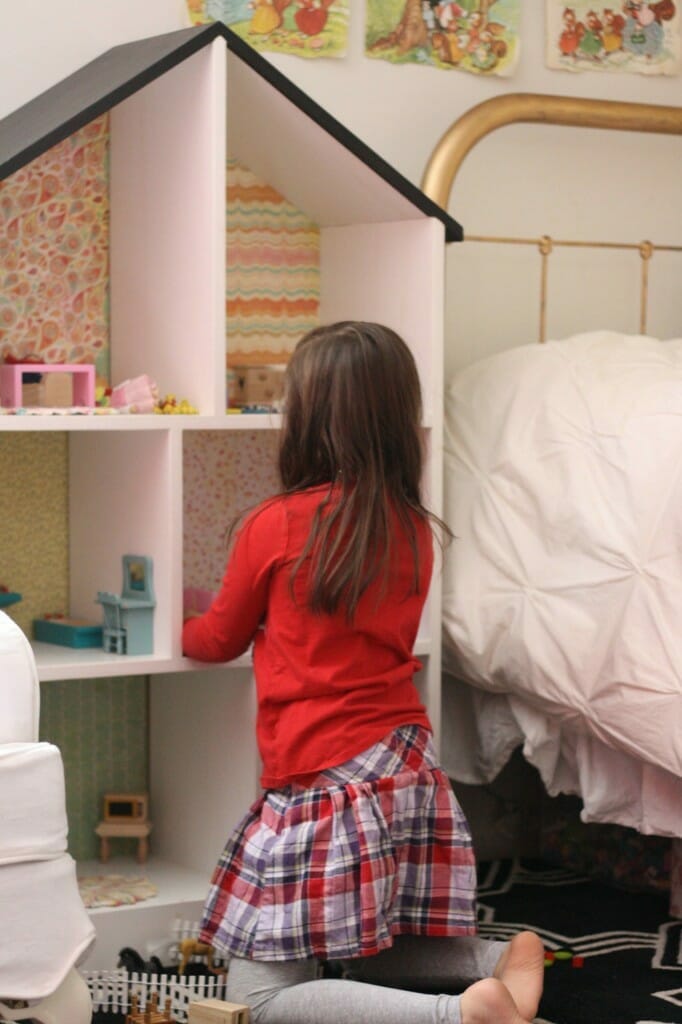 And you may have noticed that the dollhouse can also serve as a side table to her settee!  Do you remember her settee???  Here it is before…  Hard to see it, I know, but it had that green vintage floral on it. 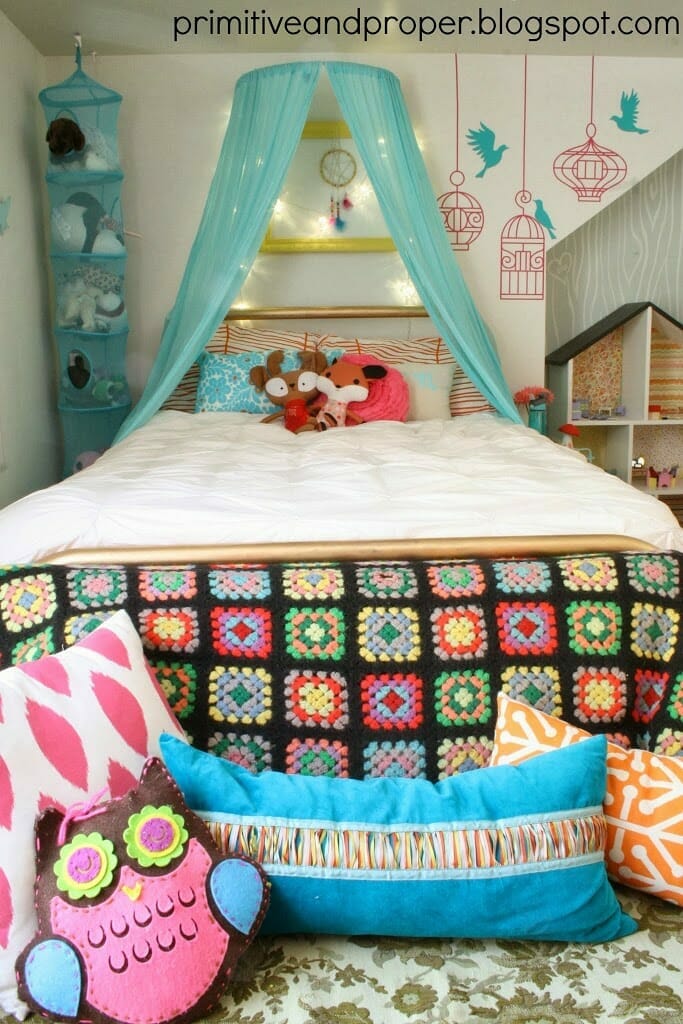 I bought it because it was the perfect size…. I loved it!  All last year I had plans to attempt to upholster it.  Well, that never happened, but lucky for me I had a piece of furniture that a very talented friend who can upholster and slipcover wanted.  I traded her an armoire for her services.  We decided to slipcover it in white denim.  Yes I have a creative child who can be rather messy, but white is bleachable.  She told me that this was the hardest piece she has done to date due to the shape of the apron and more, but OH it was worth it!  She slipcovered it and added velcro so it stays in place, and it couldn’t be better in Emmy’s room. 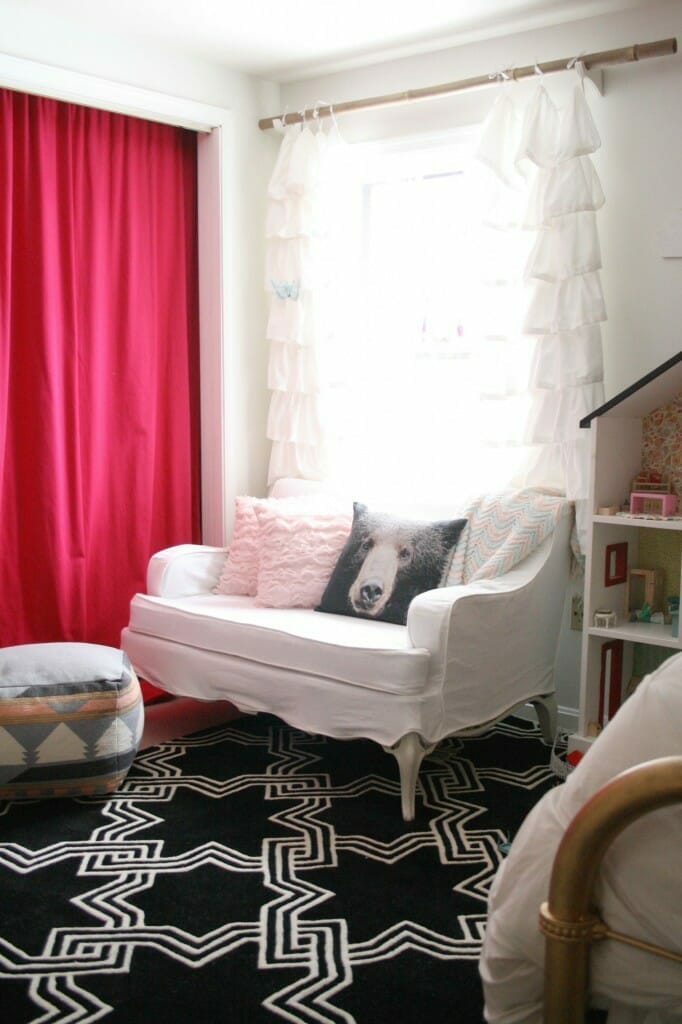 Emmy selected the pillows from H&M, using a gift card from her birthday.  I love her choices, especially that bear! 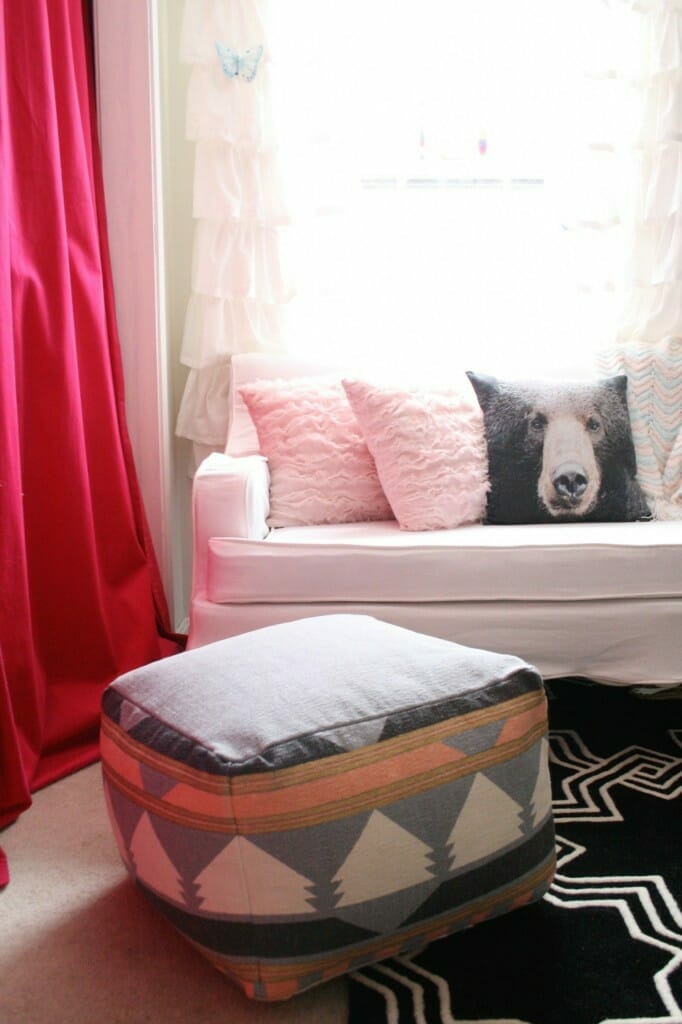 But seriously.  That bear. 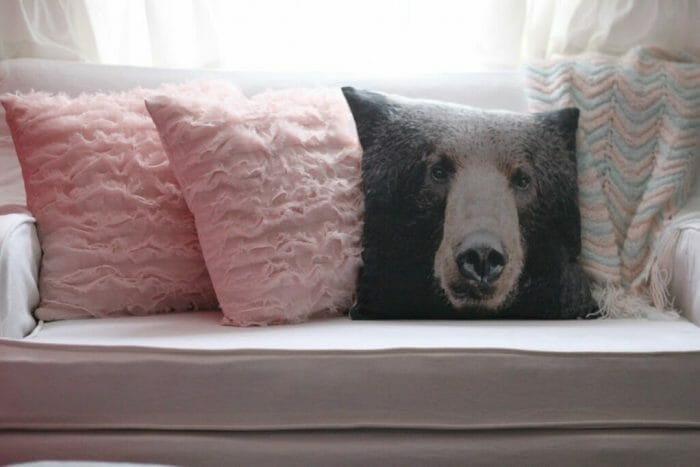 I still need to figure out the wall art situation, but we’re getting there!  I did take down the yellow frame that was above her bed and simply hung the dreamcatcher she created. 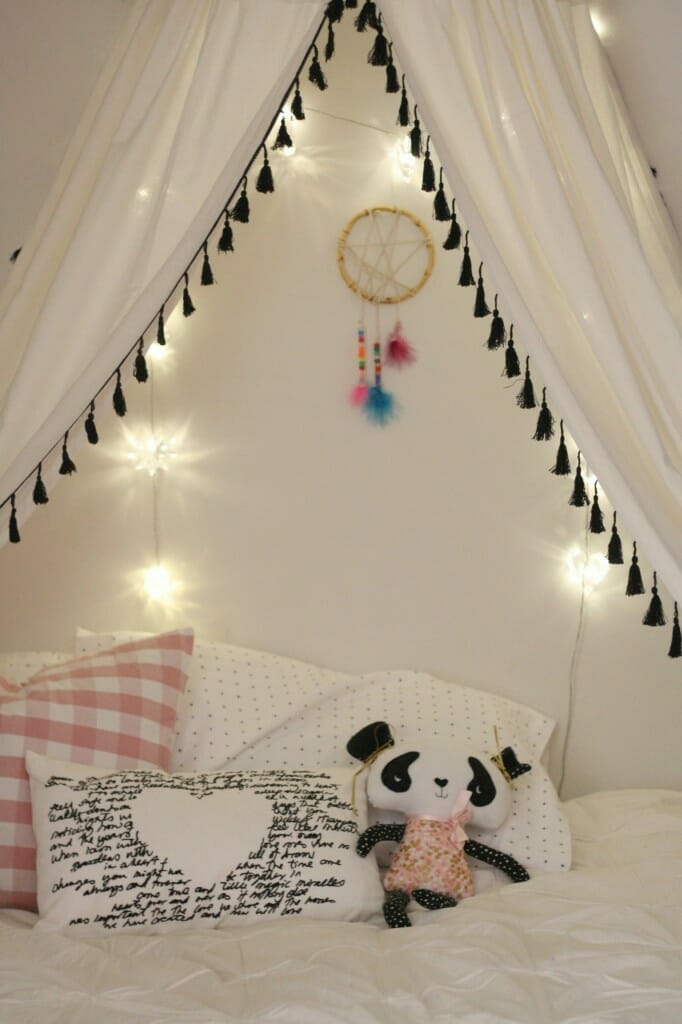 And here is the happy designer, enjoying her space!  (I know it’s slightly out of focus but she didn’t want to stay and pose until I had the perfect shot!)  She just wanted to play in her new space.  And I don’t blame her! 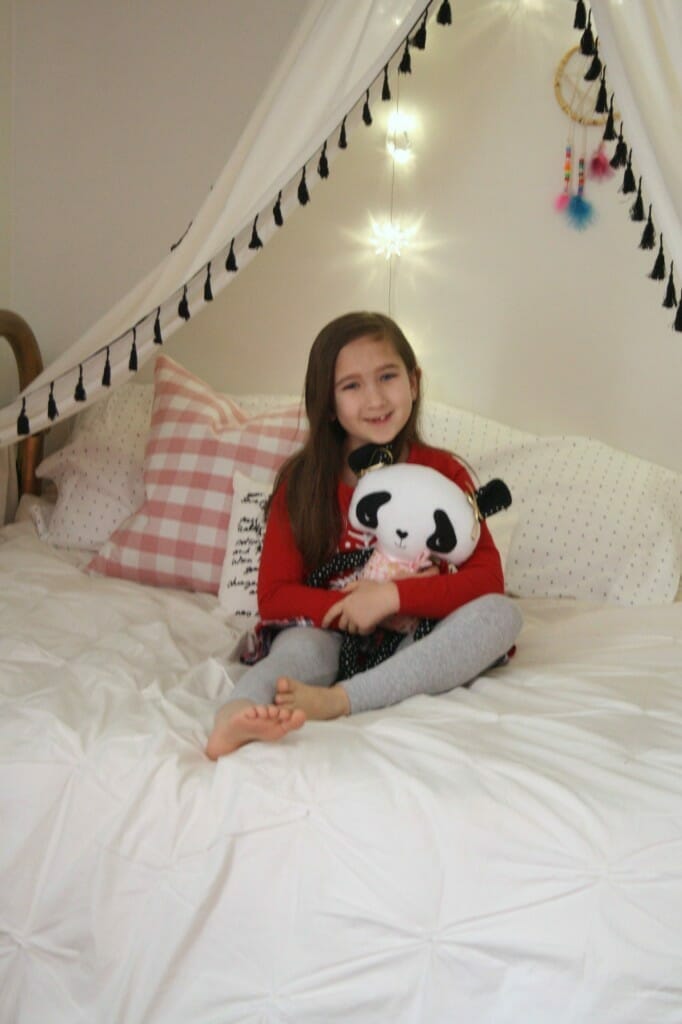 So excited about our progress and am looking forward to finishing this room in    before she leaves for college.

Thank you so much to RugsUSA for providing us with the perfect rug for this space!