Imagine me throwing glitter confetti. Honestly, that’s better than the actuality anyhow because who wants glitter in their hair? Not this girl. We’ve made it to Feel Good Friday 100 and that makes me feel like celebrating! It’s been a busy week over there with my kids being out of school for two teacher work days, but I’ve still got lots of fun to share, including an amazing at-home date night option for you. Let’s get this party started. 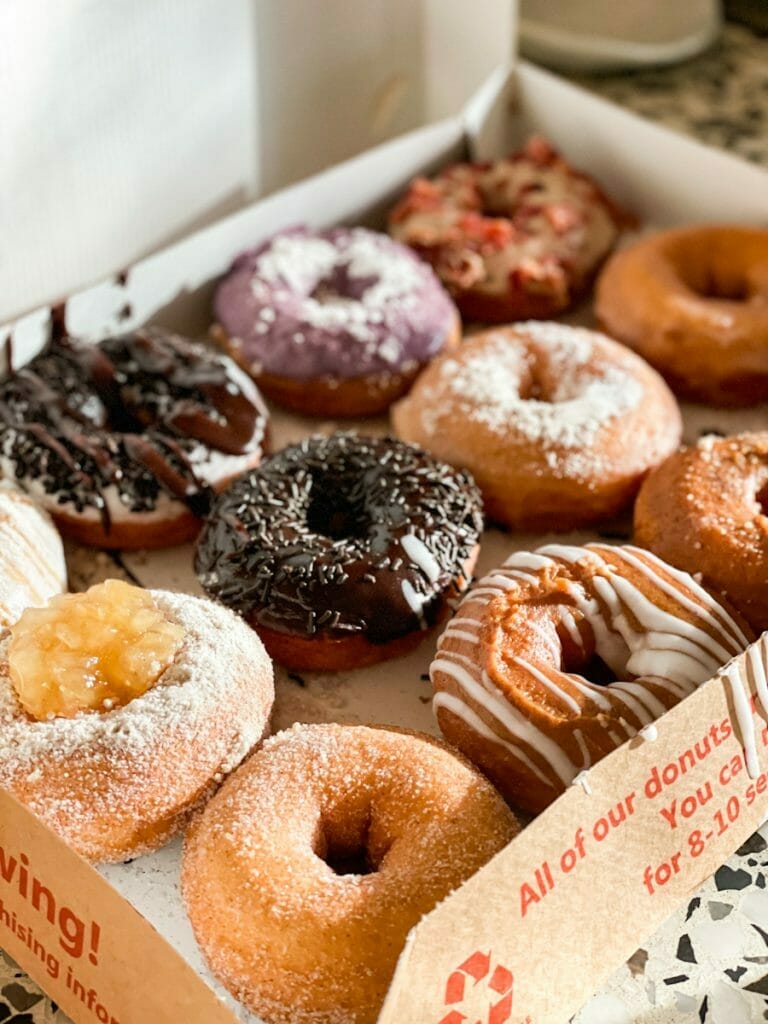 Last weekend, I promised Sawyer we’d try Duck Donuts for the first time. Friends have raved, but we had yet to have the Duck experience ourselves. I ordered a fall box plus two extra donuts that Sawyer and Wilder requested. All of us were in hog heaven, minus Wilder who scraped the sprinkles from his into a bowl and ate those. True story. Meanwhile, I sampled four flavors, cutting them each in half and taking one portion. Holy moly, were they delicious – especially when they were fresh and warm, but they held their flavor and quality for a few days as everyone around here kept eating them! My favorites were the apple cobbler and both of the pumpkin flavors, plus the random blueberry one that was put inside of our fall box in lieu of the PB chocolate it was supposed to have. My kids wanted blueberry to go back to spring where it belongs, but Chris and I enjoyed it. Mine were all fruit flavored, so I had a healthy breakfast. That’s what I’m telling myself.

And now, an actual healthy meal 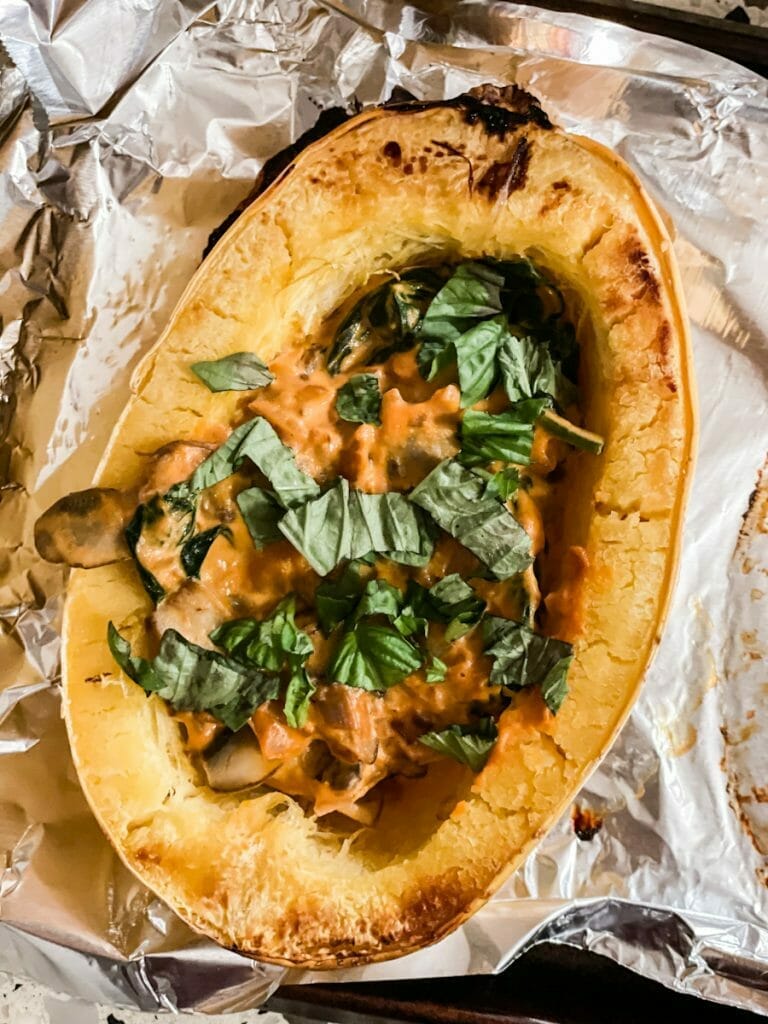 This is the worst photo of one of the best meals. This weekend, Emmy wanted spaghetti and meatballs, so Chris made that for the family and I made myself this spaghetti squash with vegan vodka sauce. It doesn’t actually include vodka but the creamy sauce tastes like vodka sauce. I loved it and Chris was curious so he tried a bite. “Mmmm, that’s really good!” he exclaimed and promised me he’d actually eat it if I made it. In the future, I will use the sauce recipe on its own because while he liked the sauce, there is no way in hell he’ll eat the squash. But I’ll take my small victories where I can. 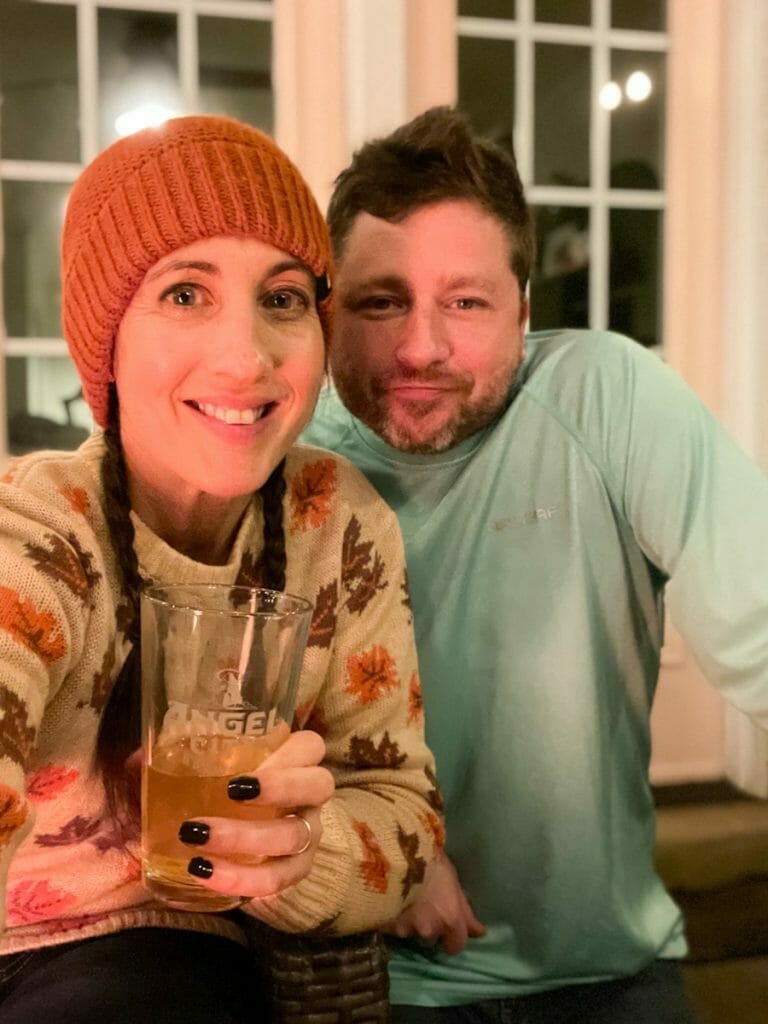 Ooof, to be honest, we were in desperate need of a good date night with connection and conversation. Last weekend, we had Sawyer watch Wilder and we sat on the patio with beverages, a fire pit and ki. I had pre-ordered this game this summer after hearing about it. It’s a card gamed filled with questions and prompts and each player takes turn telling stories (from their lives, not fictional) so you get to know each other better. Honestly, this game was a game-changer. 😉 We both shared stories we hadn’t before and learned more about one another. I shared what I wanted my next tattoo to be and Chris shared that he wanted to get one which blew my mind. I suggested my face across his back, but he wasn’t down with it. It was so great to sit outside and just be 100% transparent and honest. 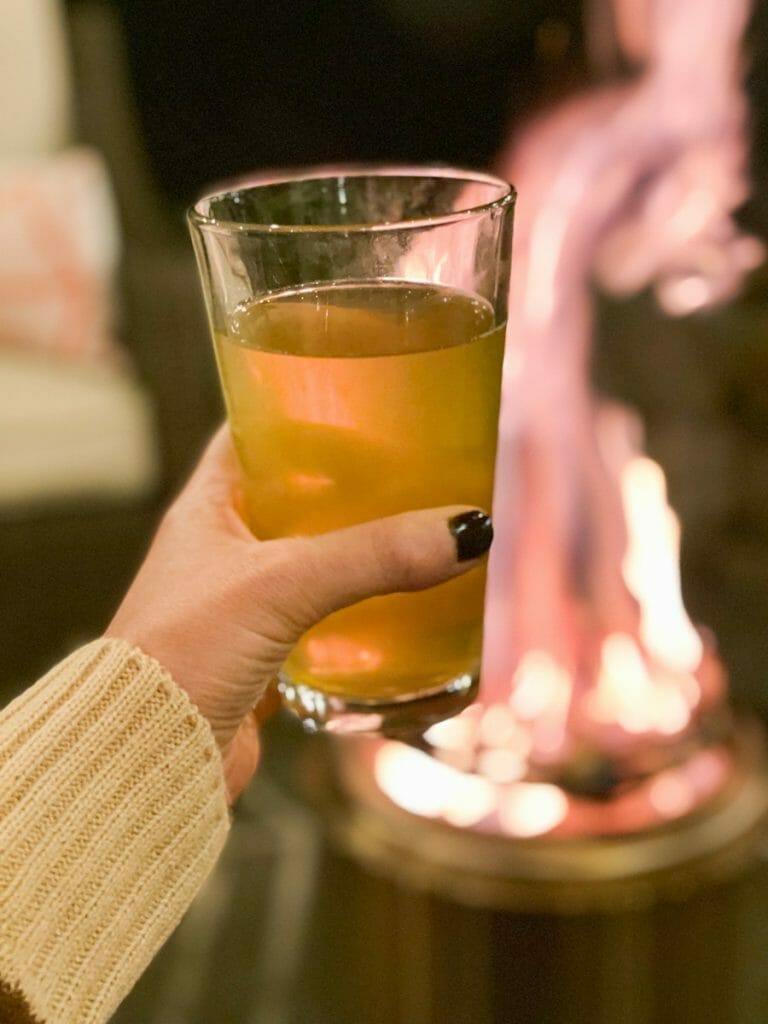 Plus, we enjoyed crowlers of Bull City Ciderworks fall flavors and it was cold enough to break out my leaf sweater! All in all, the night was a total win for us and we needed that.

Brené Brown is a favorite human of mine and she recently introduced me to the music of Jake Wesley Rogers. She interviewed him on her podcast, Unlocking Us. I fell in love with who he was as a person and was intrigued and wanted to hear his music. I played his songs on shuffle and absolutely loved it. His lyrics are a salve to my soul and I have been playing him on repeat over here. 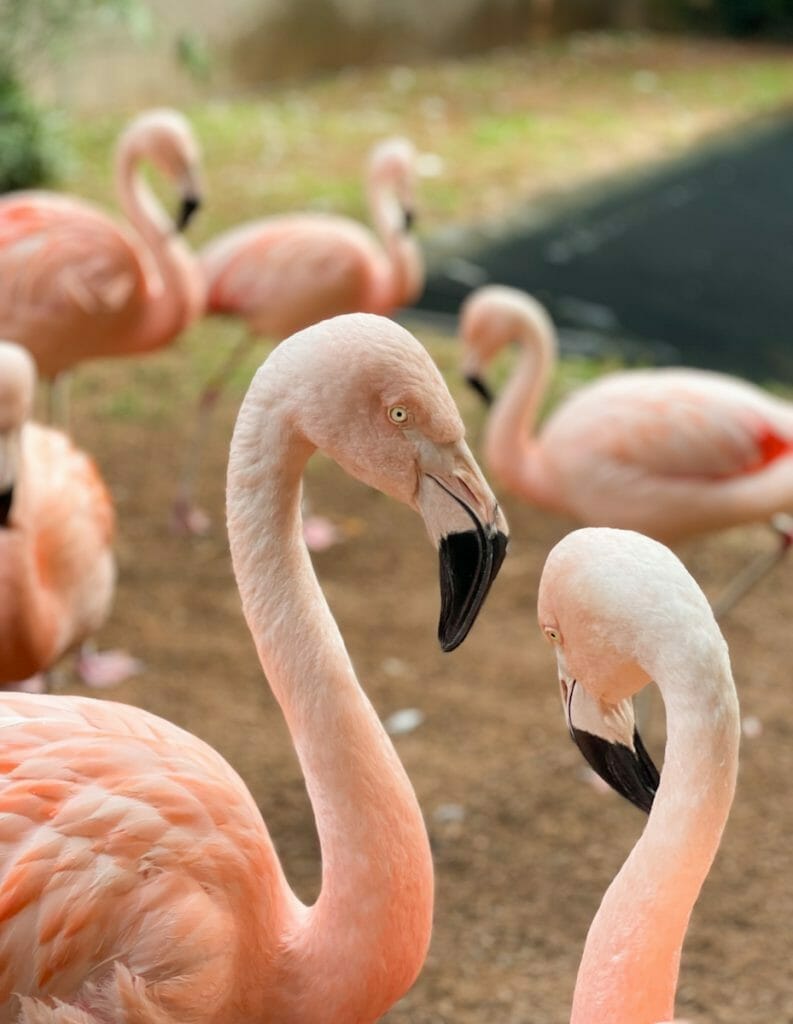 Thanks to my job, I had 5 passes to the North Carolina Zoo to use before the year ended. I made plans to go Monday with Emmy, Wilder, Wilder’s bud and his mom, and we totally lucked out with the most perfect weather. What I love about this zoo is the beauty of the grounds. The thoughtful planning and maintenance care is obvious as you stroll along the paths. Additionally, all of the employees we encountered were friendly and happy to be doing their jobs. 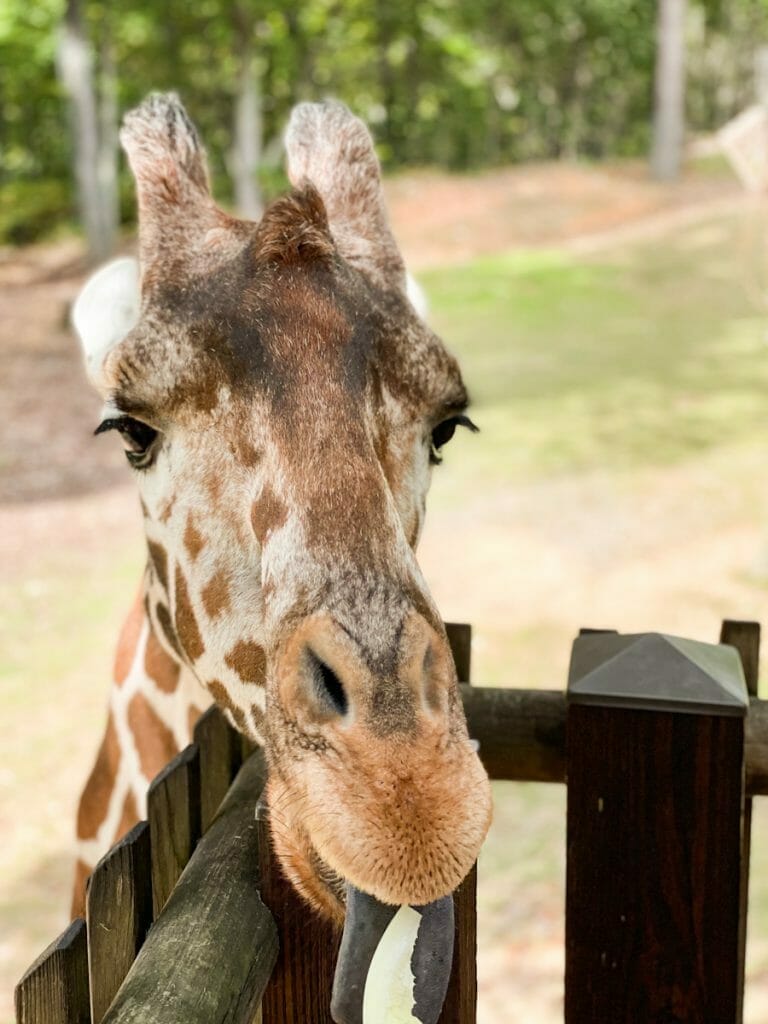 We splurged and bought tickets to feed the giraffes and everyone enjoyed that experience – especially the giraffes. 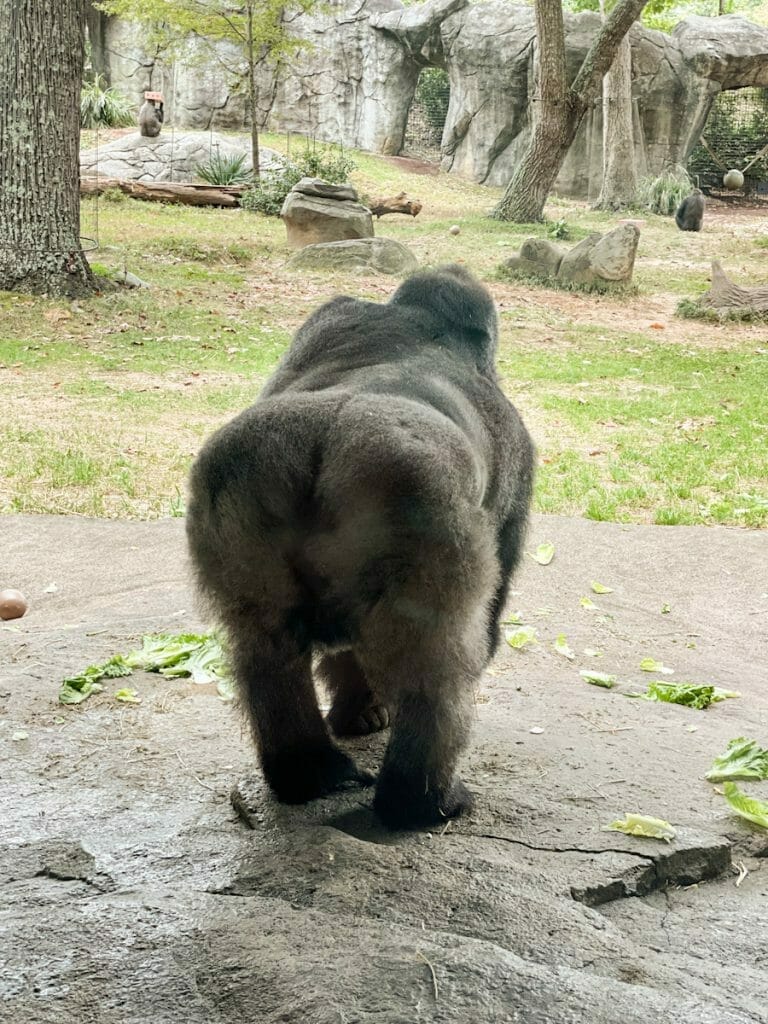 Chris had asked Wilder to take a picture of the gorilla for him. When we arrived at their space, the oldest guy – still younger than me by 5 years – was giving us a front row seat to his rear. I opted to send Chris that photo. “Here’s that gorilla you requested.”

And so it begins 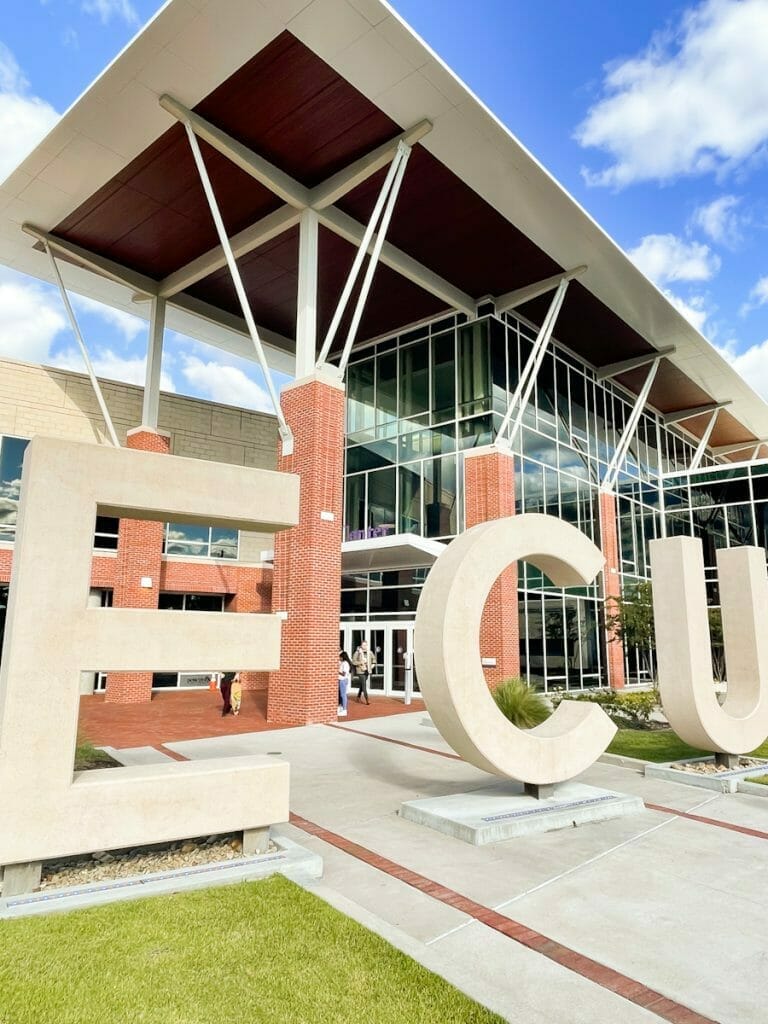 On Tuesday, Emmy watched Wilder while Sawyer and I took a day-trip to Greenville, NC to check out Eastern Carolina University. This large university has so much to offer and Sawyer was definitely impressed. While I don’t know if it’s “the one,” it certainly lit a fire in him about going away to college. We were both a little envious of the amazing rec center and all of the activities it offered! Also, could someone please tell me how it is that I am taking my baby to look at colleges?!?!? 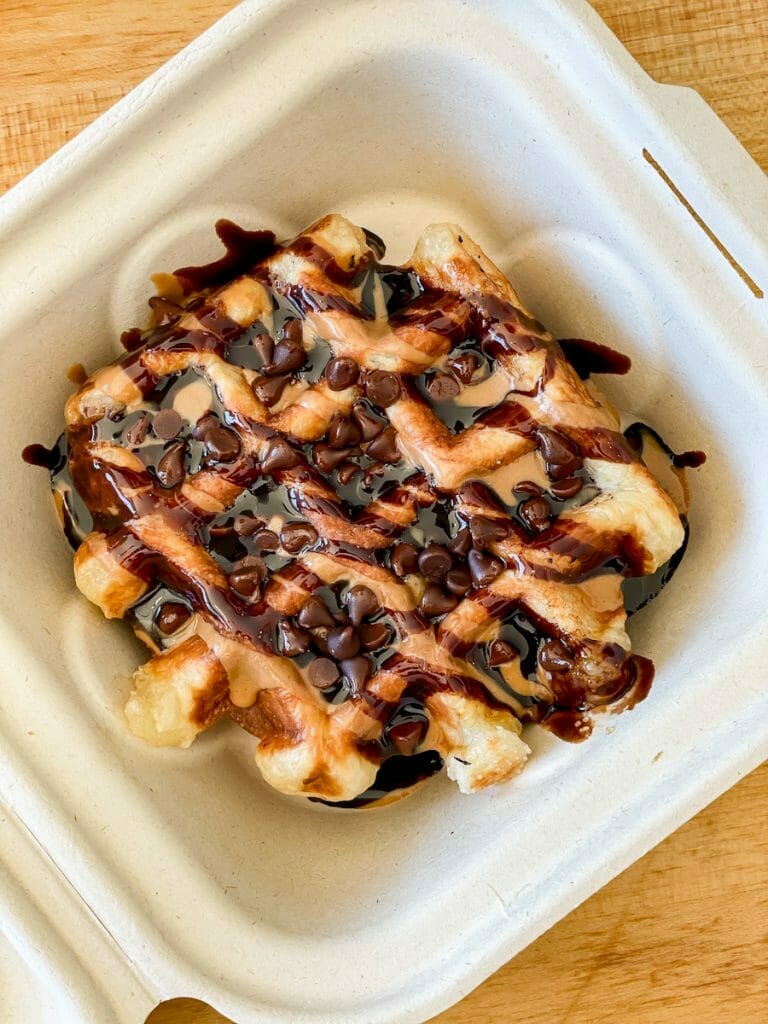 We arrived a little early so that we could check out the surrounding college town. I treated Sawyer to a Smashed Waffles. He said it was delicious but a little too much for him, so he didn’t quite finish. You can see what a decadent treat it was. Oh, and yes, I let him call that his lunch. 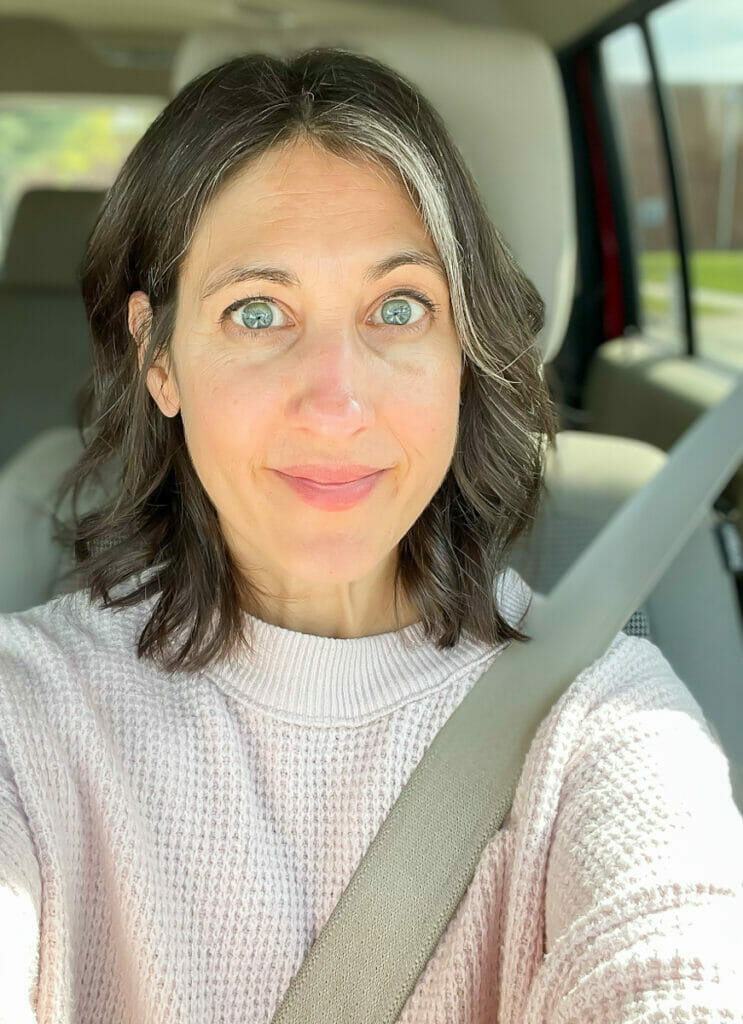 My hair has been bugging me lately, just looking like the result of stress and too thin. I decided to chop it and get a fresh, healthy slate. Caitlin at Crop Salon delivered and I am so happy with it! I just did this yesterday, so now we’ll see if I can actually style it as well. 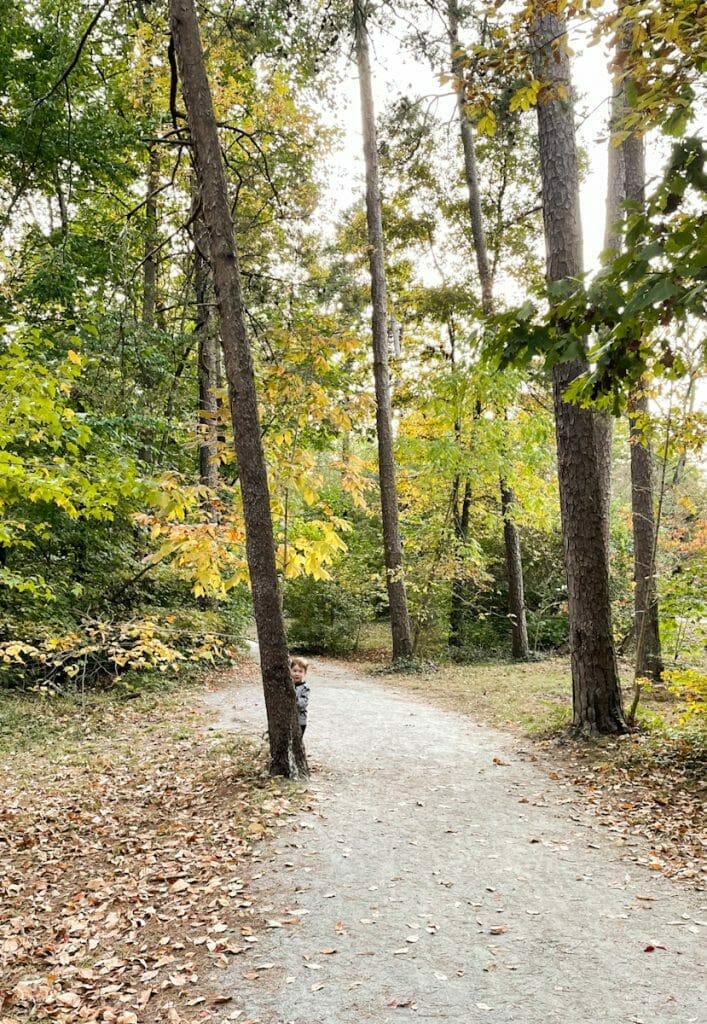 Last Sunday, Chris and I took Wilder to a little loop trail near our house for an evening stroll. It was a wonderful evening and the leaves were just starting to turn here. We passed a man running and then saw him again when he was walking and Wilder said loudly, “That guy isn’t running anymore He is tired.” Haha! As a runner, it made me giggle to think if it had been me. 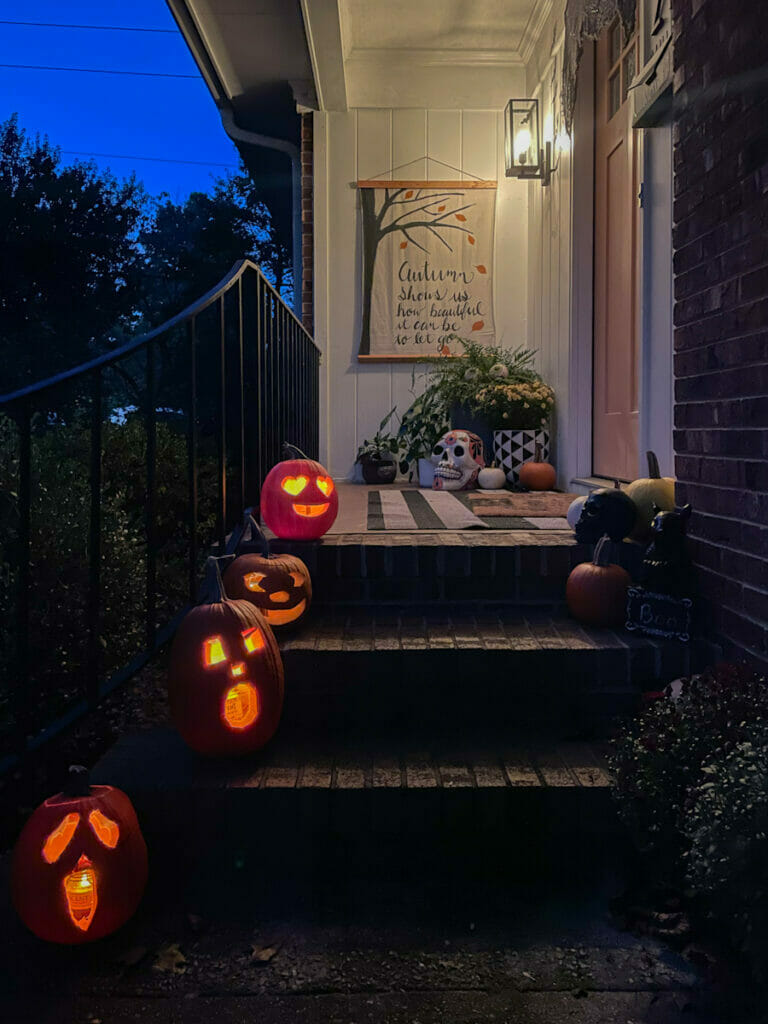 The Bustamante family tradition is to carve pumpkins at our last possible chance. That happened to be Wednesday night before Chris headed out until Sunday. So we forced our kids to hang out with us and play with knives. No one was injured and a couple people actually had fun so I am calling it a win. Oh, and this may have been the first year I carved mine without the annual “F” bomb. Can you guess whose is whose? Hint: Sawyer was too cool to carve, but I forced him to sit with us. 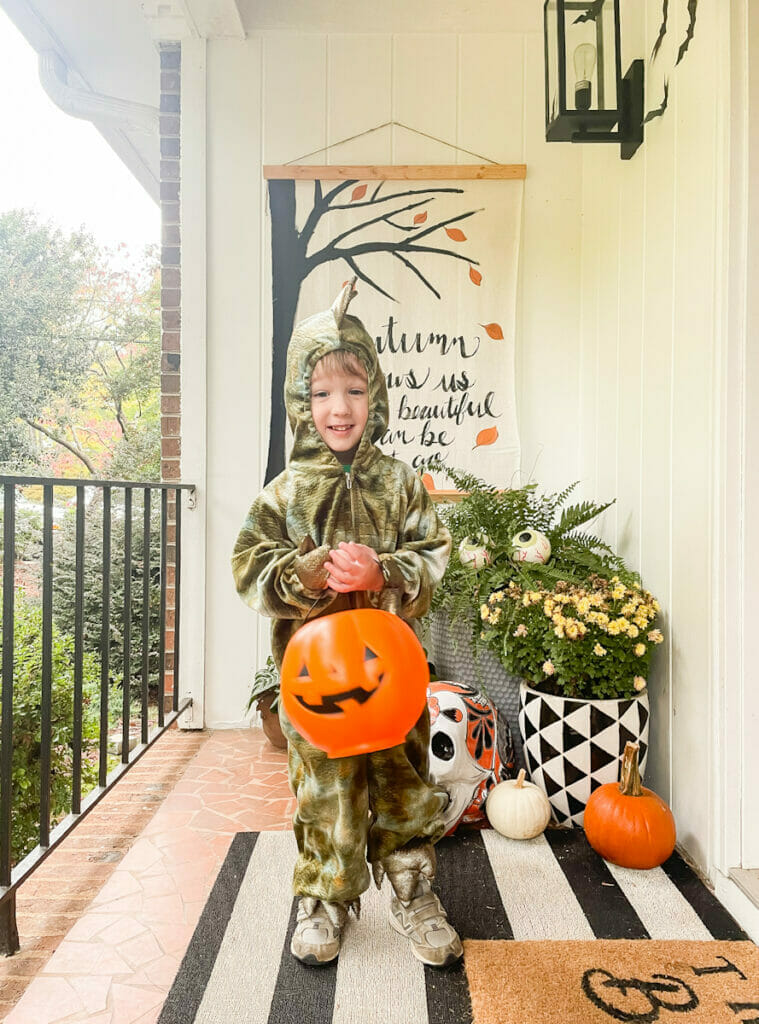 Wilder is all set to go trick-or-treating this weekend as a dinosaur, thanks to Poshmark. I hope you have a fantastic and safe Halloween weekend. Wishing you more treats than tricks, but a few tricks, too – gotta keep things interesting!