It’s been a whirlwind of a week here with Halloween, work and taking Sawyer on another college tour. I haven’t had as much room in my life this week for finding great new things to share, so this post may be short and sweet! (Coming back to this sentence after writing this post to say, “Scratch that!”) But don’t go anywhere, because I’ve got our new fave squash soup, a delicious new TJ’s snack plus a new-to-me up-and-coming musician to share. Let’s go! 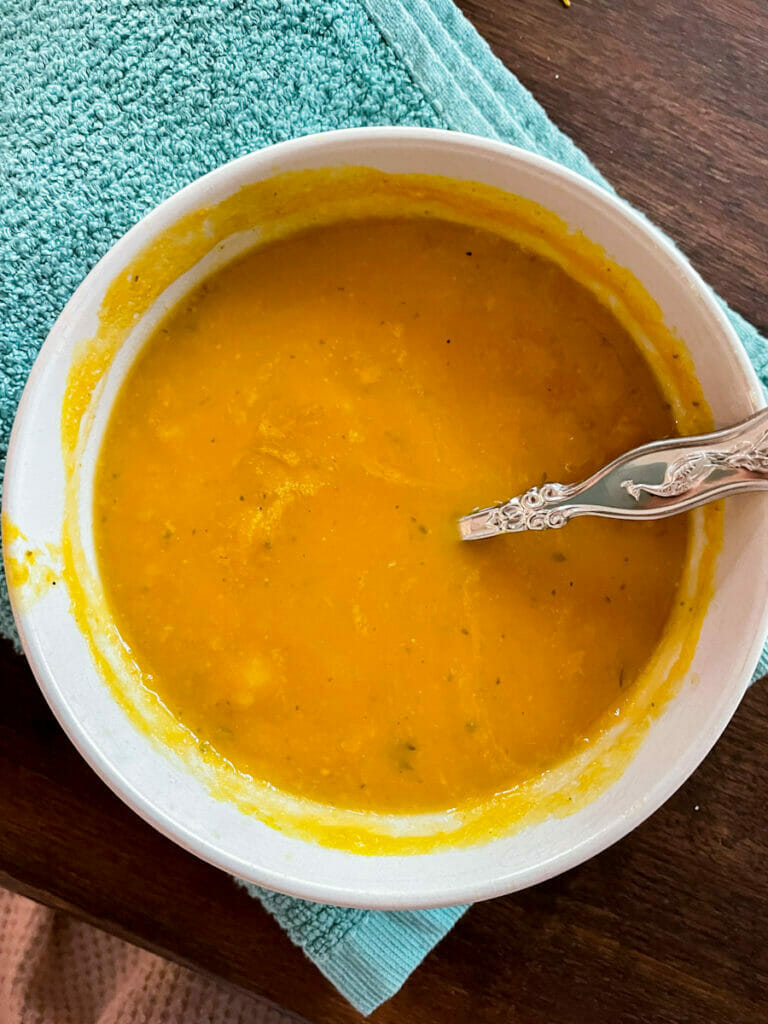 Let’s start with a terrible photo of soup I started eating and then thought – wait, I need a photo! So there you have it. Anyhow, my go-to butternut squash soup recipe for years has been one that uses curry, sweet potatoes, carrots and onion. I bought fennel and apples at the farmers market and decided to give this roasted butternut squash, apple and fennel soup a go and it was incredible! It’s more savory and Chris and I both agreed we liked it more than our usual. This soup will get made many times this season, I can tell!

New Musician to Check Out

OK, so he’s not new, but new to me! My friend Wendy’s son is a drummer and plays for Christian Sparacio and will soon be touring with him. Wendy introduced me to his music and I’m sold! It’s very mellow and upbeat at the same time. Check out this song, which is one of his most popular:

I also love this song off of his latest released album (literally just last week): 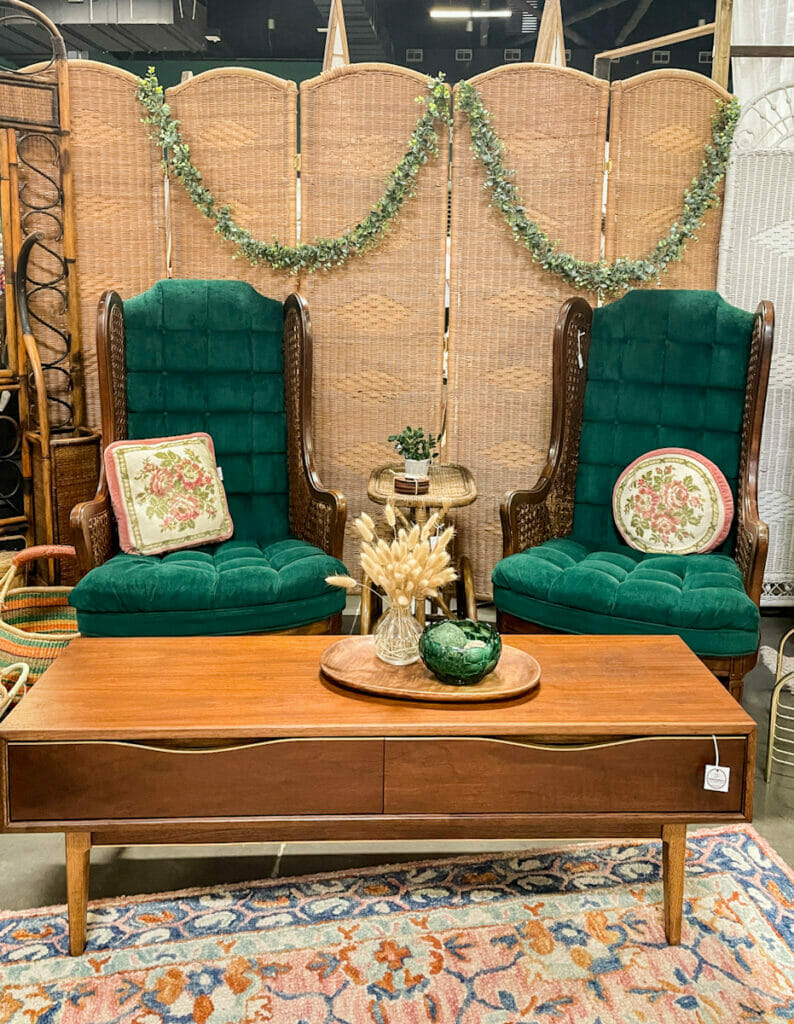 Last weekend, Vintage Market Days hit the Triad and I went with a couple of girlfriends. I controlled myself and didn’t buy much. I did love this space – that coffee table and those chairs!!! I wish I’d grabbed her card because I am on the lookout for a dresser for Wilder. She had one I loved but it was black and I want wood or dark green. I did purchase a cute long flannel you’ll see later in my Halloween pics. All in all, I just went to have fun with my friends. 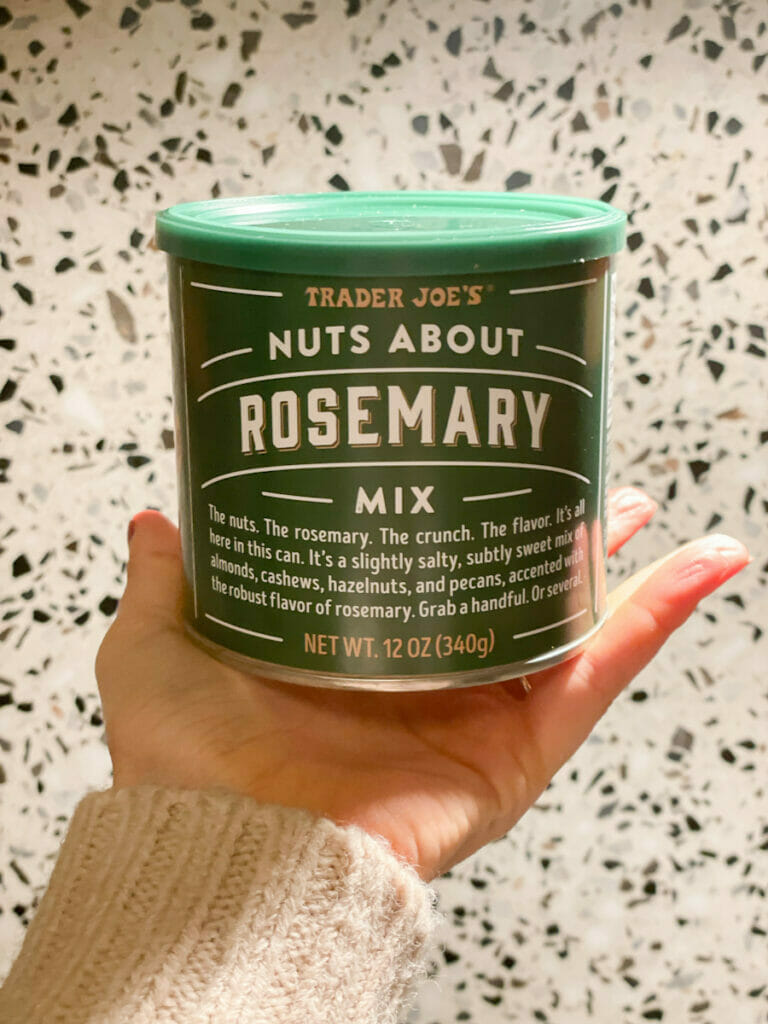 Emmy, Wilder and I hit Trader Joe’s this week for some of our staples (their mixed nut butter and sparkling lemonades!) when I spied these nuts on an end cap.  “Well,” I thought to myself, “I like rosemary and I like nuts.” Into the cart they went. When we got home it was time for my pre-dinner-unnecessary-mindless-snack so I cracked them open. As soon as the can opened, I heard a choir of angels sing. And then when I took a bite, the angels broke out into “Allelujah!” They’re that good. If you live near a TJ’s, run. Now. Before I buy them all. 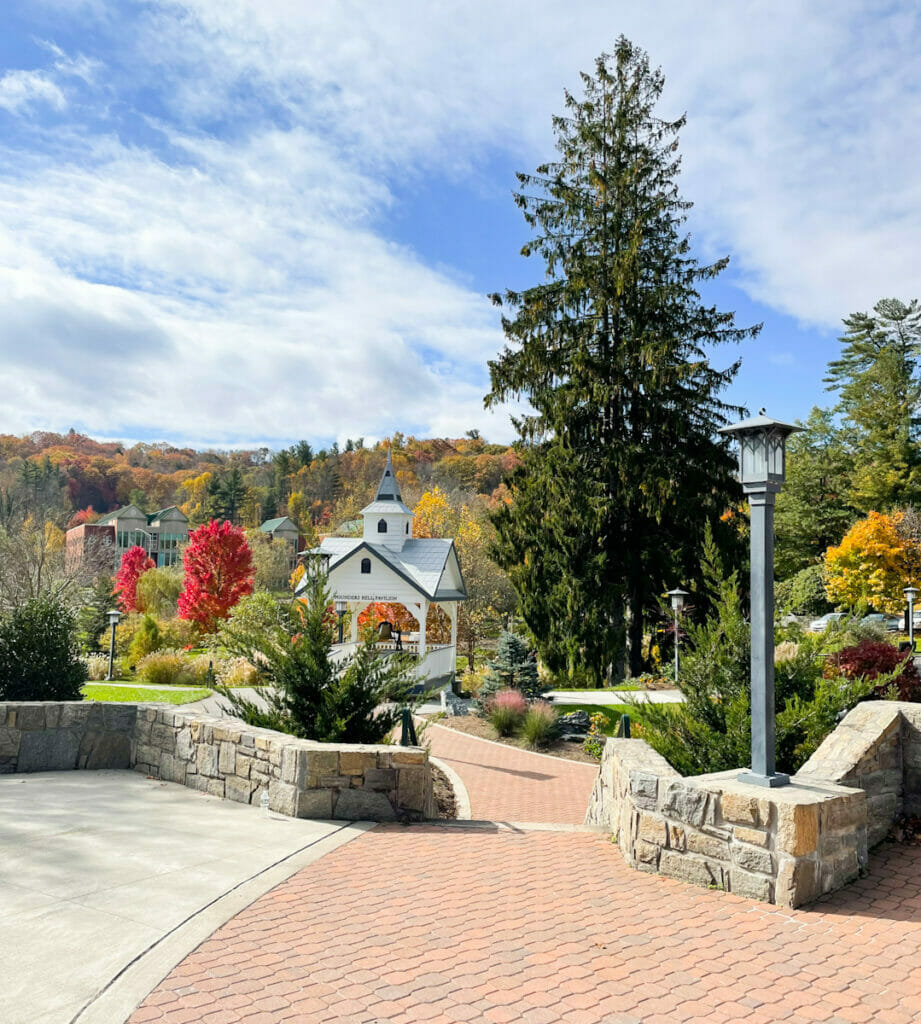 This week, Sawyer and I took a drive out to Boone to tour App State. It was a beautiful time to visit the campus. Sawyer loved it but I truly fell in love! This school has so much to offer, focuses a lot on sustainability and the campus and location are picturesque. If he doesn’t choose this school, I may have to go back to college. Or force Emmy to go here. Sawyer and I both agreed that it was her kind of vibe. 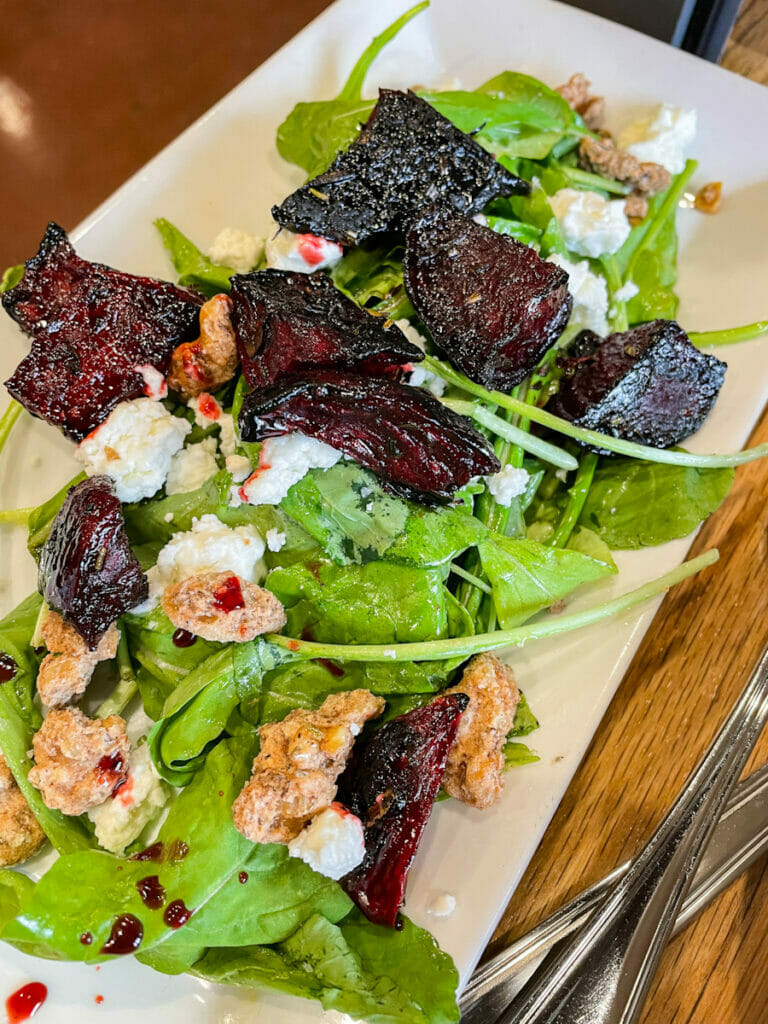 While we were in Boone, we ate lunch at Lost Province Brewing. They were out of the seasonal salad I wanted to try, so I opted for their beet salad – which did not disappoint – paired with their butternut squash bisque. Sawyer had a pizza that he loved! All in all, a good experience. I also love that the main drag in Boone runs parallel to the campus so if Sawyer went here, he could hopefully find a restaurant to serve at. Chris and I both waited tables in college and agree that every human needs to do it at some point in time. You truly learn how to treat others by seeing how customers treat you – good and bad. 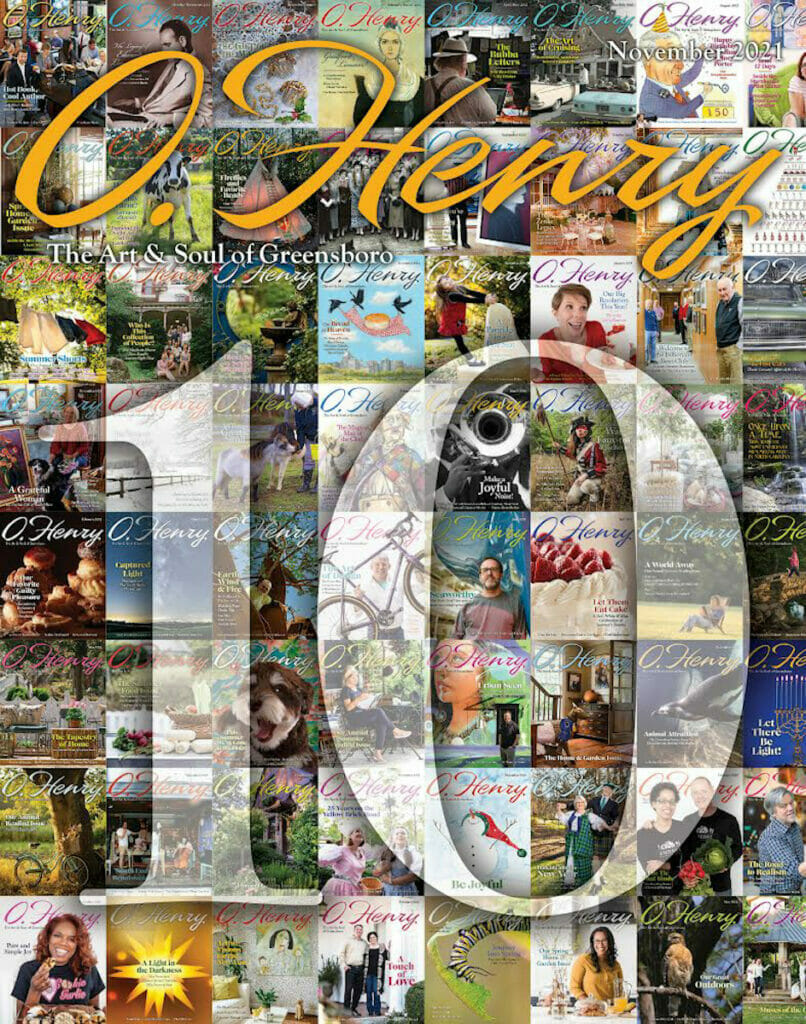 One year ago, I shoved aside my impostor syndrome and took a job as Digital Content Manager for O.Henry magazine. Under my editor, I’ve grown and learned so much. With her help, I even had a piece I wrote published in the magazine in September. Wilder and I were lucky enough to be the cover models for the August reading issue as well. It’s been a tremendous year filled with opportunity. As I write this post, we are preparing to celebrate 10 years of Greensboro’s longest running magazine tonight. One year for me, Ten for O.Henry. I can’t wait to see where we go from here. Sadly, my editor – who has been an incredible friend and mentor – is leaving. She’s following her heart, which is calling her back to the mountains, and trusting that the universe has something special in store for her. (Also the same way that I took this job – through listening to the universe and putting my faith in it.) I can’t wait to see her spread her wings. She’s an incredibly gifted and talented human with so much heart and depth. I admire her willingness to listen to her inner knowing about what’s right for her, even if it may disappoint others. It’s a reminder that at the end of the day, it’s OK to let go of pleasing others, but it’s not OK to let go of yourself and your own dreams. 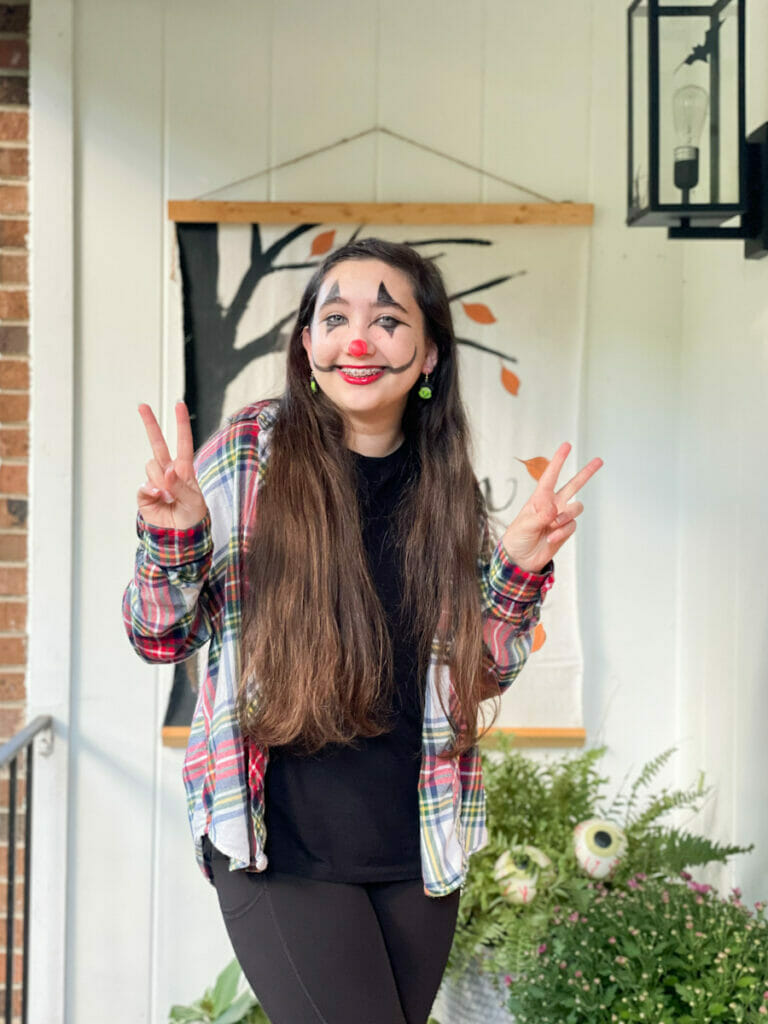 Emmy could not make up her mind this year with what to be, so she waited until the last minute and had no costume. A friend loaned her wings but she wasn’t happy with the makeup she created to go with them. On Sunday, she painted her face in this whimsical and creepy way, dressed in all black with flannel and called herself a scarecrow. I am pretty sure she was a mime. We both decided she was an identity crisis. 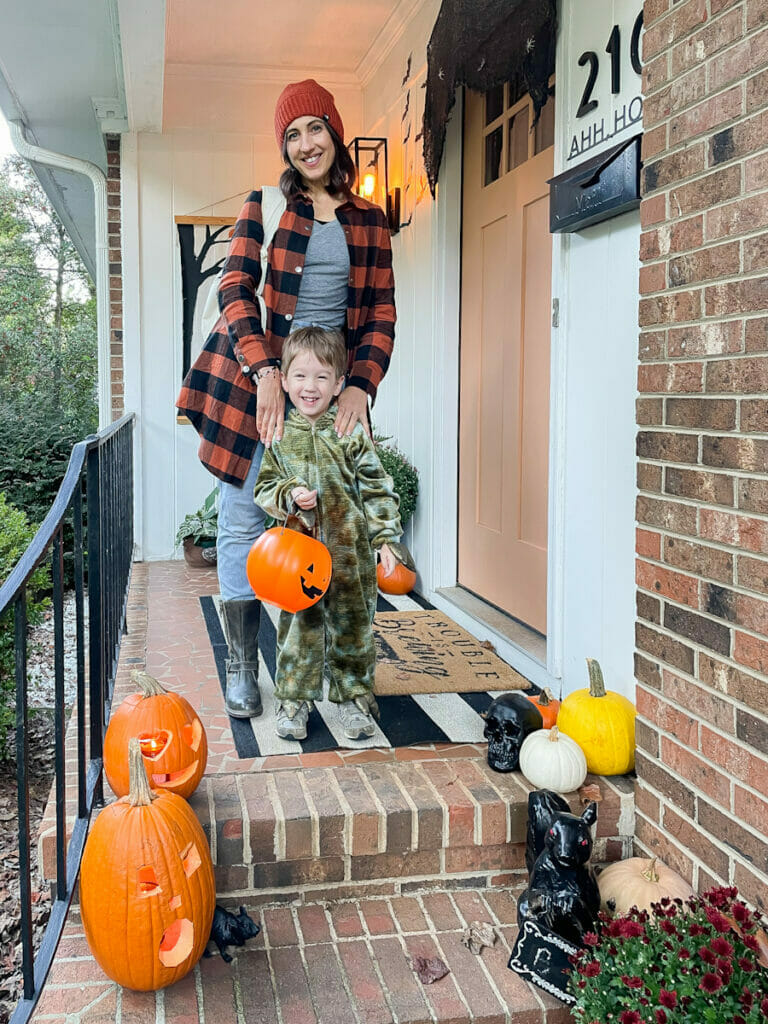 I dressed in the flannel I picked up at the vintage market, mom jeans, black boots, a beanie and attitude. I told people I was a 90s teen, but truly I could be today’s teen or just today’s me because I was int that outfit. Here’s a photo of me being a teen: 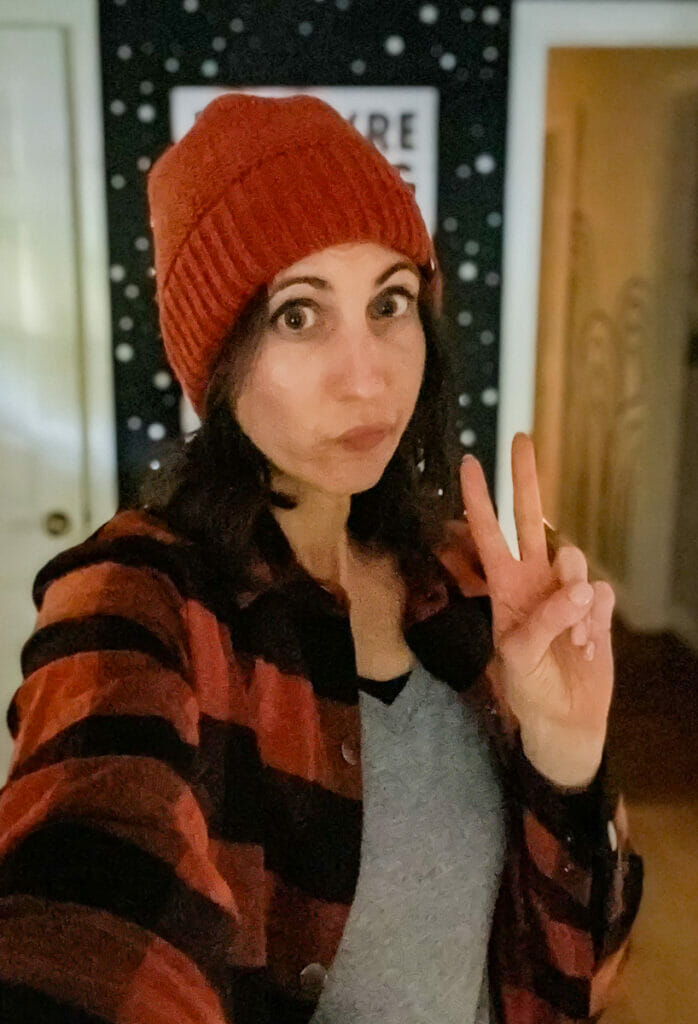 Emmy saw this photo with the peace sign up and asked if I was mocking her. Guess I nailed the teen attitude.

Last year, Wilder had a cold at Halloween and we’d gotten him tested for Covid but didn’t have the results (which were negative) in time to let him go out. That made this year his first big trick-or-treat and he had an absolute blast! Emmy went with friends, Sawyer stayed home and handed out candy, and Chris and I took Wilder around the neighborhood, landing at a friend’s fire pit for cider and snacks. (Chris brought Wilder home to hang out with Sawyer so that we could stay with our friends.) 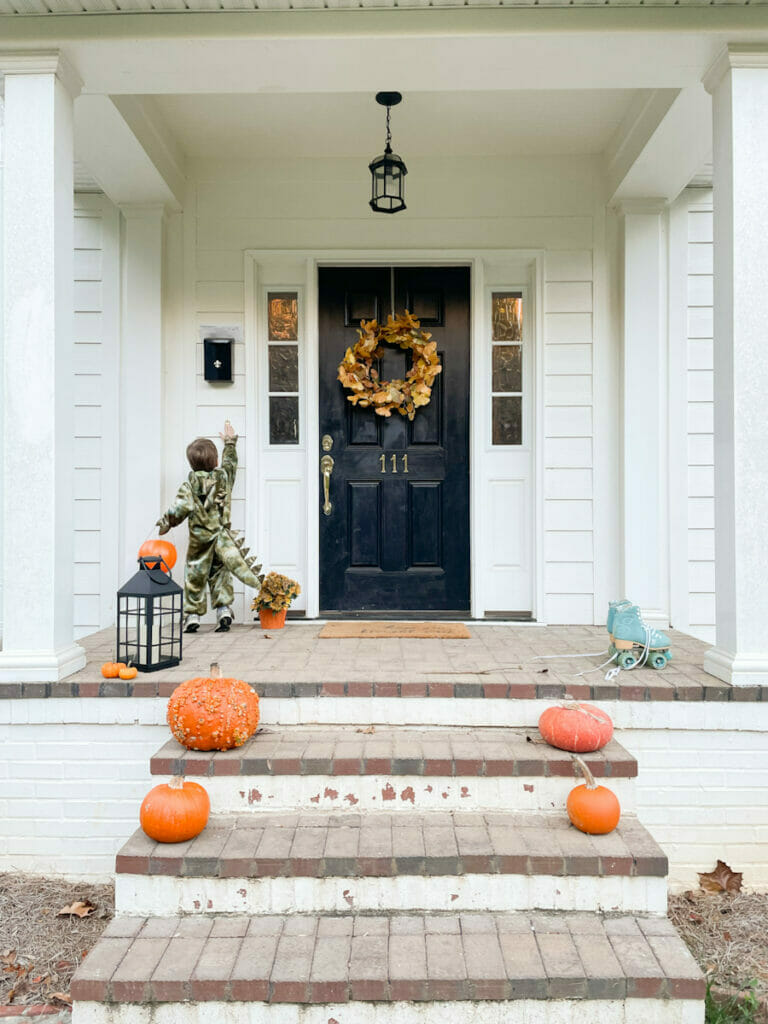 All in all, it was a pretty close to perfect Halloween night. 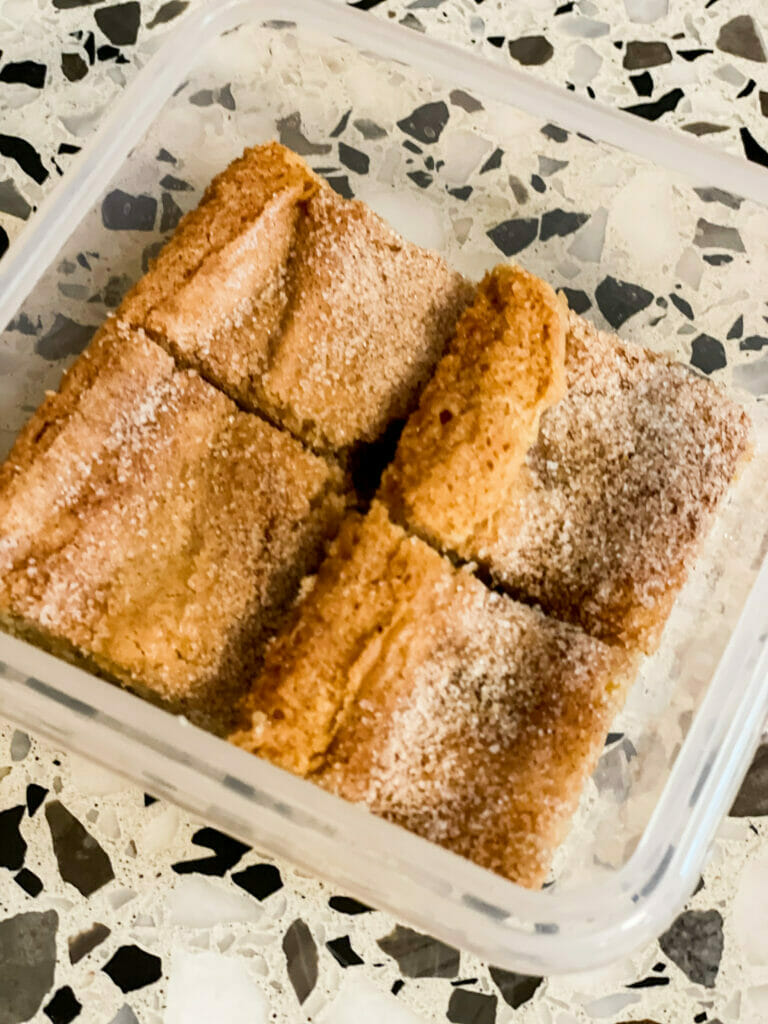 I am so fortunate in that I’ve grown close with some of the moms from Wilder’s class from last year. We try to get together once a month as a group and stay in touch even though Wilder’s no longer in the same class. (They’re going 3 days a week and he is going 5). This past week, I got a text from one of the mom’s (she and I both love to bake and enjoy our confections): “Ok so if you’re friend brought you browned butter snickerdoodle Blondies tomorrow…. Would you say no thanks or sure, I’ll have a bite?”

Obviously, I said yes! The treats are absolutely delicious, but honestly, it just kinda melts my heart that she thought to do that for me. It’s been a hard month since losing Sarah, but I am reminded every day that I am surrounded by fiends who love me and that’s a wonderful feeling.

In other “life’s little moments” I just have to share this one that had Emmy and I cracking up. On the way to Trader Joe’s the other evening, Wilder suddenly said, “I tooted!” We didn’t hear it though, but then he explained, “I had lots of toots, I tooted one by one.” HAHA. So he was back there slipping them out, “one by one.”

Can I end a blog post with writing about flatulence? Damn right, I can. Happy weekend!