Happy Friday! Can you believe we only have two weeks left until Christmas Eve? With everything happening in our life, I am feeling so behind on everything. Wilder also came down with pneumonia so he’s been home a little (but was cleared to go back Wednesday – hallelujah!) and it’s all I can do to stay on top of life, let alone Christmas shopping, mailing, baking, decorating. Frankly, I am ready to light a match to 2021 and never look back. Still surviving over here by finding good in each day and week that passes, but boy am I ready to turn the calendar page. Here’s what made me smile this week! 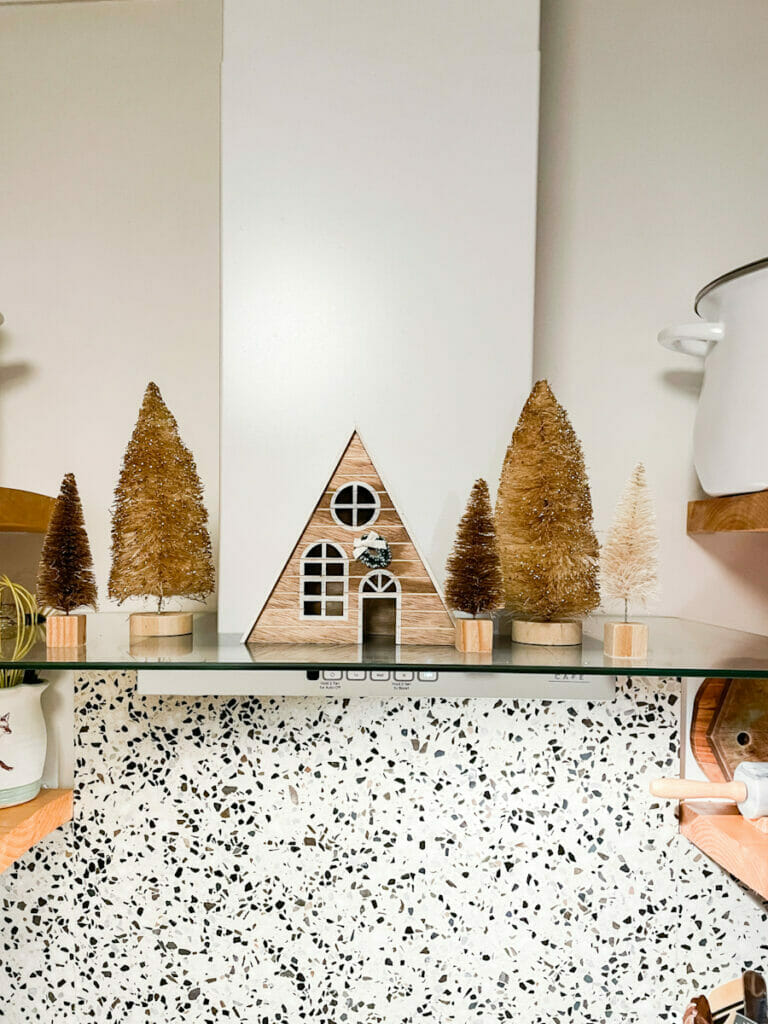 Runs to Target for Humidifier, Comes out with Winter Scene

Monday I took Wilder to the doctor and found out he had pneumonia and would be home from school for a couple of days. We got him antibiotics as well as a humidifier I ordered from Target for pickup. I planned to just run over and grab it, but then Emmy wanted to come because she needed shampoo. Next thing you know, we were perusing the Bullseye’s Playground and tossing amber and cream bottle brush trees in our cart, plus a little A-frame house. All in all, this little scene cost me $12 (I think) and I have zero regrets. Plus, it gave me somewhere to put the damn elf that night. 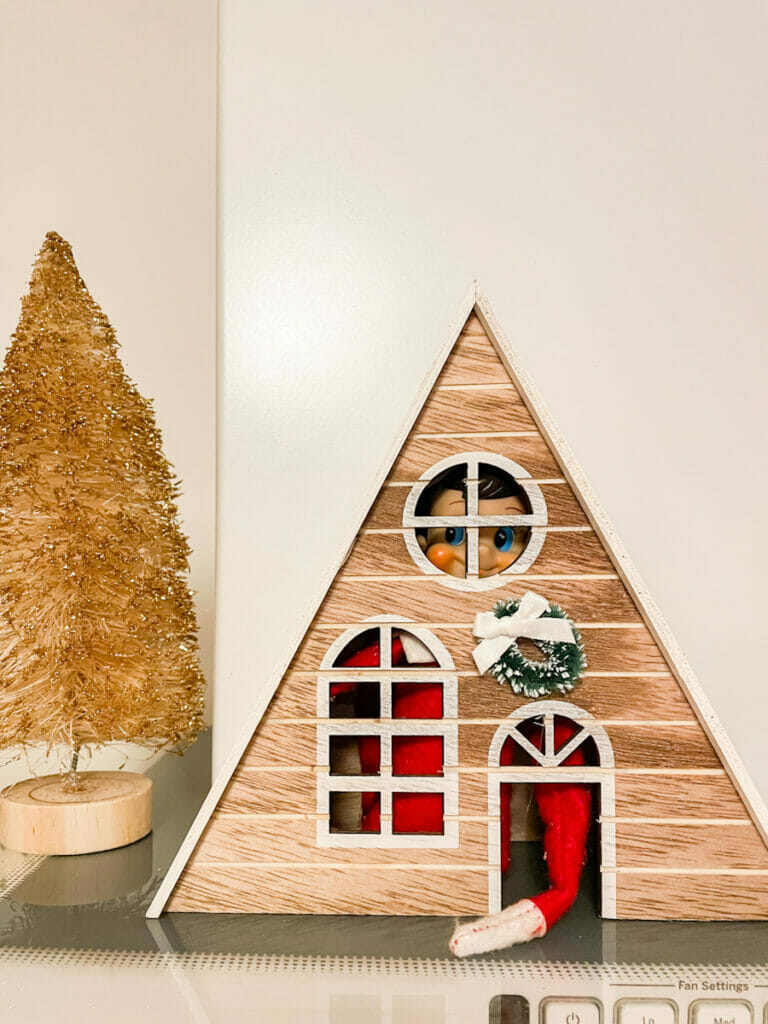 Do you remember the commercial, “The marriage was built to last, but the house was too small?” It reminds me very much of that, or perhaps Alice in Wonderland.

Speaking of the elf, my parents brought me this caricature of myself from when I was a junior or senior in college, studying English. Our elf had a little fun giving me a mustache and goatee. I think it’s a good look and I may go for it. Just let those stray chin hairs come in fully, ya know? 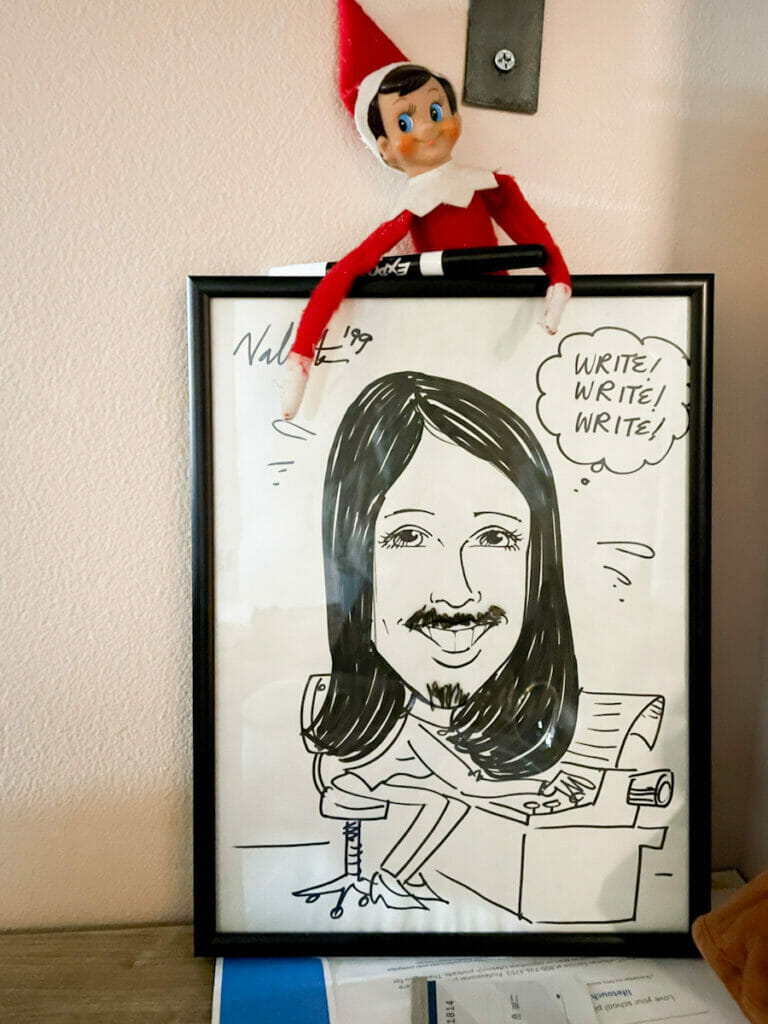 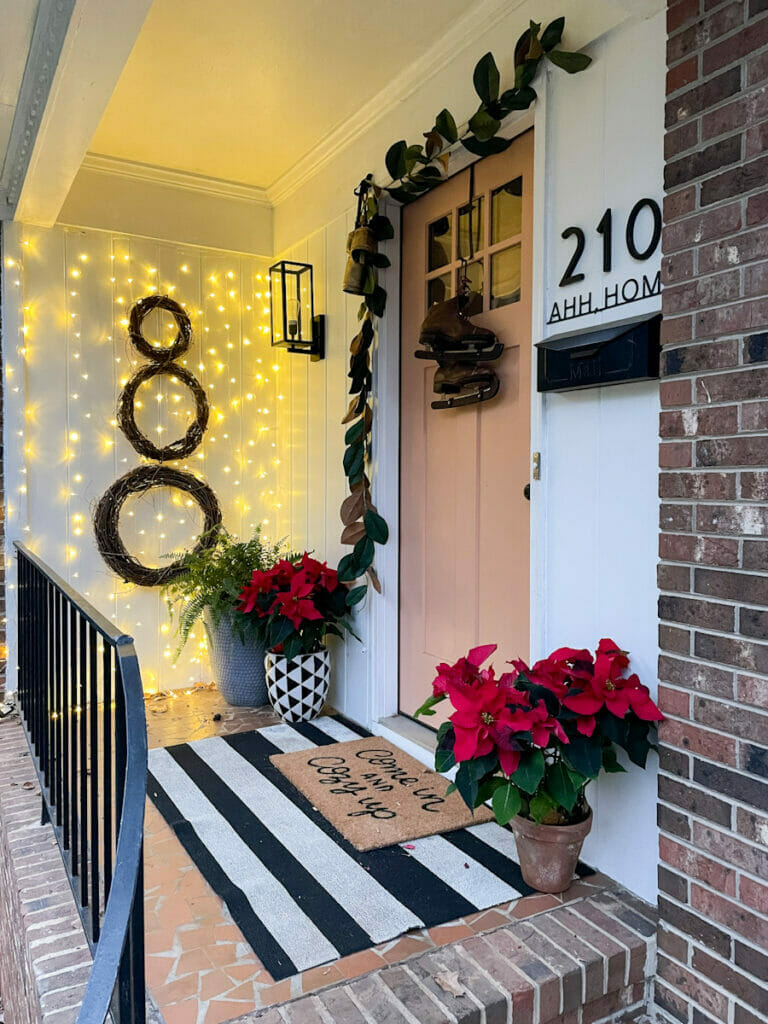 My neighbor told me last weekend that Lowes had poinsettias for 2/$10. On Sunday, when Chris said, “Do you need anything from Lowes?” I replied with, “Why, yes. Yes I do.” Because I needed these. Like the desert needs the rain. 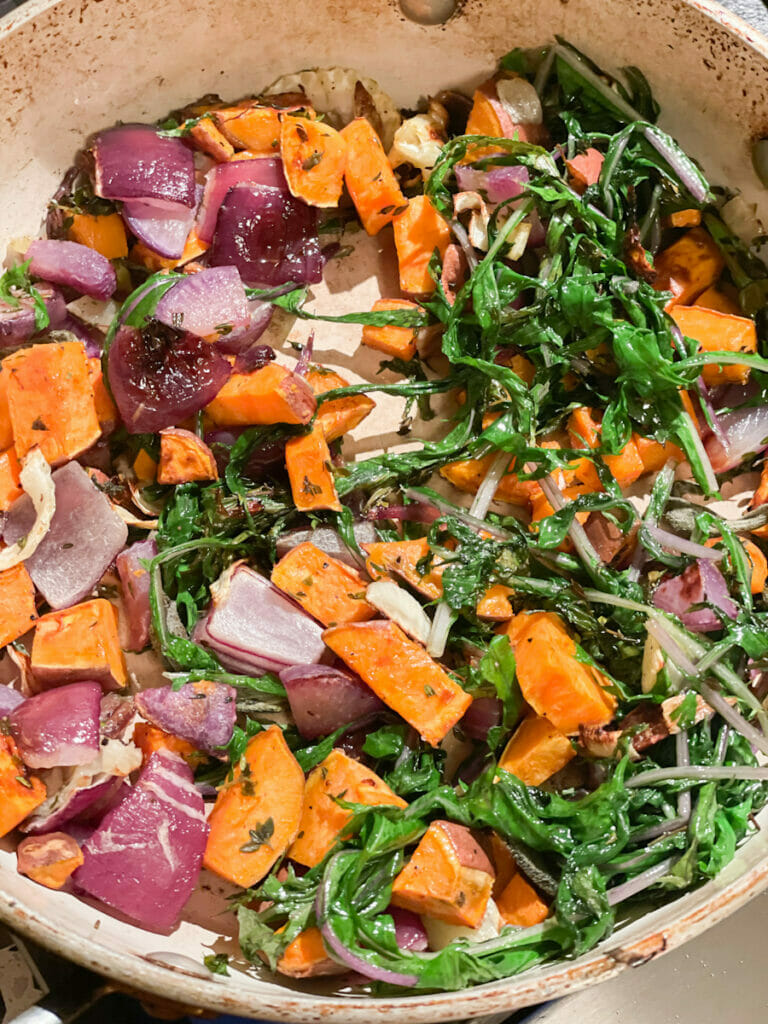 I don’t have a recipe for you this week, but I made one of my own up so I thought I’d share. I am a huge fan of frittatas and using what’s in season. I had sweet potatoes, red onions, radishes and fennel from my local farmer. I’d also picked up some mustard greens from him. I chopped and roasted the veggies in the oven at 400 degrees for 25 minutes, stirring halfway through. Meanwhile, I whisked 9 eggs, 1/2 c. almond milk and salt and pepper to taste. Using an oven-safe pan, I sautéed the mustard greens, added in the roasted veggies, then poured over the egg mixture. Lastly, I added some crumbled goat cheese on top, and baked it in the oven for about 10 minutes – until the eggs were set. It was delicious, seasonal, and super easy. 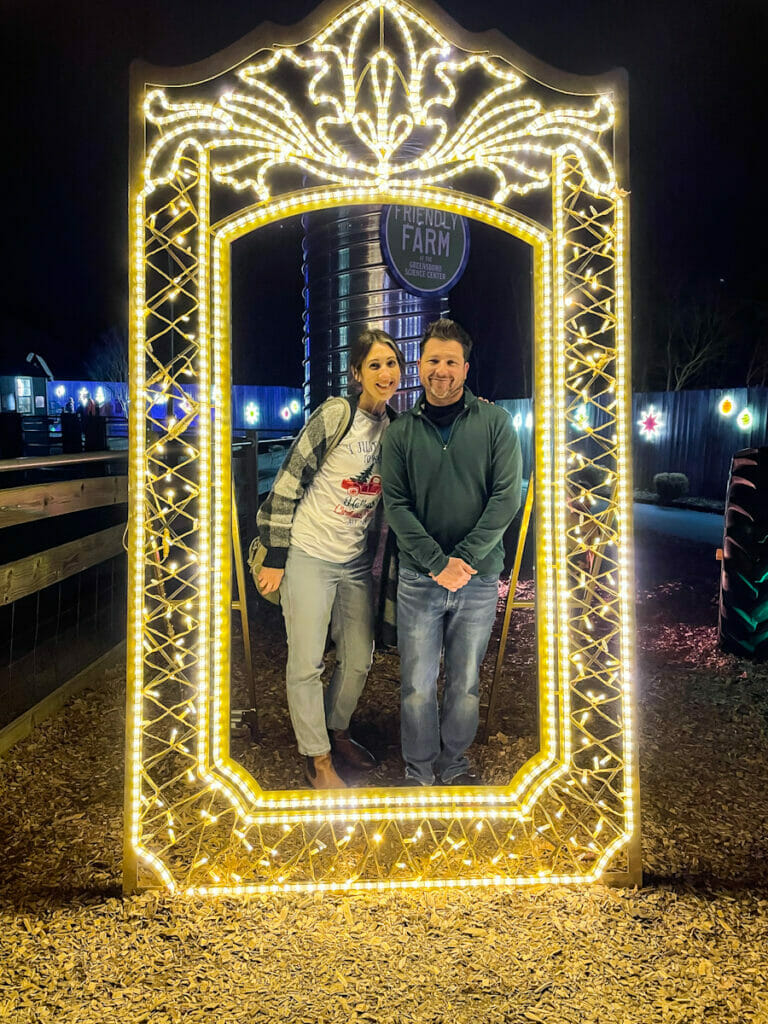 This year was the second that the Greensboro Science Center has decorated for Christmas and opened its doors for Winter Wonderlights at night. I bought my tickets back in September when they went on sale and had been anxiously awaiting our turn, which came last weekend. 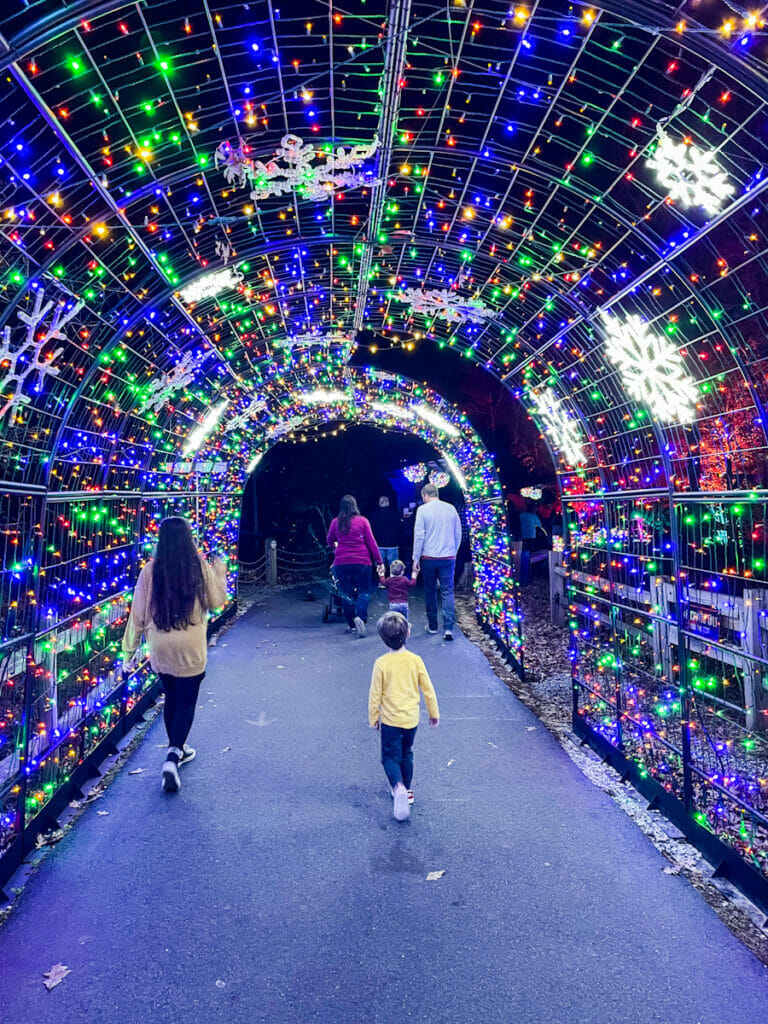 Poor Sawyer was home not feeling well still, but Emmy, Wilder, Chris and I enjoyed strolling through the magic. 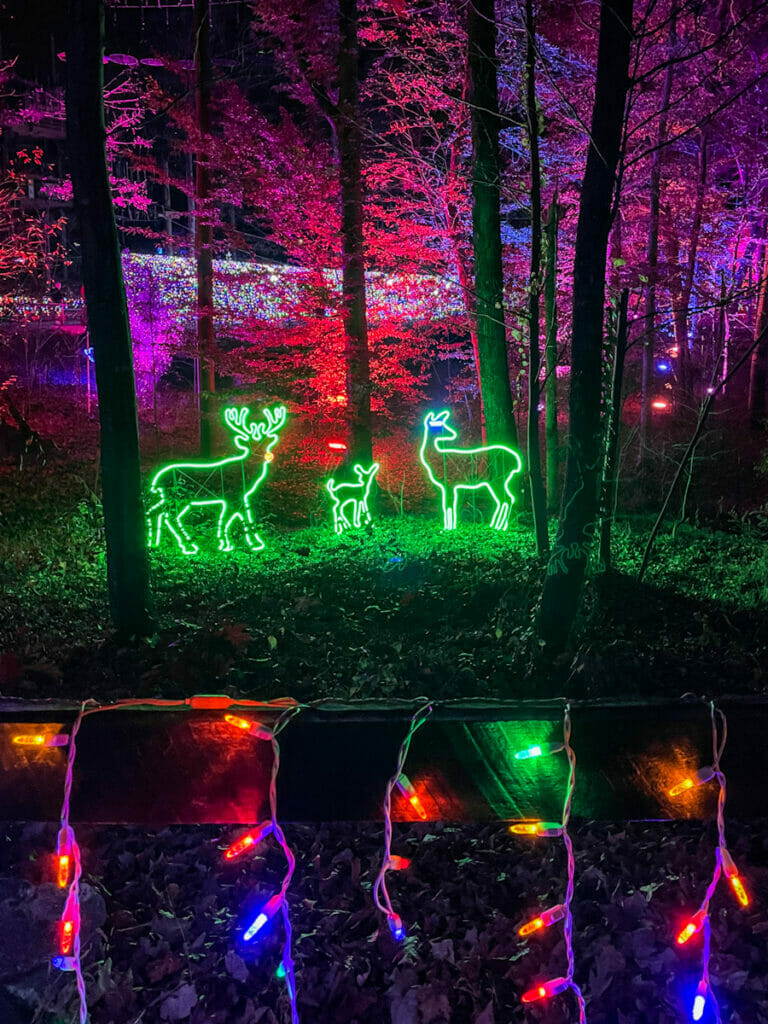 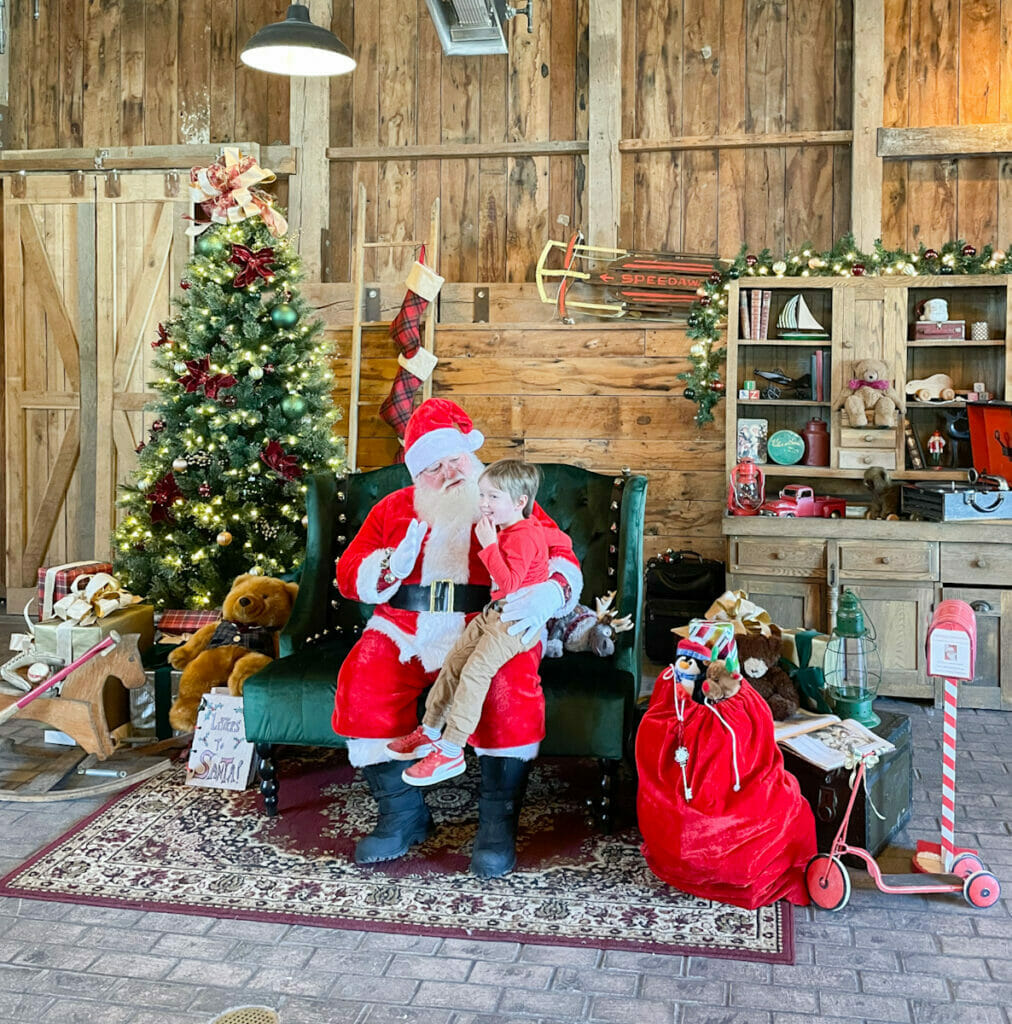 Last year, we didn’t get to see Santa because of Covid, but this year I was able to take Wilder to Summerfield Farms for  a visit with the big guy. I had tickets for this past Wednesday, which thankfully was the day that the doctor cleared him to return to the world. It was, by far, the best Santa experience any of my kids have ever had. Wilder was thrilled to walk right up and chat with Santa, who had him in fits of giggles. As we walked away, Santa said to the photographer with a twinkle in his eye, “That was awesome.” It wasn’t meant for our ears, but I heard it and my heart exploded. This moment was needed on so many levels.

They also had mini-animals, all decked out with antlers. Else and Anna were also on hand, but Wilder was too nervous to take a photo with them, although after we walked away he asked if we could invite them over for s’mores. 😉 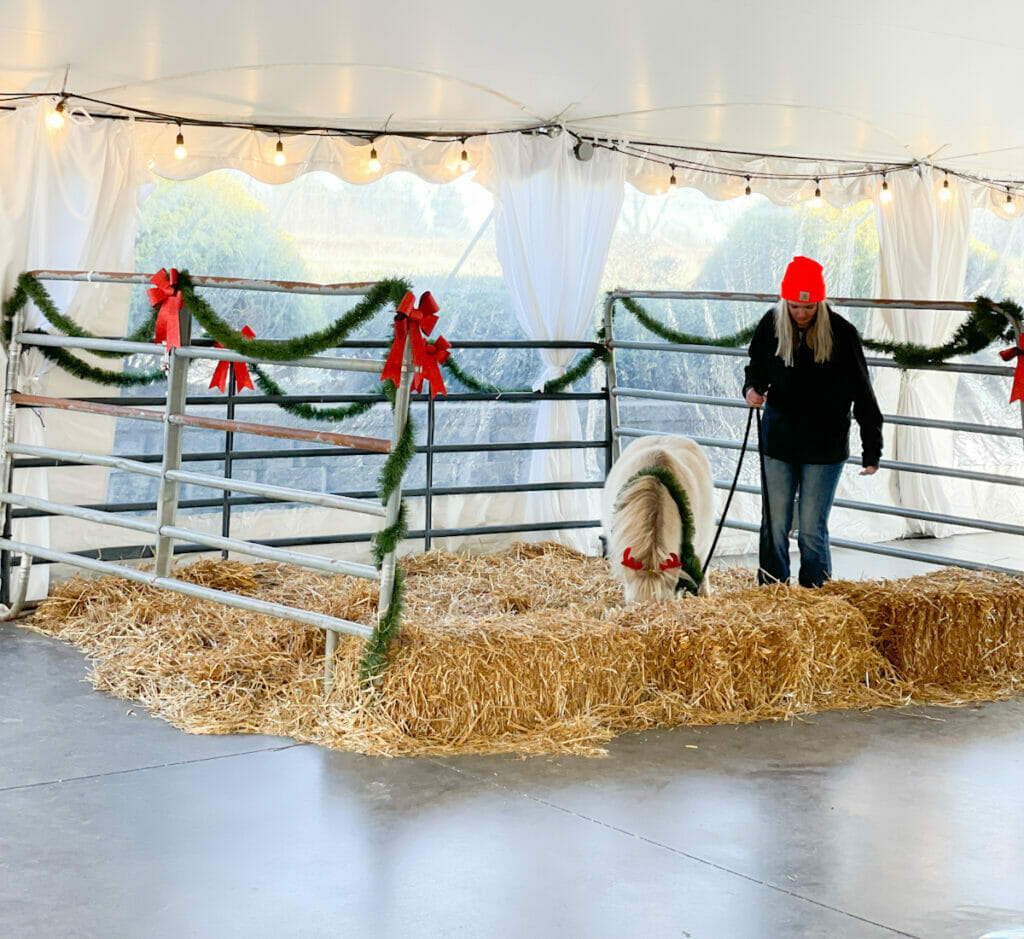 On our way back to the car, he found a dandelion and I just thought this was a sweet moment, so I captured it to remember forever. 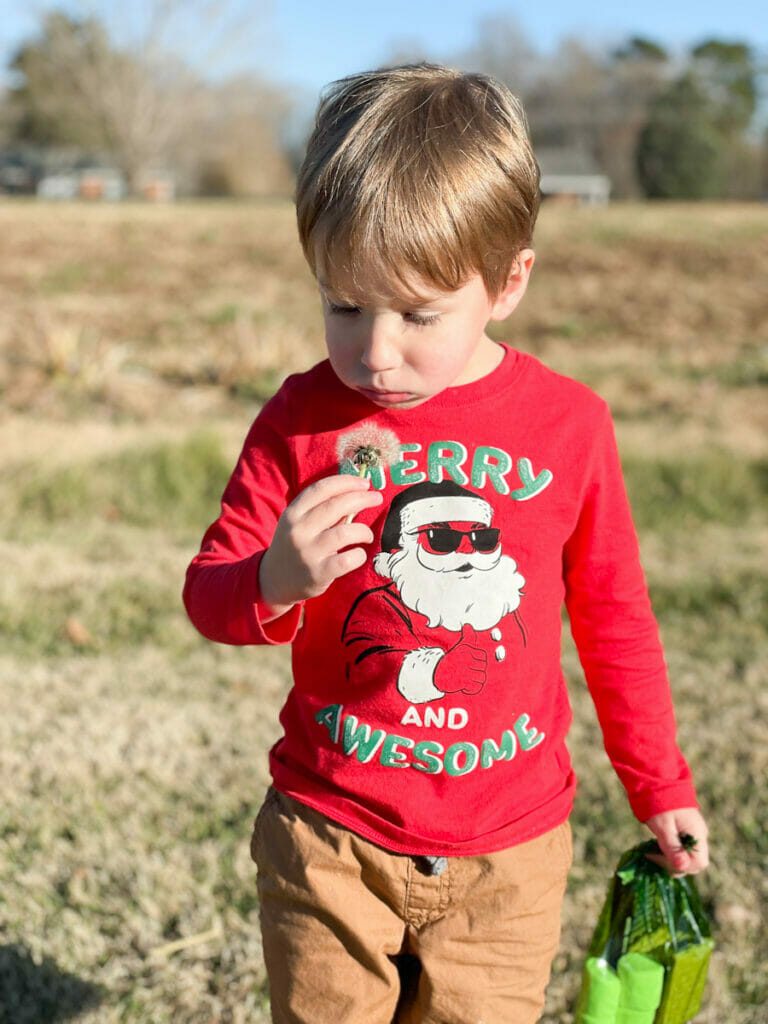 It’s the season of giving and while I shouldn’t be purchasing things for myself, after hearing more about the Get Untamed journal this week on Glennon Doyle’s podcast, I felt like I could really use it right now. She said it’s more than a journal – it’s an intense experiment. And that sounds like what I need. A deep dive into my soul to figure out who I am again and what I want after a year that’s really shaken me. It just arrived and I am saving it for January 1. I also bought a couple of copies to give to a couple of friends and I’m hoping we can kinda work through it all together.

I came across Mix Tape when I was scrolling Netflix the other night and decided to give it a whirl. It’s a really sweet coming of age story about a lonely and awkward 12-year old who lives with her grandmother. Her parents died when she was just two. In this movie, she sets off with two new – also outcast – friends to find out more about who her parents were. In the end, as happens in these movies, she finds out more about who she is. It was a really sweet movie, perfect to watch with your tweens. Check out the trailer: 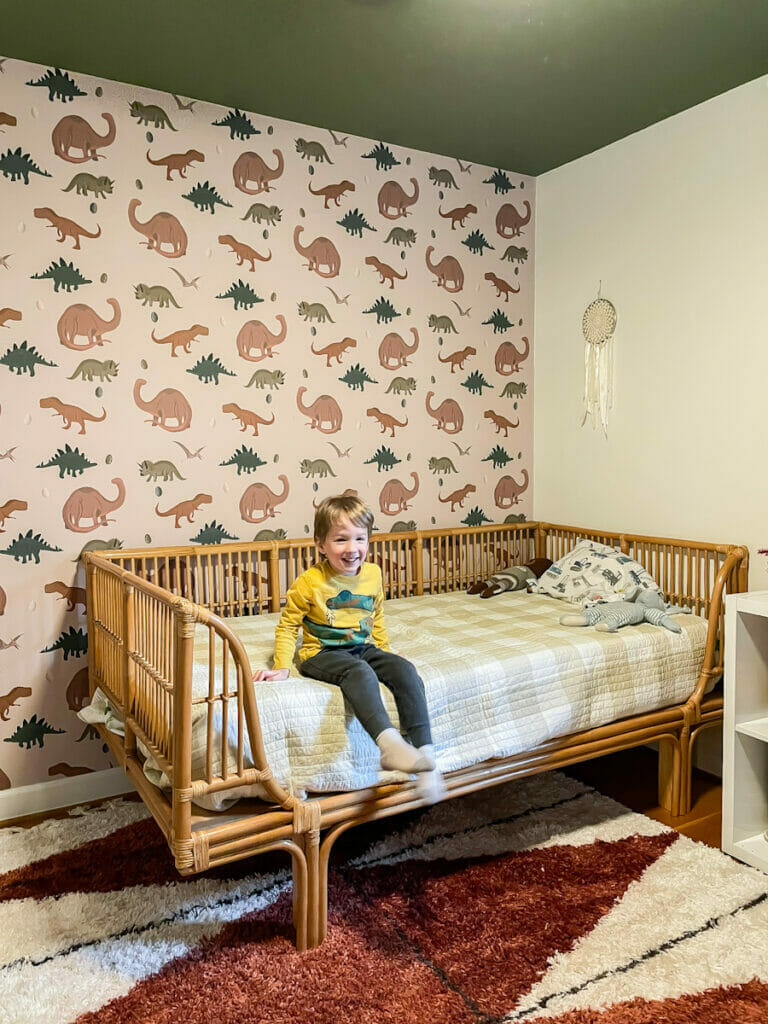 We’ve been making great progress in Wilder’s bedroom and I am almost ready to take some photos and share it! Last weekend, Chris and I put the bed together, which was an experiment in marriage. Wilder, as you can see, is thrilled with his bed and he’s been sleeping quite well in it! (But he insists on using his tiny toddler pillow. Ha!)

Here’s the graphic I shared on Facebook after exiting the room in a fit of rage totally calm manner. Totally calm. 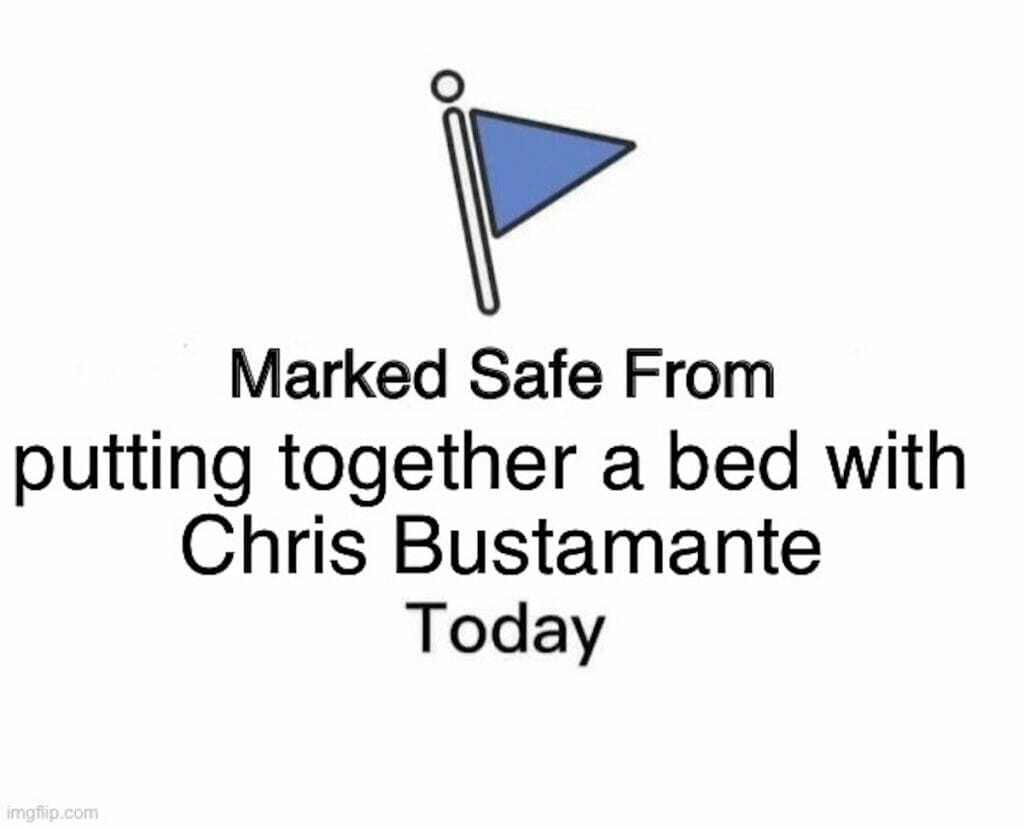 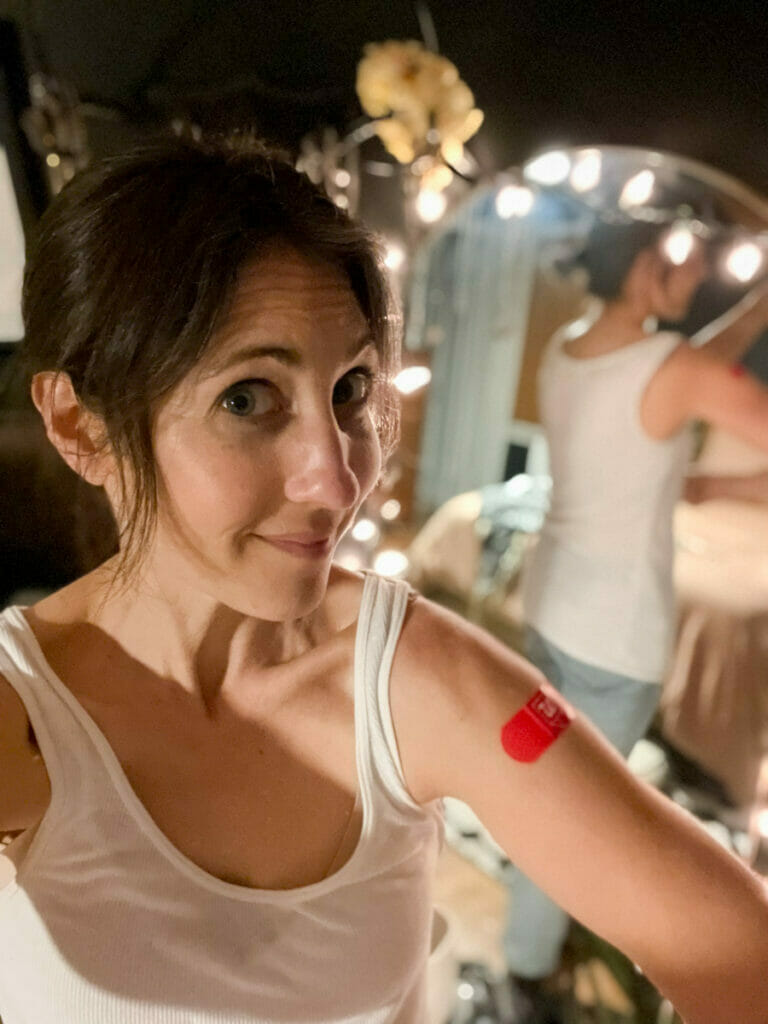 Last weekend, I got my booster shot. I began with Pfizer back in April, so Walgreens stuck with Pfizer. No side effects minus a slightly sore arm the next day, which I used as an excuse to work out less. My kids will be due for theirs soon and Chris is due for his, but we’re rolling! I don’t know about you, but I dream of a world without Covid. I don’t want to go “back to normal” because it wasn’t benefitting all, but I certainly would love a world free from pandemic and all of the worry that surrounds it. 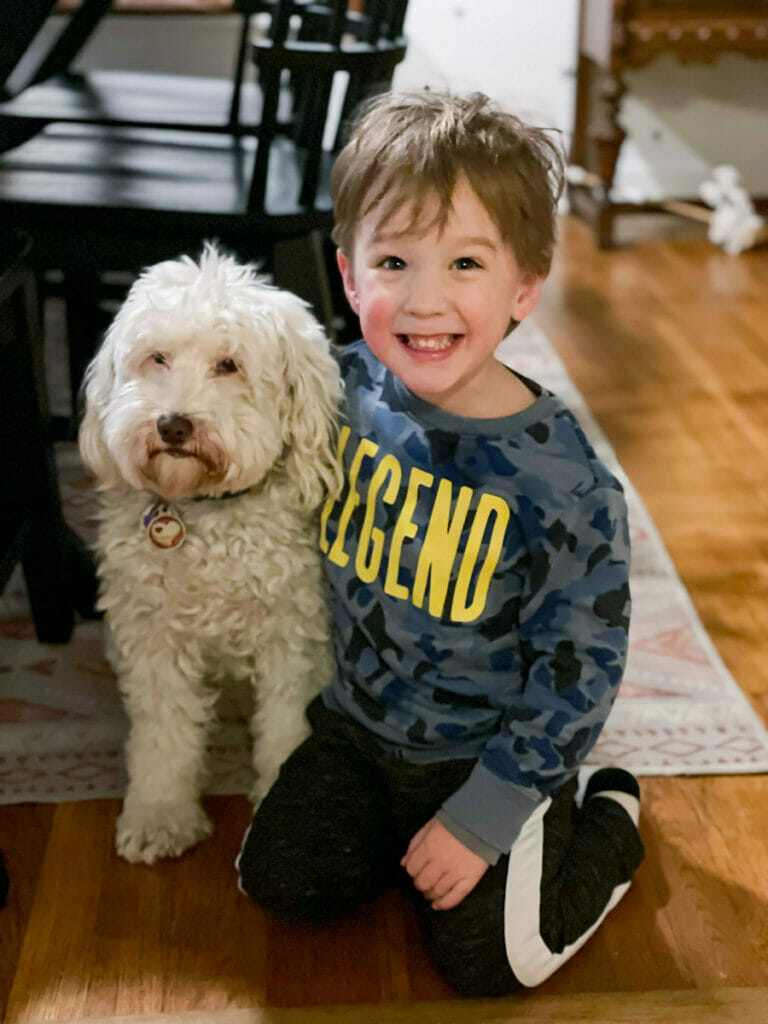 On Monday when Wilder was home with pneumonia, he was still his sunny little self. He and Snowball have a fabulous bond and he’s always asking me to take their photo together. I snapped this and I love how big and happy his smile is. Even though his cheeks are red and his hair’s a mess because he’d just woken from his nap and wasn’t feeling his best, he still had nothin’ but love.

May we all have someone who brings us as many warm fuzzies as Snowball brings Wilder, both literally and figuratively. Happy weekend! We’ve got a good and full one here . . . an off-Broadway show, cookie baking, an artisan market and tree selection are all on the docket!