Dear diary, it’s been three weeks since my last entry. . . three weeks?! After all that time away from the blog, it’s hard to come back. But here I am, so yay! Happy New Year! I hope you had an amazing time ringing in ’22, no matter how you did it. We stayed home, played games, watched some of the NYE shows, indulged on snacks and drinks and went to bed. I made it to 11 and would have easily made it to midnight, but when I thought about it, it was like . . . why? Why stay up late just because I can? So I went to bed and woke on 1/1/22 much better off for it. A lot can happen in a few weeks time, so I’ve got lots of good things to share today. Let’s jump back in to Feel Good Friday. 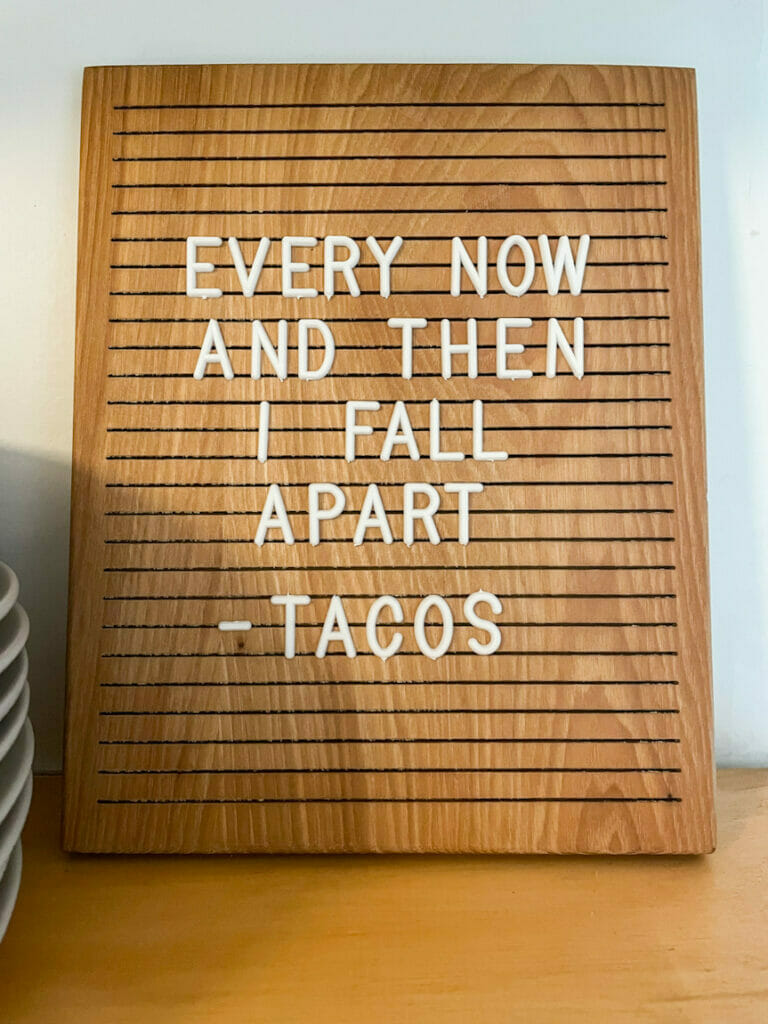 With a new year comes new letter boards. This weekend, Wilder “helped” me change out the boards. He loves playing with the letters and I have him help me sort them so he can work on his letter identification. Basically, creating letter boards that say things like “Trust those who like big butts for the cannot lie” is educational in so many ways. Obviously, he was playing with all of the “R” pieces.

Before the Resolutions Kicked In 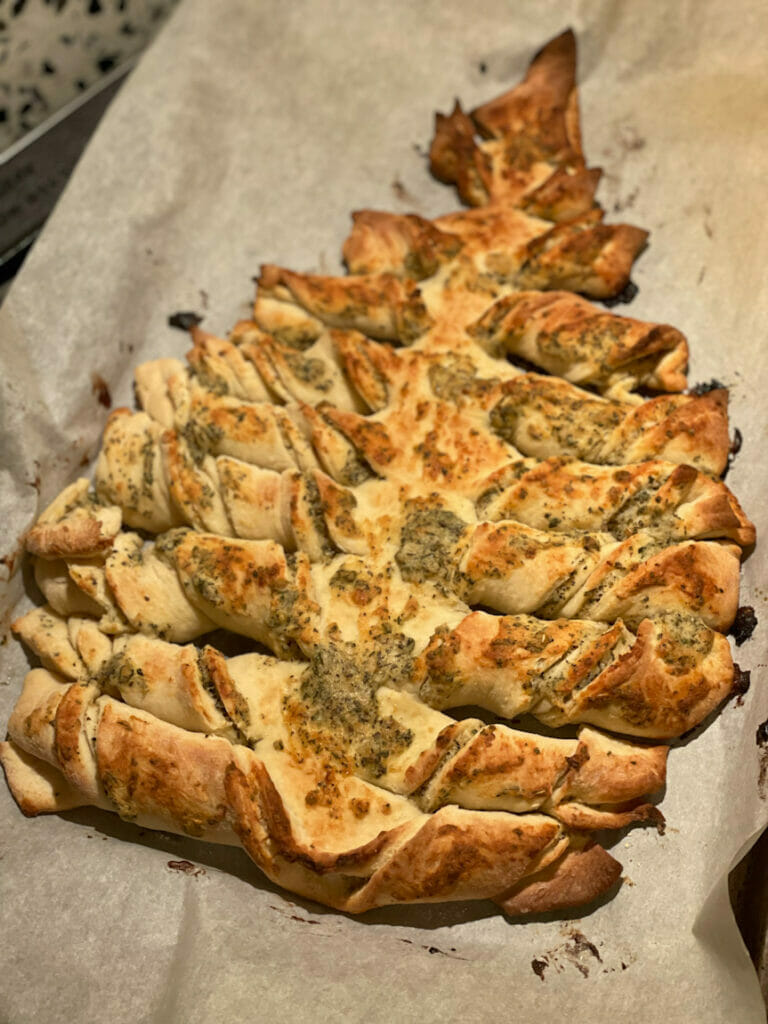 Before the start of 2022 and healthier eating (and dry January for me), we enjoyed some serious bad-for-you-but-oh-so-good foods. On Christmas Eve, it was just us and a neighbor at our house and I wanted to keep things easy and conversational so we opted for a charcuterie board and this pull apart Christmas tree garlic bread. I was really happy with how mine looked until I went back to look at the pictures in the recipe post. I am still happy with my mediocrity, but feeling a little less proud of it. However, it was delicious!

One of my favorite treats from Christmas that my mom used to make each year for her larger than life cookie baskets is these revel bars. When I asked the kids what treats they’d prefer out of the ones I was considering making, Emmy’s face lit up at the mention of these bars. Oatmeal brown sugar crust with fudgy goodness in the middle. Yes, please! Plus, it’s oatmeal, so they’re basically breakfast bars. What did you have for breakfast? Oh just some oatmeal . . .  with butter . . . and brown sugar . . . and chocolate . . . and sweetened condensed milk. But oatmeal. 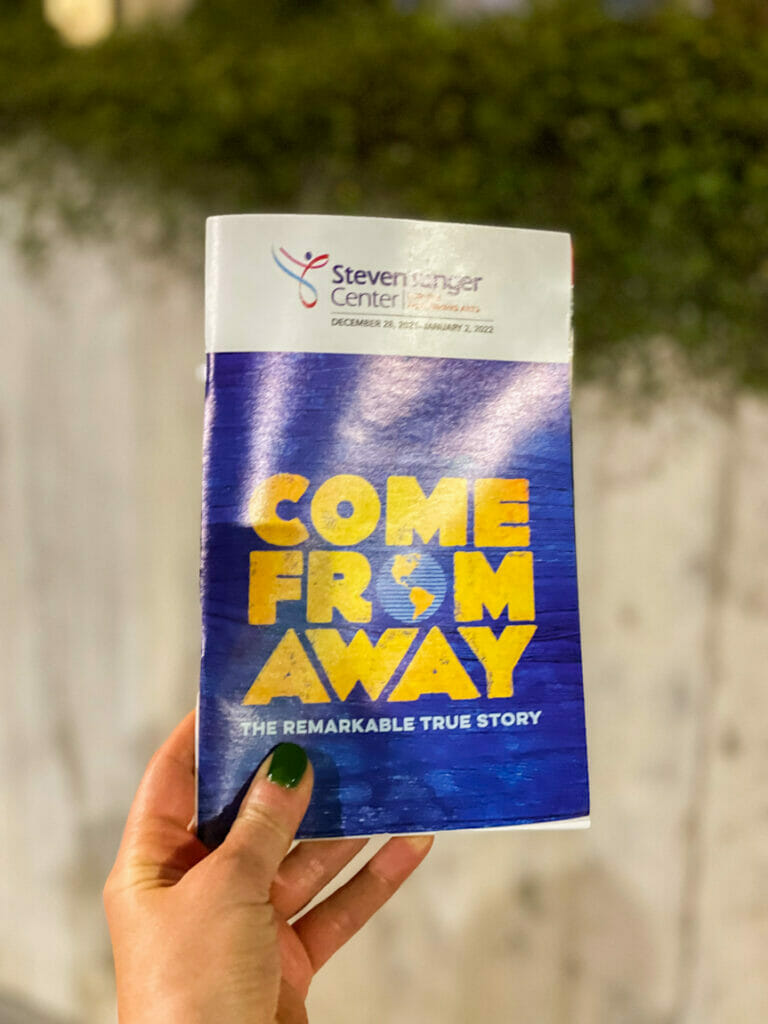 I was invited to the press night for Come From Away at the Tanger Center over the holidays. I brought a girlfriend and we had a grand time! We started the evening with a glass of wine outside on the patio at the venue and then made our way to our seats for the show. They’re very good about making sure everyone is wearing a mask and we had ours on. The play was incredible! I went into it not knowing much about it other than that it’s based on true events surrounding New Foundland and all of the people that landed there after planes were rerooted from 9/11. The ensemble cast was extremely talented and the story was so much more powerful than I could have imagined. I laughed, cried and left the theatre feeling in awe of the human spirit and the resilience we all possess. With the world as it is in this moment, it was exactly the kind of story we needed to hear. This play was actually the third I’ve had the honor of seeing, and is quite possibly my favorite, although it’s hard to compare it to something like Wicked which is so different. I do know that each time I attend a show, I pinch myself that it’s only 7 minutes from my home.

Thank You for Being a Friend 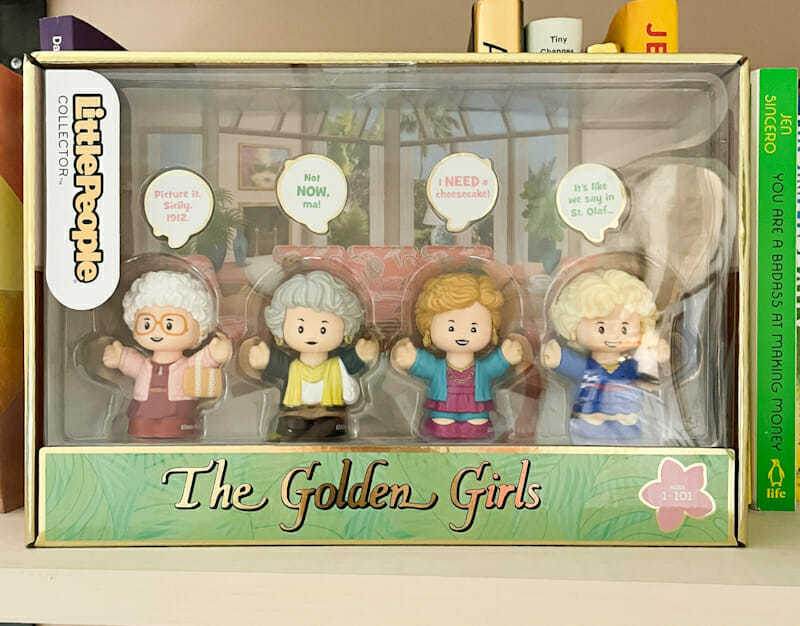 Like many of my friends, I grew up watching reruns of The Golden Girls. They were ahead of their times, made me laugh and demonstrated what it means to be a true friend to another woman. They always had each other’s back and there was rarely a problem that couldn’t be solved by cheesecake. Even though 99 years young is a fantastic life, I was so sad that Betty White didn’t make it to 100. (She would have turned 100 the same day Emmy turns 15.) Anyhow, one of my own golden girls, you know those friends you see yourself growing old with, sent me this set of little people for Christmas and it’s even more special now. And, like many others have said, I smile thinking about Bea, Estelle, Betty and Rue reunited again.

How many books did you read over break, Cassie? Um, none, but I watched a lot of shows. And I thought I’d share them with you because it’s winter and who doesn’t like to lie in bed under a cozy blanket, spooning the remote control?

First up, if you’re looking for a feel good rom-com, check out With Love on Amazon. I found it just through going to the Amazon app one day and it looked interesting. This show does a fantastic job of representing all races and sexualities as well which I am here for. On top of that, it’s cute, funny and the format is unique. Each episode revolves around a different holiday so we travel through time starting with Thanksgiving and ending with Dios de los Muertos. The story centers on Lily and Jorge Diaz, siblings who are “on a mission to find love and purpose.” Check out the trailer:

Another rom-com, Emily in Paris is short, a little cheesy and frilly, but so easy to watch and somehow captivating. It’s not quality television, but it’s easy on my eyes. I watched season one last year over Christmas break, so it seemed fitting to watch season two at this time. Here’s the trailer for S2.

And if steamy naked bodies don’t do it for you like dead bodies, check out Stay Close on Netflix. I have yet to be disappointed in a Harlan Coben show, and this one held true to that. If you like thrilling mysteries with a touch of romance and human interest, you’ll enjoy his series. Bonus: Even though Coben is an American writer, it seems the Brits are the ones who enjoy taking his works to the screen so did I mention the British accents? Here’s the Stay Close trailer: We were gifted Genius Star by our local shopping center recently and it’s SO MUCH FUN! It’s a quick game of strategy and spacial relationships. It’s one that the entire family – even Wilder – enjoys.

Love this drink A Latte 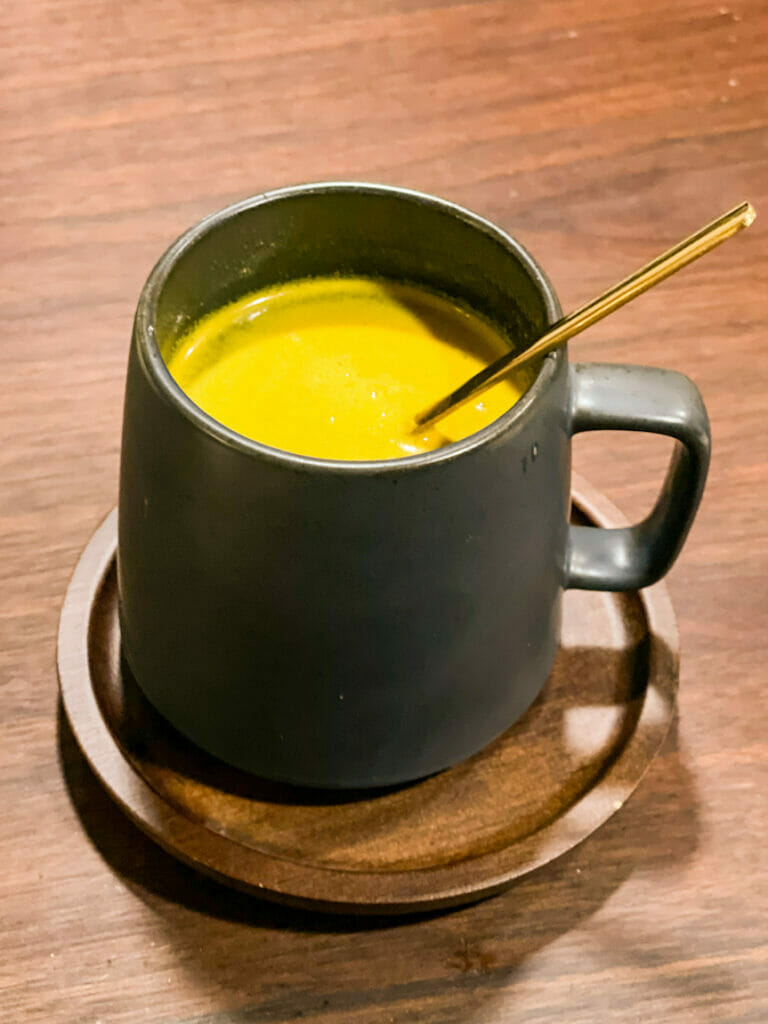 I’ve been wanting to try a warm golden turmeric beverage for a while and have seen so many recipes. But frankly, by the end of the day when I want it, I am way too lazy to make it myself. I came across this powdered turmeric latte that just needs to be added to hot water and voila! I just tried it this week and it’s delicious and has so many health benefits such as fighting inflammation. A friend said she adds a touch of vanilla to hers which I think is a fantastic idea.

Emmy was recently creating her birthday wishlist slideshow presentation (you only think I am joking) and came across some ridiculously expensive skincare. Her text message to me speaks for itself. 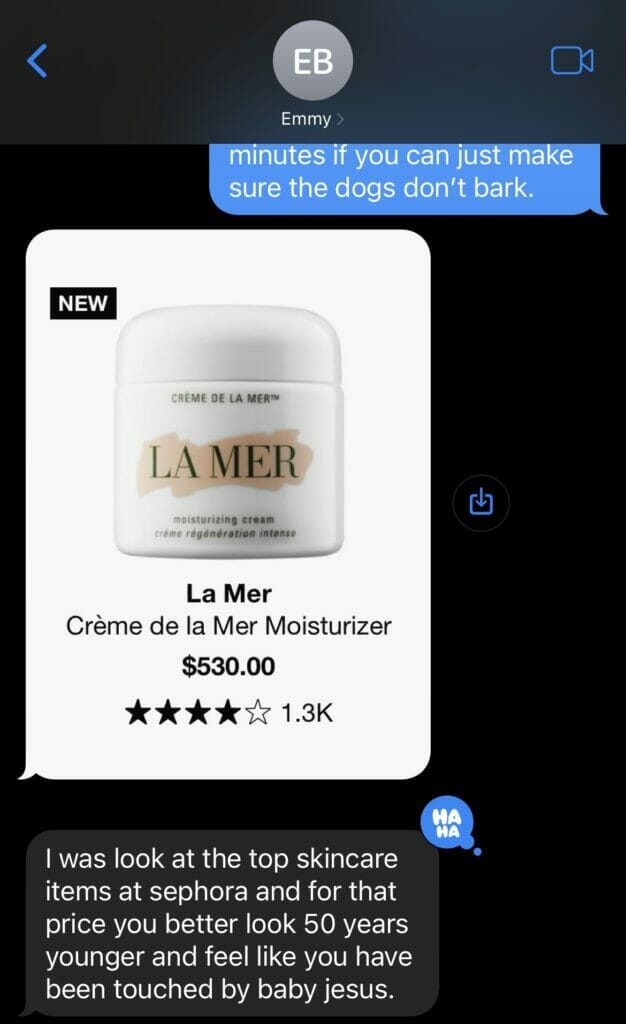 On another occasion, I texted Chris, using talk to text, asking him to pick up Christmas M&Ms. Well, that’s what I meant anyhow: 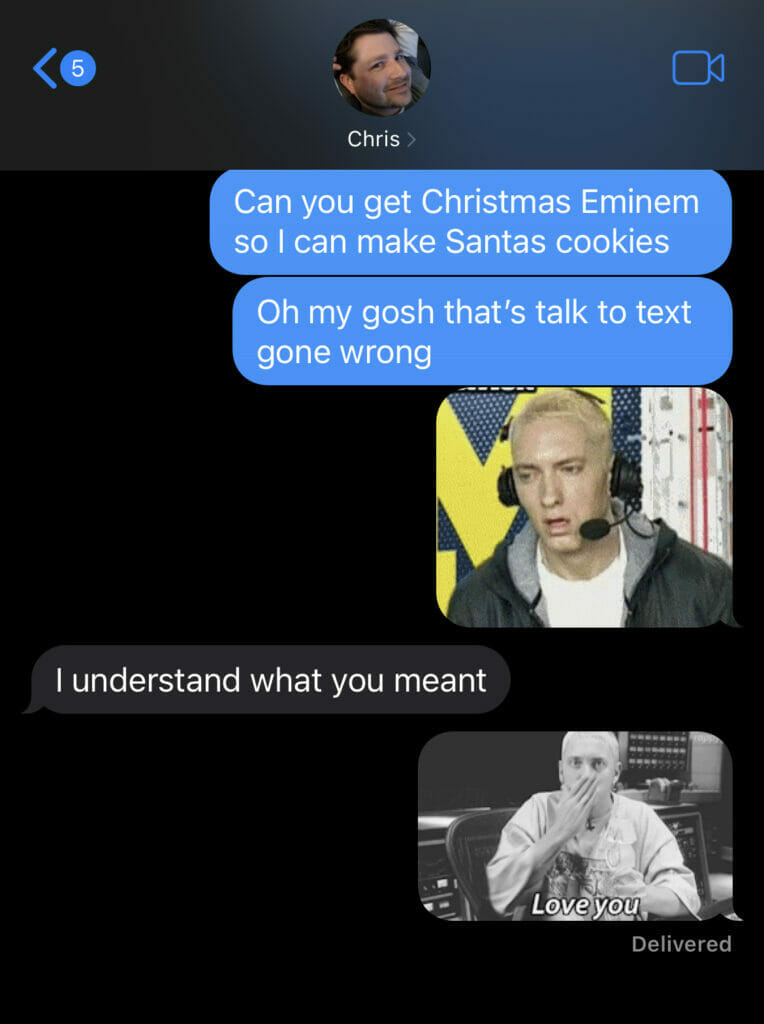 Comfy in the front, Party in the back 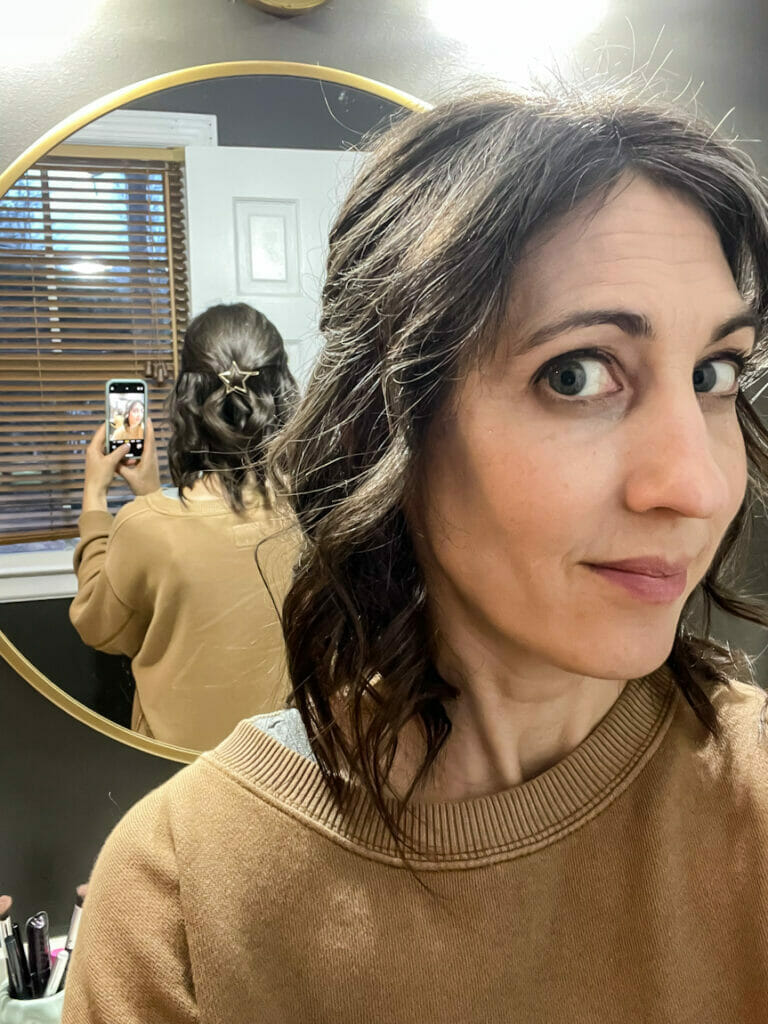 Since we weren’t going anywhere for New Year’s Eve, I wore a comfortable sweatshirt and leggings. However, I wanted a little touch of sparkle so I purchased a set of gold hair accessories on Amazon. It was under $13 for a set of 9 different hair clips. Here’s the star I wore on NYE. I can’t wait to use the gold branches that it included as well. 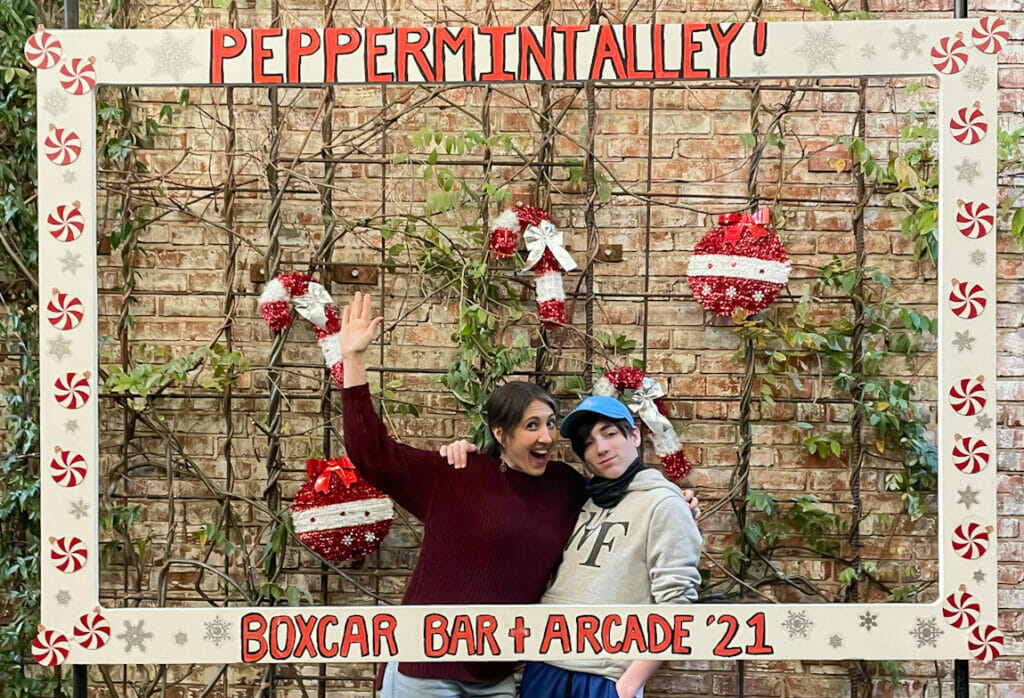 Chris has been working so much, so over the kids’ school break, I got a babysitter one evening and took the older kids out for a much needed and deserved night of fun. We started at Boxcar Arcade and played loads of Skeeball, Pacman, basketball and more.

I lost pretty much every game I played, but I did have a major Pacman achievement which feels rather fitting for me: “Ate most items.”

After that, I took them to dinner at Dame’s Chicken and Waffles. Need I say more? 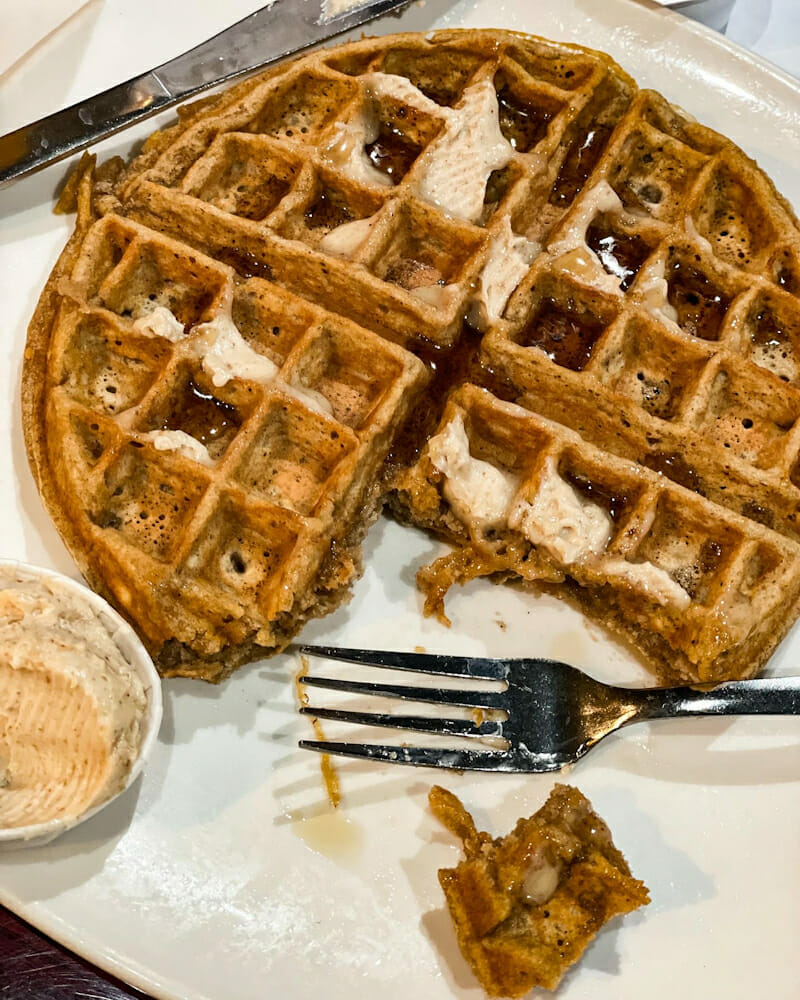 The Sunday after Christmas, I had to go downtown to Scuppernong books to pick up an order. Plus, Wilder was acting pretty off the walls after the excitement of Christmas, so I decided he needed to get out and come with. Then Emmy decided to come because she wanted to browse books. Lastly, Chris said he’d come, too. At that point, I said, let’s get Sawyer and all go then. 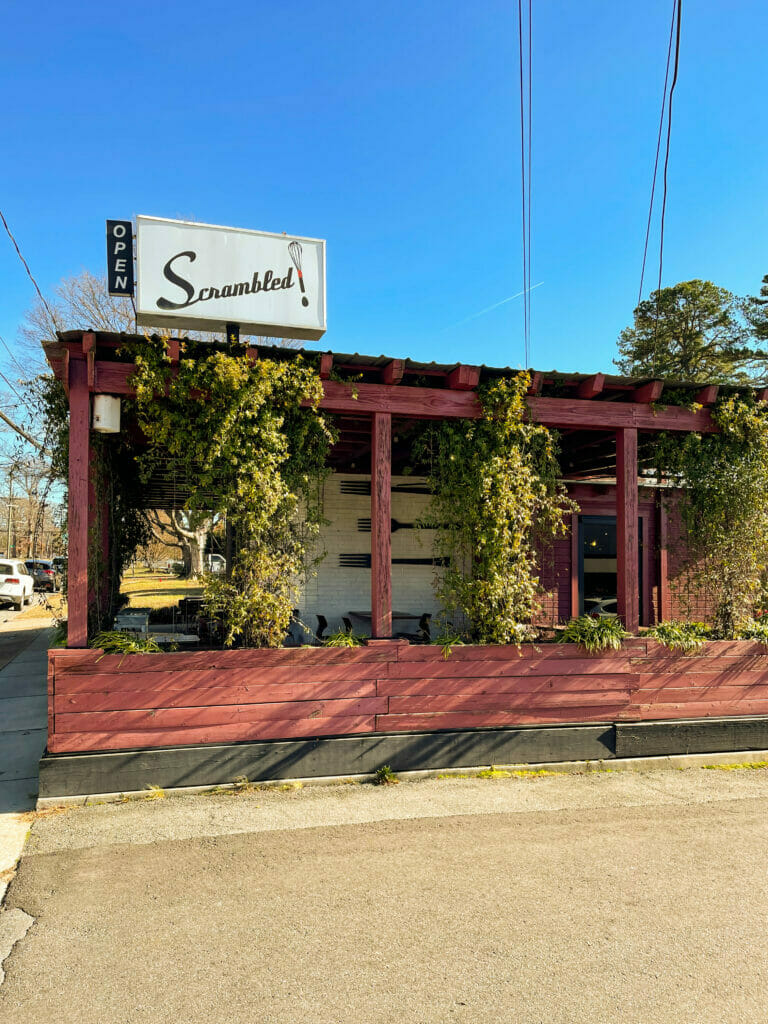 Sawyer came begrudgingly, but it turned out to be an awesome day out for us. We hit the book store, then a comic store at Sawyer’s request. We happened to be near Scrambled, a delicious diner that serves omelettes, scrambles, waffles and so much more. I always love the forester which has mushrooms, tofu and brie. And yes, I got a big honking biscuit. 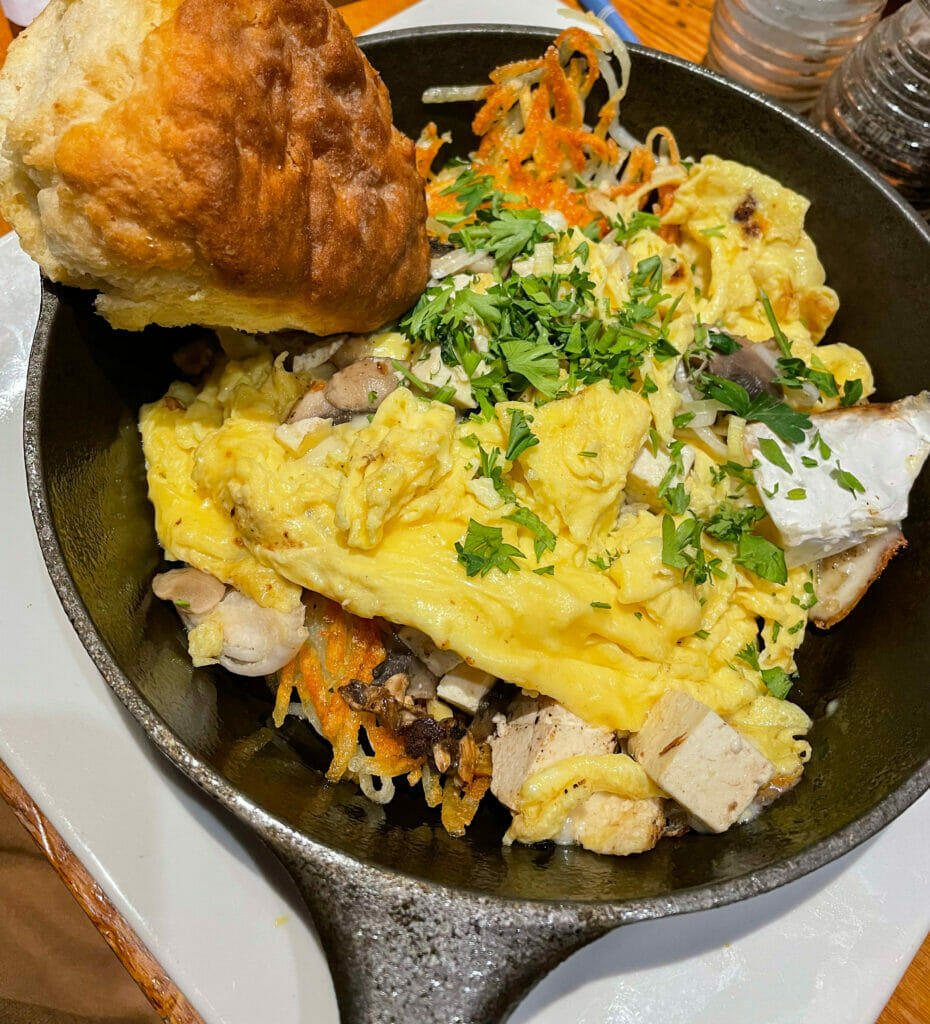 It was one of those unplanned outings that made me realize how badly we need more of that in our lives, especially with Chris having been away from home so much this past year and Sawyer leaving for college in a year and a half. When I made my resolution list, I added “More family outings, aka forced family fun.” Because it was forced – Sawyer had been really grumbly about it before we left, but he ended up having a fantastic time. Isn’t that always the way it goes when you don’t want to go somewhere? It turns out better than you’d imagined?

Well, as you can see, we ended 2021 full of carbs and totally happy – even if the pants were a little snug. I’m starting the new year off by cutting out alcohol and desserts for a month (minus one weekend day), doing a new strength program on my Peloton app, finally cracking open a book and planning to make time again for my own writing. I’ve got some stories on the tips of my fingers, just waiting to be poured out onto the pages. What have you got planned for 2022?