Happy Friday, my friend. Things have – dare I say it – calmed down a little bit this week. And nothing major broke. Yes, that sound you hear is me knocking on my wooden dining table where I sit as I type. While we’ve still been busy, this week was filled with happenings that expanded my mind. Back in 2020, when I was a wee little hopeful pre-pandemic lass, I made a resolution to attend more live shows, speakers and concerts in order to connect with the local community as well as expand my horizons. Then Covid happened. While we’re still dealing with it, I’ve been able to get out there and enjoy some pretty special events and I have a couple to share today – plus a couple of delicious recipes, our new rug now in place and little moments of complete abandon. 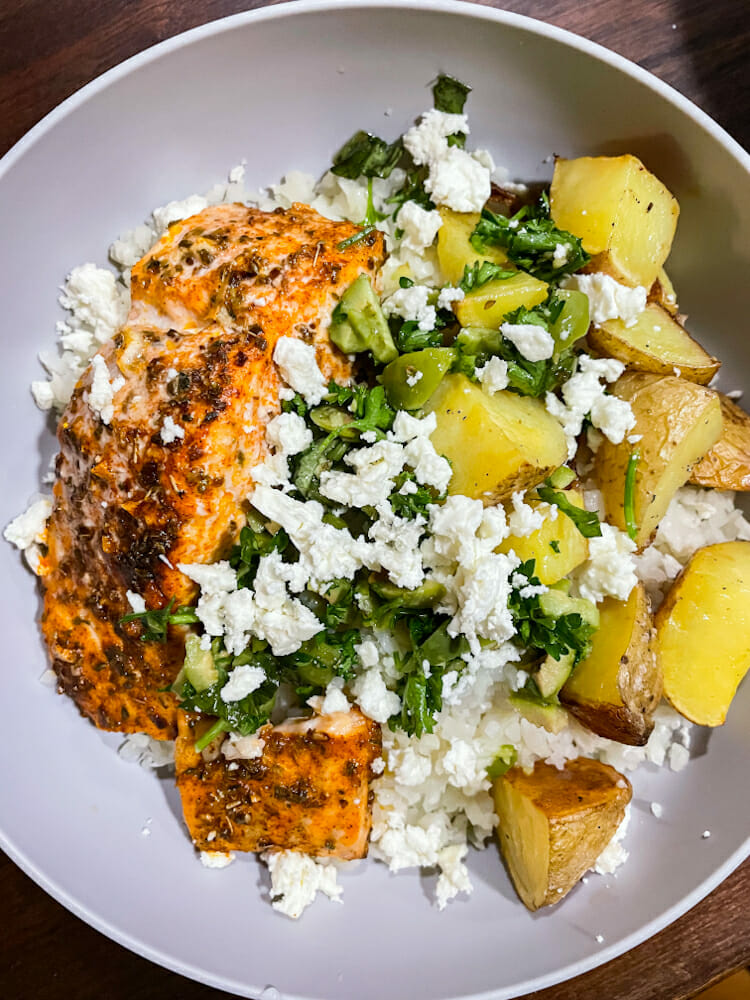 Last weekend, we decided to make salmon one evening for dinner and I knew I wanted a sheet pan meal because they’re just so easy. We settled on this roasted lemon garlic butter salmon with feta, olives and potatoes from Half Baked Harvest and it was delicious! I served mine over cauliflower rice and Chris ate his over white rice. 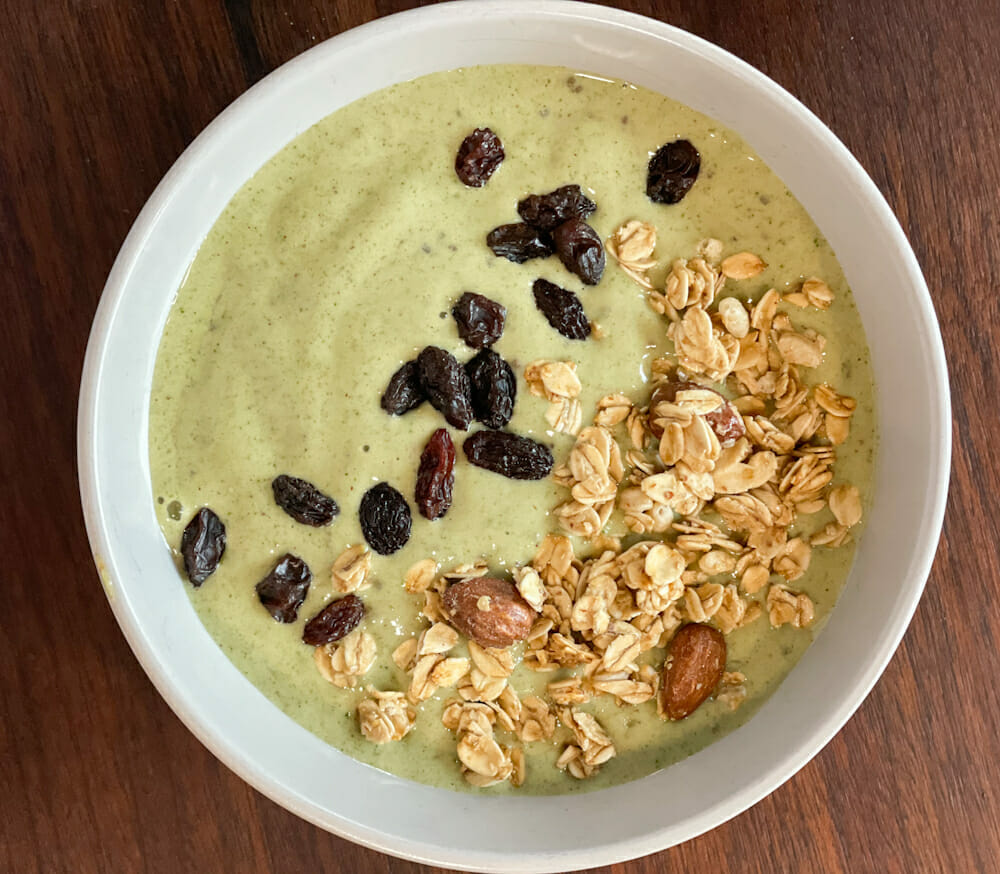 Most mornings, I start my day with a smoothie. Last week, I was feeling a bit experimental so I tried this smoothie bowl recipe. 😉 I added spinach to mine which is why it’s green, and opted for raisins and granola on top because that’s what I had on hand. I honestly think any time dates are present in a smoothie or smoothie bowl, it’s bound to be tasty.

Lastly, I didn’t get a photo of it, but I did a breakfast dinner night this week and made the kids pancakes. Chris was away, so I made myself this sweet potato breakfast hash with eggs and it was healthy, savory and filling. Plus, it’s loaded with vitamins and protein. It was easy enough that I’ll make it again when I’m on my own for dinner. 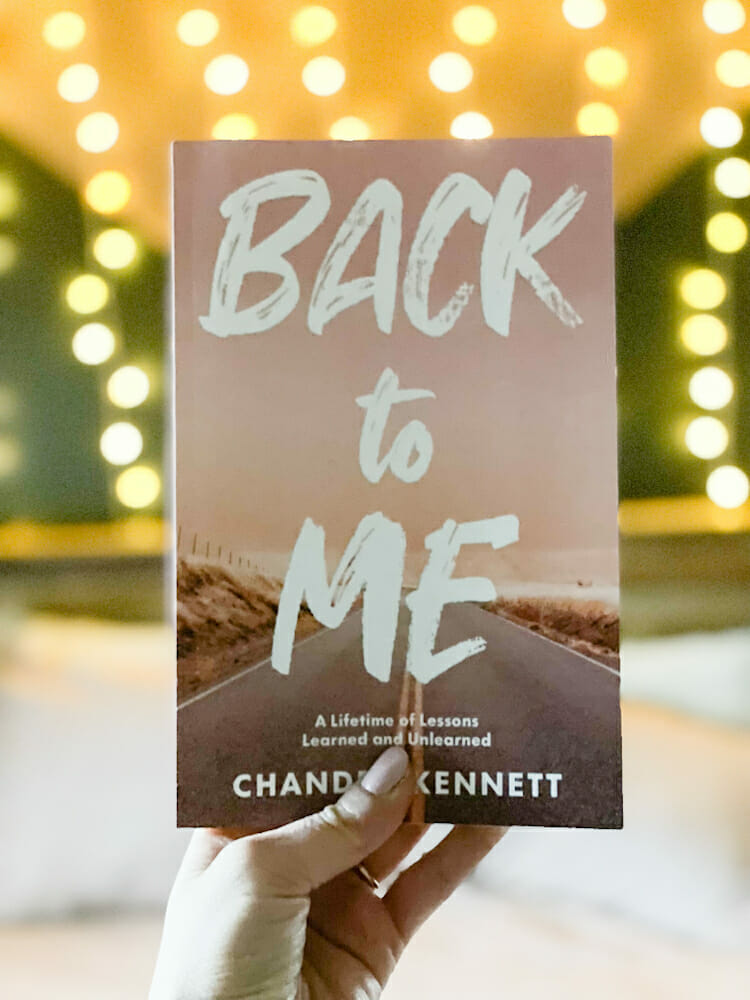 You guys, one of my very best friends in the world – who started out as my coach and someone who played a huge part in me learning to live into myself and trust more – wrote a book!!!!! Back to Me is an autobiographical account of how Chandra Kennet found her way to her true self after years of hustling and pouring from an empty cup. If you’re feeling out of alignment with who you know you are or you’ve lost sight of who that even is, this book is a must read! It’s a super quick read and an honest account. (Trust me, I know!)

Last year I read Tarryn Fisher’s The Wives, a thriller that was interesting enough if a little far-fetched. The Wrong Family was another interesting and far-fetched read. It kept me guessing, so I finished it quickly. However, I will say that I struggled to like or connect with any characters. But perhaps that was done intentionally to show how we’re all pretty flawed as humans.

Last weekend, Sawyer said, “Mom, there’s a new show on Netflix you might like. Actually I found it because I was logged in as you and it was recommended.” That show was Murderville, starring Will Arnett. We watched a couple episodes on Saturday with our teens and it is hilarious! It’s sort of spoofy and each episode involves a murder to be solved and a guest star who is 100% improvising. The first episode featured Conan O’Brien and the second Marshawn Lynch. Both were amazing! The episodes are just 30 minutes each and, unless you are dead inside, you will laugh. Check out the trailer:

Are you experienced? Now I am 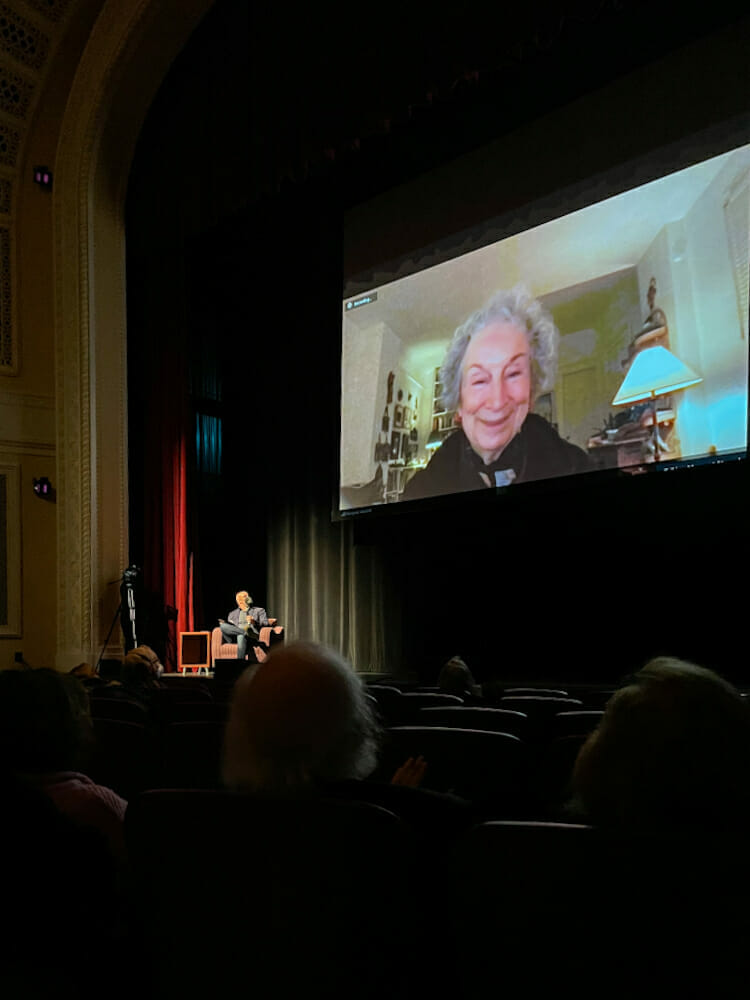 Last summer, I was working at my job when an order came in for sponsored content for the UNCG Concert & Lecture series. When I saw that Margaret Atwood was going to be speaking, I texted my great friend Kirby and invited her to join me. We excitedly bought our tickets. Shortly after, it was postponed due to Covid and rescheduled for February 6, 2022. After a long wait, a couple weeks before the show, it was announced that Atwood would be appearing via Zoom due to Covid. We were disappointed, but still wanted to go to have the evening together. Well, let me tell you, it did not disappoint! While Atwood’s poetry and prose are serious works, in person, she’s adorably witty. She had us all cracking up with her humor. Despite being streamed in, Margaret Atwood was a breath of fresh air and I 100% enjoyed the experience and am ready to see more! Currently considering attending the Daveed Diggs show. And can we talk about the Indigo Girls coming next year to perform with the GSO symphony!!! 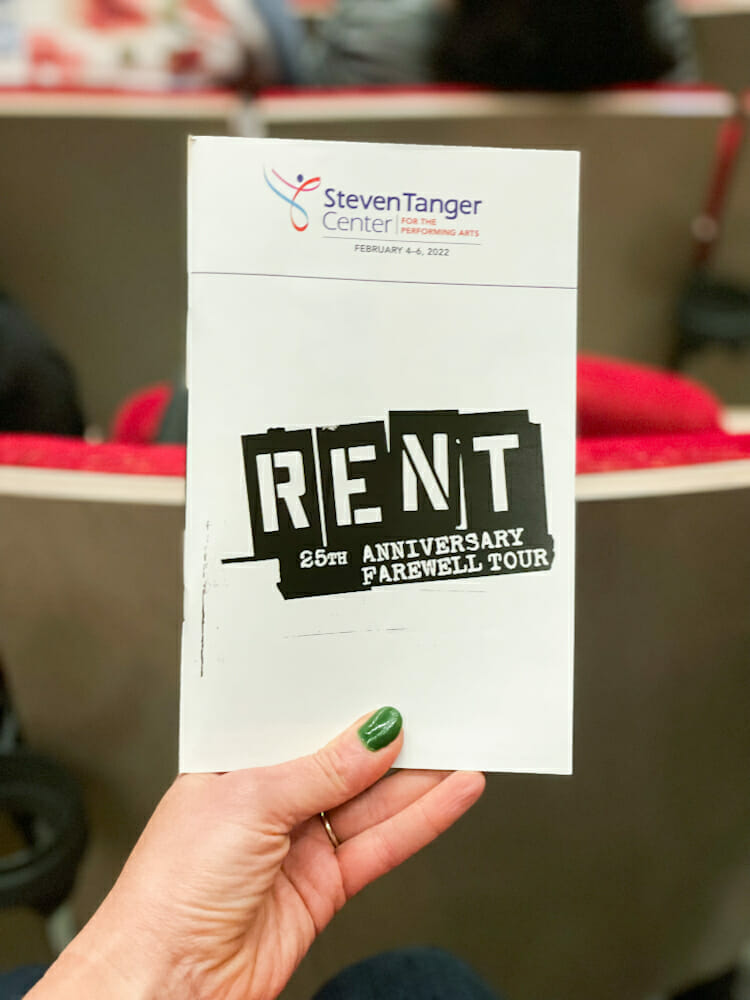 Another experience we squeezed in was catching RENT’s 25th anniversary farewell tour. Neither Chris nor I had ever seen it and the tickets were relatively inexpensive at our local venue. I told Chris, “I’m going, but it’s up to you if you want to join me. If I don’t go now, I will never get to see this show live.” So off we went! He made it home just in time Friday night to catch an uber downtown. It was hectic and we really did jam it into our weekend, but I have zero regrets because it was phenomenal. We’re very lucky to have the Tanger Center so close. In just a couple weeks, we’re headed to The Lion King because I was invited for press night. Gotta love when that happens! And I also have tickets to see a Simon & Garfunkel musical in March. I really want to soak in all of the experiences I can and witness live performers. I am so awe-inspired because I know that when they are on stage, they are channeling something greater than themselves, and that is powerful.

Pulling out the rug 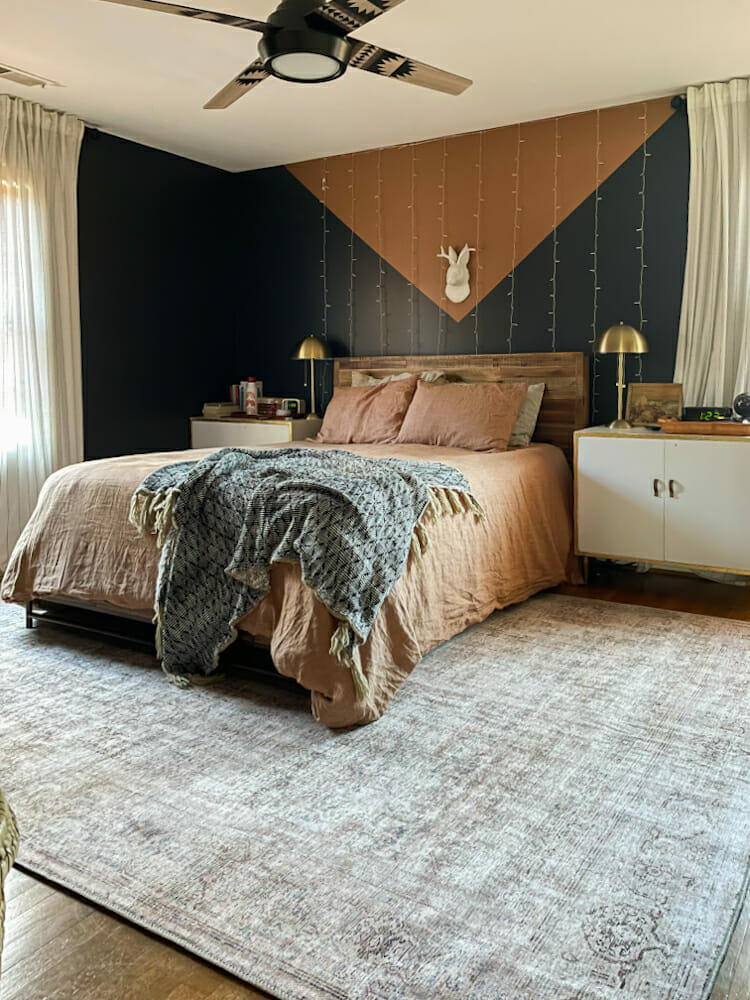 As you can see, our new rug arrived! It’s actually sandier than it appears in the photo. For some reason it is reading more gray in photos, but it’s a sandy earthy color that is so perfect. And it’s much flatter so no more cleaning dog junk out of shag carpeting. 😉 And here it is with our string lights on: 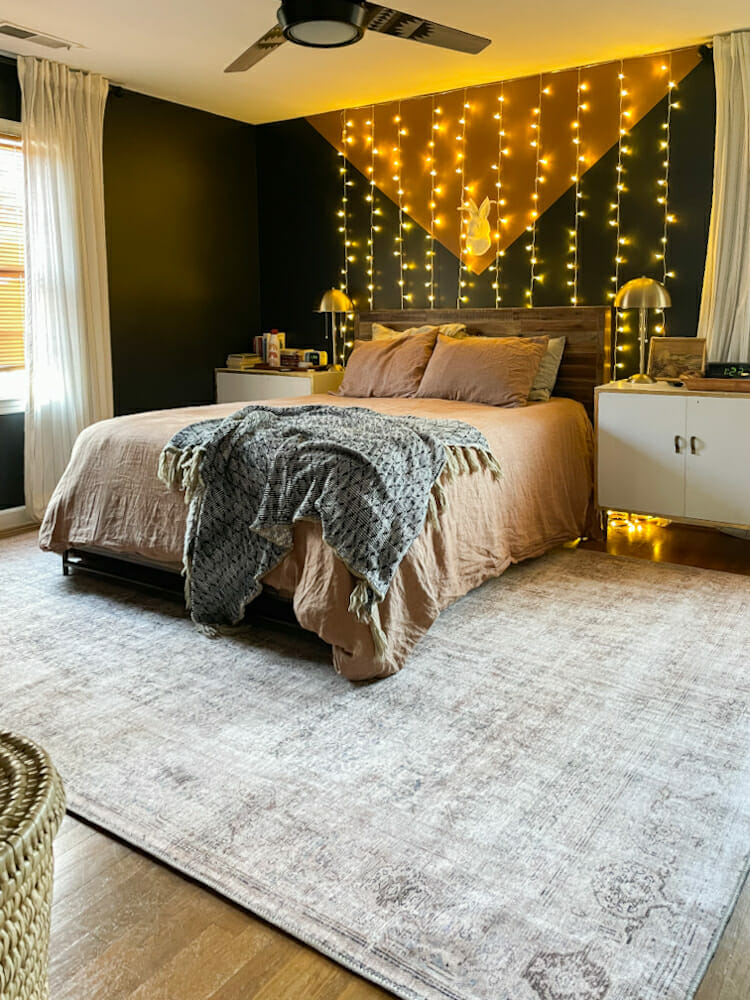 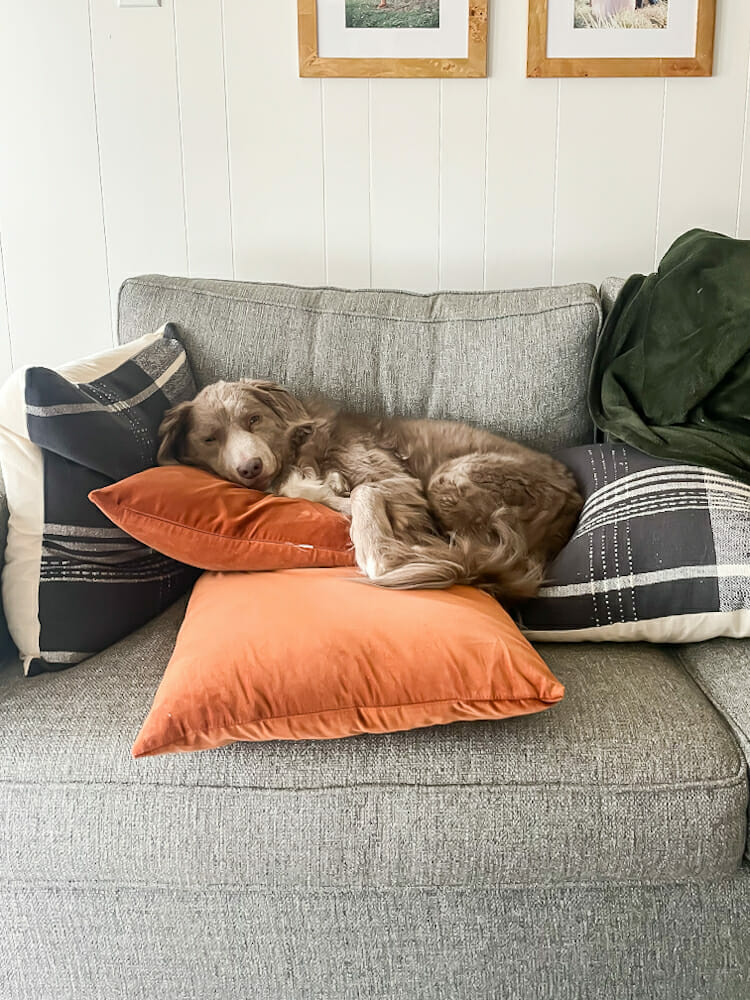 I’ll end with this. May your weekend be filled with as much comfort as a dog on a pile of pillows in complete and utter abandon.