Is it just me, or is this year starting to pick up speed!  I feel like I blinked and we’re just about into February. We’ve had a busy week here at Casa Bustamante and I’ve crashed nightly around 9:30 p.m. If I go to bed this early now, I can’t wait to see what happens when I’m 65. I’ll be eating the early bird specials and in bed by 7 p.m. watching jeopardy, and honestly I am 100% OK with that. Something to look forward to. This week, I’ve got some super fun things to share with you – a couple of items that just made me laugh!  Plus, it’s the end of the month, so we’re living a little and I’ve got one healthy and one unhealthy recipe to share. Sorry, but when your little boy has a cupcake at school and comes home asking for “cate,” you get out your mixer and you make that cate. 😉 Here we go! (This post contains affiliate links through which I earn a small commission. Thank you for your support!) 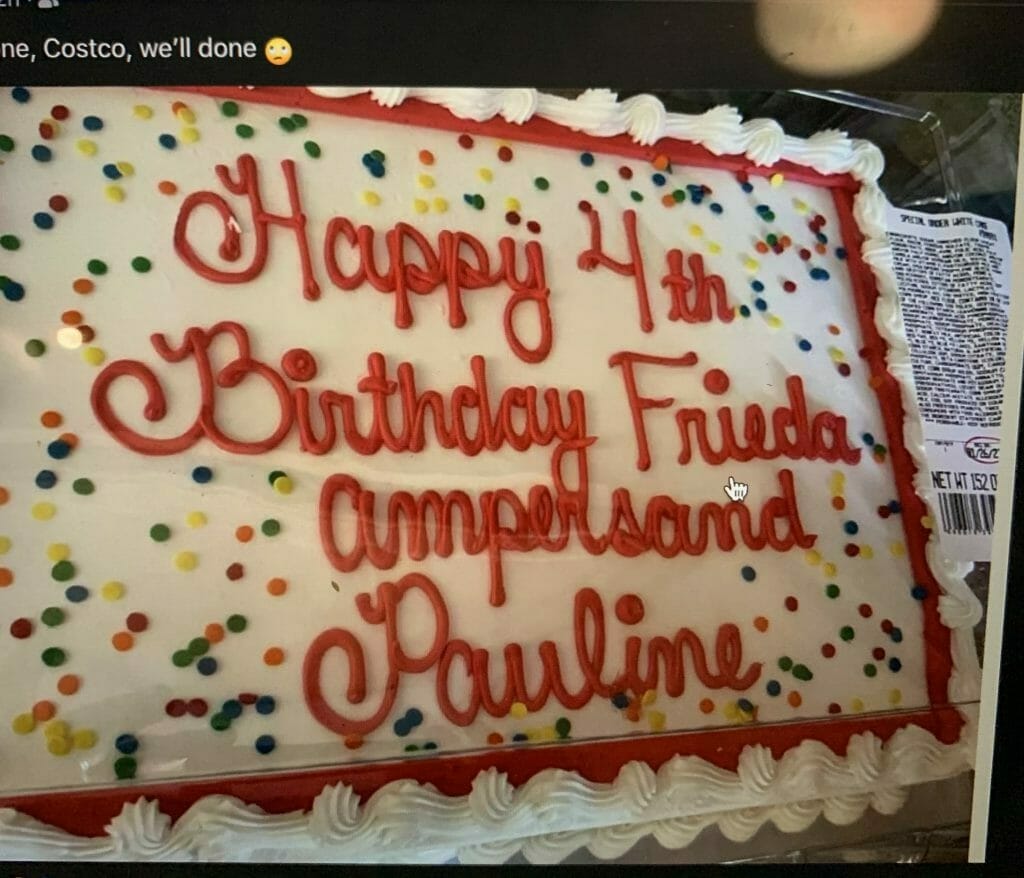 Speaking of cake, that’s not the one we made, of course. No, this cake was posted on facebook last week by a friend of mine who ordered a cake from Costco for her twin daughters’ 4th birthday.  She wasn’t sure if they’d be able to fit it all on the cake, so on the form she wrote “and or ampersand?” Costco took that very literally.  When she posted it, I don’t think she was laughing yet, but I died when I saw it and had to share with you! Note: If you order from Costco, write exactly the words and symbols you want to appear on the cake. Lesson learned, I’m certain!

As I mentioned, last week at Wilder’s school there, his buddy Maggie had a birthday and brought pink cupcakes. The next day he asked me to make him cake, so I found a simple sheet cake recipe and followed that.  He requested pink frosting, just like Maggie’s, with sprinkles.  When he sat down to have his first piece we chatted and I said, “Whose birthday was it?” He looked at me with a huge grin, and said, “This is Wilder’s birthday cake!” I guess he thinks it’s his birthday since I made him a cake. Ha! Anyhow, this cake was made in a sheet pan so think with relatively thick frosting, but because of the size of the pan I was able to cut it into several squares and froze half of it for later.  It was sweet and easy!

During Christmas, I love to burn candles that smell like pine trees or baked goods, but after Christmas, I always feel a little lost as what to burn (besides all of my tight pants.) When we moved a couple of years ago, Frederick candle company, Whiskey Bottom Candle, sent me the sweetest package filled with several of their scents. As I searched for the perfect post-holiday candle, I found their Winter Gin in my stash and it’s exactly what I needed. It’s light and cozy – the perfect blend of spruce, mandarin, cinnamon, clove and a hint of vanilla. 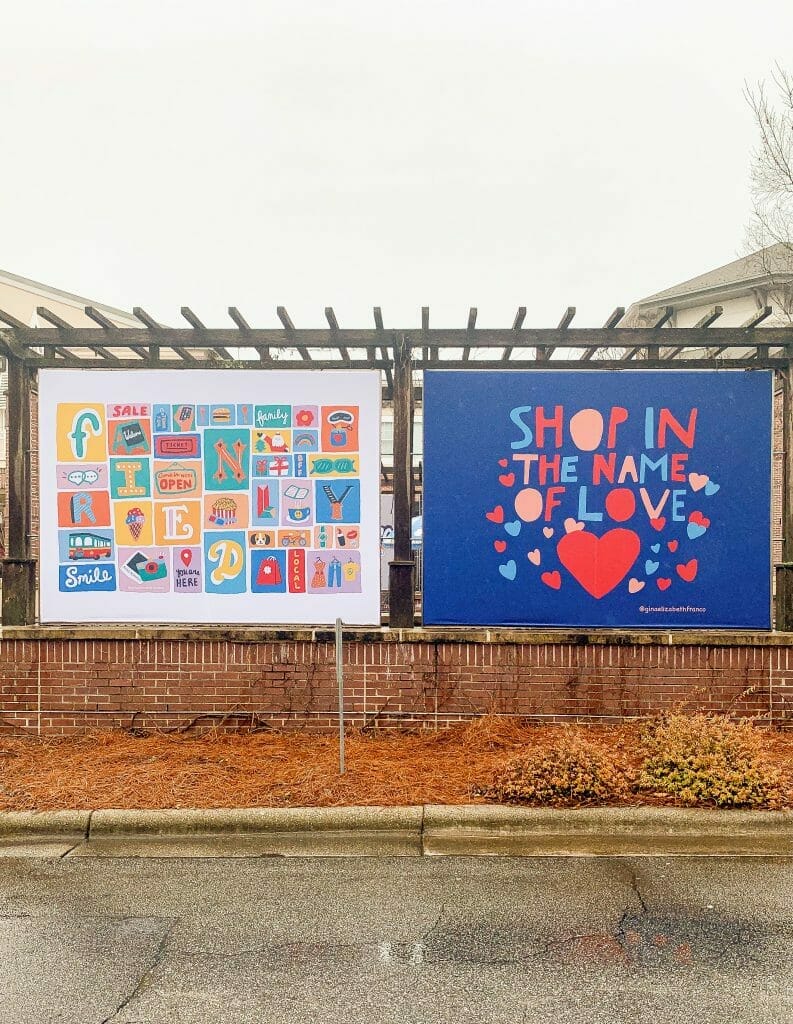 One of the things I absolutely love about Greensboro is the support of the arts I find here.  There’s a phenomenal mural artist who does several of the GSO murals, and our local shopping center, which happens to be walkable from my house, recruited her to create some work for their courtyard.  I ran by the other day to grab some photos and love the positive vibes they’re bringing. 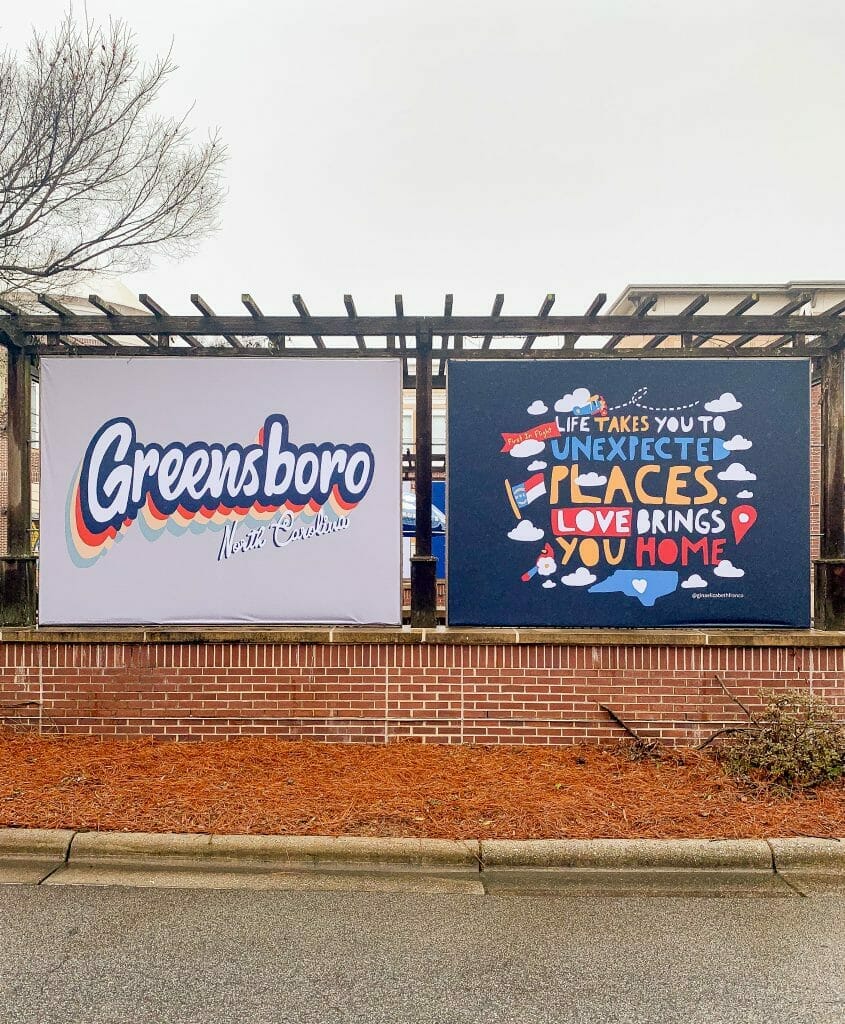 I am SO late to the party, but I just started listening to Armchair Expert with Dax Shepard and Monica Padman.  Honestly, I didn’t think I’d like it and wasn’t a huge Dax fan (I didn’t dislike him, just didn’t feel any pull) until I heard him on both Brené Brown and Tim Ferriss’ shows. I scrolled through some recent episodes and selected his interview with Shawn Mendes, because my taste in music would tell you that I am a 65 year old or 13 year old female. 😉 Emmy introduced me to Shawn years ago, and I adore his music and voice.  His episode was great and really made me like him more as a human. What I really loved about him is how humble he is. He’s been a long-time listener of Dax’s show, so it was fun to hear him sort of geeking out about being on it!

I’ve been wanting to try chickpea pasta for a while and Chris agreed he’d give it a whirl. We purchased this one, and both agreed the pasta itself was good. Well, I liked it, and Chris said he’d be OK eating it again. I told him I’d find a pasta recipe that was healthier and landed on this vegan version of Gigi Hadid’s vodka pasta.  The recipe itself was easy, and honestly very good.  The texture was perfect.  My one little comment, and this is my fault, is not to use unsweetened vanilla almond milk.  I used that because it was in my pantry and I’ve used it in recipes before. However, I could taste a hint of vanilla in the pasta which was a little weird.  Note to self – next time buy plain unsweetened almond milk!

A Laugh to Go

A friend of mine shared this fantastic article from the New Yorker featuring one star Amazon reviews by Fran Lebowitx, and it’s worth the read. Here’s my personal favorite below, but seriously . . . do something today that is just good for your soul, and read the rest.

They set an expectation that a guest in my apartment will actually be welcome.

Which isn’t always the case.

And there should be another mat for on the way out that reads “You see? Was this really necessary? I think a phone call would’ve sufficed.”

Are you laughing yet? If not, I feel like we just broke up. Anyhow, have a fantastic weekend. Get outside and play like a kid again and do things for no other reason than they put a smile on your face.  Much love, Cassie