Do you ever hit a wall? Not literally, of course, although sometimes I think we’d all like enjoy a good fist through the sheetrock. I just mean, utter exhaustion hits and you find yourself pressing the snooze button to choose extra sleep over exercise. And when you finally do get up, it’s only to move from your bed to the sofa under a cozy blanket, curled up still in your flannel pajamas with a book. Last weekend, I hit that wall. People have likened me to the Energizer rabbit because I seem to have boundless energy, but once every three to four weeks, a day arrives where I just can not anymore. When possible, I choose to honor that feeling, knowing it’s my body saying, “Take a rest, girl!” Grateful that it happened on a weekend, I chose to hit that glorious snooze button! In addition to much needed down time, here are some of my simple – and guilty – pleasures from this past week. (This post contains affiliate links. I am also an Amazon Associate. I earn a small commission on sales made through my links.)

A Soft and Cozy Candle

I’ve discovered that I enjoy burning a candle at my desk to set the mood while I work and I burned through a favorite recently. Headed to Scent Workshop to pick up a couple of gifts for some of my favorite Aquarians, I decided to peruse for a new candle for myself as well.  House Cologne is a warm and comforting mix of tobacco, amber and moss – the perfect balance of masculine and feminine energies.  I asked store owner, Lindsay, what the story was behind this one and its name. She told me about a regular attendee of her workshop who always likes to make the same concoction and referred to it as her “house cologne.” Lindsay loved the smell and a Scent Workshop candle staple was born. I also shared this candle in our O.Hey Greensboro instagram stories and recounted it as “the smell of a man who can wield an ax but also snuggles tiny kittens.”  I think that description is spot on.

As you know, we’ve been trying at least one new recipe a week and I often try to select something healthy and vegan but that I think Chris will like. Would he prefer real meat and cheese? Absolutely. Does he love vegan substitutions? No. But is he a good sport? Eh, 50/50. This past week, I had a hankering for stuffed peppers after seeing a bean and rice version cross my virtual path. But I wanted something with more Italian flair and came across this recipe which was incredibly easy and delicious! FYI: as my grain, I selected quinoa for more protein and just diced up a vegan sausage for our “meat.” Inside, I used a vegan parmesan cheese in the mix. Each was topped with vegan cashew mozzarella from Trader Joe’s, except for Chris’ which I used real mozzarella on.  I absolutely loved this dish and Chris would eat it again, which is honestly my standard of measure here. 😉

What can I say?  I love young adult television and books! Netflix has a rather new series out called Fate: The Winx Saga. Chris and Emmy actually watched a few episodes and I was intrigued so caught up with them and we finished the last three together.  (There are only six episodes.) It recounts the story of 16 year old Bloom, who has been living in our world unaware that she actually has power and is a fire fairy – that is, until she sets her home on fire with her family inside. She’s whisked off to a fairy school where other teen fairies are learning how to master their own powers. And naturally, there’s a rather awkward, chubby, dorky girl who really helps make the show. Maybe that’s because I always relate to that character. Magic, teen drama, awkwardness and dark creatures – sign me up! We loved it and are not so patiently awaiting season 2. 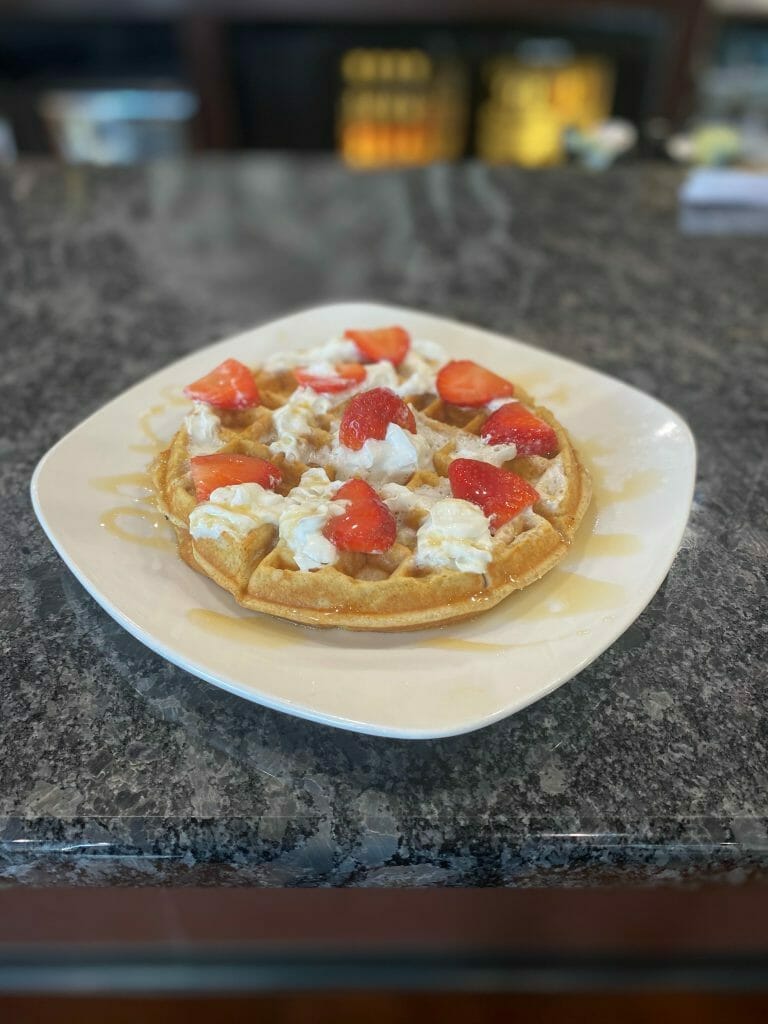 I have been dying to try Dame’s Chicken & Waffles since we moved here and we’re finally ordering from them for a Valentines family brunch.  Emmy’s favorite food is fried chicken, Sawyer’s is waffles, so this is a total win. For Valentine’s Day, they’ve got a special cheesecake waffle, too, shown above.  I plan to order their gingerbread or organic blueberry with a maple pecan or perhaps vanilla almond shmear – they all look SO good!!!! Dame’s has three NC locations: here in Greensboro, Raleigh and Cary, so if you’re nearby, check it out.

I am constantly searching for songs that have a good beat to run to, and recently added this classic to my playlist.  It’s so peppy that I love to listen as I kick off my run.

I don’t listen to Tim Ferriss as much as I used to because his episodes are really long and I don’t have the time I used to nor am I in the car as much. However, this weekend, I tuned in to his recent interview with Jerry Seinfeld and I am so glad I did. I recently started writing for myself, getting down on paper (OK, more like Apple pages) the stories of my own life, the ones that have formed who I am as a human being. His interview focused a lot on his writing process and it was such a relief to hear him say how freaking hard writing is and that he edits over and over. From the outside looking in, I assume many people think writing is rather easy, but I can attest to the fact that it’s not. While I do think there’s some kind of natural gift involved, it’s also, like everything else in life that’s truly worth it, something that takes time and practice and the ability to withstand harsh criticism. You might assume this episode was hilarious, but it wasn’t especially funny. It was extremely insightful if you are trying to hone your own creative process. In addition to writing, Jerry also talked about how he takes care of himself and pushes himself and how the growth comes from the challenges – with both mental and physical exercise. If you’re looking for some tactical advice, check out this episode of Tim Ferriss.

All of that being said, I’ve started dedicating Friday mornings to my own writing time. Last week, I sent what I wrote to my editor (not to publish, just to get feedback) and she was so encouraging and recommended I read the book, Bird by Bird.  I went out and picked it up already and can’t wait to dive in. She’s also offered to line edit my piece and, after that, I’m hoping to share it with you. 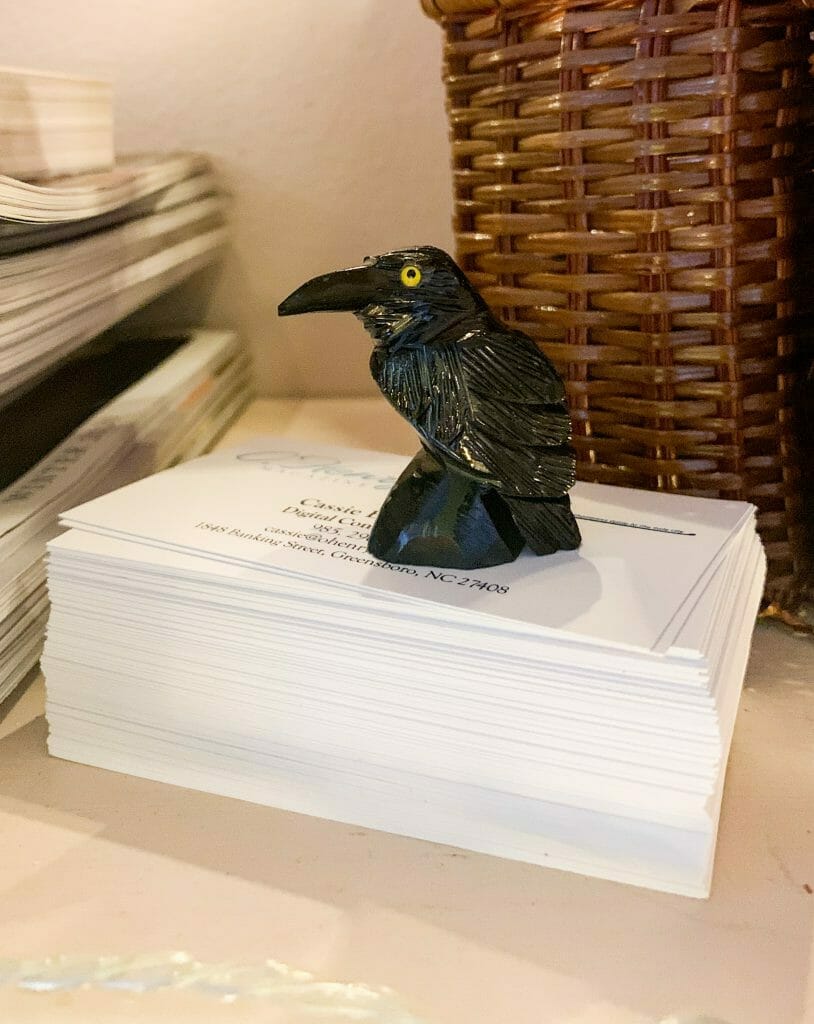 Have you ever used Gabby Bernstein’s exercise in asking the Universe for your sign? I read about this process in The Universe Has Your Back and Super Attractor, but she also shares it here, if you’re interested. When I practiced, the thing that came immediately to my mind was a crow.  My gut reaction was, “REALLY, Universe?  A common cackling crow?” But then I read about them and how intelligent they actually are and that they mate for life. And I thought, well, OK, maybe I wasn’t giving them enough credit and just needed to trust. Sure enough, I’ve noticed them popping up all over the place, in TV shows, in SO many of Wilder’s books, even publishing company names. Right after I was hired at O.Henry, my editor friended me on Facebook, and I went to her profile where one of her most recent posts was about “a murder of crows” in her yard on Halloween. It seemed to me a sign from the Universe that I had taken the job meant for me.  This past week at the office, we celebrated her birthday and I brought her a snake plant for hew new space in the building. As I was leaving, she said, “Wait, I have something for you, too. And she pulled out this tiny little onyx crow figurine. I don’t know where she found it, but she told me she felt like it was telling her she should give it to me. Now he sits on my desk at home and I plan to keep him here as my muse.  Above all, I was touched by the kind gesture. It’s incredible to work on a team that really gets you in all of your weirdness.

I’ve been keeping up with all my reading and plan to share a post at the end of February or early March with all of the books from the first two months of the year. I recently read about The Alchemist on a blog and was wondering how I’ve made it all of these years without reading it.  After hearing about it, I also tuned in to Oprah’s podcast featuring the author, Paulo Coehlo, to hear him speak.  He was utterly joyous and endearing. Finally, I cracked open the book and read it and it’s such an easy one or two day read filled with so much truth about finding out purpose here. If you’re feeling a little lost, it’s definitely worth reading and perhaps taking your own journey of self-discovery.

Well, my friend, that’s all I have for you this week.  I hope you have a beautiful weekend celebrating your loved ones, whether it’s your girlfriends, partner, kids or pups or even that sexy minx in the mirror. No matter what you’re doing, take time to let others know how you feel. Say it with waffles.  And schmear. 😉 Happy Galentine’s and Valentine’s Day!