TGIF! The sun came out this week and glorified the earth with its golden rays. As I walked my dogs, actually sweating in the afternoon warmth, I thought about how quickly those afternoon walks will become too darn hot.  Sorry, summer lovers. I am team 40-60 degrees and I’m not quite ready to give that up. In other news, Chris has been making the rounds and test-driving cars, but no decisions have been made yet. I’ve been trying to convince him to take my Flex and I will get a new car, like maybe a Jeep Wrangler, but he doesn’t seem to want my 120k mile 10 year old car. WTH, Chris? So no new car for either of us to share today, but I’ve got lots of great food for thought, food for the soul and food for the belly. 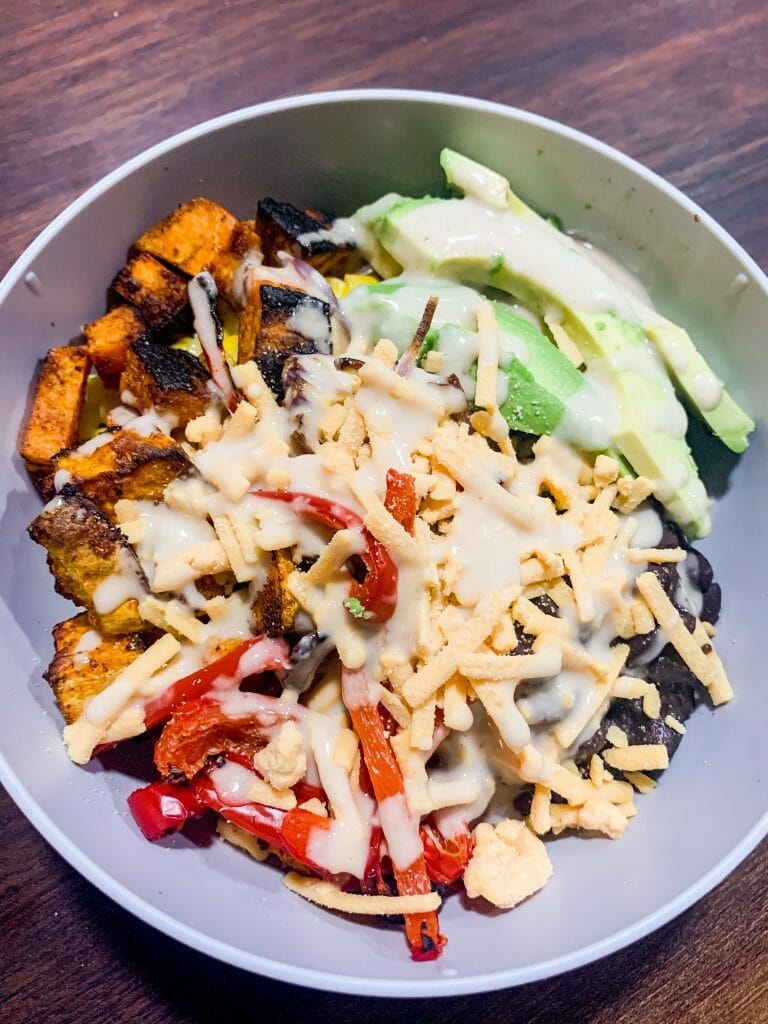 Let me start this by saying, I was the only one who ate this entree.  For the rest of the fam, it was quesadillas and crockpot chicken tacos. We basically just had a Mexican theme night and I created a vegan sweet potato and black bean burrito bowl.  I absolutely loved this dish and it was really easy to make.  Some teaks I made: I used cauliflower rice which I cooked with a little lime juice instead of her cilantro lime rice.  Also, I planned to make the sauce as she did with tahini, but turned out my tahini was a solid block of “when did I buy this?” I pivoted, as one does this days, and substituted a vegan mayonnaise I had and it was terrific. This meal was so good, that I was super excited for leftovers the next day!

My coach/friend Chandra texted me a couple of weeks ago and told me that I had to watch Palmer on Apple TV, which she let me know was a tear-jerker.  I hadn’t heard of it so I watched the trailer and was almost already crying.  This movie stars Justin Timberlake, Ted Lasso’s Juno Temple and breakout child actor Ryder Allen, who is adorable and absolutely phenomenal.  Palmer, played by JT, is a newly released ex-con who heads back to live with his grandmother who raised in in the small town where he grew up in Louisiana.  Sam is an little boy living in a troubled trailer right next door.  The two form an unlikely bond which is broken when Sam’s addict mother, played by Temple, returns to town to take her son. I selected this for family movie night last week and while the kids didn’t love it, Chris and I both thought it was incredibly well done and the story was powerful. Check out the trailer below:

My editor and I, as it turns out, have very similar taste in music, both appreciating soulful yet quirky singer songwriters. Of course, being older, I am not as up on the singer-songwriters of today.  She sent me a song by Valerie June, and it was instant love for me.  In return, I sent her one of my favorites by Beth Orton. Not surprisingly, we’re both suckers for moving and meaningful lyrics and neither of us can work with music on because the words pull us in and crowd our heads. Anyhow, I wanted to share with you the song that she sent me because I think you’ll love it, too. 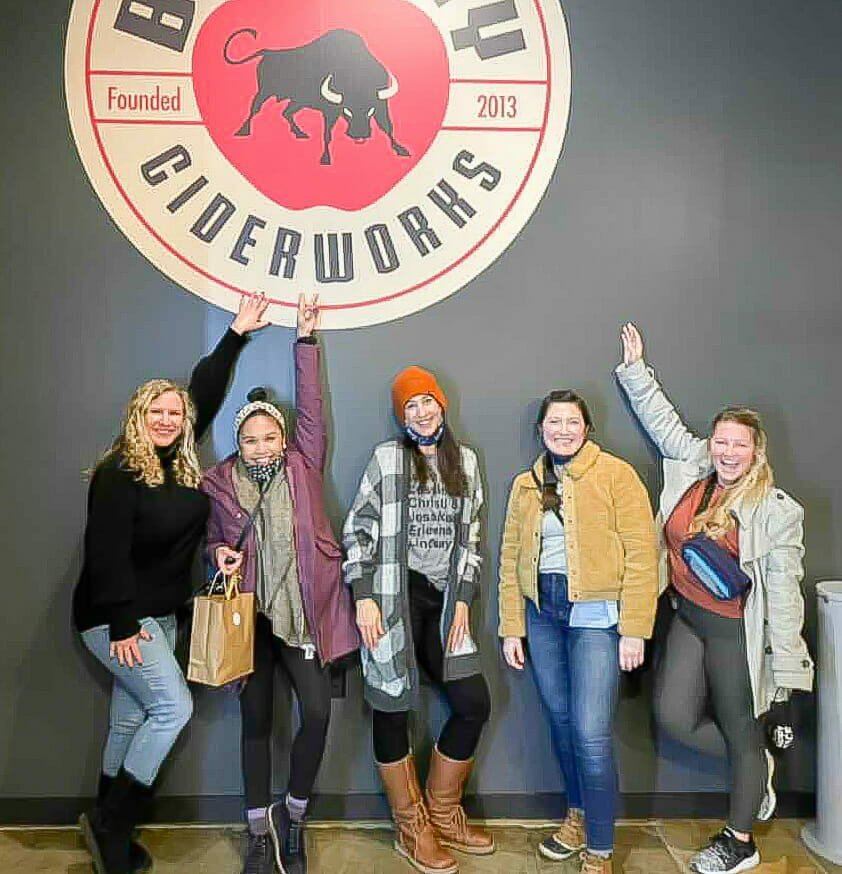 PinThis photo was taken rather quickly as we all pulled our masks down and held our breath! From left to right Lindsay, Susel, me, Erienne, Christi

Oh, how I’ve missed my friends! A little while back, I reached out to Bull City Ciderworks to ask if we could reserve their fire pit outside so that we could safely get together. As it turned out, they closed before we had hoped to get there so they did one better and let us have the place to ourselves with one bartender and closed a little early so they could clean first. We sat safely apart with masks on and enjoyed deep conversations and delicious – like insanely delicious – cider. I got a flight so I could try many flavors and honestly loved them all with Cardinal Cin being my favorite . . . because, cinnamon! The Rhize Up was also amazing and flavored with fresh ginger and Beetnik had a fantastic earthy taste. 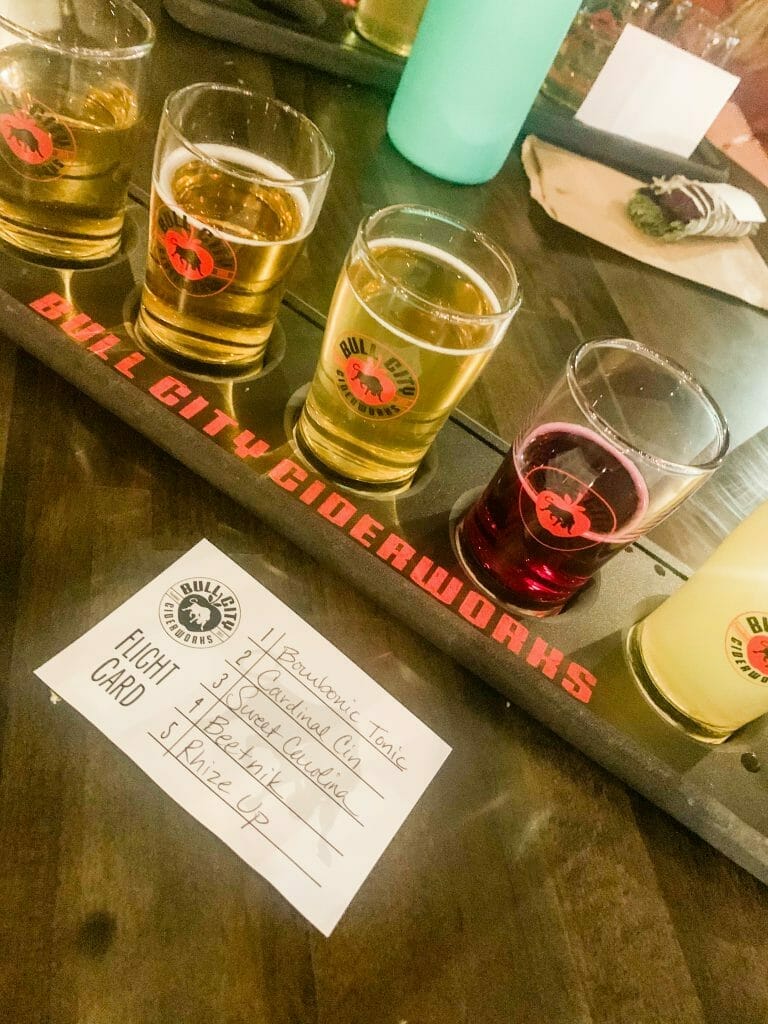 I can’t wait to go back with Chris and sit outside. A huge thank you to Bull City Ciderworks for allowing us to safely see one another.  Also, a huge thank you to Erienne, who brought each of us a sage smudge stick from her shop so we can all start clearing out the negative vibes in this world.  I’ve shared this group of friends here before but I just wouldn’t have made it through this past year without their friendship and support.

I came across this post on one of my favorite blogs the other day, entitled Befriending My Former Selves. It’s a short and thoughtful read worth checking out.  Here’s a passage:

My former selves have a lot to say, and as it turns out, they have not gone far. They live inside me like a matryoshka doll, the fashion growing more regrettable with every layer. The more time I spend with my past selves, the more I discover the embarrassment runs in both directions. I not only uncover old disappointments, but also old dreams — things I wanted but was too afraid to try. My younger selves demand to know what happened, and I have no suitable response.

I never read this book and I sort of regret jumping into the series first, but have you watched Behind Her Eyes?  I’m a few episodes in and so far it’s got me really intrigued.  I feel like it’s moving rather slowly, but I know it’s all building up to a shocking ending.  I don’t know the ending, but I saw something somewhere that mentioned its twist ending. I don’t wanna know yet. . . I will keep watching! Here’s the trailer for you: 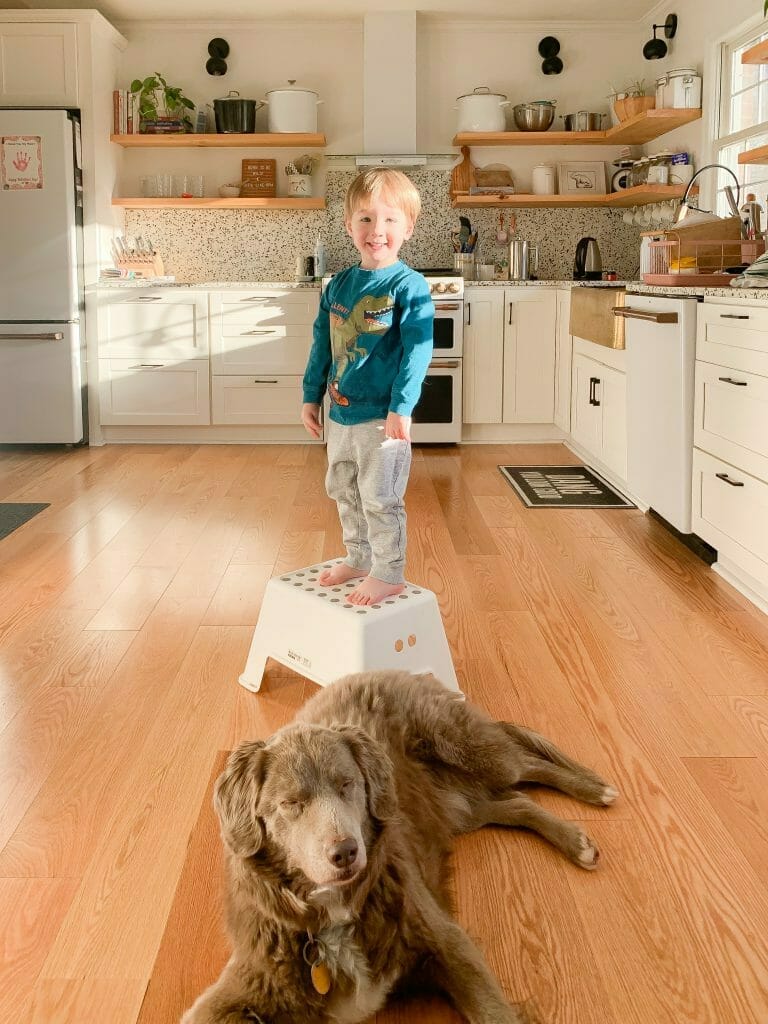 PinAt the end of Brené Brown’s Unlocking Us podcast, she asks her guest to share a small moment of everyday joy from their lives.  Last Saturday, Wilder was standing on his step stool in the middle of the kitchen and loved feeling a little taller. “Wook at me, Mommy!” he declared.  I captured it with my phone camera because I just wanted to bottle that sweet moment as he was filled with pride and wonder. He’s growing each day, and in a couple of years he’ll be as tall as that boost of height makes him. I just want to sit in each of these magical moments with him and etch it into my memory. Tell me, what’s an everyday snippet of your life that brings you great joy?

I hope you have a wonderful weekend filled with those kinds of simple moments.  Chris and I are headed to Sonder Mind & Body for a sauna together followed by a float.  I’ve never floated and am really excited to try it!  We received a gift appointment from my sweet friend who is one of the owners after she heard about our bad luck last week. (By the way, she’s in that group of friends pictured but couldn’t make it.) I was so touched that she did that for us. I honestly pinch myself that I’ve landed here and am surrounded by such a loving community. Happy weekend!