I am just gonna put it out there. Rip off the band-aid. I have a teenage son who would be cracking up at the title of this post. That is all. He actually just walked in and read this over my shoulder, hugged me and chuckled, “Yep, thanks, Mom.” Ok, now that that’s over we can move on to all of the wondrous things that have made this last week stellar. Between books, shows, new recipes, and so many little moments, this week was fantastic and I am excited to bring some of that joy to you. You know what they say (and by they, I mean Christopher McCandless), “Happiness is only real when shared.” Here I am, pulling a McCandless. 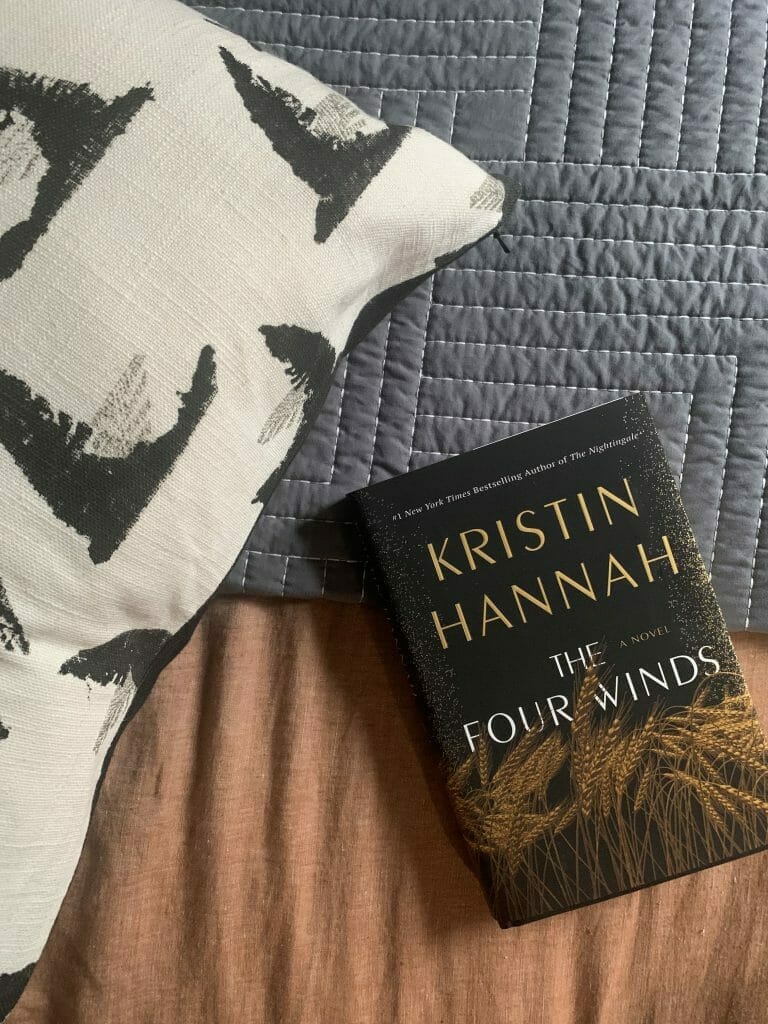 This blog uses affiliate links and I am also an Amazon Associate. I earn a small commission on qualifying purchases made through my links. I appreciate your support.

Our book club is reading Kristin Hannah’s latest, The Four Winds, for the month of March. Our February book was a bomb for me (I gave it two stars, but the other three girls gave it between three and four) and heading into this one, I knew it would be great because Kristin Hannah, but I also was dreading the page count, which was 445. Once I got into it, I got into it. Taking place in the years leading to and throughout the Great Depression, this book follows Elsa, a supposedly homely and sickly young woman whose family has never shown her love. One night, she decides to sneak out and meets Rafe, a handsome Italian. She becomes pregnant with  his child and ends up marrying him after her family disowns her and moving in with his Italian immigrant farming parents. As the story unfolds, the Great Depression begins to take shape, the marriage starts to fall apart, and Elsa finds herself raising her children on her own, and trekking west in hopes of a better life. Oh, I cried so many times throughout this book and loved the characters, their strength and their stories. This book was about so much more than I can sum up in one paragraph, but do yourself a favor and read it. This passage below was one of my favorites about friendship. 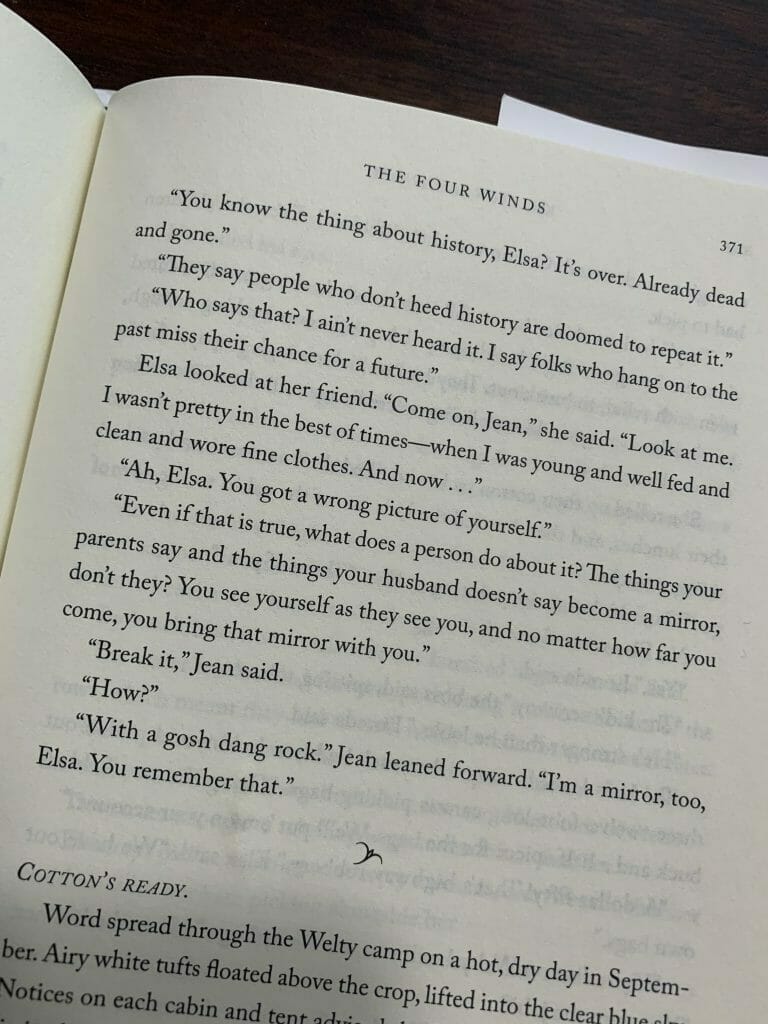 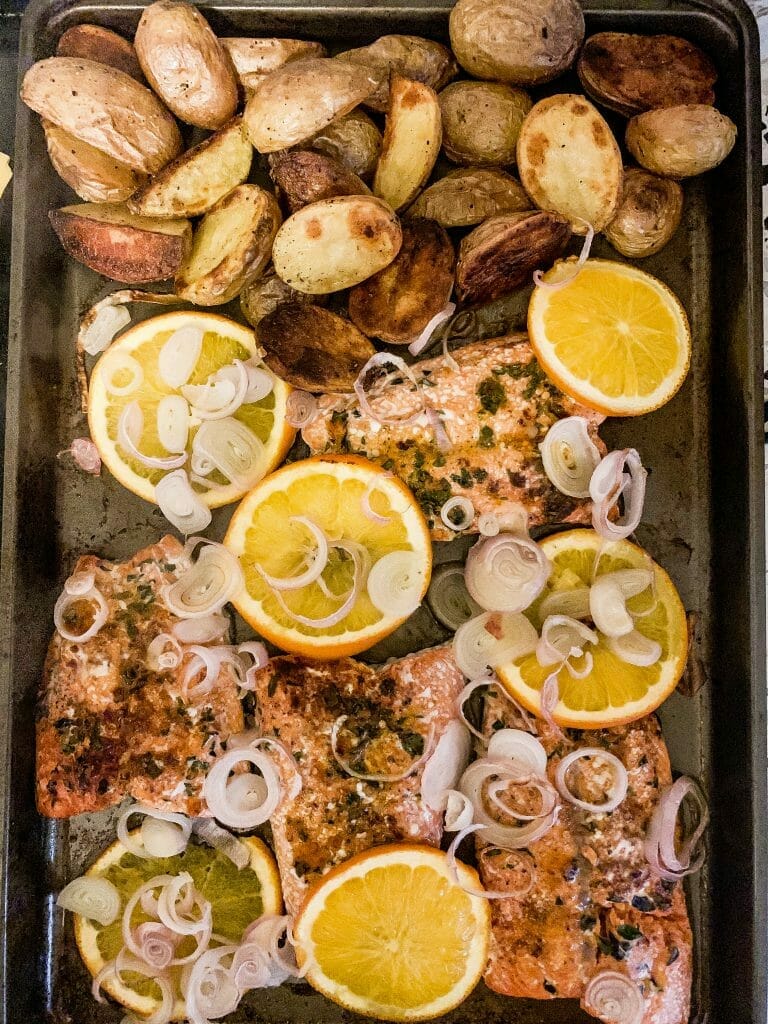 By now you know how much of fans Chris and I are of Half-Baked Harvest. Many of the recipes we try come from Tieghan. I love her recipes because they are relatively easy to follow and her photography always lures me in, plus I just love the girl behind the blog. I want to cheer her on and support her. Last weekend we tried her sheet pan salmon with citrus avocado salsa and potatoes and it was a total winner.  First of all, who doesn’t love a one pan dinner, am I right? By the way, as you can see from my photo, I forgot to toss arugula on top at the end.  I bought arugula.  Just forgot it. Anyhow, if you like seafood and want something that’s the perfect blend of cozy winter paired with the citruses of spring, I am this is your dish. (One of these days, I am going to buy one of her books. Here and here.)

Show to Watch with Teens – or not

After finishing The Wilds and Never Have I Ever, Emmy and I needed a new series to dive into. After hearing all the buzz around Ginny & Georgia, I invited Emmy to watch with me.  We started earlier this week and it’s even funnier than I expected.  It’s a great mix of drama, comedy and even a little touch of murder. You know I love a good dead body. 😉 Check out the trailer here.

A huge perk of my job is always staying in the know on what’s going on in our area. Greensboro Parks & Rec put on their annual chalk walk this past weekend at the arboretum which is about a half mile walk from our house.  I headed over Saturday to take a peek at the artists at work. I mean, how incredible is this Venus flytrap piece? 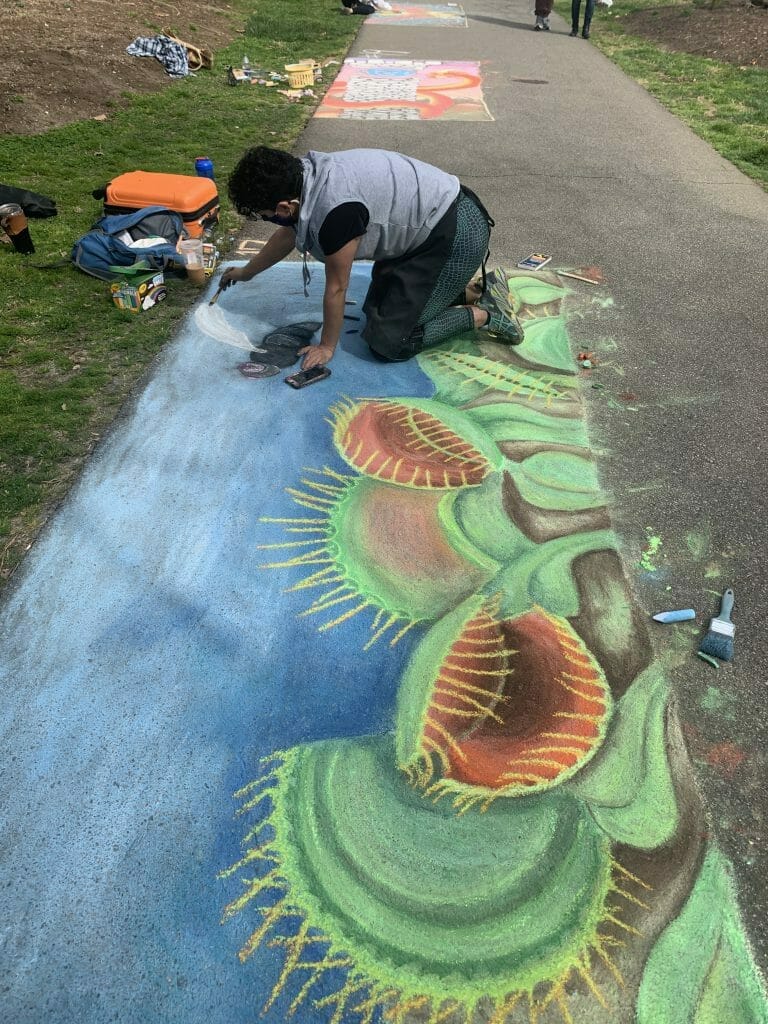 Sunday Chris, Emmy, Wilder and I walked back over to see all of the completed works and vote on our favorite. For the record, I tried so hard to encourage Emmy to participate as they had different age brackets, but she said no. My hope in bringing her to see it was that she’d be inspired and perhaps take a gander next year.

The winner for the adults was this koi fish pond which was created by a local teacher. 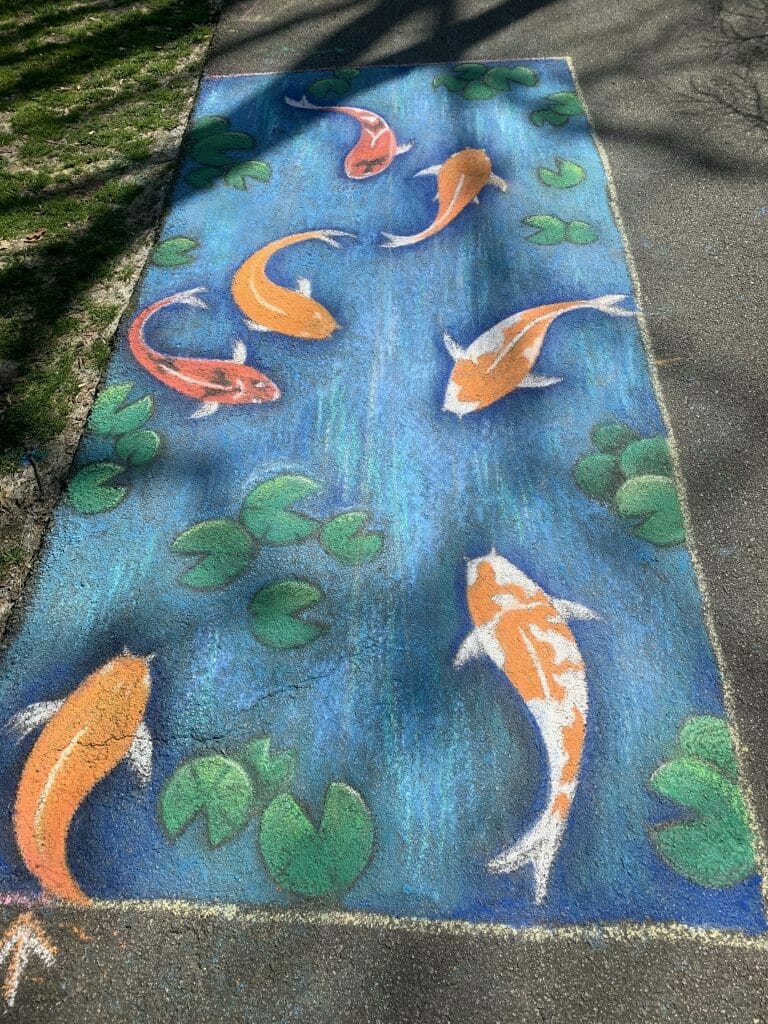 Emmy and I both voted for this one which took home crowd favorite and 12+ youth. We were so impressed with her accurate depiction of Dory and Hank. When I was there Saturday I chatted with some of the artists, including this lovely teen, Tenley. She and her mom were both so sweet. 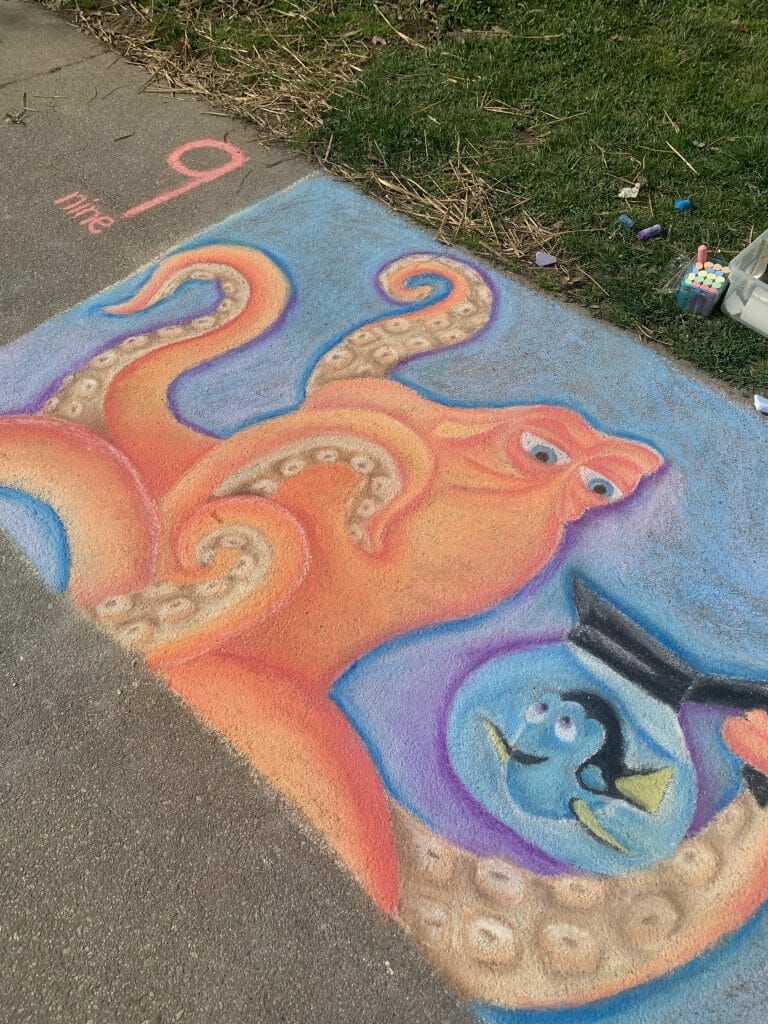 If you want to lift yourself up, lift someone else up. – Booker T. Washington

We can all agree that we are living in strange times. Raising teens during a pandemic is no walk in the park, but that quote by Booker T. Washington is something I do my best to live by. When I am feeling down, I try to lift my spirits by paying compliments to strangers, smiling at everyone and doing kind things for others. It always works. While I would not say Sawyer was down, I would say that I knew there was room for much more happiness in his life. My neighbor, Jim, (the one who is the founding editor of the magazine which now employs me) and his wife recently had a large pile of mulch delivered to their house. I would pass it on my way to and from school with Wilder and one day, I had a lightbulb moment. Sawyer has had so much experience with mulch over the years from helping my parents and I knew he could be of service here. I saw this as an opportunity for him to help someone else and feel great about himself. I texted Jim’s wife, Wendy, and volunteered Sawyer’s mulching skills. When I reported to Sawyer that he’d be going over to help, his instinctive reaction was to roll his eyes and say “What!?” But then after a moment, he just said, “OK, I can do that.” Sunday, I walked him over and introduced him to Wendy, who put him to work for an hour, insisting that she pay him, too.

When Sawyer arrived home, two wonderful things happened.  First, Wendy texted me to tell me what a hard worker he is. Later, Jim also told me that Wendy had said he’d been a great conversationalist the entire time as well. But the best thing that happened is that he returned with a huge smile on his face, happy to have gotten out of the house and to have done something that helped another human being. He thanked me for setting up the opportunity for him and told me he was going back this weekend to help with weeding and seeding. I was SO proud of him for recognizing what a difference it makes to your spirit when you help others. 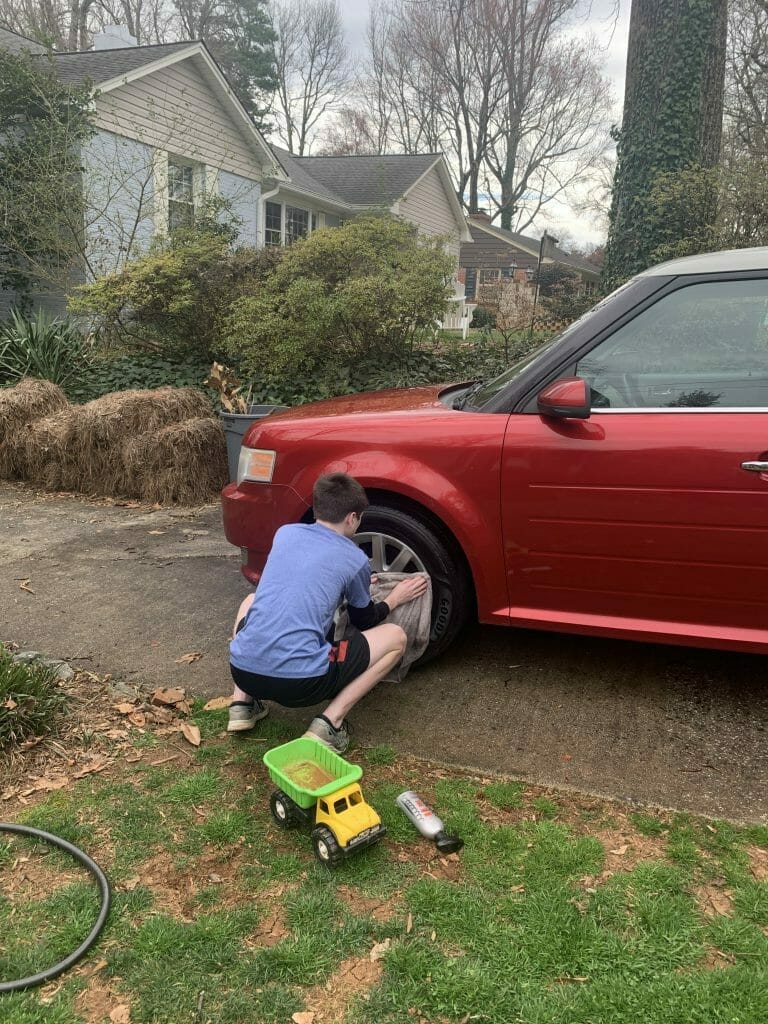 (Photo from Saturday, when we put Sawyer to work at our house! His spirit wasn’t as magically brightened by doing chores here, but you can’t win them all.)

Bonus: Wendy is a skilled baker and sent us home with these insanely delicious and artful cookies. I asked her if she still made cakes to order and she said she’d be glad to. Wilder will have a much prettier cake this year than last year, and she even offered to let Emmy come help her and learn some tricks of the trade. Sunday night, I went to bed with a very grateful heart.

Note: If you clicked the link you will see the light blue bus cake we made for Wilder’s second birthday. Just a couple of weeks ago we watched The Longest Yard for movie night and I noticed that the prison bus was a similar shade of blue. Yep, we made our kid a prison bus cake. Here’s to you, Wilder. You’re going places and we hope jail isn’t one of them. 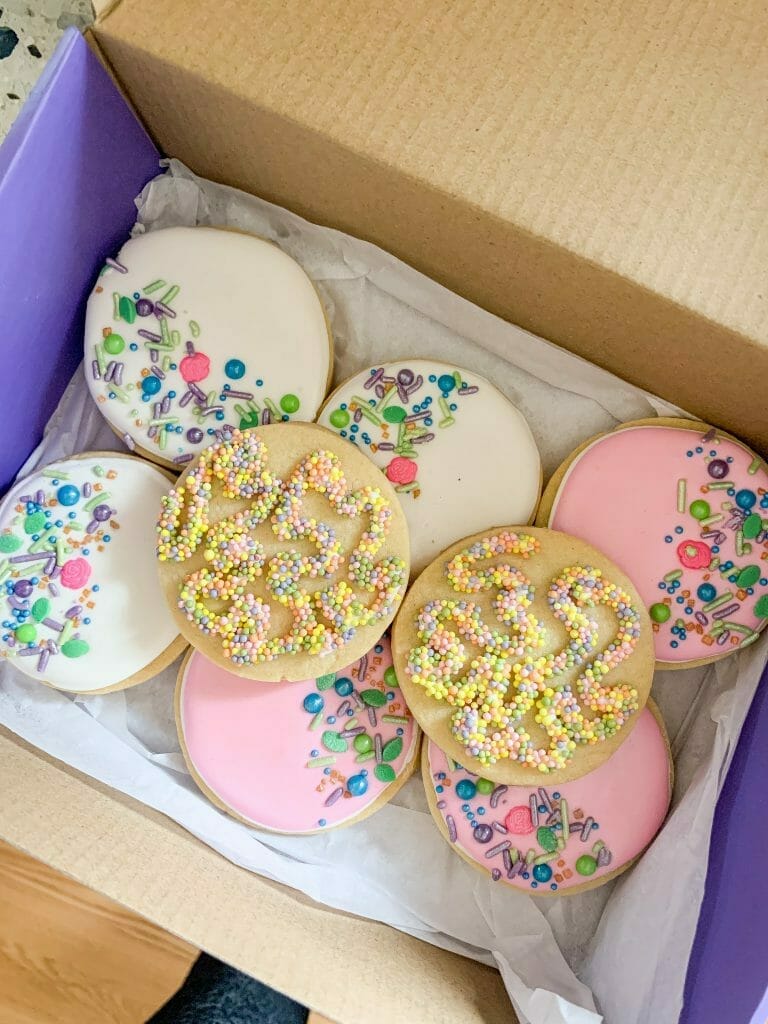 Thanks to Emmy, Wilder is a fan of Harry Styles and other popular music such as Billie Eilish.  We let him stay up for a little bit of the Grammys on Sunday to enjoy some of the performances. Thankfully, he was safely tucked away in bed when WAP was performed. Anyhow, he has this rolling Jackalope toy that becomes his guitar when we play music.  Well, Sunday night it became his guitar and microphone and he was having the time of his life jamming to the Grammys. You’ll notice his musical chicken also made its appearance so he could play that a bit as well. If jail doesn’t work out, I think he might make a great performer. 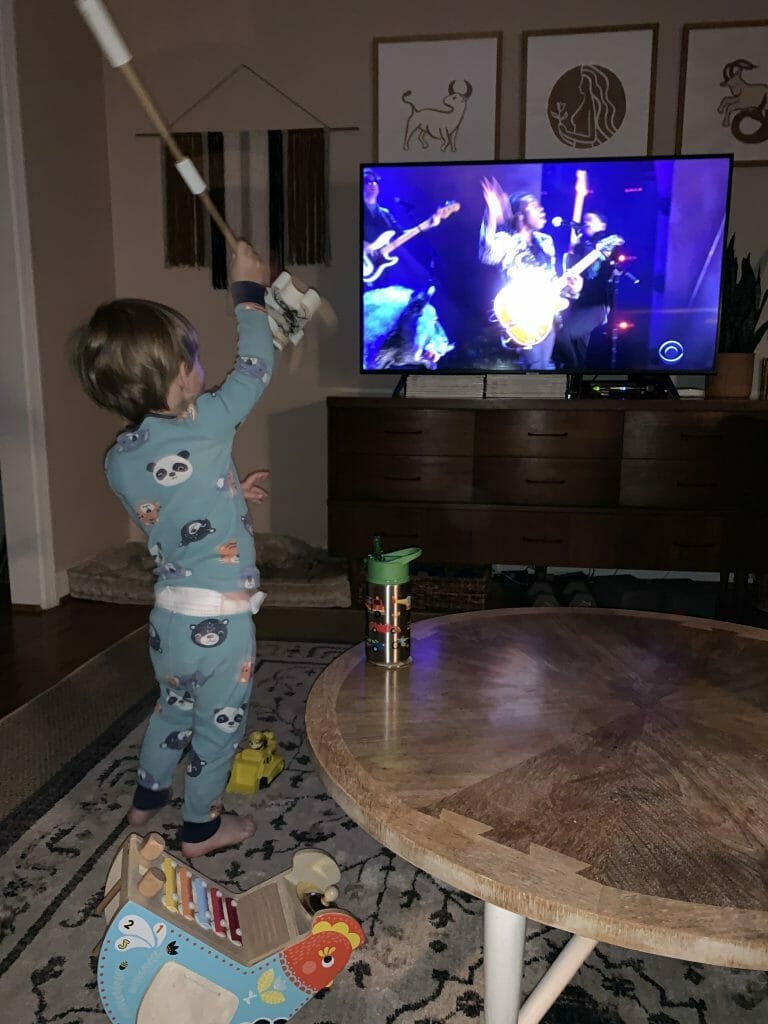 Chris was away all week and Wednesday Wilder was supposed to wear green to school for St. Paddy’s Day. He was fighting me on this shirt, so I did what good moms do. I pulled that t-shirt over his screaming head and consoled him with three green m&ms. As you can see, he was much happier about it later that morning.  Either that or the sugar was kicking in. I will say, all of the other kids were wearing green and shamrocks so I am sure he was happy I forced his hand. 😉 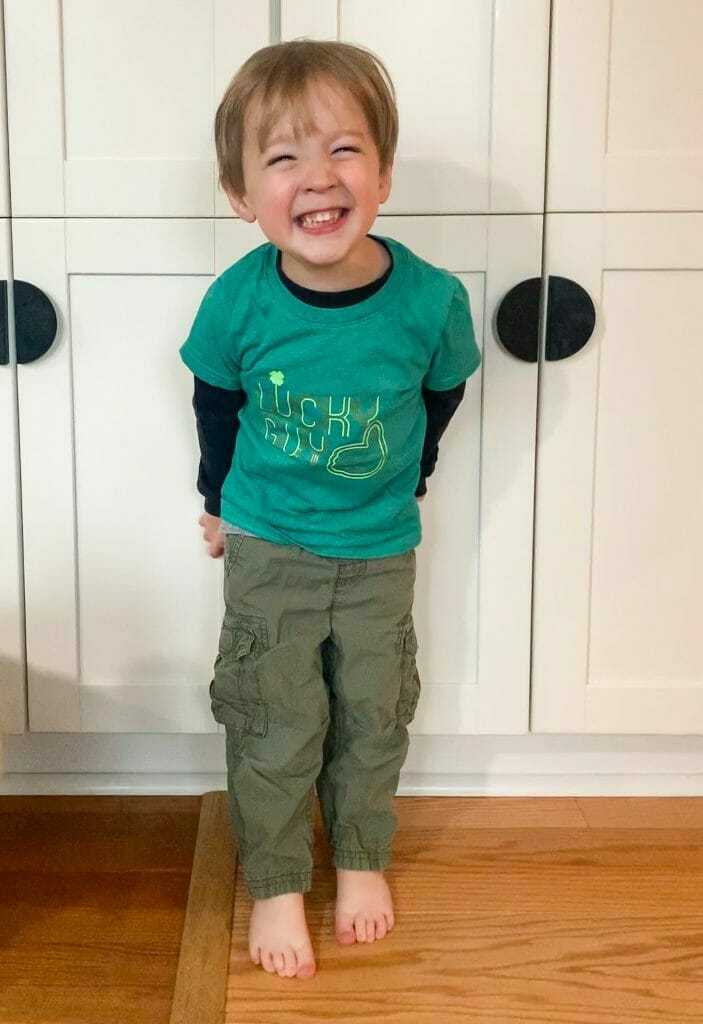 One of my best friends posted this on my facebook wall and reminded me of our 6th grade field trip to the natural gas tower.  I think you can assume which friend I was . . . the one cracking jokes and getting her to giggle uncontrollably. I often had that effect on my middle school friends. In my defense, this was a natural GAS tower, people! By the way, she’s a teacher now and I can only imagine she sees kids like that now and smiles as she thinks of me. Or perhaps, more accurately, rolls her eyes and curses karma for her giggling back in the day. 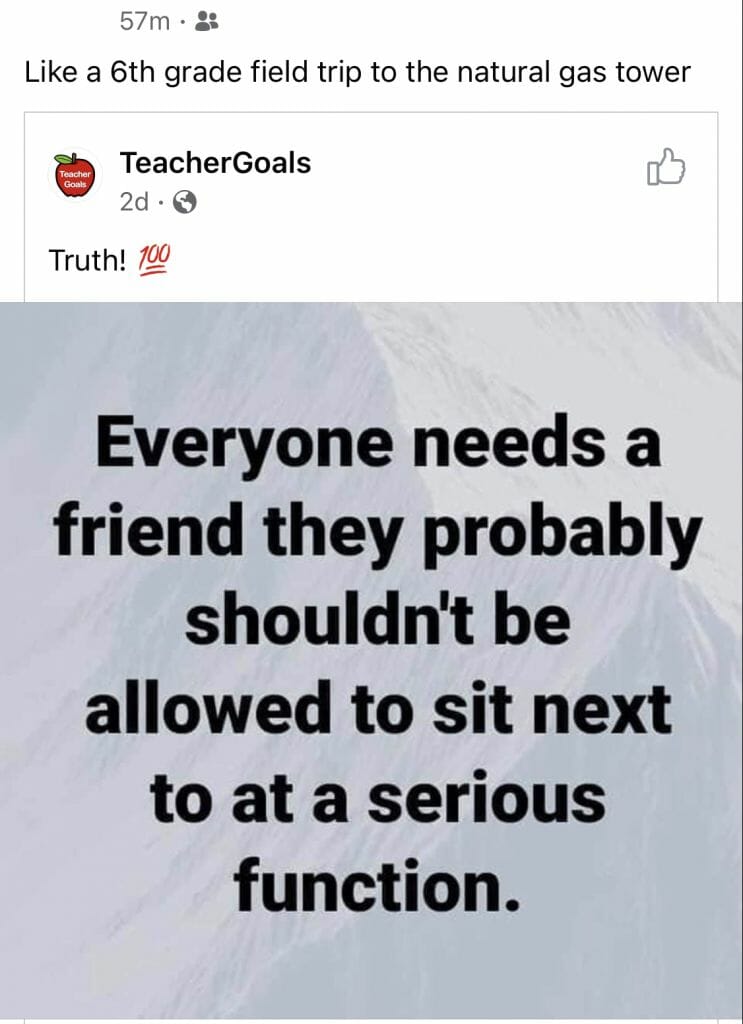 And with that image of a 12 year old me giggling about natural gas, I leave you. Have a fantastic weekend pulling your own McCandless and sharing joy wherever you can.