One of the very few disadvantages of my job at a magazine is that we’re always working a month or two ahead of the real world.  This week, I had a moment where I wondered, “Did Easter already happen?  Did I even get my kids chocolate eggs? Why am I even here. Is this an eggs-istential crisis?” Good news, friend.  Easter hasn’t happened yet – just in case I had you panicking. Although most likely you are more aware of what day/month/season it is. Maybe not though.  Because last I checked the season is still pandemic. Speaking of which, I am going to get my first dose of the vaccine this afternoon.  As media, I am lucky to be in group 1C and able to schedule. Fingers crossed for no side effects, except maybe a little loss of appetite.  That would be a welcomed bonus. Speaking of bonuses, these are all of the little perks that made my week a good one. 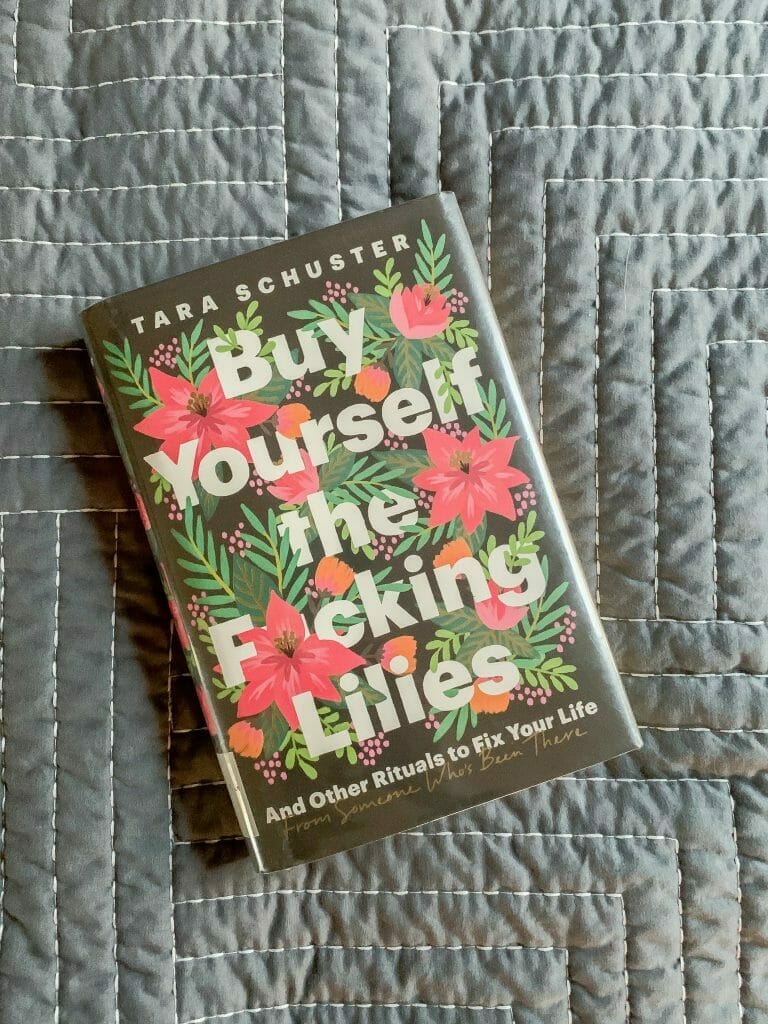 This blog uses affiliate links.  I am also an Amazon Associate.

A Hilarious Yet Helpful Book

Last year, I heard Tara Schuster on the Famous Failures podcast. (Here’s the episode if you want to listen.) She’s the VP of Talent and Development at Comedy Central. As you can imagine, the woman is funny. Her book, Buy Yourself The F*cking Lilies, is self help wrapped up in sarcasm and wit – basically, my kind of book. On her 26th birthday, Tara had a complete breakdown, drunk dialing her therapist and having zero recollection of that the next day. Her life, though seemingly successful on the outside, was a shambles on the inside because she hadn’t really dealt with much of the childhood trauma and pain of her youth. This book shares all of the advice and rituals that helped her grow into the person that she desired to be.  While some of it wasn’t exactly relatable to me because I am a married mom and she’s a single millennial, I did find much of it thoughtful and helpful. And always hilarious.

Here’s a photo of a page that I shared with a few close friends. And now you. 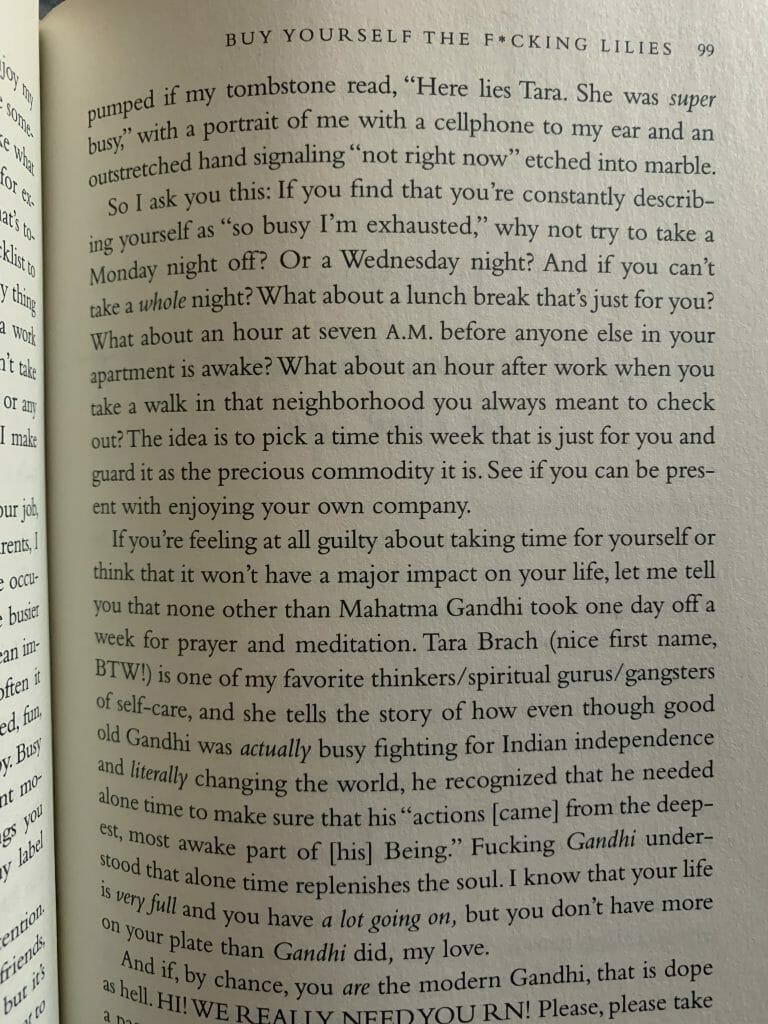 We’ve tried a couple of vegan potato soups before, and this one really got it right. It was flavorful and I liked the mix of creamy soup with chunks of potato. The original recipe itself calls for chicken broth and bacon.  I replaced the chicken broth with vegetable broth and omitted bacon, but Chris did cook some to put on his. I know we’re approaching the end of soup season, but we had a cold evening last weekend and decided to give this a go. We’ll definitely be making it again.

I am trying to watch as many of the Oscar nominated films as I can before the show in late April. Not sure why because I normally don’t care a whole lot, but the pandemic has me reaching for weird goals. I’ve recently watched two and I wanted to share them with you.

First of all, it was my choice for family movie night this past weekend and my pick was Minari.  After we watched it, Sawyer asked me why I chose it.  I told him that it looked like a somewhat funny, real and touching film. But also it portrayed the hardships of a Korean family in the 1980s reaching for the American dream. After the horrific events of last week, I wanted to open my kids’ eyes to the experiences of Asian minorities in our country. This film was beautifully made and filled with characters who are quirky, but will warm your heart. I absolutely loved it.  The woman who plays the grandmother is also nominated for Best Supporting Actress, and I truly hope she wins. She made this movie. Additionally, the lead actor is up for Best Actor. Check out the trailer below.

The other movie I watched was Sound of Metal, which looked interesting to me. I had asked Chris if he was interested in watching it maybe a month ago and he’d said no. He has been traveling a bit, so I took a solo night and watched it on my own. This movie is about a recovered heroin addict who is a drummer in a punk-metal band. Ruben suddenly begins to experience hearing loss until it’s finally all gone.  He finds himself in a home for deaf addicts where he’s welcomed and accepted.  The only problem is that he can’t accept himself. This story was beautifully told, and white a bit sad, also a bit uplifting.  Check it out:

Lastly, I want to add that this is a huge year for the Academy.  The star of Sound of Metal, Riz Ahmed, was also nominated for Best Actor in a Leading Roll. This year, the ballots are more diverse than I’ve ever seen with Asian, Black and Muslim actors and actresses, film makers and stories.  Bravo, Academy! By the way, some of the nominated films are not available for me to watch, but I am going to make it through what I can. Nomadland is up next!  Chris and I already watched Promising Your Woman and loved it!

A Thoughtful and Kinda Adorable Podcast

A friend of mine recently mentioned the Renegades podcast and how awesome it was to hear Obama and Bruce Springsteen chat. I assumed it was one episode, but turns out Renegades: Born in the USA is entire podcast with their conversations. I’ve only listened to a couple of episodes so far, bu I love hearing the way these two men communicate with and appreciate one another. I mentioned it to Sawyer and he said he didn’t know who Bruce Springsteen was, so I started singing Born in the U.S.A for him, and he said, “Yeah, I don’t know that song.” And now I know I have failed as a parent. I won’t fail you.  Here you go:

My Face is Having a Midlife Crisis 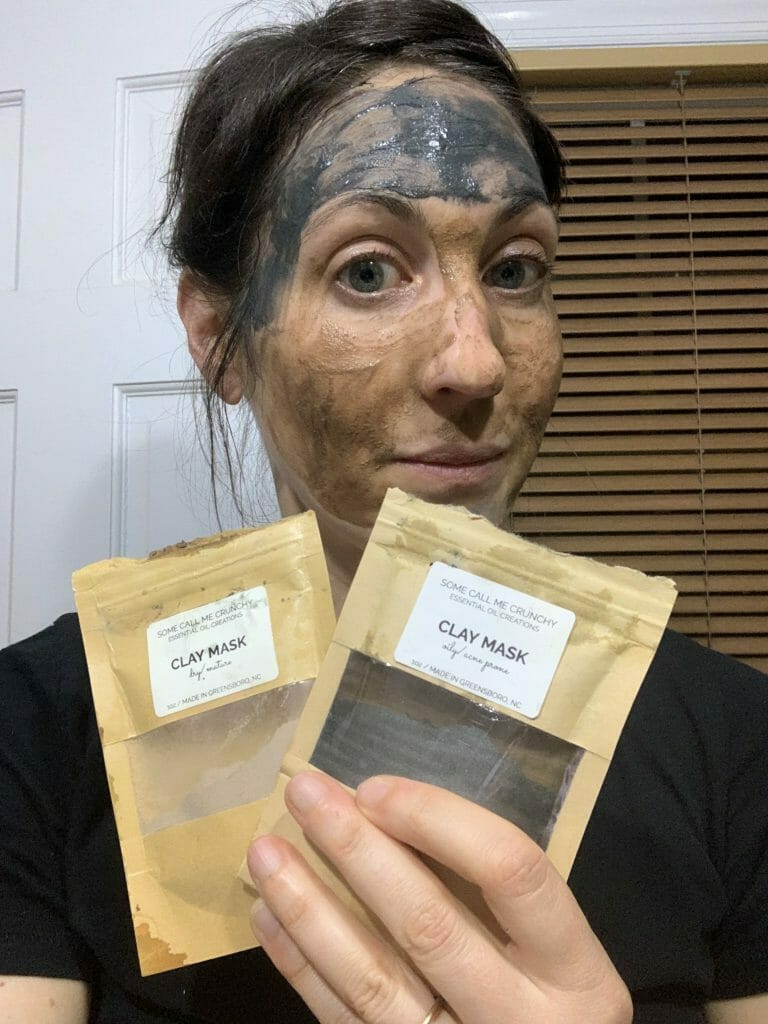 For real. My forehead says “I wanna be a teenager!” And my under eyes say, “We fit more and are more leathery than Mary Poppins’ bag.” This past week, I’ve used these two clay masks in combination as you can see, and my forehead cleared right up and my under eyes are now closer to being even with MP’s bag. I’m a huge fan of Erienne’s natural products and these little pouches of mix-it-yourself powder masks have served me well over time. You’ll get a lot of mileage from one bag! Also, if you mix like I do, you’ll look ready to go hunting.

My friend Brittany always creates gorgeous desktop calendars I like to use. She’s got 6 free options right now for April and they’re beautiful! I’m using the pink flowers in the field.  Go grab one and be instantly whisked away into a field of flowers without leaving your desk.

My friend sent this to our group chat and I felt so seen. I love dark humor and this meme had me laughing. Too good not to share with you.

Speaking of gardening, we’re prepping an area to turn it into an herb garden this weekend.  Know of any endangered herbs I might need?  😉