I am taking that title very literally this week –  it’s all about just feeling good. Last week, I mentioned that Wilder had a stomach bug early in the week. Well, come Friday night at 10 p.m., I was the next man down, followed by Emmy at 3:30 in the morning. Next came Sawyer Sunday morning followed by Chris on Monday. The good news is that my entire family of five has now had whatever it was, so we’re all done with it in this house. And we just want to feel good. It’s been sort of a long recovery for me and, as of Wednesday when I am starting this post, I finally feel like I am coming out of the lingering fog. Because I felt so bad and so off, we didn’t try any new recipes this week. The thought of many foods I normally love just made my stomach churn. That being said, I did spend time in bed with movies or, when I felt up to it, I walked and listened to podcasts so I’ve still got something to say!

This blog uses affiliate links and I am an Amazon Associate. I earn a small commission from purchases made through qualifying links.

Fantastic Podcast Episode (And a Book I need)

I am a huge fan of Brandi Carlile’s music. Between her voice, raw emotion and ability to story tell through her lyrics, she is my kind of artist. Because I’ve been listening to so many books, I’ve fallen way behind on some of my favorite podcasts and decided to see what was in my queue. When I saw that Brene Brown had interviewed Brandi, I couldn’t wait to tune in. And this episode did not disappoint. Brandi’s stories from her childhood and growing into adulthood are so incredibly powerful. She’s just the coolest human being who really knows who she is and owns herself. She embodies how I want to feel about myself – at home in my person. She’s got a new book out that I can’t wait to read!

A New Podcast I’m Excited About (With the best theme song!)

By now, you know I am a fan of Glennon Doyle, author of my favorite book of 2020. In her brand spanking new podcast, she and her sister tackle a new “hard thing” each week, answer listener questions and come up with solutions, AKA the next right thing. As only Glennon can, this podcast is real and honest and says all the things that many of us are afraid to admit or talk about. I so appreciate that she is putting this kind of content out there and am excited to listen along. By the way, speaking of Brandi Carlile, she helped Tish Melton (Glennon’s daughter) write and sing the theme song and it’s the sweetest little ditty you ever did hear. Tish is well on her way to a musical career. (I’d link it for you but it appears you have to listen to the podcast to get to it! So go listen to both the podcast and song!)

Last Saturday evening as I laid in bed feeling terrible, I took the opportunity to watch a couple of movies that had been on my radar. I read The Woman in the Window last year and absolutely loved it. A.J. Finn did a fantastic job of weaving together a unique murder mystery with several interesting characters and an unexpected twist. I wanted to love the movie as much as the book, but I just didn’t. Amy Adams was wonderful in it – as always – but it felt over-directed and focused too much on making it artsy without developing the characters enough.  Perhaps if I hadn’t read the book I’d feel differently. It still helped me pass my time and entertained me so I’m including it. You can check out the trailer here:

Next up, Things Heard & Seen had grabbed my interest because this girl loves a good haunted house story! This movie is also based on a book, All Things Cease to Appear, which I did not read. I really enjoyed this movie and loved the story and characters. The ending was somewhat disappointing – not how the story of the main character ends, but the ending of the film. (You’ll understand if you see it!) If you like ghost stories, such as The Haunting of Hill House, I think you’ll enjoy it. Check out the trailer:

You Again is a 2010 Kristen Bell movie that I’d never seen. I happened to read about it Sunday on another blog and asked Emmy if she wanted to watch it with me that afternoon while Wilder napped. If you just need a good laugh and something that leaves you smiling at the end, definitely check this one out! By the way, we followed it up by introducing Emmy to one of my all time favorite movies, Pitch Perfect – aca-scuse me! (Of course having just been sick, those barf scenes hit me a little harder this go-round!) Here’s the trailer for You Again.

Target’s new brand, All in Motion, is quickly becoming a go-to for me. I love their tops and sports bras! And the best part is that this brand is affordable, sustainable and represents all body types. They’ve got a loose-fitting light-weight tank for $16 that I’ve now purchased in a few colors. (After being ill, I took this week off running, but I will be back at it next week.) I will say, I bought a pair of their leggings in green and I never wear them as they tend to show off my cellulite which isn’t exactly one of those features I want to accentuate. So I just stick to the tops. 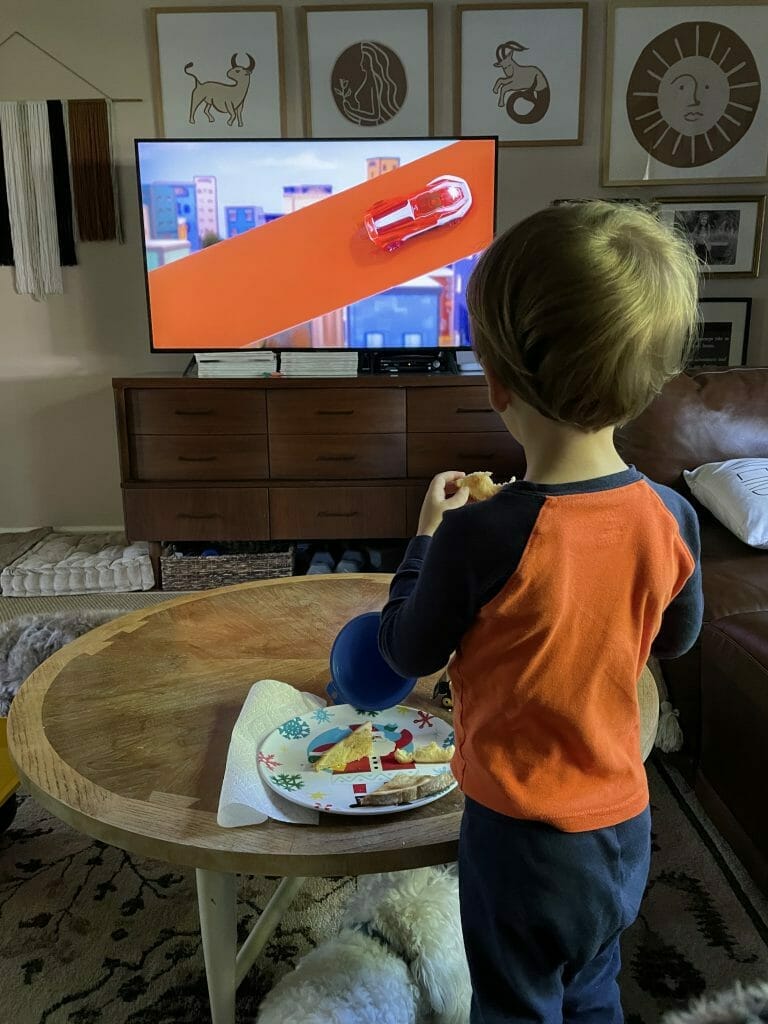 What I didn’t mention yet is that last Saturday, after being up sick all night long, I had to watch Wilder the next day because Chris had to take Sawyer to a soccer tournament 40 minutes away. Normally, I’d have asked Emmy to help me, but of course, she was also sick. It took all of my willpower to make Wilder cinnamon toast, and then I laid on the couch and let him eat it in the living room with the TV on.  I’d close my eyes, trying to stay somewhat awake, then open them to see Wilder just carefully watching me. I think he was worried. One time, my eyes were closed and I felt his cool little hand rub my cheek, just like I do to him when I tuck him in. I opened my eyes then and he just smiled at me sweetly. While it was not an easy morning, I am so grateful that he is exactly who he is. 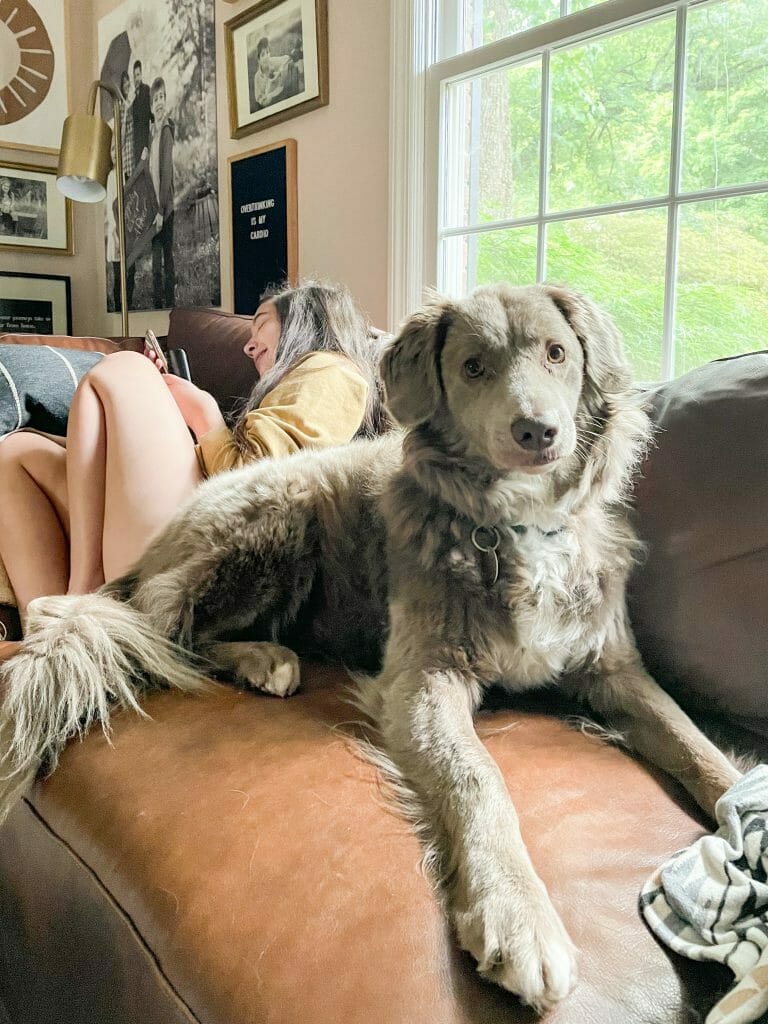 This photo cracks me up because Catcher was sitting on the couch on one end, Emmy on the other. He decided to readjust himself and sat his rear end right on top of her. She and I started to crack up, but as you can see from his expression, he wasn’t sure what was so funny. You know how we all get it in our heads that we’re still 25? I think dogs often believe themselves to be forever puppy-sized and think they can squeeze in anywhere. 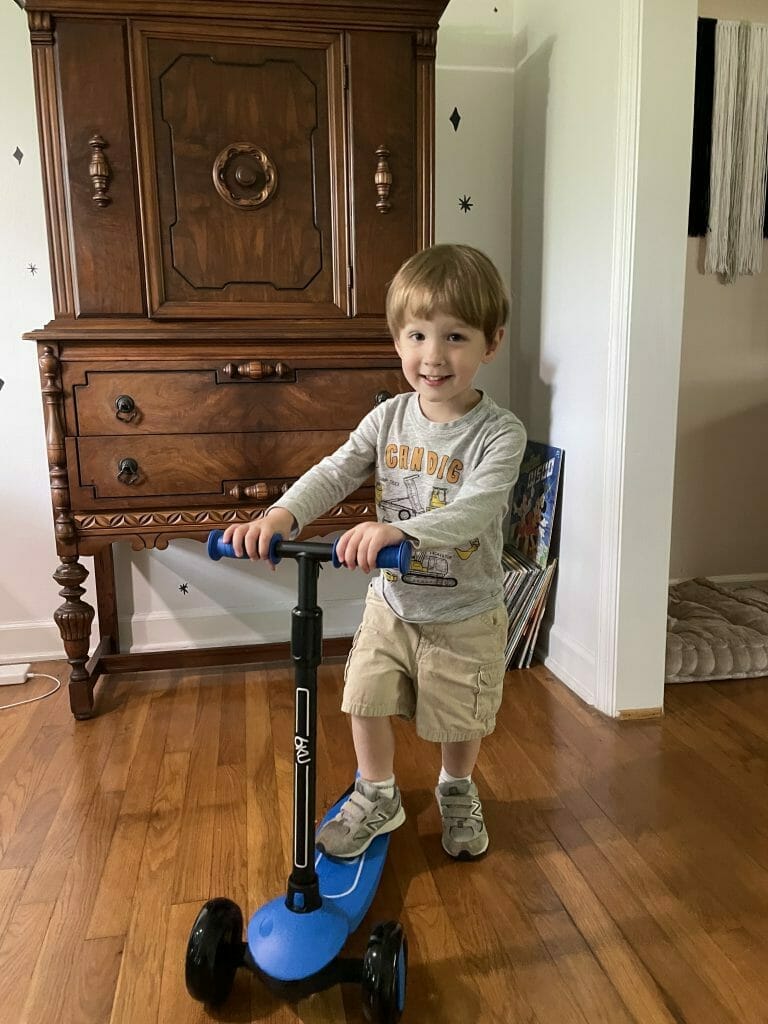 Wilder’s cousins sent him this scooter for his birthday and so far, we’re just letting him ride it around the house to get used to it. Like my other kids were, he’s apprehensive when it comes to scooters, bikes, anything that moves independent of his body. Hopefully this time inside will prepare him to take it outside soon (with a helmet, of course!). 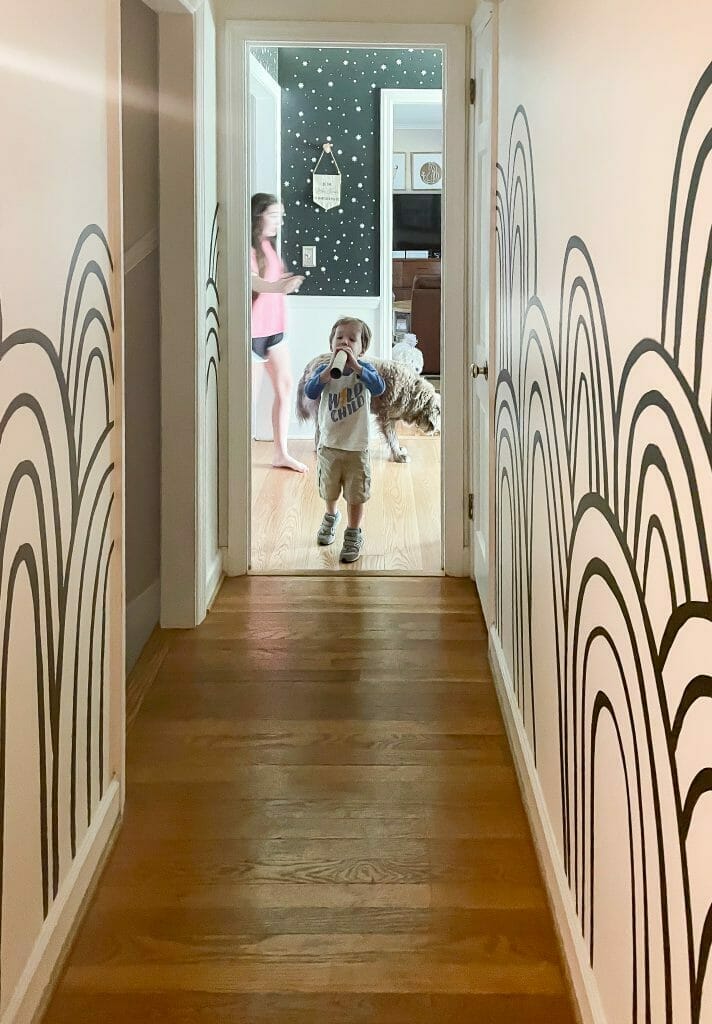 Finally, give a kid a paper towel roll, and that’s all they need. Am I right?

This weekend Emmy and I are off to explore Winston-Salem. I mean, I did go to college there, but that was over 20 years ago. She’s been such a huge help with Wilder over the last several months so we’re treating her to a little retail therapy and a mom/daughter day. What are you up to?