We are giving new meaning to feel good today. Because last weekend I was doing anything but. Wilder brought home RSV from school and I started coming down with it late last week. Friday afternoon, as soon as I got him down for a nap, I went down for the count myself and didn’t get out of bed until Sunday morning. Emmy was a huge help Friday evening before Chris got home, and then Chris took on parenting duties all weekend long. I laid in bed and, when I was awake, just marathoned through movies. Usually I try to power through, but something told me to take advantage of Chris being home and rest. I’m so glad I did because I’m much better. Of course, our week started off with Chris being involved in a hit and run while in the car with Emmy Monday morning. There was a police chase in full force and Chris was at a traffic light. The man fleeing tried to squeeze his car between Chris’ and a truck, eventually jumping out of his car and bolting. You can’t make this stuff up folks! Thankfully, Chris and Emmy are totally fine and the car only has cosmetic damage. But if you’re keeping track, that’s his second accident this year. As I said to my editor this week – and she wholeheartedly agreed – it was the Mondayest June. Thank goodness July is here and I just know the second half of 2021 is going to be fantastic. Let’s get to the good things – obviously some movies – I’m sharing today. (I am an Amazon Associate and earn a small commission on qualifying purchases made through my links.) 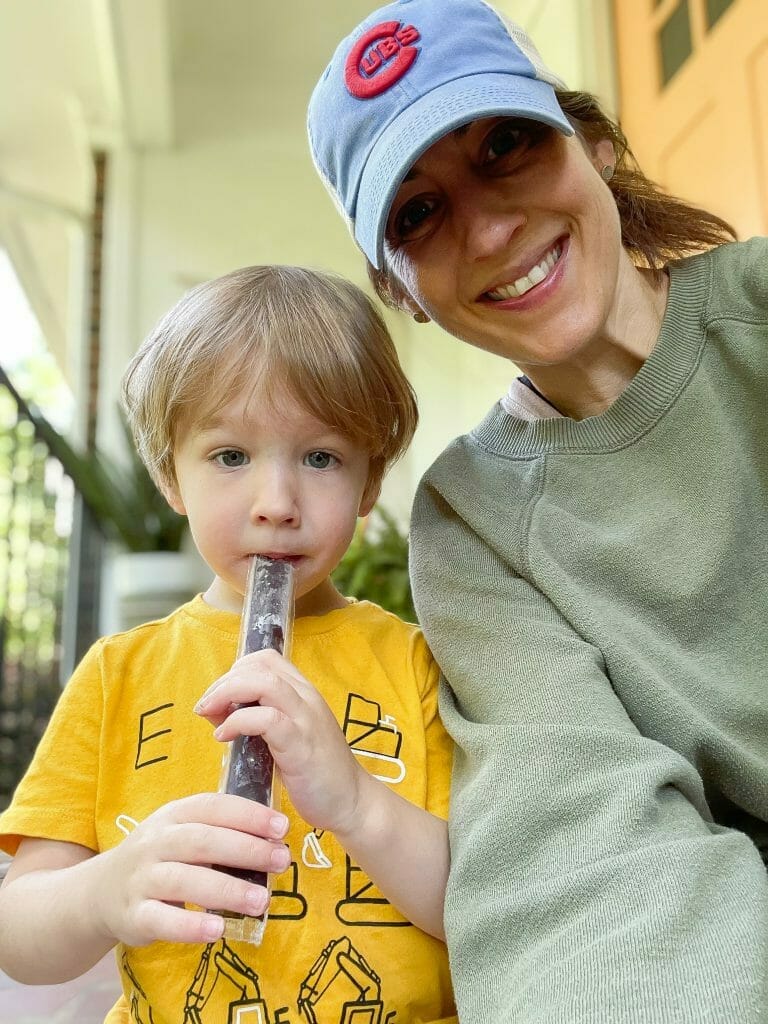 Photo taken the day I started feeling better, hanging on the porch with me best bud. 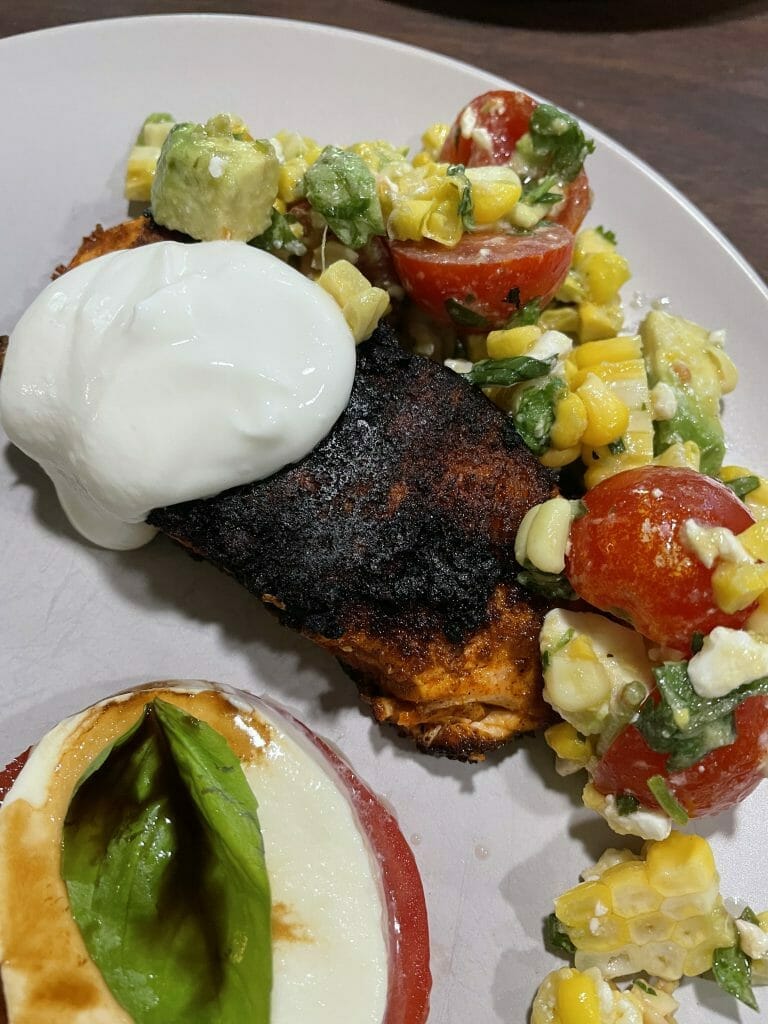 BTW did you know Chris and I like salmon? I feel like the last few weeks we’ve shared several salmon recipes, but it’s true. We love it. Sunday I was ready to eat real food again, so Chris and I decided to try a new salmon recipe from none other than my recipe guru, Half Baked Harvest. This time we selected lemon parmesan salmon with corn, tomato and avocado salad. Despite its appearance – yes, I charred it a little too long – it’s a new favorite! This dish was a little more involved but so worth it. The salad also called for chickpeas but we had made another recipe of hers last year that featured a similar salad and hadn’t enjoyed them in it, so we omitted them this time.  As you can see, we served it with a Caprese salad and lemon green beans, made with love from farmers market goodies.

As I mentioned, I watched movie after movie this past weekend and I am going to share two of my favorites with you today. I’ll try to save others for a later date so I don’t overwhelm you with stuff to watch.

The Jane Austen Book Club is about an unlikely book club that forms after one woman loses her beloved dog. It’s about friendship, love, Jane Austen, and how human connection can help us get through some of the hardest times. Originally released in 2007, this film features a stellar cast. I’d never seen it, but it’s now streaming on Amazon. Check out the trailer here:

Summer ’03 is a coming of age story that had me laughing and crying. The story begins with Grandma Dotty, on her deathbed, telling 16-year old Jamie two secrets. The burden of these secrets lead her into a Catholic church, where she meets charming Luke, who’s just shy of becoming an ordained priest. Maybe it hit me at just the right time, but I really loved this movie! I thought the cast was absolutely perfect and the characters quirky and real. I wish Emmy had been in my bed to watch it with me, because I think teen girls will enjoy it as well. Warning: There is talk of blow jobs and there are a couple of minor sex scenes. Just want you to know before you hunker down with your own daughter and then cuss me out under your breath. Check out the trailer: 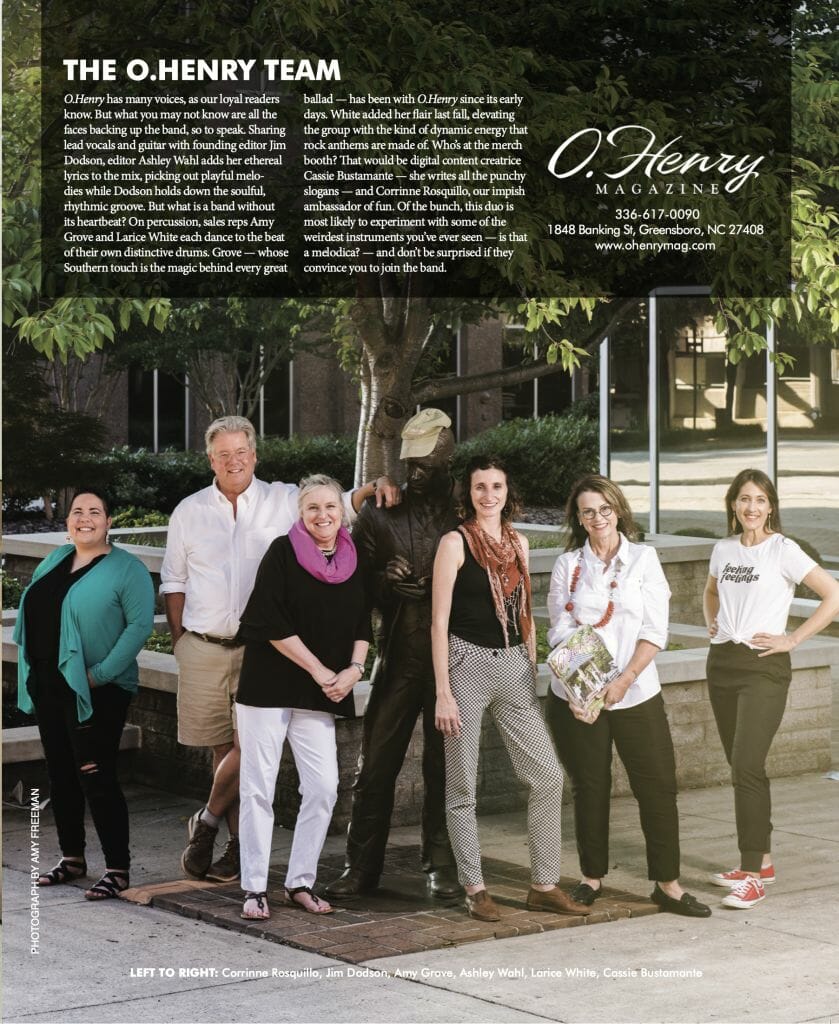 I know I recently shared my work family with you, but I wanted to show you the resulting page from our photo shoot. This page was in our July issue and I am just so proud to be a part of this team. Ashley, my editor, texted me the photo after she saw it and said it looked like I was standing in a beam of heavenly light. I told her that either the heavens opened up and delivered me onto O.Henry magazine, or they called Beetlejuice three times and I appeared. No matter how it happened, I’m so dang glad to be here. And not to spoil anything for next month . . . but wait until you see the August cover! By the way, Ashley’s the one who wrote our description, and she pretty much nailed it.

After enjoying a movie that starred Lily Collins (BTW, did you know she’s Phil’s daughter?! I had no idea!), I decided to give Emily in Paris a try. Honestly, I don’t indulge in shows like that often because I can’t watch them with the family (a little too adult for the kids). If I am going to watch a show by myself, I generally choose something darker, like Handmaid’s Tale. I’m so glad I gave this show a chance because it’s sweet, funny and the episodes are so short that it’s easy to blow through quickly. It was the perfect choice for what to watch this week while I wasn’t yet 100% nor quite ready to return to the book I’m reading.  Of course, it’s left me with a desire to be young, beautiful and living abroad. Can I got back in time? Anyone have a Delorean I can borrow? Check out the trailer below:

When I heard Brandi Carlile on Brené Brown’s podcast, I immediately used my library app to put a hold on the audio version of her book, Broken Horses. I thought about ordering the hardcover, and I may still, but the audio version is incredible. She’s a beautiful storyteller, as her songs relay, and she’s had an incredibly interesting life. Throughout the book, songs are interwoven, but not prerecorded versions. No, instead, you hear her pick up her guitar and just start playing from her heart. She includes Elton John’s Honky Cat and Neil Young’s Philadelphia. I am less than halfway through, but I am loving it so far. Her rendition of Philadelphia brought me to tears. If you’re looking for something to listen to while you walk, commute, drive – make it this. 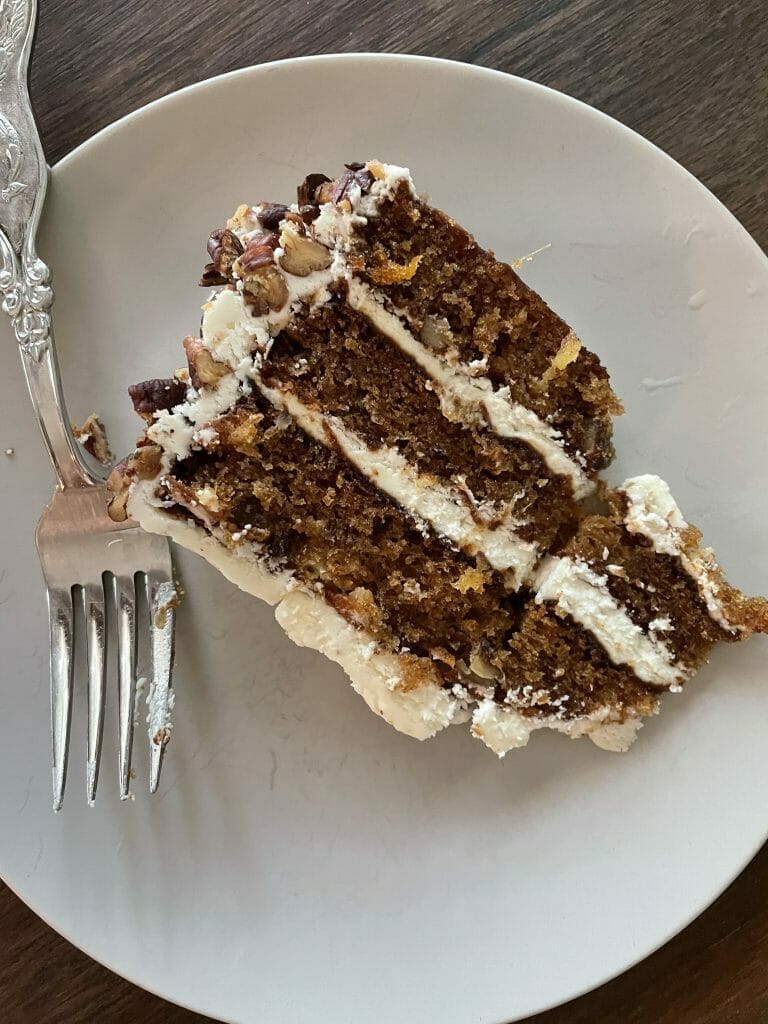 One of the worst parts of getting sick was all of the plans that I had to cancel. We had dinner plans at a neighbor’s house Friday night (and the hostess knows my favorite cake is carrot and had baked it!), I was supposed to meet one of my favorite influencers at one of my favorite Greensboro hangs Saturday morning, and we had a retirement dinner for another friend Saturday at a restaurant I was excited to try. All of it, cancelled. Well, the silver lining is that my generous neighbor (whose online bakeshop is open for all you locals) brought over a wedge of carrot cake for us on Saturday. By Sunday after dinner, I was finally ready to try it. And, let me tell you, it was heavenly! The cream cheese icing was edged with toasted pecans, and the cake itself had the perfect texture and flavor. If I am ever in prison and being granted one last meal, make it this, K? 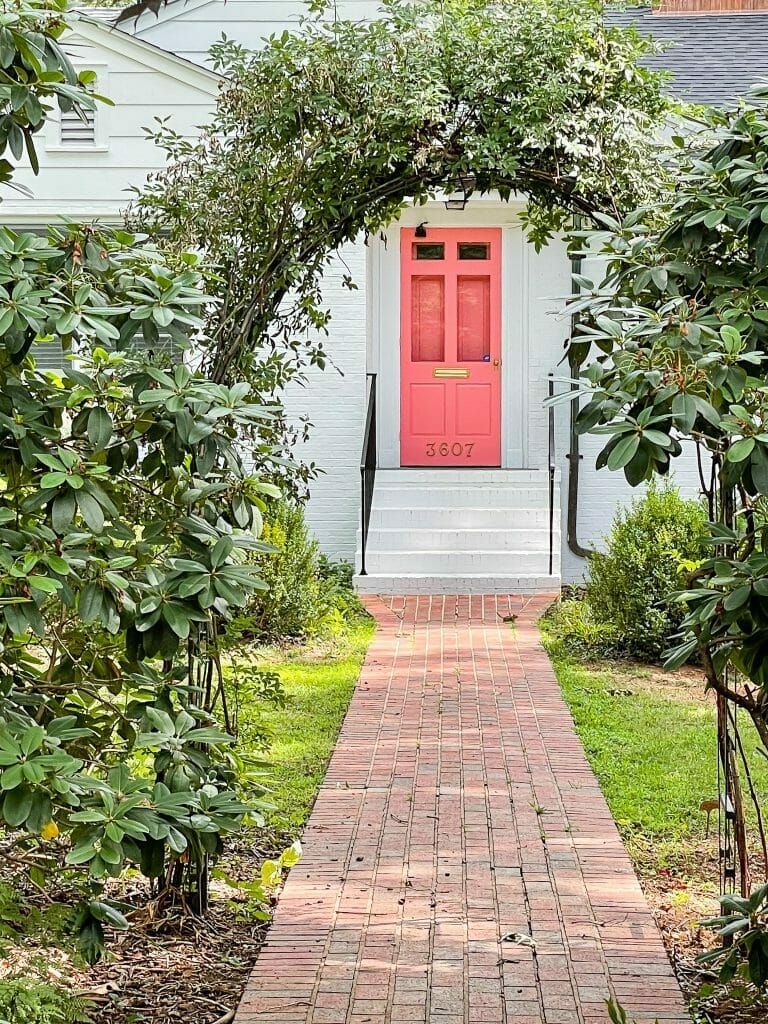 I took a little stroll last week and came across this happy front door and wanted to share with you. Isn’t it so inspiring? One day, I hope to have our house painted white, remove the shutters, and let the door just stand out like that. 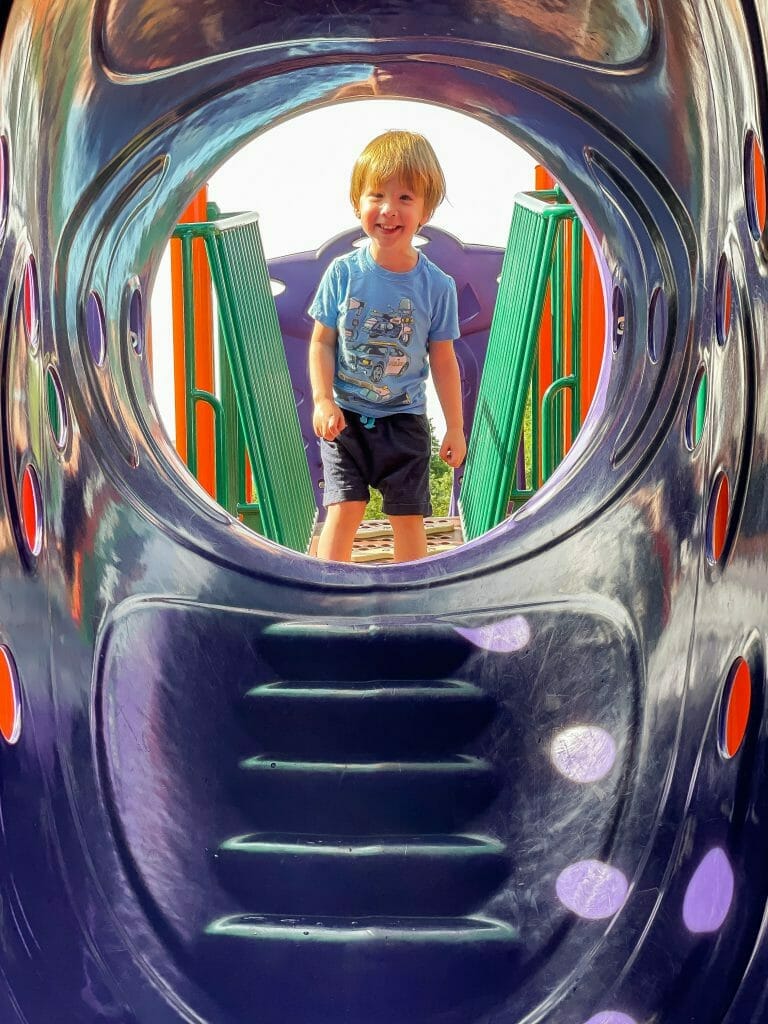 Last Friday morning, before I fell ill, I took Wilder to the playground. We haven’t gone much because of germs and Covid, but he’s pretty much had it all – minus Covid – the last couple of months, so I figured, what the heck. The joy on his face was worth it. He had so much fun climbing, sliding, swinging, running. He’s been out of summer school this week for their break, so I actually tried a different schedule that had me working early morning and then playing outside with him late morning. It was a perfect change for this week because he was happy and I was able to get my work done without being stressed. It was a rare moment of winning. I’ll take it. Sometimes I feel utterly exhausted, but when his little voice says, “Mama, dance with me,” or “Mama, will you race with me?” I want to be in the moment with him, even if I’m busy or overwhelmed. One day I’ll look back on these days and be so grateful that I said yes to him. I don’t always say yes, but I make sure that I do it enough that he knows I love spending time with him. It’s like that old Harry Chapin song, Cat’s in the Cradle:

I’ve long since retired, my son’s moved away
I called him up just the other day
I said, I’d like to see you if you don’t mind
He said, I’d love to, dad, if I can find the time
You see, my new job’s a hassle, and the kids have the flu
But it’s sure nice talking to you, dad
It’s been sure nice talking to you
And as I hung up the phone, it occurred to me
He’d grown up just like me
My boy was just like me

And with that, just a reminder to take time – even when you’re overwhelmed and the last thing you think you have is time – for those little magical minuscule moments that matter so much in the bigger picture of life.