The other morning I went for a run at the same time as usual, 5:30 a.m. When I finished, I noticed something. I mean, something in addition to the sweat and usual struggle. The sky was still dark at 6 a.m. While most people lament the shortening days, I’m team, “Bring it on!” I love the cooler, darker mornings. And I also love being able to get my three-year-old to bed before 9 p.m. Look at that, we’re not even through the intro and I’m already sharing things that have made my week lovely. What about you? Are you team shorter or longer days? This week I’ve got some recipes, meal ideas and fun ways to spend those shortening days. 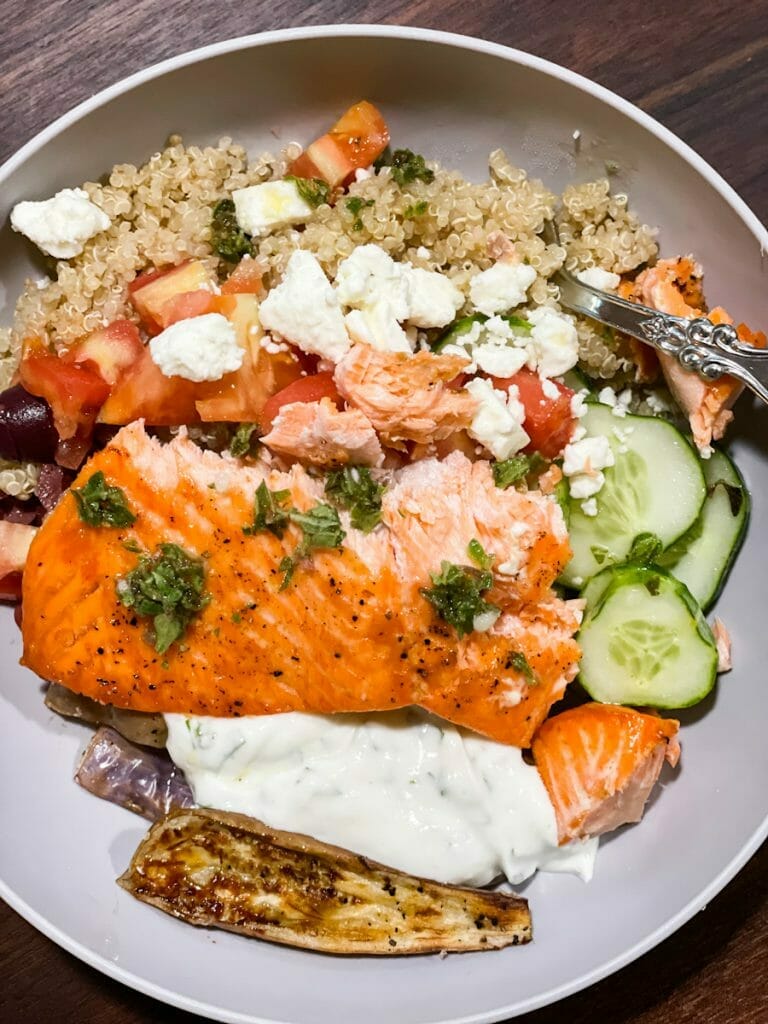 This past weekend I was in the mood for a Greek inspired bowl with salmon and came across this simple recipe. We had green beans from the farmers market, so it was a solid, simple and healthy choice. Chris and I both thought the recipe looked like it needed a little something extra, so I made this fairytale eggplant recipe again which has a yogurt lime chili sauce that complemented the bowl perfectly. We both agreed it was a smart move to add in and gave the dish much more flavor. 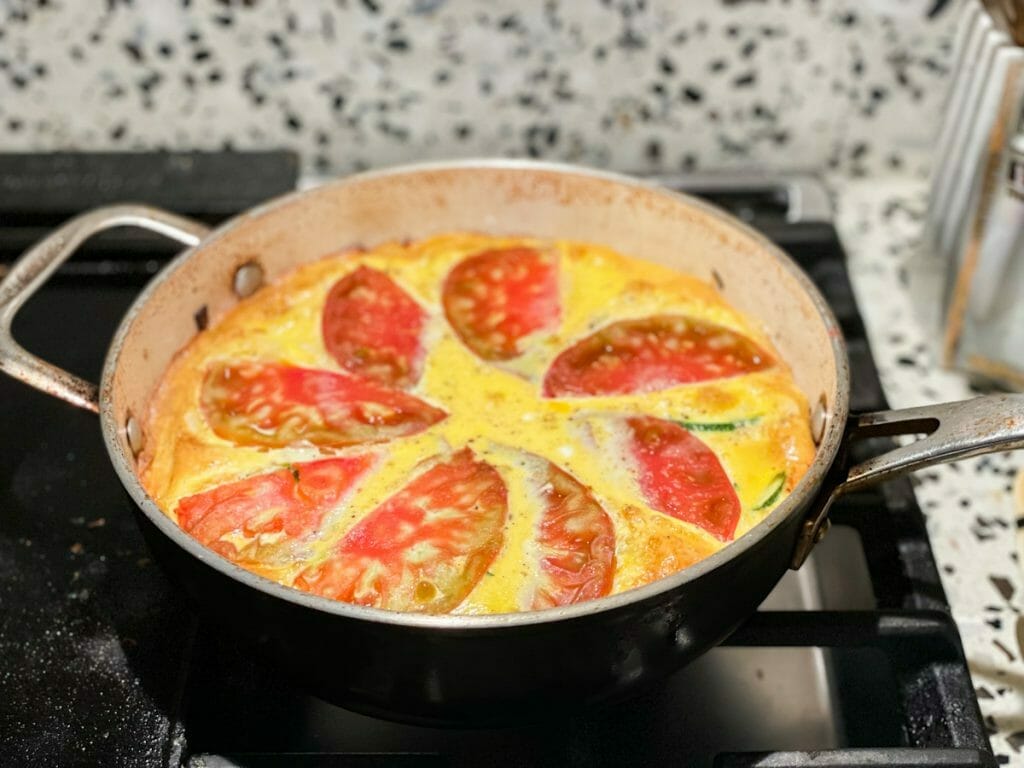 How about a recipe that’s not a recipe? We love to make frittatas for simple and healthy meals. I picked up some fresh zucchini and summer squash and decided to make one this week for dinner. First, I preheated the oven to 400 degrees. I diced a sweet onion, sliced the zucchini and summer squash thinly, sliced an heirloom tomato and cut in halves. In a bowl I whisked together 8 eggs, about 1/4-1/2 cup almond milk and salt and pepper to taste. I heated olive oil in an oven safe pan, and cooked the onion until it was translucent. Next I added the sliced squash and zucchini and cooked about 5 minutes, stirring. Next I added in the egg mixture and let it cook a few minutes, then sprinkled on some vegan mozzarella (You can use whatever cheese you prefer.) After the egg cooked a little more, I placed the tomato in the pattern you see on top and put the pan in the oven to bake until it was totally set. Et voila! Super easy and healthy dinner that provides leftovers for a few days.

Anne Lamott, how do I love thee? Let me count the ways. Seriously, this woman says what we all feel and think, but are too ashamed to talk about. I find it so refreshing. She was recently on Tim Ferriss’ podcast and they had a 2 hour conversation which was just SO GOOD. Here’s a little excerpt from Anne:

You don’t think yourself into having a warm, generous heart. You act your way. You do loving things for other people. And so I pray to have that awareness. I pray to be paying attention to life all around me. To the golden crown sparrows that migrate through my part of the woods in the fall and to the daffodils that are only here for two months, with their crazy orange and yellow clown frills. And to the little bit of green shoots that somehow, I don’t know how, break through the concrete. And to pay attention.

But First, Lemme Take a Selfie 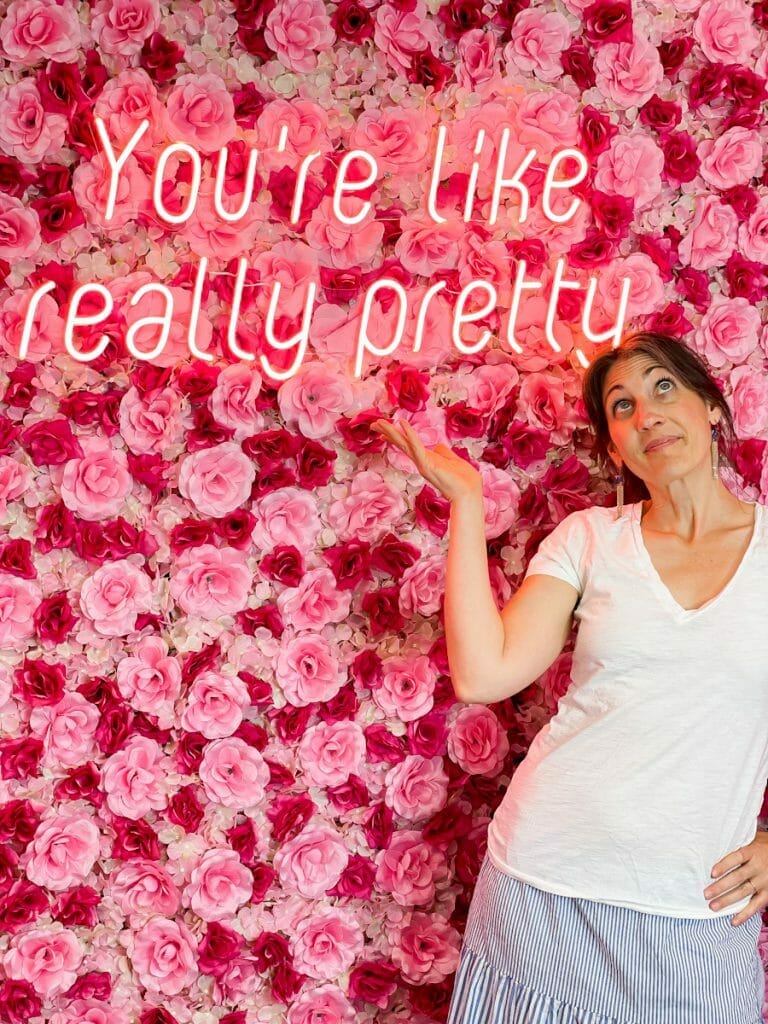 If you’re local or within reasonable driving distance to Greensboro – and love yourselfie, like, a lot – there’s a new business in town you’ve got to visit. The Selfie Spot, located in the downtown area on Elm St., features all sorts of fun stations filled with photo opps. 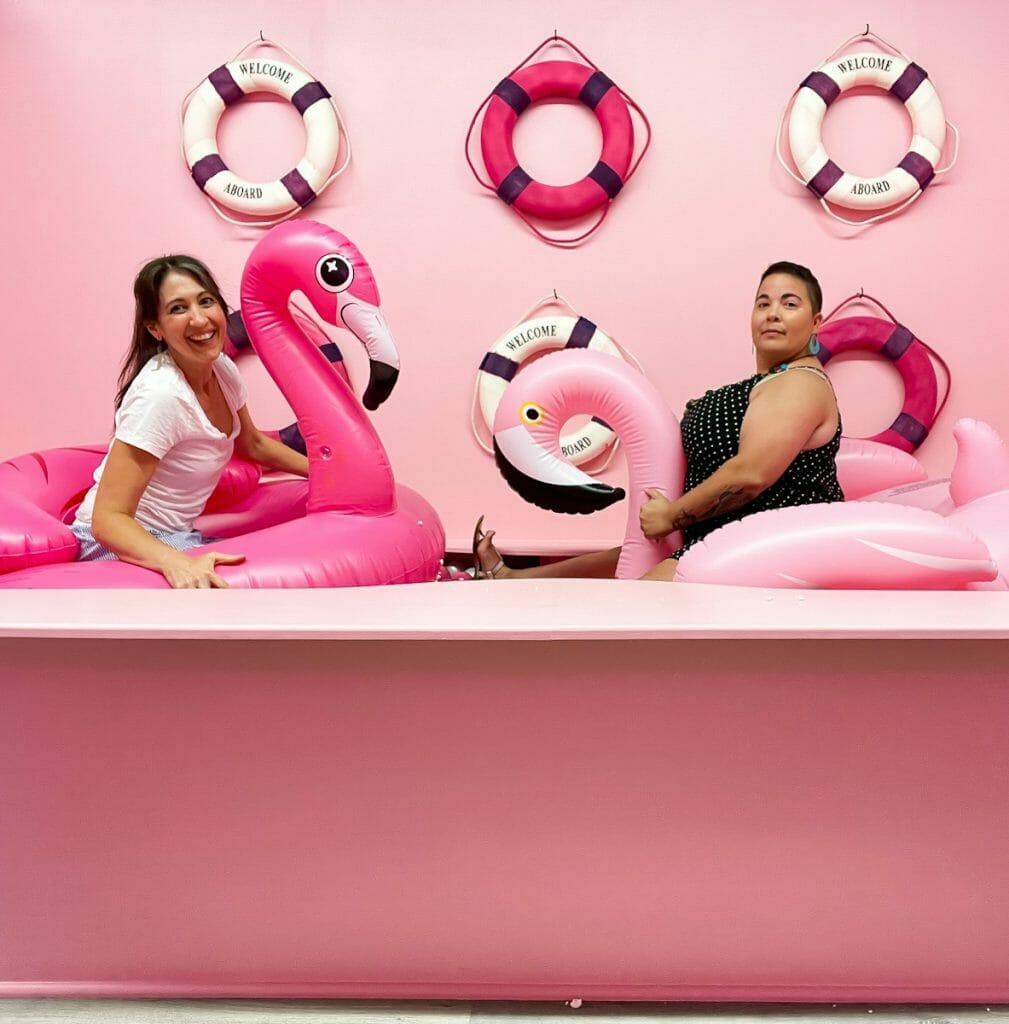 I went to the soft opening (it officially opens today!) with my coworker last week. She’s basically a model and manages to look fantastic in every photo, nailing her expression. I, on the other hand, like to make things as awkward as possible. But I still had a blast! 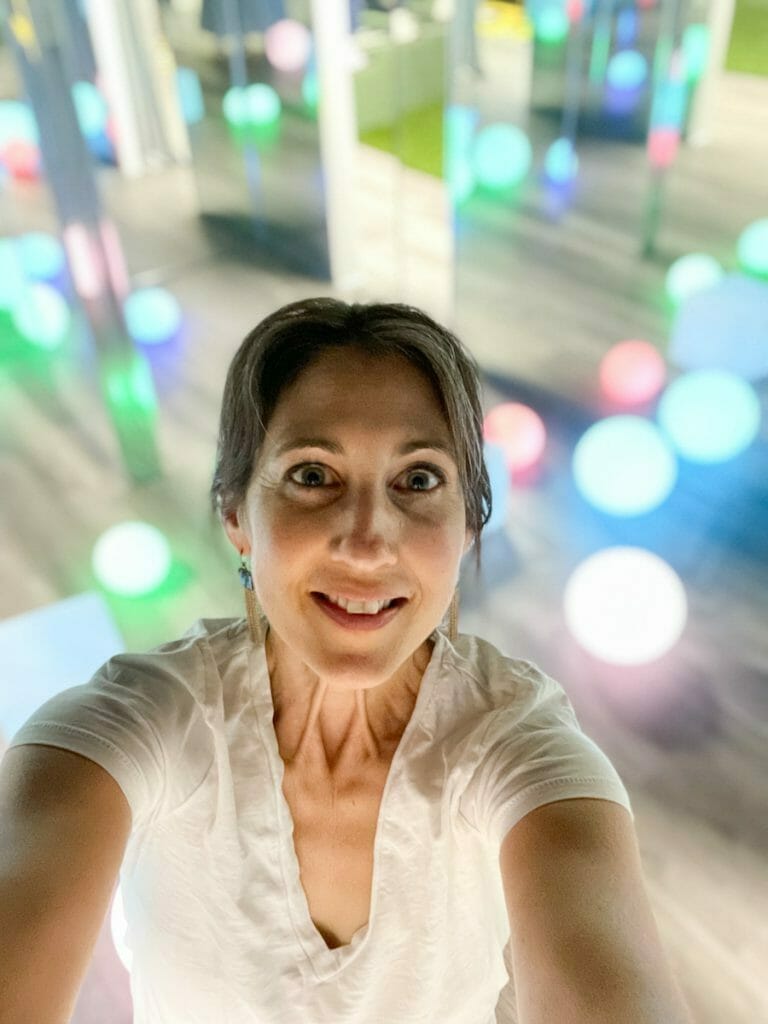 If you plan to go, make sure you book an appointment first. And pack wardrobe changes. 😉 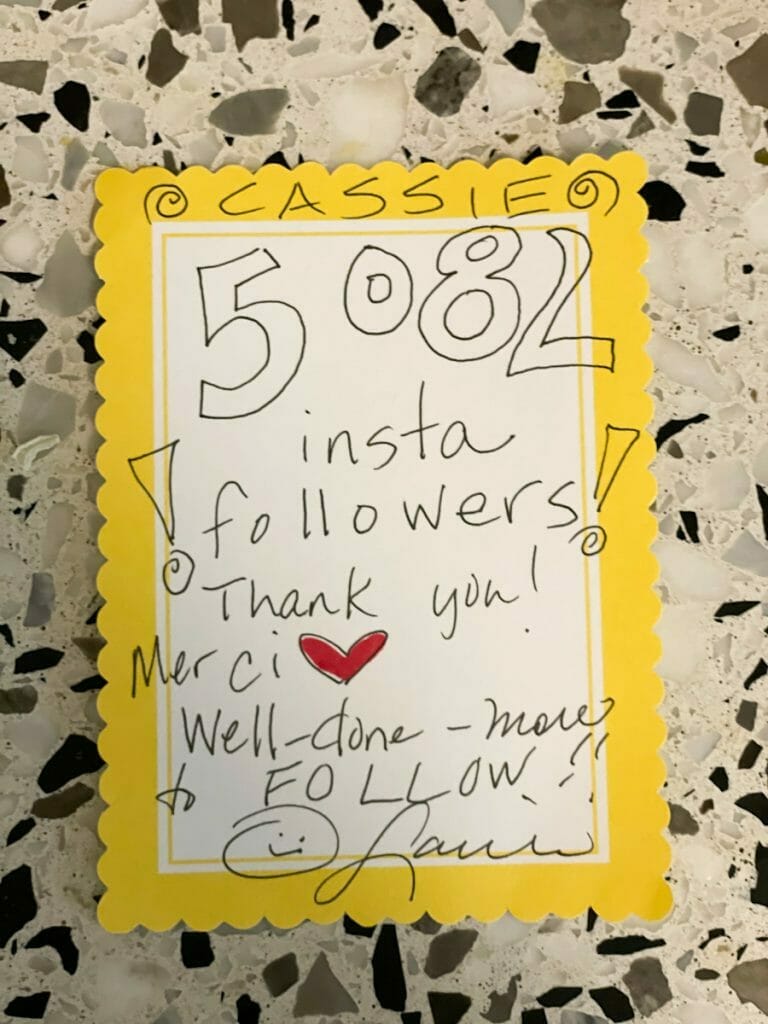 When I started working for O.Henry Magazine and managing all of the social media accounts and newsletters last fall, we had around 2000 followers on O.Hey Greensboro’s instagram account. My goal is to get us to 10k and we are halfway there! My lovely coworker Larice sent me a congratulatory note in the mail which I thought was so sweet! I love working with a team that lifts one another up. Also, I do know that 5k might not seem that big to some of you, but remember that we are working with a totally local niche, so it’s harder to do, but I am confident we will get to 10k sooner rather than later.

Cross-Country Star in the Making

OK, star may be an exaggeration, but Chris and I finally convinced Sawyer to give the cross-country team a try. We’ve been having this conversation for years and he always resists, but we both just knew – to our core – that it would be a good move for him and that he would enjoy it. He started practice this week, to much resistance because it’s at 6:45 a.m.. I’ve noticed a big change in his mood and the best part is what he said to me one morning. In general, my family thinks I’m nuts for getting up so early to run or walk. They’re a bunch of night owls. After getting up early for practice this week, Sawyer said to me, “Mom, now I know why you get up so early to run.” I replied, “Oh, yeah? Why’s that?” He said, “A couple of the guys and I were talking about how the hardest part is getting out of bed, but once you’re there and running, it’s so nice that nobody else is out.” I love that he’s finding peace and friendship in the early hours. 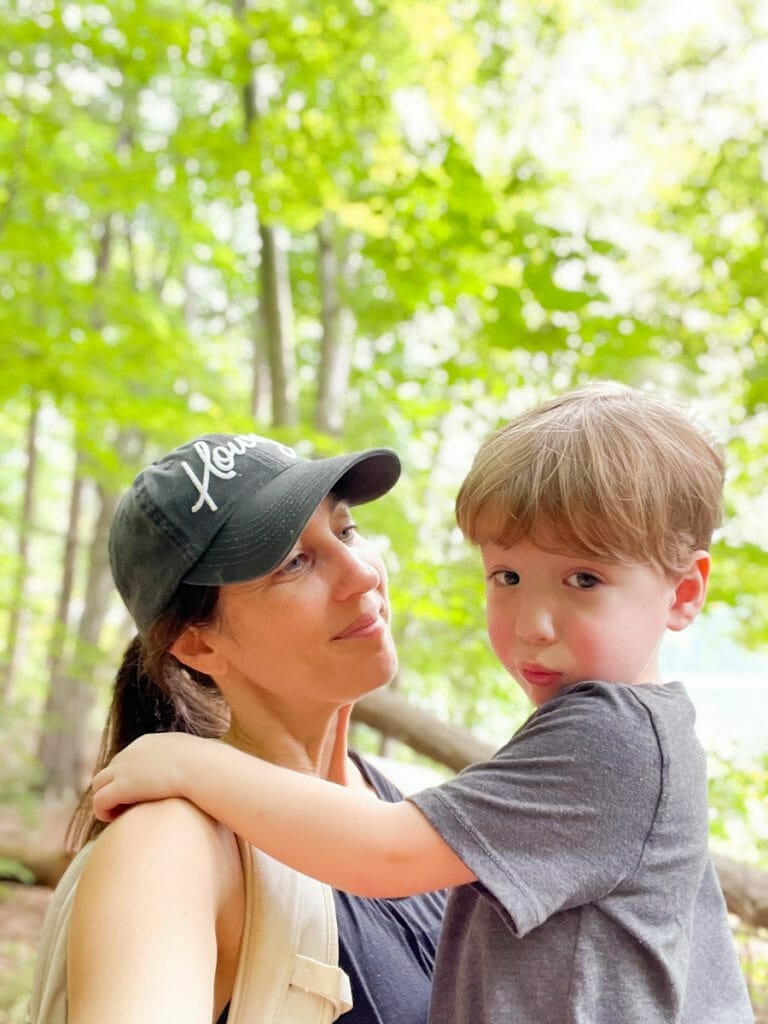 Last week, I shared a hike I did with my oldest, but last Friday I took my youngest out for a hike. I selected a new to us place, the Piedmont Environmental Center, which has a 1.8 mile loop I figured would be short and easy for little legs. I thought wrong. After about 3/4 mile Wilder was DONE. He kept sitting down, asking for water, asking to be carried. I did carry him quite a bit and took the photo above when he asked me to because I thought it was hilarious. That face gets him everywhere with me. A few steps later he asked to take another photo so he could look happy: 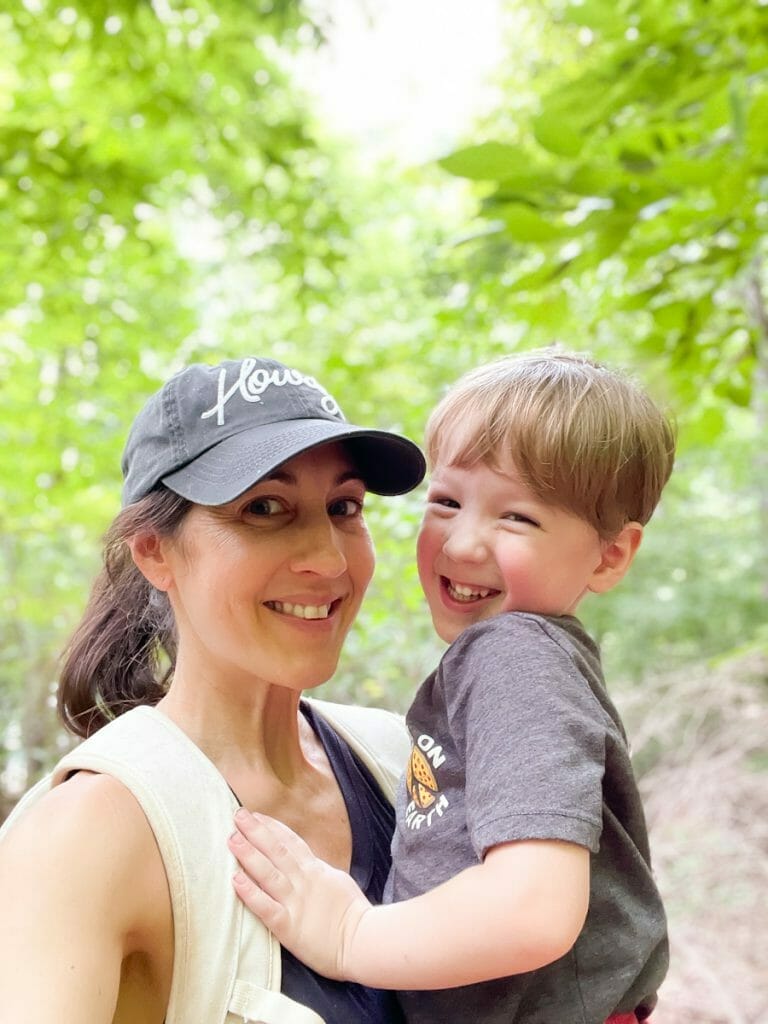 Nailed it! Even though he was tired, hot, thirsty and complaining, he remembers it as a wonderfully fun time. He talks about the deer, turtles, dragonflies and birds we saw. In the end, I consider it a win and we’ll keep going, even if I have to carry him. Plus, if I carry him, I figure I earn wine or ice cream, right?

This week, we had plans to meet friends at their pool but they discovered they’d been around people who came down with a stomach bug. We’ve had enough of sickness in our house this summer and decided to play it safe. Wilder had been stoked to go and kept asking if it was time yet, so instead, we jumped in the car and headed to the Greensboro Science Center. We love having a membership there because we can easily pop in to kill a couple hours and not feel like we have to do the whole thing. 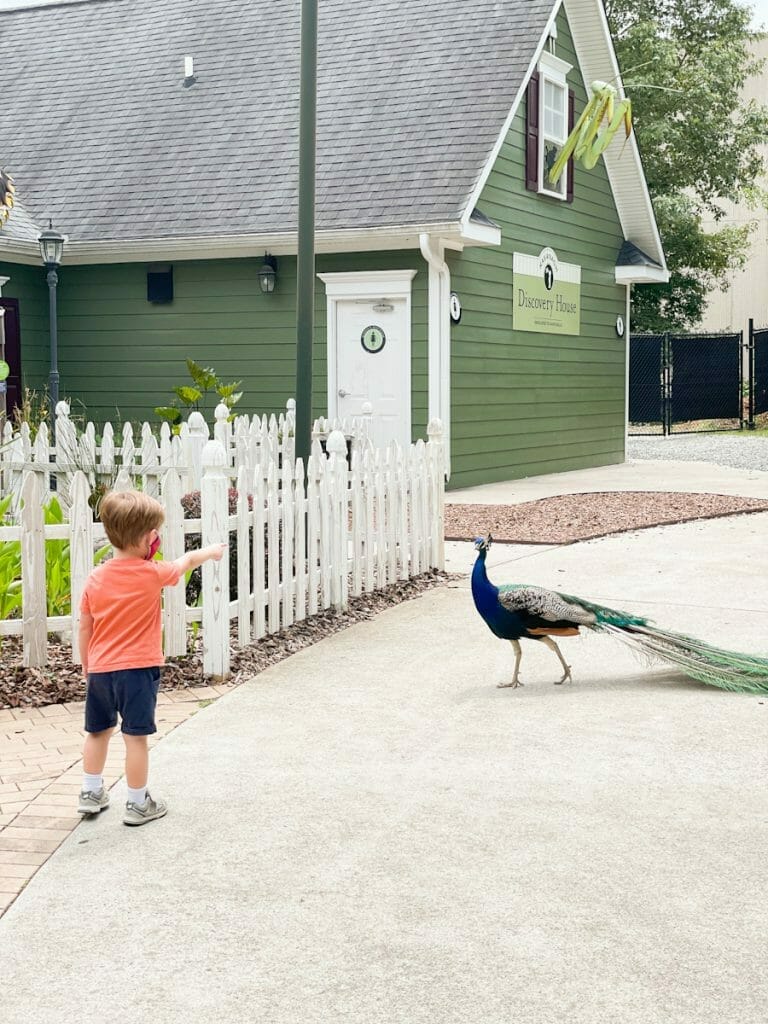 Wilder put this peacock in its place. This photo just cracks me up!

We also checked out the new Caribbean flamingos who are incredibly photogenic. They should hit up The Selfie Spot. 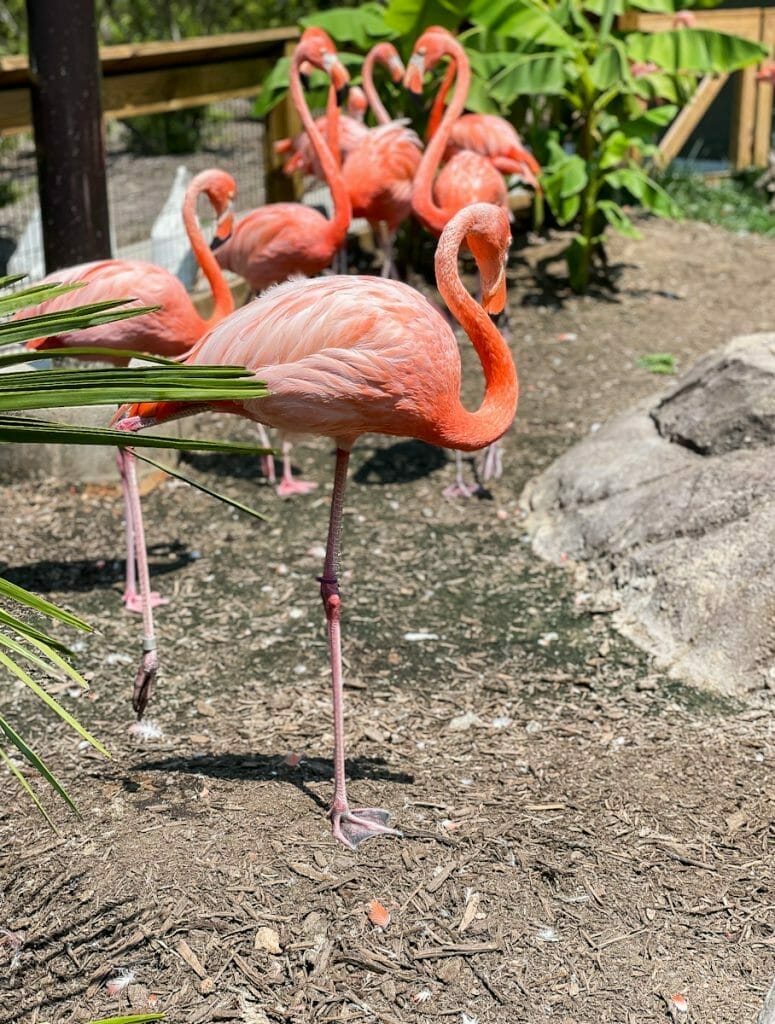 Well, friend, I hope that you have a wonderful weekend. I’m headed to a wine night with a couple of girlfriends this evening, the farmers market and a celebration for a friend who’s getting married tomorrow. Sunday, we’ll celebrate Sawyer’s 16th and my 43rd birthdays, which technically fall on Monday, but Chris starts his 5 weeks of training that day and will be gone all week. The gray streak in my hair will be getting wider over the next month.