Next week we officially kick off fall and this girl is here for it! March may come in like a lion and leave like a lamb, but October – which will be here before we know it – comes in with its own pumpkin parade and leaves us with a hard-earned too-much-candy belly ache. I can’t wait. I’ve made myself a “Fall Vibes” playlist that has only my favorite mellow and depressing songs on it (I love that kind of music, especially this time of year), I’ve started easing in fall decorations and I’ve been baking more. Muffins are in the oven as I type. Possibly in my mouth by the time we end this post.  Just the idea of autumn puts a spring in my step that reaches all the way to my fingers as I bounce around on my keyboard to bring you lots of goodies today. 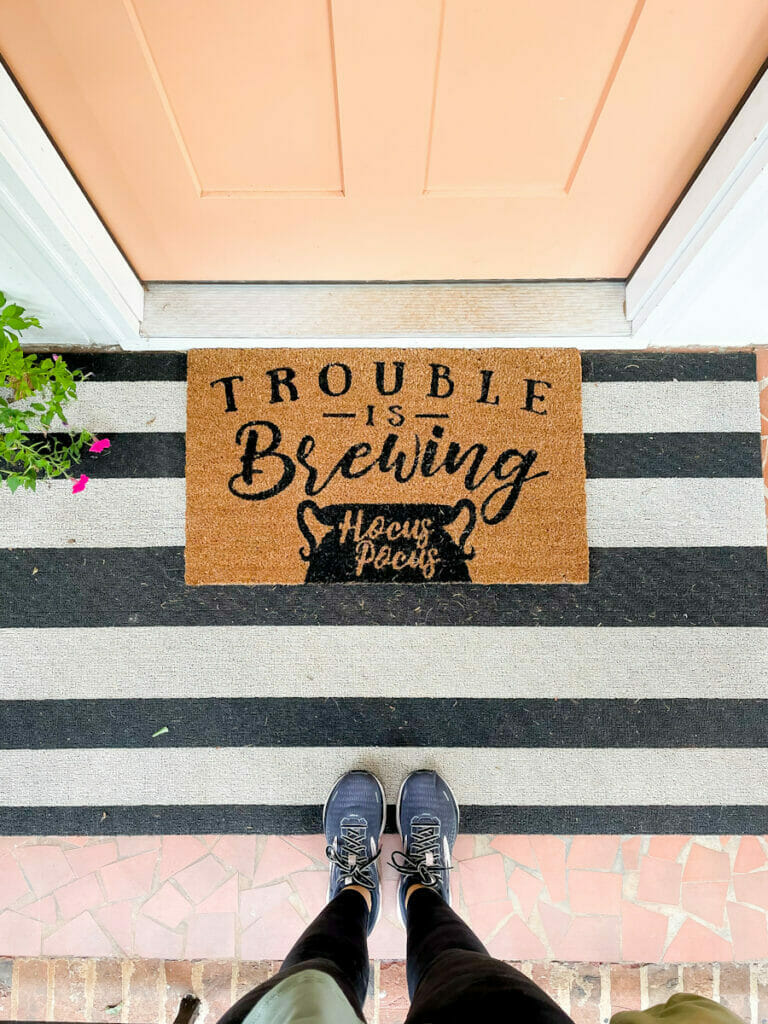 This blog uses affiliate links and I am an Amazon Associate. I earn a small commission from qualifying purchases made through my links.

I’ve had my eye on a Ouija board door mat because I’ve always been equally fascinated and creeped out by them. (Ouija boards, not door mats.) I’ve never owned a board, but there’s a small part of me that really wants one. Emmy would love it, too, because we’re both bewitched. Anyhow, last week, my little spirit sister – OK, daughter – and I were perusing TJ Maxx and came across this Hocus Pocus mat at only $9.99. Well, we’re also fans of the Sanderson sisters and other witchy wonders, so it jumped right into our cart. I couldn’t find it online anywhere, but this one is fun and perfect for our house. 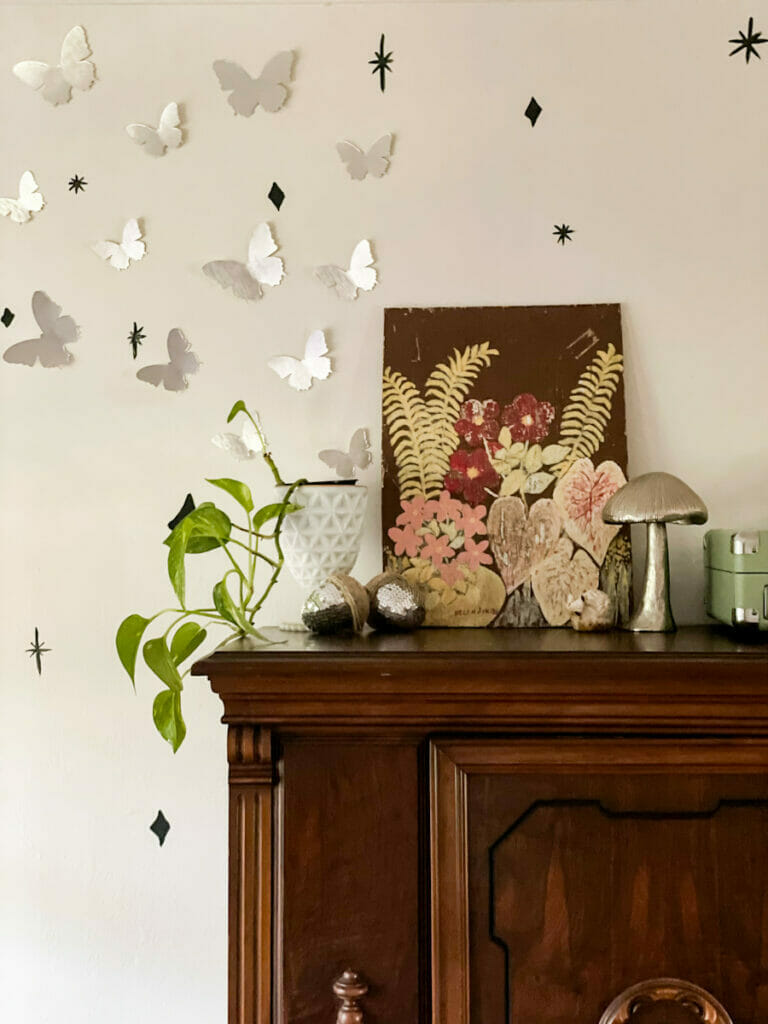 I wasn’t sure what I would do to decorate for fall this year, but I had these silvery butterflies I made with my Cricut, a silver woodsy mushroom, silver sequin acorns a friend made me years ago and a thrifted painting filled with earthy fall color. It all seemed to say “woodsy fall” to me, so I created this little vignette.

I’ve got two sweet and cinnamon-y recipes for you today. Let’s start with my personal fav: apple crisp. 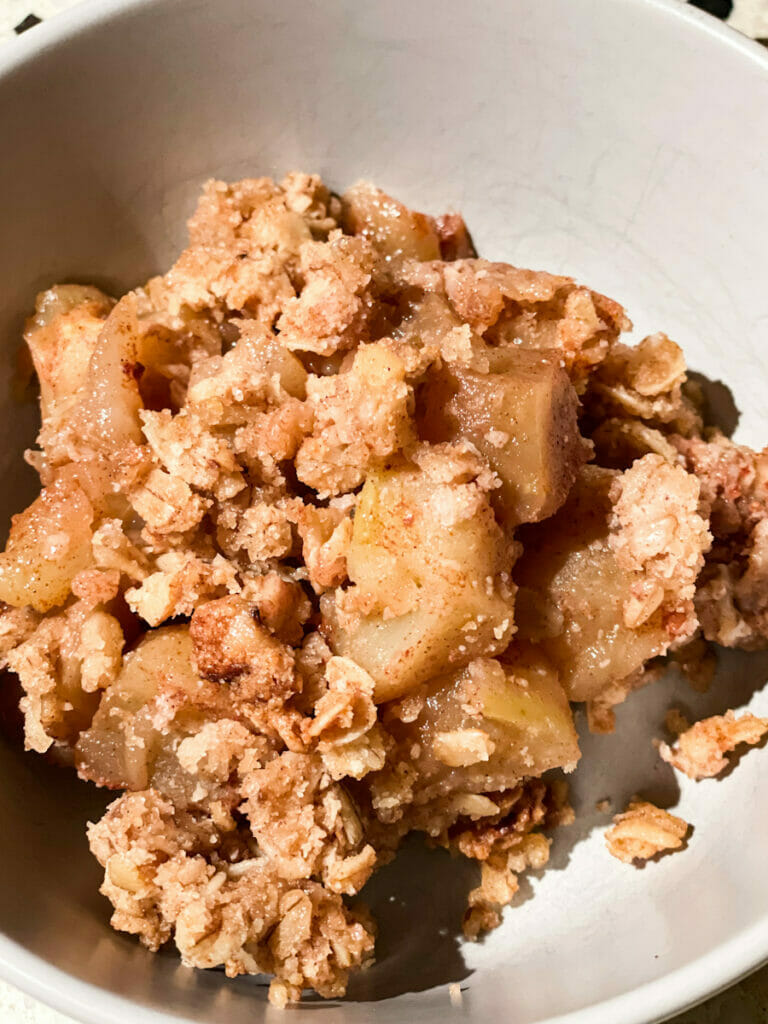 We celebrated Chris’ birthday on Tuesday this week. He and I share a love for apple crisp so I decided to bake that treat for him. Of course, we both love the classic version made with flour, butter, sugar and oats, but I wanted to try a healthier version. This recipe used pure maple syrup as the sweetener plus lots of cinnamon so I knew it would be good. Was it the same as the classic? No, but it was delish and my hips are better for it. 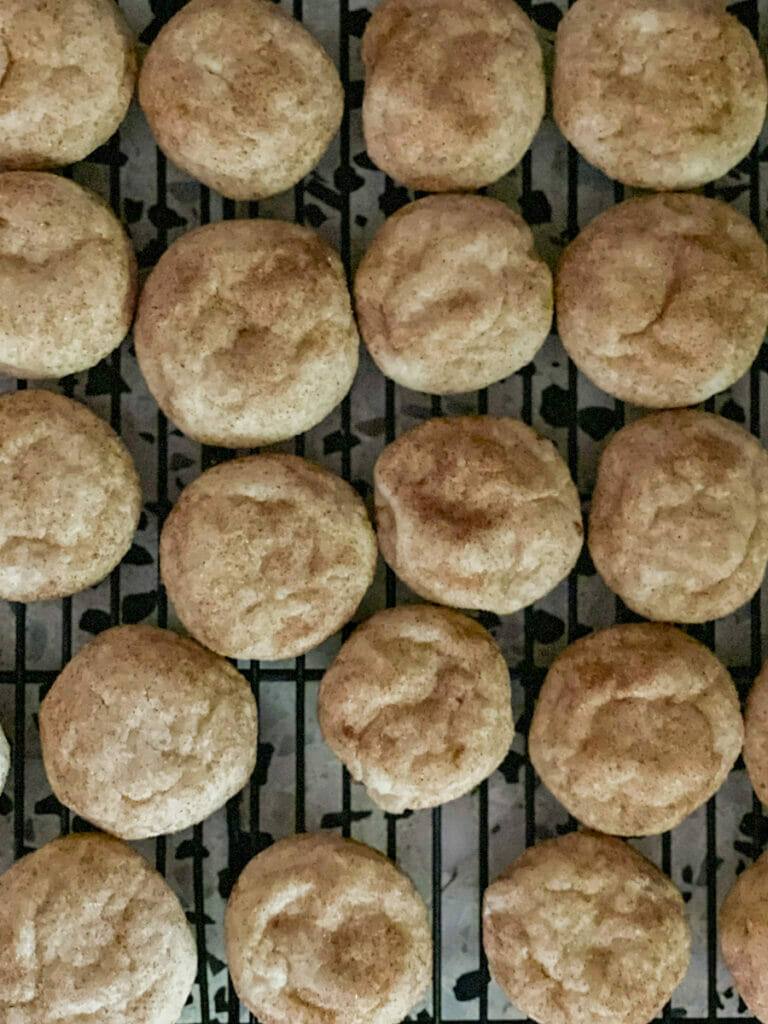 Emmy has been wanting snickerdoodles for a while and I kept forgetting to buy cream of tartar. Finally, last week I remembered and made them while she was at school one day. She walked in to a house that smelled of cinnamon sweetness and cookies. This recipe was really easy to follow, well-rated, and the cookies are winners here. Well, except for with Wilder, who says he doesn’t like them. There’s no chocolate so . . .

Let me see your sushi roll 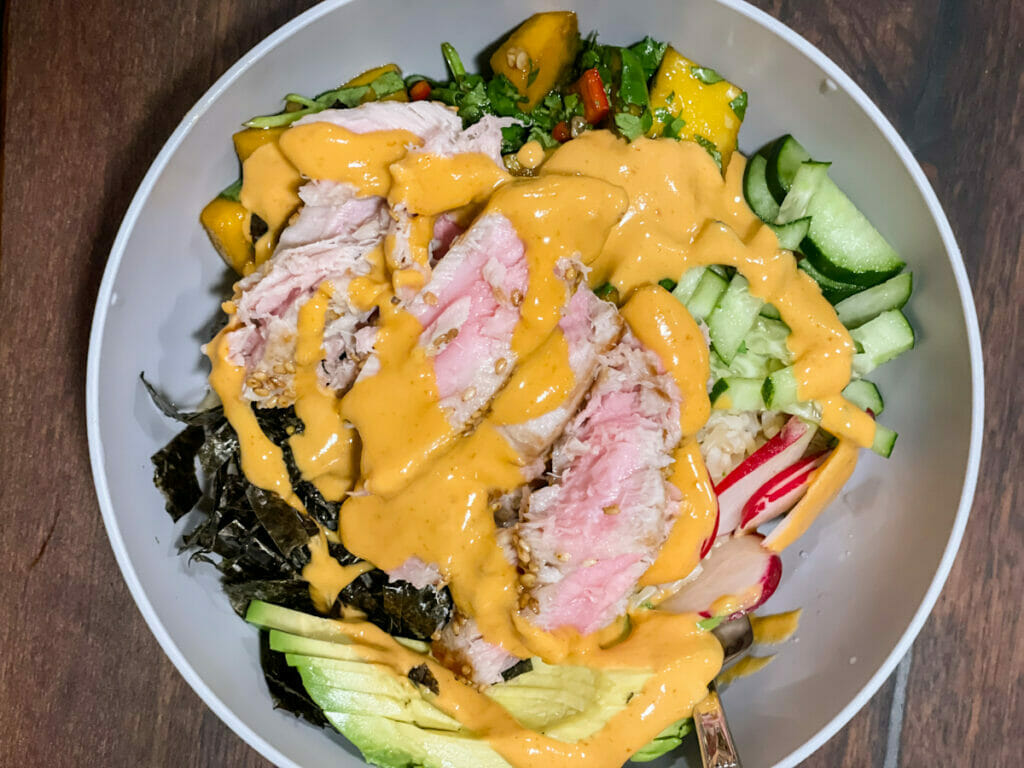 Of course, we didn’t exist on sweet alone, though I am sure I could if I had to. Chris and I both love sushi and Asian-inspired foods, so this recipe for spicy brown rice seared tuna roll bowl. It features a mango chimichurri, nori (seaweed), avocado, cucumbers, radishes, a spicy tahini sauce and is just delicious with the perfect amount of kick. Half-Baked Harvest has never steered us wrong!

Clean Self Care with Fall Flava 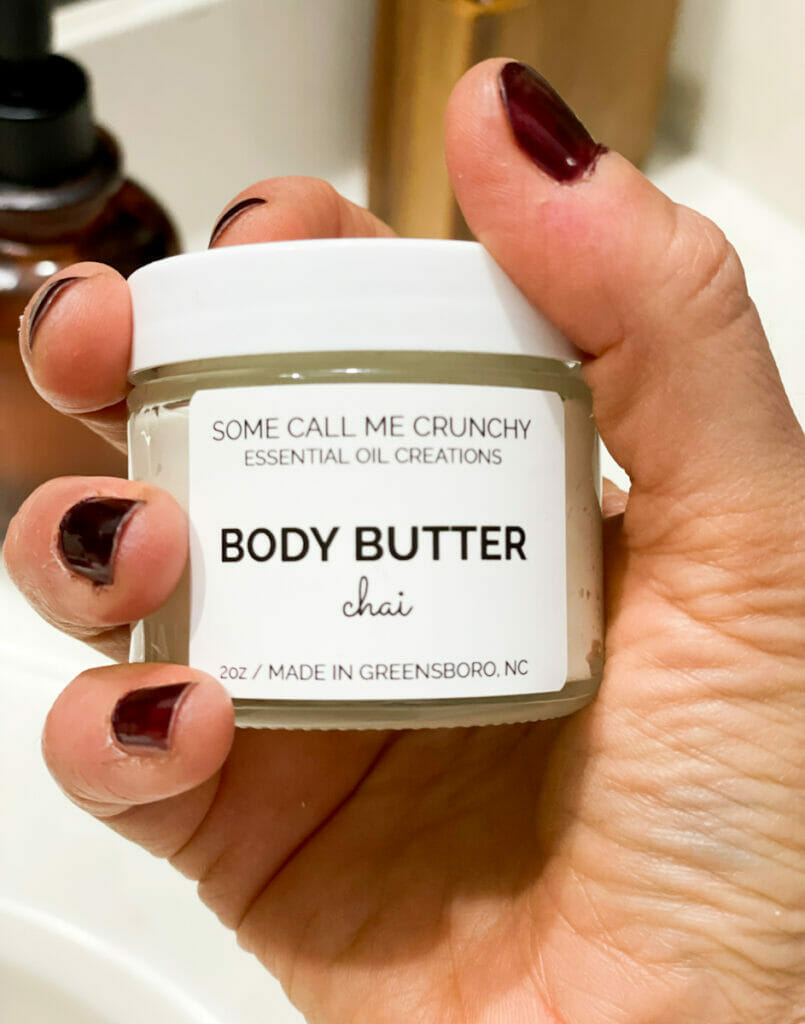 My friend Erienne, creator and owner at Some Call Me Crunchy, is releasing her fall line of self care and essential oil products this Sunday. She recently dropped off a couple of goodies for my birthday including her chai body butter and lip balm, chai tea (in collaboration with Vida Pour Tea) and pumpkin spice room spray. Oh my goodness, it all smells amazing. I am such a fan of her products because they just feel so good, they’re good for me and my home and now they’re in my favorite seasonal scents! 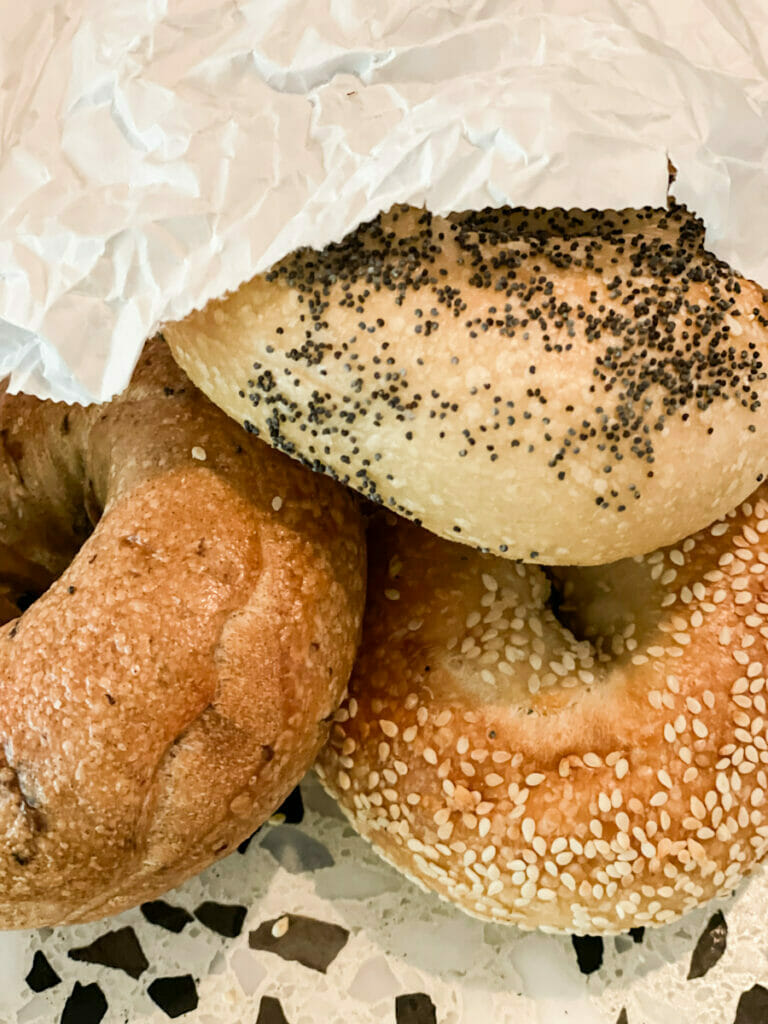 A friend of mine and I were chatting about an upcoming trip to Charlottesville she had planned. I reminisced about Bodo’s bagels, the bagel shop I remember from my brother’s days at the University of Virginia. She surprised me by stopping by on her way in with some of these carbolicious treats for us! The next morning, I had a cinnamon raisin and Chris had everything. We were in bagel heaven. I am hungry just looking at my own photo. 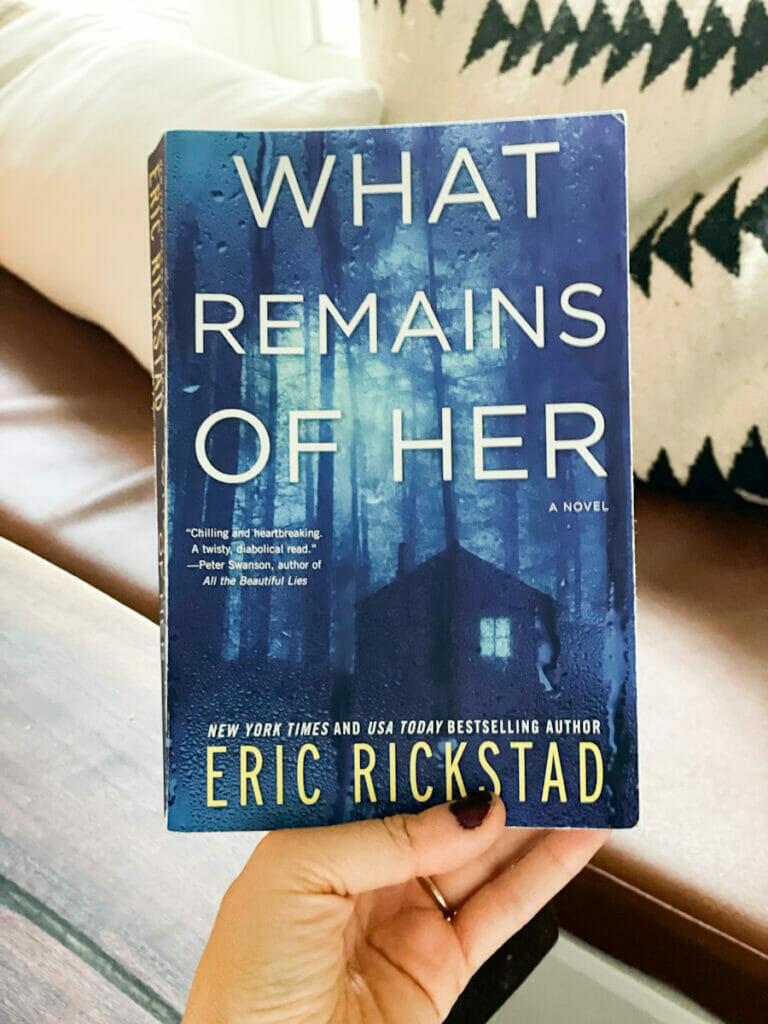 I am slowly making my way though the millions of books my mom has passed on to me. I was in the mood for a thriller after reading a couple of sweeter books lately. What Remains of Her is a creepy thriller with weird twist and turns. I will say, it’s a little longer than it needs to be, but a captivating story nonetheless and it really picked up. It’s 400 pages, and I read the last 300 in two days – if that tells you anything. The story revolves around Jonah Baum, a college professor whose wife and 6-year-old daughter go missing. Of course, he’s the prime suspect but there’s never enough evidence. Ostracized by the town, he disappears into an abandoned cabin in the woods. 25 years later, another girl, similarly aged, goes missing and turns up in the woods to be found by Jonah. She seems eerily like his daughter . . . 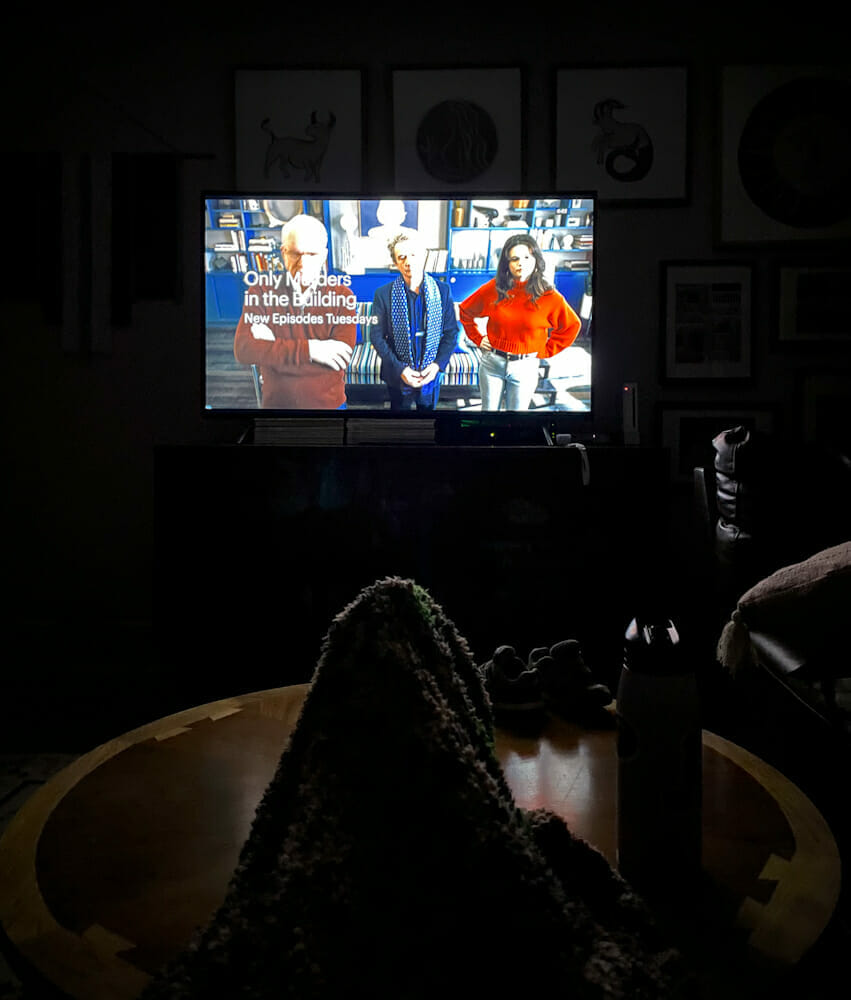 We’ve got RomComs, how about MystComs? ComMurder Shows? Emmy and I started Only Murders in the Building last week and it is SO GOOD! Martin Short and Steve Martin are, as usual, the perfect match. Selena Gomez offers a dry delivery that’s a perfect foil to their energy. There have been plenty of hilarious lines that Emmy and I have repeated, but, of course, there’s also a murder to solve. Highly recommend this one if you have Hulu. Or get Hulu because this show is worth it. Check out the trailer: 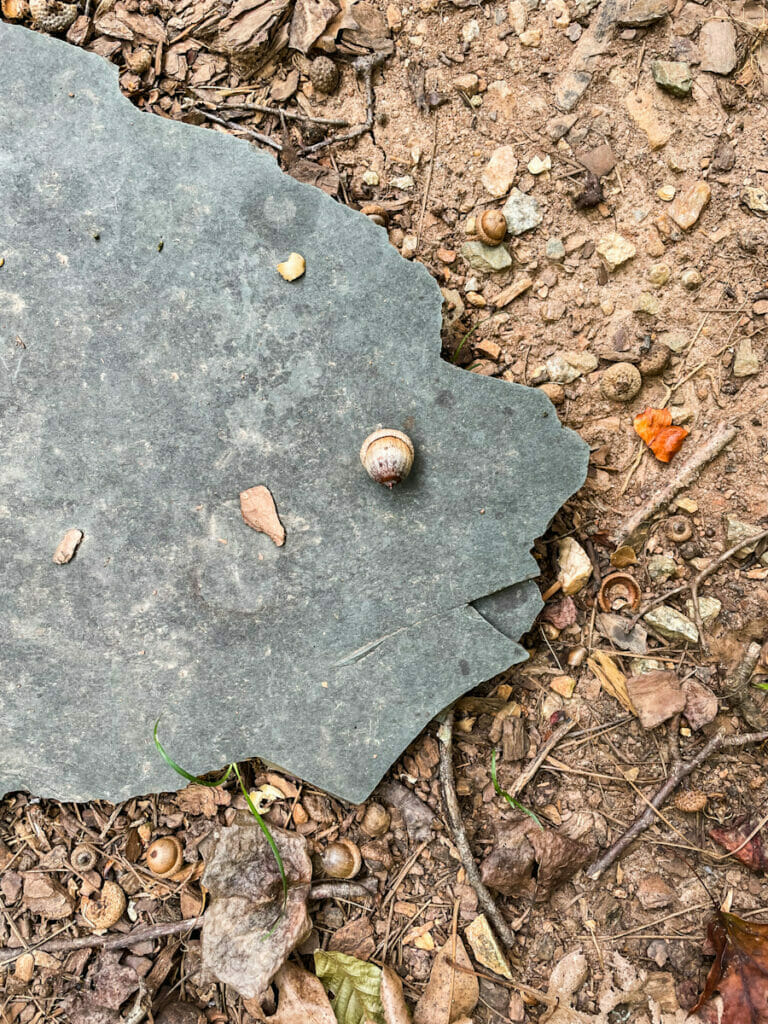 Last weekend I was working in the basement, cleaning up the dumping ground it had become. it involved several trips up and down our stone steps in the back yard. I looked down and saw this acorn that had fallen in just the right space to make a stone-faced person. Do you see it? Actually, it reminds me of Eric Carle’s face designs in his books, particularly the profile of a girl in Wilder’s favorite, The Tiny Seed. 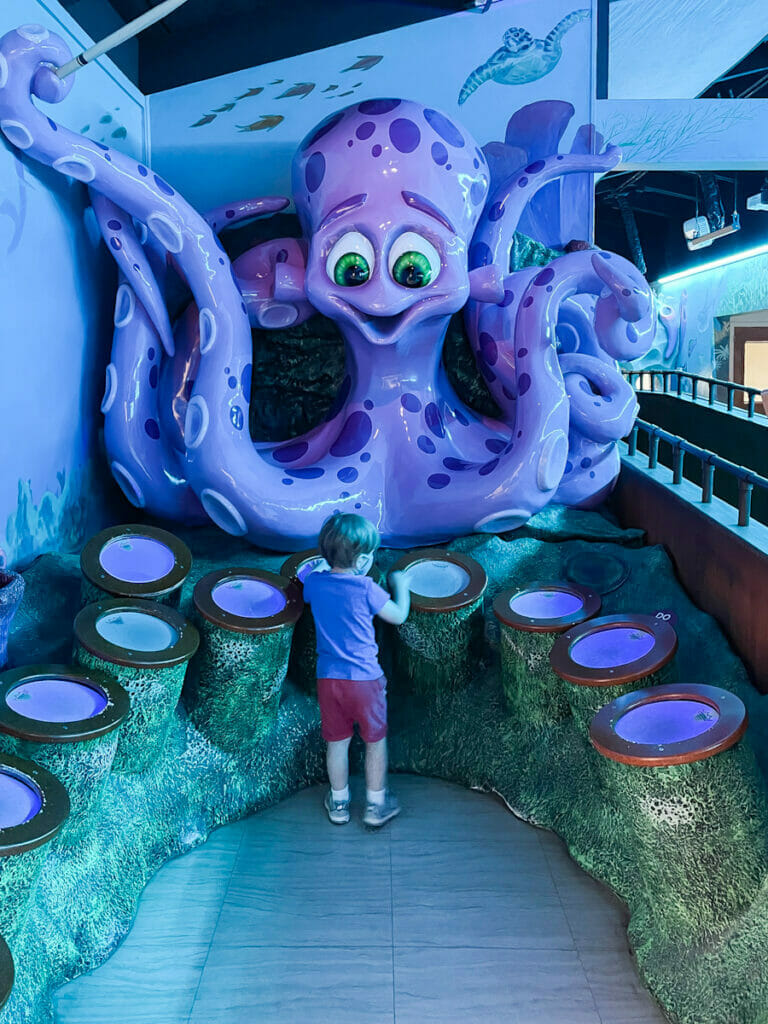 Since Wilder is only in school 9-1 each day and I often have a little work to do when he gets home, I’ve declared Fridays our Friday Fundays.  Last Friday, I picked him up from school and surprised him by taking him to the Greensboro Science Center, where I obsessively watched him like a hawk and followed him with sanitizer. He had a blast and we even ran into one of his best buds. I need to sit down and make a list of fun activities we can do that will be safe. I am open to any and all ideas – send them my way! So far, I’ve got some park outings and trail walks, seasonal crafts and cookie decorating on my list.

I hope you have an amazing weekend! Chris and I are headed out tomorrow night to celebrate 18 years of marriage. We had plans to go to a Big Head Todd concert that we’ve been looking forward to. We bought tickets in May when things were looking hopeful. But now things have gone in another direction. The venue is indoors and SRO and isn’t requiring proof of vaccination or negative tests, so we’ve decided to forfeit our tickets. It was a hard decision, but with a child at home who is too young to be vaccinated, we felt it was the right choice.  Instead, we’ve booked a spot at the open air counter of one of our fave restaurants and are making the best of it. I also ordered this game a while ago when it was on pre-order, so if it gets here in time, I think we’ll play!