You guys, I am feeling energized today!  Wilder slept for a 6 hour stretch, which is the longest we’ve been able to get out of him… Hopefully it wasn’t a one off and he will continue to do that!  Today I have a dresser to share with you guys that was one of those pieces where so much just went wrong, but in the end I am happy with the results.  I told my partner Katie that I hope it sells quickly because I never want to see it again. 😉 Sometimes you just have to keep on pushing through with those pieces that are much more challenging than anticipated because the end result will always be worth it.  Because I persevered even though I was ready to toss this into the burn pile, I am able to bring you my latest furniture makeover: glam black French triple dresser. At the bottom of this post  you can find the products I used to create this look.  (These are affiliate links) 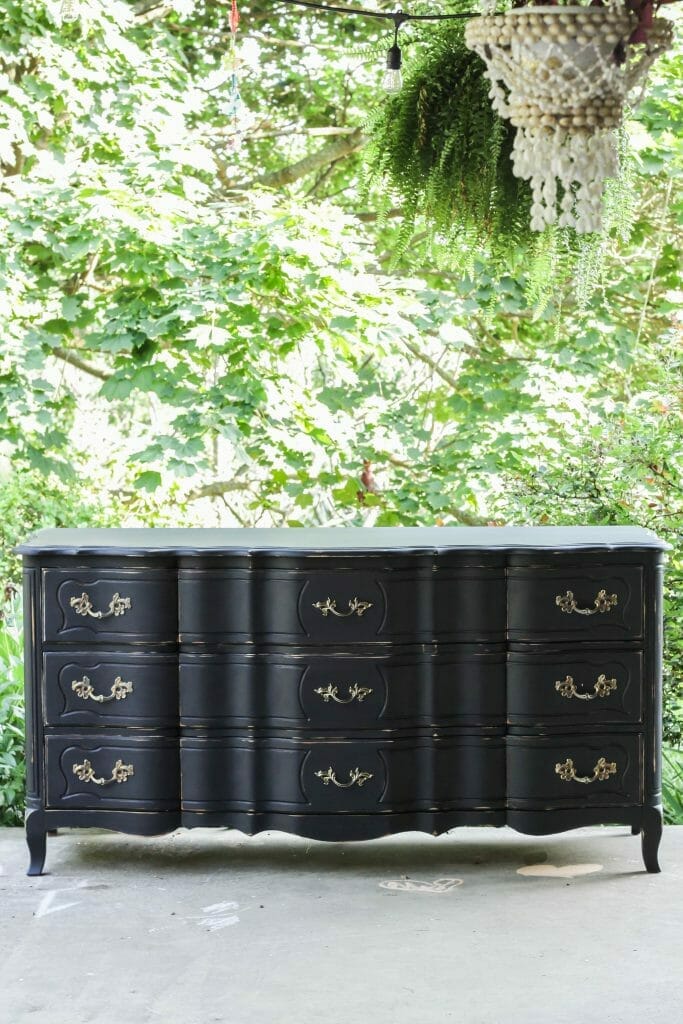 As you can see, at this stage of life with a newborn, I’ve sort of just given up on staging my furniture for photos… These were all taken at the end of the day while Emmy held Wilder, I worked quickly to snap some photos, and Chris watered the garden.  In one of the photos if you look carefully you can see the spray from the hose. 😉 Instead of focusing on staging, I am letting the dresser and the chalk art hearts speak for themselves.

This dresser was actually found my one of my best friends who texted me a photo.  Her neighbor was selling it at a yard sale and did I want her to go ahead and pay for it for me.  She sent this photo with her text: 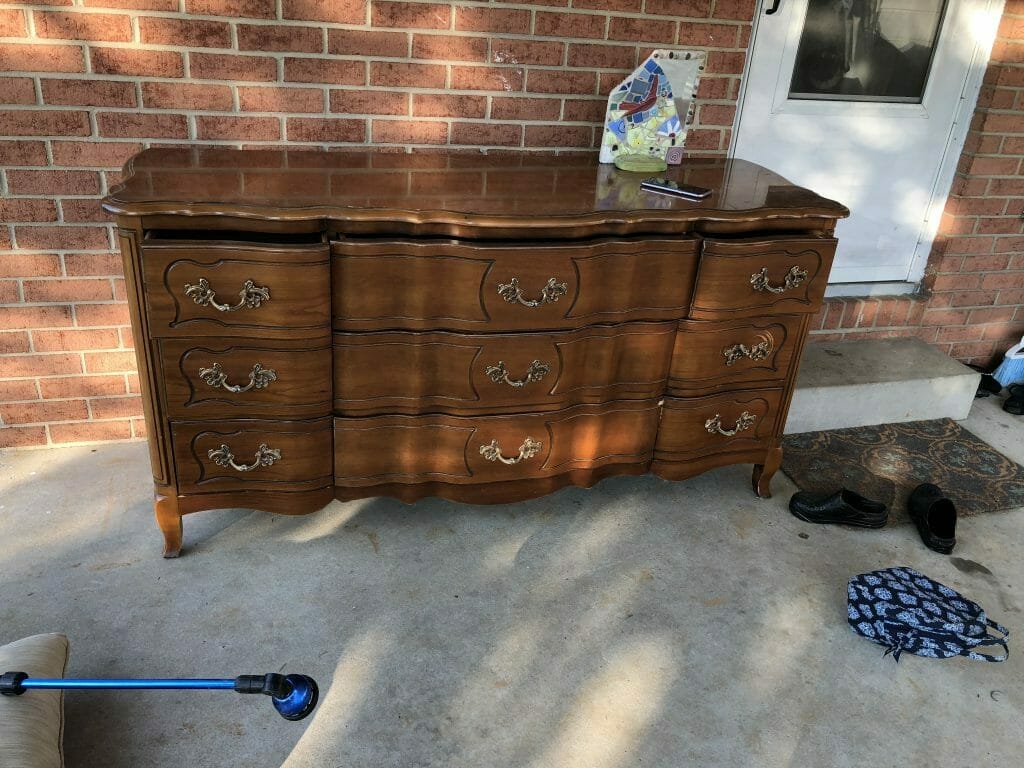 It looked to be in good shape so I said yes, of course.  Chris picked it up for me the following day and warned me that it was heavy.  He and I have lifted some furniture in our lives, and this piece is a total beast!!!  It’s solid and heavy!

Unfortunately it did have some issues that needed to be tended to.  The veneer was pulling away in several places, and one of the gorgeous handles was broken.   I knew I wouldn’t be able to repair the broken pull, so instead I ordered 9 new pulls from D. Lawless Hardware in a similar French style.  While I waited for the hardware to arrive, I got to work on gluing and clamping all of the veneer down.

Once it was sanded, I applied 3 coats of General Finishes Lamp Black paint- this is my go to black!  It’s a beautiful true black and looks good on anything.

After the paint dried, I used my orbital sander to hit and distress some of the edges, and again hand sanded the edges that were a little harder to reach with the sander.

I wiped the dust away with a damp rag and then applied General Finishes satin finishing wax with a clean rag for a smooth and durable finish.

Finally, it was time to put the new hardware on and this is where I ran into trouble… I had not measured the hole spacing and assumed they were 3″ apart.  Nope… they were 2.5″ apart.  I was going to have to drill all new holes!  On the outside drawers, I thought I could just redrill one hole and shift the pulls slightly further out.  Well, I tried that and because of the curve of the drawer, the new hardware would not sit flush and the old hole was visible.  UGH! After that happened, I decided to just leave the original pulls in place on the outside drawers, and use the new ones down the middle.  Mixing and matching always works as long as they coordinate.  Well, I had to drill new holes just outside the old holes, so several times the drill slipped into the old hole… it was all so frustrating!  I stuck with it though as this was the best solution.  Be glad I didn’t make a video tutorial because it would have been full of cuss words.

In the end, I really like the mid of old and new hardware and think they complement each other well and give it a bit more of a boho French vibe.  Below you can see the hardware side by side. 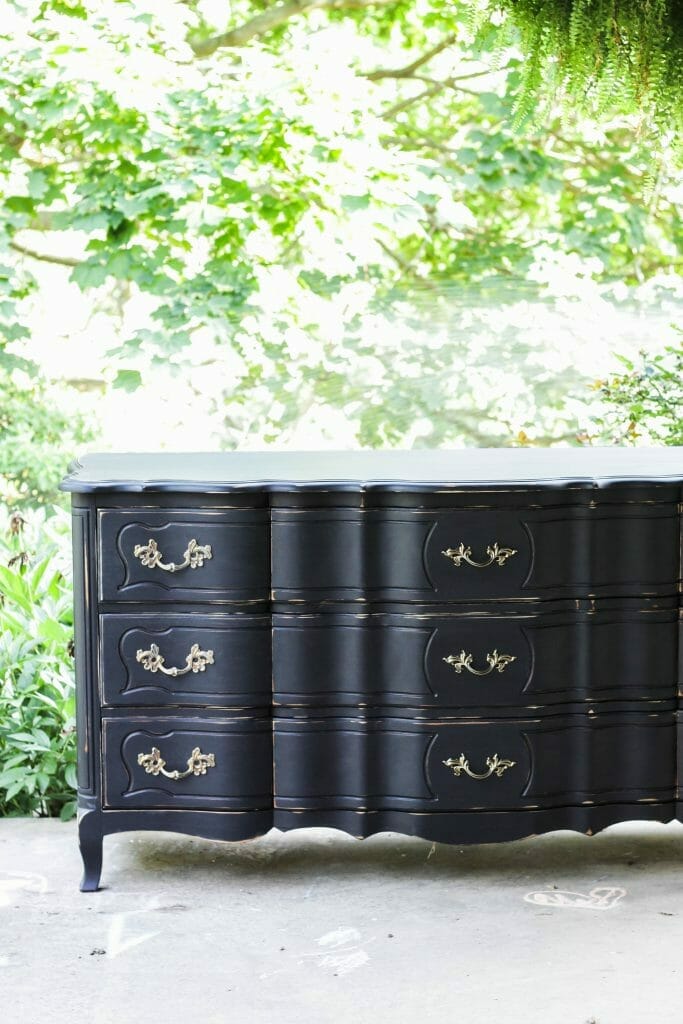 I am so glad that D. Lawless hardware had something in a similar style that would work for this dresser.  The new pulls are just beautiful.  Also, close up all those little specs you see are little pieces of sawdust from so much drilling!  I cleaned it off, but there was bound to be some remaining. 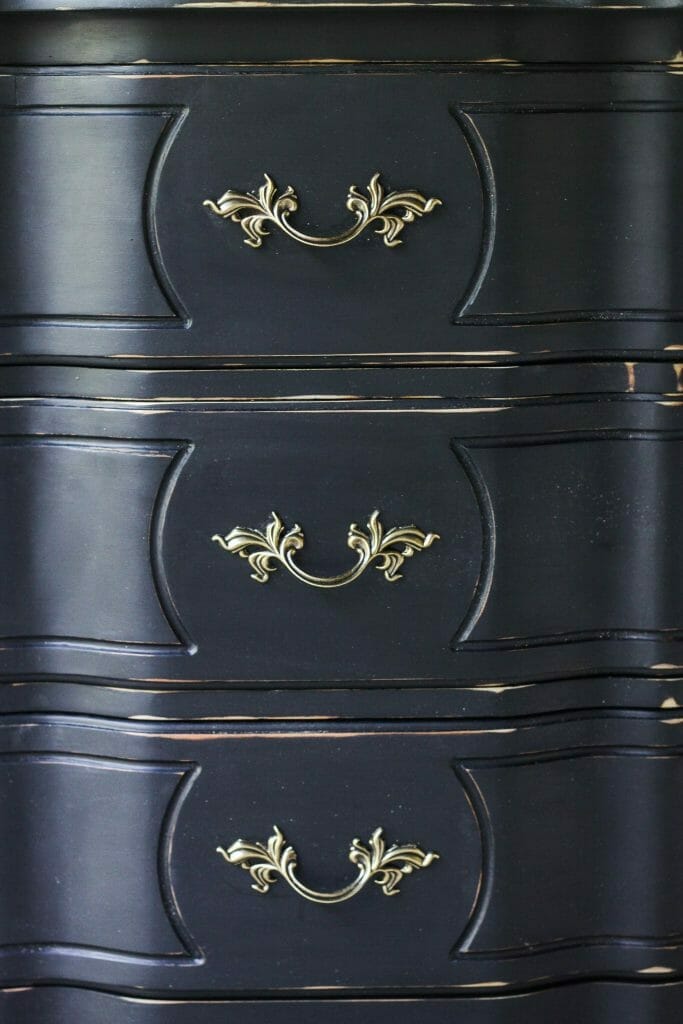 The old hardware has a bit more detail but they mix nicely on this piece. 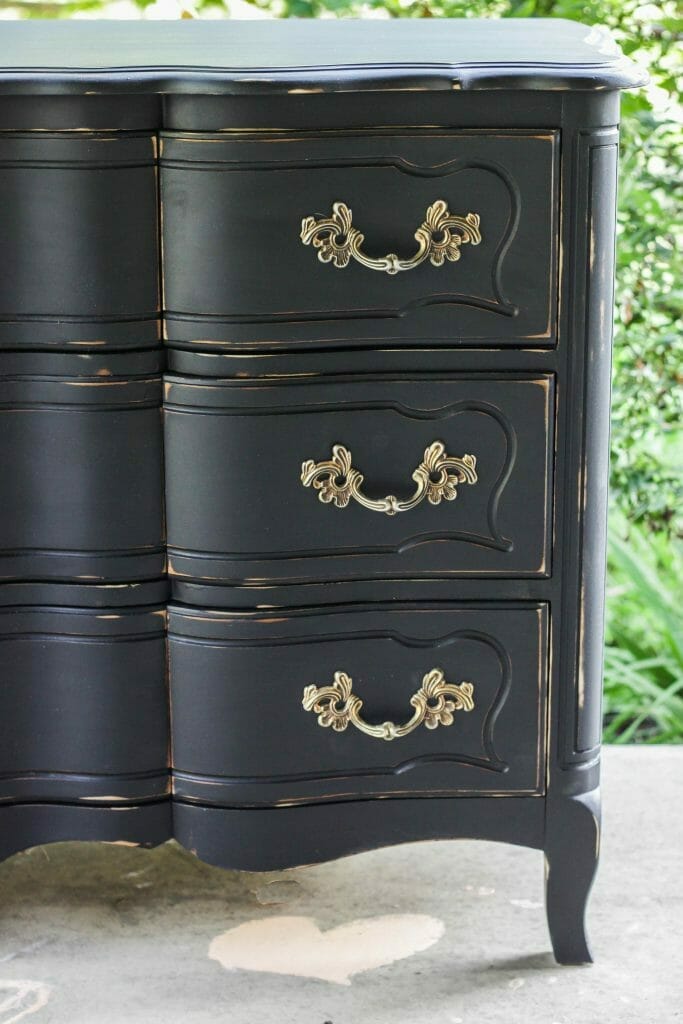 This dresser truly was a test of my patience, but it really did turn out better than I anticipated. 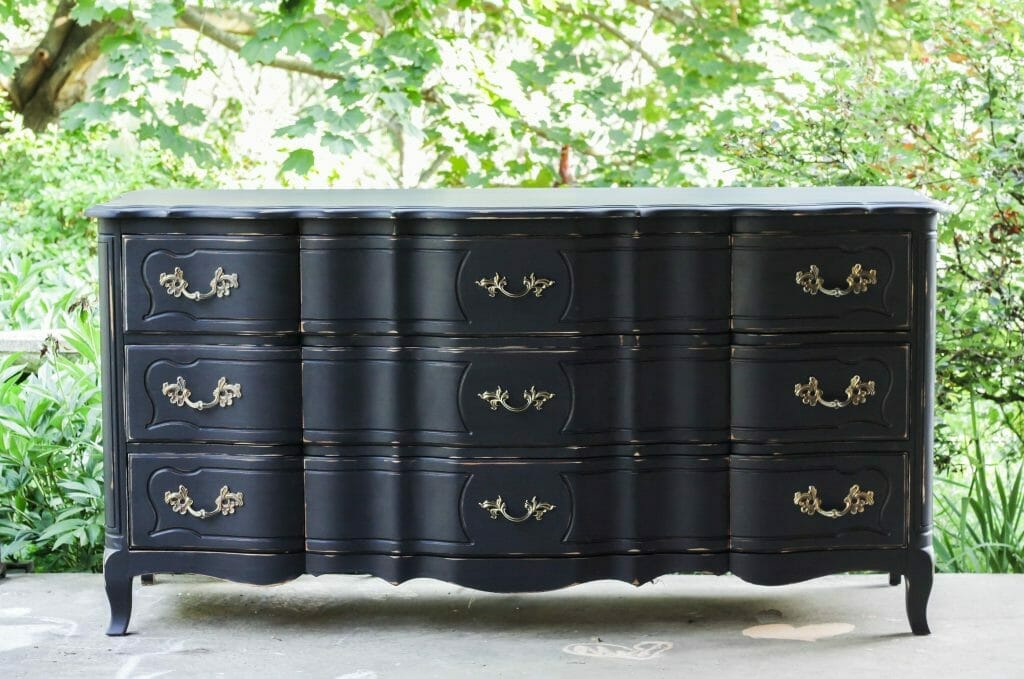 This piece is headed to Sweet Clover for our next sale coming up July 20-22.  Chris and I will be hauling it over there soon, and  hopefully that will be the last time I have to move this beast! 😉

Now the real question, did you spot the hose spray?

If you’re interested in creating this look, here are some of the products used: