As I mentioned yesterday, we spent this past weekend celebrating Wilder’s first birthday at a small party with our family.  He had such a wonderful time with everyone, and continues to have a fabulous time playing with all of the new things he now has to play with.  I shared some photos of him playing with his new toys on facebook and some friends wanted to know where we found some of these unique gifts, so I thought I would share them with all of you to give you some gift ideas for one year olds.  (This post contains affiliate links). 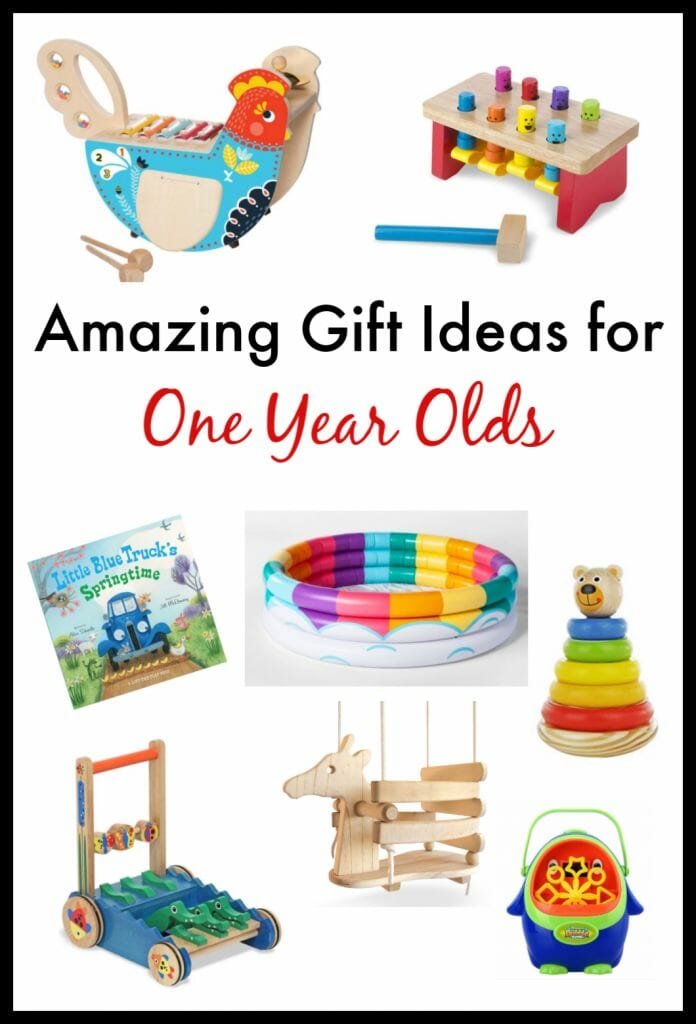 I don’t know about you, but I actually find babies hard to shop for… adorable clothing is always fun, but what will the soon to be toddler actually like?  Often the items I thought of as gifts were not yet age appropriate and I was left stumped!  As I planned for Wilder’s first birthday, I tried to think of things that would definitely be useful, I knew he’d enjoy based on his interests so far, would get us outside to play, and would not drive me crazy. 😉 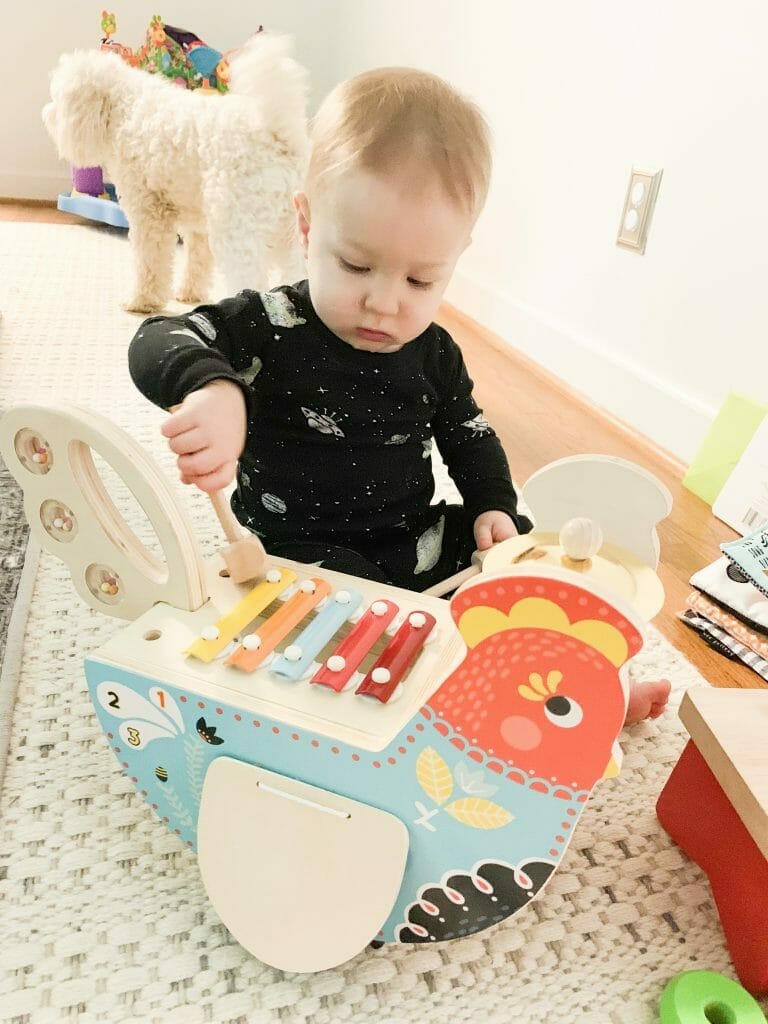 Wilder is really into anything that makes noise and loves playing with the rattles at storytime as well as the hand me down xylophone he has.  Our family is really into backyard chickens (we’re planning to get them again one say soon!), so when I spied this musical chicken on Amazon complete with a cymbal, xylophone, clackers, and a rattle, I knew it was just perfect for him.  Not to mention, it’s totally colorful and adorable! Naturally, this was a gift that Chris and I gave him.

Another colorful and wooden toy he received from his cousins is the Melissa & Doug pounding bench.  As I mentioned, he loves to make noise, so this toy was perfect for him.  His cousin Laine has it and loves it so much that her mom purchased it for Wilder.  The best part is that the “nails” stay in the bench, so the only part it has is the mallet.  Great news for us, since toy parts are easily misplaced by Wilder who likes to drag them from room to room.  Wooden stacking toys are also a fabulous no batteries required option.  Wilder has a couple of them now and loves to play with those, and is just starting to try to stack the rings, so one seems to be the perfect age for that.  He has the bear shown above as well as the Melissa & Doug classic version. 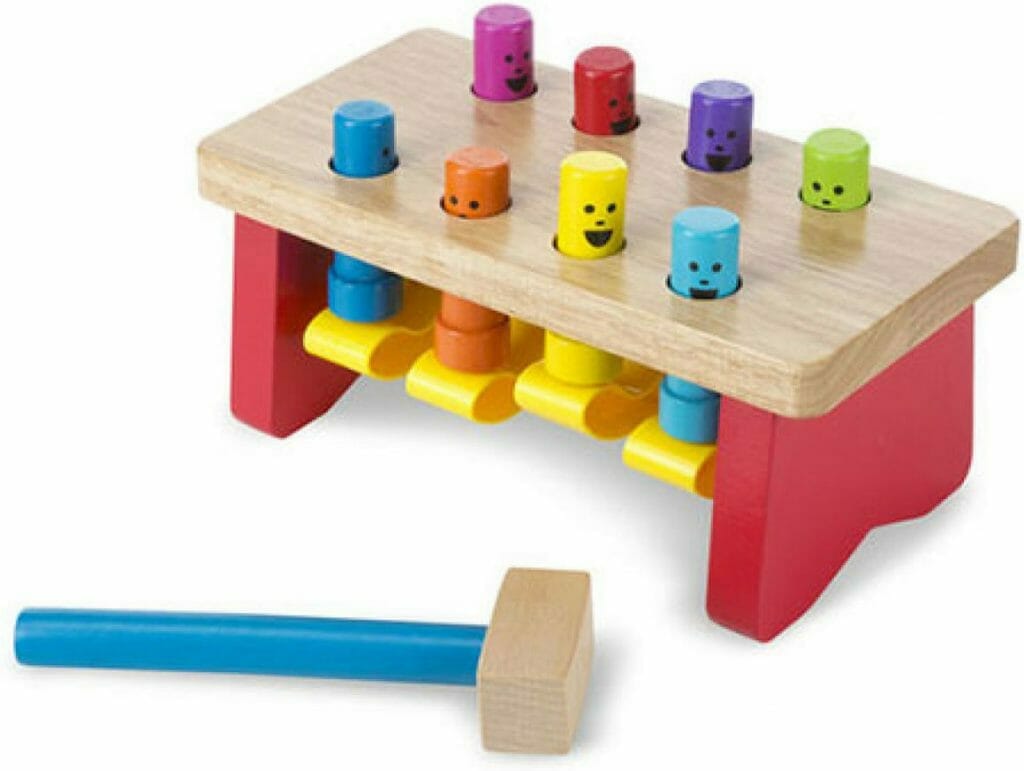 Wilder is not yet walking, and my in-laws sent him this adorable Chomp & Clack alligator walker, which by name sounds like it would be the noisiest toy ever!  On the contrary, it’s very quiet, and Wilder enjoys pushing it around.  Maybe it will help him walk, but to be honest, I am not rushing that. 😉  Chasing around a walking baby is harder than chasing a crawler! 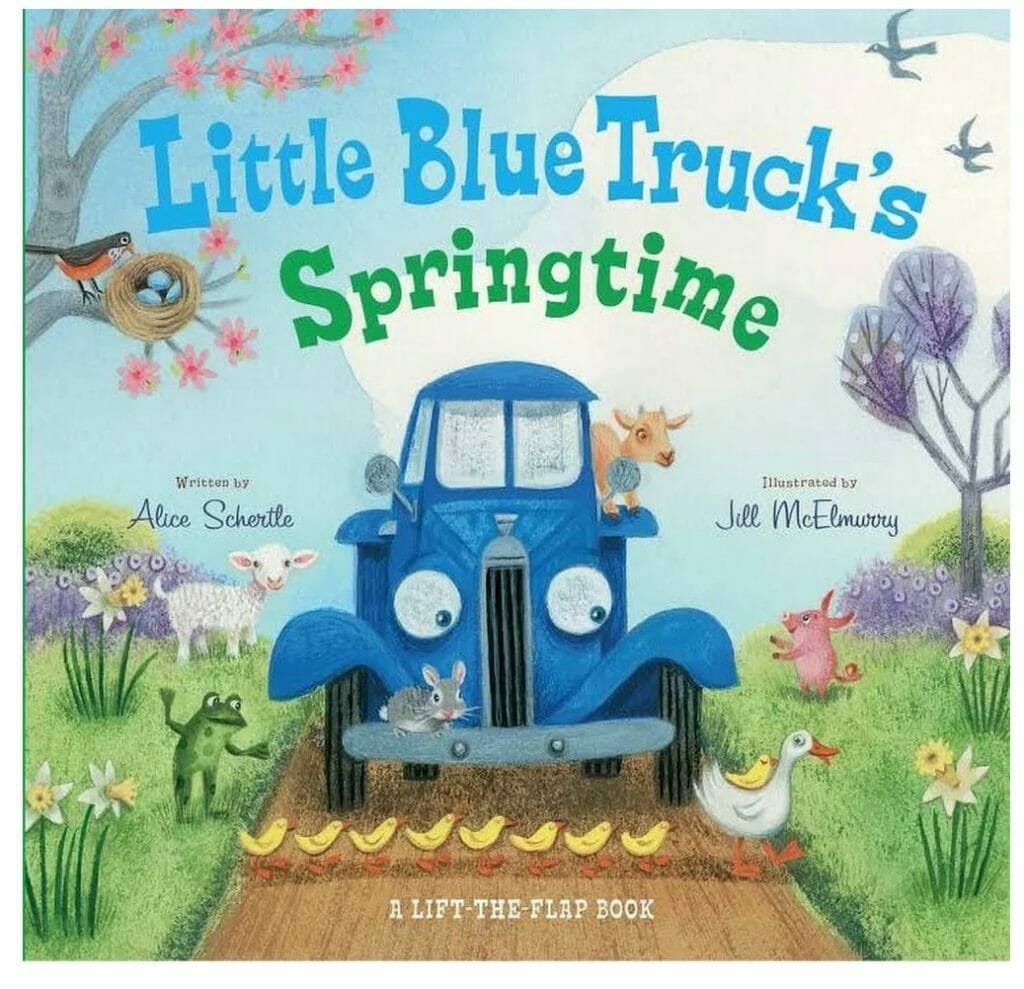 Board books and soft books are always a win for one year olds in my opinion.  Wilder absolutely loves to look at books and loves to be read to. He especially loves interactive books, and  has worn out his “Where’s Spot?” lift the flap book. My parents had given him that earlier this year, and I told my mom how much he adored lifting the flaps.  She came through for his birthday with a new lift the flap book, and it happened to be from one of his favorite book lines, Little Blue Truck. Little Blue Truck’s Springtime is already on its way to being a well loved book in our home.  Sawyer also gave Wilder a really sweet soft expandable book, Tip Toe Tiger, Wilder can easily hold and open himself.

We are finally into outdoor season here, and I am a huge fan of getting my kids outside.  I think fresh air is good for the soul and calms the nerves, at least it does for me.  Our family absolutely loves to play Kubb in our front yard, and up until now we’ve just brought the old exersaucer outside with us so that Wilder could hang out as we play.  By the way, if you have not yet played Kubb, it’s seriously fun for all ages and all fitness levels!  We love it! Anyhow, our front yard has a big magnolia tree just perfect for a baby swing.  Since it sits in our front yard, I wanted something that would have curb appeal as well and recalled the adorable unicorn swing my pal Brittany purchased for her daughter last year.  I found a wooden giraffe swing by the same brand, and was so excited to give it to Wilder.  He was pretty excited to receive it as well. 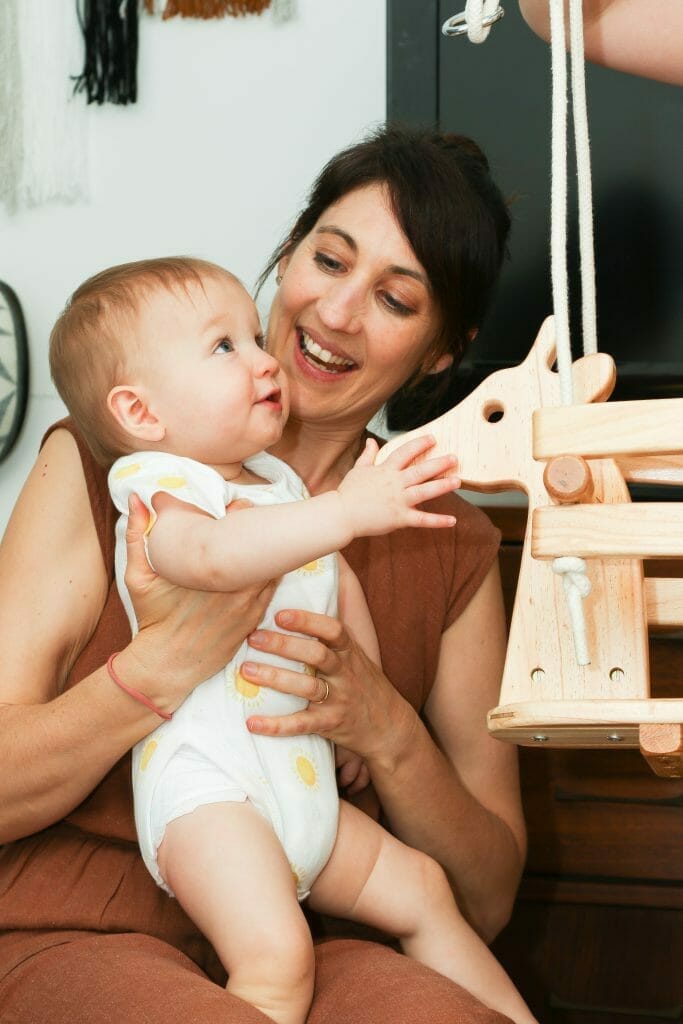 We hung it in our Magnolia Sunday morning and he loves it!  There was excess of rope so we knotted it and use that to pull instead of pushing the swing, which is really convenient.  As you can see, he truly enjoys riding in it. 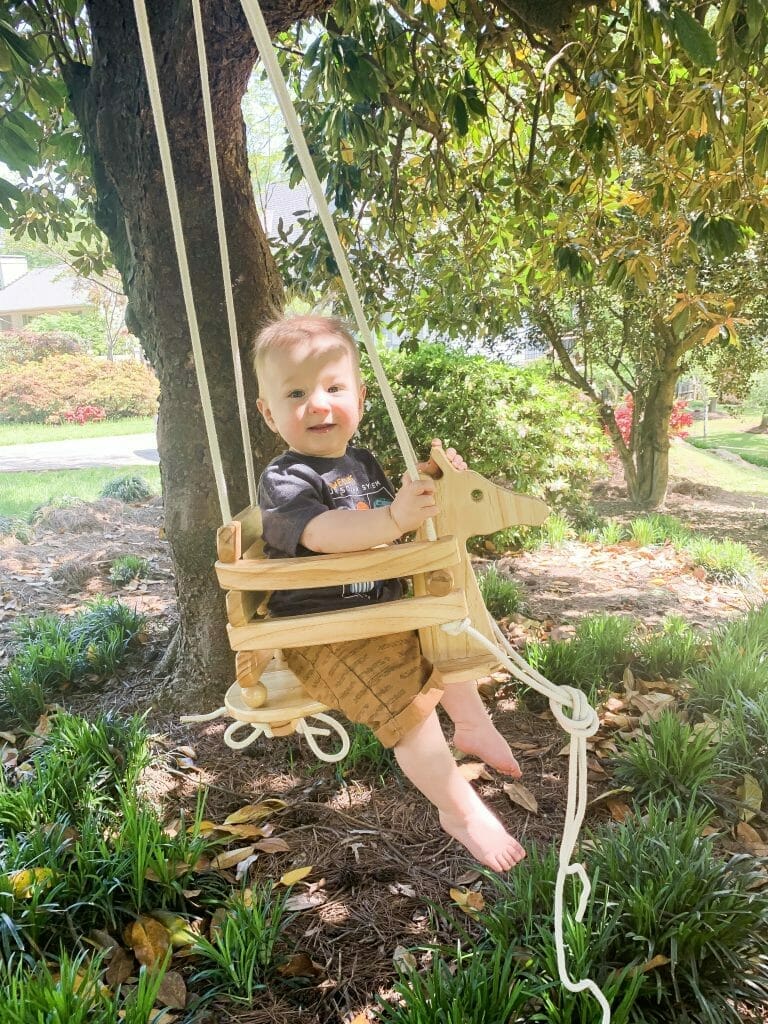 He also received an adorable rainbow inflatable pool.  It’s supposed to be 88 here today, so we plan to inflate it and watch him go to town.  Emmy is pretty excited about playing in it with him.  Doesn’t it look like so much fun though? 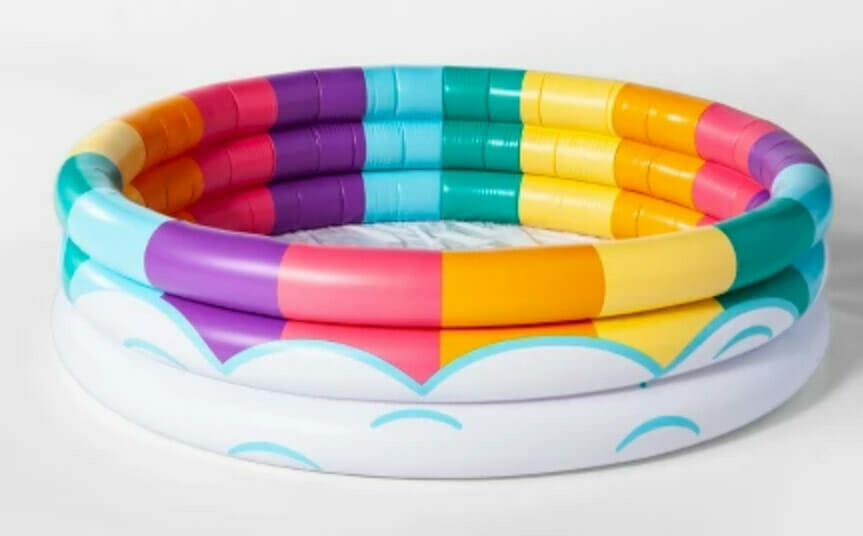 Wilder is at the age where he really loves when we blow bubbles for him to pop.  He’s just discovered that he can pop them.  My brother’s family sent Wilder this adorable penguin bubbler which allows me the freedom to just turn it on and watch Wilder enjoy the bubbles rather than being the blower.  We tried it out Sunday morning and he really enjoyed it. 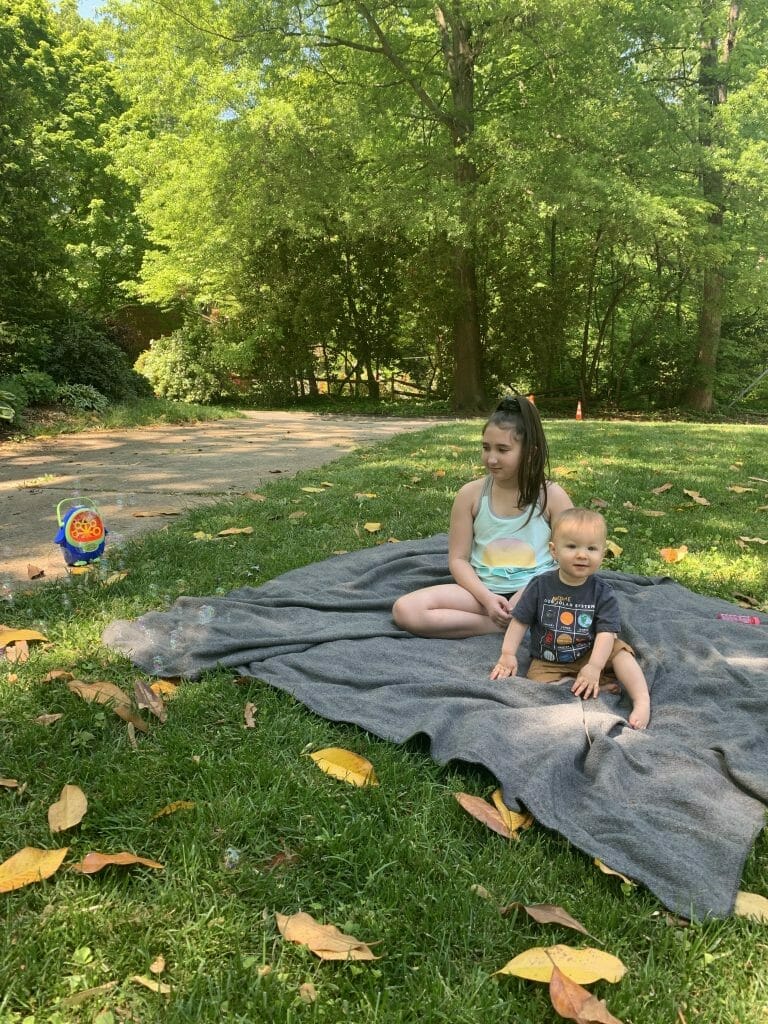 Lastly, one item I wanted to mention that I forgot to put in my graphic is a growth chart! At one, babies are generally able to stand up on their own, or (as in Wilder’s case) really close to that step.  Emmy found this constellation growth chart at Target, and we thought it was the perfect time to get started tracking his growth.  The black and white and style of this one really suits his room, too.

These were some of the fabulous gifts that Wilder received that I wanted to share with you because they make amazing gifts for the one year old in your life! 🙂  I would love to hear what other ideas you have since I am always on the lookout for fun things for our baby boy.