I didn’t actually plan a post for today, but some things just make me smile and are worth sharing.  The kids are off to school on this “feels like -2” morning, and I am sipping my coffee, and was snickering to myself about a post I read a couple of years ago, called “The 2014 Hater’s Guide to the Williams-Sonoma Catalogue” and thought, “everyone needs to read this!”  So then I googled to find this year’s guide, and again, was rolling and trying not to pee my pants. So I was inspired to share with you some holiday laughs as well as a couple of elf ideas I’ve used this year.

Before I delve into this first link, I should tell you that MANY MANY moons ago, I worked as a manager for Williams-Sonoma.  I was a fresh-faced 23 year old, and let me tell you the women who worked there (who were all closer to my current age and up!) were not fond of having a 23 year old manager…. I jumped at the chance to leave the company for J. Crew a year later.  I absolutely loved my discount, but I did not love the job.  That being said, I still love the products they sell and don’t hate the company… but I always love a good satire and sarcasm, so I bring you The 2016 Hater’s Guide to the Williams Sonoma Catalogue .  It does not disappoint!  Here’s a little example…. 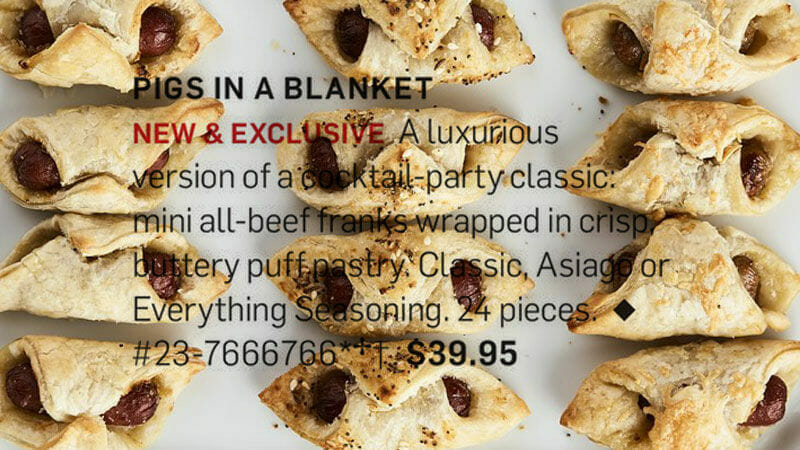 “Copy: ‘A luxurious version of a cocktail party classic.’

Drew says: As always, there is nothing rich people love more than eating fancy versions of white trash food. ‘It’s franks and beans, but the beans are imported from Tuscany and the franks are actually made from Japanese HegWu beef. Such whimsy! NINETY DOLLARS PER PIECE.’ Every time a Brooklyn resident raves about ‘comfort food,’ a coal miner from Appalachia is crushed in a landslide.”

Be prepared for harsh language but a hearty laugh.

Next up, I wanted to show you some of our fun elf shenanigans this year.  I’ve had some fun with our elf in the past (and here),  but I have to admit that this year I’ve not been as creative. My kids are up later so usually I have to move him in the morning when I get up (I’m awake before everyone else).  That last hour of their sleep is their most restless, so I haven’t put him in their bedrooms and they keep wondering why he hasn’t visited each of them yet.  I tell them he can’t get in because their rooms are too messy. 😉  Anyhow, I did manage to set up this little flirtations snowball fight scene between Lolly, our elf, and barbie. I used white clay to make the snowballs. 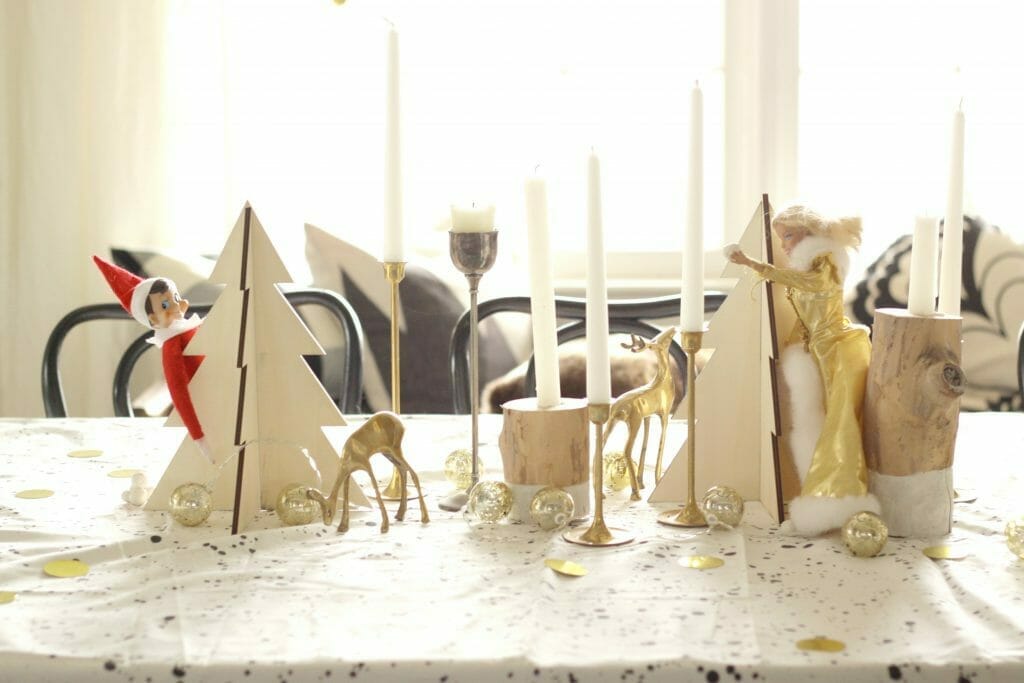 Barbie is such a saucy minx… I mean just look at her, frolicking in her gold Christmas gown.  Emmy saw this and said, “Lolly must really like Barbie, because every year he comes back he has to see her.” 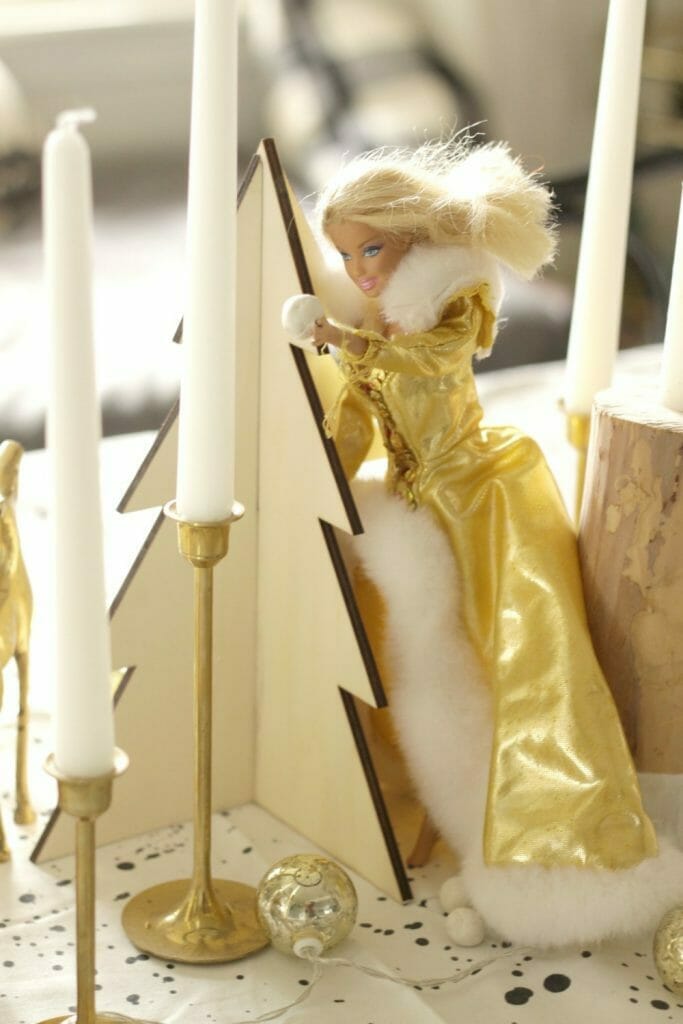 Secondly, I got these awesome “elf ties” from Petite Peanut Boutique (affiliate link). I put one on the elf and one on my vintage Santa, and set up a little business pow-ow over drinks.  Lolly’s got his arm around Santa, like “Buck up, big guy!  You can do this!”  Sometimes even the man in red needs a pep talk. 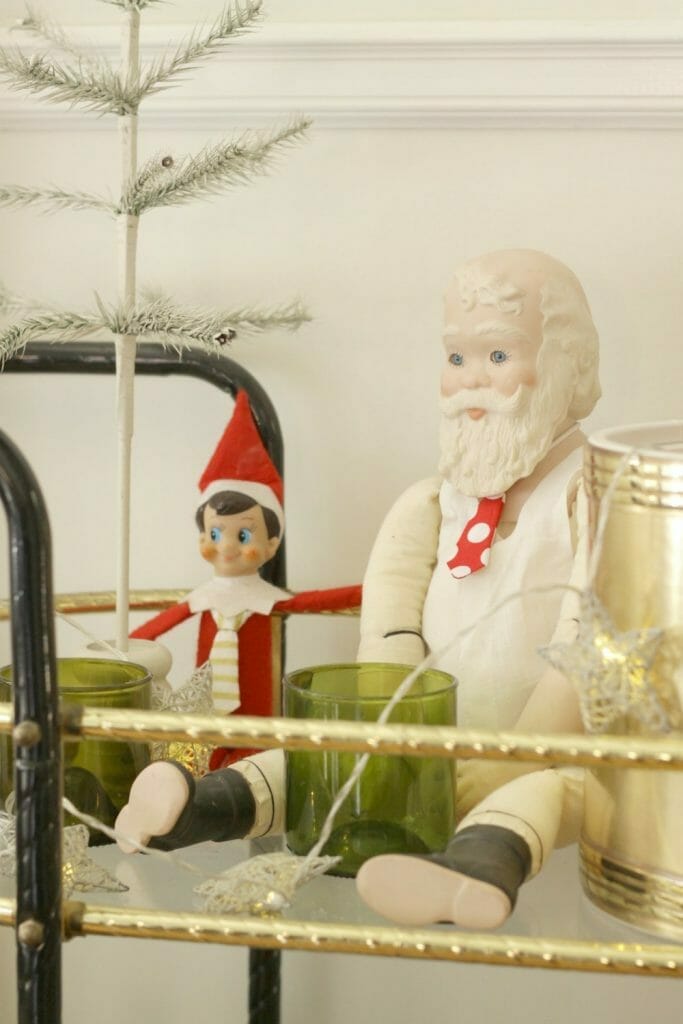 Well, that’s all for today!  I really just wanted to pop in and make you laugh or smile.  Now it’s off to costco to prepare for holiday bakefest 2016!  Cheers to the weekend!