Hello friends!  I have a post today that I have been meaning to write for some time about how I made loads of money while selling tons of my stuff before we moved.  Of course, I didn’t have the time to put this together earlier, but I figured now that everyone is out there using Marie Kondo’s method, the moment could not be better.  Before we even listed our last house to sell, I went through and majorly decluttered our home, cleaned out closets, went through clothes and toys and decor, and even eliminated unnecessary pieces of furniture.  I knew I wanted the house to appear as spacious as possible, and I wanted it to be somewhat of a blank slate so that potential buyers could picture themselves living there.  Then again, once we knew what house we were moving into and what it lacked in storage, I had to go through a secondary purge.  We couldn’t move anything to this house that we knew was not going to fit.  As you know, I am a stay at home mom, and our budget is tight.  While we needed to clean out, I saw it as an opportunity to make some money to put away for things we would need for the new house, moving costs, wine, etc. 😉 I went out on a limb and tried a method I actually had not seen before, and it worked better than I ever expected and took the most minimal amount of effort (easier than a yard sale, easier than craigslist and facebook marketplace, and definitely easier than ebay!)  I’ve had a couple of friends since approach me and tell me they’re doing the same thing, and then again contact me to let me know what a huge success it was!  Today I am going to pass that idea on to you and teach you how to make money while you Kon Mari. (If you’re here for the pretty pictures, sorry to say there won’t be many photos in today’s post… it’s much more informative, and sharing photos of what my messy garage looked like would be mortifying. Actually, I don’t have any anyhow!) 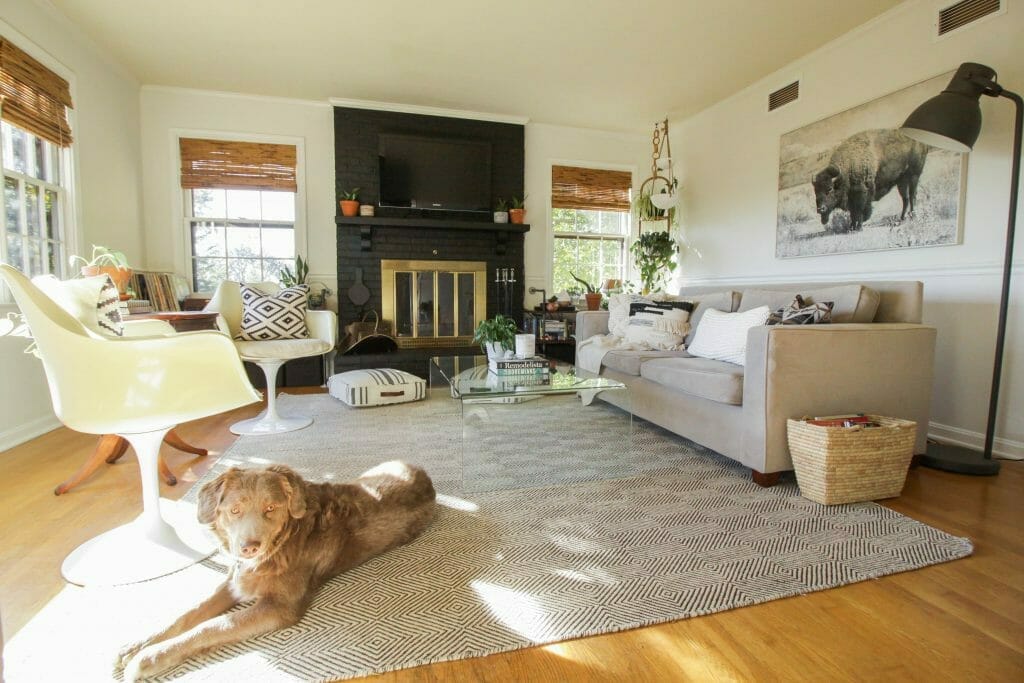 I can’t leave you with only terrible photos today, so there is my old living room, all decluttered and staged for listing!

Now let’s get back to teaching you how you can make some extra cash.  I should tell you before you read on, you will need to be an active facebook member for this method to work. I have been on facebook for quite some time, and have used facebook marketplace regularly since its inception.  However, often times people don’t show up, or you receive a million, “Is this available” messages that you reply yes to, and never hear from the sender again. It’s ridiculously frustrating!  When I started my purge process, I started posting there and clicked on the “Post to profile” option as well, meaning all of my facebook friends would see what I was selling as well.  Once they saw what I was selling, they started saying things like, “Why didn’t you text me first!  I wish I had known you were going to sell that!”  And when a friend did respond about buying something, the communication was simple; they didn’t leave me hanging, and they showed up when they were supposed to BECAUSE THEY WERE MY REAL FRIENDS!

The response I received from my friends gave me an idea. Instead of posting to facebook marketplace, where I risked all of the frustration that can come with it, I decided to start a photo album of my own on my profile and titled it “Cassie’s Facebook Sale.”  I added several photos of items I was selling and each photo had a description featuring the price, description, dimensions if needed.  In the album description, I wrote, “Clearing more out… thought it might be easier than fb marketplace just to make an album here. Comment sold if you want it and must pick up… no delivery or shipping. Also I apologize if you see s gift you may have given me in the past but Marie Kondo made me do it. I appreciated it but I can’t keep it all! Moving to a house with limited storage. Working on getting it all priced but it is all OBO.” 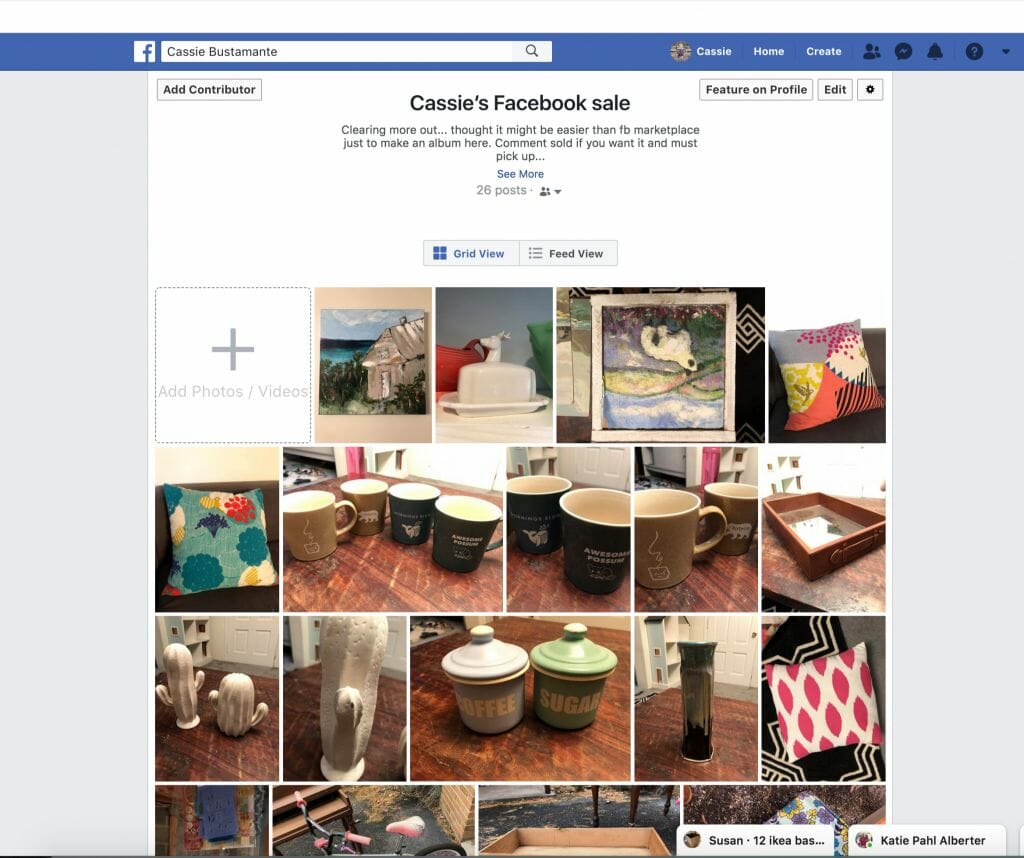 As you can see, I didn’t even have to worry about photo quality and just snapped pics with my phone.  You guys, I can’t even begin to tell you how much fun it was to see who wanted what, some friends arguing (in a fun way) over items, etc.  The comments kept rolling in which kept my photos at the top of the feed in the facebook algorithm.  My friends scheduled pickups, and everyone came to my house to get things which made life so easy for me as we were busy packing, and had a baby to tend to.  Plus, I could be in my pajamas or sloppy clothes and not really care too much if they showed up. 😉 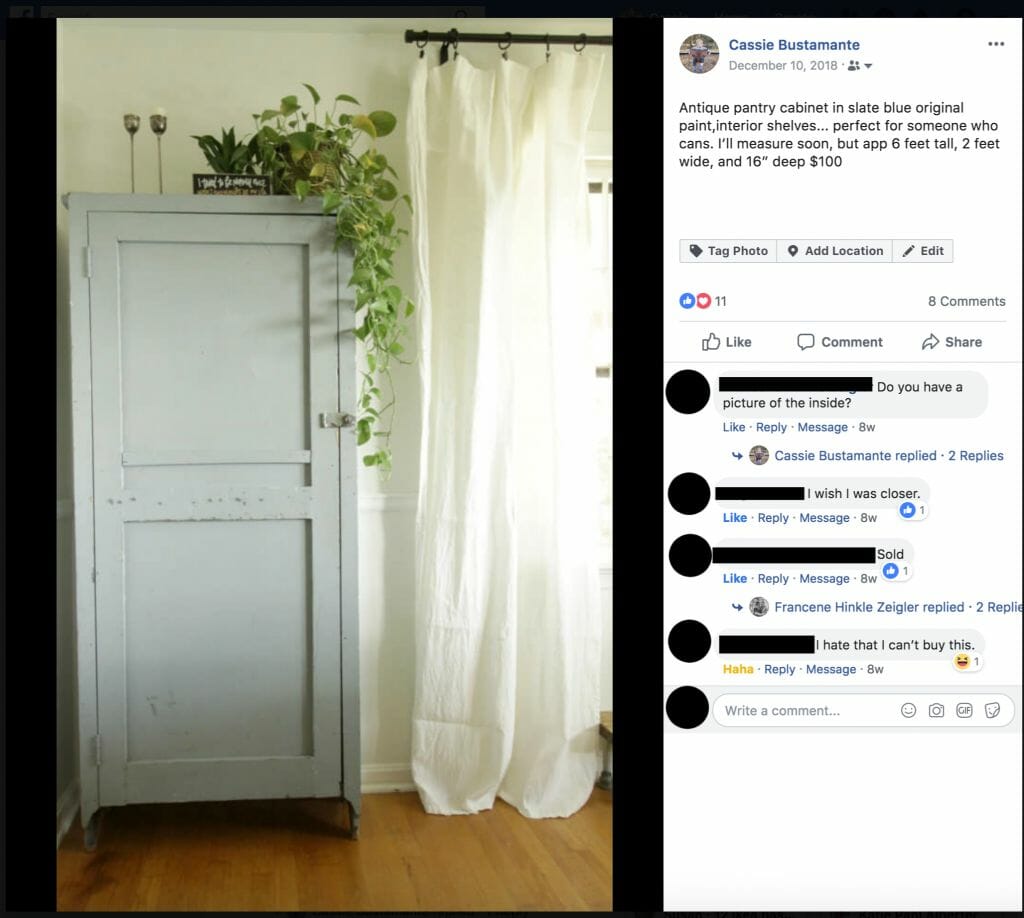 To keep the momentum going, I added items to my album in phases.  The album was quite large when I first posted it, which got everyone looking.  As I continued to purge, I found more things that I felt were worth selling.  I would add a few items at a time, which kept the album popping back up in my friends’ feeds and helped it get new attention.  Because of that album, I was able to sell so many things and made about 6 times as much as I had made at a large yard sale I had the summer before.  That yard sale was an absolute beast to throw, but the facebook album was a cinch to put together.  Unless I participate in a community yard sale one day, I can safely say that I’ll use my method of selling from now on. (Of course, I need to make some Greensboro friends first! ha!) In addition to the ease and success of everything, pieces that I had loved over the years but couldn’t keep were now going to the homes of my friends, which honestly made it easier to part with them. I enjoyed seeing how excited my friends were to take home things that had been mine, and I love knowing that they’ll think of me when they look at them.  It’s a great way to still remain sentimental about items and let go at the same time. For instance, the cabinet shown above went to my neighbor and she was so excited to use it for her canned goods, which is what I had used it for.  I loved seeing how happy she was about getting it.

Anyhow, that’s all there is to it.  Stupidly simple, am I right, guys? I wanted to pass this idea on to you because I know that so many of us are cleaning and purging right now, and it’s worth trying to maybe make some money off of all your cool stuff! Good luck, and feel free to email me with any questions! 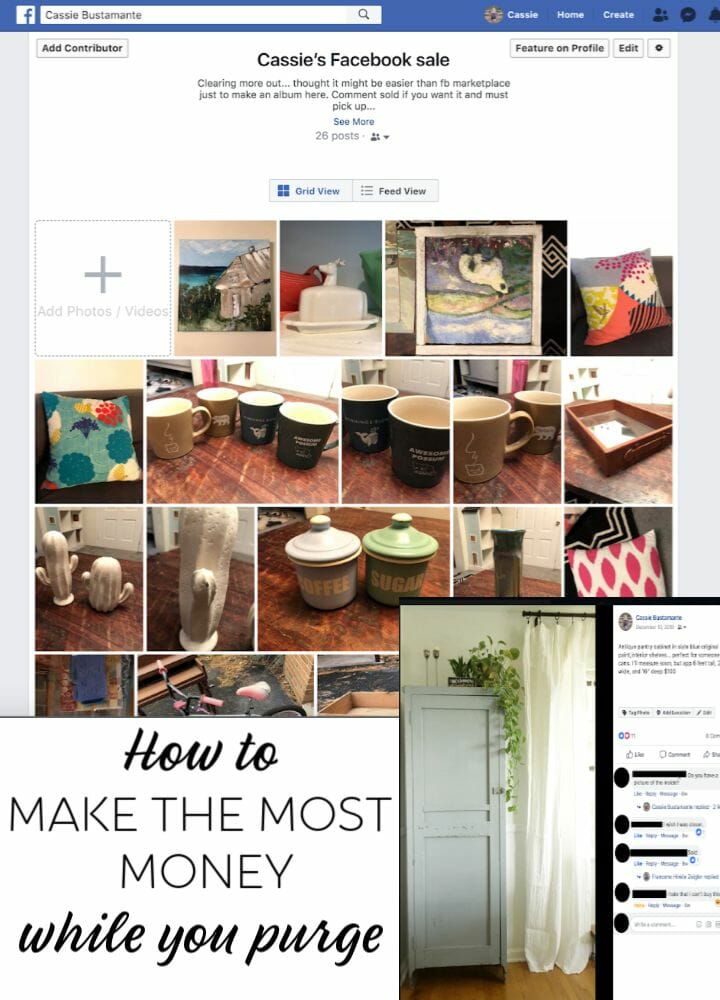