This past weekend I got my hands dirty (gilded, really) with a little DIY project that didn’t involved painting walls.  As you know, we’ve been making progress painting walls in the house, and have painted our master bedroom and bathroom.  The weekend that we painted our master bathroom, we also tackled the hall bathroom, which is the one that Emmy and Wilder use.  It’s a small space, but is just perfect for the two of them.  However, one thing it was lacking was a place to store extra toilet paper, some of Emmy’s bath items (girl loves her soaks), and a way for her to express her style a bit.  Shelves!  It needed shelves!  I searched everywhere for inexpensive brackets and shelves, and came so close to pulling the trigger more than once.  However, I knew that I already had 4 stainless steel Ikea Ekby brackets on hand, in my possession.  Unfortunately, stainless steel is just not my thing, and I gravitate toward black and gold hardware, fixtures, lighting, etc.  I knew that I could save money if I was just willing to put a little elbow grease and spray paint into the brackets I already owned, and thus my Ikea hack gold shelf brackets were born.  I haven’t yet shared this bathroom with you, so I figured while we were here checking out the shelves today, I’d update you on all of the progress. (This post contains affiliate links). 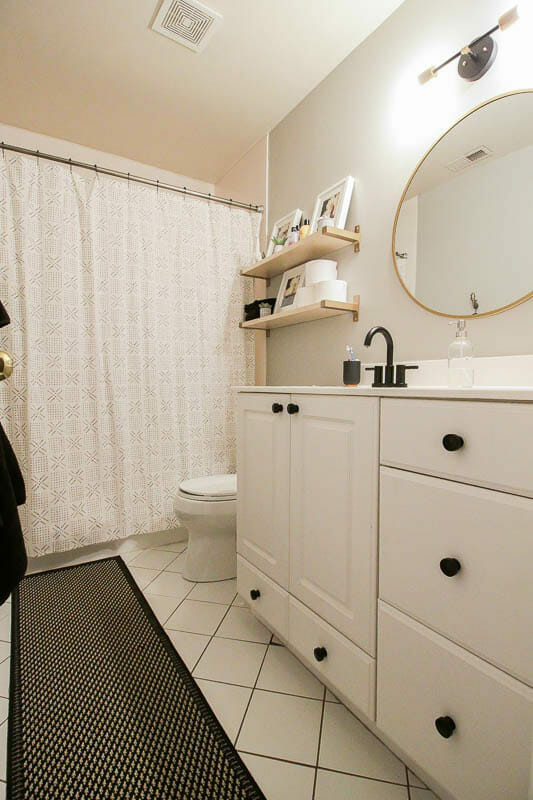 Because I want to share my Ikea hack first, let’s talk about the shelves.  As I mentioned, I had a couple pairs of the stainless steel Ekby brackets in my possession. I love the style of this bracket and have used it many times before, but I no longer love the stainless finish.  I hopped onto Home Depot’s website and looked at all of their gold spray paint contenders and read the descriptions.  I was looking for one that could stick to metal and would not need a primer. I discovered a new (to me) line of “Modern Farmhouse” spray paint by Rustoleum and it came in a metallic gold.  The reviews it received online were great, and it fit the bill of what I needed. 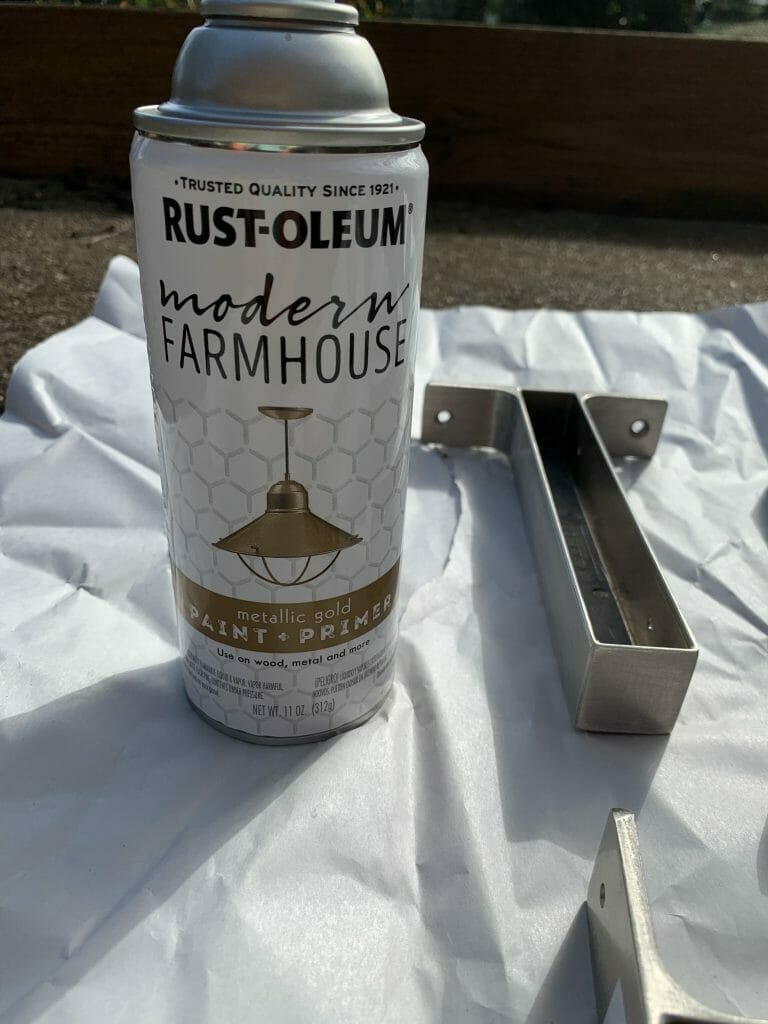 Before I began, I read the instructions on the can so that my brackets would be properly prepped.  I lightly sanded the brackets, then wiped off the dust particles and laid them out upside down on a piece of packing paper out on our patio. Below you can see what they looked like after a light sanding.  As you can tell, they didn’t need an aggressive sanding, just light enough to give the paint a rough surface to stick to. 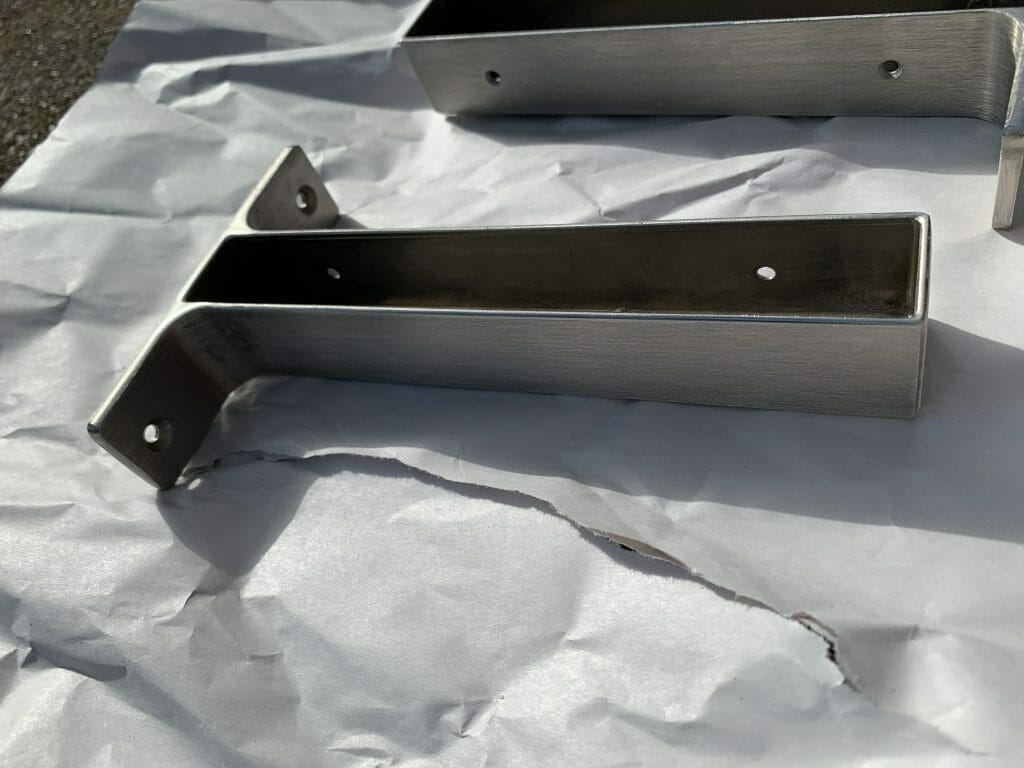 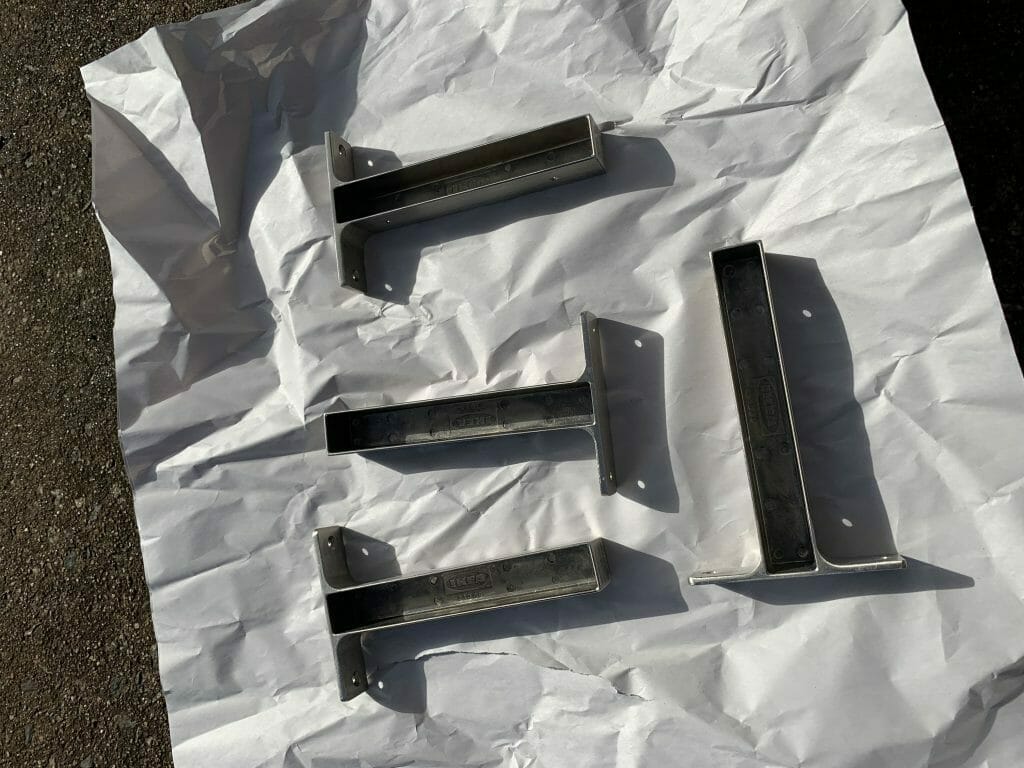 Next, I went to work, holding the can about a foot away while I sprayed making long strokes and making sure to hit each spot of the brackets that would show once they were hung.  After painting that side, I let them dry for a bit, then flipped them over and repeated the process on the other side. Below again you can see this was before I painted that second side, but you can really tell here how much sanding was needed. 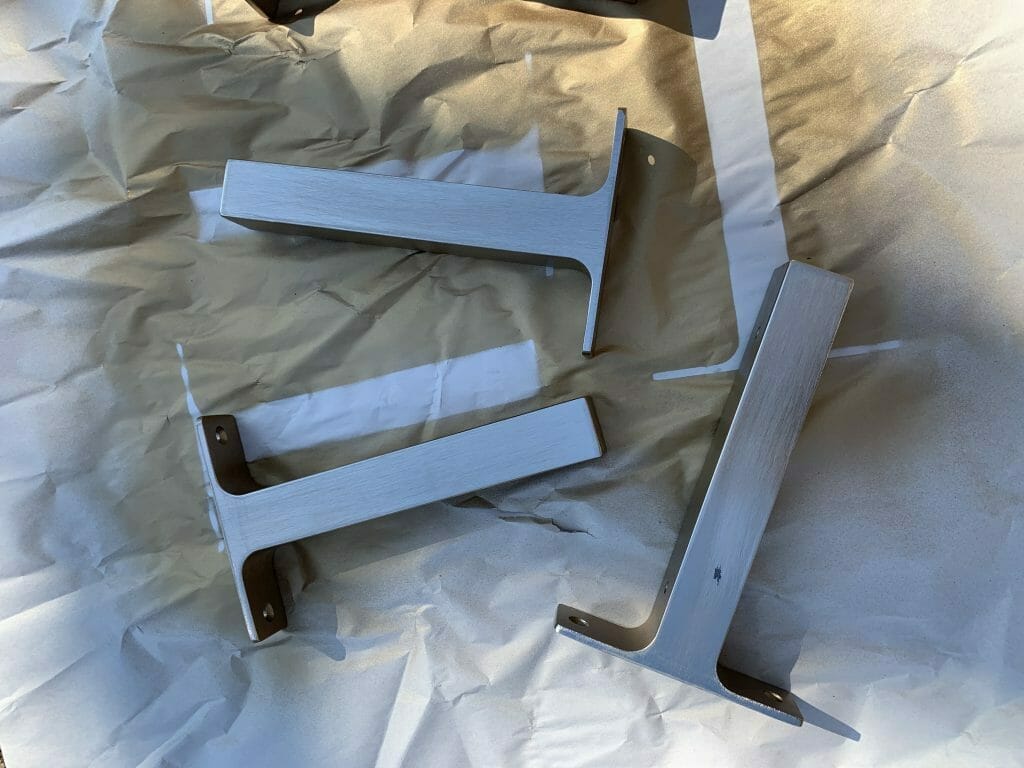 I painted the second side in the same manner as I had the first, allowed them to dry, then brought them inside to sit for 24 hours before I hung my shelves.  I wanted to give the paint time to really set before I would be handling them too much.

In the meantime, I headed to Ikea on my way to Sawyer’s soccer tournament, and picked up two of the birch colored Ekby shelves.

The next morning, Chris and Sawyer headed back to the last game of the tournament, and Emmy, Wilder, and I stayed here.  Emmy watched Wilder so I could get her bathroom shelves hung and styled with the items she had selected. 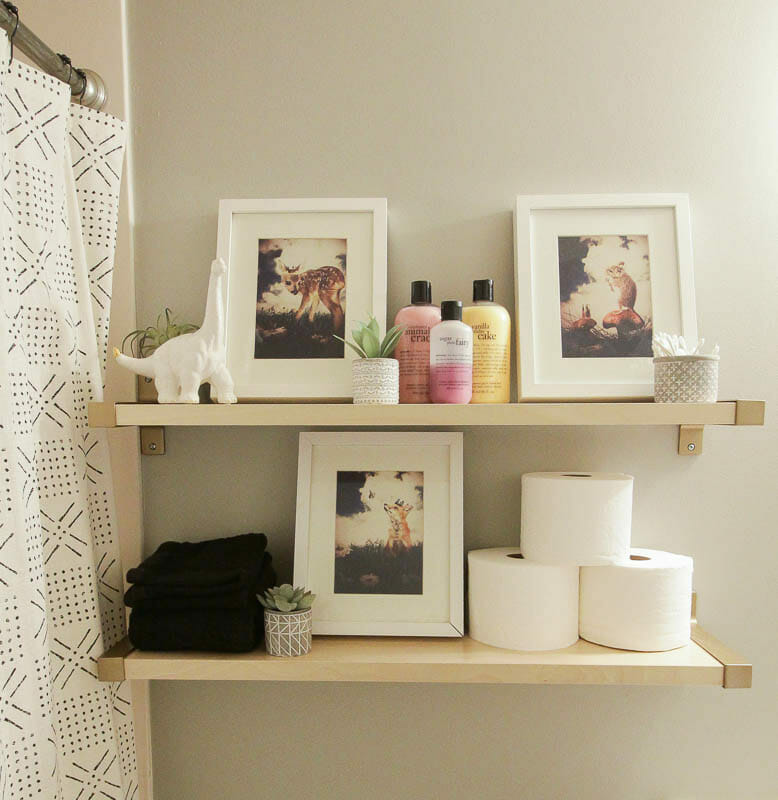 I used screws and anchors to mount the shelves since I was not fortunate to have studs placed where I needed them.  Let me just tell you that anchors are my least favorite thing to work with in the DIY world.  Ugh…. they are such a challenge!  The anchors that I have found to be the easiest to work with are these.  I thought I would share since I despise them so much and these aren’t SO bad.  I still need to hit the screw heads with a touch of gold either by putting the spray paint on a cotton swab, or by using rub n buff, but I am thrilled with how well the gold spray paint stuck to my metal brackets, and love the finish.  It’s not too shinny and almost has the look of a brushed gold. 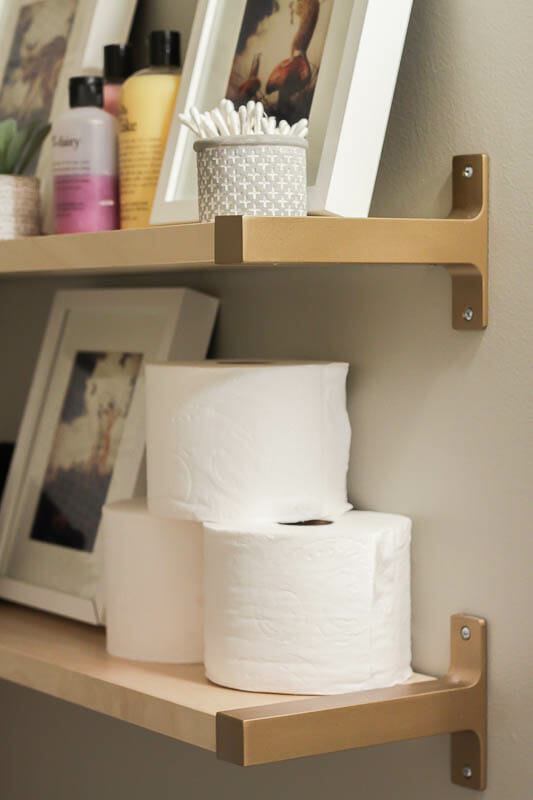 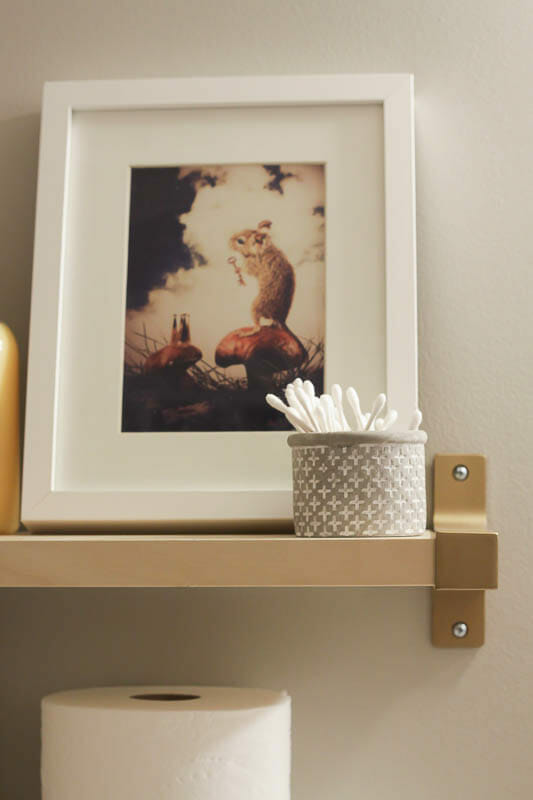 As I mentioned, I let Emmy select items for her shelves.  Although Wilder will use this bathroom as well, it’s more of her sanctuary.  She loves soaking in a long bubble bath, doing face masks, and enjoys spending time in here.  She wanted a neutral and modern feel with a touch of whimsy.  I let her select items from those we already had such as the artwork on the shelves. 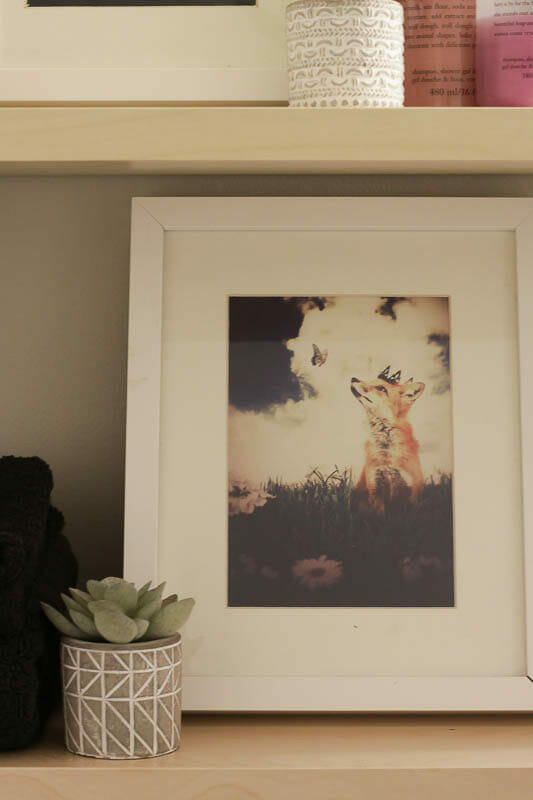 We also shopped for a few additional pieces.  She really wanted plants, but this bathroom has zero natural light (thus why the light is on in all of these photos).  We stumbled upon these cute faux succulents in miniature concrete planters at Target and bought a few as well as an empty planter I filled with cotton swabs. 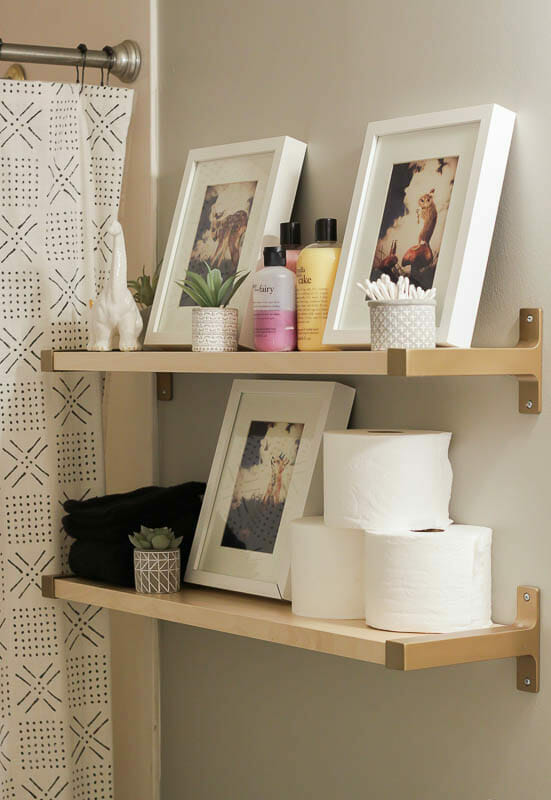 On another outing, we were at Pier 1 and found ans adorable white and gold dinosaur on clearance.  Emmy loved it and thought it would be a fun little nod to Wilder, so we snatched him up.  (FYI, they are out of the brontosaurus online, but still have this fabulous T-Rex.)  Lastly, I added some of Emmy’s philosphy bath products that she adores. (This one is her absolute favorite). 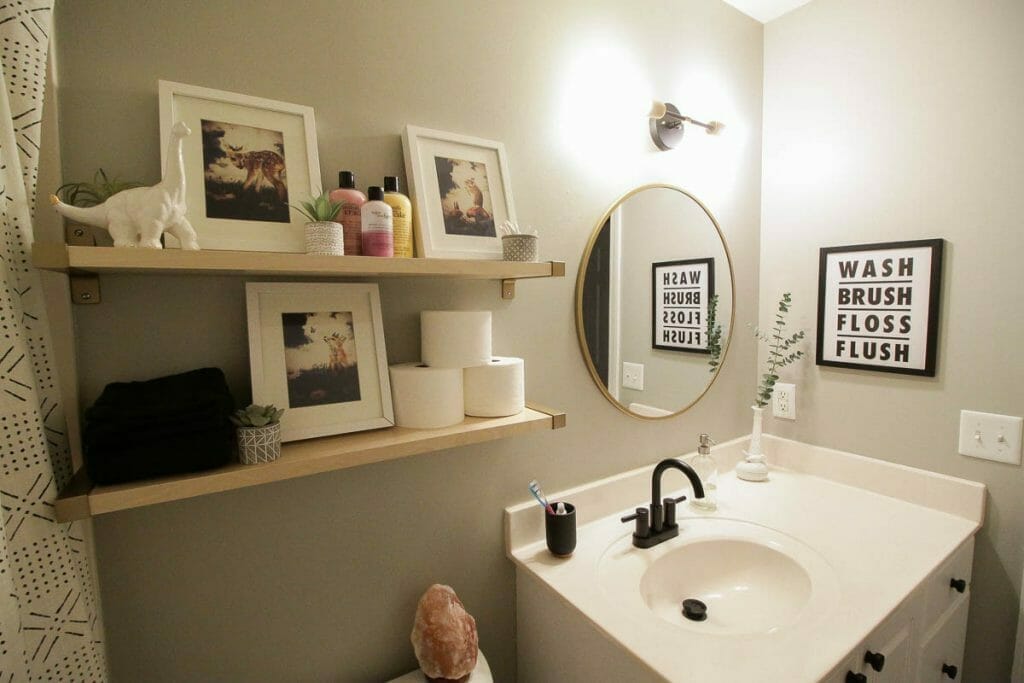 Now I want to talk about the rest of the bathroom with you and the progress we’ve made so far.  Of course, we all like a dramatic before and after, so let’s reel it back to the listing photo as a reminder of where we started. 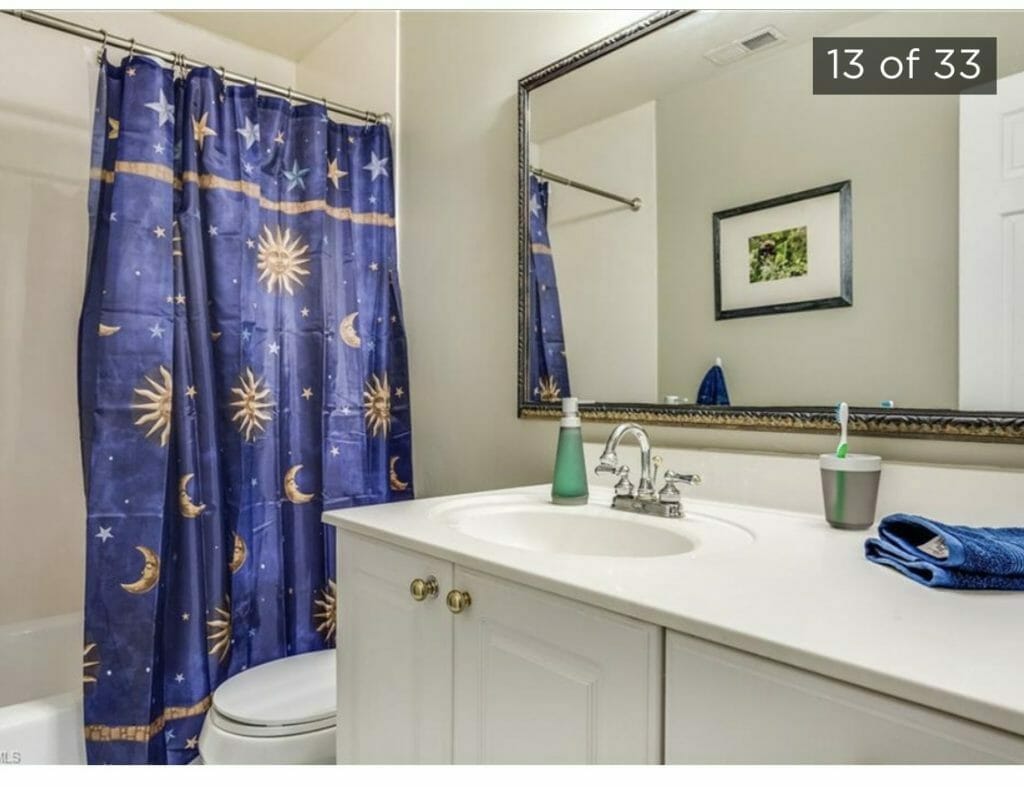 There are still some projects that need to happen in here, but we’ve made a lot of progress.  Emmy wanted a soft gray for the walls, and Sherwin Williams Mindful gray was the perfect warm earthy and light neutral. The shower curtain we had already purchased from Target is more of a cream than white, as is the shower surround, so this shade just worked well. 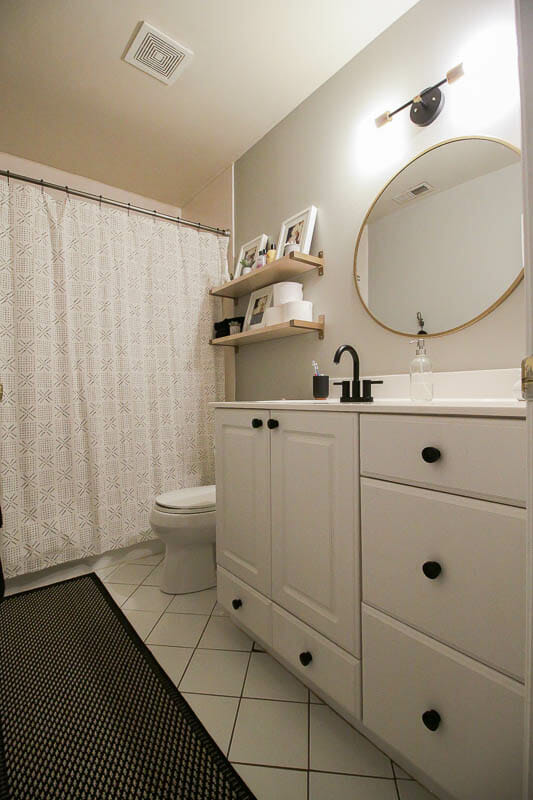 I found a black runner at TJ Maxx that fit this space perfectly. I tried a couple others before I settled on this one and the black helped ground the space, worked with the shower curtain, and didn’t fight with the tile too much.  The tile is not in great shape so my plan was to draw the eye to the rug as opposed to the tile, and I think it works… for now. 😉

The vanity was updated with modern hardware I scored for a great deal on Amazon and we used the same exact faucet we used in our master bathroom.  As you can see, I still need u update the toilet paper holder, but I did purchase the one I shared previously. 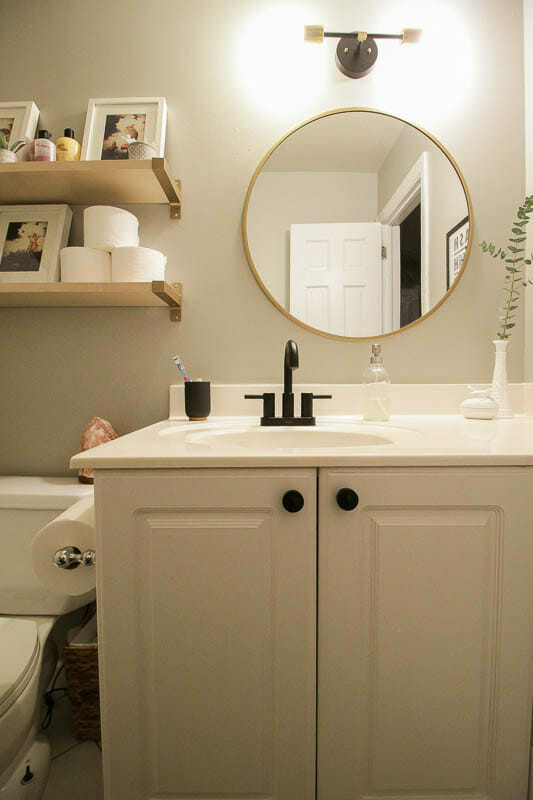 The mirror is the same budget find mirror we used in our master bathroom.  The sleek round shape immediately brings the bathroom into this decade, and the gold frame has an identical finish to my spray painted brackets. The light fixture…. well, I love the way it looks, but I had a terrible experience hanging it.  It’s from an etsy seller who also sells on Amazon and on etsy he has great reviews.  I love to support artisans when I can, so I was excited to purchase it from him.  Let me tell you, he did not provide the right sized screws to go with his fixture, so I was left with a light dangling from the wall while I scoured my own screws for something that might work quickly because power was shut off and we needed it back on.  I was NOT happy at all. I mentioned it on my instagram stories, and a follower asked if it was this particular shop because, as it turned out, she had the same exact experience.  Anyhow, I just wanted to share that in case you are considering one of his pieces…. go get yourself the right screws before you are stuck with the fixture dangling from your wall and the power off.

To the right of the vanity, we added an adorable printable from BT designs.  I had it (as well as a larger print I will be sharing soon!) printed through vista print.  The people at Custom Picture Frames were kind enough to send me frames in exactly the sizes I needed… they can create frames in any size, so I highly recommend them if you have something in an odd or large size to print.  I had this framed in black as I thought it would look best in there.  I’d love to eventually reframe the other prints in black as well for cohesion, but I was working mostly with what I had. 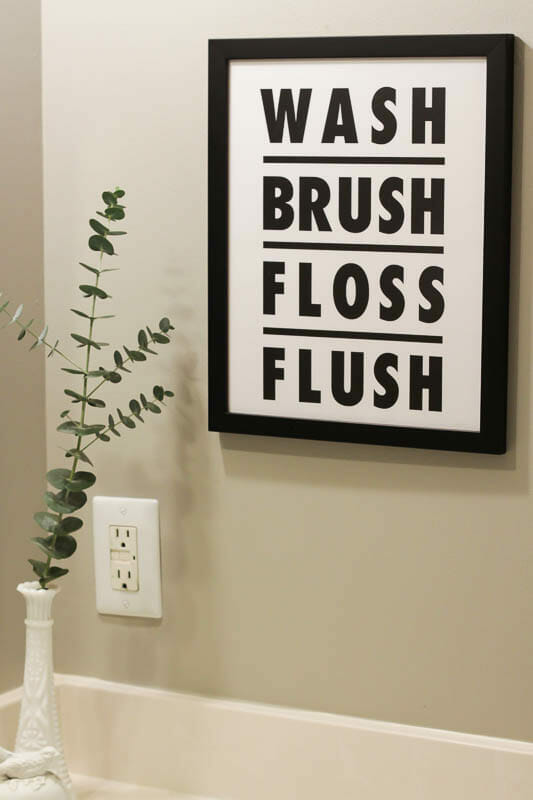 On the wall opposite the vanity and mirror, we hung three brass animal hooks we already had.  These hold Emmy’s towel, her face cloth, and then we hang Wilder’s towel on the third one when we are in there giving him a bath. 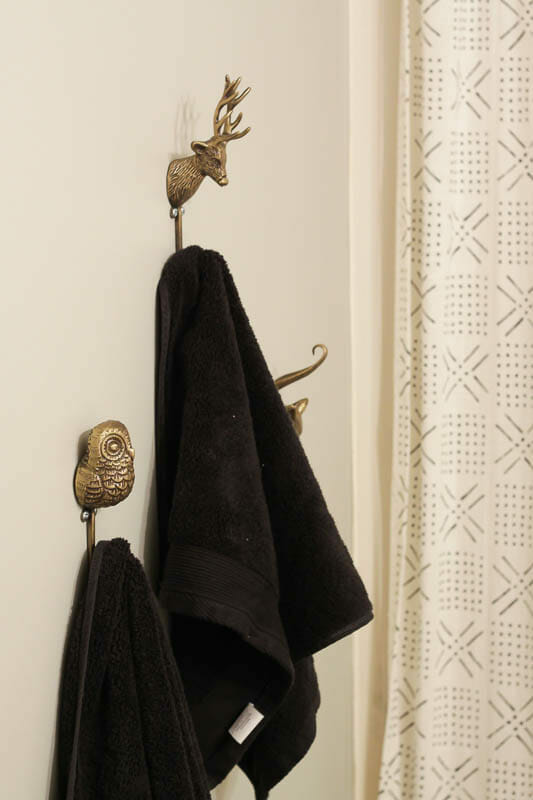 We’ve still got a toilet paper holder to hang, as well as some lighting and flooring items to take care of, but we’re really happy with the progress in this space.  Emmy loves having her very own little personal spa room, as that’s what I think of it as. 🙂

Thank you so much for visiting today to check out the progress in our new home.  I’ve created a shoppable boutique for you below in case anything caught your eye today.