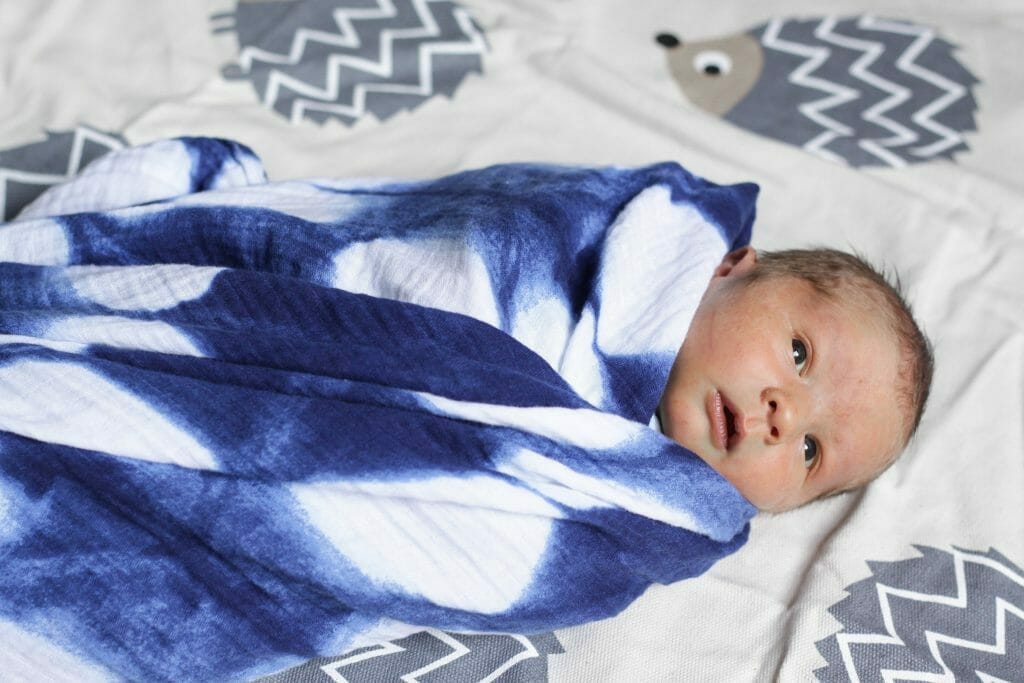 When Deirdre asked me if I’d like to hold him, “yes” slipped from my mouth faster than the thought had even formed in my mind.  YES.  I looked at Chris as the newly born baby was being handed to me, and said through watery eyes, “I am going to cry.”  His own eyes were wet as well.  So many emotions rushed through me at that moment.  I wanted to soak it all in, knowing that this baby was the last I would ever deliver in my lifetime.  All of the losses, grief, and pain washed away with my tears as the boy we had been waiting so long for was finally placed in my arms.  While the deliveries of Sawyer and Emmy were both joyous occasions, the finality of this birth and the completion of our little family made it all the more emotional.

I am not going to share the whole birth story because honestly I just don’t think they’re always that interesting, but I wrote that little paragraph to document just how I felt because I never want to forget. I will tell you that this was my third induction and it was the quickest with Wilder being born just a few hours after I was given pitocin.  Everything went smoothly, and I was fortunate to have one of my very best friends, Deirdre, as one of my delivery nurses.  Perhaps that is taking friendship to a whole new level because she’s now seen all the parts of me, but I trust her completely and her presence helped me stay strong and calm through it all.  I will forever remember and be grateful to her for that.  Chris snapped a photo of her holding him before she cleaned him up so I would have that to always look back on.

As soon as things in the delivery room calmed down, I looked at the clock and urged Chris to go pick up the kids from school so they could come meet their new brother.  While I waited for them, I snapped a first photo of me with my new baby boy.  (His eyes are wet from an ointment administrated to newborns). Also, don’t judge me in these photos… I was running on no sleep in the hospital the night before delivery! 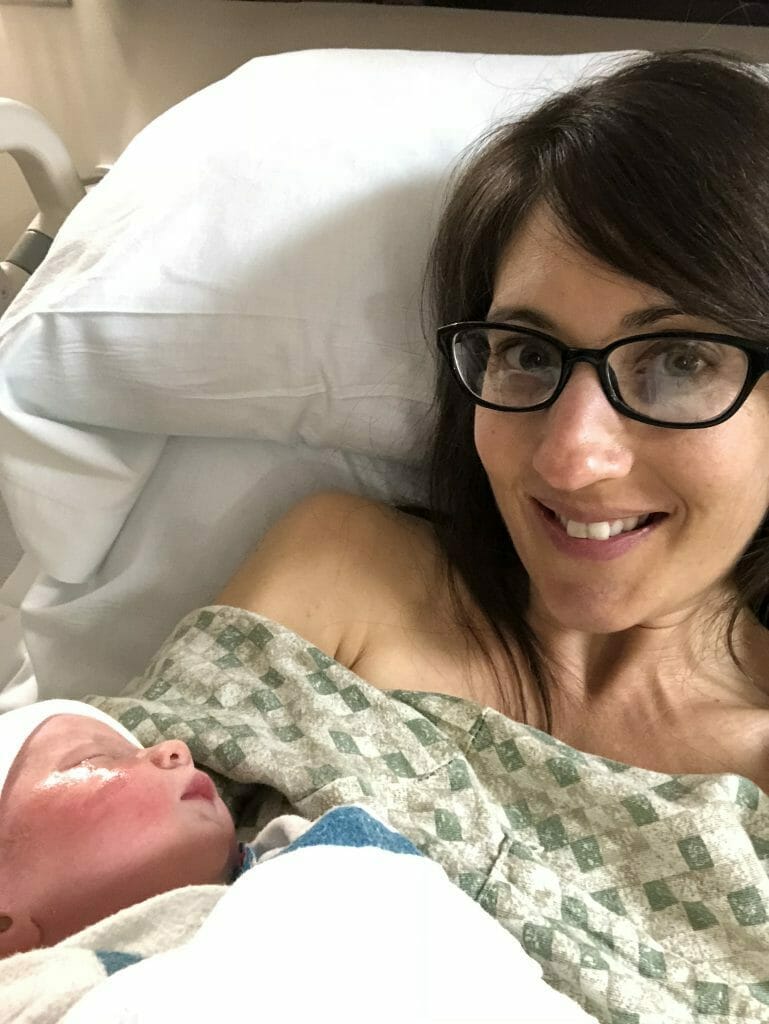 When they arrived, I watched as they fell in love with him immediately.  He actually looks just like Sawyer when he was born!  A nurse was kind enough to take our first photo as a family of five. 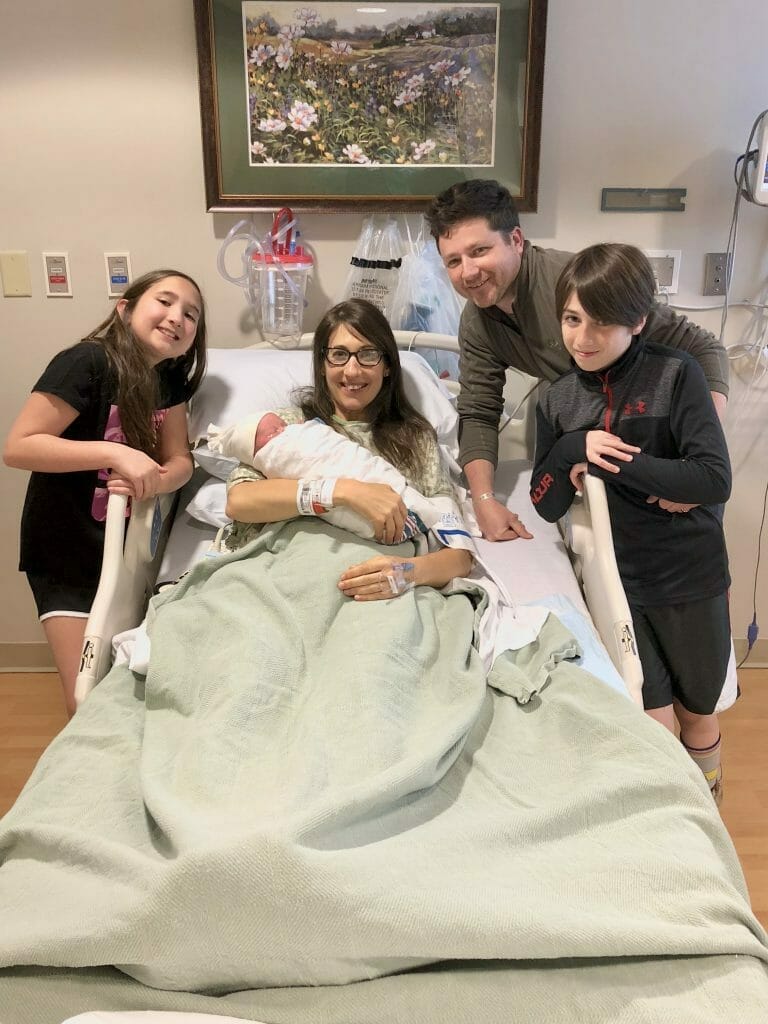 Their visit was short as they both had plans for the evening and had to get to their destinations on time, but they each took a turn holding their brother.  Chris dropped them off and being the best husband ever, returned with a Dairy Queen mint oreo blizzard for me!  That was all I wanted after delivery… Throughout the third trimester I was on the borderline of having gestational diabetes and was poly (meaning rather high amniotic fluid), so I had been cutting down on carbs and was not eating much sugar.  I normally eat rather healthily, so it was a challenge to cut back even more and I wanted to treat myself to the biggest ice cream indulgence ever!  Let me tell you, it was delicious!

We spent the next two nights at the hospital.  I wanted to go home after just one night, but we had been waiting on Wilder’s circumcision which we then found out wasn’t going to happen until the next day so we had no choice but to stay.  When we were discharged, I was so happy to be going home to my own bed and to my family. We put Wilder in his car seat and snapped the quintessential going home photo. 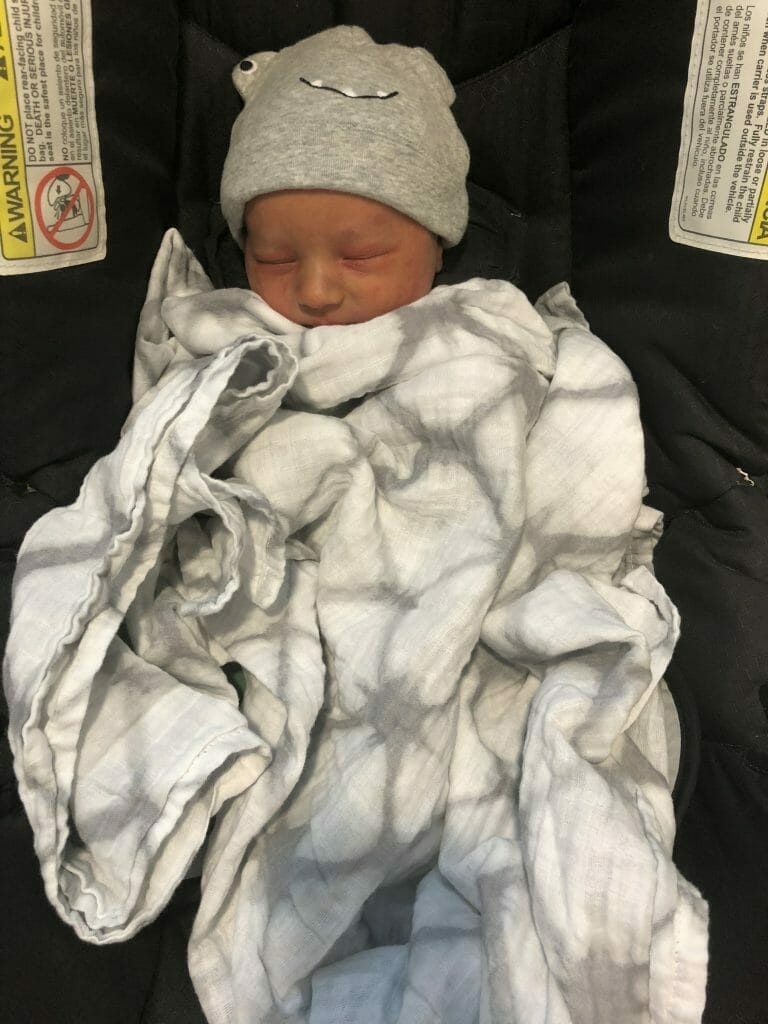 We were fortunate in that Chris was given two weeks of paternity leave.  Having him home for all that time was phenomenal… I know I could have handled life if he had gone back to work, but what I loved about his time off is that we spent it together, running errands together, hanging out in the yard, having family dinners every night.  I knew I still loved my husband, but it was really great to know that I still really enjoyed spending lots of time with him.

There is certainly something to be said for having a baby years later with the same man I had my first babies with.  We’re older and more comfortable in our skin.  We have an understanding and pattern of communication by now.  We’re much more able to laugh at ourselves.  I remember when Sawyer was born and falling in love with Chris all over again as he held our son for the first time.  This time around, it felt so much more like a shared experience and I was able to laugh much more easily at all of the things that naturally go with having a baby… things I was more embarrassed by when I had Sawyer and Emmy.  While we were at the hospital, I got up to go to the bathroom.  In the bathroom, I removed my gown and took one look in the mirror noting the large slightly droopy breasts, the sagging belly pooch, and the mesh underwear which was so padded it looked like an adult diaper.  I couldn’t help it, and I just started to laugh.  I came out of the bathroom just like that and said to Chris, “I thought I would give you a peek into your future, because this is probably really similar to what I will look like when I am 90, diaper and all!”  Anyhow, I just feel really lucky to have that kind of relationship with Chris and enjoyed having him home and am currently dreaming of a way we can both work at home together one day.

As for Wilder, he’s got that third child thing down already and seems to roll with whatever we have going on. He’s gone to soccer games, Sweet Clover, Costco, Wegman’s, and even out to lunch downtown.  We just try to make sure I’ve just nursed him before we head anywhere so that I won’t have to feed him while we’re out.  We’ve used the baby wrap for many outings, and he just loves it and falls right to sleep.  I was in heaven  at the farmer’s market with a 6 day old sleeping baby against me, and an organic ice cream in my hand.

He’s just as content to hang out at home, and we’ve put the hammock to good use.  Chris was gardening, and Wilder and I were supervising from the hammock. 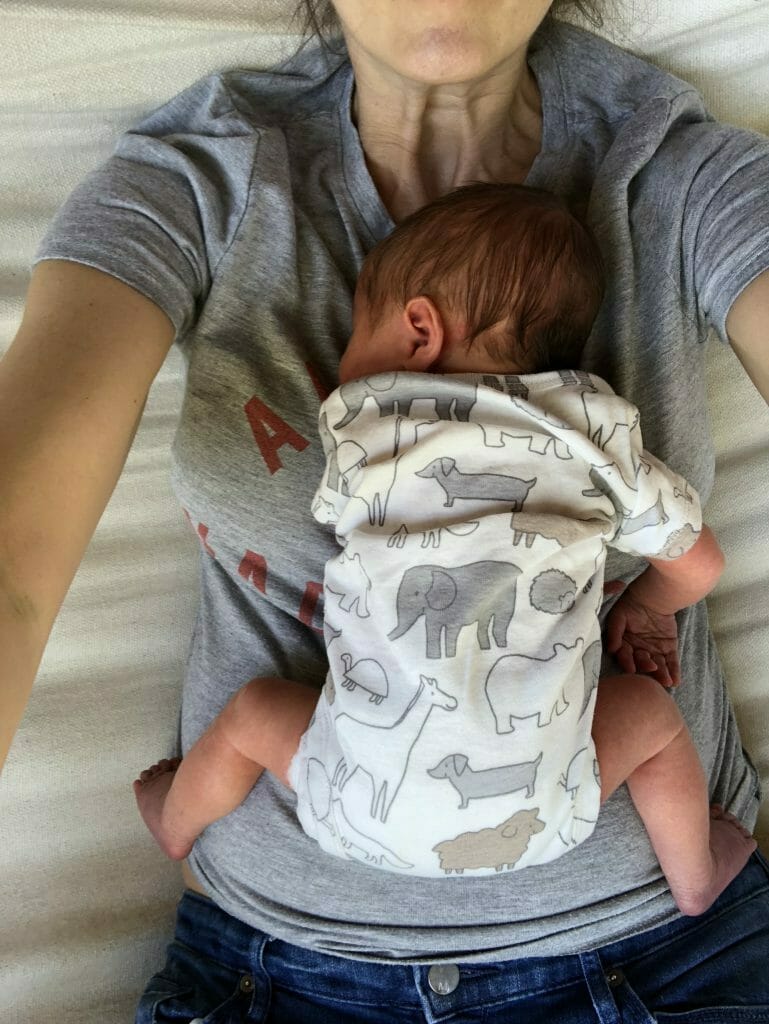 At home, it’s been a little adjustment for the dogs and kids, but everyone has handled it well.  The dogs were very curious about and slightly nervous around Wilder at first, but now they’re comfortable with him.  The day we came home, they both immediately ran to check him out.  I think they were also just happy that we were finally home again. 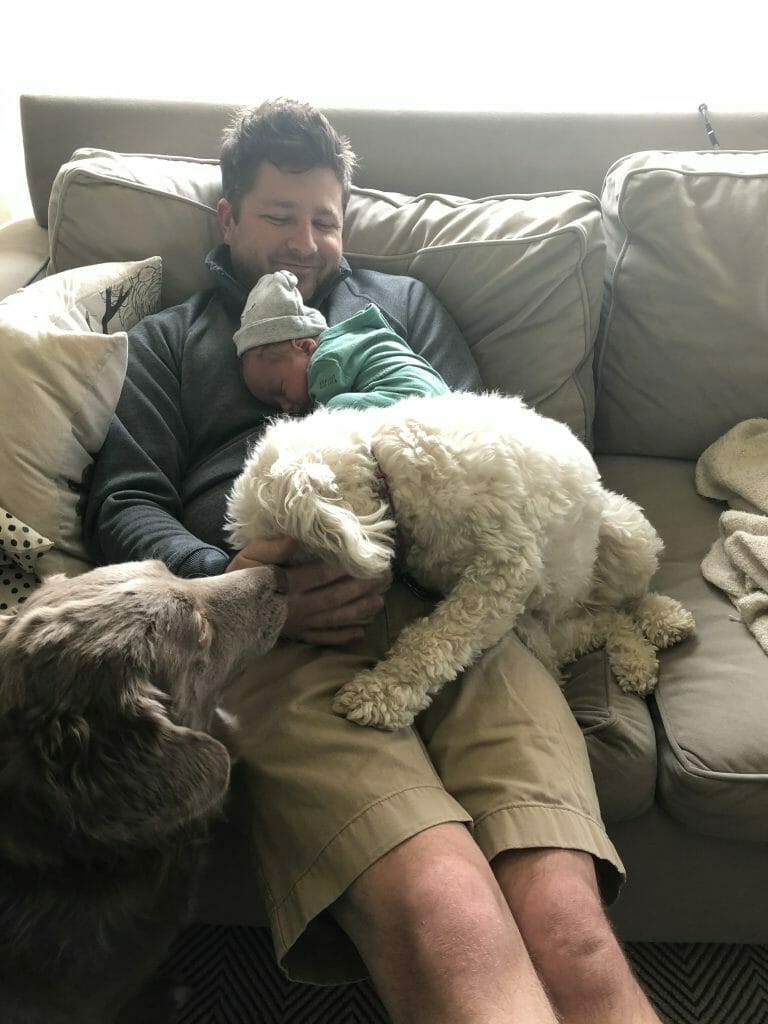 Sawyer and Emmy have been rock stars, offering to help with him when they can.  Sawyer has taken family life and health by now, so of course he has more of an understanding of what goes on from pregnancy right up to childbirth. When I first arrived home I mentioned being sore all over… my back hurt from that hospital bed.  Sawyer looked at me and said, “Especially below the waist!”  That kid cracks me up. Emmy loves to help us change diapers, and especially loves holding her little brother.  This photo is dark and low quality, but the look on her face is priceless to me; it’s just full of love. She’s great at soothing him as well. 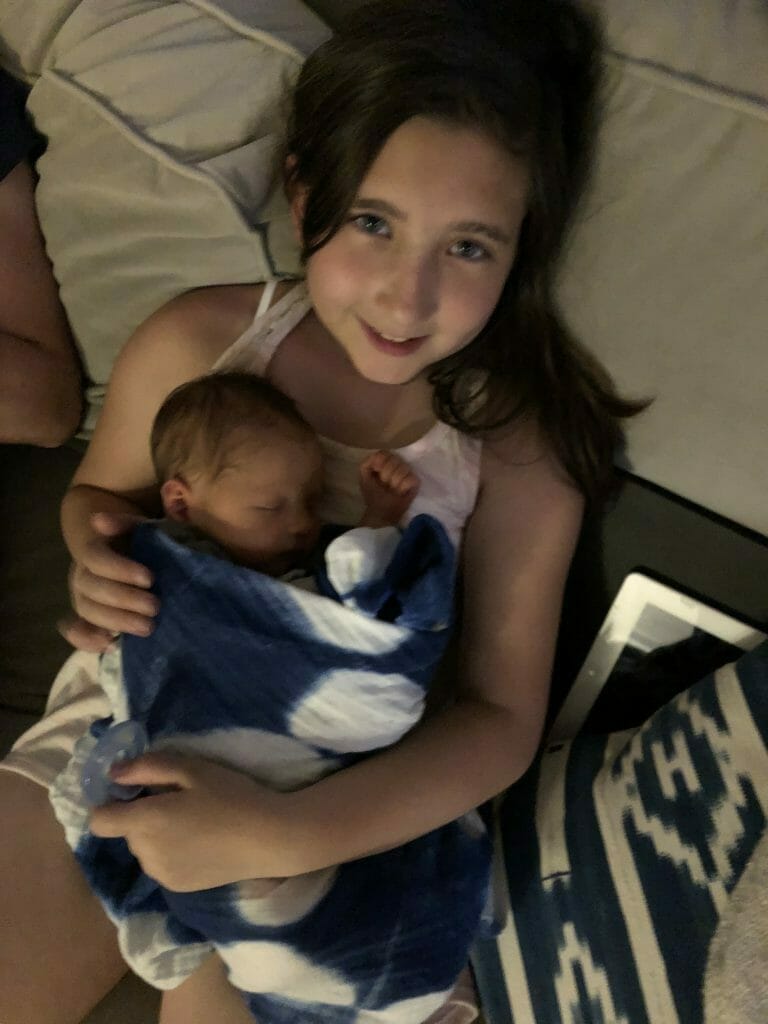 All in all, things have been going pretty well, and we are all very much in love with Wilder. Of course, I can’t leave you with mostly phone photos, so I thought I’d share some photos I took Monday afternoon on my bed. 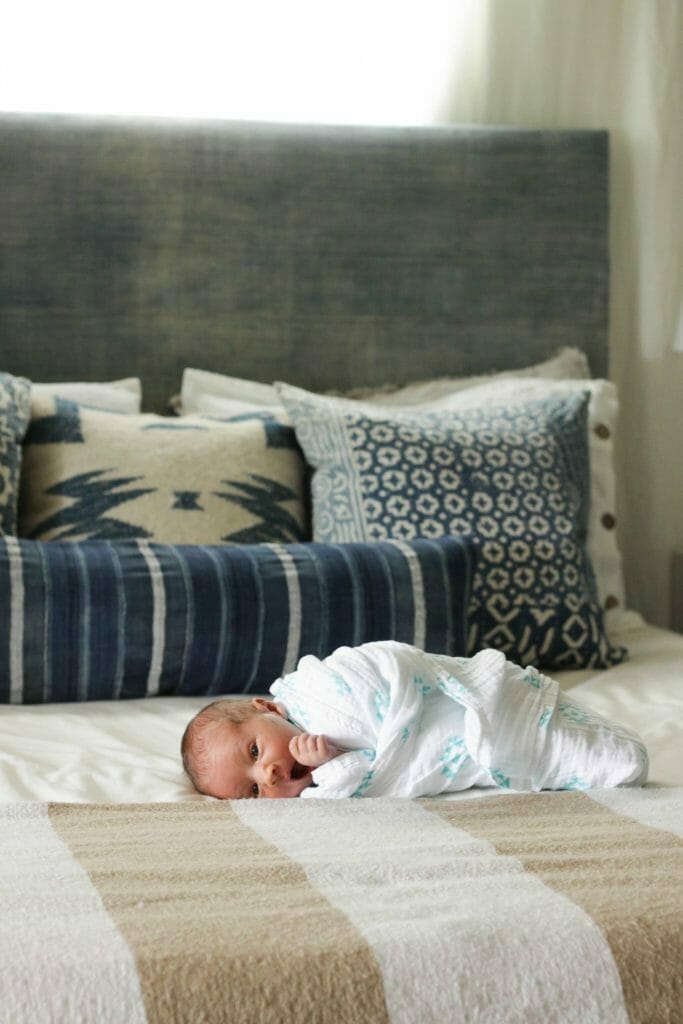 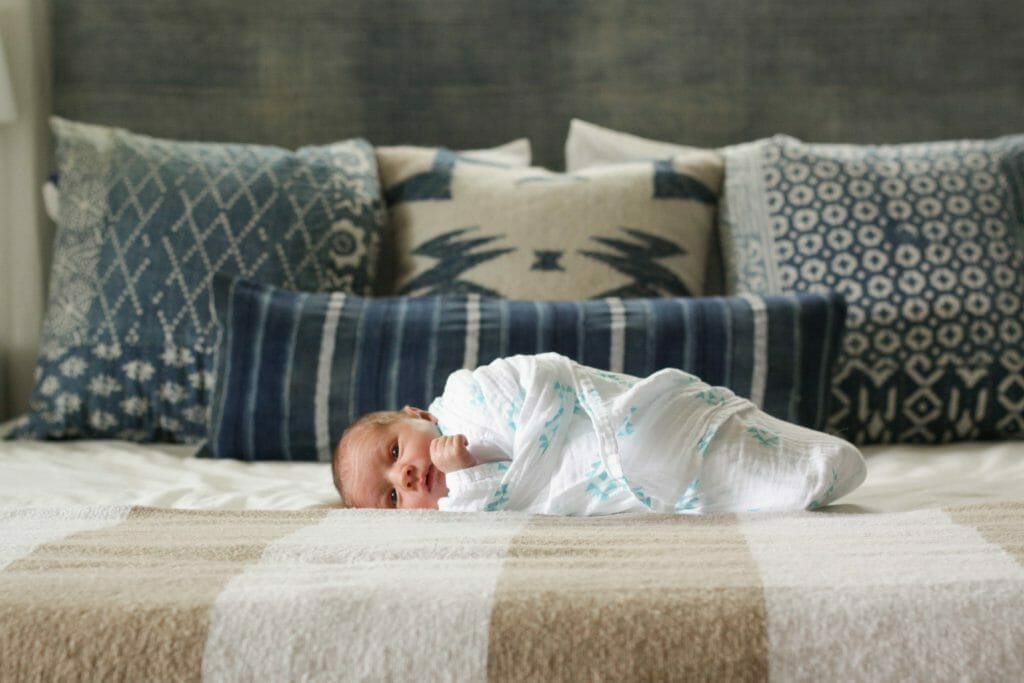 He loves to be swaddled, but loves to have his hands free. 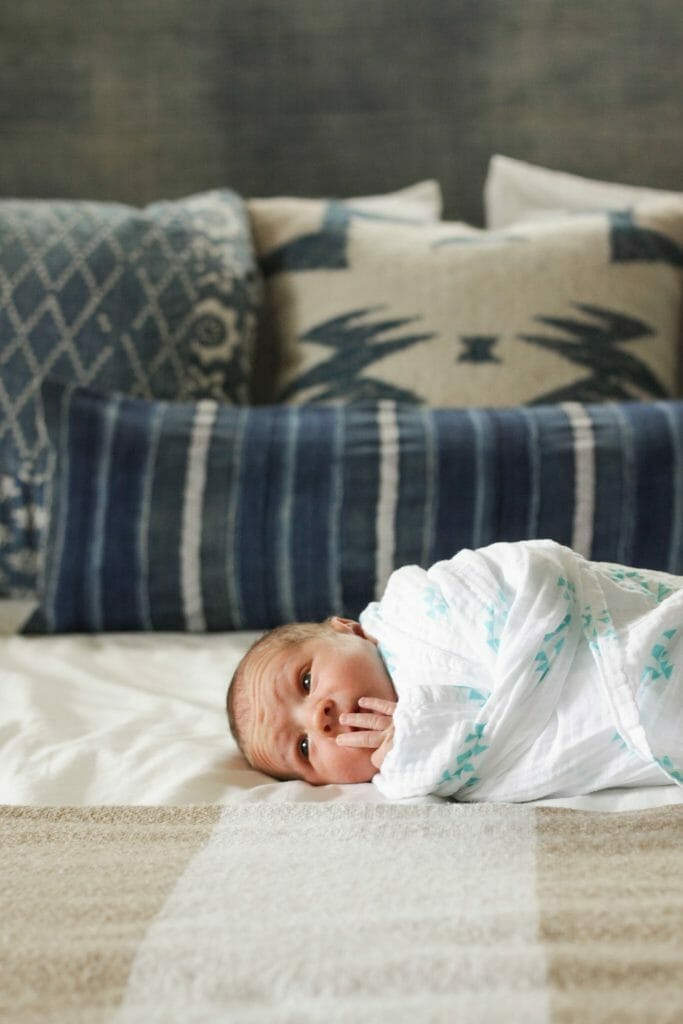 I am hoping to get some photos of the kids with him soon!

Thank you for your support throughout this journey with us…. Here’s to many more adventures ahead for all of us.