Happy Tuesday!  I spent yesterday at Sweet Clover working with Sarah and I am so pleased with how it’s coming along for this weekend’s sale!  If you want to check it out, click here to see our facebook album.  We’re in such great shape that I don’t even have to head there today- yay!  I’m headed to my salon to chop off all of my hair though- can’t wait!  Ever since I cut a bunch off and donated to locks of love last month, I’ve been itching to chop it even more.  If you never see a picture of it, you will know why. 😉

Anyhow, two weeks ago I revealed our playroom to you.  I had every intention of sharing more about the light fixture we added before that post went up, but the light went up just a few days before the reveal and I didn’t have time.  So I thought I’d share more about it today!

I ordered the Lamps Plus Possini Euro Design 15 Light Glass Orbs Ceiling Light (boy, that is a mouthful! In my own words it’s an awesome sputnik inspired light!). 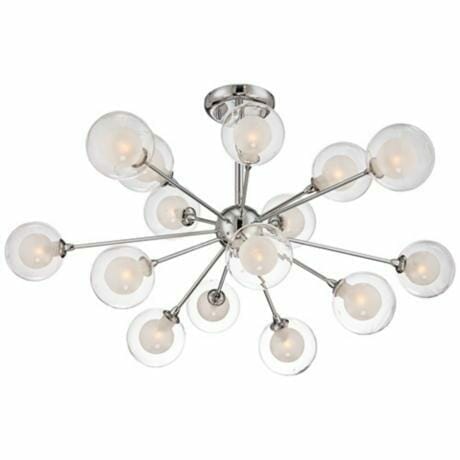 I selected this light for several reasons.

1. I wanted something that had several lightbulbs as our playroom gets almost no natural light.

2. I wanted something affordable (Yes, it was provided to me by Lamps Plus, but that was at my request.  I was looking at this light to purchase myself otherwise, and this one was totally within my budget). In case you don’t recall, here is the playroom with its new light.

3. I wanted something that hung from the ceiling, but not too low, as we have low basement ceilings, and I didn’t want it being in the kids line of play fire.

4. I wanted something that added a fun vibe to the kids space and would fit the vibe of the playroom.  The light fixture had to say “this space is for people with imagination and bright ideas!”

This light seemed to tick all of my boxes.

This space found on Apartment Therapy  has a similar light also from Lamps Plus.  This is my favorite inspiration picture and had a more grown up vibe of the look I was going for.  It has black, white, wood, and even has similar bookcases.  The light adds a punch of personality, in my opinion. 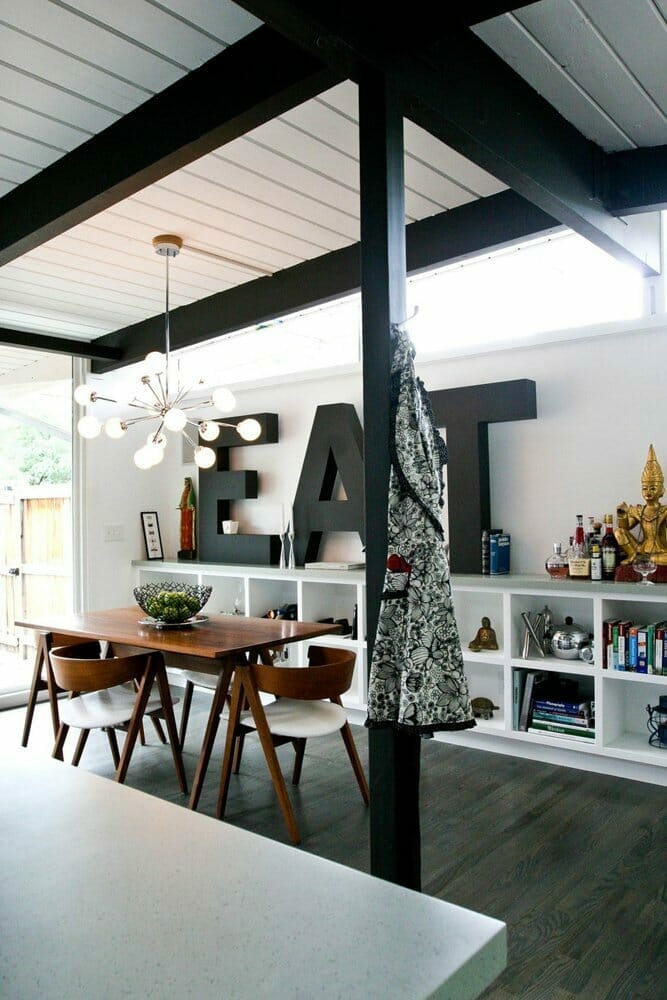 Another great inspiration space came from Apartment Therapy as well.  This nursery has such an eclectic feel, and the light fixture gives it a little more edge and a modern touch.  Of course in this space, the light also draws attention to the amazing ceiling.  My space doesn’t quite have an amazing ceiling yet. 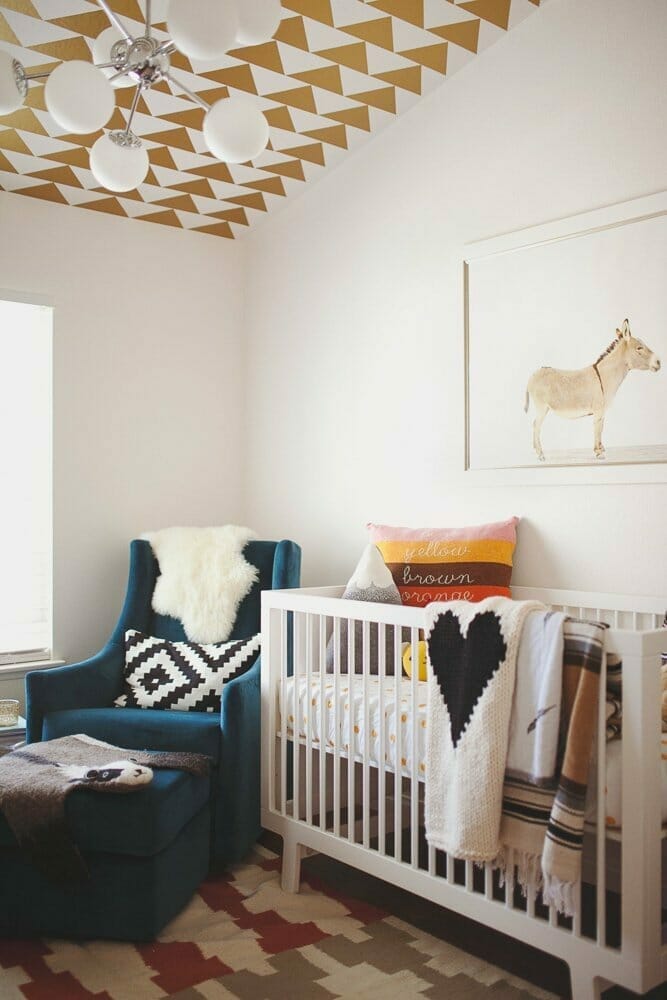 And now let’s check it out in our playroom again! 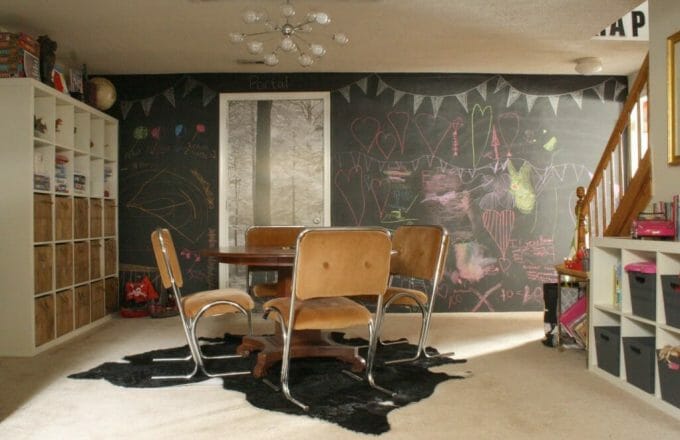 So far, so good!  We are thrilled with this light.  We love the everything about it- the style, the hang length from the ceiling, and the finish.  After it was installed, Emmy got to do the honors of turning it on for the first time.  We all went downstairs, and she flipped the switch, and a collecting “oooooh” echoed through the room.  It gives off the perfect amount of light, which is exactly what we needed.  Emmy and Sawyer sit at that table with their friends drawing and coloring, working on school projects, and building with play-doh.  I don’t want to wear their eyes out at such a young age, so we needed quality light.  I also love the color the light gives off- it’s a perfect white light.

Here is a look at it all lit up for you. 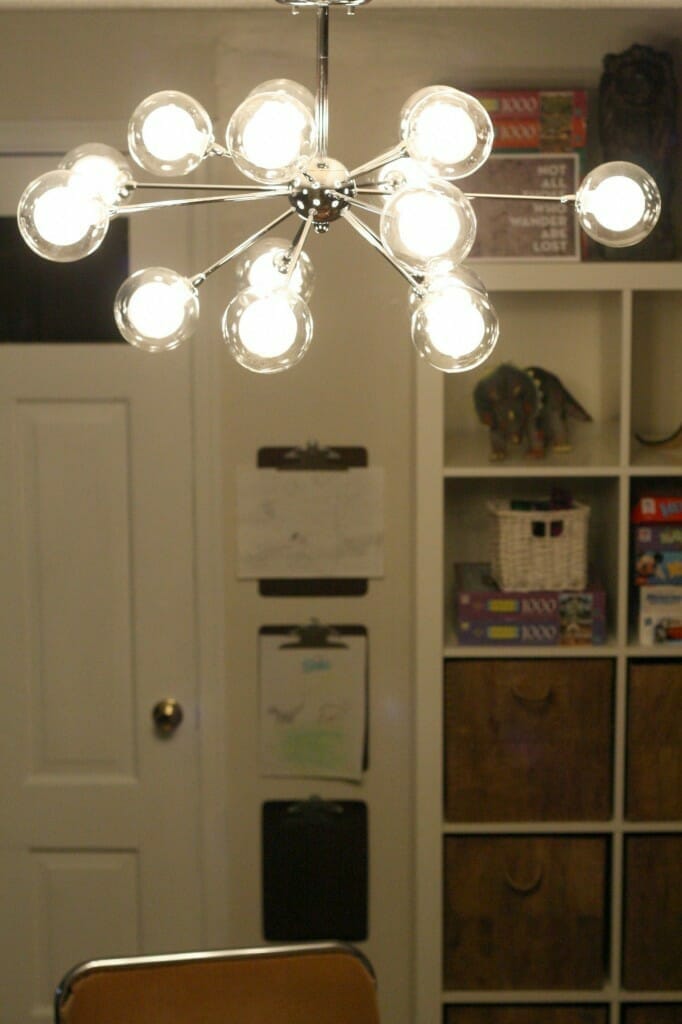 And here it is lighting the space. 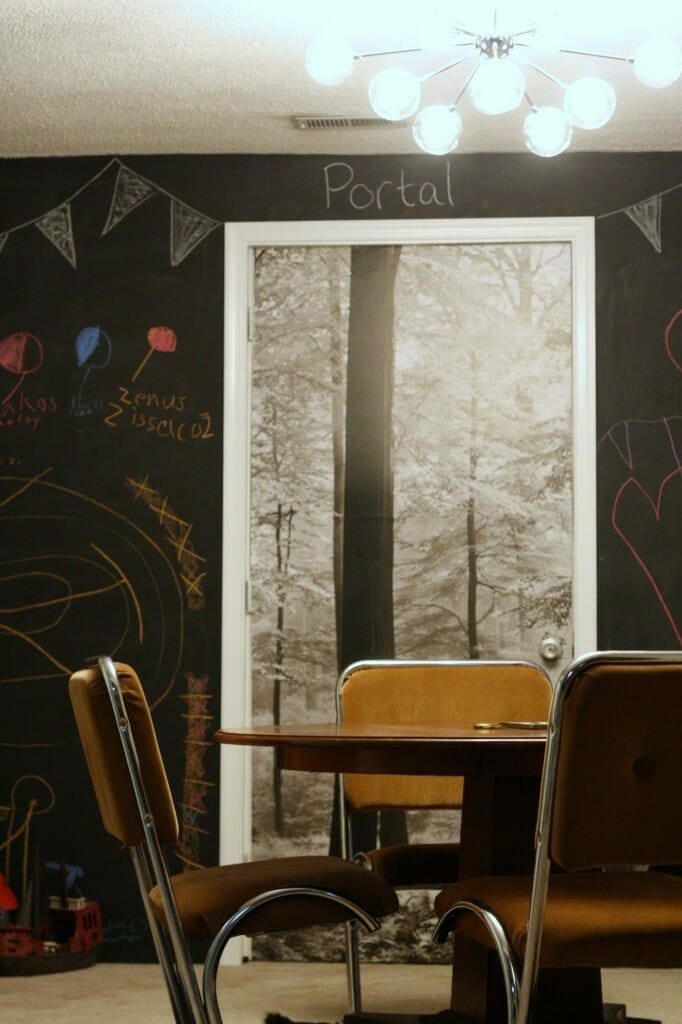 To read more about the playroom reveal and its other elements, you can check out the original reveal post here.

By the way, I don’t know if I mentioned what the lamps plus light was replacing…. it was one of those hideous fluorescent lights, and the box cover was even missing; so it was pretty much two fluorescent bulbs in the ceiling.  Anything would have been an improvement, but I don’t think anything could have improved it as much as this light!

Lamps Plus provided me with the light fixture for our playroom.  All opinions are my own.