First of all, I want to thank you so much for the outpouring of love on our big news that I shared on instagram and the blog yesterday.  We are seriously over the moon!  Today I want to talk about Halloween though!  Last year, I shared a super simple DIY bee costume that we created for Emmy. This year we have another super easy and last minute costume idea for you that would work for girls or women.  Emmy actually wanted to be Supergirl so we bought her this costume from Amazon and she plans to wear it trick or treating. However, in one of my thrift store visits I found an amazing bohemian style vintage dress in a lovely blush pink and I just knew we could use it for something.  While she’s still going as Supergirl on Halloween, she’s decided to use this dress for her Halloween party at school, and we’ve used it as the basis for a last minute easy elf costume. You could truly use any longer romantic style dress, but let me show you how this all came to be. (Affiliate links included- thank you for your support!) 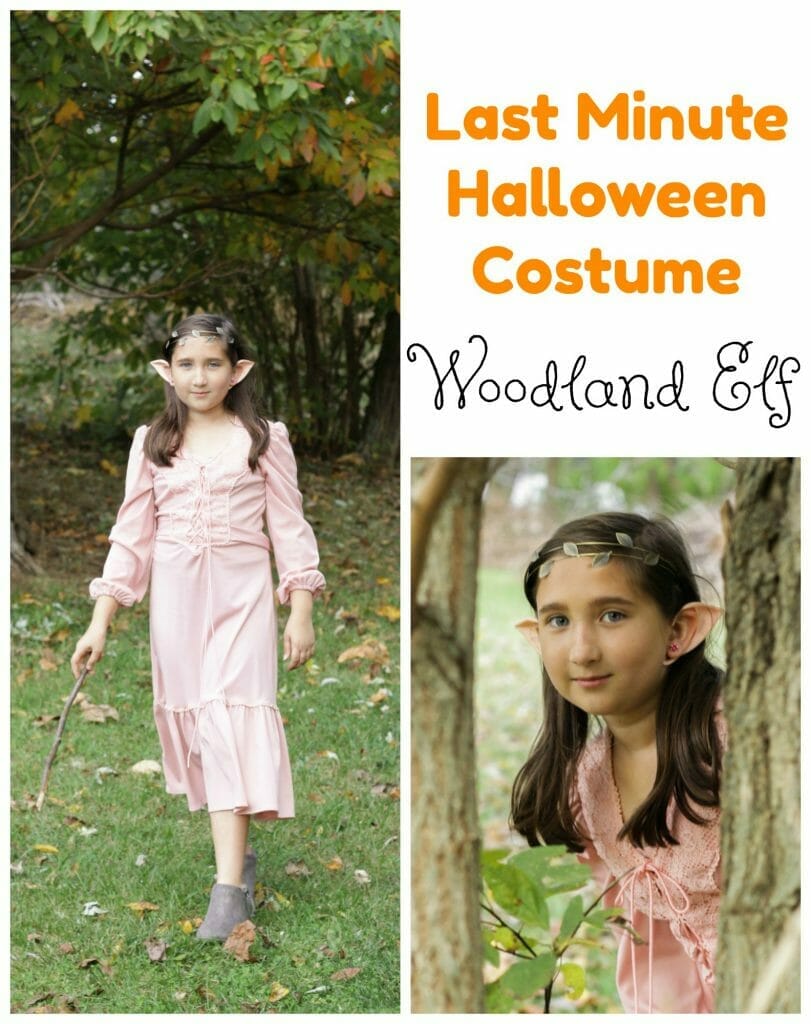 As I mentioned, the dress was a thrifted find, and I feel like long flowing romantic dresses could be rather easy to find and the options are truly aplenty.  We drew inspiration from Galadriel of Lord of the Rings, but Sawyer also informed us that her costume was also very much like Zelda.  Anyhow, as I mentioned the dress was our base.  We wanted a magical woodsy looking crown and luckily Emmy already had a gold leaf headband from Claire’s, but Amazon has several in a similar style like this one, and if you have prime you can get it before Halloween.  And the last element we needed was a set of elf ears!  We had seen some amazing pairs for sale at the Renn Fest earlier this Fall, but alas the price was way out of budget!  We found several sets on Amazon, read the reviews, and eventually settled on these which came with a few varieties.

While we love the style of the ones in the upper right, they just didn’t work as well on Emmy’s small ears, so we used the set pictured on the bottom as you can see here. 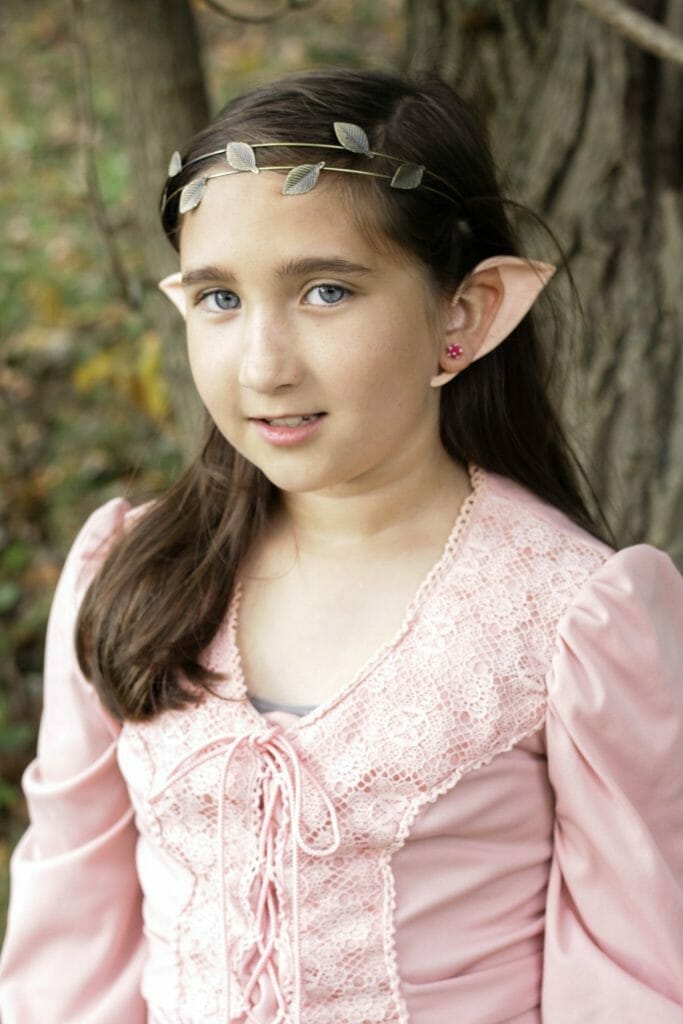 Lastly Emmy put on a pair of silver-gray Cat & Jack booties from Target to complete the look.

And of course, we headed outside for a photo shoot! 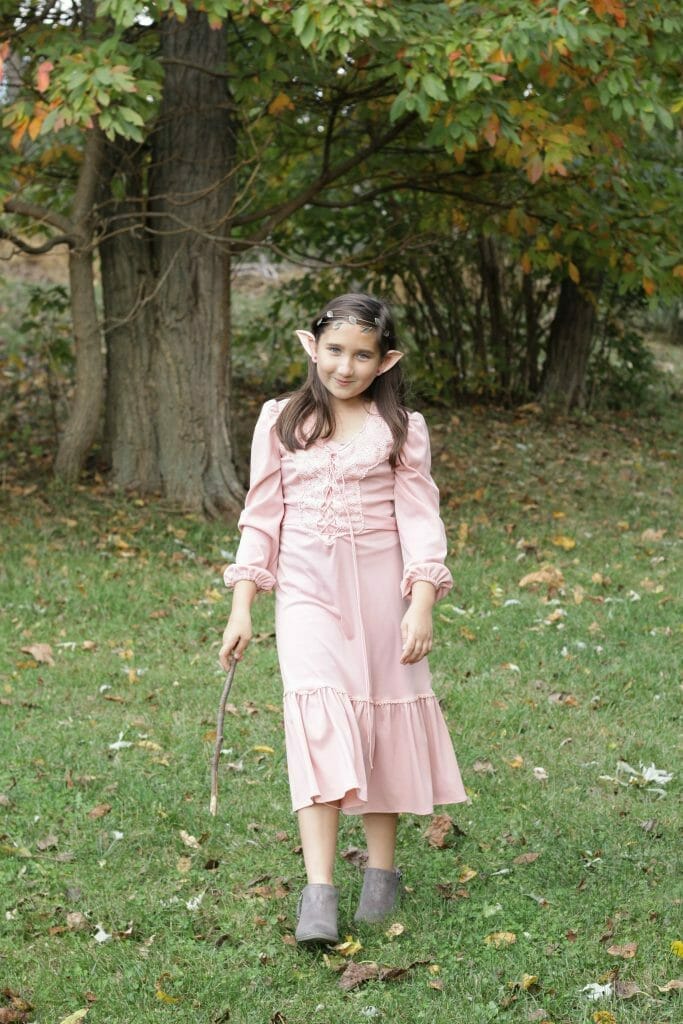 Would you believe this dress is actually adult sized?  Unless I am reading the vintage sizing wrong, which I suppose is possible.  Either way, it looked small on the rack and I knew it would work for Emmy. 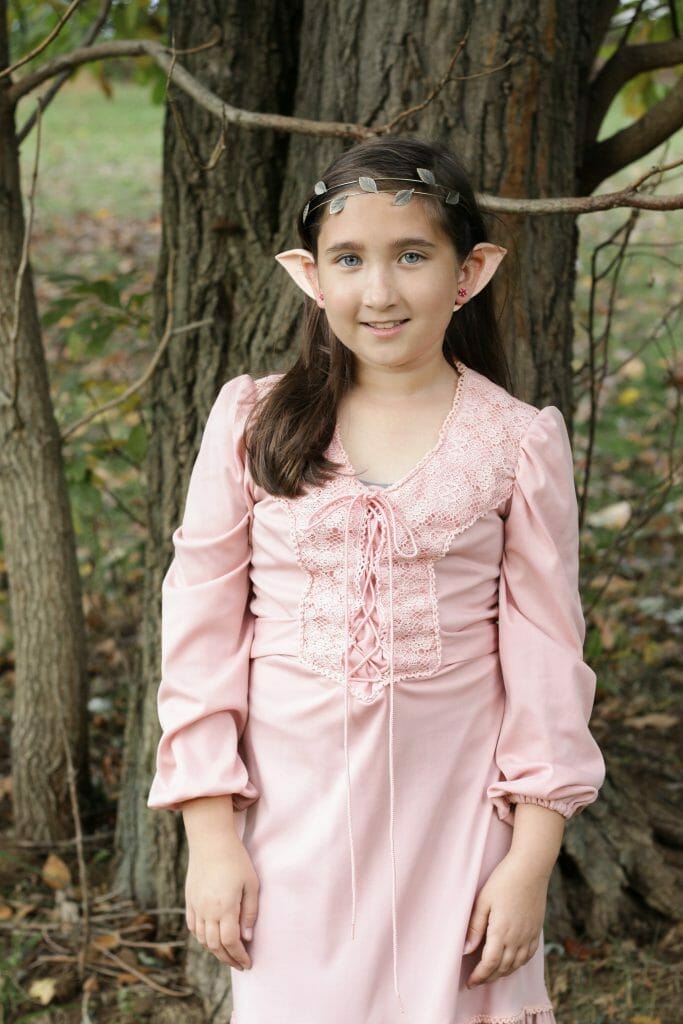 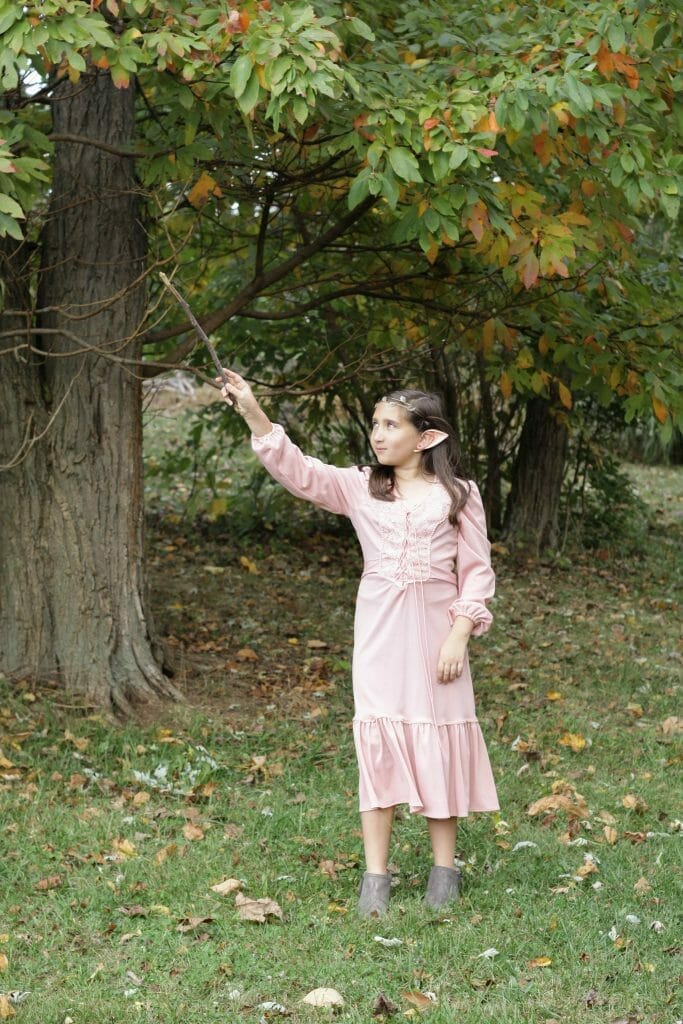 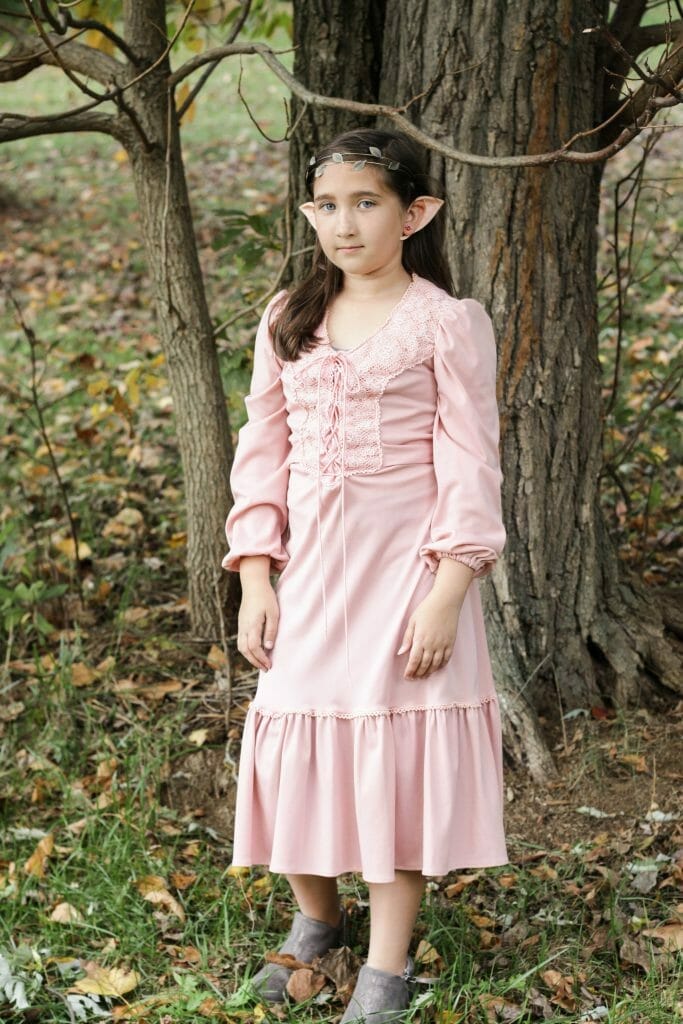 And this would be when I told her she didn’t need a wand…. as you saw above, she won. 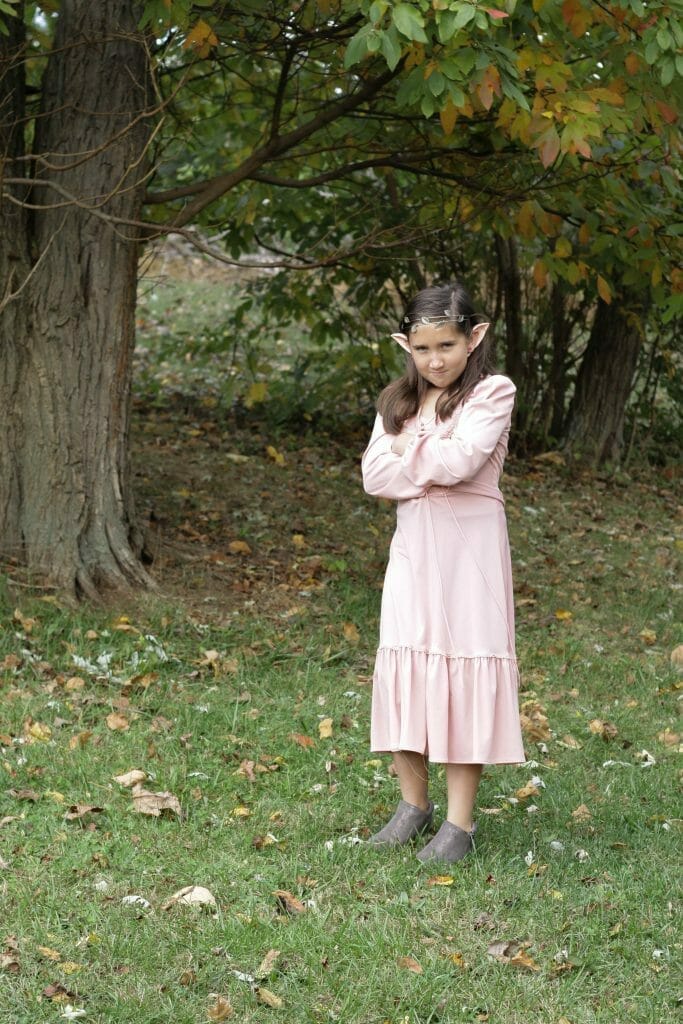 This one is my absolute favorite even though it doesn’t show off the dress as much. 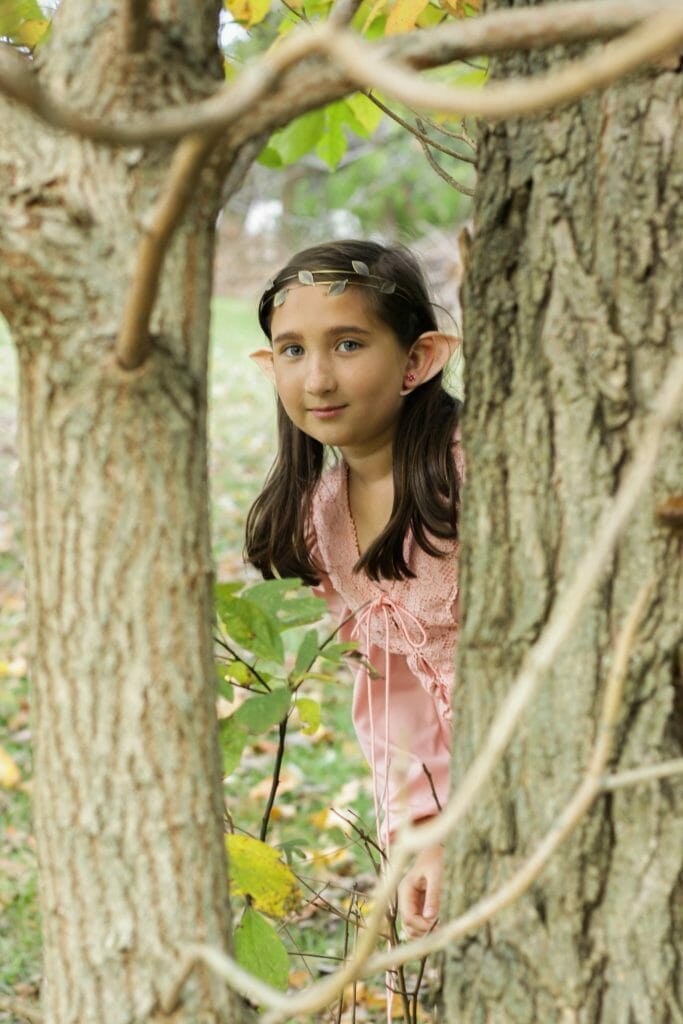 If you want to get this look, here are a few options for you, mostly from Amazon so you can Prime that baby right over! (Have I mentioned how much I adore Amazon Prime?)