Oh man, you guys…. I have been meaning to write this post and just had to find the time when I was in the right frame of mind and also the will to get it done.  A month ago, I told you all about the poultry swap we went to here in Western Maryland, and introduced you to our 6 new chickens, all young pullets.  We were all over the moon excited to have built the coop ourselves and to have it filled with our very own soon to be egg-laying hens.  Enamored by the varieties available, we brought home several types and quickly learned their personalities.  There were two that we especially had a soft spot for, but one hen that stole all of our hearts- Vader.  However, as unfortunate as it is, they were all just a learning experience for us in our new hobby of chicken raising.  And when life hands you raccoons, you learn… boy, do you learn. 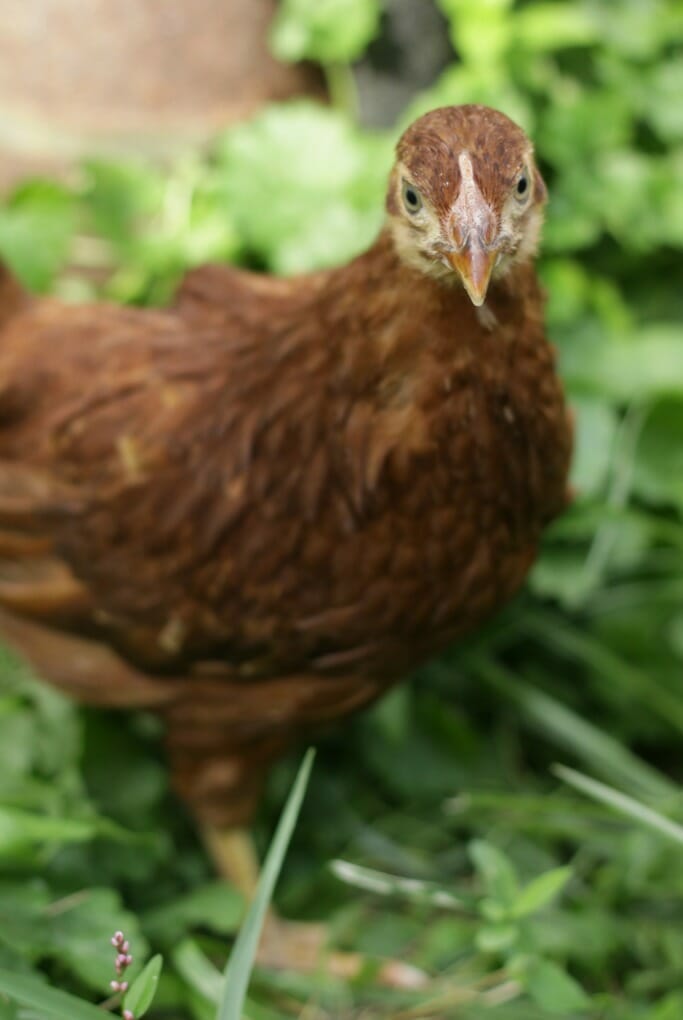 So today I am going to share with you the story of one of the worst weeks I have had in a long time…. it started out on a total high.  We had new chickens and we were all 100% excited about them.  We probably spent too much time with them, holding them, feeding them, petting them.  I was always the person to open up the coop in the morning and let them out, as I am the early bird around here.  All was going well, but Thursday morning, I opened up the coop and was shocked at what I saw.  Two of our hens were dead, and one was gone, totally eaten.  My silkie, Aunt Bee, was injured and shocked.  The three remaining hens were all traumatized- Aunt Bee, Clucky, and Vader.

I screamed and called Chris to come out there.  He handled it better than I, telling me we knew that this was a possibility when we got the chickens.  Yes, we knew- but knowing doesn’t make it any easier.  We assumed that whatever had gotten them had climbed in through the nesting boxes.  We knew that whatever it was had hand-like claws, and killed to kill, and ate only one.  Based on that information, we came to the conclusion that it was a raccoon.  A fox will swipe a hen and take it away to eat.  But coons and weasels will kill for the kill, and typically eat one.  (I have learned all of this over the course of the last month).

Thinking that our nesting boxes needed to be secured, I headed out to the hardware store that morning and got latches with carabiners to secure them.  Emmy helped me get one on each nesting box.  Problem solved!

Throughout the course of the day, Aunt Bee seemed to rally and bounce back as much as she could.  Vader had spent the entire morning snuggling with her.  It was amazing to me how sweet the chickens were to one another in the face of such trauma.  That night as I closed up the coop, I sent up a little prayer that all would be ok.  And thank goodness, Friday morning everything was OK and we thought everything would be fine.

Saturday morning, however, was another story.  I woke to terrible family news that shook me, and then walked out to open up the coop. When the door opened, I was horrified and shocked, and all I could manage to say over and over was, “It’s terrible!  Oh it’s terrible!”  Again, one chicken had been eaten, and two were left for dead.

We investigated the coop and discovered that the raccoon had been creeping in under the eaves of the roof, in the ventilation gap that was supposed to be there according to the coop plans.  We decided to take a week off and then address it and start over.

In the wake of all these events and the bad news we’d received, I became highly creative…. I can’t even tell you how many little crafty projects Emmy and I did.  We spent time together as a family, going out to dinner and the movies, and just being together.  So while it was all a horrible week, I am so thankful to have the support of friends and family who kept me busy and positive.

So now that leads me to where we are today… I had shared my sad chicken news on facebook and it turned out that a friend of mine had a cousin who had ordered too many chicks, and had 5 hens she needed to get rid of.  We made plans to purchase them and picked them up a couple weeks ago.  Before we were scheduled to get them, I spent a hot and steamy Saturday morning in the coop stapling up steel mesh to cover the ventilation gap.  I tested it out from the outside by pushing on it as a raccoon might and was satisfied with my work.  Of course I knew the real test would come soon enough.  Oh, and we also added a little door security.  It’s like chicken prison- no one’s getting in, but no one’s getting out either. 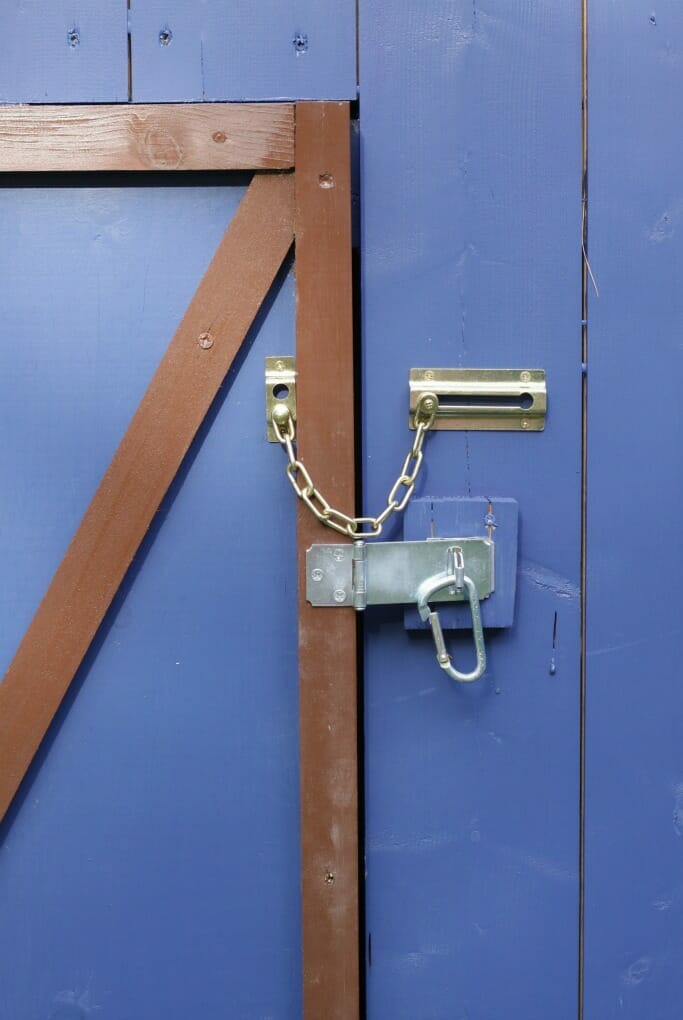 I am happy to report that our new hens are free-ranging their hearts out, eating bugs, feed, and all the scraps we toss them.  They’re well adjusted and friendly.  Emmy named two of them this time, Patches & Friendly; Sawyer named Leia & Ray, and I named Chewy (she’s a little more golden than the others.)  They’re all classic red hens…. 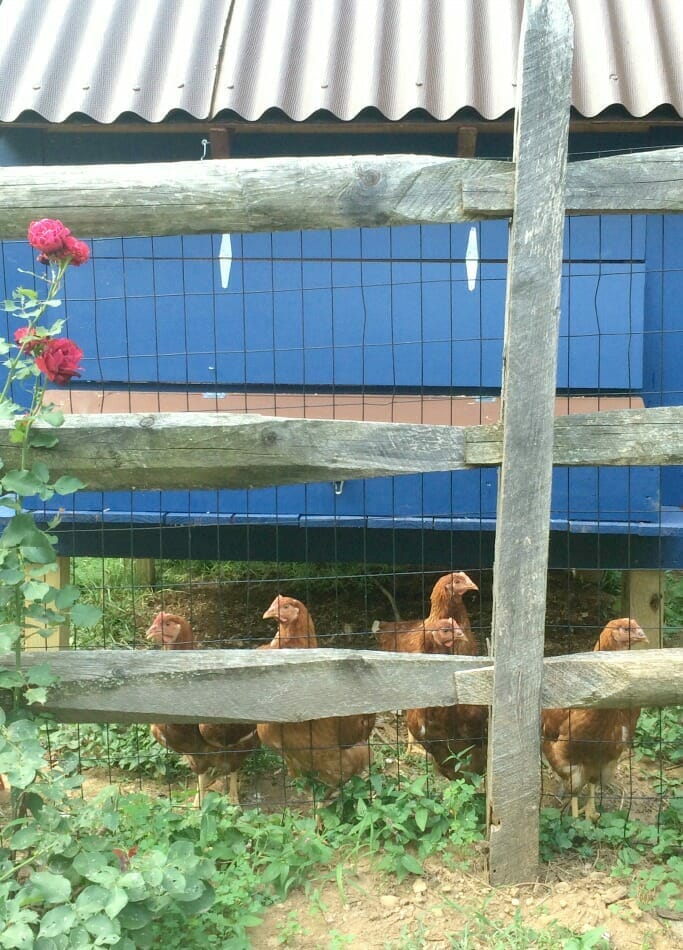 Of course, now I have a much harder time telling them all apart.  When I open the coop on the morning, I generally let out a “Good morning, ladies!” since I don’t always know who’s who. 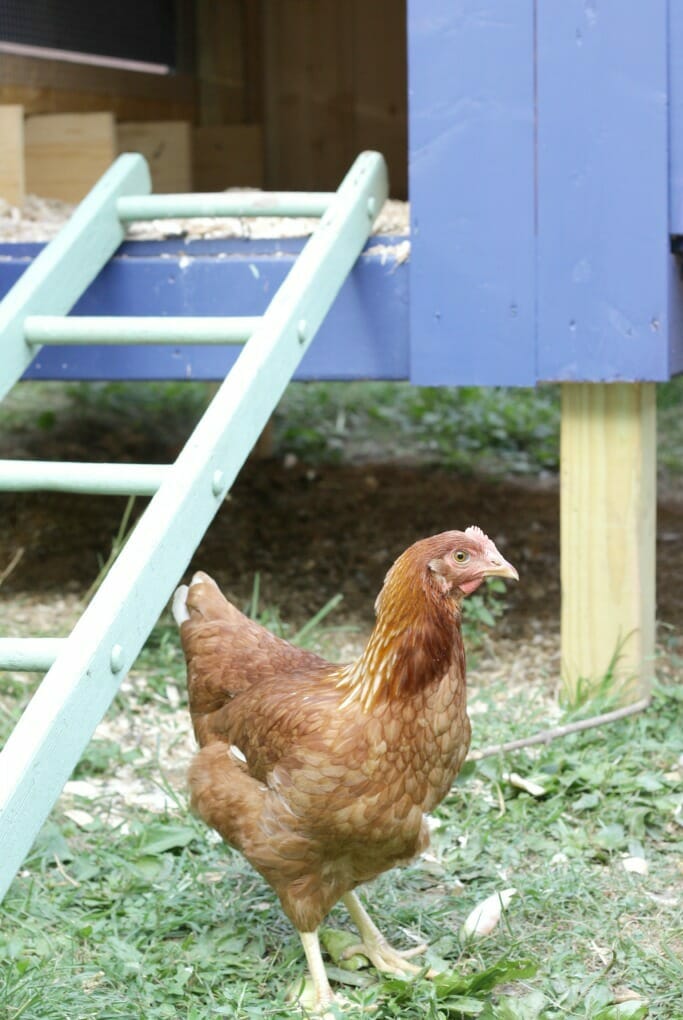 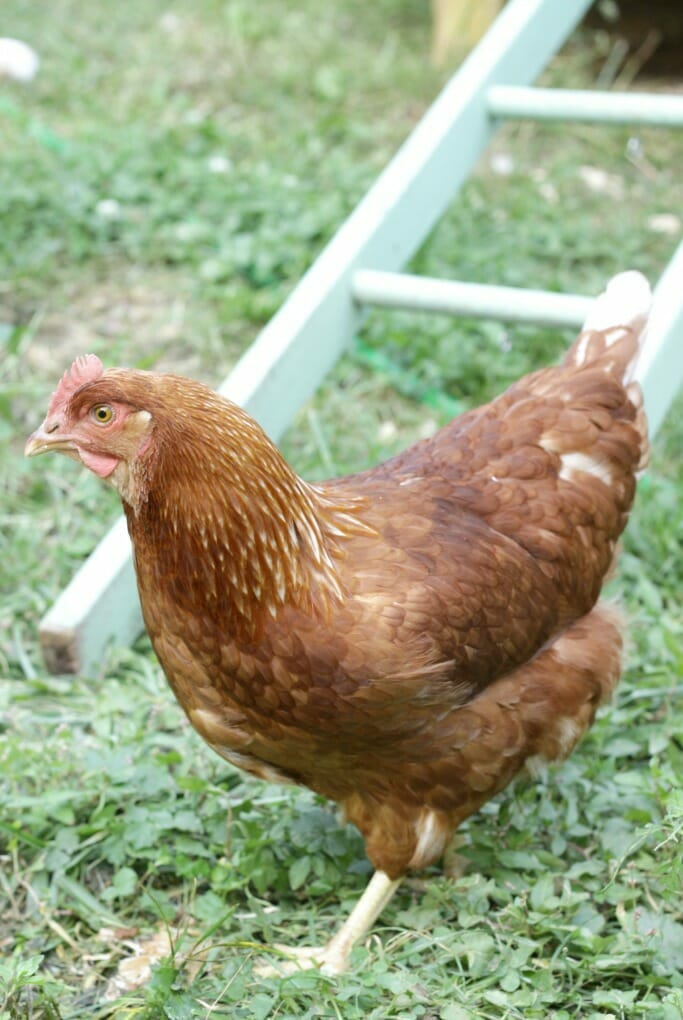 We have a window box liner that we dump scraps in for them, and they love to much on watermelon, corn, bread, and more.  We’ve discovered that pizza is their favorite though- smart birds! 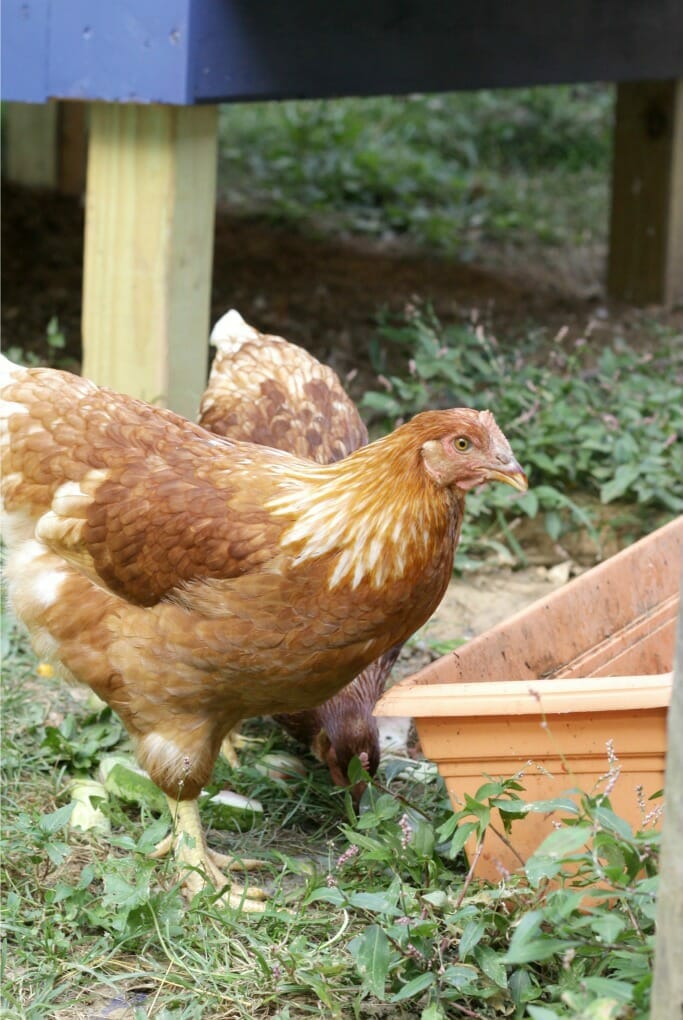 Their feed is in a bucket which has a hole they stick their dead in to eat.  It cracks me up… I mean, this is a hen after my own heart.  Just stick your face right in there and get every last morsel! 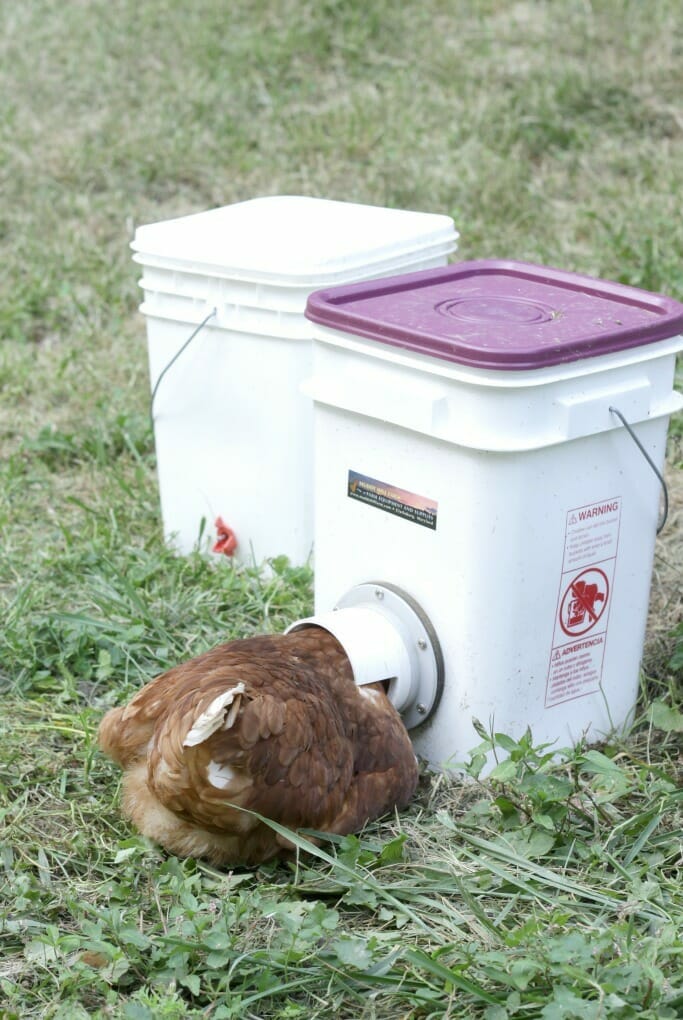 We know that with chickens comes the risk of predators, but we are going to keep doing the best we can to keep these girls safe.  We are also headed back to another poultry swap in a couple weeks and plan to add to our chicken family now that we feel more secure and confident.

Anyhow, I felt that I owed you all an update on what’ been going on here since so many of you were excited right along with me.  And then of course there hadn’t been any mention of the chickens in a while.  Like I said, this was all a learning experience for us.  I am just sad that we had to lose such sweet hens in the process of our education.  But we’re moving onward and upward, and when life hands you coons, you show those coons who rules the roost.