Happy Monday, friends! I hope you have had a wonderful weekend and stayed dry.  It rained here off and on, but I took advantage of the breaks by getting outside and walking the dogs, walking the baby, and pounding the pavement for a quick run with my first born, Sawyer.  I have to admit that it’s rather easy for me to find activities to do with Emmy, and Wilder spends so much time with me by nature of being the baby, but I often struggle to find common ground with my eldest.  He’s into video games, soccer, graphic alien movies…  basically typical teenage boy stuff.  A few weeks ago I suggested that he could start running with me or Chris and he was open to it, so yesterday we gave it a go.  I really enjoyed chatting with him, even if he told me a lot about his video games and graphic alien movies. 😉 He graduated from the 8th grade last week after what was admittedly a year full of challenges and changes, and it’s time for him to have a more grown up bedroom that suits his personality.  I began putting a plan together and then ran it all by him so that he could make changes and weigh in on colors, art, and rug choices.  Today I want to share with you our modern teen boy bedroom plans that we are hoping to put into action this summer so that he has a chic and masculine retreat from the stress of high school. (This post contains affiliate links.) 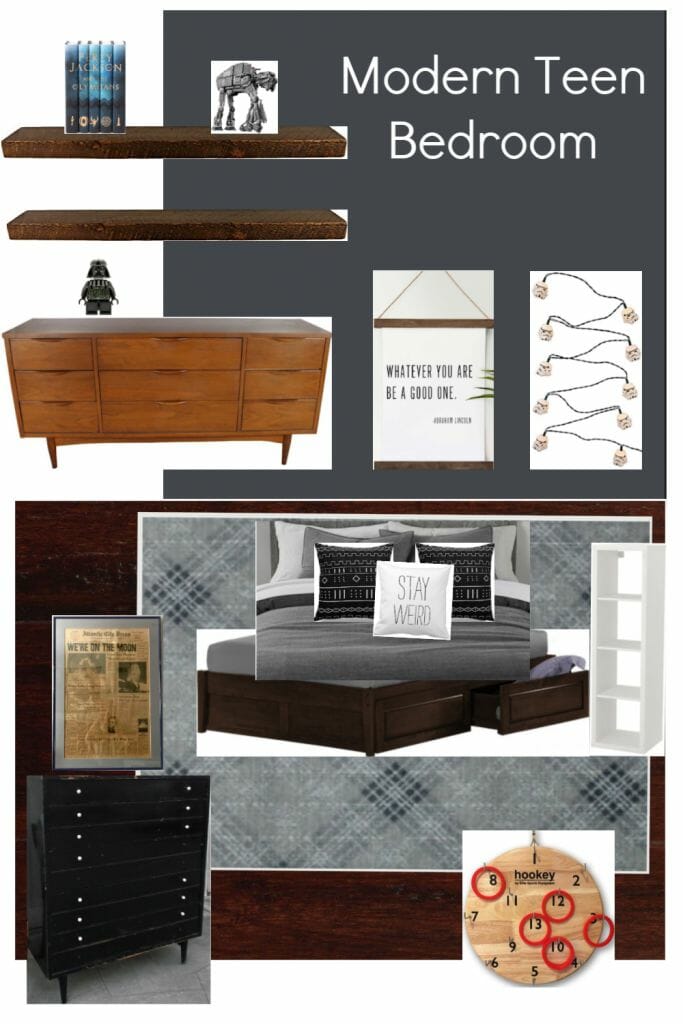 He wanted gray, black, white, and wood, so that is the basis of our design.  The number one request he had was storage for all of his assembled legs as well as more storage in general.  I am going to discuss each element in the plan below.

With his color palette in mind, I set out to find him a new duvet cover and shams.  This one from PB Teen was a great choice because it has that vintage washed vibe and it’s organic which is always a plus. It’s a little darker in person than it looks on line, but I really love the fabric.  (And thanks to my parents for gifting this to Sawyer!)

The second large item to find was a new rug.  I wanted to choose the bedding and rug prior to choosing the paint color because it’s much easier to pick a paint color that goes with a rug and bedding than it is to find a rug and bedding that go with a paint color.  We perused the Mohawk Home site and loved the Russell Plaid in Grey. It has a nice masculine vibe and I have always been a fan of plaid!  Sawyer actually liked another one that was a bit shaggier, but we’re hoping to add a storage bed which might struggle over a higher pile rug.

After those textiles were chosen, I was able to hone in on paint.  Sawyer’s requested dark gray or black, but his room has only one small window, so I brought home several paint swatches from the store to show him.  We also decided that painting one wall dark and three walls white would be best.  After looking over the swatches in his room, Sawyer and I agreed that black would be too dark, even on the one wall. We honed in on Sherwin Williams’ Cyberspace and are going to pair it with my favorite white paint. Cyberspace is a beautiful charcoal gray with a hint of blue, and to be honest, the name seemed perfect for a Sawyer space.

That brings me to the bed!  Sawyer currently has a very nice queen sized mattress on a very not so nice basic metal bed frame.  When I asked him about downsizing to a full to make more space in his room, the answer was NO.  My kid is one of the smallest in his grade, yet he wants the luxury of a giant bed to himself. However, when I showed him this option of a storage bed, the answer was a huge yes.  It comes in several finishes, but he liked the cappuccino best.  He prefers not to have a headboard, so this platform storage bed is a great choice for him.

When it comes to furniture, we’re working with a long low midcentury dresser we already had similar to the one pictured, a black naturally distressed tall midcentury dresser I found on facebook marketplace after we moved (similar to this one), and an ikea kallax we already had as well.  The tall dresser stores his lego pieces, the low dresser holds his clothing, and the kallax serves as home for his books and some knick knacks.  He actually has the two tiered kallax but I used the smaller one in this image to fit it better.  We also plan to add some shelving above his dresser to store his trophies and display his many constructed legos.

Now let’s talk about the fun stuff… the accessories!

Sawyer already had this “Stay Weird” pillow and still loves it, as do I, so it stays.  I was relieved that he wanted to keep it, because I definitely hope my children always embrace their individuality and weirdness and let it show! (PS- it’s under $10!) He requested black and white pillows in addition to his stay weird, and he loved these when I showed them to him.

Several of the items we’re using Sawyer already owned, such as these storm trooper string lights, an original framed Man on the Moon Newspaper, and the Darth Vader alarm clock. The Percy Jackson book set is ridiculously expensive and he actually has Chris’ old set, but they looked lovely so I put them in the board. He just started reading the series after almost finishing off Lowis Lowry’s The Giver series. (He just has book 4 left!)

Over Memorial Day weekend I noticed that Smallwood Home was having a HUGE sale and decided to take a look.  Their canvases are beautiful but a bit more farmhouse than I lean normally.  However, when I spied one with an Abe Lincoln quote I had to show Sawyer who’s a big fan.  He loved it and we ordered it right away!  He kept thanking me for it, which felt really great since my boy is not usually into decor.

Finally, for Christmas Chris and I have Sawyer Hookey which is a fantastic game you just hang on the wall and try to toss rubber rings onto.  It seemed like a great game to play with a friend or even alone in his room.  We’re looking forward to finally hanging that up.

Now I want to show you the space we are working with.  I took these photos yesterday morning and the room is completely unstaged and just a regular teenage mess.  Also, I want to mention that the TV is not hooked up at all and won’t be until Sawyer is an all A student.  We just had nowhere to store it, and this way it serves as a reminder to do his best. 😉

Looking into his room from his bathroom: 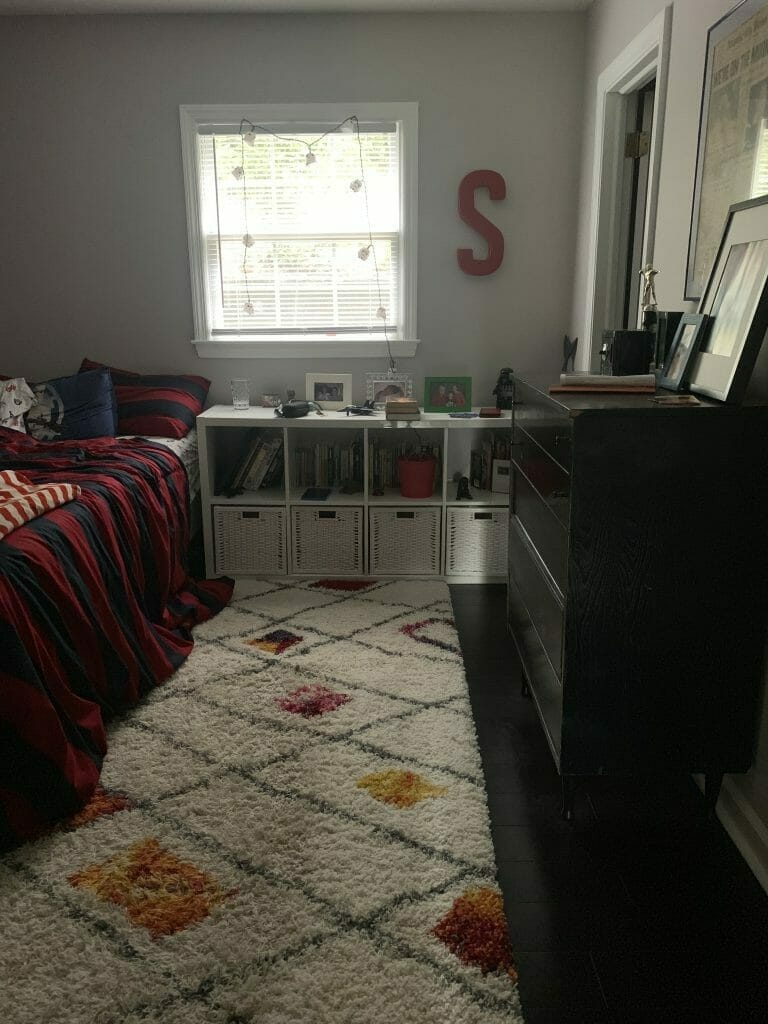 From the doorway to the family room: 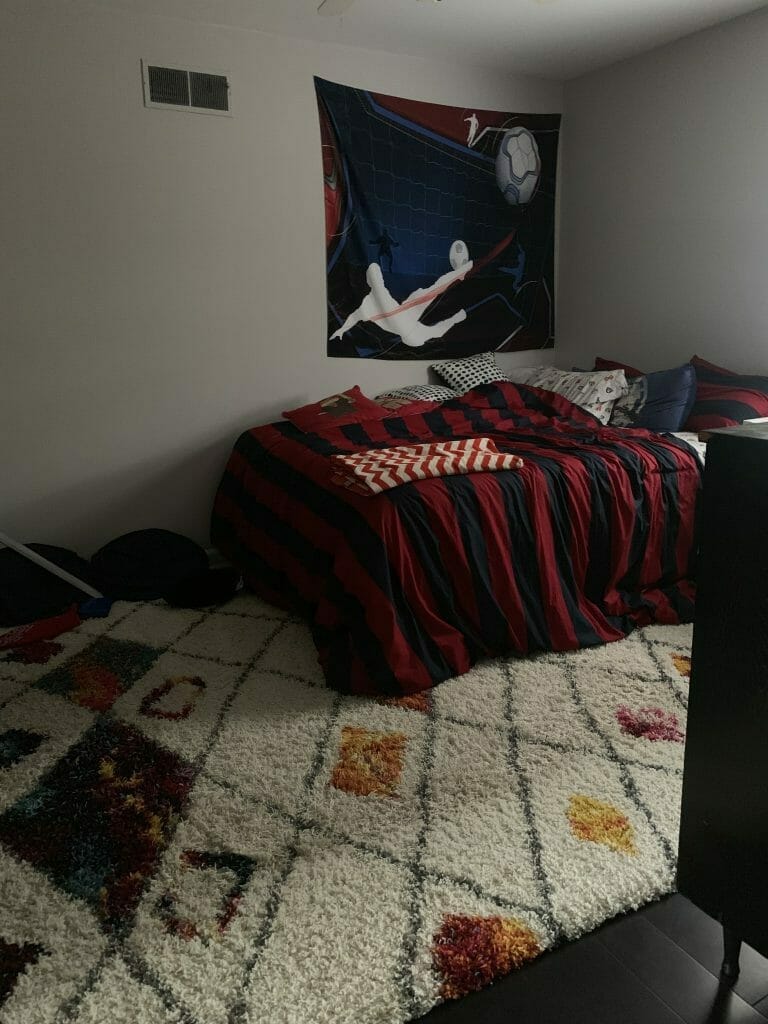 Looking into his bathroom: 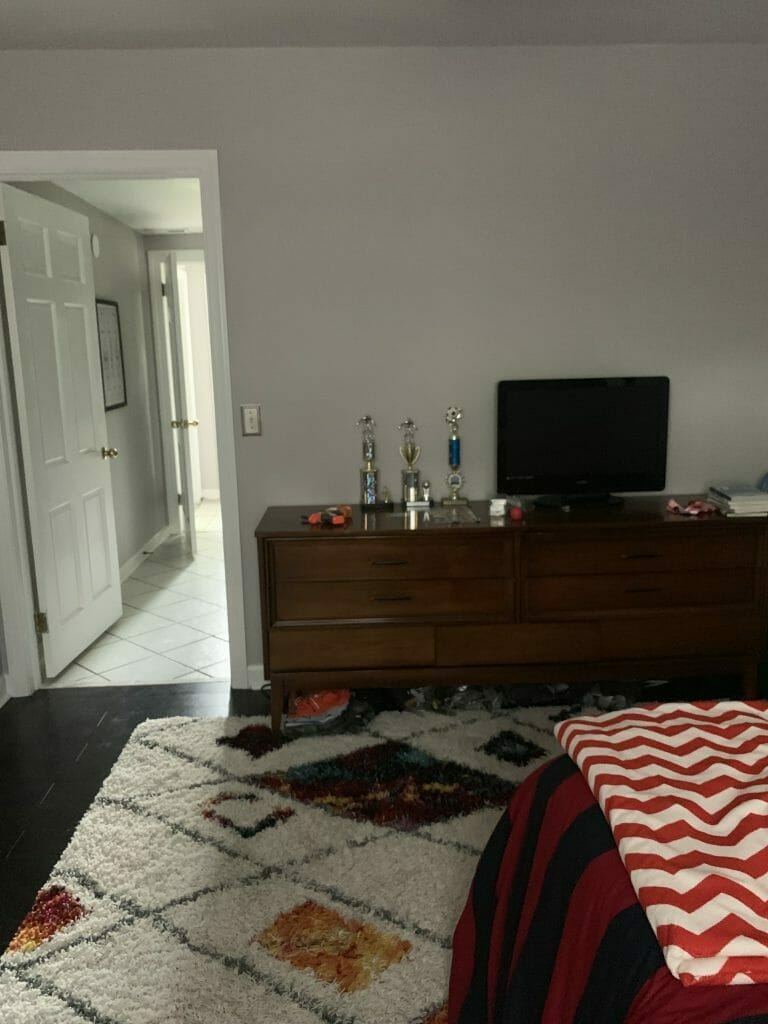 And looking at his closet wall (to the right of his dresser is the family room doorway): 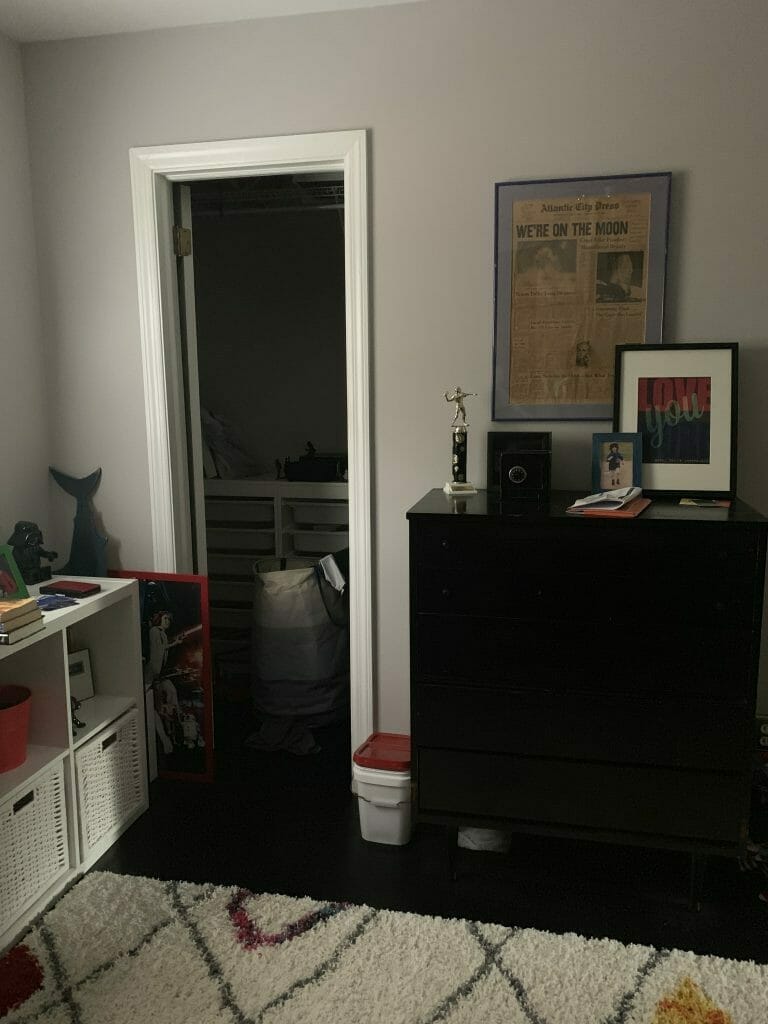 We definitely have our work cut out for us, but we’re excited to make this a space in which he will love to relax.