*This post is in collaboration with Kohl’s & Mohawk.
Exactly two months ago I shared the plans I had for Sawyer’s new tween bedroom.  So let’s just say it’s a good thing I didn’t give myself a deadline on this project because we are slowly and softly making our way through it.  One of the major changes that’s already taken place is the new queen bed, and with this change from two twin beds to one large queen bed, a new area rug was needed.  Sawyer’s requirement was that it be “comfty” (his version of comfy), as he spends a lot of time playing on his floor with legos, pokemon cards, and more.  He actually told me he wanted it to match the bedding he chose and be red or blue, but this mama talked him into a moroccan inspired rug for his room.  (Thank goodness!  I can only take so much red!)  I perused the Kohl’s website for a rug from Mohawk that would fit the bill. 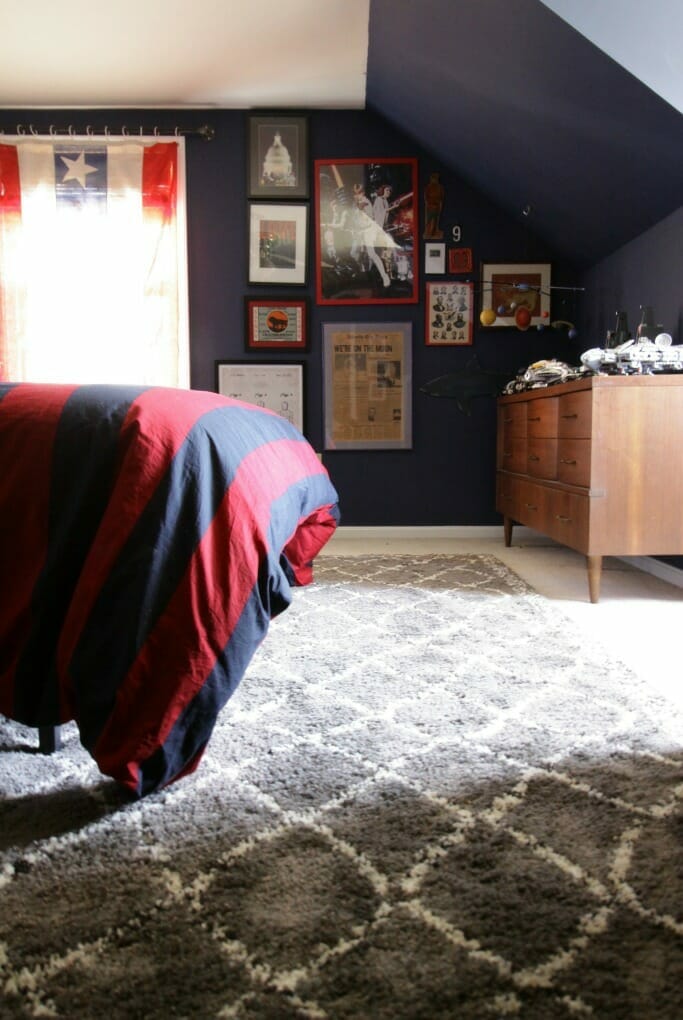 The Fresno Geometric rug from Mohawk (available at Kohl’s!) truly was the perfect choice for this space. 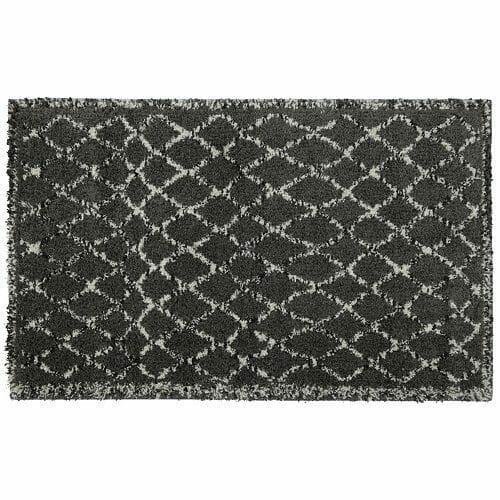 FYI, it is listed as being “beige” but I took a chance since it looked more gray to me online.  When it arrived it was in fact gray (to my eye) and I was thrilled!  However, they accidentally sent the wrong size to me, and when I informed them they told me I could keep it if I had another place I could use it.  As it just so happens, one of my very good blog friends here in Frederick whose story of miscarriage and grief turned into a story of a whirlwind adoption (she literally found out one week before a baby was to be born that the birth mother was hoping she would adopt it) was in a rush to get things together for a nursery.  I asked my contact if I could pass the rug onto her and they said they’d be thrilled.  So I am so happy that the new bay will have a soft and shaggy rug to roll around on courtesy of Kohl’s and Mohawk! 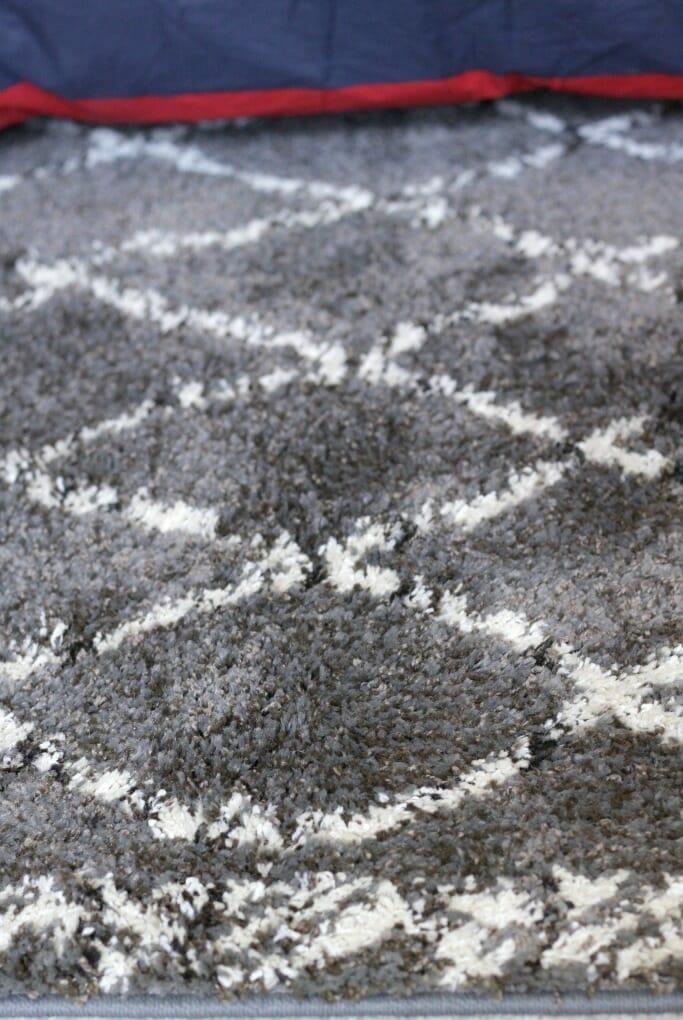 The correct size was sent immediately to me, and I couldn’t wait to get it rolled out.  Of course placing it under a queen sized bed required help from Chris, so I needed to at least wait for him to get home.  One morning before he headed off to work, and after the kids had made it to school, we unwrapped it and rolled it out.  I was thrilled! 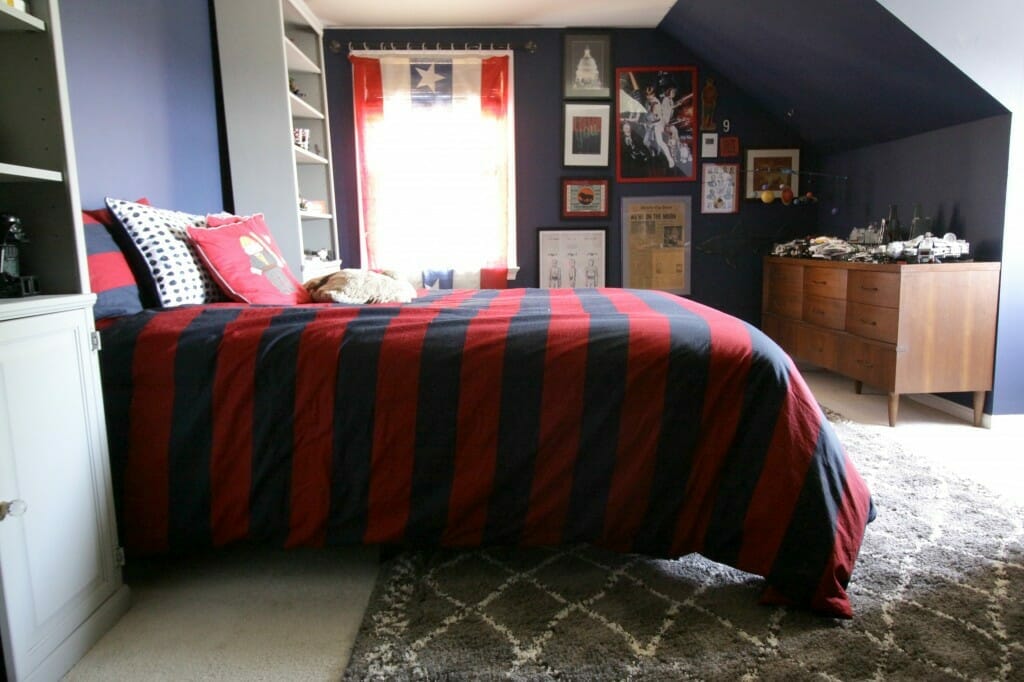 This rug gives the room a more grown up feel, and works well with Sawyer’s mix of decor.  And by decor I mean legos, which is what is all over the tops of his dressers, and even on his bookcases.  See that midcentury dresser… covered with legos. 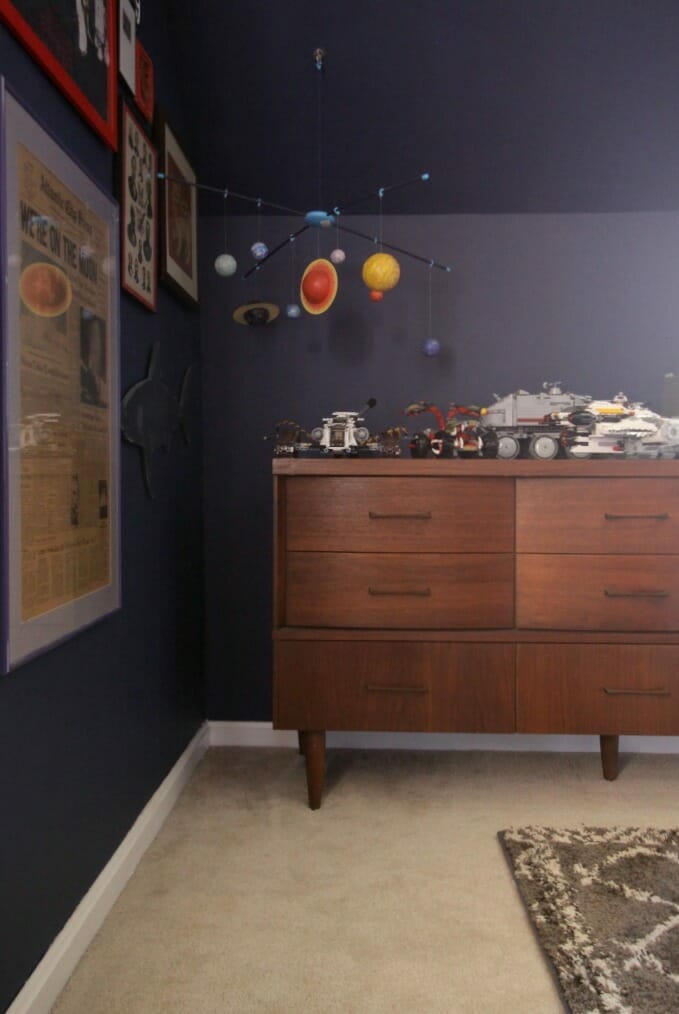 And there is another longer dresser on the other side of the alcove equally covered in legos. See?  (And that hideous ceiling fan will be outta here very soon, too!) 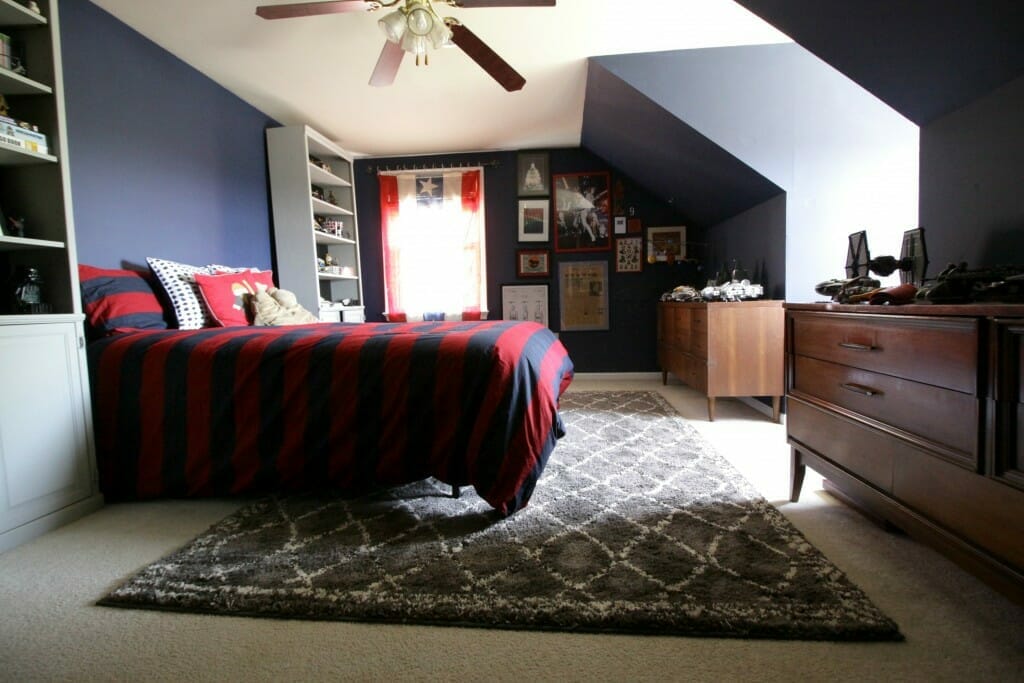 Sawyer was also content that the rug was gray like his bookcases.  The kid likes to match… he’ll learn it’s all about mixing. 😉 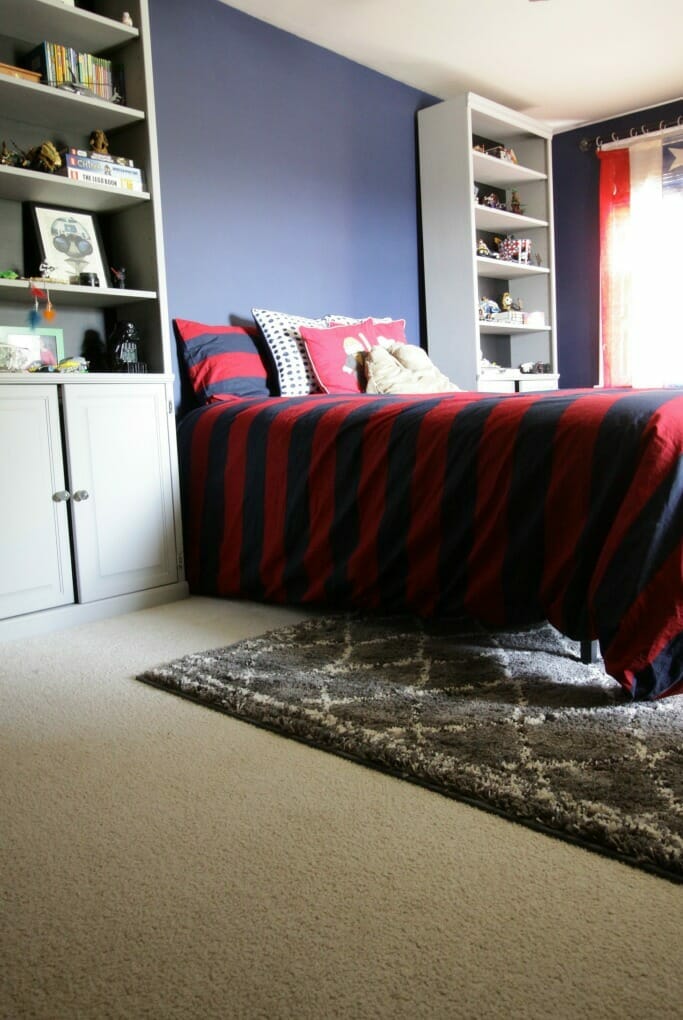 We still have so much to do in this space.  The flag used to sit behind his bed, but I moved it over to act as a curtain for the moment. I think it shall stay but I am not positive.  We have his headboard in our storage so that will be added soon.  The biggest project is going to be making these bookcases have the look of built ins, but it will also have the most dramatic impact.  Currently the bookcase backing is black, but I am thinking that needs a little revamp as well.  Thoughts? 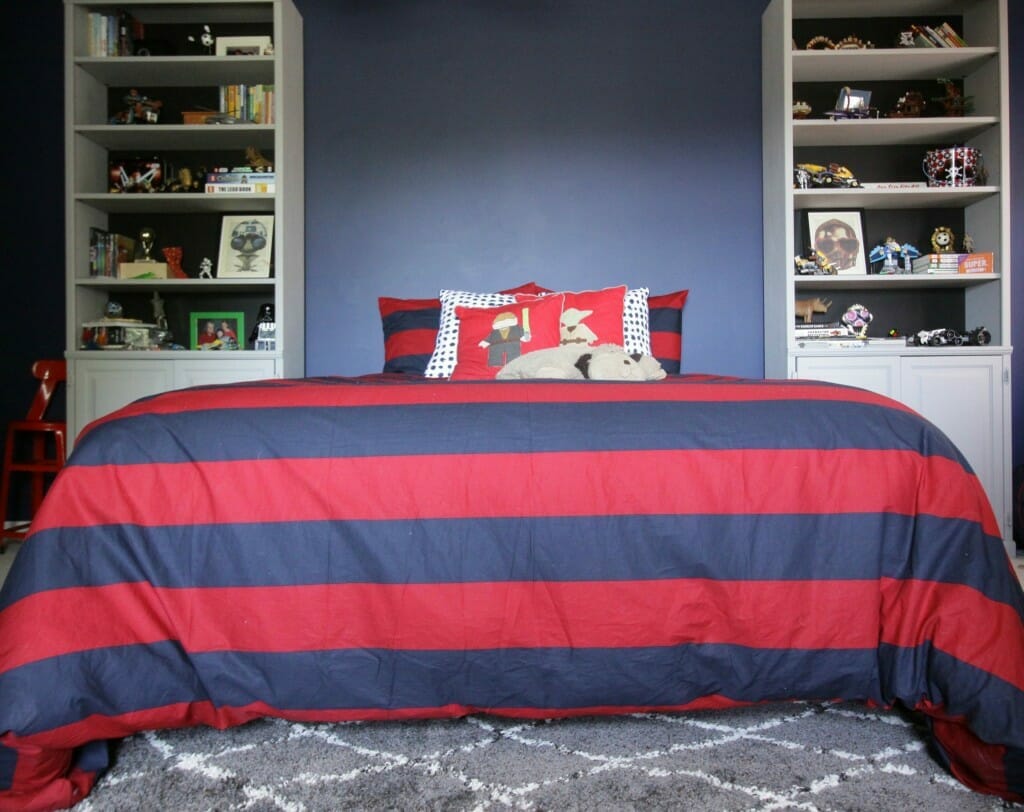 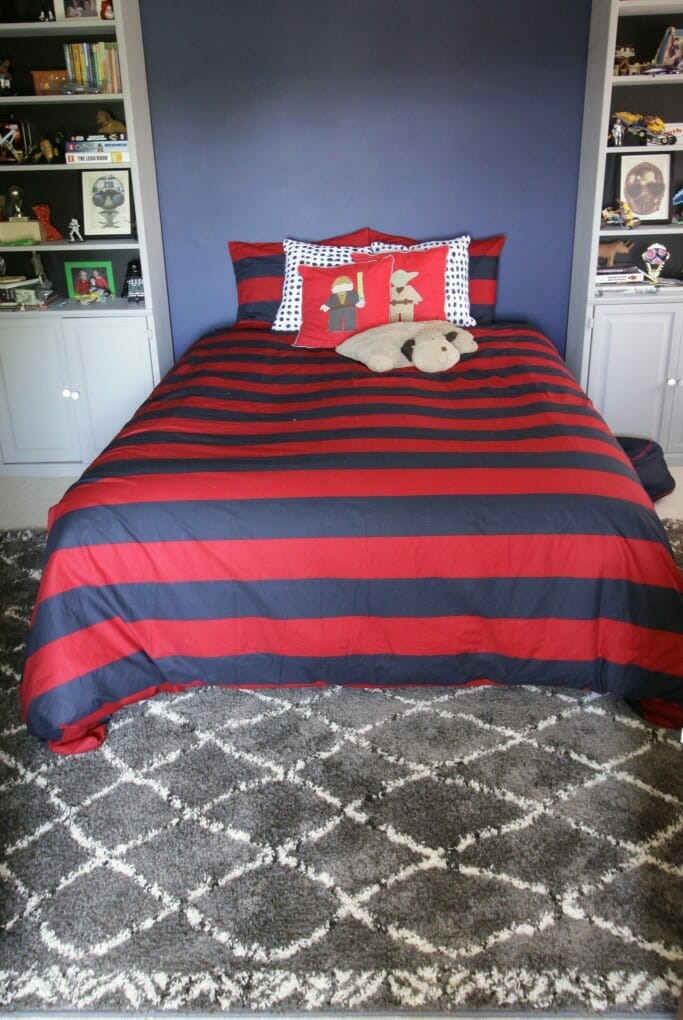 Even though there is still much to be done, we are all thrilled with the progress!  Painting, bedding, and now rug (thanks to Kohl’s and Mohawk taken care of!  And Sawyer has given the rug his playable seal of approval.  He and Emmy already had a sleepover on it one night, and it passed that test with flying colors! 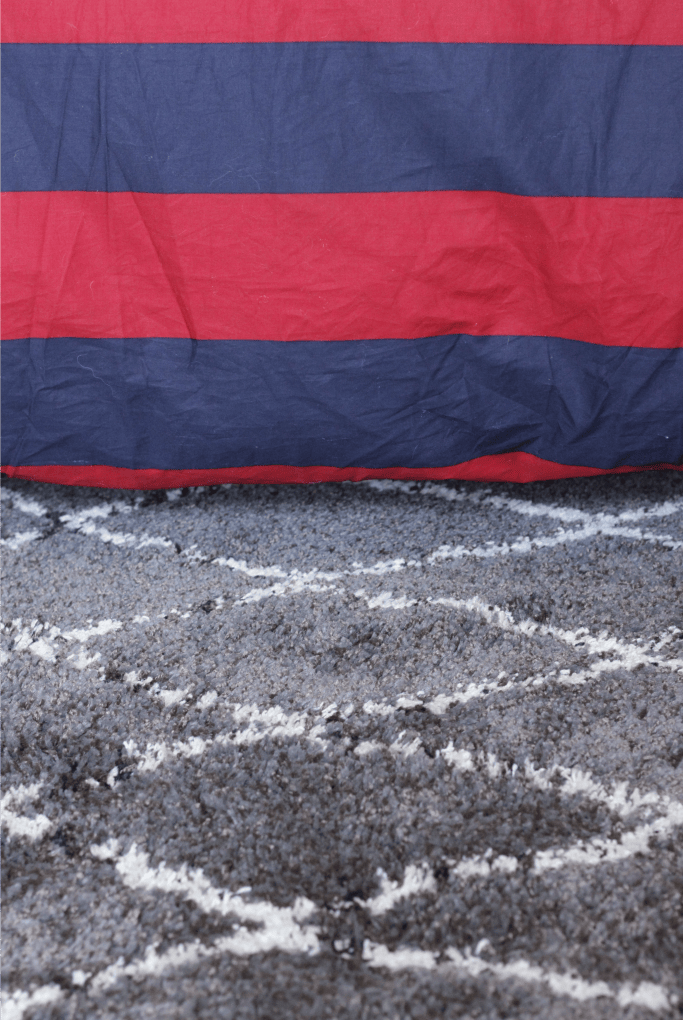 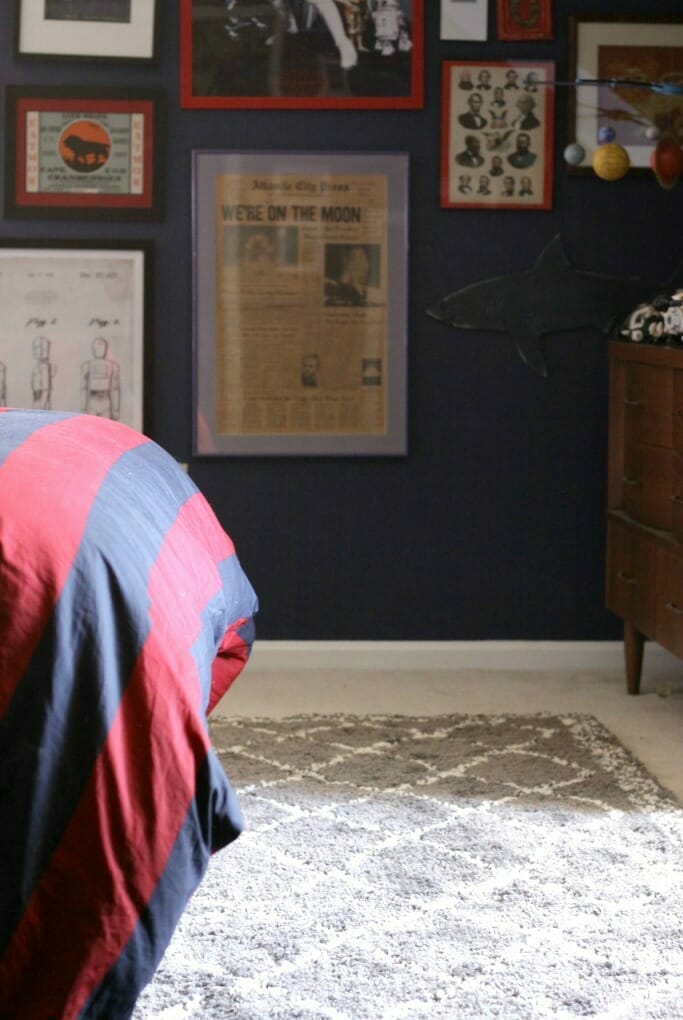 Still to be done… built ins, ceiling fan/light replacement, new desk nook, sconces hung, headboard added… so I am hoping at the rate we are going to have it all done by the time he starts 6th grade in August.

Thank you to Kohl’s & Mohawk for providing me with a rug for this post.  I was not otherwise compensated and all opinions are my own.