It is officially the last day of February!  I can’t believe March begins tomorrow, and we are less than a month away from the official kick off to Spring.  It also means we are getting closer and closer to meeting our baby boy… just about 10.5 weeks away now if he is on time!  To be honest, I am hoping he comes 2 weeks early.  I don’t remember if I have mentioned that, but I am due the second night of the elementary school play and of course Emmy has a big part.  I am hoping he comes a little early so I can come to the play with a newborn rather than be at the play fearing my water breaking on the auditorium floor…. although that would make for a story.  Anyhow, with just over 10 weeks to go, we’ve been chipping away at the nursery progress.  Wallpaper for the closet is ordered, we’re waiting for a good promotion to pull the trigger on the crib and I’ve got a couple of new elements to share with you today, a big comfy leather chair and a gorgeous handmade felt mobile.

Let’s start with the chair, because it’s a got a pretty good story to go with it. (Also, I will link sources below photos for you, and some of these will be affiliate links). 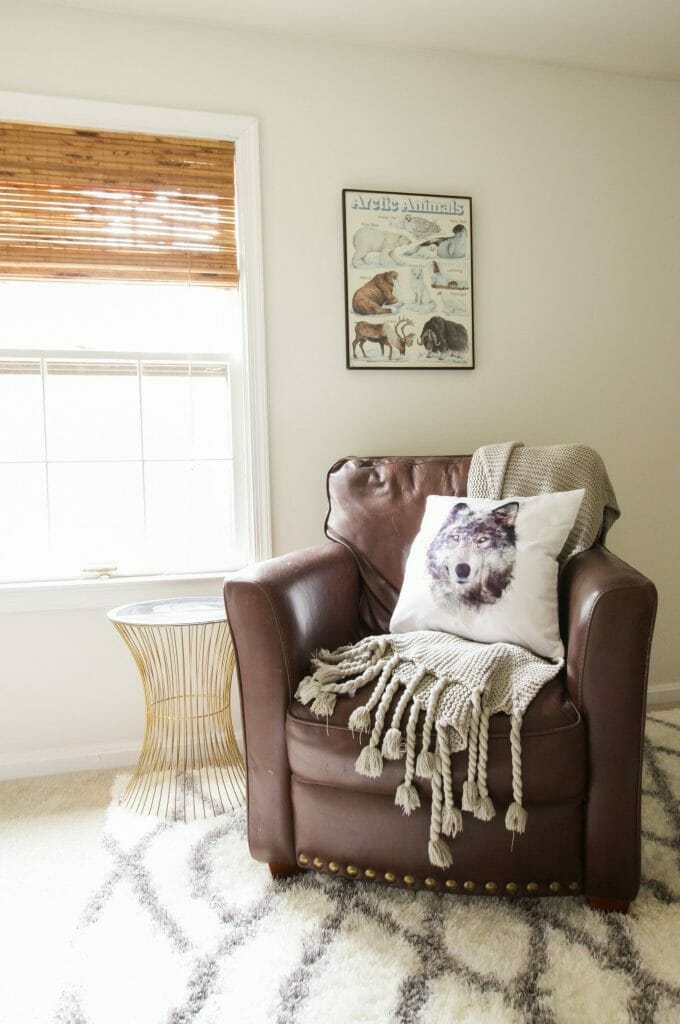 Last fall I answered a craigslist ad for a dresser and desk.  When I arrived at the old farmhouse, I was blown away with the style and ended up talking to the homeowner extensively.  He was a musician and had an awesome collection of modern abstract paintings on his log walls… I was an immediate fan of his eclectic mix.  We loaded up the dresser and desk and he casually mentioned he had a leather chair as well that I could have.  I decided to take it and had visions of using it in my space at Sweet Clover at Christmas time by a tree.  However, we soon found out we were having a boy, and I decided that this chair would be perfect in the nursery; it’s big and comfy and just the thing I’d love to crash in as I nurse the baby in the wee hours of the night.  We stashed it in the garage for when we were ready.

The time came in January and we were ready to get it into the house and up the stairs and into the nursery, mind you we have a smallish Cape Cod with a small entry and foyer and not a wide staircase.  My parents were here for the day, so Chris and my dad carried the chair up the stairs, and even they had a hard time squeezing it up there.  My dad didn’t want to know the se of the baby (he knows now because my mom slipped- oops!), so I told him to leave it at the top of the stairs and Chris and I would get it from there because if he walked into the room he’d know.  Chris waited at the top of the stairs with the chair and I got there and he just said, ” This isn’t going to fit.”  I said, “It is going to fit.”  This conversation went on for a few minutes with him just insisting there was NO way for it to happen.  I said, well, I was planning on putting it on its side and swiveling it in, but I didn’t take into account that there is a wall on either side of the door in the hallway… let me think.”

Here you can see that the door literally is at the end of the hall with wall on either side so no space for swiveling.  The door frame to the left that you can see is the entry to the kids vanity of the Jack and Jill bathroom. 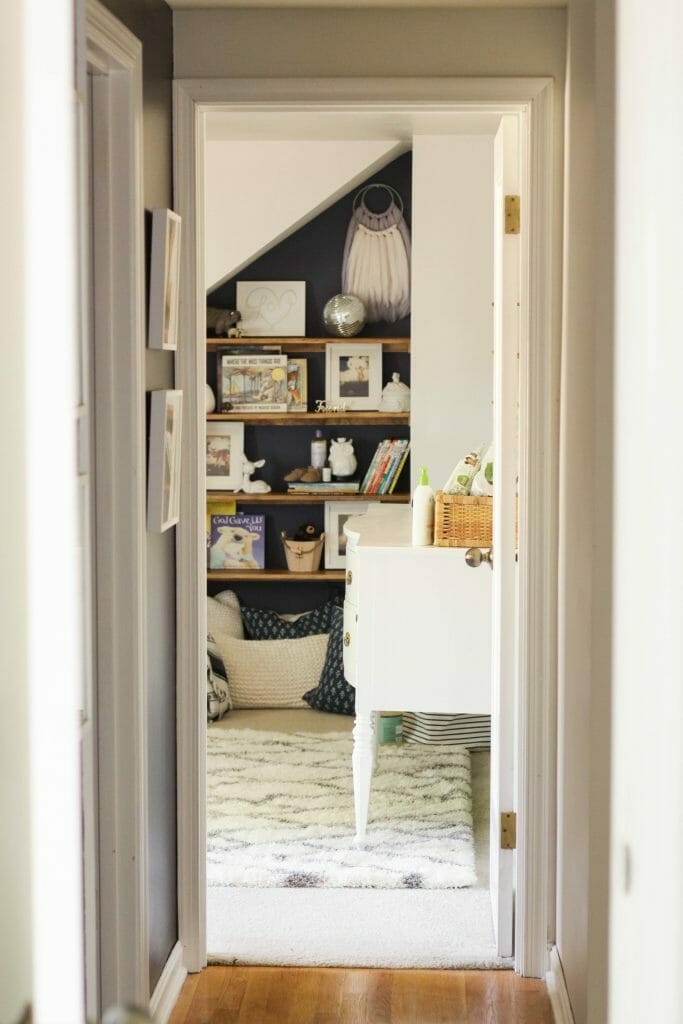 I ignored Chris and his naysaying and tipped the chair on it side anyhow, and said, “Well, this is what I had been thinking… ”

As luck would have it the size of the chair worked so it was able to swivel a bit into the entry to the kids bath, and then spin and just barely eke itself through the nursery door.  The entire time I was moving the chair, Chris was repeating, “It’s not going to fit.”

Once it made it into the room, I shouted triumphantly, “Ha!” I said, “That, ‘ha’ is not a ‘Ha, it worked,’ but rather a ‘Ha, I was right so take that!'” Yep, I am not ashamed that I became pretty competitive when it came to proving him wrong and fitting it through the doorway.  Gloating ensued, but he graciously admitted that he had been wrong because that’s how good marriages work. 😉

Here you can see it in the room, and the crib will go along that wall with the banner… 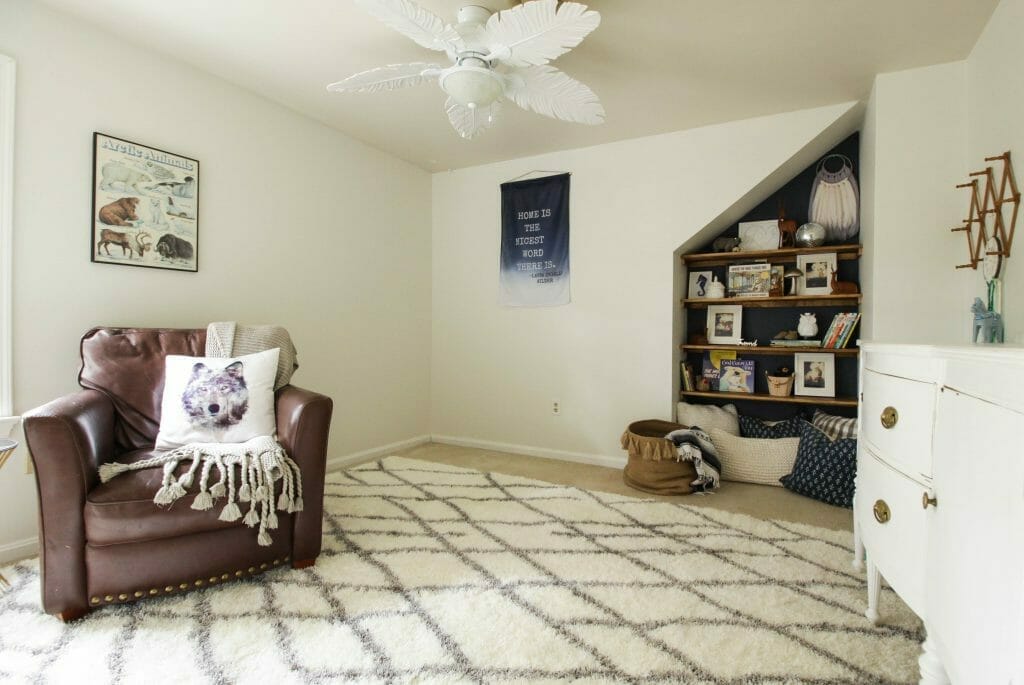 Now I want to show you the latest addition which came after the above photo was taken.  Emmy and I had been pinning away some beautiful and inspiring felt mobiles and we had plans to make one.  However, my instagram friend Gisele (whose home is gorgeous!) told me that she made felt mobiles, so I checked out her shop and was blown away!  She has the most adorable designs, and has a great selection of eclectic, whimsical, and boho baby mobiles.  Gisele told me she would love to give us one and let me choose.

When it came time to selecting one, I was so torn as there were what felt like a million that I loved.  In the end, I decided to let my kids weigh in and we collectively chose a dinosaur with stars.  It was a close one though as there were so many woodland animals I loved, cacti, unicorns and dragons… the options were endless!  I’ve mentioned before that Sawyer loved dinosaurs as a toddler and we read every book about them and he knew all of the facts about each kind.  They’re just special to us, and he’s excited to share his passion and knowledge with his little brother.  I haven’t permanently hung it yet as I am going to wait for the crib to be in place, but it will go somewhere around here. 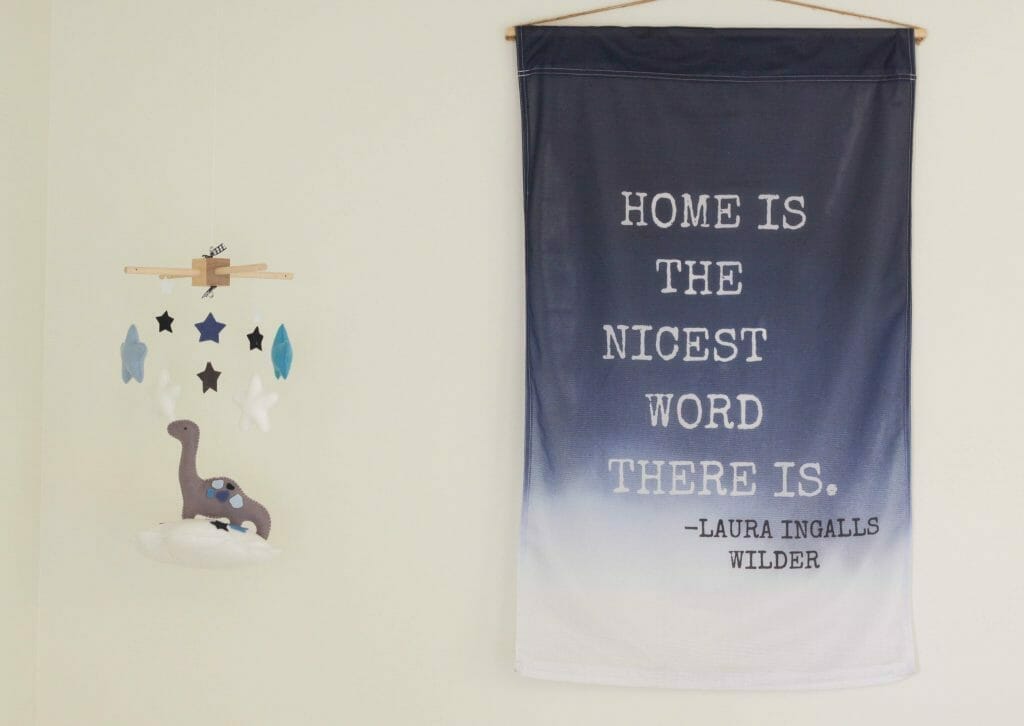 Isn’t this just the most fun mobile?  I love the colors which are perfect for this room. 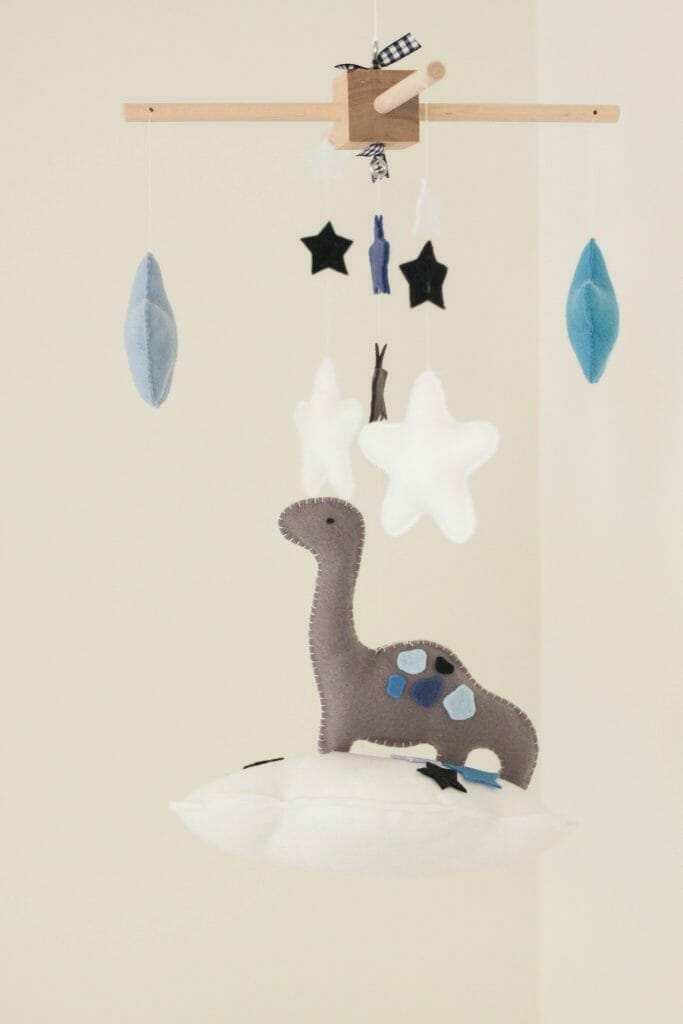 If you can’t tell, the brontosaurus is sitting on a cloud, surrounded by stars. 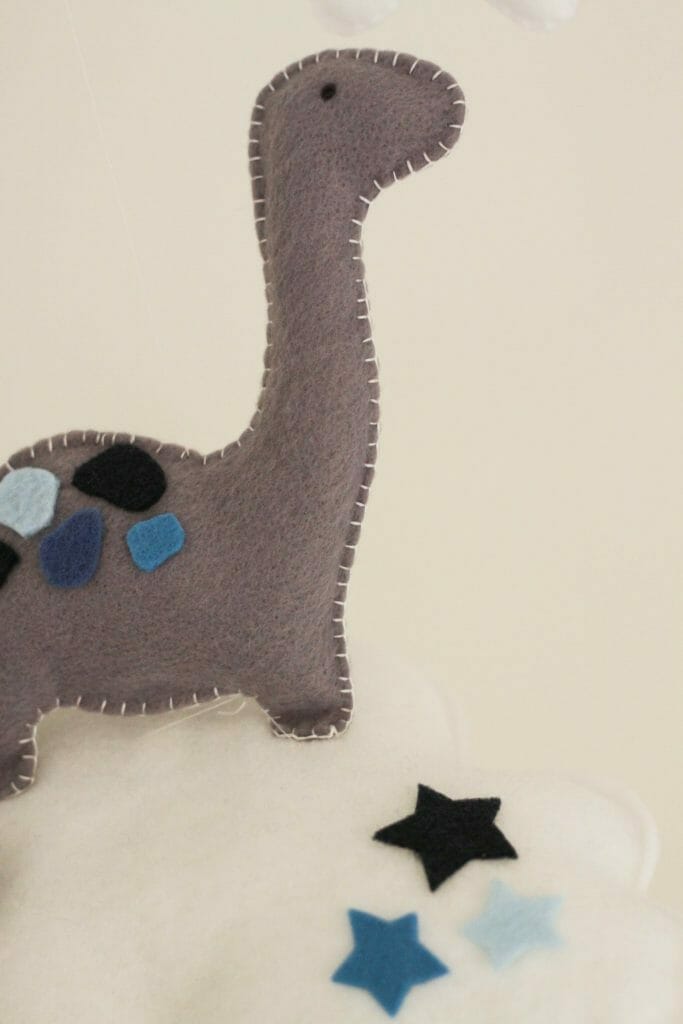 As you can see, slowly but surely, this room is starting to come together, thanks to the kindness of so many wonderful people.  The closet is really going to have a big impact on this space, at least I imagine it will… we’ll see if the results are as magical as they are in my head!

Time to go kick Wednesday’s booty and work on some new furniture projects.  Hope you have an awesome day!