So far in our playroom evolution, I have share with you the map wall, as well as the Provence chairs I saved for it.  However, I was still looking for a table to go with the chairs, so for the time being it had looked like this, the last time we saw it… 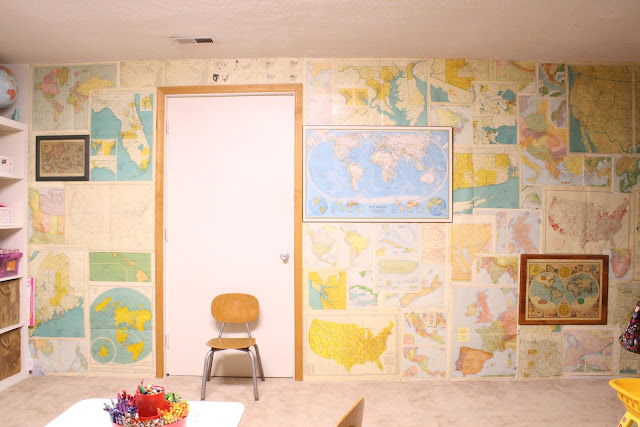 You can sort of see the small child’s size white table there.  Well, the kids are (sniff sniff) growing up, and I thought we would get more use out of an adult sized table and I knew exactly what I wanted- a round antique pedestal table.  I really was hoping for an oak table….. BUT I found a table that otherwise fit the bill and was $20!  Why was it so cheap, you ask?  Well, someone had stuck a vinyl tablecloth with white fuzzy backing on it and the fuzzy backing was stuck ALL OVER the table top.  I did not get a picture of it before…. trust me it looked about the same but with a fuzzy white growth.

I attempted to use goo gone and other cleaners, thinking maybe just humidity had caused it to stick.  But it appeared that the table had once been poly’ed and the tablecloth put on too soon, so the fuzz was pretty much in the poly.  I ended up stripping the entire table top, and giving it a couple fresh coats of poly.  I did not do anything fancy with the top, nor did I refinish the base as this is going in a playroom.  You know, where kids play.  I didn’t want to invest a ton of time and effort into making it so beautiful again that I would be devastated if anything happened to it.  This room is for the kids… I don’t want them to feel like they have to be super careful with it!

I love how it is coming together, but more importantly the kids are thrilled!  Sunday morning I put the table back together in the playroom.  Chris asked Emmy to go get herself some clean pants out of the laundry.  She went down the stairs (with just her shirt on since she was fetching her pants) and I heard her squeal over the new table.  10 minutes later, she had not come back up.

She was so excited about coloring at her new table, that pants just weren’t important anymore!  Anyhow, here is the new table, as well as some other shots around the room…. 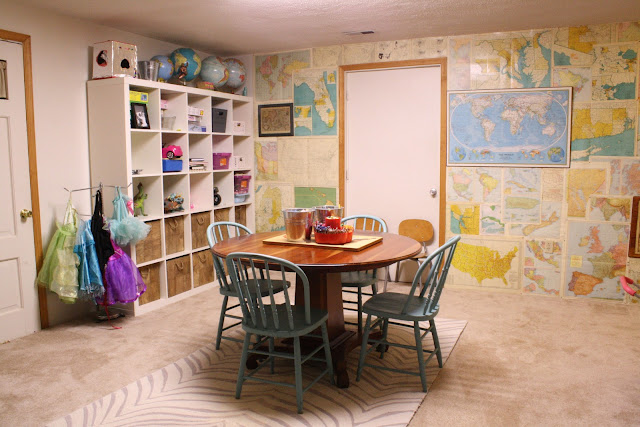 The tin foil box you see in the upper left in the above picture is a robot helmet we made out of a build a bear box.  On the left side of the picture is a vintage chrome swivel stand I got for $5 at a yard sale!  We use it to hang Emmy’s dress up. 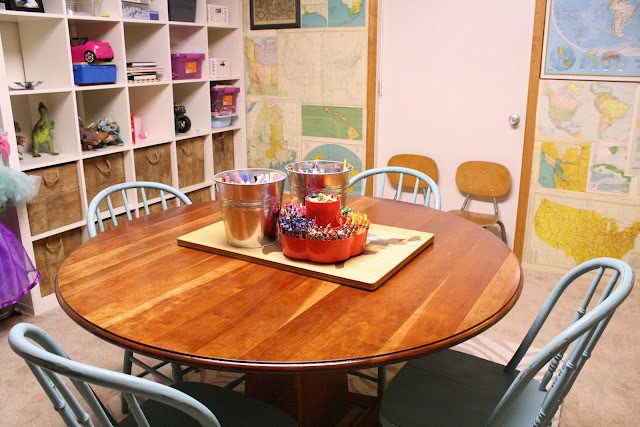 On top of the table we are keeping crayons, markers, and pencils, each in their own container.  Also, there is a wooden USA puzzle that was Chris’ as a kid.  Our kids absolutely love playing with it and learning about the states. 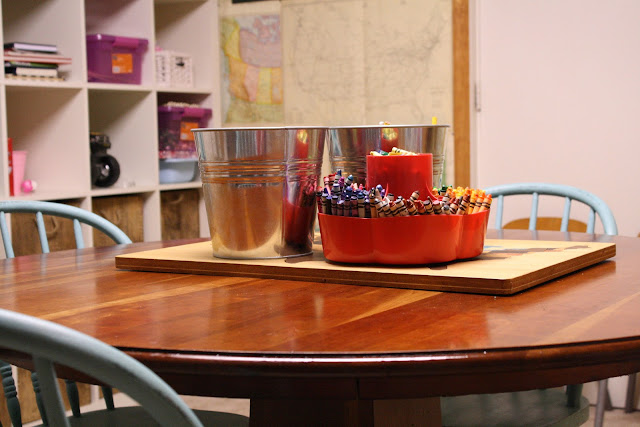 Here is that beautiful table base…. 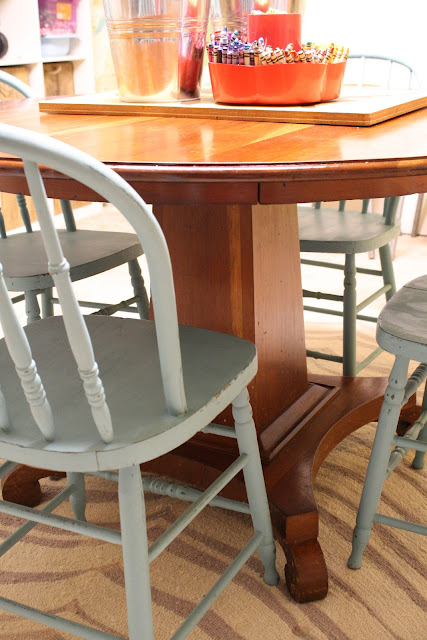 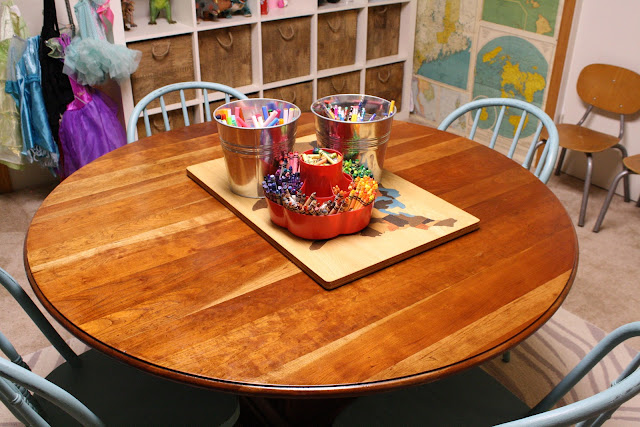 A view of the other side.  You can see we have an awkward door that leads to utilities (not laundry, but oil tank, etc).  And I also have a vintage flea market chalkboard. 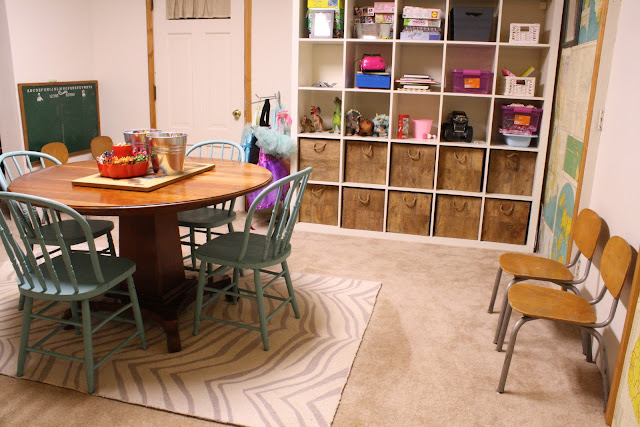 Emmy and her friend decided one day that they should label their chairs with names…. “Emmy, Sawyer, Bella, Mommy”.  We each had our own labeled chair.  I was not happy.  As you can see I haven’e been able to clean off the “Sawyer” chair. 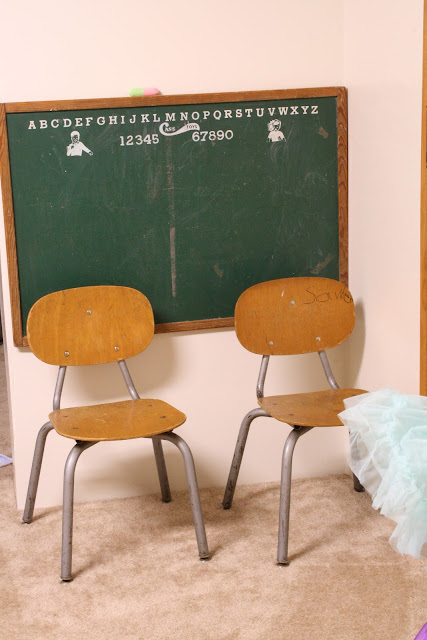 Another shot towards the staircase… I found these vintage comic posters on freecycle and knew Sawyer would love them. 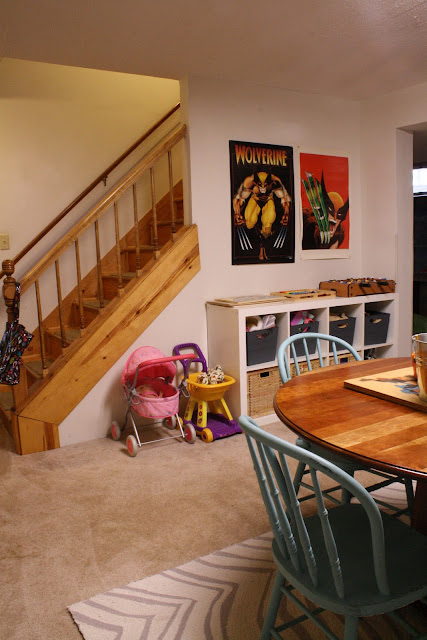 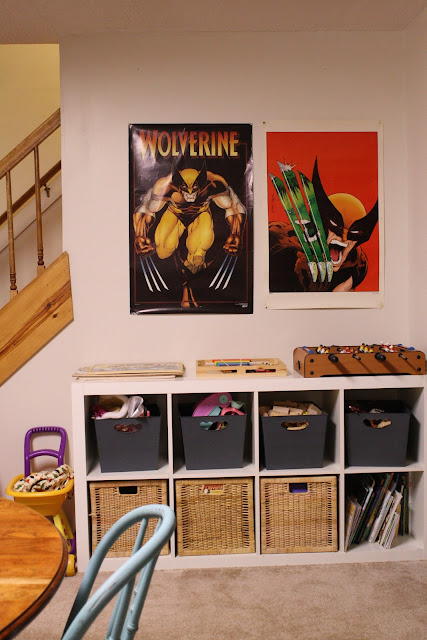 So there you have it!  I finally feel like we are really making progress.  Of course, I have not shown you the entire other half of the room yet…. baby steps.

Pin
Share
Tweet
0 Shares
« POWW 111: A Furniture Link Party
The United States of My Bedroom (a map and some other new additions to the master) »