At the beginning of the year, I set out some simple goals just to expand my culinary horizons a bit and we committed to trying one new recipe a week. Chris and I have truly enjoyed trying new things, but my kids would gladly eat grilled cheese or pizza or bread and cheese or breaded chicken every night of the week.  Basically, I don’t hold their opinion in high regard, but I am going to give you an honest review of each recipe we tried in January and February, listed in order from most to least liked. I am planning to share these posts every couple of months rather than every month to give you several recipes at a time, but I often share them in my Feel Good Friday posts along the way. Tie on that apron, warm up your skillet and let’s get cooking. Or eating. That part definitely comes easier. 😉 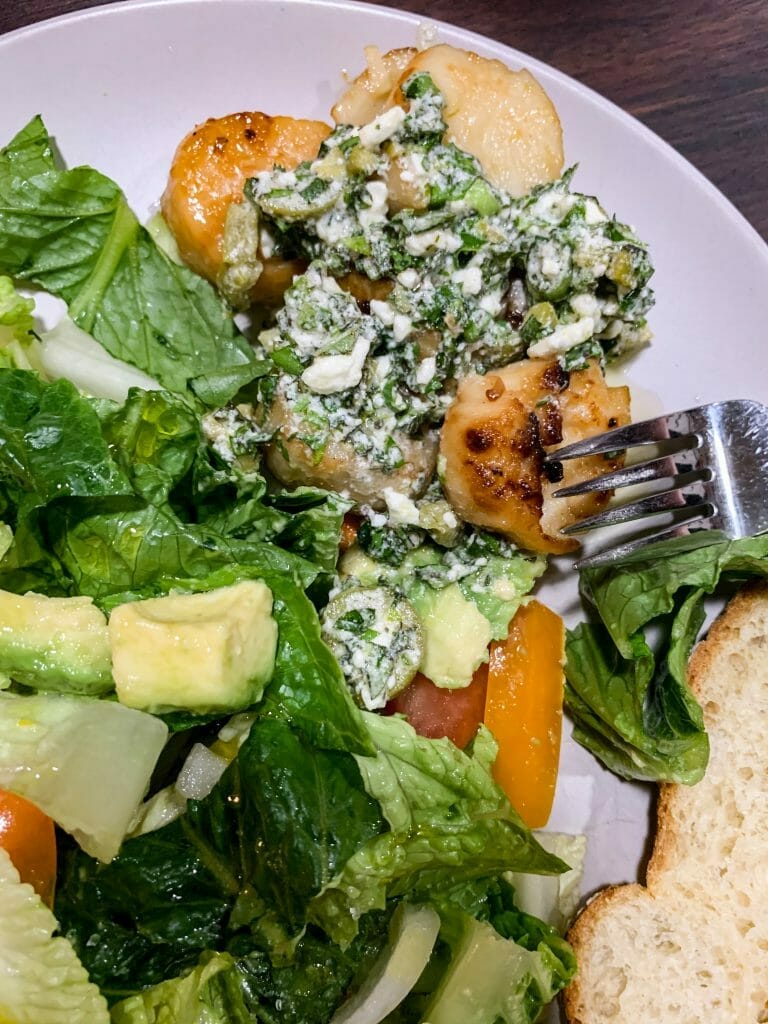 This recipe was hands down our favorite so far this year.  Chris and I always enjoy scallops and we’re big fans of Half-Baked Harvest.  When I came across this recipe and suggested it, Chris was all in.  He made the lemon feta dressing while I worked on sautéing the scallops because team work makes the dinner work (although in our house sometimes leaves to argument, but we take out chances). This dish was surprisingly simple to create and absolutely delicious! We will definitely make it again the next time we have a hankering for scallops.

I love a good crock pot soup in the winter and was excited to try out this recipe. To make it a little healthier, I substituted coconut milk for the heavy cream and it didn’t seem to affect it at all. I will say, this recipe created a lot and we weren’t able to get through it all with the leftovers, but it was delicious.  I am not a huge pasta eater, but there were enough vegetables in it as well that I could eat mostly the liquid and veggies with just a few tortellinis, which Chris ate the opposite. That’s how our marriage works.

I wish I took a photo of these vegan stuffed peppers because they were colorful and lovely to look at, but even better to taste! The recipe gives several options so you can really fill them with whatever veggies and grains you have on hand.  We used onion, peppers and selected quinoa for our grain for a little extra protein punch. When it came to tomatoes, we used a clean no-sugar added spaghetti sauce from Trader Joe’s.  I topped mine with Trader Joe’s vegan cashew mozzarella cheese and used regular mozzarella on Chris’. These were savory and really easy to make and will definitely become a repeat meal around here.  FYI, I cut the recipe in half because it makes a lot!  I made 4 peppers and was thrilled to have two leftover for easy meals throughout the week.

This recipe is more of a cooking hack, but it was new to me so I counted it. In this post, Camille Styles shares an easy way to cook a sweet potato that gives it a little punch of crispy sweetness.  Our potato cooked a lot faster than the recipe said it would, so just a heads up on that. This method of cooking sweet potatoes was rather quick and easy and a great idea for those nights that Chris isn’t home and I don’t feel like doing too much to make dinner.  I topped mine with vegan cheese, but you could really add anything. Next time, I think I may add a little kick of sriracha and vegan cream cheese.

OK, so the only reason this one is farther down on the list is that it just had too much sweet potato in it, even for me.  Otherwise, the flavor was great!  Chris had his over white rice while I used cauliflower rice.  If we make it again, I think I would just replace some of the sweet potato with red pepper and broccoli.  We’ve had a coconut curry with sweet potato and broccoli before that we enjoyed.

I used this crispy tofu recipe to add into a stir fry I was making one night.  The tofu was amazingly crisp and tasted so good that I was popping them like tater tots while cooking the veggies. Chris was supposed to be home but got delayed at work so he reheated his in the microwave when he got home and the tofu was chewy.  It is not intended to be reheated for sure.  That’s the only reason I put it lower on the list.  In the moment, terrific, but later, not so much.  I’d make it again, but only if I knew Chris was going to be on time, and I’d make less and not store it with the stir-fry afterwards.

Sorry Gigi, it wasn’t you . . . it was me.  I used vanilla unsweetened almond milk because that’s what I had and it added a very, um, interesting flavor to this vegan pasta dish. I will definitely make this one again, but first I will stock my refrigerator with non-flavored unsweetened nut milk. Then, I think, we’ll really be on to something.

This vanilla sheet cake was SO sweet – too sweet for me.  However, between Wilder and Emmy, we had somewhat of a winner.  Wilder preferred the overly sweet icing (and I actually used less sugar than it called for!) and Emmy preferred the vanilla cake part.  It was OK, but I typically like to venture into healthier sweet-baking.  Wilder had wanted cake and I didn’t feel like making a full on cake, so for what it was, it was decent. Next time he wants cake, I’ll probably try a different recipe.  Or make muffins and tell him they’re cupcakes. 😉

I’ve never made baked oatmeal and have always wanted to try it.  Last week, Chris was away, so I told the kids I was making breakfast for dinner and made this healthy baked oatmeal without the optional icing.  I liked it, Emmy tolerated it and said she’d like it with the icing, Wilder liked it at first then changed his mind and Sawyer took one bite, then looked at me like he was about to throw up. It’s safe to say, I won’t be making it again because I’m the only person eating it here and I don’t love it enough to make it again just for myself.  I do love oatmeal in a bowl, so perhaps I should just stick to that. Or maybe I will try again and make the icing for the kids. 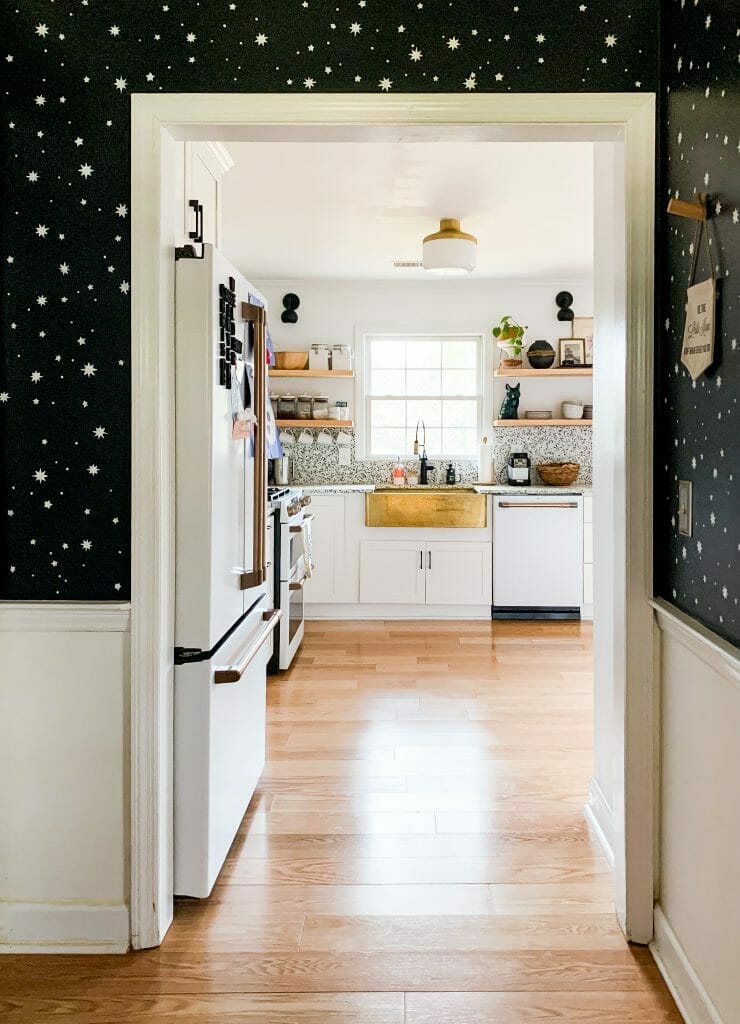 Yes, there’s still one more week of February left, but I wasn’t sure if I would have time to sit down and put this post together again, so I’ll just add another recipe to the next recap. 😉 Which recipe do you think you’ll try?  And do you have anything you think I should give a whirl?  Drop me a comment with a link – I’d love to see what you’ve got. (Pescatarian/vegan/vegetarian only.)