Let’s talk about food baby, let’s talk about recipes, let’s talk about all the good things and the bad things we can eat, let’s talk about food. May and June were definitely crazytown around here with a stomach bug ripping through our house in May and then RSV the last couple of weeks of June. Hopefully, we’re all on the mend now and can get one with our normal lives. OK, semi-normal. We did manage to get in a new recipe every week but the one with the stomach bug so today I’ve got 15 recipes – and my honest thoughts about each – to share with you. Ready, set, cook! 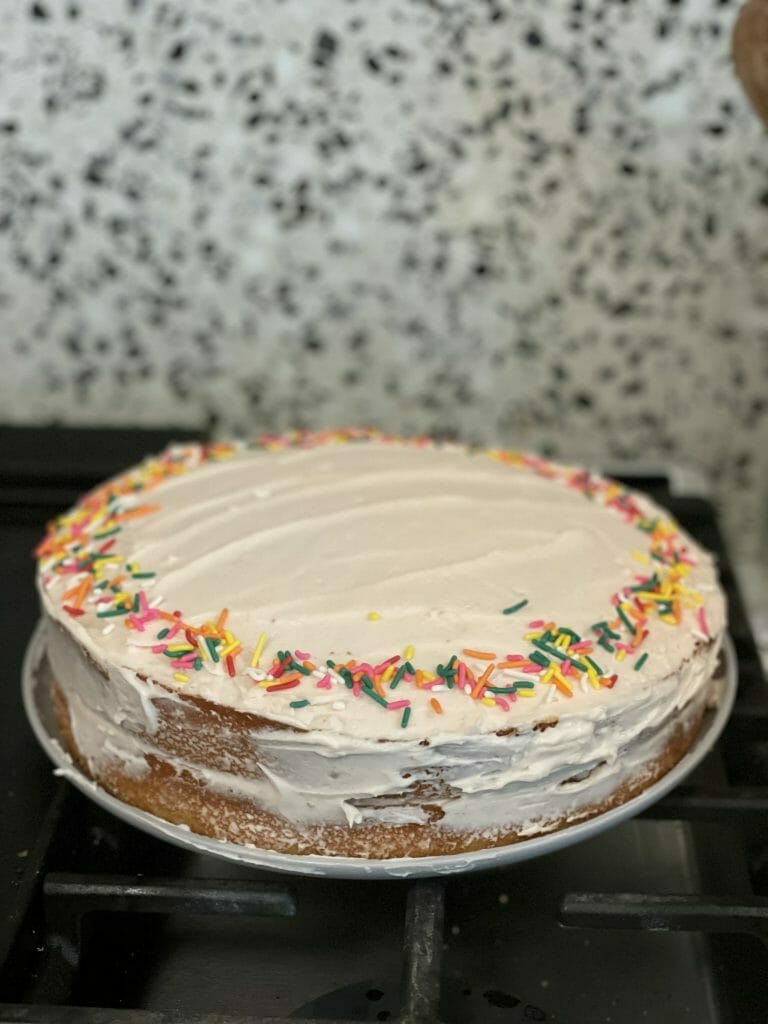 We all know dessert is the most important best meal of the day and those who say you should limit it are dead wrong. We only tried one new dessert recipe this month and while I’d like to tell you it’s because we just don’t eat it that much, the truth is that we like Tillamook ice cream just fine. 😉

Easy Vanilla Cake: Emmy made this simple cake for Wilder, whose request was simply vanilla with sprinkles. She made it in an afternoon and even cleaned up after herself. The cake itself was delicious and just the right amount of vanilla. I do think we’ll make this one again next time Wilder requests cake.

This actually is my favorite meal of the day! I love to start most mornings with black coffee and a smoothie.

Pineapple Protein Smoothie: I made this on a morning I was feeling pretty tropical. Must have been when I was excited about summer coming and it wasn’t too hot yet. 😉 It was fresh and delicious! I used almond milk for the milk and replaced chia seeds with frozen spinach.

Vanilla Mint Smoothie: I made this one up on my own when I’d purchased fresh mint from the farmer’s market. However, it’s exactly like this one, minus the cacao nibs and whipped cream because I prefer a vanilla mint. Super delicious, fresh and smooth! 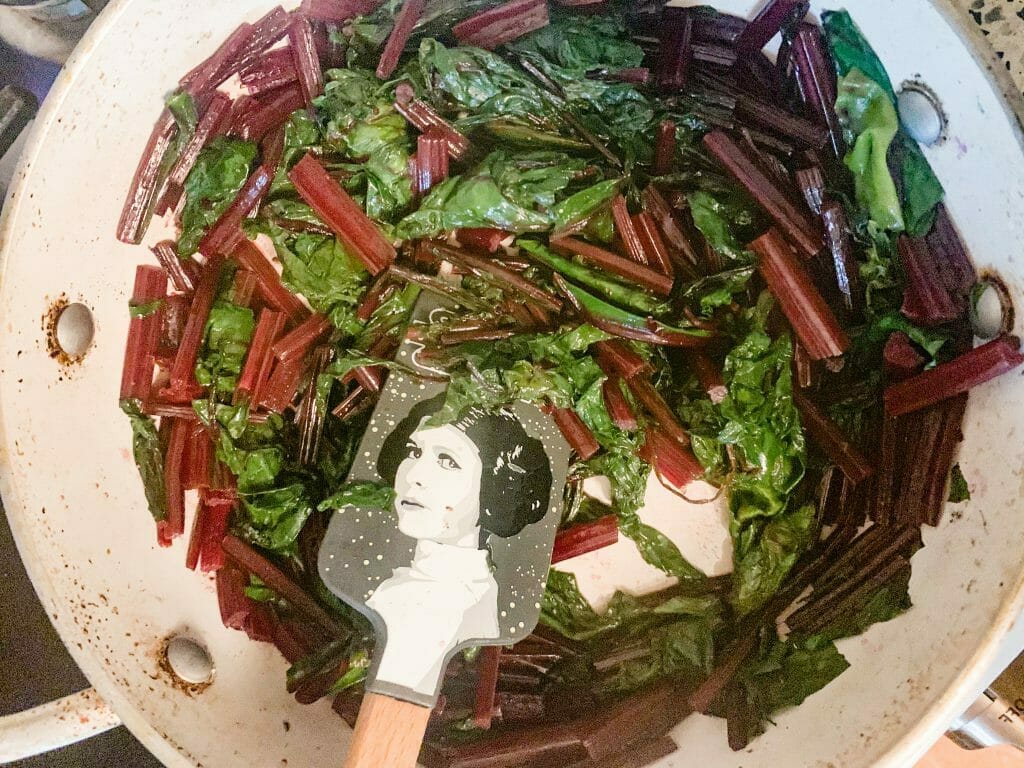 Sauteed Beet Greens: Chris was not a fan of this one, but I thought it was a good way to use up those beets. I would definitely make them again just so we don’t waste the greens, but they weren’t amazing or anything. Nutritious and easy, yes. 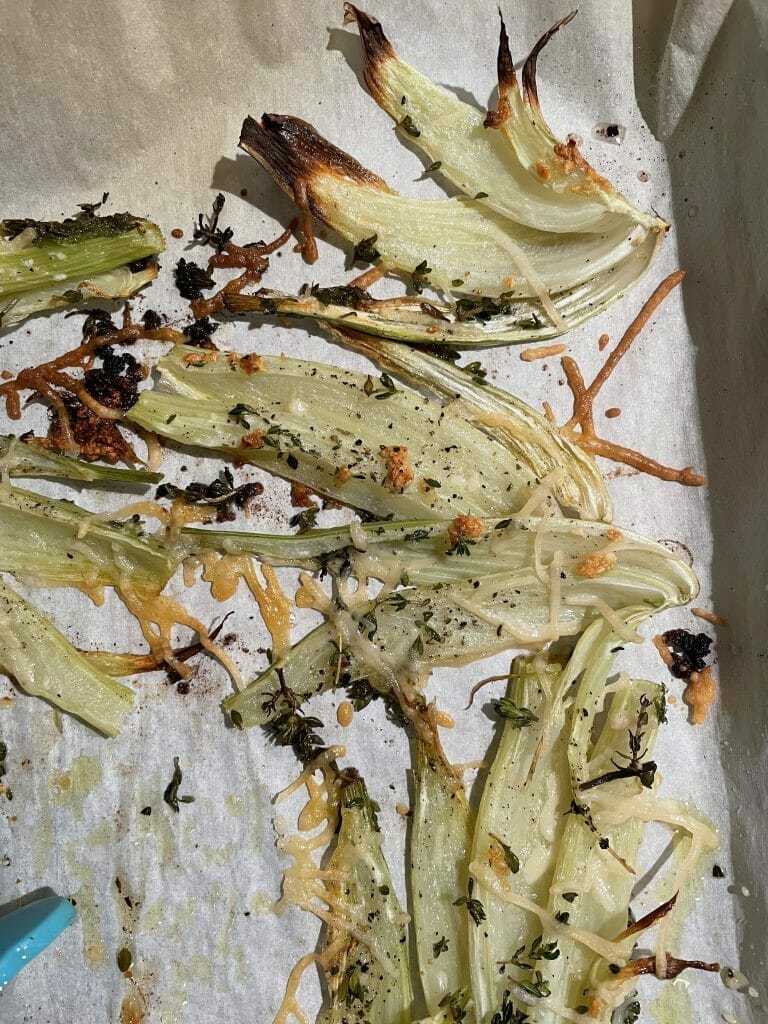 Roasted Fennel: We’ve since made this side a few times. We both love the flavor of fennel and this dish is so simple to make, smells wonderful and tastes incredible. I will say, I ate it the night I got the stomach bug, so I had to take a hiatus from it for a bit. Stomach bugs have a way of ruining food! 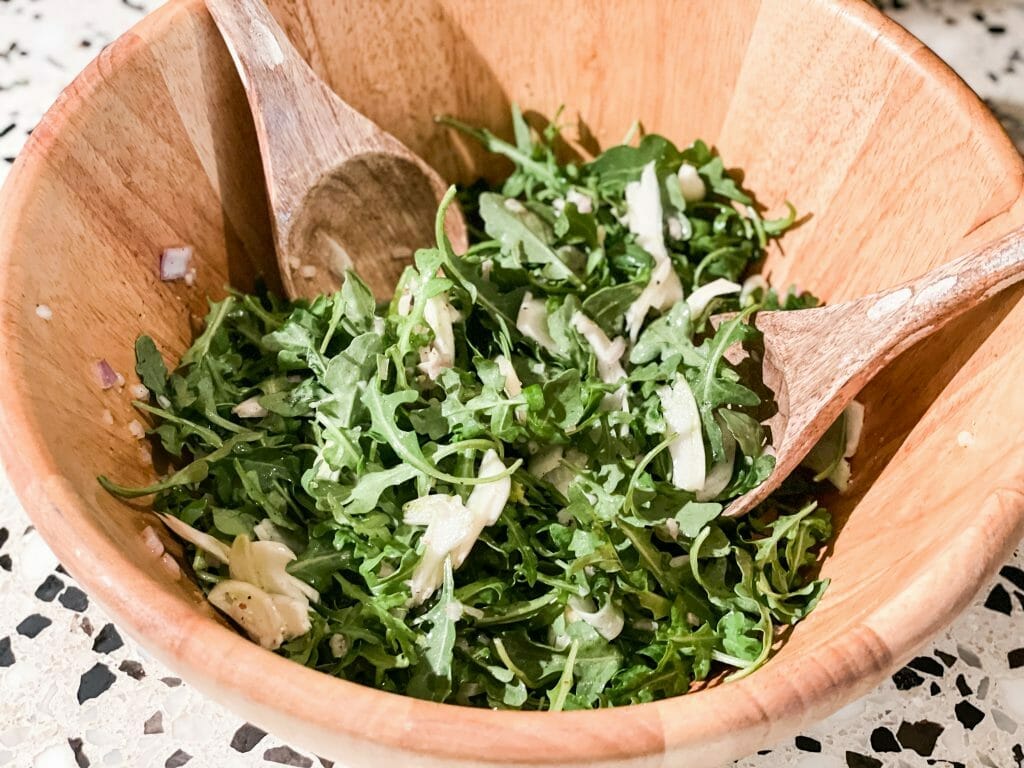 Arugula-Fennel Salad: After being turned off of roasted fennel for a wee bit of time, I looked for fresh ways to use it since I still had some in my fridge. I made this simple arugula-fennel salad and it was a hit! Super light, fresh and perfect for summer.

Quinoa Tabouleh: This fresh and light side dish was so easy to make, but I do think it could use a little more flavor to it. Next time, I’ll just add a little more lime and herbs.

Kale Caesar Salad with Tahini Dressing: After attending a local restaurant opening where they served a kale caesar salad, I had a hankering for more.  However, I wanted a healthier vegan version and settled on this one. I’ve since made the dressing for myself several more times. It’s become a go to! The dressing has great caesar flavor. I love to roast chickpeas and throw them on top for a little crunch and protein.

Vegan Tomato, Spinach & Sausage Quinoa Bowls: This recipe is one I came across when trying to make dinner out of what we had in the refrigerator and pantry. I had a basic idea, googled recipes and found one that fit the bill. It was SOOOOO good! A great accidental find that we’ll definitely be making this fall when the weather starts to cool again. 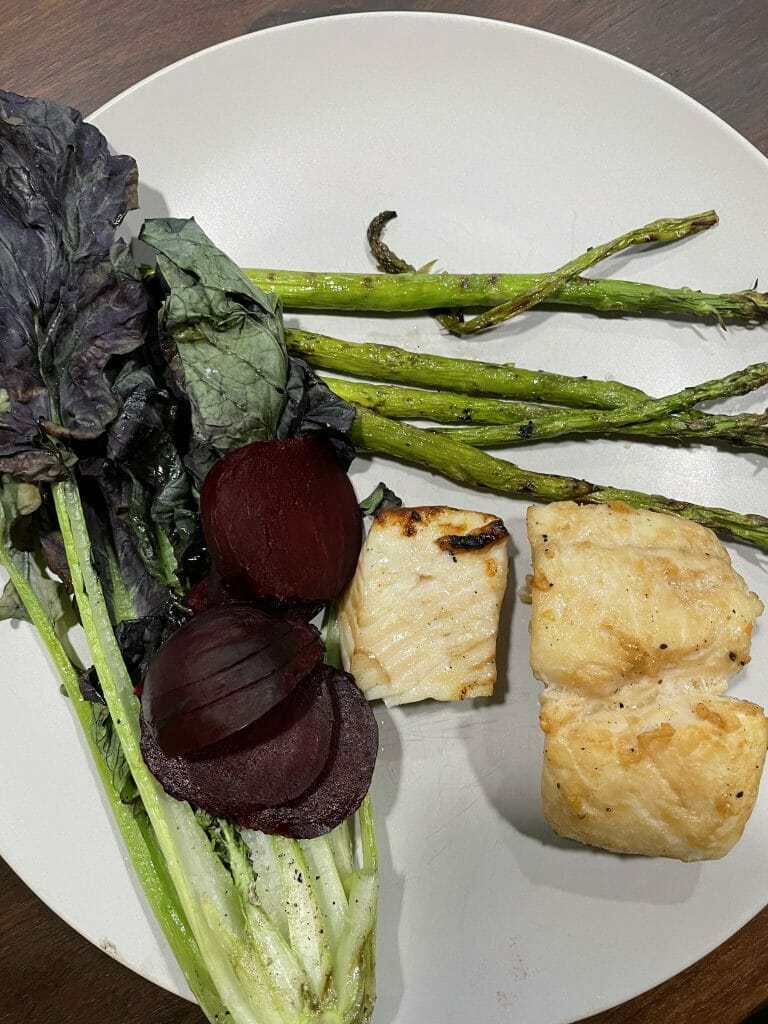 Grilled Halibut: This simple halibut recipe was so flavorful! Chris actually made it for me, but I promise he said it was really easy. He made himself a steak that night and I told him he was missing out. The texture of the fish was perfect – no drying out! 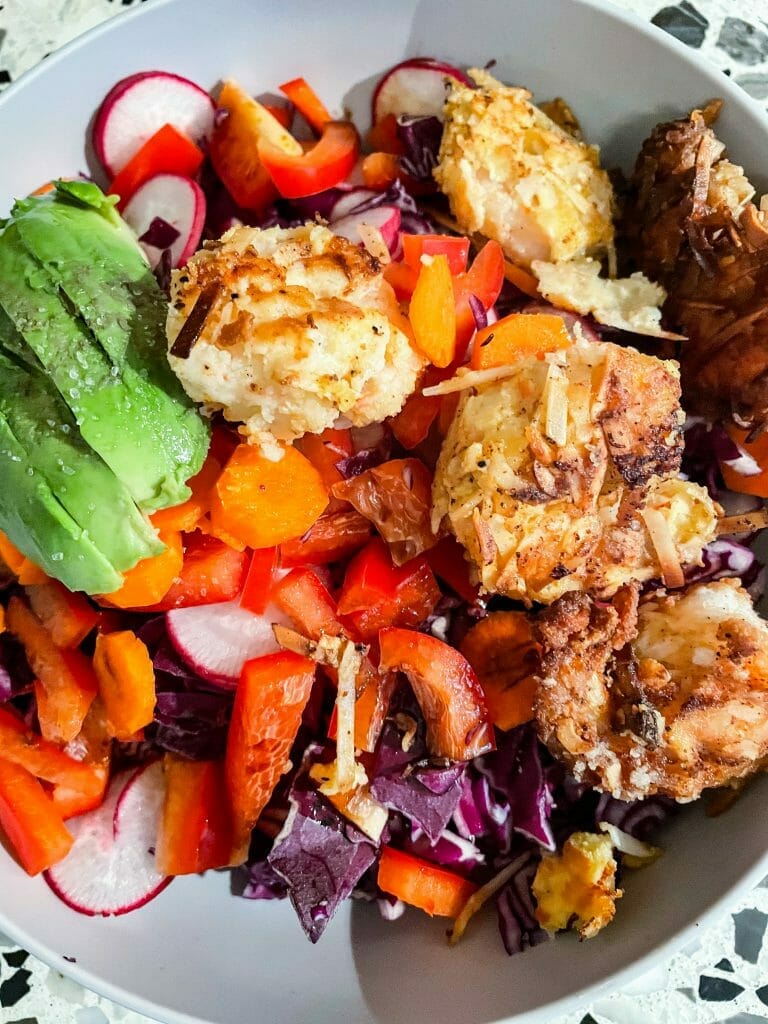 Coconut Shrimp: This one started out pretty messy, with my cussing at the frying pan, smoking up the kitchen, turning on the overhead fans and sure that I had ruined dinner. In the end, it was actually so good! I didn’t ruin dinner after all. The sweet chili sauce was a perfect addition. And probably lost weight cooking because of the anxiety I was up against. 😉 But seriously, we both enjoyed this and now I know what to expect for next time. And yes, there will be a next time. 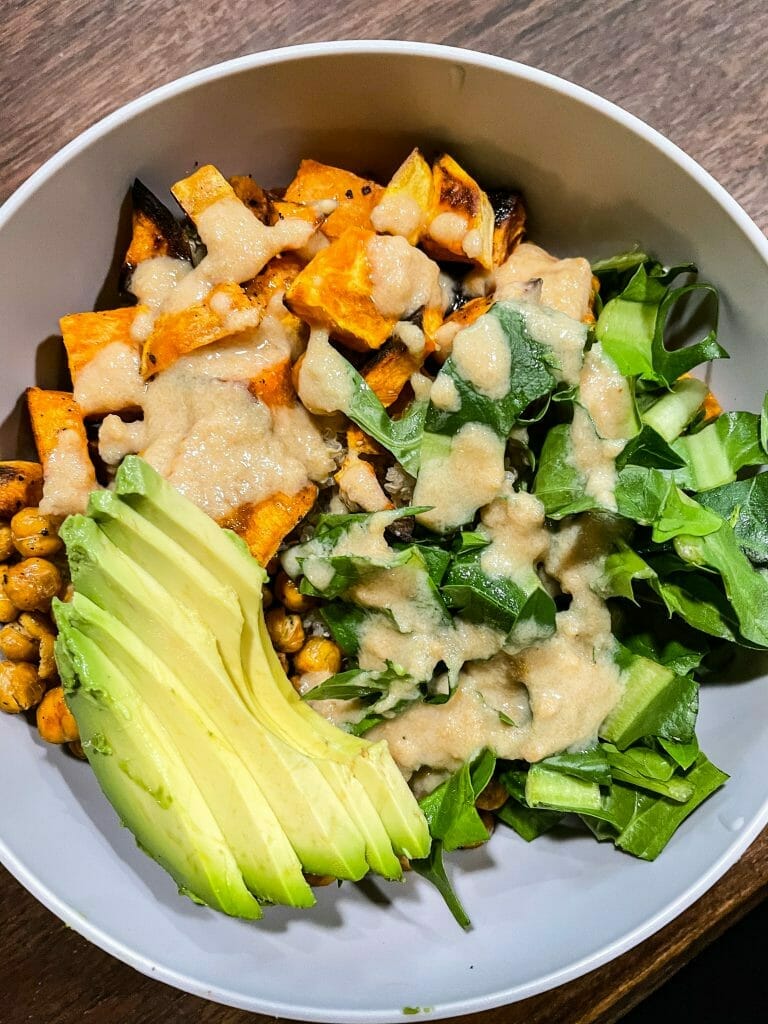 Buddha Bowl: This recipe is another I came across in a quest to use what we had on hand. Chris was on a work call and I had to make dinner decisions on my own so I sorta figured tough luck, we’re going vegan. 😉 This was a delicious and healthy meal, the dressing was a nice sweet touch, but we both agreed that it could use more roasted veggies, such as red peppers. That being said, I’ve made it a few more times on the nights when Chris is away and I. need an easy and healthy meal.

Salmon with Fennel & Citrus: This simple salmon recipe is baked on the oven, layered over fennel and citrus. It was light and delicious. We found we had to bake it longer than recommended, but it was a winner. We’ll make it again. It actually turned me on to slow-baking salmon and led me to the next recipe. 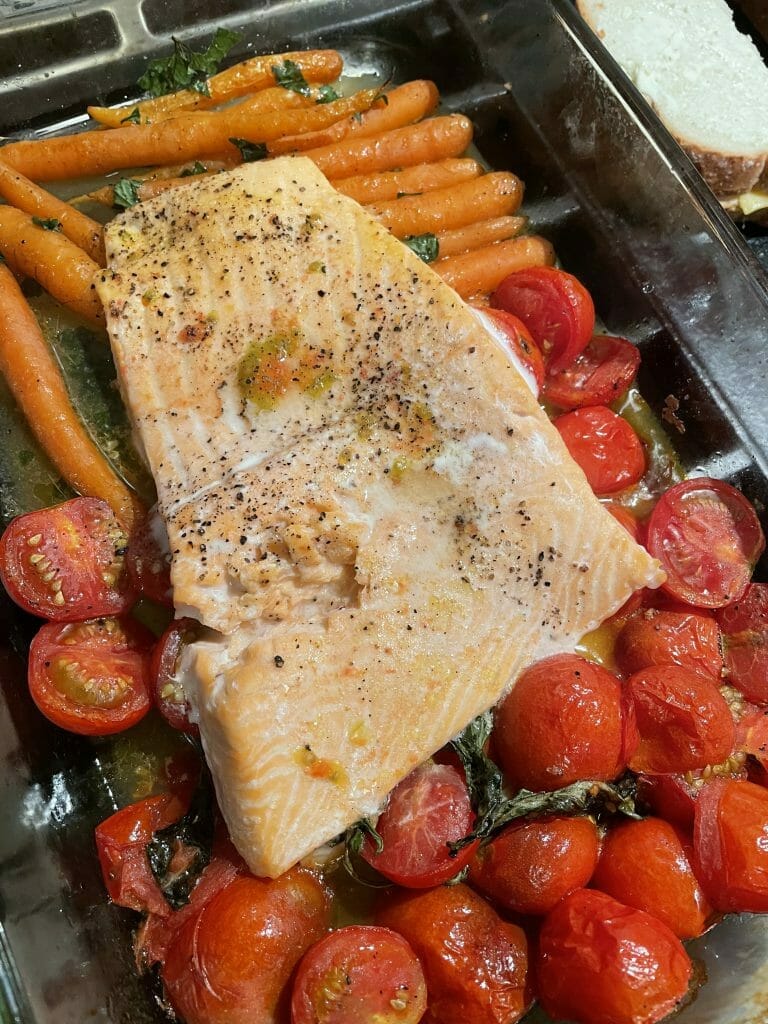 Slow-Baked Salmon & Cherry Tomatoes: Fins down, this was our favorite meal over the last two months. We’ve made it a few times because it’s ridiculously easy and tasty! I’ve since had friends who have baked it as well and let me know they loved it, too. That Martha. She actually does know what she’s doing.

Citrus Vinaigrette: I found this recipe when looking for a light vinaigrette to toss on some greens with strawberries. So simple to make and the perfect flavor with the right amount of sweetness. Even though I used it as a spring recipe, I think it would work well in the fall with fall fruits and salads.

Have you tried any of these recipes yet? I do share them often in my Feel Good Friday posts, so you may have seen them before. I’d love to hear from you if you have and what you thought! Or, do you have any must- try recipes you want me to put to the test. Send them my way!