Happy Wednesday!  If you have been around here for a while, you may recall a couple prior versions of Sawyer’s bedroom.  Unlike Emmy, he does not like much change, so it’s just had some minor tweaks over time.  When we first moved in, we created a Star Wars inspired space for him.  Last year we added in Americana since he loves history.  You can click here to see where it was a year ago.  Honestly, not much has changed, but we changed out the two dressers for one longer  midcentury dresser, and of course we added some awesome lego storage under his bed.  But also, if I am being honest, last week the kids rooms were in tip top shape, cleaned and organized (I will be sharing more on that soon!), so it was the perfect chance for me to shoot them and update them.

As I said, the major change was taking Sawyer from two smaller dresser to one larger dresser.  I loved the clean lines of this midcentury piece and felt more mature for my growing boy.  We had to also spread the beds a little farther apart which really opened up the center of his room, which is where he plays with all of his legs.  Win win! 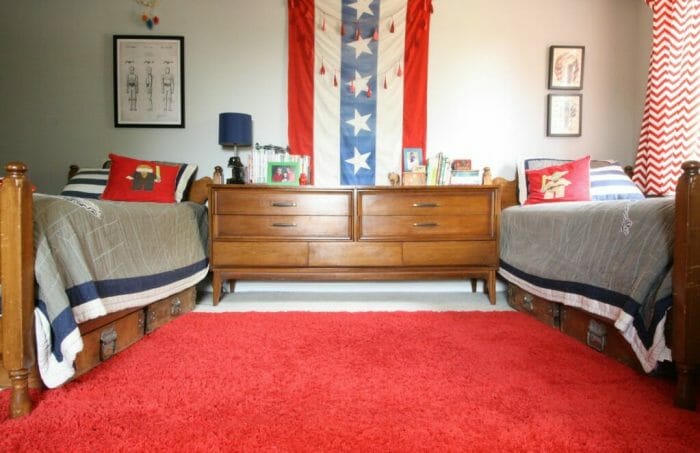 And as you can see, the industrial drawers I shared last week are perfect under his beds.  They also have plenty of room now for him to pull them all the way out and sift through.

On top of the dresser, we “decorated” with things that are special to Sawyer, including several of his books and treasure boxes as well as some special photos, and of course his Darth alarm clock! 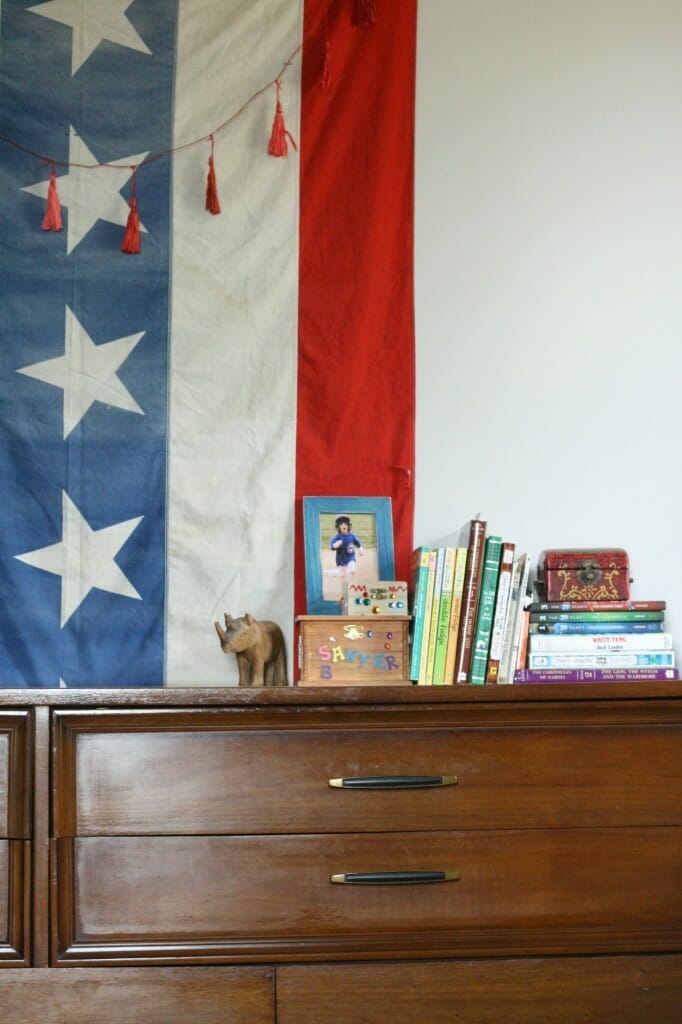 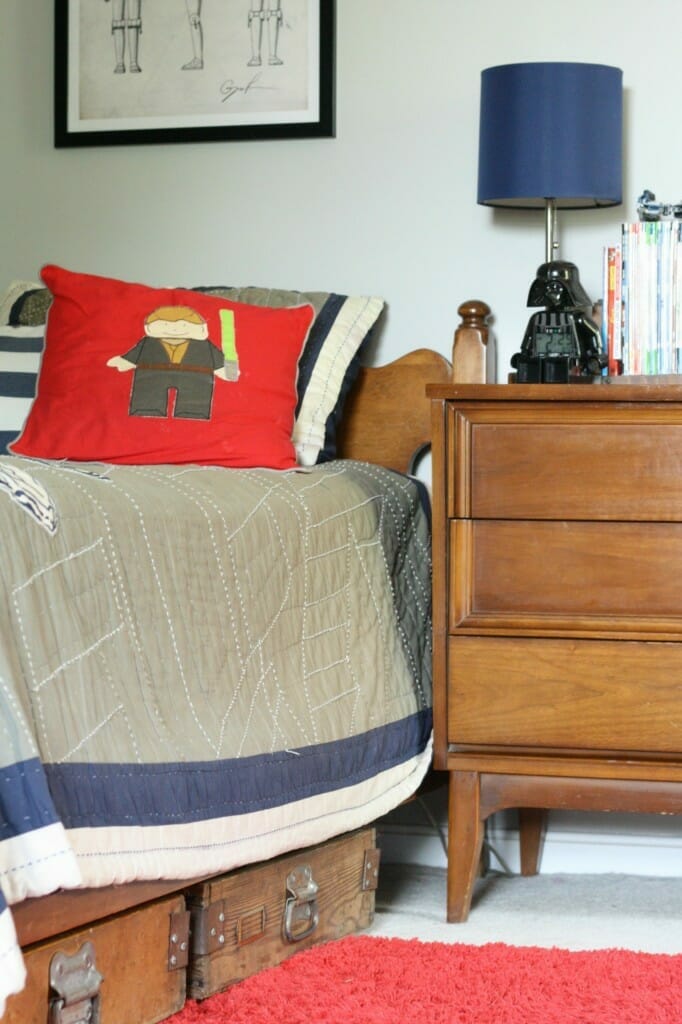 I purchased the vintage flag almost two years ago at the Country Living Fair and it might be my favorite piece in the room!  The red garland is from Ikea at Christmas time, but I thought it was a fun touch year round. 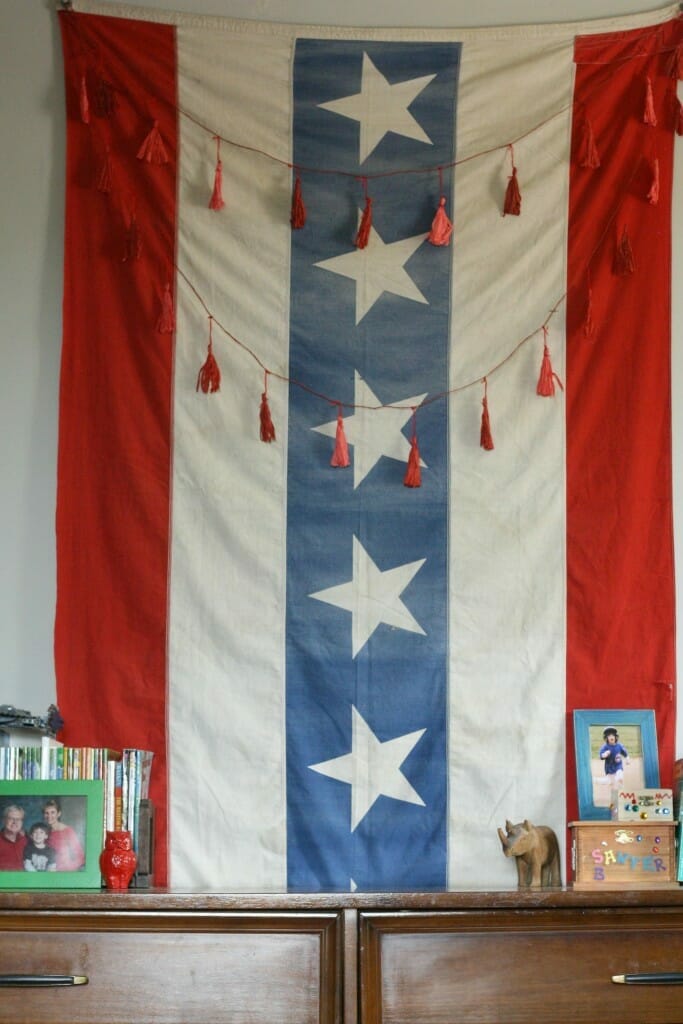 I have also brought in a little bit of new artwork, including this C3PO poster which we carry at Sweet Clover.  And I want to note that the lego Star Wars pillows were hand made by my mom…. they were so time consuming and challenging that they are sure to be one of a kind. 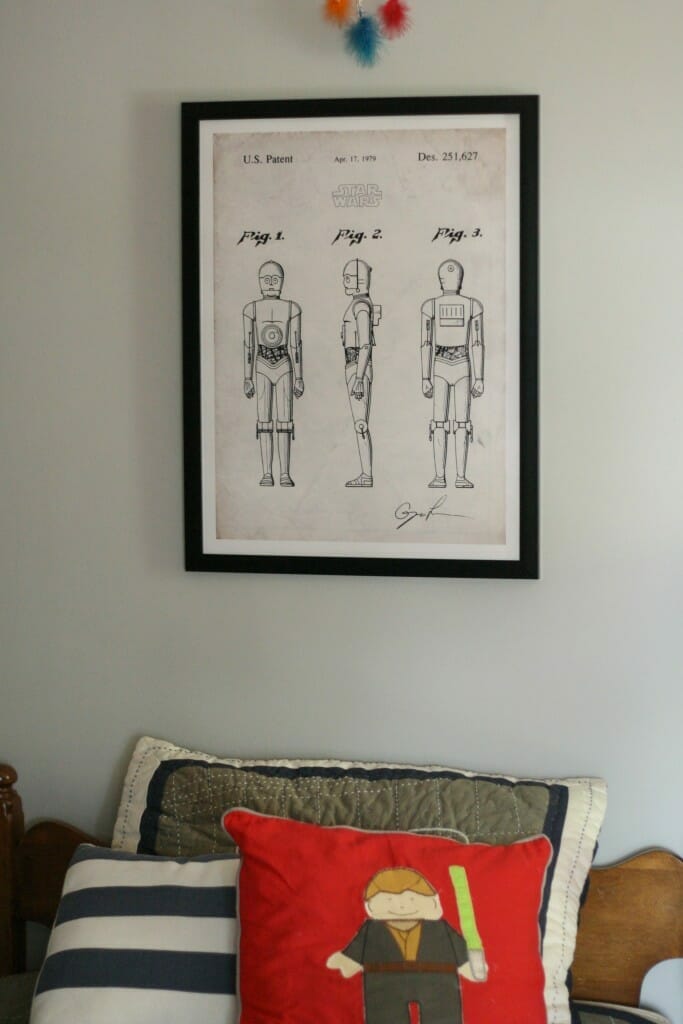 Above the other bed hangs a pair of Star Wars art to create balance. 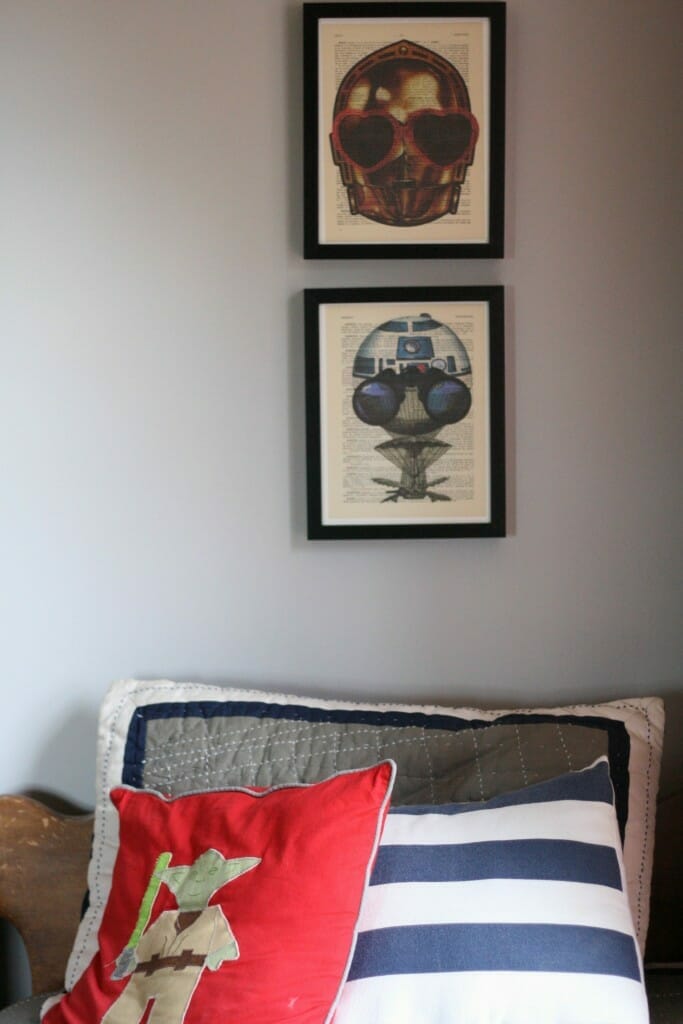 The art in his room keeps a cohesive palette with the room. 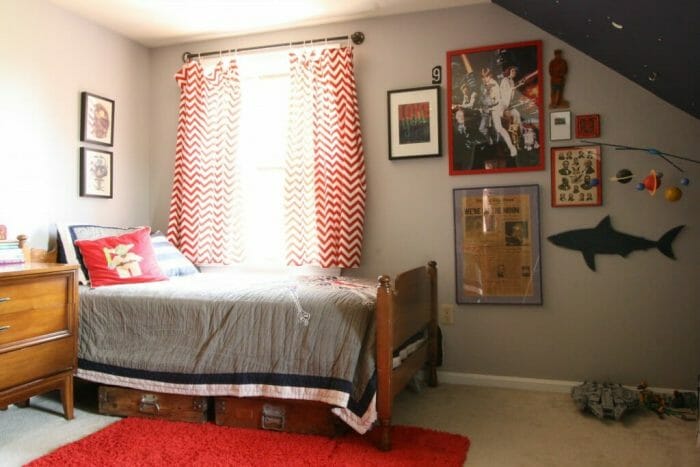 In the gallery wall, I also added some new art… A “Love You More! Nope, That’s Impossible!” print from Sweet Clover.  That’s our special saying and the artist added the “Nope, That’s impossible!” for me.  I found the weathered metal “9” on the ground when I was out for a walk last week.  Sawyer’s birthday is August 9th, so I thought it was perfect for him! 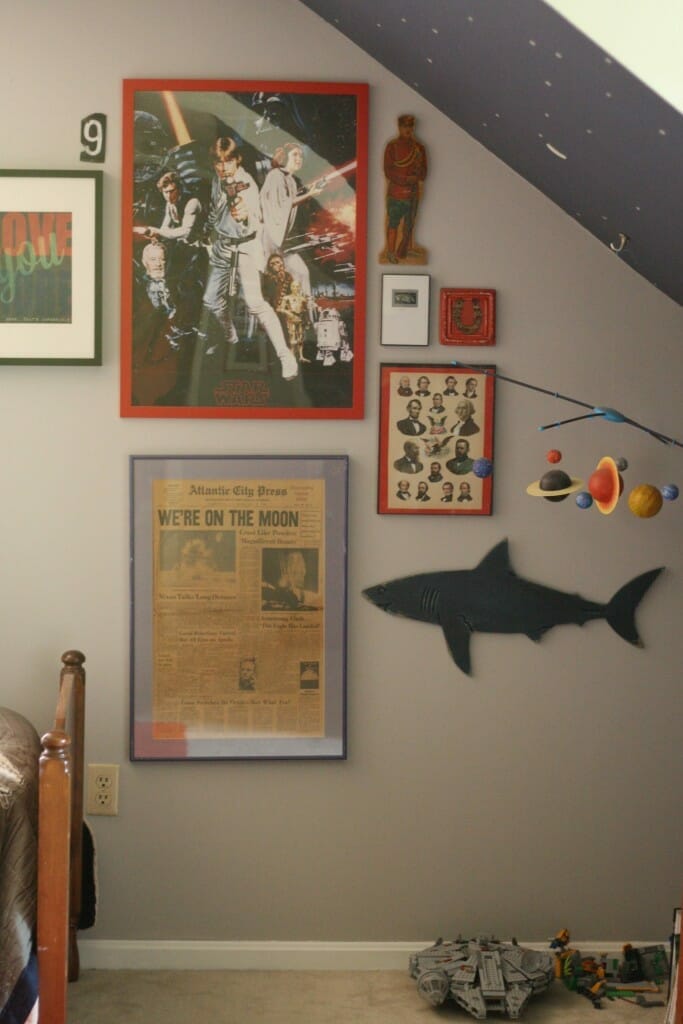 His desk nook has stayed the same, and believe it or not, now that we have the drawers under his bed, these shelves are much less lego cluttered! 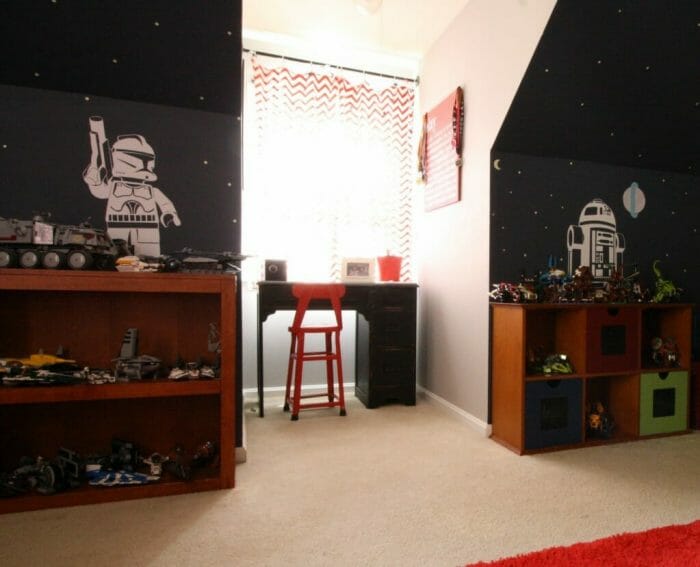 Sawyer is always pretty content to keep his room from changing… but recently he did ask me to paint the rest of the walls navy, like the angled wall…. 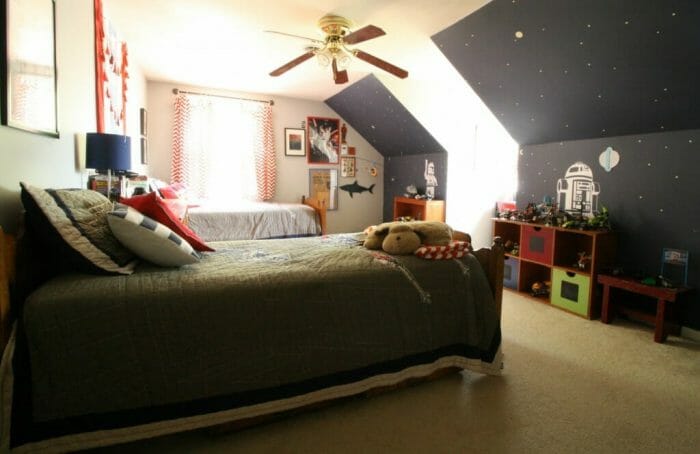 And I would love to change out the ceiling fan at some point, too.  So there are still some projects in the wings for this space!  But I thought it was worth updating!

Pin
Share
Tweet
0 Shares
« My Pale Pink Bathroom Reveal and a $100 Ace Hardware Giveaway!
Printing a Downloadable Printable with SnapBox (Our “Let It Be” Art) »