Hi guys!  I hope you all had a safe and happy weekend wherever you were.  We had a pretty gray one but that didn’t stop us from having a great little celebration for Emmy’s birthday.  A couple of years ago, I was chatting with my friend Becky, and she told me about what she does for her kids’ birthdays.  She gives her kids a budget and they can use it as they wish, towards a party and all that entails, or towards a gift or some combination.  That summer when Sawyer’s birthday hit, I implemented that idea in our house and my kids love it.  With Emmy’s birthday rolling around I told her she had $200 to do as she wished.  She decided to have a slumber party and keep things rather simple.  She was involved with all of the shopping we did, selected the food and snacks, chose what activities they’d be done, and I helped her find favors that suited her slumber party theme.  Today I wanted to share our simple tween girl’s slumber party. 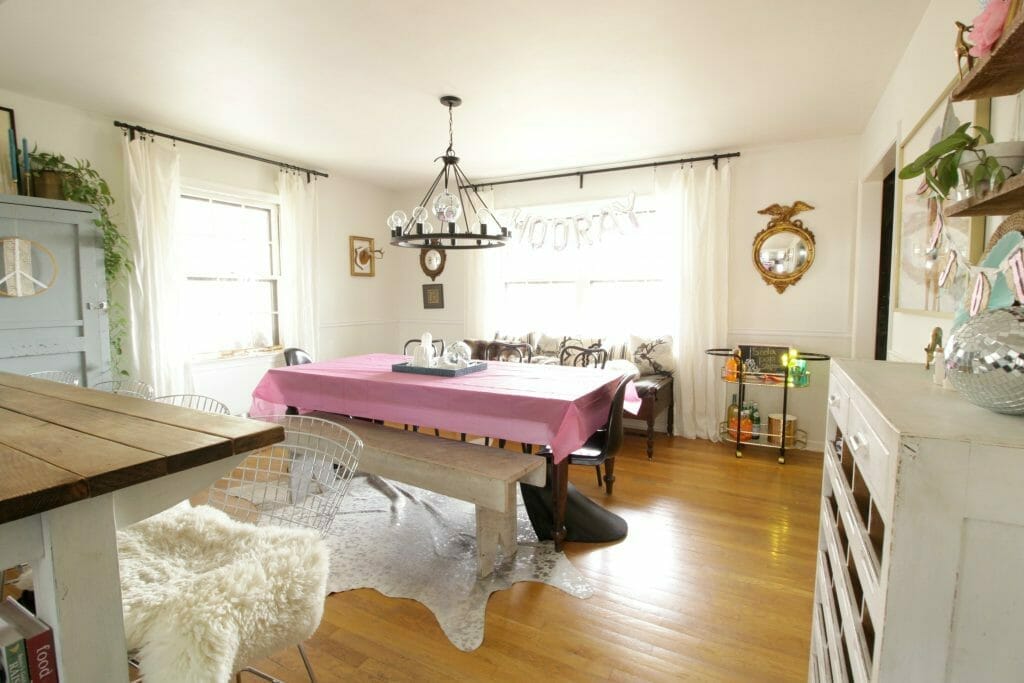 We kept all of the decorations to the dining room where the girls would eat, Emmy would open gifts, and they would have their “Soda Pop” floats for dessert.  Emmy did decorate the playroom chalk board as well, but I didn’t get to photograph that.  That’s where the girls spent their time playing, doing karaoke, watching a movie, and sleeping.

Because we wanted to keep the budget down, we decorated with a lot of things I already had on hand as you will see, purchasing only the paper products we needed and a balloon banner. 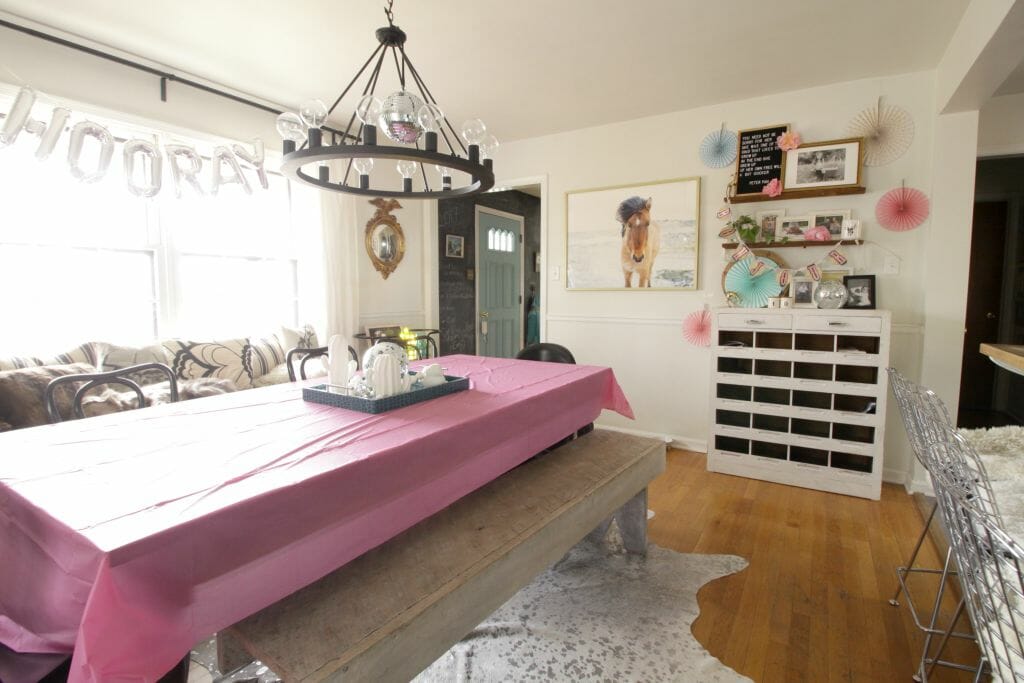 My absolute favorite part was the shelving above the white cabinet (which I still have yet to officially introduce on the blog!) 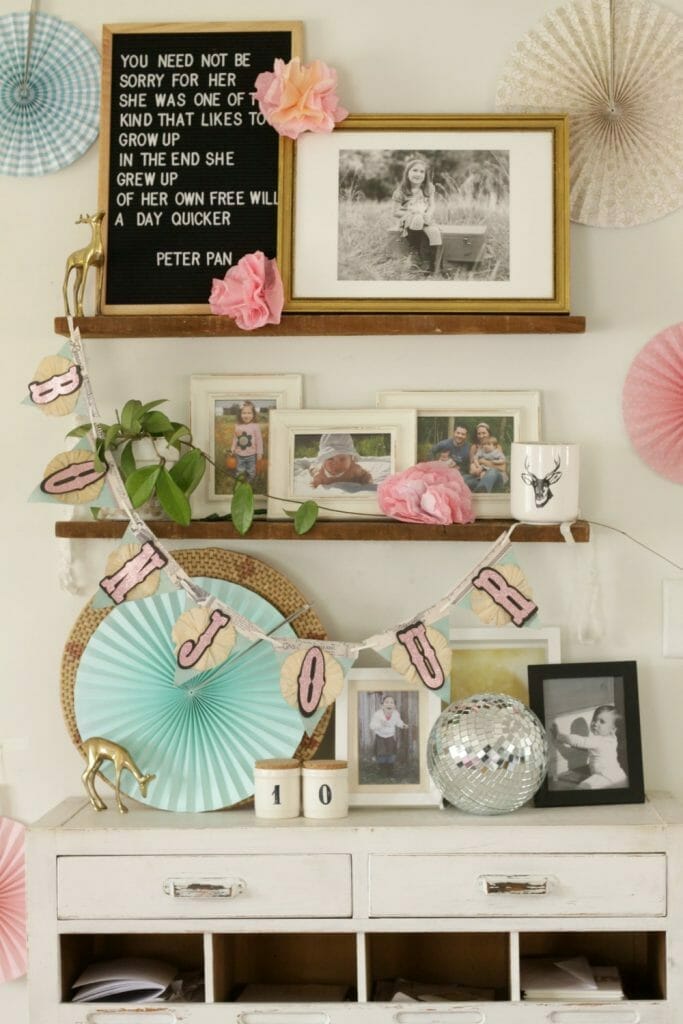 A friend had sent Emmy some fun paper fans in aqua, white, pink, and gold for Christmas so we decided to use them for the party, surrounding this area.  As you can see, I placed lots of framed photos of Emmy through the years on the shelves and might have cried while doing so.  I also added in some coffee filter flowers in pink that I made last year on a craft day with a friend.  My anthropologie numbered spice jars signified Emmy’s age.  I also added in a disco ball, and a bonjour banner that hung in her room in our home.  My Letter Love Goods letter board (a gift from Chris for Christmas) was filled in with a sweet quote about growing up from Peter Pan, a story our family loves.

I mean, just look at those chubby little cheeks. 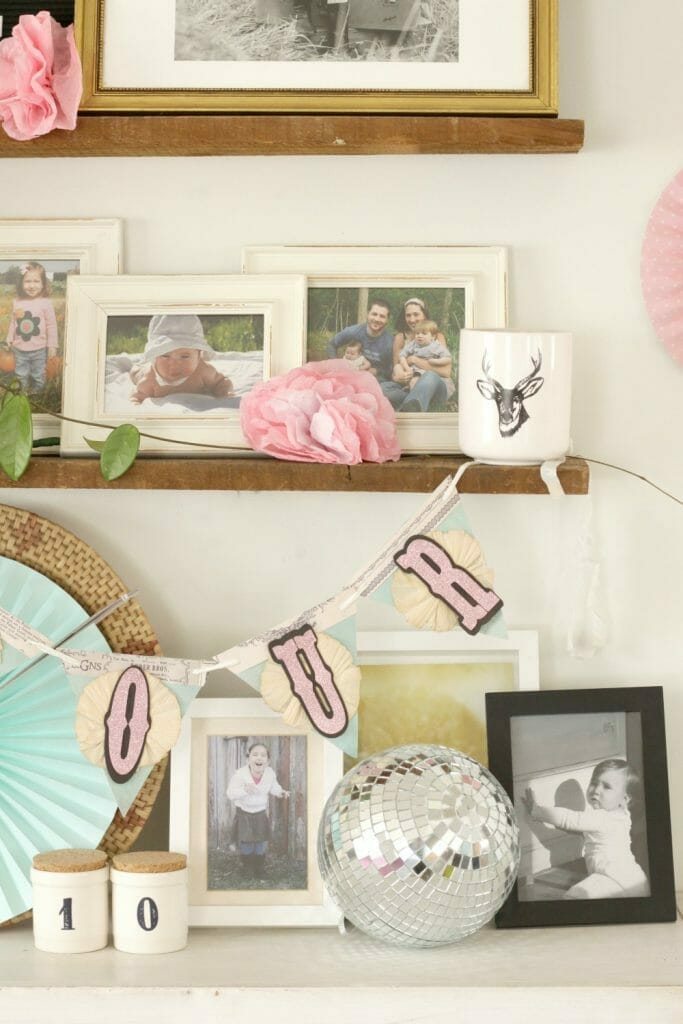 On the bar cart, we created a little “Vintage Soda Shoppe” space.  Emmy had written on the chalkboard and brought it to me and asked if we could use it.  Of course!  We stocked it with root beer and orange soda, an ice cream scoop, longer plastic ice cream spoons, aqua cups, and a fun light up cactus sign Sawyer gave Emmy for her birthday (along with a cactus sketch book and the most fun cactus erasers.  Emmy is obsessed with fun erasers at the moment).  Oddly enough, the girls all LOVED the ice cream spoons.  They’re nice and thick and reusable, so I washed them all after… one little girl asked if she could take hers home so we sent that with her. 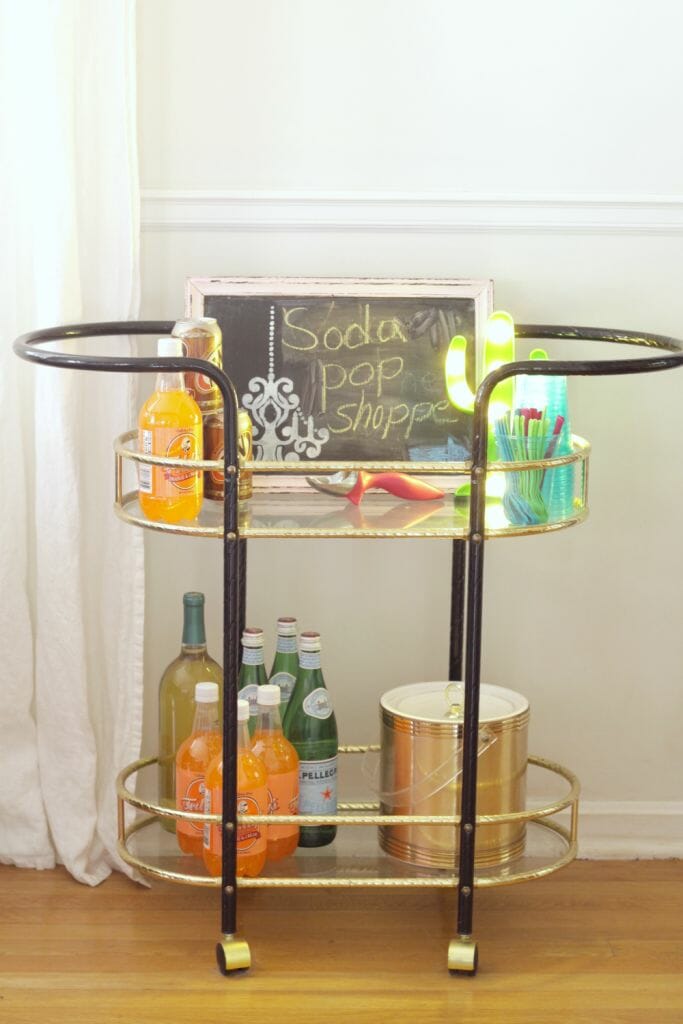 Much of what we needed we were able to order from Amazon which helped save me from being tempted to shop for things I did not need. 😉 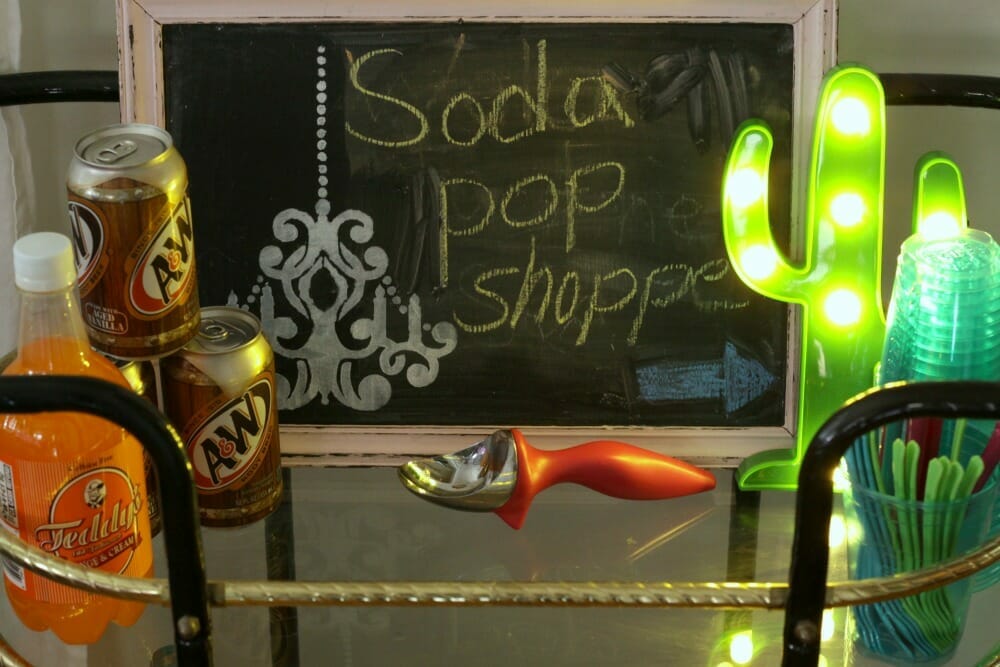 On the table I placed a pink plastic tablecloth from Dollar Tree just to protect the table from ice cream and more!  I also picked up pink paper plates there, and we used some pink owl napkins my mom put in my Christmas stocking.  To tie it all together, I created an eclectic centerpiece using all items I had on hand. 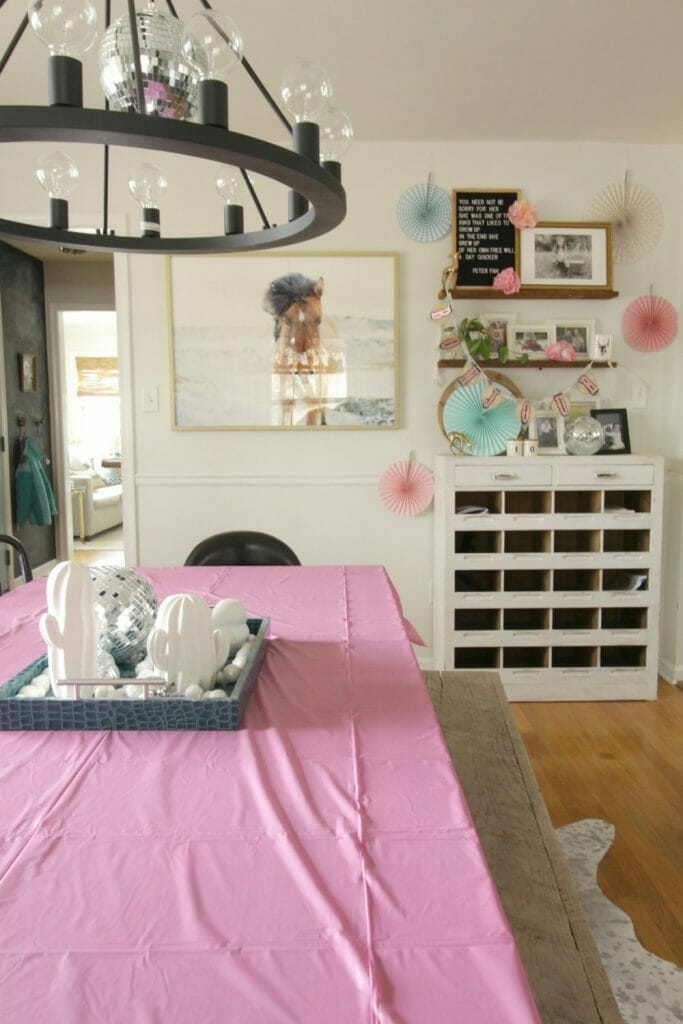 This teal tray used to be on my nightstand, but I recently removed it.  I filled it with white cacti figures, white owls (similar), a disco ball and some disco ball ornaments and a white glittering ball garland. 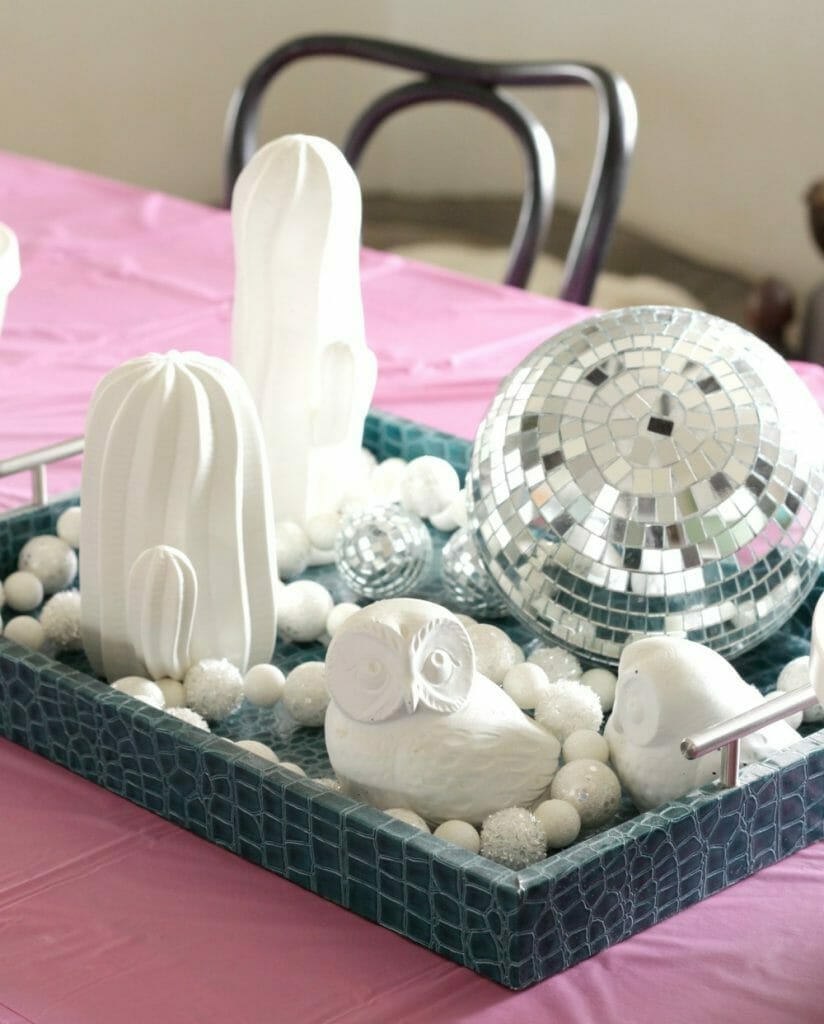 I also hung one of my disco balls from the light fixture to add a little sparkle. 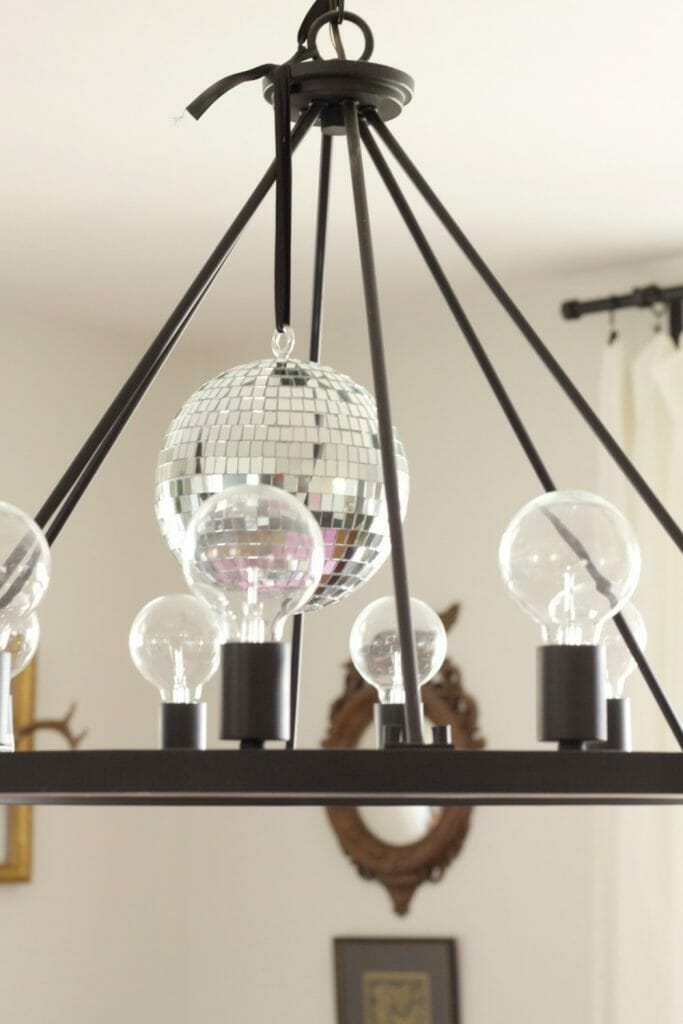 The last touch came from Target.  I had noticed a fabulous shiny balloon banner at my friend’s daughter’s party the week before.  I texted her and said “Hey, where did you get that awesome banner?”  She replied, “Target.  It’s $5 and I am there now if you want me to get it.”  Done.  She found the last one for me, and saved me a trip to Target as well as the money I may have otherwise been tempted to spend. 😉  I blew it up and hung it in the window.  I kind of want to keep it up forever…it makes me pretty happy.  I feel warm and fuzzy inside when I look at it. 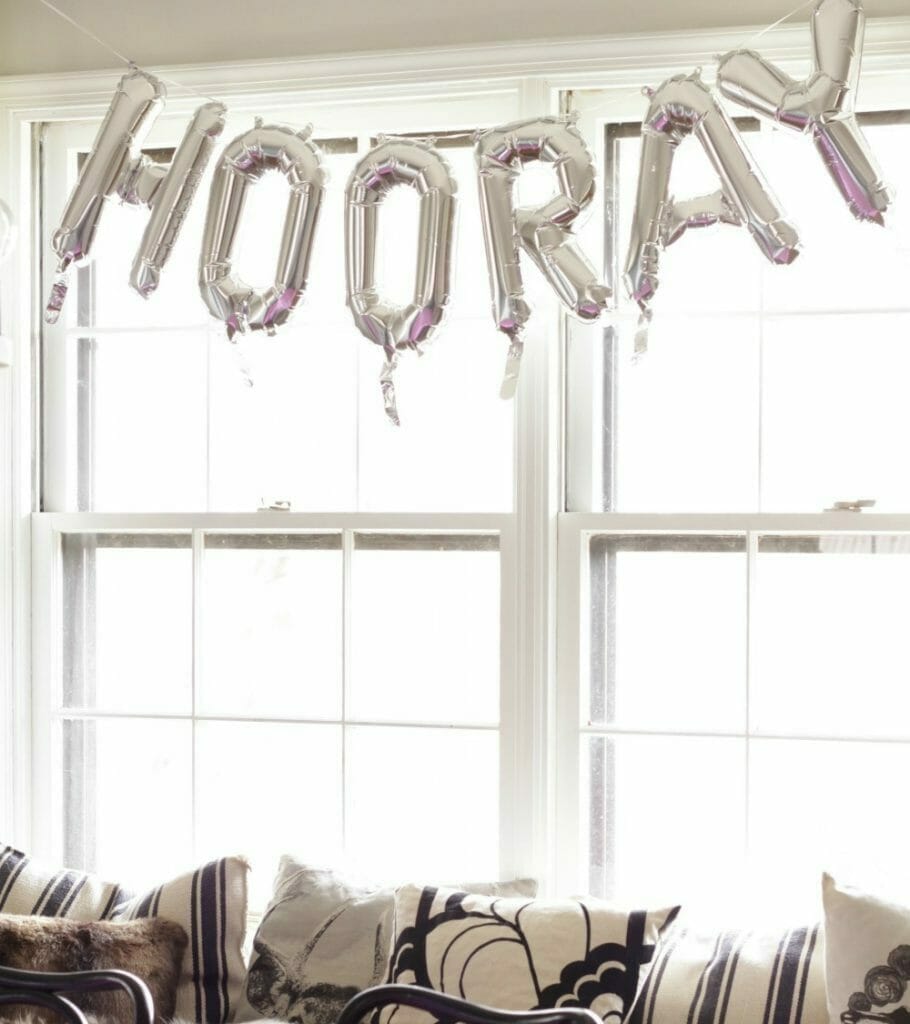 Now… to give you the full picture of what was really happening with I shot this before the party.  My dogs were napping on the daybed, and the image of passed out pups with a “Hooray!” banner had me cracking up.  If this photo doesn’t just scream hooray, then I don’t know what does. 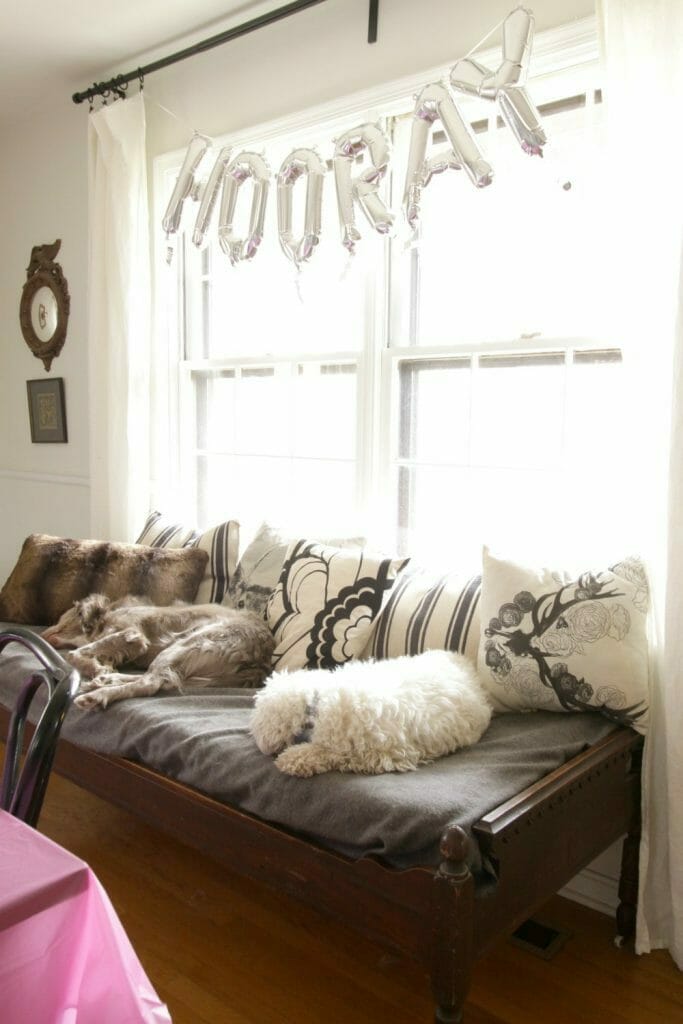 Now we get to my absolute favorite part… the party favors!  Since Emmy was having a slumber party, we searched Amazon for fun sleeping masks and nail polish, both of which we found.  Emmy wanted to keep the cost down (more of the budget left for her that way!)  We found some pretty pastel nail polish (some of which ended up on the playroom carpet….. ugh) and the coolest rainbow sleep masks that came in a pack of 12 for just $16. The girls were excited to change into their PJs, put on their sleep masks, and have their ice cream floats.  They all wore the masks on their heads until bedtime. 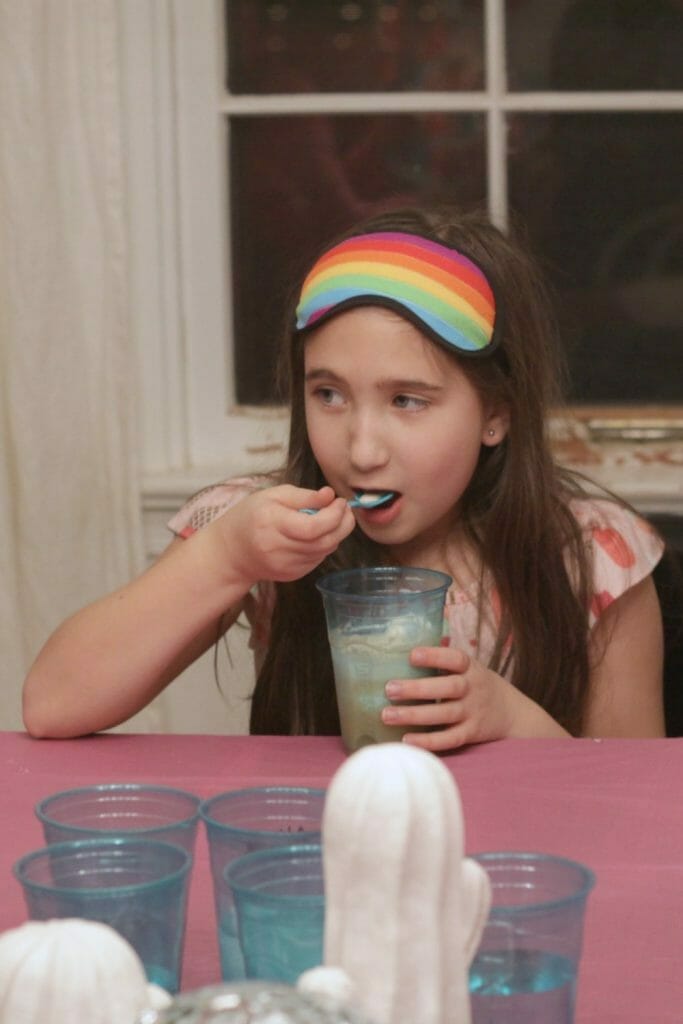 Side note… you see that photo above of my 10 year old?  Yes?  Do you know what I see when I look at it.  I still see this (insert weeping): 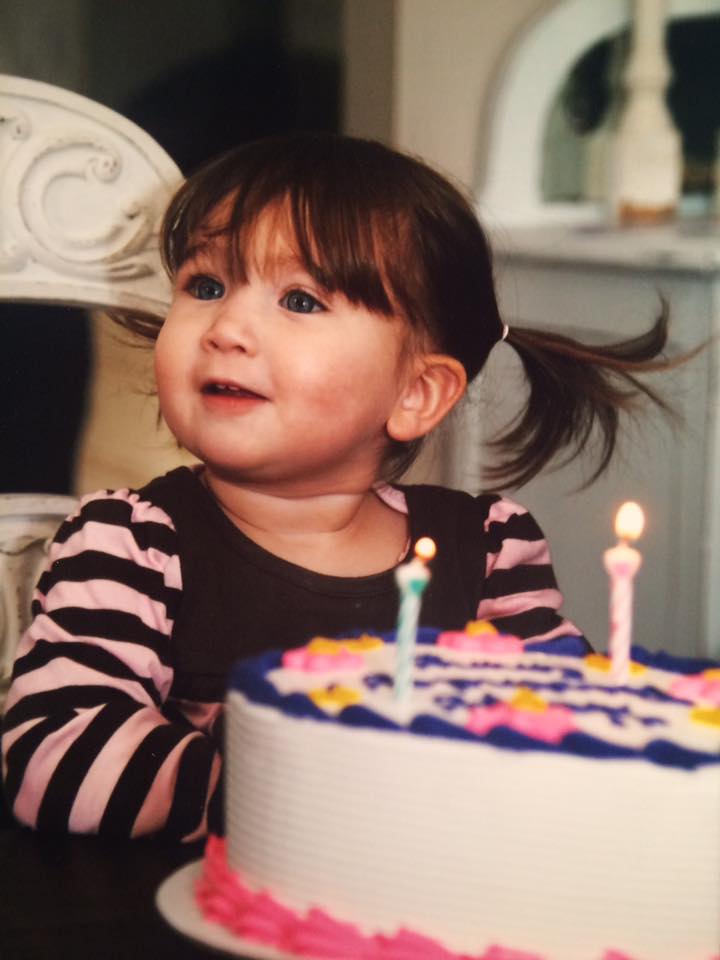 Anyhow, the sleepover party was a great success, but I have to tell you that my best idea came the morning after while the girls were having breakfast.  (By the way, we made these french toast sticks which my kids LOOOOOOVE.  They’re made with yogurt instead of milk and delicious.)  They were all chatting over breakfast playing “Would you rather” when the question of “Would you rather ride a unicorn” or some other creature came up.  One of the girls replied that unicorns weren’t real. It was a rather foggy and misty white morning outside, so I joined the conversation. “Actually, girls, unicorns come out on misty mornings like these.  They’re less likely to be seen when they blend in with the fog, so it’s safer for them.”  After that, they put on their shoes, grabbed a bunch of carrots, created agent names, and went outside on a unicorn quest, and most of them were wearing their masks once again.. 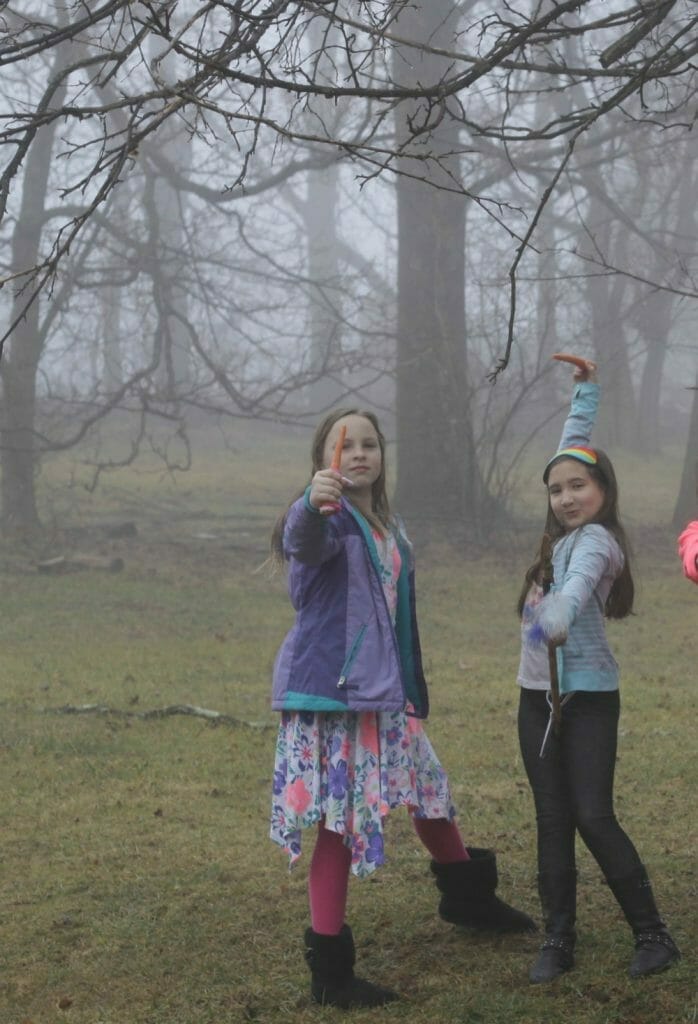 They stayed outside for an hour on their quest while I enjoyed my coffee and some peace and quiet, and everyone was happy. 😉

Have a great Monday!