Check out this super stylish fan perfect for small bedrooms!

In a world full of One Room Challenges (such as my own which will soon be revealed), we often forget that truly making a house a home can take time.  Often times, the final detail in a room makes me step back and say, “Ah, yes.  Now it feels done.”  While I have shared with you several rooms in our home that I am satisfied with, they weren’t truly done. There was one glaring detail that desperately needed to be changed.  In full disclosure here, I cropped this atrocity out of my photos because it was an eyesore, and all of our bedrooms fell victim to this 1980-something fixture.  That gem of a feature that I am referring to, one that frankly we could not live without, was our bedroom ceiling fans.  Thankfully, I’ve partnered with The Hunter Fan Company to bring our bedrooms completely into the next decade.  Over the next few months I will be sharing all of these changes with you and you’ll see just how the right ceiling fan can dramatically change the entire space.  Today I am going to show you the perfect modern ceiling fan for small spaces: Wilder’s Hunter Minimus fan. (Thank you to The Hunter Fan Company for providing me with this ceiling fan.  I was not otherwise compensated and all opinions are my own.) 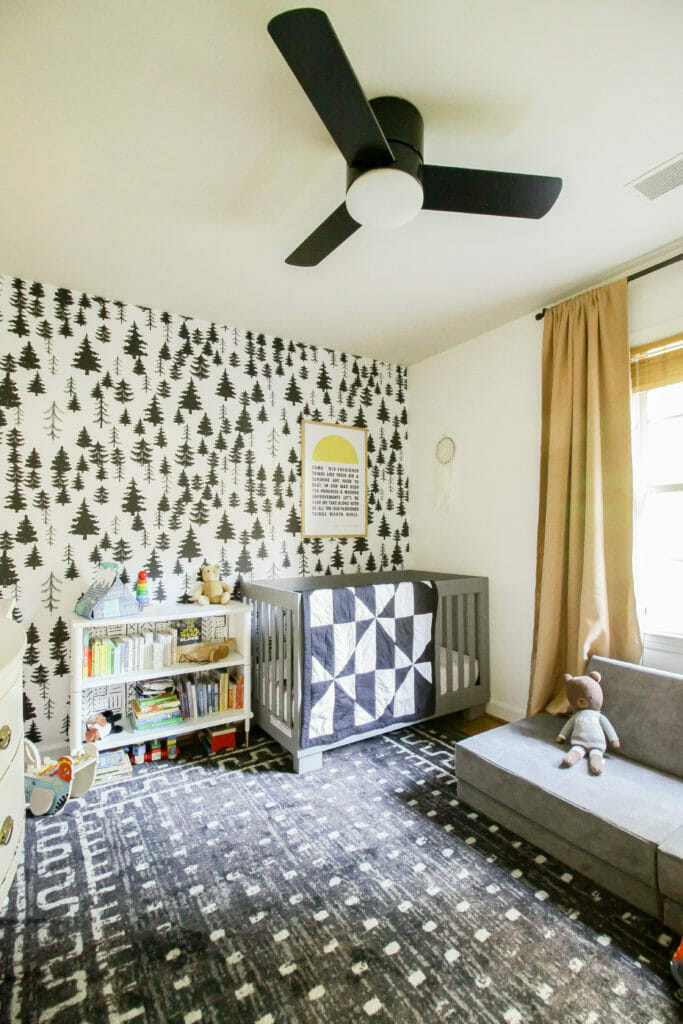 Before I go on to tell you all about this rad fan, let’s take a little glimpse back to where we were before.  The last time you saw this room, it looked like this, with the old ceiling fan artfully cropped from the frame.  As I mentioned, I have been cropping those fans out of our bedrooms since we moved here in January, because they were all just awful. 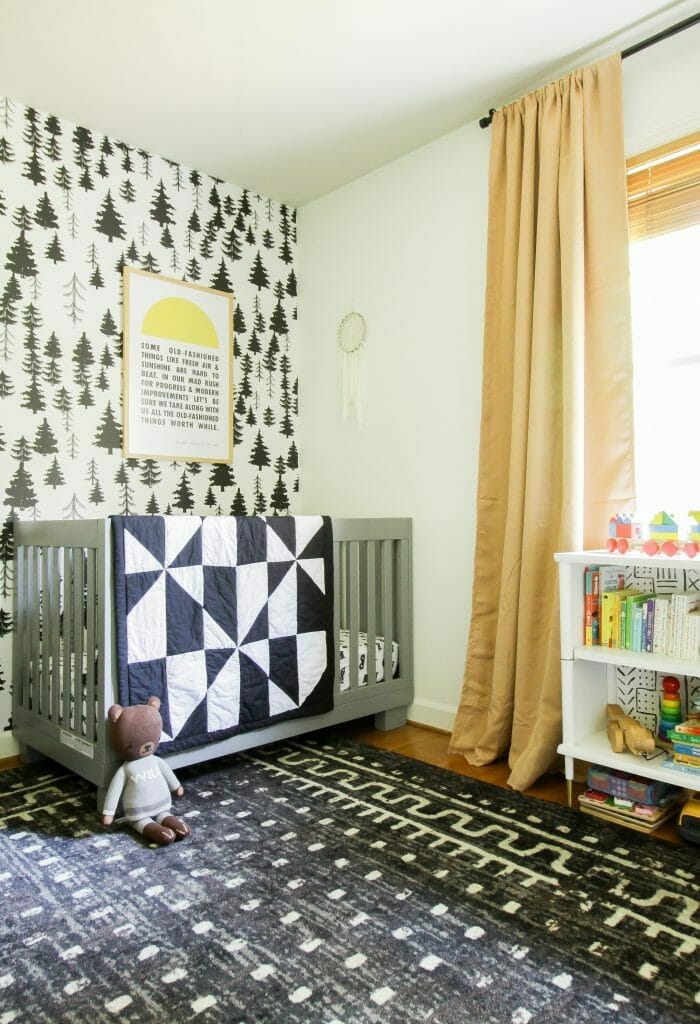 Luckily for you, I save all of my unedited files as well, so I’ve searched and found this gem from earlier this year for you which really shows off the ceiling fan and the curve of those terrible light bulbs.  And let’s not forget those long chains.  Chris and I are not tall people, yet we were always hitting our heads on them.  Yes, I could have shortened them, but I just didn’t see the point in wasting even five minutes on this terrible fan when I knew we’d be replacing it eventually.  Frankly, it just wasn’t worth my effort. 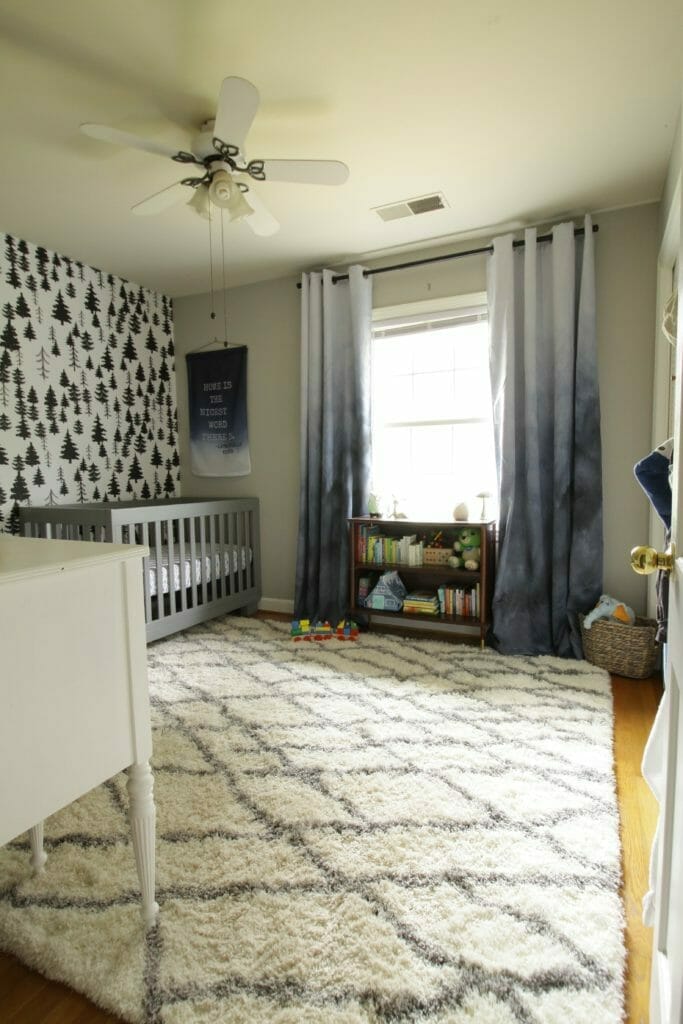 Instead I put that effort towards making Wilder’s room a special place for our baby boy. We had made such wonderful progress on his room throughout the year, and I was so happy with all of the changes from the wallpaper to the mustard curtains, the new rug… it was feeling so much like the perfect toddler boy’s room to me, except for that darn ceiling fan.  It was finally time to tackle it.

Wilder’s bedroom is the smallest of the rooms in our home, so we needed a fan that not only was going to fit the aesthetics, but also the scale of the space. As it turns out, the Hunter Minimus was exactly the fan for which I had been searching.  It’s black, just as I had wanted; it’s modern, which suits the room; and it’s petite, which fits the scale of Wilder’s bedroom perfectly. 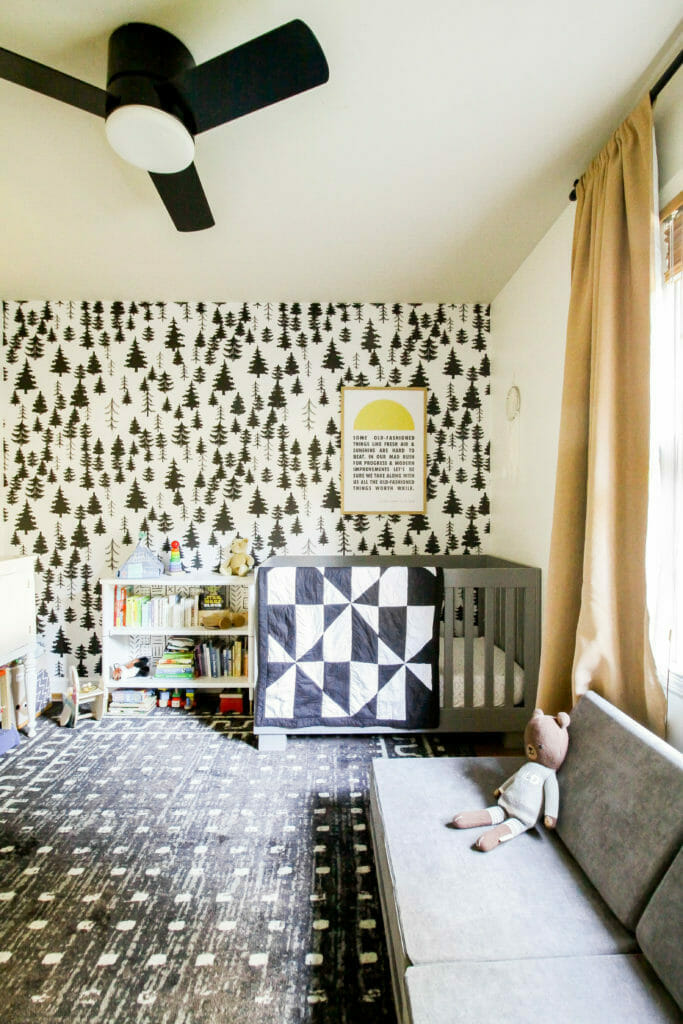 As a bonus, the blades can actually be reversed as well to reveal a rich wood grain on the reverse side.  I wasn’t sure which side I would use but once I saw the black on black paired with everything else in his bedroom I was certain. 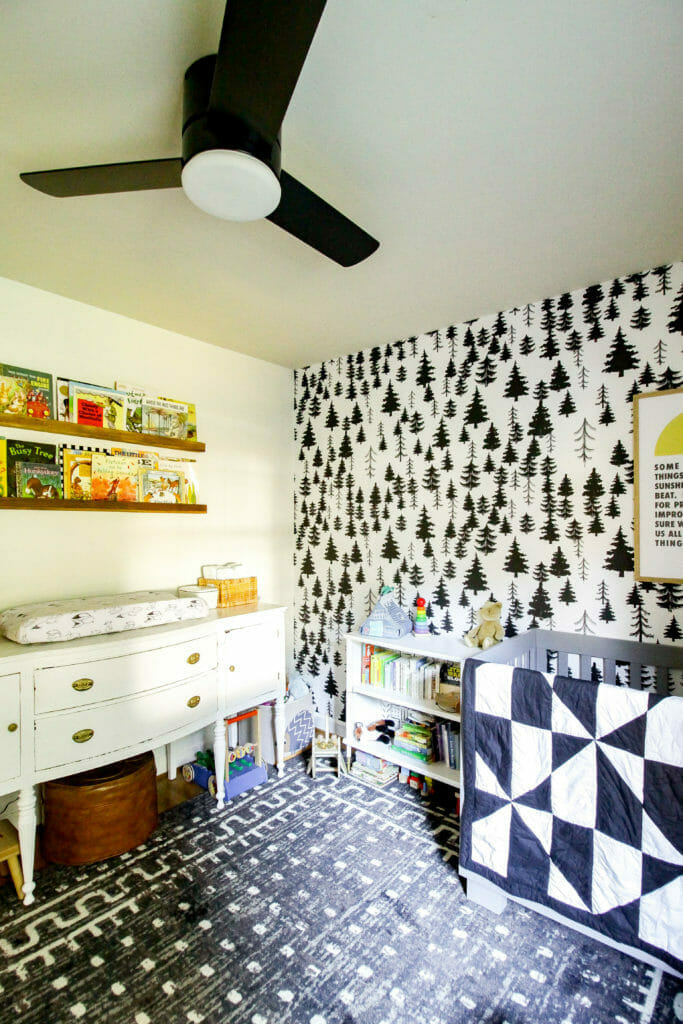 Chris and I installed the new fan last weekend, and to be totally honest, this was relatively easy to hang.  Of course, our opposite methods of communication make any DIY project we tackle together an adventure but that aside, I can confidently say that this fan was the easiest to hang of all that we have done in our lifetime. When we finished with the installation, we both stood back and gasped at what a difference that little detail made in his nursery. (Can a mama still call it that if her baby is an 18 month old walking, babbling toddler? Asking for a friend.)  Now that this ceiling fan fixture has been updated, the view from our bedroom into Wilder’s is a million times better!  I love how the black of the fan plays so well off of the rainbow mural in the hallway and the black forest trees on his bedroom wall. 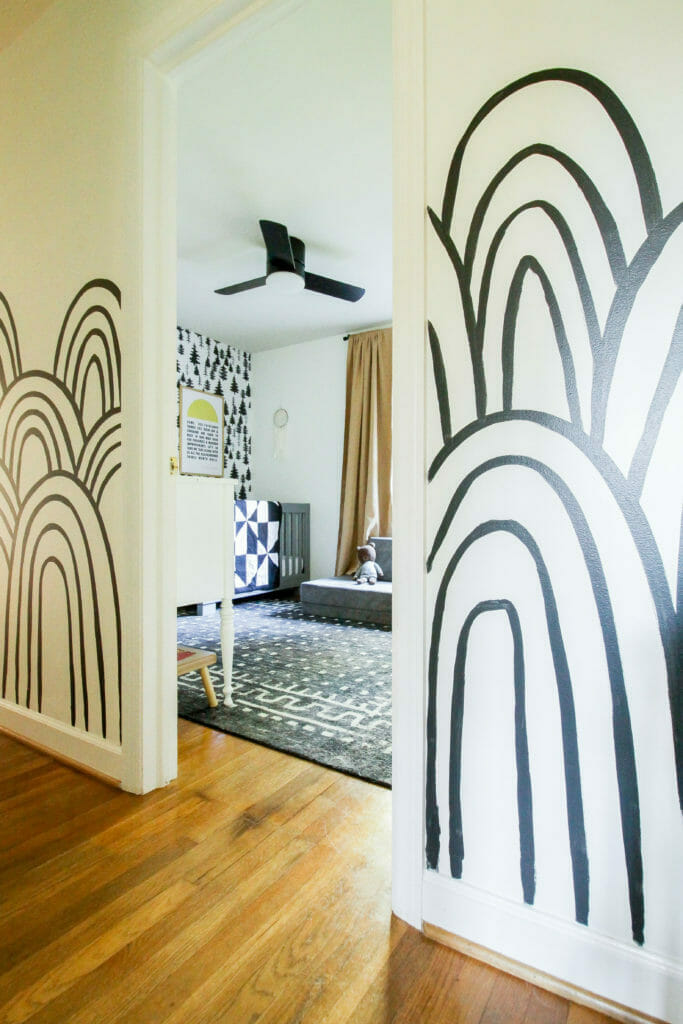 In addition to the style this ceiling fan brings to Wilder’s space, it is incredibly much more functional.  The Minimus fan features dimmable LED lights, and a remote control to select and adjust light or fan (lightyears better than those silly pull chains). Wilder is all about those remote controls, so he’s pretty stoked about that.  Of course, we keep it out of his reach because we don’t need it in turbo speed more this winter! 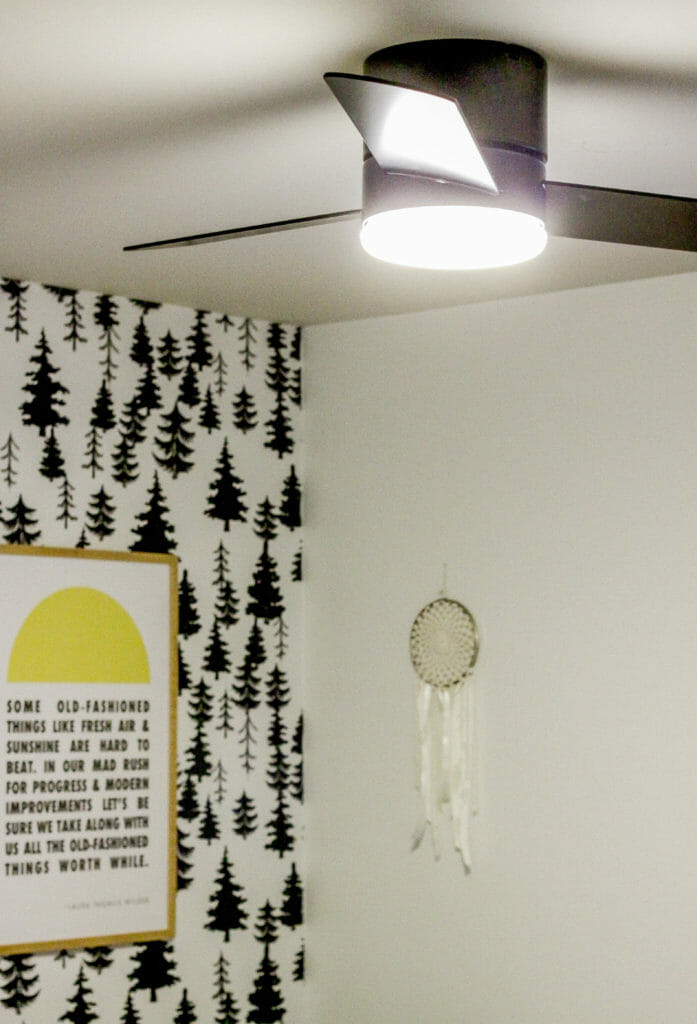 Isn’t it just so sleek looking?  The blades are the perfect length for his ceiling, and the entire fixture only takes up 44″ in diameter.  We also don’t have very high ceilings in our 1966 rancher; they measure just over 8 feet, and this fan fits the height parameters well. 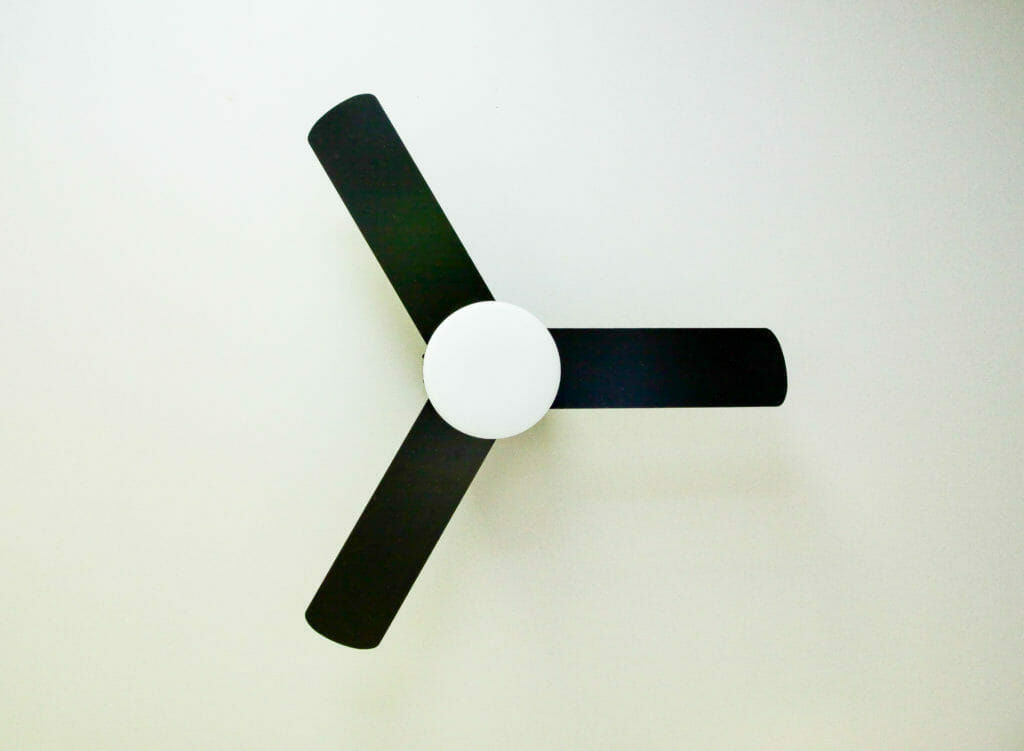 Naturally, we tested it by turning on the fan as well as the light because we needed to know that we had indeed installed it properly.  We were shocked at just how quietly it rotates. With Wilder’s old fan, we weren’t sure if it was going to attempt to take flight on us! 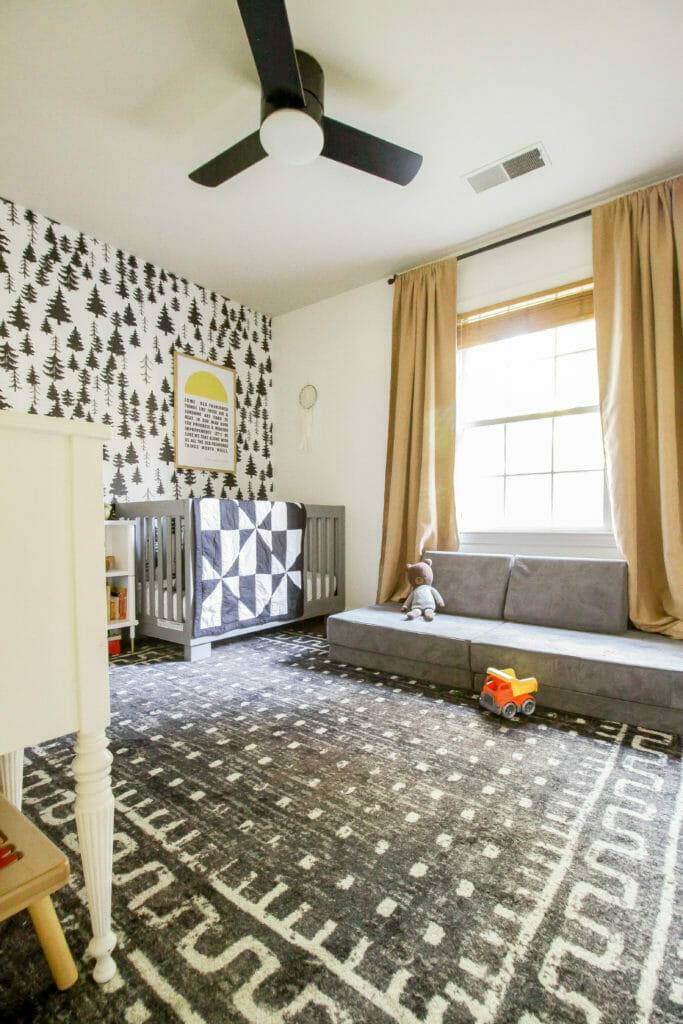 We could not be more pleased with our new Minimus fan from The Hunter Fan Company.  It’s everything that I wanted in a fan for this space and then some!  Isn’t it funny how those details make such an incredible difference in a space?  If, like us, you’ve been living with the ugliness of 1980s ceiling fans, the time to update is now.  Not only will it look a million times better, but it will sound softer, light up in a more eco-friendly way, and offer you a much more comfortable living environment.  Now that we have knocked out Wilder’s ceiling fan, I can’t wait to update the other three bedrooms.  Sit tight, because I’ve got some super unique and stylish fans I will be sharing with you in those spaces. Thanks so much to the Hunter Fan Company for providing me with these fans.