Happy Monday!  Hope you all enjoyed your weekend.  Aside from my car having to go to the shop and changing our plans from it, the weekend was great.  Yesterday we had friends from college over for lunch with their 7 month old baby boy, who is the CUTEST!  He is such a happy guy, too.  I made some pinterest sandwiches for lunch…. spinach artichoke grilled cheese from A Couple Cooks.  I made them for Chris and I last weekend and we really liked them and thought they were worthy enough to share with friends. I used light sour cream, and Brummel and Brown in place of butter, and wheat bread, but they were still DELICIOUS.  It’s like spinach artichoke dip in between two slices of toasted bread.  Here is the picture from the website… So…. there are only 11 days left until Ali flies in from Cali and stays with me for a week!  I CAN’T WAIT!!!!!!!  What does this have to do with this post?  Well, this year we decided to start a little pen pal exchange between our kids so they could get to know each other since we are certain that they will be meeting one of these days!  We wanted to create familiarity.  This past month, Ali’s kids sent my kids an amazingly adorable gnome banner kit that her creative sister-in-law Darcy created.  Darcy sells kits like this in her etsy shop, Smart-Bottom Kids.  Here is the sample of the kit from her shop pictures…

It’s amazing!  The kit comes with EVERYTHING you need but scissors.  All the pieces have the patterns on them, and you just cut following the lines.  I could have let Emmy do this part, too, but I was a little control freakish about that…. Anyhow, once the pieces were cut, I showed Emmy the order for glue for the boys, girls, and toadstools, and let her go to town.  Then she was able to glue on embellishments that were in the kit, such as buttons, flowers and butterflies, sequins, glitter, ric rac and more.  Emmy had so much fun doing this!  Here she is working on it… oh, and the wax paper to work on was even included in the kit! 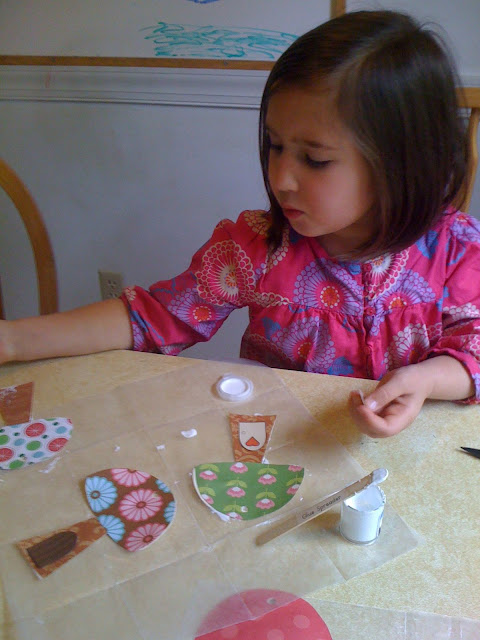 I just love her sweet little concentration face. 🙂  Anyhow, she was very excited to work on this.  We did it over the course of a couple days, so that we could have something to do for a couple of days.  Once she was done with all the glitter and embellishments, I tied them with the ties supplied onto the jute supplied.  And here it is hanging above her bed… 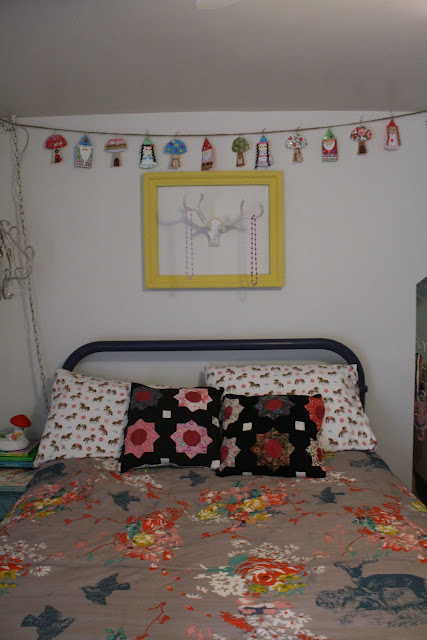 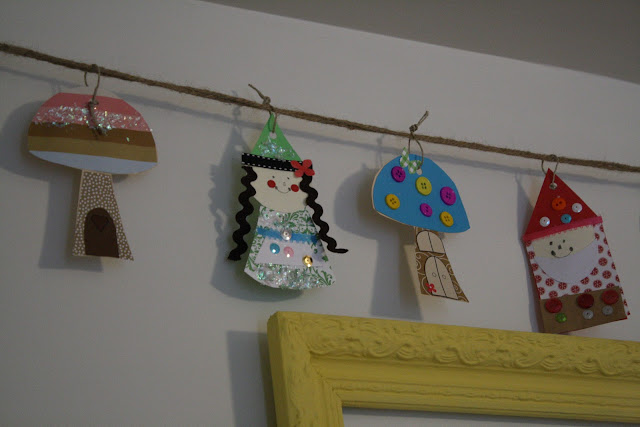 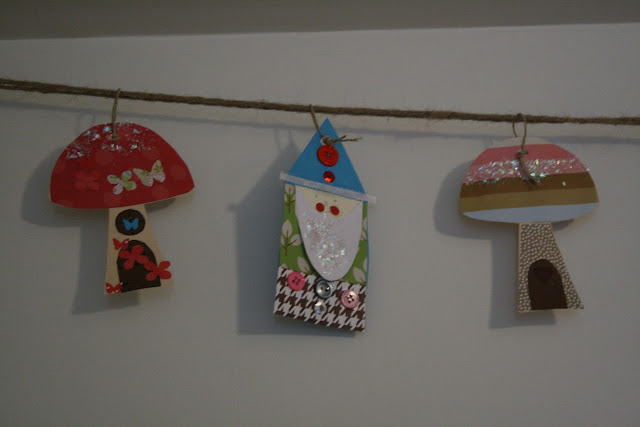 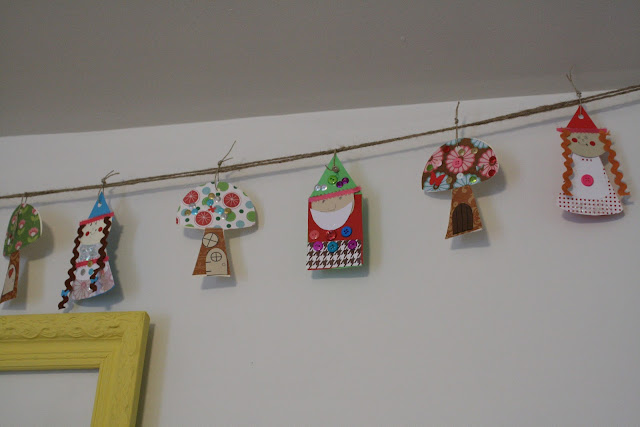 What I really love about this banner is that it is adorable and looks perfect in her room, and Emmy has the satisfaction of having something she created in there.  I think she did a fantastic job, too!

Thank you so much, Ali, Noah, and Hayden!  We love it!  This would be a great summer rainy day project, too!  Smart Bottom Kids has all sorts of fun projects like that…

Here are some of the other fun kits available.  And I am not being paid to promote this shop- I just had so much fun with my Emmy’s banner that I wanted to share this shop with you. 🙂

So much fun for you and your kids!
And you may have noticed something on Emmy’s nightstand in the pictures above.  Or maybe you didn’t because you were looking at the awesome banner.  Emmy has a new music box.  She and I went to a thrift shop with Sarah a couple weeks ago. I found this music box, and though it needed some love, Emmy and I knew it had to be in her room… 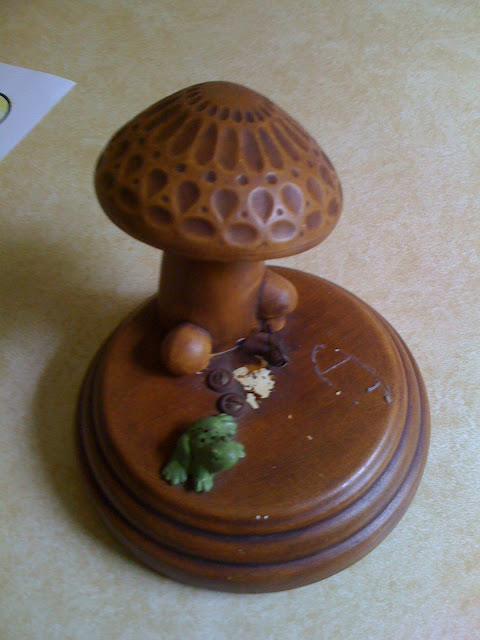 As you can see it was missing a piece, and was pretty, well, brown.  But I thought we could fix it up, and it still played music.  When I was a child I had a music box my grandmother had painted for me.  Mine was a girl in a pink nightgown and she was dancing with a teddy bear.  I used to wind it before I went to bed and listen to the music as I fell asleep.  I told Emmy all about it, and now she winds this one before bed.

But of course, it got a makeover!  I primed it with a spray primer, and painted it with more fun colors.  I also glued on one of her snail figurines that fit well and covered the spot where a piece was missing.  Here it is on her nightstand… 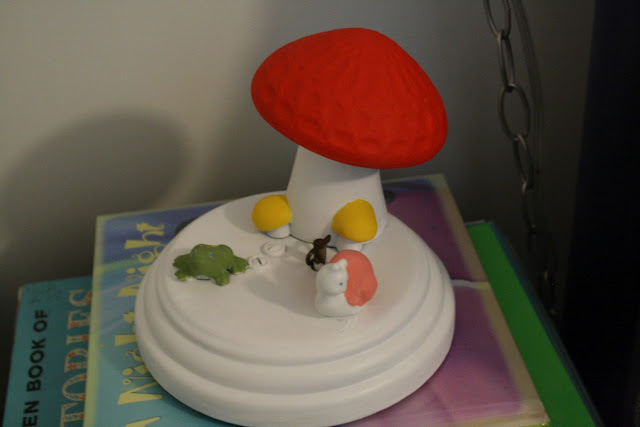 And yes, she winds it before she goes to sleep. 🙂

And now, just to end this post with a funny picture…. Here’s Sawyer.  When I asked him what he was doing, he said he was being a ninja.  I thought it was funny so I snapped a picture. 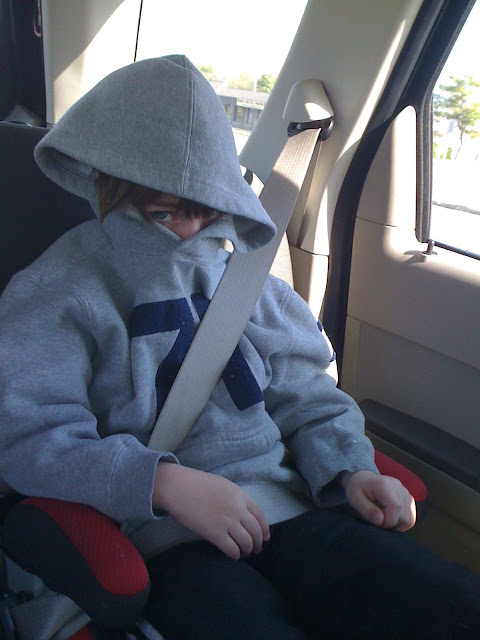 After I took the picture he asked to see it.  His response, “Wow, that is so cool!  I am a ninja!”
And I will leave you with that.  Happy Monday!

« May Flowers, Maybe May Before, and Scentsy Winner!
Color My World Party Features »