Happy Friday!  This week has been an odd one… the weather has been finicky, I’ve struggled for no reason to take any weight off of what I’ve gained(scientifically speaking I should be losing…. but nope); and I was ready to start painting my hallway and staircase but the paint went on sale yesterday, so I had to wait since I am buying 5 gallons and every penny counts.  All in all, it’s one that basically was intended for progress on all accounts, but not much actually happened.  I am trying not to let it get me down, and am headed off for a fun mother-daughter weekend in Lancaster, PA with my mom.  It will be a nice distraction for sure.  Speaking of lovely distractions, I wanted to take a moment to share with you some random things I am loving from the design/DIY world, foodie land, as well as some movies, podcasts and Netflix series. (If you pin, please pin from the original source. Affiliate links included for your convenience).

My friend Emy recently made over her stairs and accidentally ordered two different runners, but what a happy accident!  It’s colorful, eclectic, and fun.  She also created those fabulous railings you see and a tutorial is coming, she promises. 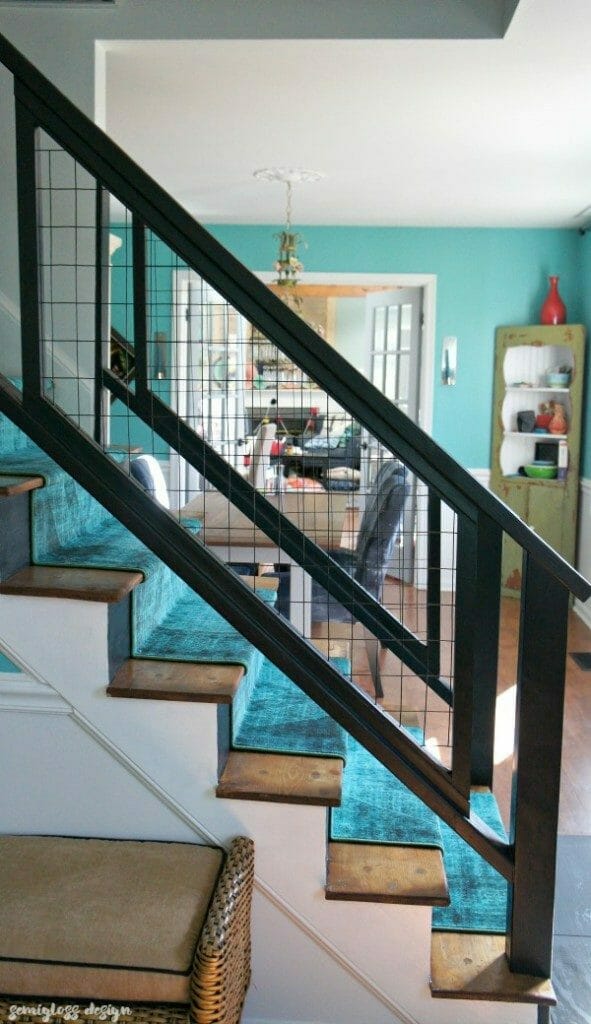 Last week I participated in the Hello Spring Tour (I shared my boho Spring porch), and hands down my favorite home on the tour belongs to Erica of Designing Vibes.  Check out this peek into her dining room with that beautiful piece of DIY art. 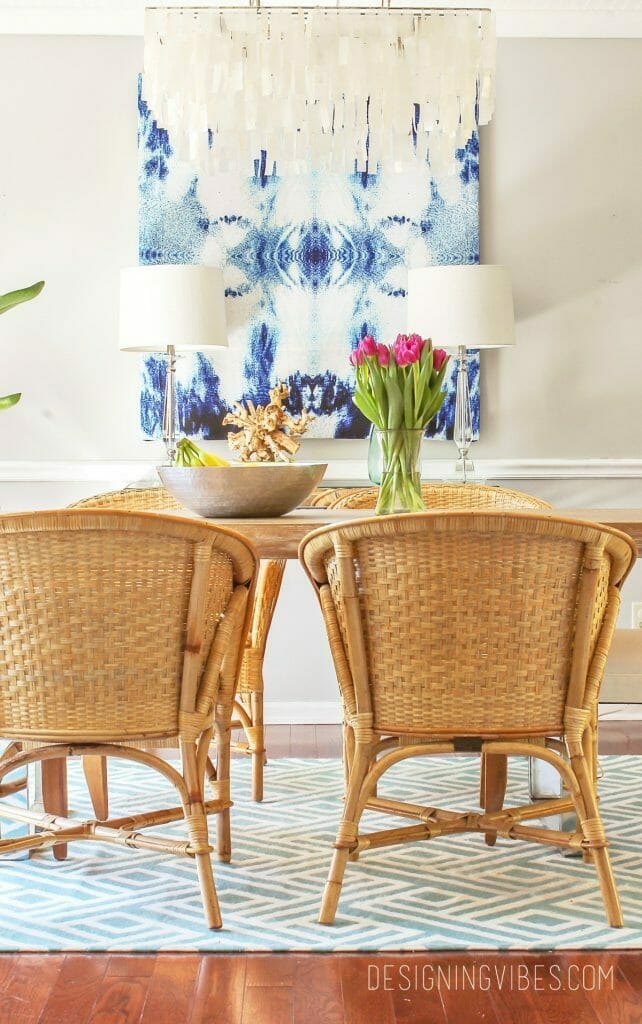 I’ve mentioned before how much we struggle with food with Sawyer.  He’s a stubborn one!  Lately instead of focusing on the bigger picture and fighting with him about dinner meats or veggies, I took a step back and decided to make baby steps forward.  With his help in selecting recipes, we’ve tried several gluten free and all natural dessert recipes as well as a healthier crepe recipe.  They’ve all been winners, and with him, the point was just getting him to try something new that included ingredients he won’t normally eat on their own. Chocolate Covered Katie has become our go-to blog for all things dessert as her recipes are healthier, more natural version, but also mighty tasty!  We started a few weeks ago with Chocolate Covered Katie’s mini snowball donuts.  (I used unsweetened vanilla almond milk for the milk of your choice). My parents had given the kids this donut pan (but we have the full donut instead of mini version) and it was perfect.  We used extra batter to make some mini cinnamon sugar donut “holes” in a mini muffin pan. 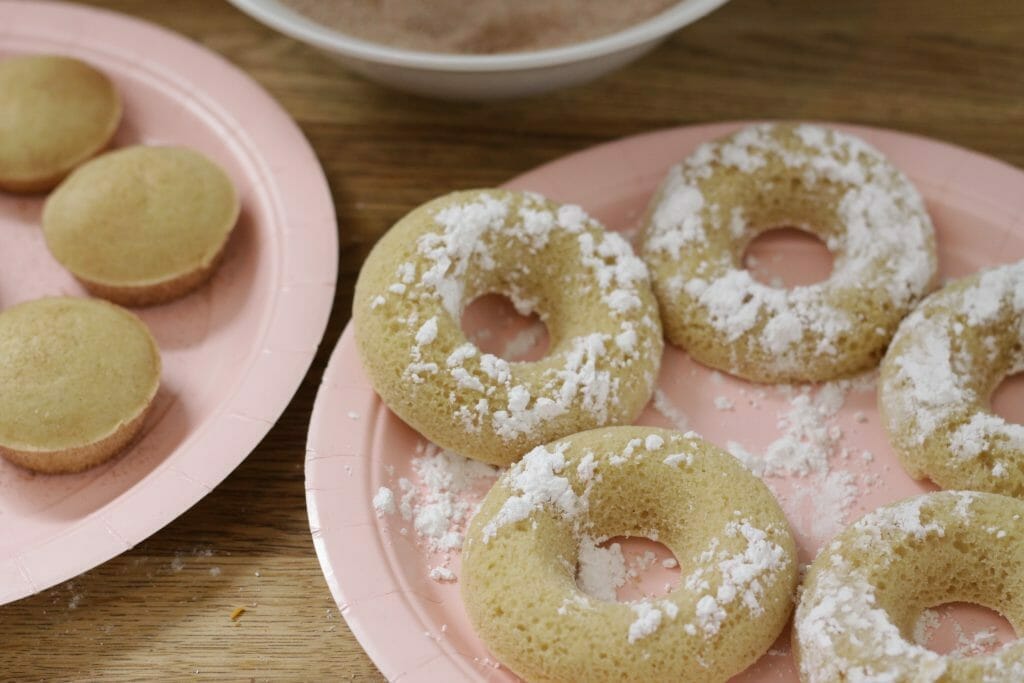 And here is the happy boy’s reaction… 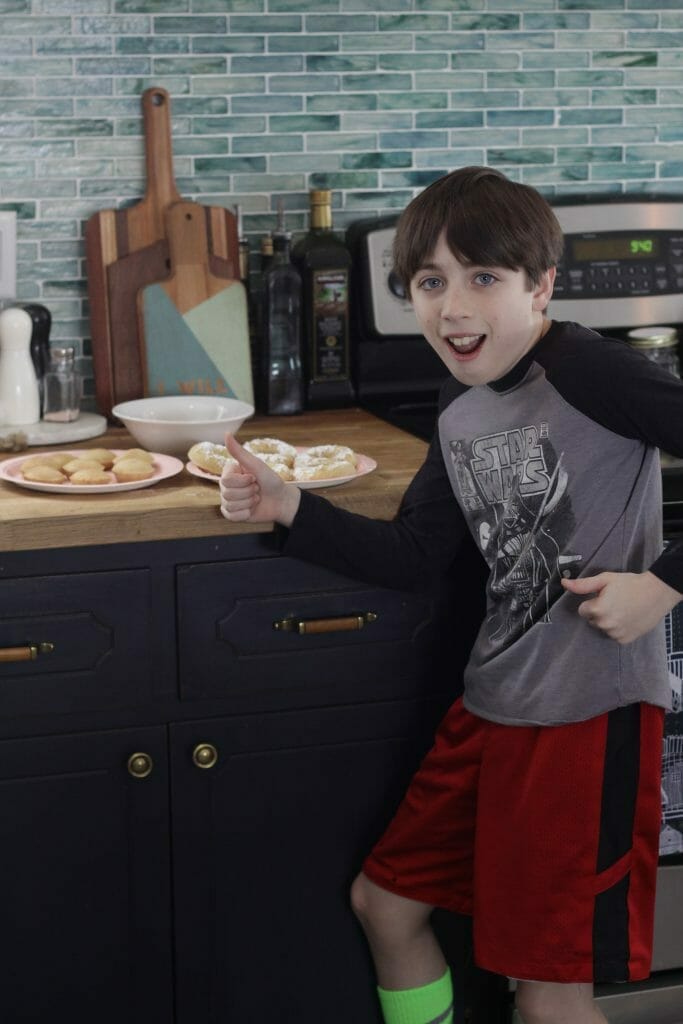 We’ve also tried these marshmallow chocolate chip cookies which we liked, but made our own oat flour so they were a little harder to put together as it wasn’t as fine as it needed to be.  I’ve since bought oat flour so we can try again.  Our favorite so far though has been these fudge oat bars that have only natural sugar in maple syrup, and we used almond butter in place of peanut butter.  Sawyer pretty much devoured these bars!

Aside from desserts, we also made these crepes but left out the sugar so we could make them savory for dinner and I used almond milk for the liquid.  Sawyer was simple with just cream cheese in his, but he liked the actual crepe, so I take it as a win.  Chris and I made our own fillings… mine had asparagus and mushrooms, and i added a poached egg on top.  Emmy prefers hers rather plain with scrambled egg inside.

These are all the tiniest of steps in our food battle with Sawyer, but progress is progress.  He would NEVER eat almond butter or drink almond milk, but now he’s eating it in these recipes.  He’s willing to be a little more experimental with these things, so maybe that will lead to more opportunities.

Now let’s talk about what’s been entertaining me these days.

I spent Monday laying in my bed working on taxes and writing blog posts while I binge watched the Netflix series 13 Reasons Why.  I had actually never read or even heard of the book, but I’d like to read it now.

This 13 episode series tells the story of 17 year old Hannah Baker, after she’s committed suicide, yet through her own voice.  She’s made 7 tapes, using 13 sides, to tell the 13 stories about classmates and so called friends who led her to the ultimate decision to take her own life.  The tapes are left behind with a friend and a note, asking him to pass the tapes on to the person on side 1… that person listens to them all then has to pass them on to the person who was on side 2 and on and on.  At the time we see this happening, Clay Jensen, number 11, is listening.  He had been in love with Hannah but too afraid to let her know.

This series contains graphic depictions of hard life things that teens across our country face every day.  High school is supposed to be all about having fun with your friends and finding out who you are, yet so many of these people we see in this series are left feeling alone.  I cried my eyes out at several scenes because I watched this as a mother who will have teenagers before I know it.  As I watched, all I could think about is how things need to change in our society, and that starts with us and how we parent our children.  I watched it and knew I made the right choice for me to be home and here for my kids.  I want them to know that no matter what, I am here to help and not judge…. life is messy and I’ve made my fair share of mistakes and am in no position to judge them anyhow.  Our kids need to know they’re loved and accepted for who they are, and they need to learn to accept others who are different from them.  I’ll stop preaching now, but if you have kids, watch this show.  If you have teenagers already, watch it with them and open the discussion and let them know you are always there… no matter what they might think they’ve done.  Gosh, I’m crying as I write this, but I can’t imagine being Hannah’s parents and I never want any of us to be in that position.

The show also features amazing music, and I’ve been listening to this one on repeat:

Do you guys listen to podcasts?  I love to listen while I work on projects around the house, and I love intensely thrilling stories for running on the treadmill.  These are some of my favorites.

S-Town: (true crime) From the website, “John despises his Alabama town and decides to do something about it.  He asks a reporter to investigate the son of a wealthy family who’s allegedly been bragging that he got away with murder. But then someone else ends up dead, sparking a nasty feud, a hunt for hidden treasure, and an unearthing of the mysteries of one man’s life.”  This story had murder, mystery, and also told a story of a man who never felt like he had a place to fit in this world.  It was interesting and emotional.

Up and Vanished: (true crime) This podcast investigates the disappearance of Georgia beauty queen Tara Grinstead, who disappeared in 2005.  As the podcast progresses, actual case progress happens as well, including an arrest.

Rabbits: (fictional mystery/sci-fi) This podcast is brought to us by the people who are responsible for The Black Tapes and Tanis (two of my faves!), and has a similar dark mysterious vibe.    Carly Parker is searching for her friend Yumiko who disappeared from her home.  Carly discovers an ancient game, Rabbits, Yumiko may have been playing and delves deeper into researching the theory that her disappearance has to do with the game.  (This is the kind of podcast I can actually run to).

And lastly, to end this post on a lighter note, I’ll share with you a movie I loved that surprised me.  Last Friday my kids had the day off, and it was also the release date for the Power Rangers movie.  Sawyer really wanted to see this movie, so I decided to purchase the VIP tickets at a local theater during the day.  (Don’t be impressed… they’re only $7.50 each, but they are so comfortable and a total movie-viewing treat!).  I knew Sawyer would love it, I thought Emmy would like it, and I, well, I was just along for the ride…. so I thought.  I LOVED this movie!  It’s a little action, teen relationships with parents and peers, and it even features a favorite actress of mine, Elizabeth Banks, as Rita Repulsa.  I left the theater shocked at how much I enjoyed it.  Here are the kids, pre-movie, thrilled about their comfy reclining seats. 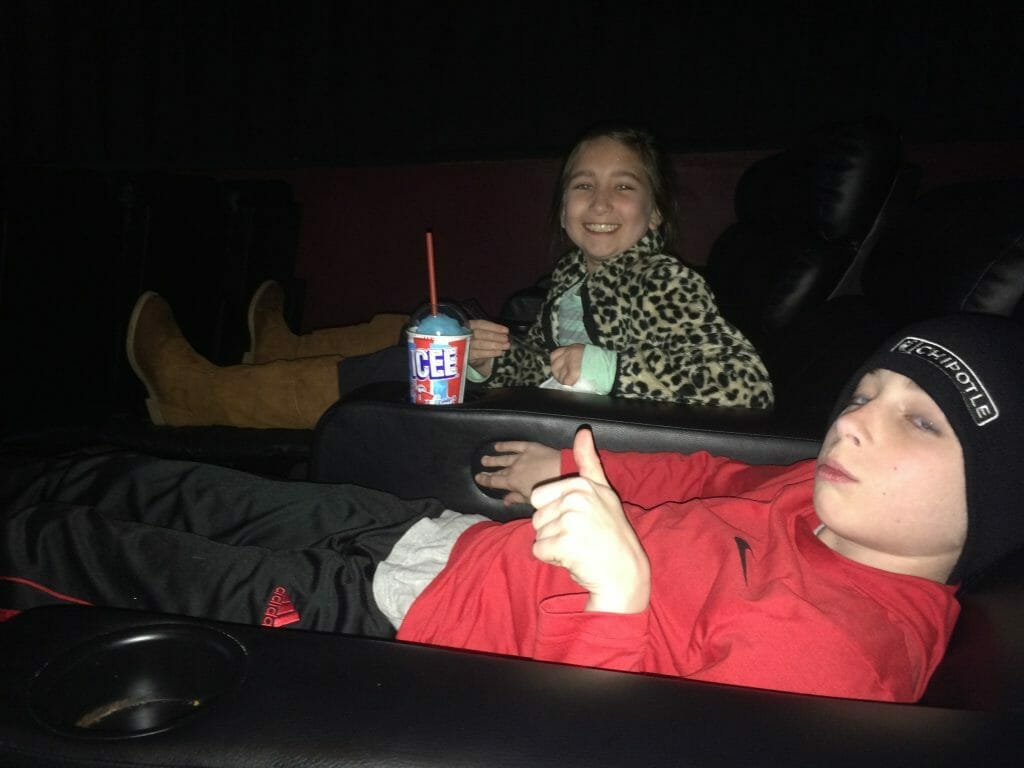 Well, that was a long-winded list of things that are making me smile these days… Hopefully you’ve found something new to try from all the things I am loving.